The Thunderbirds (official name: USAF Air Demonstration Squadron) are the official aerobatic team of the US Air Force. They fly six F-16C/D Fighting Falcons and have performed around the world, representing the United States. The team are based at Nellis AFB near Las Vegas. The Thunderbirds were established as a formal aerobatic team in 1953, making them arguably the third-oldest military aerobatic team still performing today after the Patrouille de France and Blue Angels. They were known as the 6300th Air Demonstration Team and flew four F-84G Thunderjets. In 1954, the team added a fifth jet, which performed solo manoeuvres during the display, and made their international debut during a tour of South and Central America. In 1955, they upgraded to the F-84F Thunderstreak, followed by the F-100C Super Sabre in 1956. The emphasis of the show was on low, fast passes, and the team would often create a sonic boom as part of their act until this was banned later in 1956.

In 1959, the Thunderbirds performed a one-month tour of East Asia. 1962 saw the addition of a second solo jet, bringing the total number of aircraft in display to six. It was followed by their first European tour in 1963 and a switch to the F-105B Thunderchief in 1964 – although a fatal accident saw them revert to the F-100 (this time the D variant) after only six shows.

The Thunderbirds typically use their C model F-16s for public air displays. Their display sees four aircraft, known as the Diamond, performing formation aerobatics, alternating with synchronised and opposition aerobatics from the two solo pilots. The Diamond are known for their extreme close formation flying, with minimum wingtip-to-canopy separation of just 0.5 metres. All six aircraft join together for several five- and six-ship manoeuvres towards the end of the routine. Manoeuvres include: 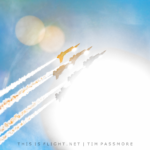 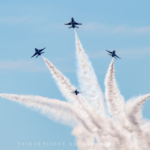 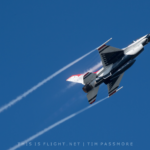 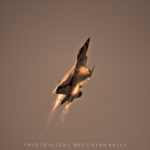 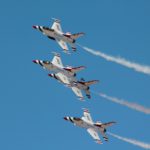 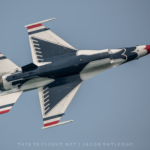