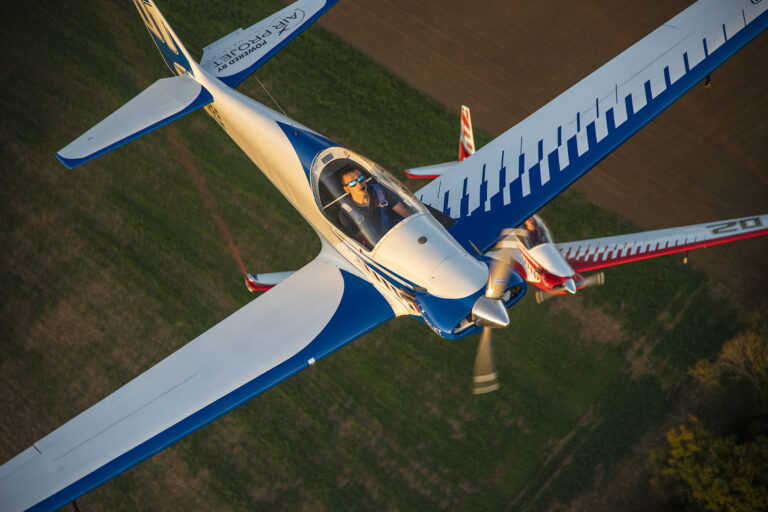 The Dijon-based team has spent two years renovating a pair of vintage Fournier RF-4Ds, one of which flew with the original Skyhawks team.

The Skyhawks, initially known as the Unipart Duo, were founded in 1983. They later displayed three aircraft until they were disbanded in 1992. The team was renowned across Europe for their extremely tight, accurate and graceful line-abreast aerobatics, aided by photogenic wingtip smoke, and for particularly challenging “mirror” formations, with the inverted aircraft flying “deadstick” as the RF-4’s engine has no inverted fuel system. With just 39 horsepower per aircraft, the exceptionally challenging display was famously performed to the accompaniment of a Pink Floyd soundtrack, referencing the fact that several of the team’s pilots had taught members of the band to fly.

Alternative Duo hope to return this spectacle to the airshow circuit, whilst also forging their own identity as a one-of-a-kind aerobatic team.

The idea for the new team began in late 2020, when French aero-engineering company Air Projet purchased an ex-Skyhawks RF-4D to restore at their base in Dijon. The decision was soon made to purchase a second Fournier and display the pair at airshows. Their first display came in September 2022 at a private event marking the 101st birthday of the RF-4’s designer, René Fournier – at that point, the unnamed team’s existence was not public knowledge. Revealing themselves and their name one month later, they are now looking to secure bookings to display at public events next season.