After eight years, the sights, sounds, and smells of an airshow surrounded Dover Air Force Base once again. Located in Dover, Delaware, along the East coast of the United States, Dover is home to the 436th Airlift Wing with C-5M Super Galaxies and C-17 Globemaster IIIs at their disposal. This wing alone accounts for 25% of the nation’s inter-theater airlift capability, providing round-the-clock mobility anytime, anywhere. 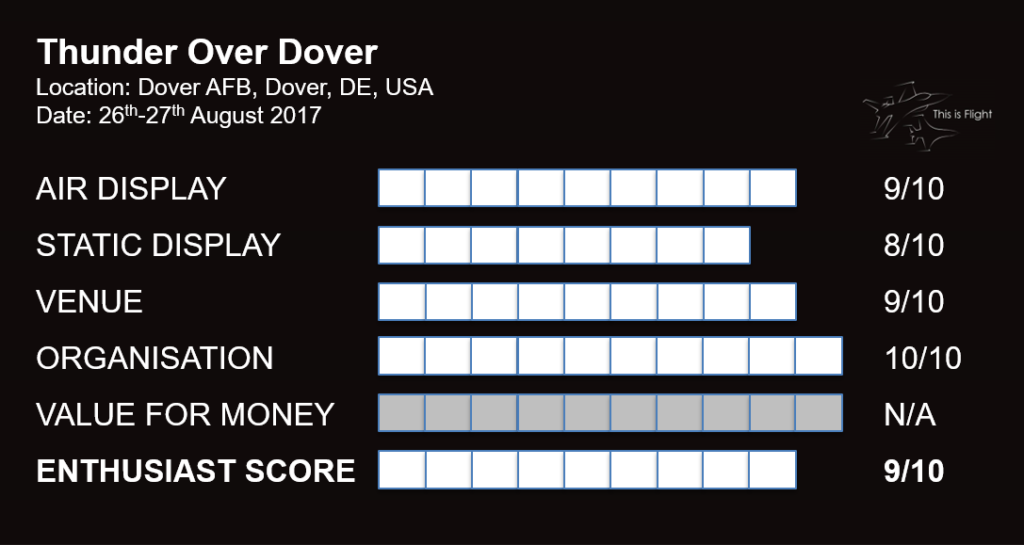 The headliner for the airshow was the US Air Force’s aerial demonstration team, The Thunderbirds. Leading up to the six red, white and blue jets would be a phenomenal lineup including both civilian and military acts. The performers slated to take to the skies included the Black Daggers parachute team, a search and rescue demonstration by the US Coast Guard, the Wings of Blue Air Force Academy jump team, Prowlers of the Pacific from the Commemorative Air Force, the Warrior Flight Team, Air Force Academy Glider display, Art Nalls’ Sea Harrier, B-25 ‘Panchito’, de Havilland Vampire, a host of solo aerobatic displays and fantastic demonstrations by aircraft from the base’s own C-5 and C-17 fleet: a fast, fun-filled lineup that encompasses almost every facet of aviation. 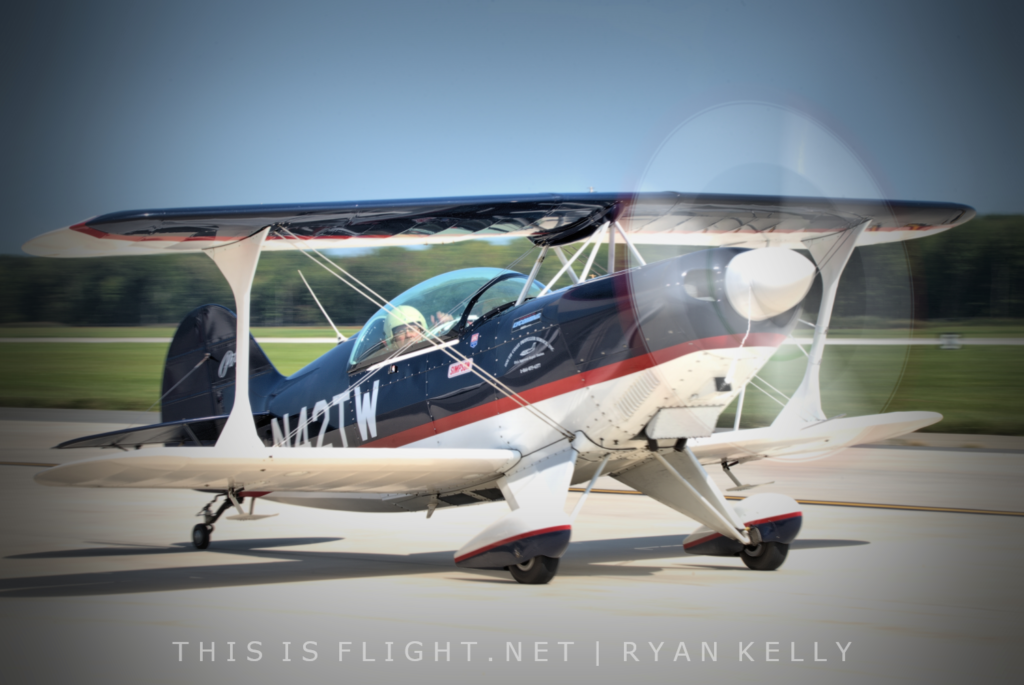 The show opened with the Black Daggers jumping from a C-130 from the Delaware Air National Guard. Clemens Kuhlig circled the jumpers in his Chief Pitts as they floated down to land carrying the American flag. Skip Hyle took to the skies next in his beautiful T-6 Harvard, the Canadian variant of the North American T-6 Texan. The camouflage-painted radial aircraft was flown beautifully through barrel rolls and loops, with the distinctive sound of the propeller tips breaking the sound barrier filled the air. Following the heavy metal Harvard, Keith Davis took to the sky in his Pitts S-2B and show off the aerobatic capabilities of the world-famous aircraft. This was followed by an impressive parachute jump by the US Air Force Academy Wings of Blue. Later in the day, the Academy also displayed a TG-16 glider in a graceful but entertaining display. 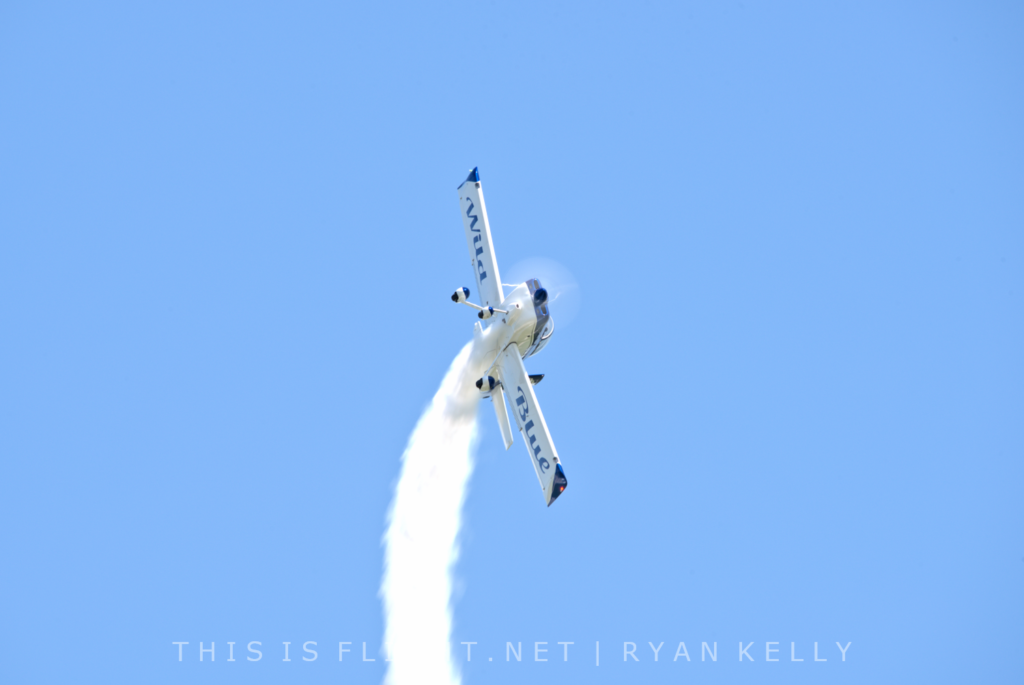 Ex-Thunderbirds pilot Jerry Kerby was next, showcasing the aerobatic capabilities of Vans RV-8A “Wild Blue”. After the little blue and white “fighter plane”, the US Coast Guard flew in from Atlantic City with their specially-painted centennial scheme MH-65 Dauphin to demonstrate what a search and rescue would look like, and the amazing capabilities of the Coast Guard pilots to maintain a hover. 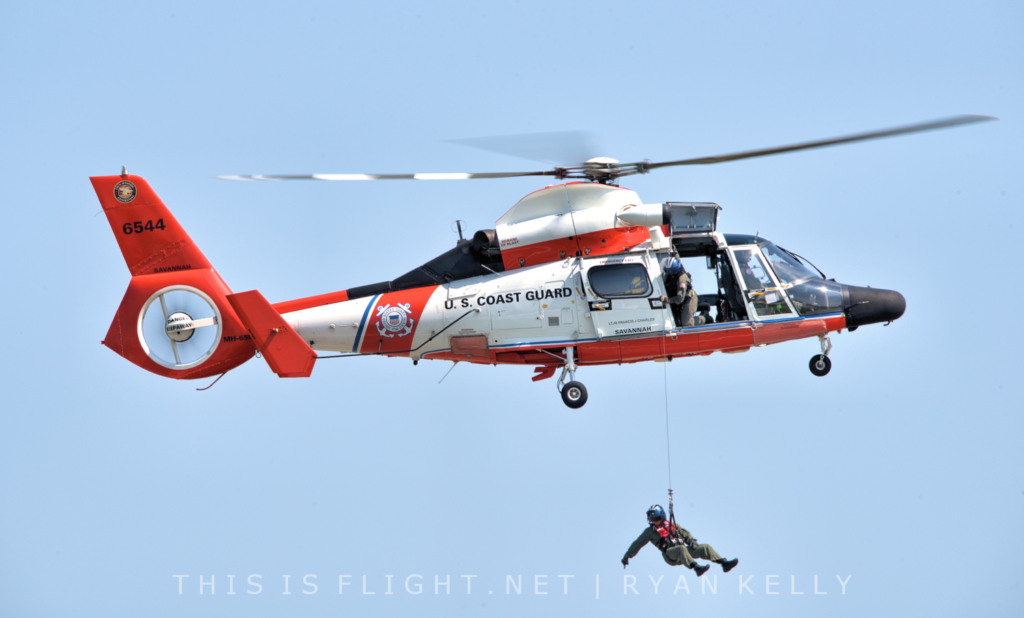 Warbird flypasts came courtesy of the Commemorative Air Force and Military Aviation Museum, who brought their SBD Dauntless, Nakajima B5N Kate (replica), FG-1 Corsair and FM-2 Wildcat. After multiple passes, the Corsair broke out of the circuit to circle behind the crowd and dive in to the air show box for a full demonstration. This Corsair was fresh out of restoration and proved that it was happy to be back in the air once again! The display included plentiful topside passes, pleasing the many photographers in attendance. Once the Corsair had landed, one of the most anticipated aircraft of the show performed several passes: a USAF B-2 Spirit. A flying wing design almost akin to a UFO, the B-2 was surprisingly loud for a stealth aircraft, but streamed through the air with much elegance and a sense of intimidation. 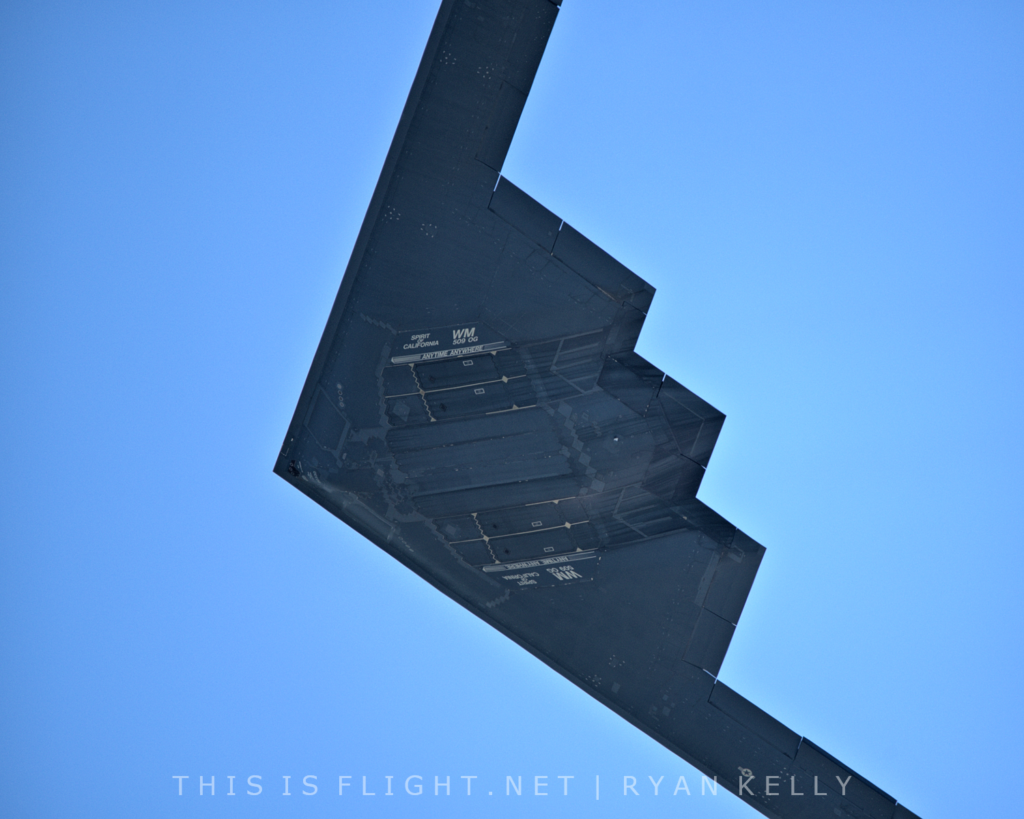 Once the stealth tactical bomber had departed the airspace, the show took a step back into history as the Commemorative Air Force’s P-51D Mustang “Red Nose” roared down the runway, the sound of its Rolls Royce Merlin engine reverberating around the Dover skies. The sun shined on the beautiful aircraft as she made several passes, brightly illuminating every surface in stunning natural light. Up next, the 166th Air Wing from the Delaware National Guard showcased the short field landing capabilities of the venerable C-130H Hercules, a turboprop aircraft that has been in the USAF inventory for decades and used by multiple allies around the world. 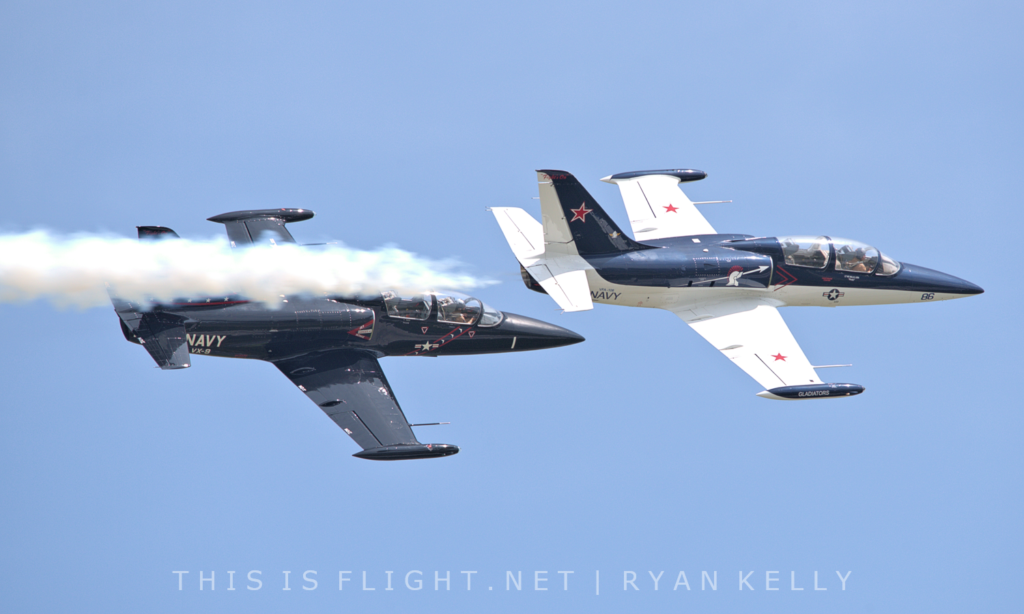 Jacquie B was next to take to the skies in her Extra 300 with a unique routine coupled with a unique aircraft, markings on which change colors as she flies by. The Warrior Flight Team were next, taking to the skies with their two L-39 Albatross in the hands of Mark Burgess and Bill Mills, who flew the F-14 Tomcat and F/A-18 respectively. The show is a blend of tight formation flying and a mock dogfight, designed to show off the maneuverability of the Czech-designed aircraft. Another classic jet at the show was Jerry Conley’s de Havilland DH-115 Vampire, a first generation jet aircraft developed for the Royal Air Force during World War II. The jet’s RAF markings and camouflage stood out beautifully against the blue sky. 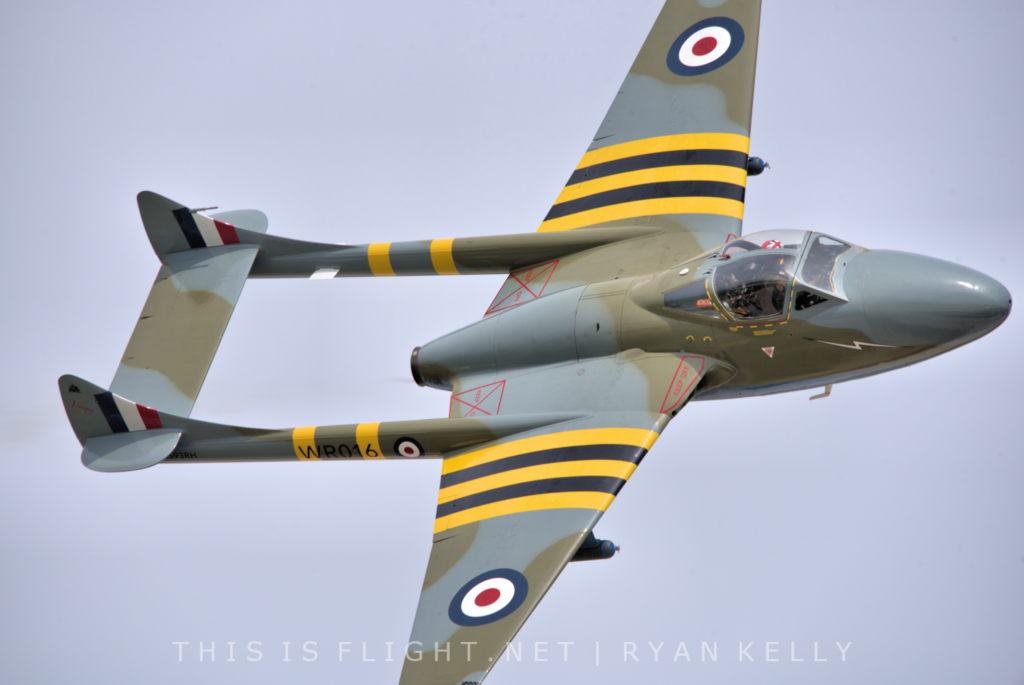 After the Vampire made a series of fast passes and taxied in front of the crowd, Stephen Covington’s “Viper Pitts” took to the air. A mean looking paint job on the aircraft was coupled with some incredible aerobatics that I believe could be among the more aggressive I have seen. After the familiar sound of a Pitts engine, radial would fill the air once again as the gorgeous B-25 Mitchell “Panchito” brought the crowd back to the days of World War II. One of the most attractive B-25s out there, Panchito is nearly all polished aside from standard markings and the art on the aircraft close to the nose. The display included an entertaining mix of high speed and topside passes as well as one with the bomb bay doors open to show the business side of the B-25. 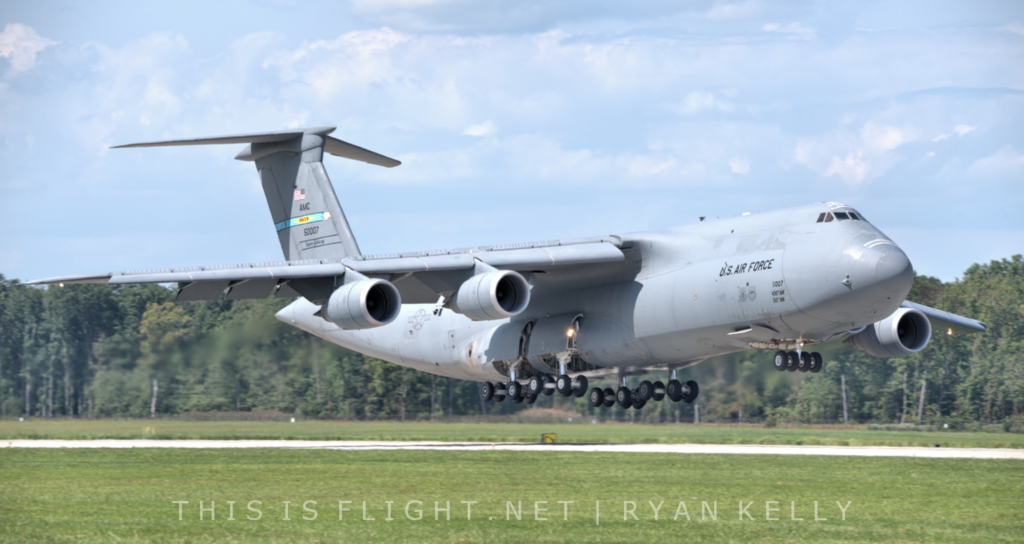 Heavy metal from Dover would give the hometown crowd a display from both the C-5M Super Galaxy and C-17 Globemaster III. The tactical demonstration of the highly maneuverable C-17 gave everyone a glimpse of how agile an aircraft of its size can be. The second treat of the show would be when the mighty C-5 gave a photo pass, banking to the left and releasing flares, giving the impression of firing raining down from the aircraft. A personal highlight of this show was Art Nalls’ Sea Harrier. The former British aircraft is a bit smaller than the AV-8B Harrier the US Marine Corps flies, but every bit as maneuverable. A series of high speed passes followed by a demonstration of the incredible hovering capability of the Harrier showed old technology can still be a spectacle to behold. After a “bow” to the crowd by the Sea Harrier – a signature finale to Harrier displays ever since the type entered operation – Art descended the jet vertically, bringing the aircraft slowly back to earth to complete his performance. 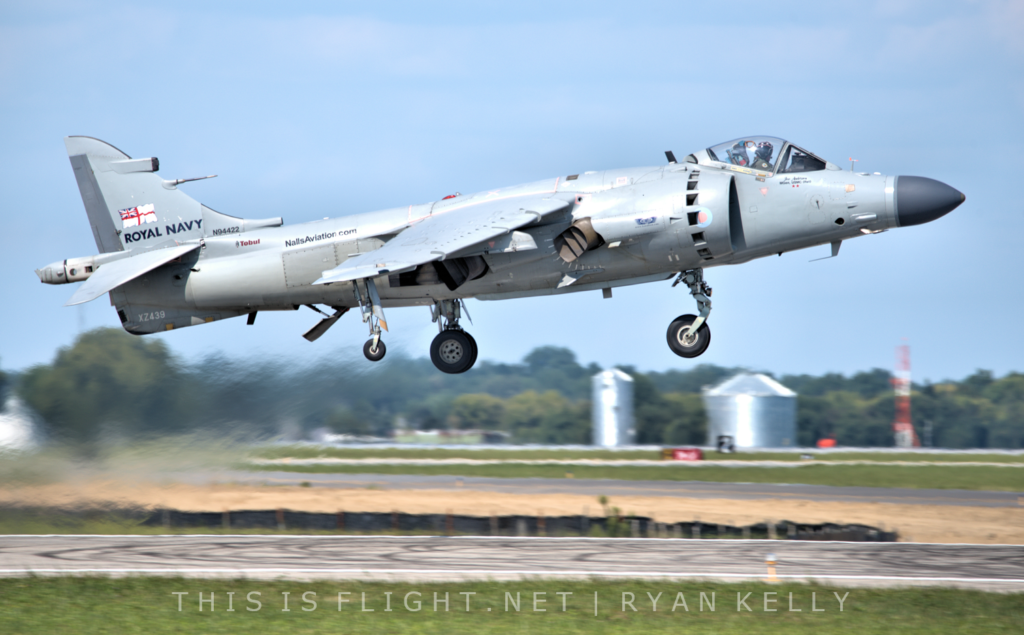 Up next, the Thunderbirds! The team’s six iconic F-16C Fighting Falcons wowed the crowd with thirty minute display of grace, muscle, and beauty as the finale to the show. Thunderbirds 1-4 (the Diamond) primarily perform graceful and precise formation flying, while the solos (5 and 6) display the more aggressive and dynamic capabilities of the aircraft. Seeing the Thunderbirds multiple times, I am never disappointed when they fly. Among the most exciting maneuvers are the sneak passes, when an aircraft approaches the crowd while their attention is drawn elsewhere, surprising them with a noisy high-speed pass. It helps that the F-16 is remarkable quiet as it approaches, and so you don’t hear the jet until it is right in front of you at high speed!

This reporter attended the show both days on Saturday and Sunday, and truly enjoyed an action packed and stacked lineup. A huge thank you to all of the volunteers, the Public Affairs group, and the entire team at Dover for putting a truly wonderful event together. I hope to attend a show at Dover again in the near future that was as well planned and executed as this one; the Dover team got it right.