This year is expected to be an exciting year for the Royal Navy, especially with the recent commencement of HMS Queen Elizabeth’s sea trials and the current testing of the new F-35B Lightning II in the United States. With the cancellation of RNAS Culdrose Air Day earlier in the year, the Navy’s only remaining airshow was tasked with showcasing the rapid development and future prospect of the Fleet Air Arm, to the 40,000 visiting spectators. 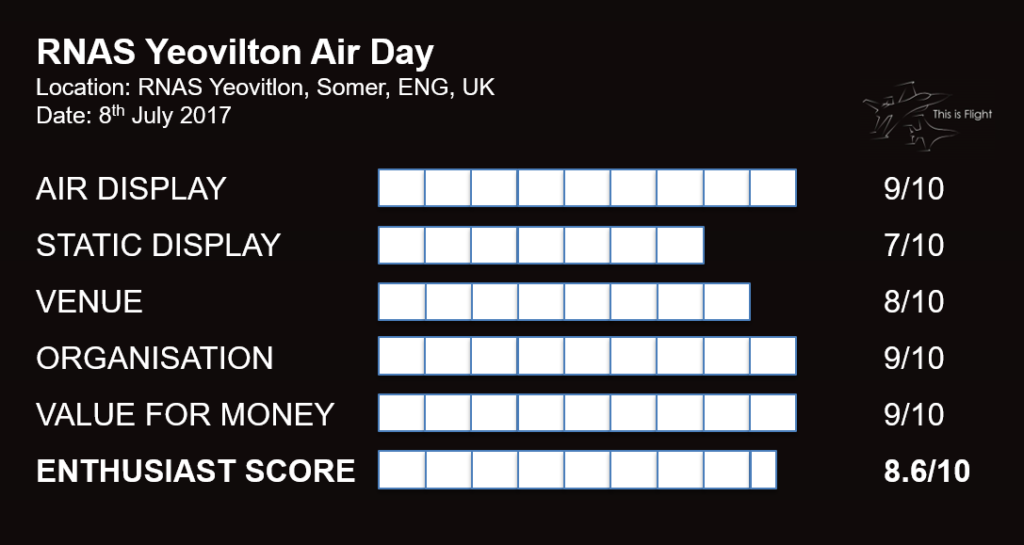 Despite this, there was surprisingly very little support from the Royal Navy in the flying display. Due to the current transition of the Commando Helicopter Force, there was sadly no Commando Assault Finale for the first time in 40 years; something that is always undoubtedly a highlight on the UK airshow circuit. Sorely missed, it is hoped that Yeovilton’s iconic set-piece will return next year. Nevertheless, the Navy did supply a Merlin HM2 from RNAS Culdrose, as well as the Maritime Role Demo, comprising of two Wildcat HMA2s. With 1 Regiment now being based at Yeovilton, it was also appropriate to see some form of contribution from the Army Air Corps, with the Attack Helicopter Display Team’s WAH-64D Apache AH1 providing an impressive spectacle. 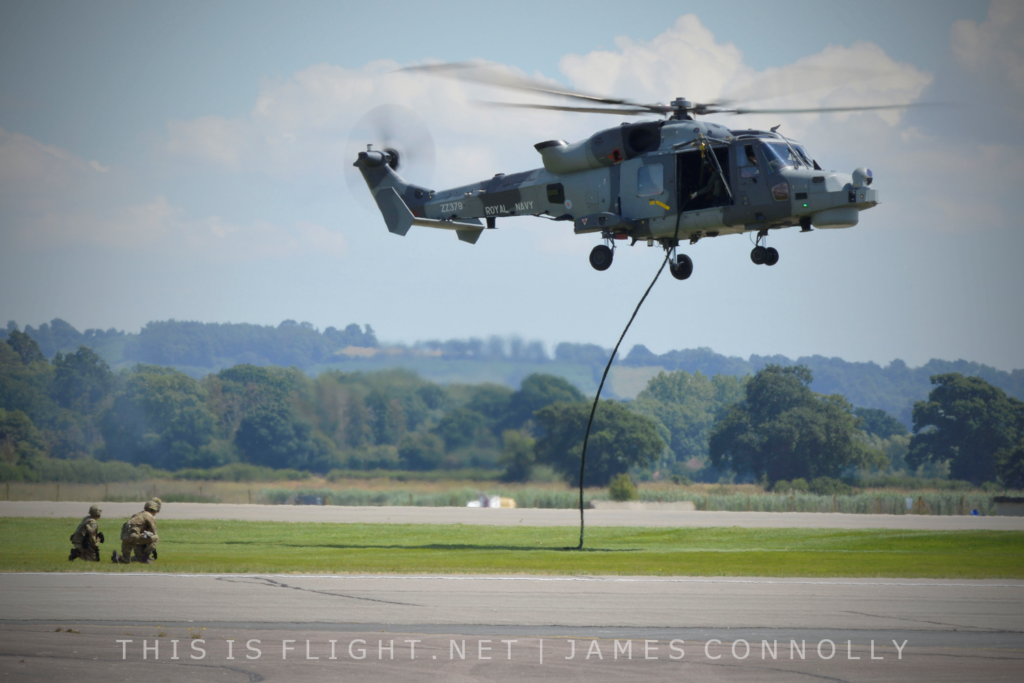 This year’s static park felt slightly smaller in comparison with previous Air Days, due to noticeably fewer participants. However, it is worth mentioning that there were some noteworthy items, including a rare appearance by a Boeing C-17A Globemaster III from the 315th Airwing Lift of the USAF, based at Charleston. The Belgian Air Force also provided a static example of the Lockheed Martin F-16AM Fighting Falcon from 1 Sqn; to celebrate the squadron’s centenary, this example of the F-16AM has been given special markings. However, it seems that the organisers have chosen to ignore the repetitive calls for the barriers to be moved further back from the static aircraft, to allow for improved photographic opportunities. Other than this, I cannot fault the organisation of the event, with a smooth entry and departure onto and out of the airfield. 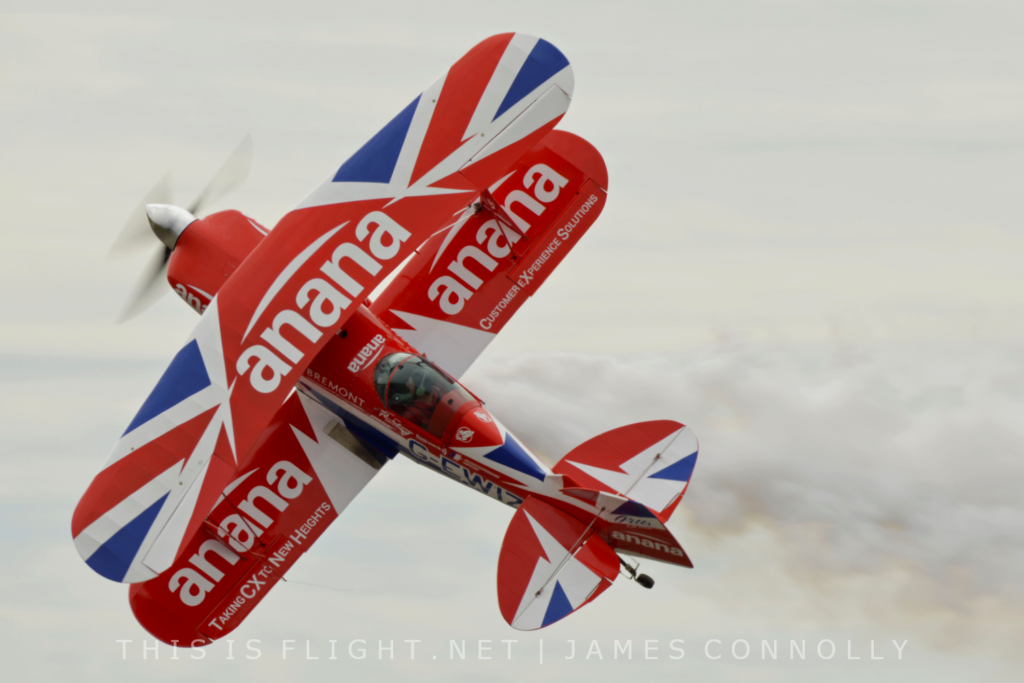 Yeovilton Air Day has always prided itself on welcoming a variety of both military and civilian aircraft, whether in the flying display or amongst the static park, and this year was certainly no different with Richard Goodwin opening the show in his colourful Pitts S2-S. Richard has always been a great supporter of the event and is always well received by the Yeovilton crowd. Now a regular sight at Air Day, the Royal Jordanian Falcons provided further aerobatics with their four Extra 300Ls. The team will be performing at several venues across Europe this year, including Bray and Sanicole. 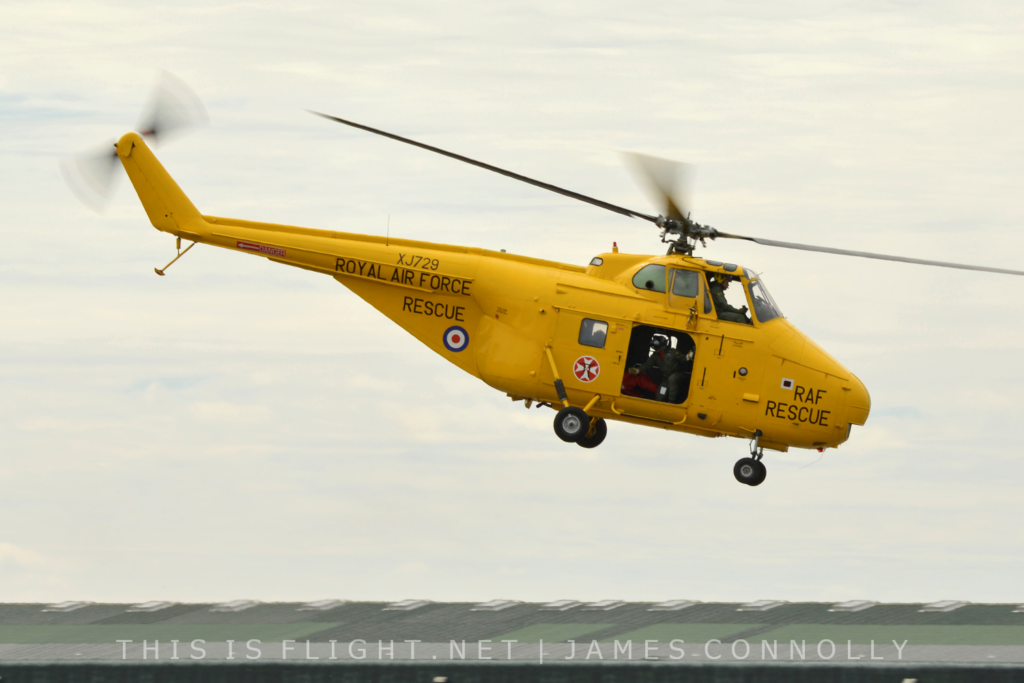 Making its debut in the Yeovilton flying display following several years as an attendee in the static park, was Lift West’s Westland Whirlwind HAR.10. Conceived as a replacement for the Westland Dragonfly, the Whirlwind was used primarily for Search and Rescue operations, amongst other roles. As mentioned in our Cosford report, Lift West have recently acquired two Wessex helicopters with the intention of restoring at least one of them to airworthiness. I’m pleased to report that just prior to the event, the two examples were transported via road from RNAS Culdrose, to their new home near Crewkerne – an early but major progression in the restoration of these ‘whirlybirds’. 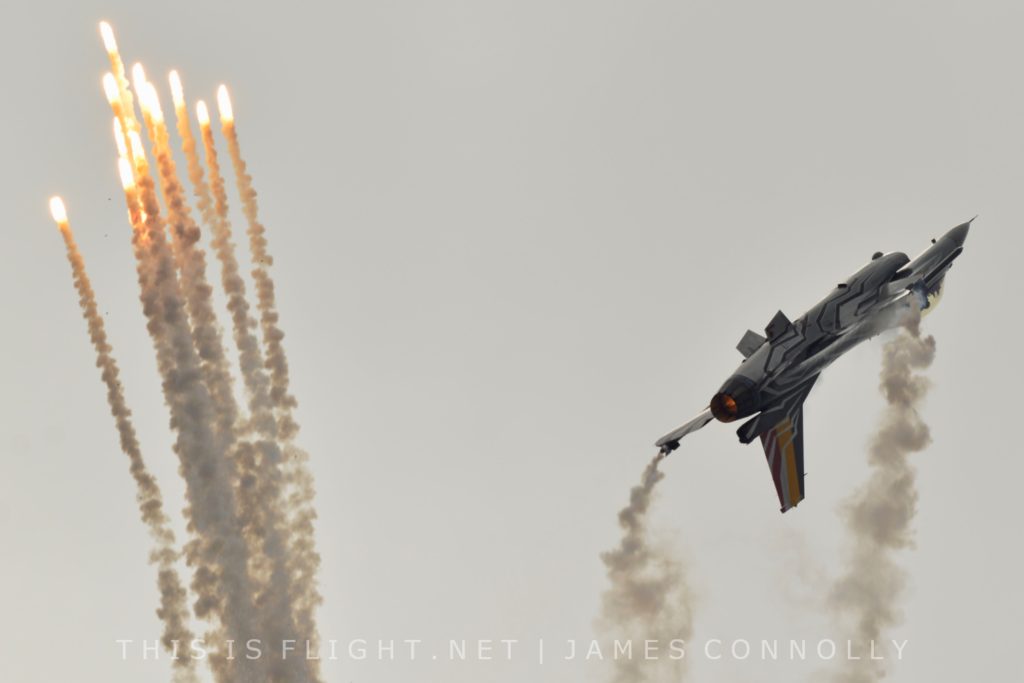 The first of many fast displays came from the Belgian Air Component’s Lockheed Martin F-16AM Fighting Falcon. In his third and final year as the F-16 solo display pilot, Captain Tom ‘Gizmo’ de Moortel never fails to impress spectators across Europe; Gizmo does a marvellous job at keeping the aircraft close to the crowd throughout the display. Meanwhile, contributing a second example of the F-16AM to the flying display, was a rare appearance from the Danish Air Force. Scheduled to be retired by the Danish Air Force by 2024, the F-16AM gave an exhilarating and high-energy routine. The Danish Air Force also contributed to the static park with a pair of soon-to-be retired Lynx Mk90bs – one of which was sporting a rather eye-catching special livery. 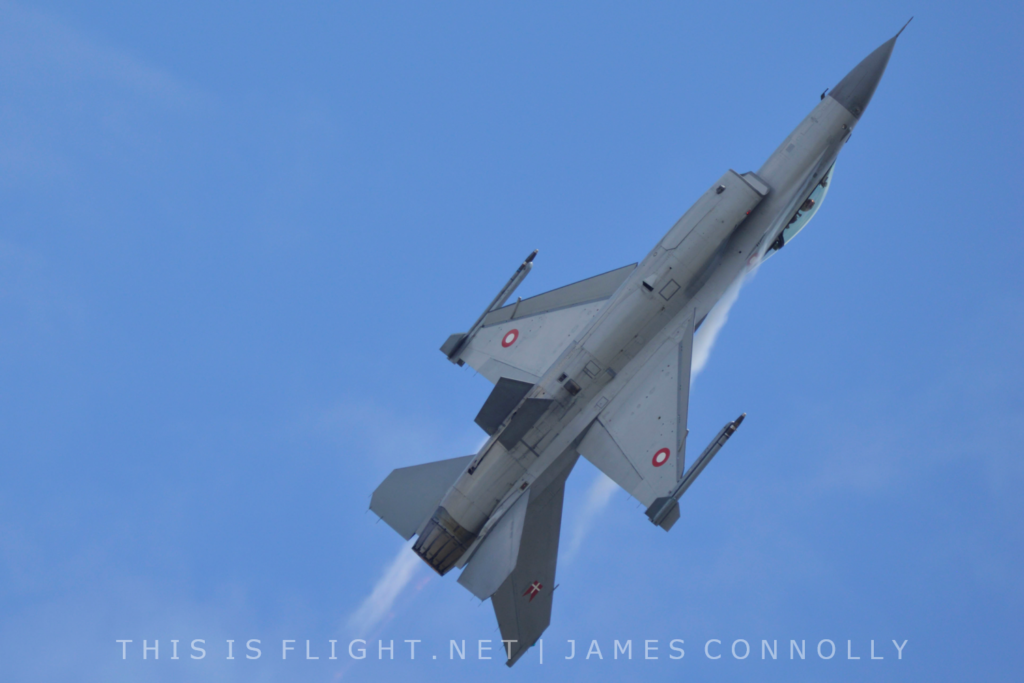 The French Navy – or Aéronavale – have always been huge supporters of Air Day, and this year the air arm returned with their popular Dassault Rafale M pair, in addition to the Westland Lynx HAS4 in the static park. Operated by the Flotille 11F squadron based at Landivisiau, the pair gave a spectacular demonstration once again, deservedly receiving the joint-award for best fixed-wing display. As an added bonus, the lead aircraft was painted in a rather admirable ‘White Tiger’ scheme. The ageing Atlantique II had also been scheduled to make a very rare appearance in the flying programme, but was unfortunately withdrawn on the Friday due to operational commitments. 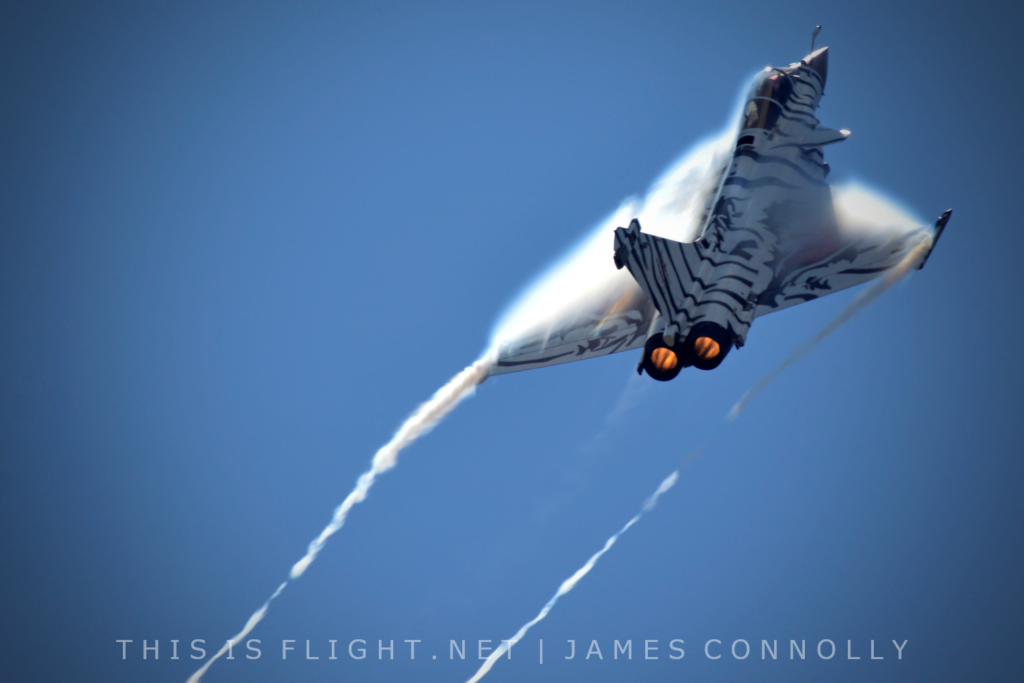 Further international participation was provided by the Czech Air Force with their Aero Vodochody L-159 ALCAs pairs routine, as well as a solo JAS-39C Gripen. The latter display also took home the award for the best fixed-wing display, just as it did when it last participated in 2013. A third example of the L-159 could be found in the static display, wearing the markings of a Spitfire flown by Czech pilot Lieutenant František Peřina – a tribute to the Czechoslovak airmen that served in the Battle of Britain. 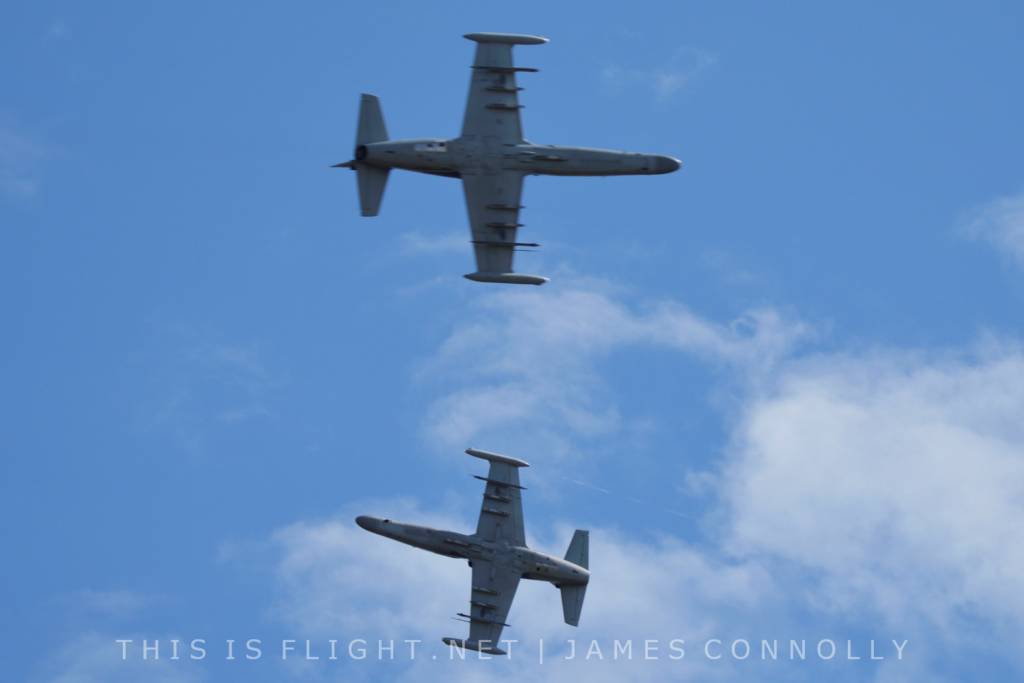 After a lengthy absence on the UK airshow circuit, the Battle of Britain Memorial Flight’s Avro Lancaster B made a welcome return to Yeovilton Air Day. The team were unable to achieve their PDA (Public Display Authorisation), having only returned to the air just 10 days before the event. Despite this, the aircraft was still able to perform several passes alongside Supermarine Spitfire Mk PRXIX. The Royal Air Force have been criticised in the past for their apparent lack of support for the event, but this year saw a much improved contribution from them. Operating out of RNAS Yeovilton for the first time in 5 years, the Red Arrows gave an enjoyable performance, taking full advantage of the improved weather. Flt Lt Ryan Lawton put the Royal Air Force Typhoon FGR4 through its paces in an enthralling display with plenty of tight turns and high-speed passes. 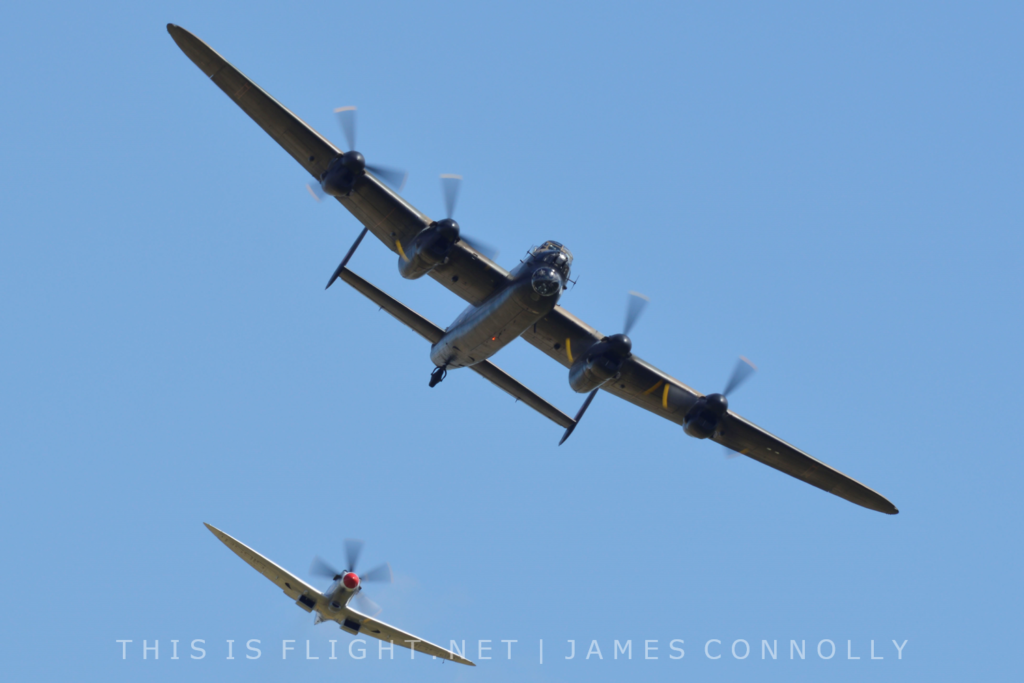 Based at RNAS Yeovilton, ‘Navy Wings’ is a heritage aviation organisation that boasts an impressive collection of historic naval aircraft; this year’s Air Day saw great support from the Fly Navy Heritage Trust, both in the air and on the ground. Formed just over a year ago, Navy Wings’ unique collection of aircraft includes such rarities as the Sea Vixen, as well as two Sea Furies: T20 and FB11 variants. One of three examples of the Fairey Swordfish owned and restored by the trust, the Mark II variant, could be found located in one of several hangars opened up to the public, along with David Bremner’s Bristol Scout. Inside, visitors were able to talk to the engineers who restore and maintain these aircraft. 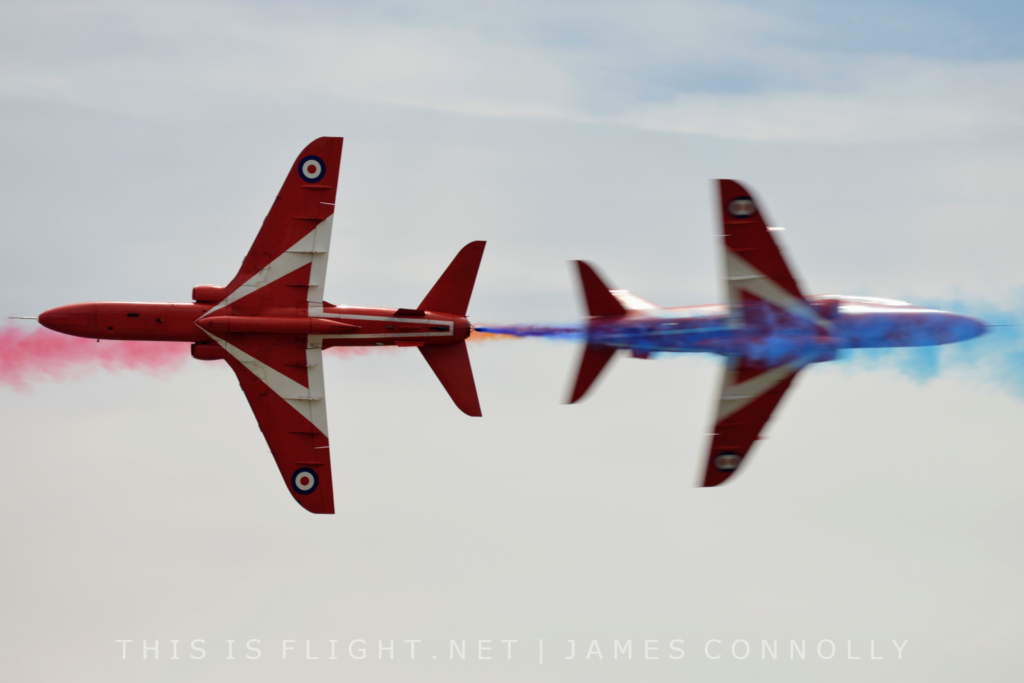 A host of other Navy Wings aircraft could be found located in the static park including the show’s ‘poster girl’: the venerable Sea Vixen FAW2. XP924 received extensive damage to its airframe following a forced landing in May, as a result of a complete hydraulic failure. Unfortunately the damage is more serious than first anticipated, with cracks present along the tail booms, and warping of the main bulkheads. The trust are now appealing for a ‘white knight’ to step forward, in order to raise the required £2-3 million necessary to return the aircraft to airworthiness once again. 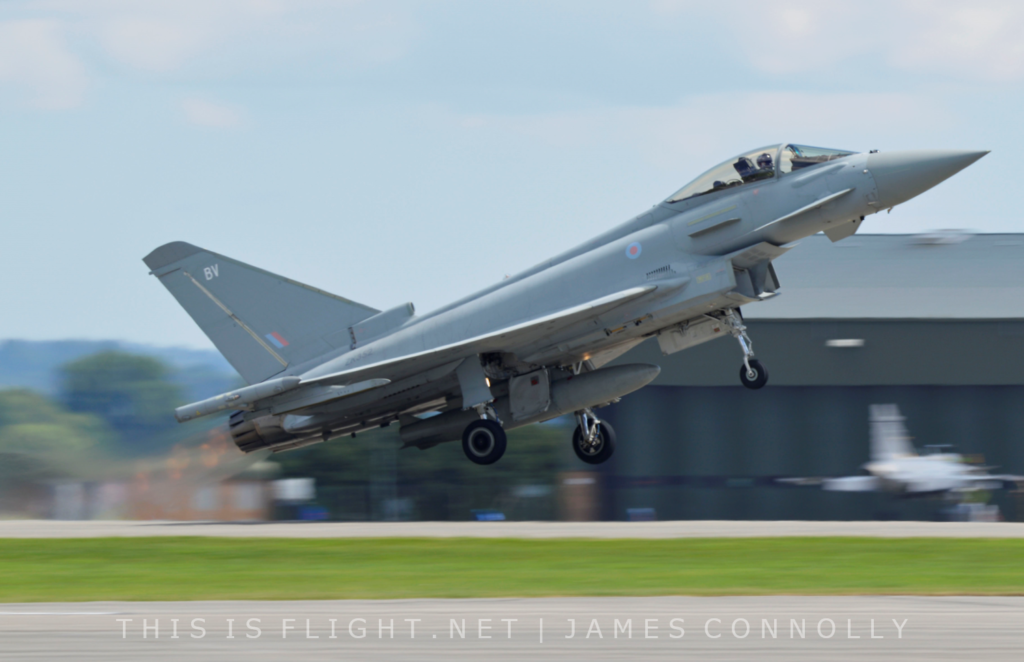 Another aircraft that was sadly unable to participate was the Fly Navy Heritage Trust’s Sea Fury T.20. Having completed several engine runs at North Weald prior to Air Day, it was hoped that G-RNHF would be ready for the event, having suffered an engine failure at RNAS Culdrose Air Day back in 2014. We were expecting to see a unique pairing consisting of the Sea Fury and the Norwegian Air Force Historical Squadron Mikoyan-Gurevich MiG-15UTi, a formation that would have been very poignant given that a Sea Fury famously shot down an example of the Soviet fighter during the Korean War. The two aircraft would have engaged in a dogfight scenario, with the Sea Fury in pursuit of the MiG. Nevertheless, the collection’s de Havilland Canada Chipmunk T10 was able to get airborne, with Chris Götke providing an elegant display in the two-seat trainer. Meanwhile, John Beattie demonstrated the capabilities of Kennet Aviation’s North American AD–T6 Texan; registered as G-KAMY, the Texan – or Harvard – is an associate aircraft to the Navy Wings Trust. 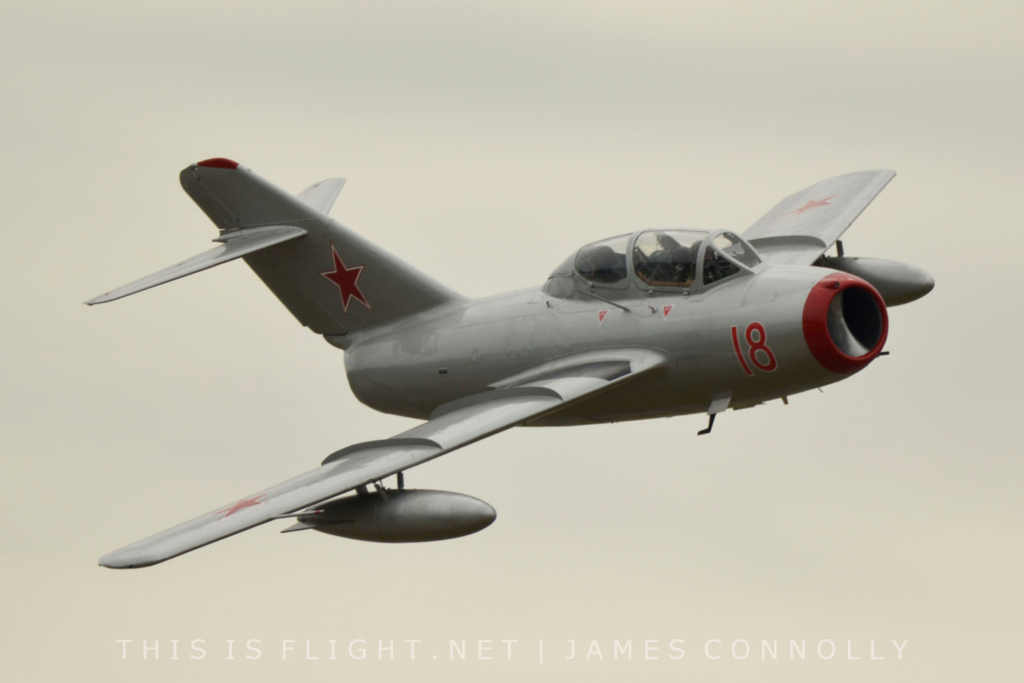 The Patrouille Suisse made a welcome return to Yeovilton for the first time in 10 years, closing the show in delightful fashion. Comprising of six Northrop F-5E II Tigers, the team’s display includes several tight and well-polished formation passes, as well as a spectacular break accompanied with flares. With the F-5’s future in doubt, it is not known as to how any more opportunities we will have to see the team again. 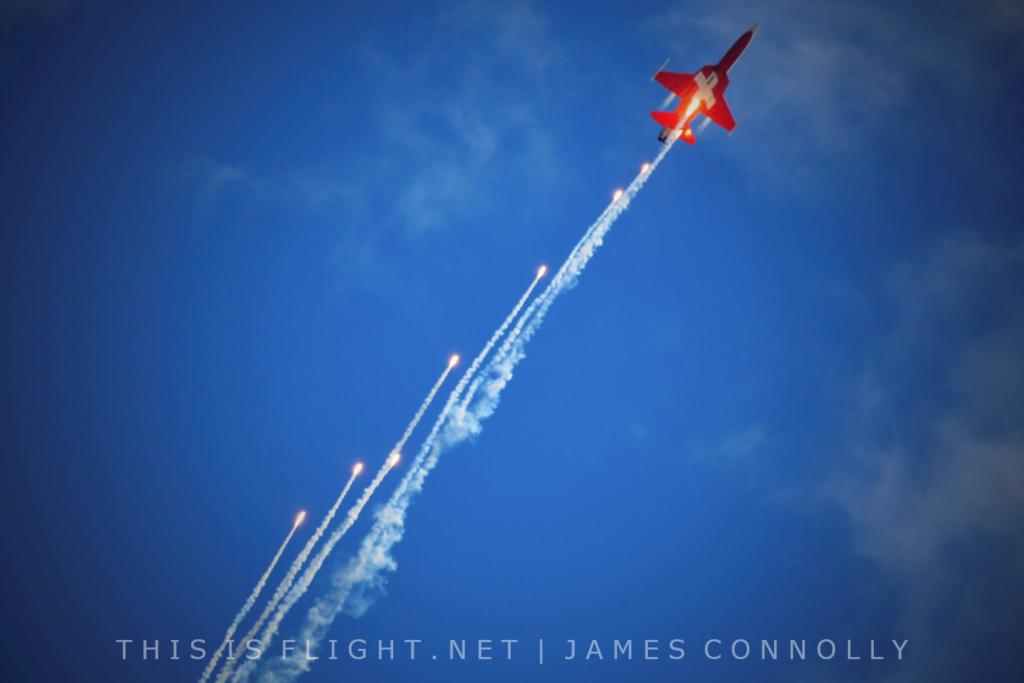 It must be said that this year’s superb flying display included some unique rarities that may not be seen elsewhere in the UK this year. As always, Air Day provided visitors with an insight into the Fleet Air Arm’s ongoing operational commitments – in the UK and overseas; along with a rare opportunity to get up close to Naval aircraft of the past, present and future. A large amount of credit must be given to the organisers for securing a considerable amount of foreign participation, something that certainly made up for the lack of support from the Senior Service when compared to previous years. I sincerely look forward to returning to Yeovilton Air Day in 2018.