2017 saw the inaugural edition of the RAF Scampton Airshow, held over the 9th-10th September. Built on the site of of a First World War Royal Flying Corps airfield, then called Brattleby, RAF Scampton re-opened in 1936. The base has seen many aircraft types over the years, and many squadrons stationed there; perhaps the best-known is 617 Squadron, the “Dambusters”, who rose to fame when Wing Commander Guy Gibson led a Squadron of modified Lancaster bombers on Operation Chastise. The raid used innovative new “bouncing bombs” to destroy major dams deep inside Germany. Today the airbase has a heritage centre to remember the men who took part in those raids. After a brief stint with the US Air Force in 1948, during which it housed B-29 Superfortresses, the base returned to RAF hands and became a key station for, among others, the Avro Vulcan. Today, Scampton is home to the Royal Air Force Aerobatic Team, the Red Arrows. 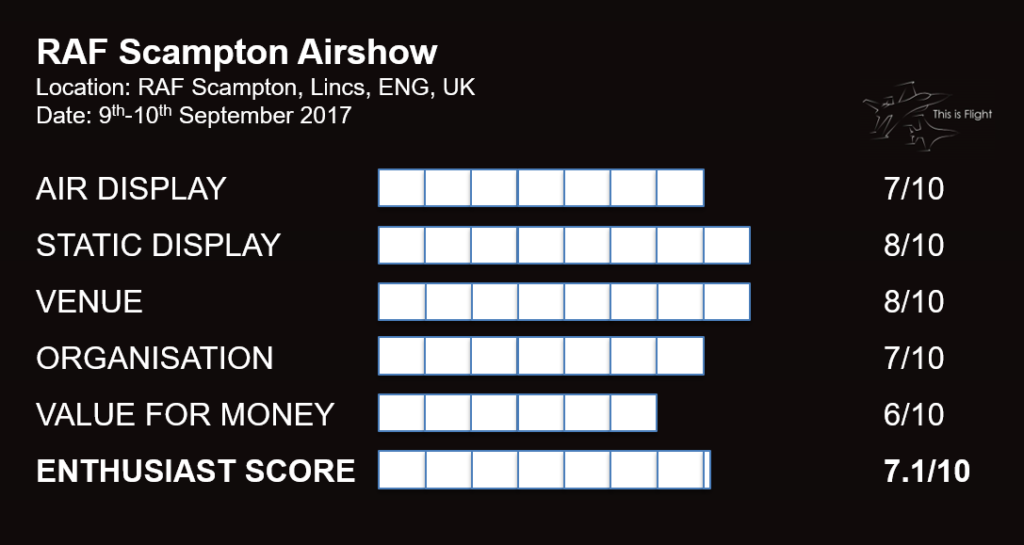 Since the closure of the Waddington Airshow in 2014, the “Bomber County” hasn’t hosted a military airshow. That changed when the Royal Air Force Charitable Trust (organisers of the Royal International Air Tattoo) were asked by the Royal Air Force put together a show. Eagerly anticipated by many, the show was seen by many as an homage to Lincolnshire’s illustrious aviation history. At £39 the admission price was one that demanded very high level of participating aircraft. After RIAT and Farnborough, it is the most expensive airshow in the UK. The show also offered numerous enclosures and a grandstand. These started at £20 on top of the standard admission price and included on-site parking (standard ticket holders parked off-site, whereupon they boarded a well-organised and swift shuttle bus service). 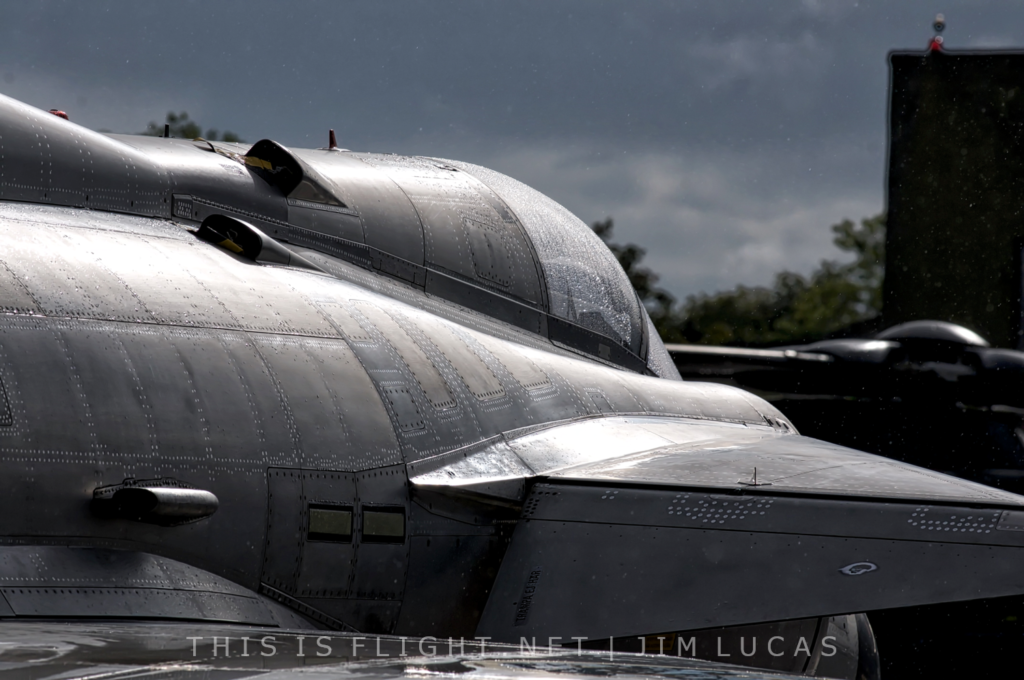 After a slightly late opening of the on-site carpark, I subsequently found that the Grandstand and Flightline Gardens were still a short bus ride away. It was also a nasty surprise to find that neither area was located anywhere close to the centre of the display line. I’m able enough to walk the distance, although it’s fair to say that wasn’t the case for all. 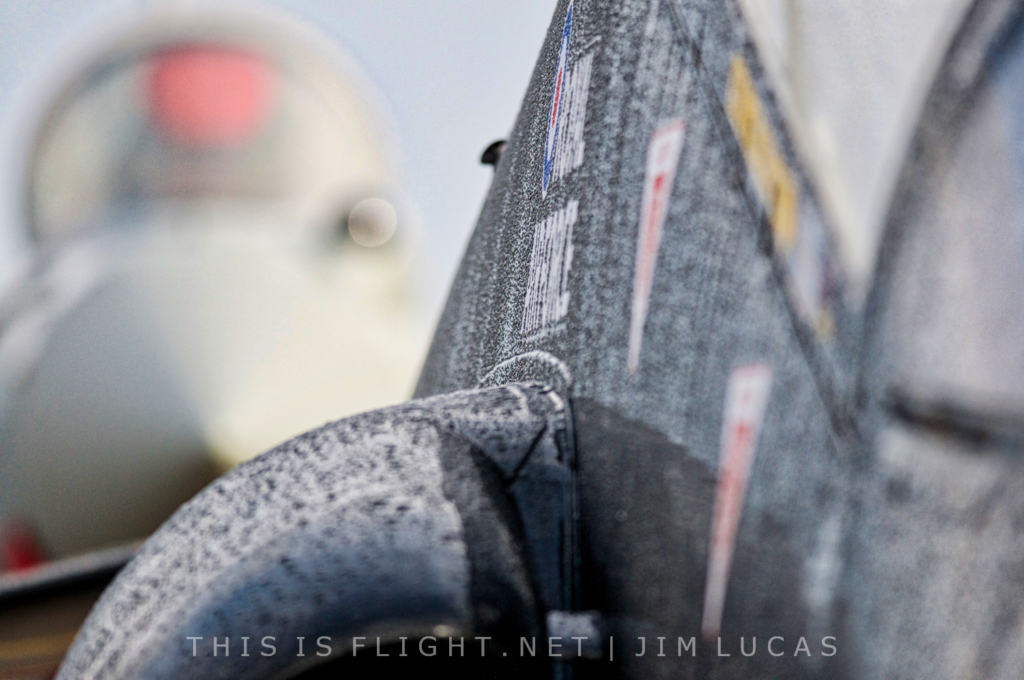 On the base, there were the usual stalls selling their wares, some of them from the regular circuit of attendees, some new. I felt, however, that the number of stalls aimed at aviation buffs was slightly lacking. The small but high-quality static lineup was made up in the main by classic jets and vintage aircraft: this included a rare appearence from the Swedish Air Force Historic Flight with the AJS-37 Viggen, J-29 Tunnan, J-32 Lansen and SK-35C Viggen, in addition to UK-based aircraft such as the seldom-seen Buccaneer S2B, Su-22M-4 Fitter and F-4F Phantom of Scampton-based HAA Ltd. Modern military came from the UK, Belgium, Germany, the Netherlands and, most notably, the Royal Canadian Air Force with its CF-188C Hornet. 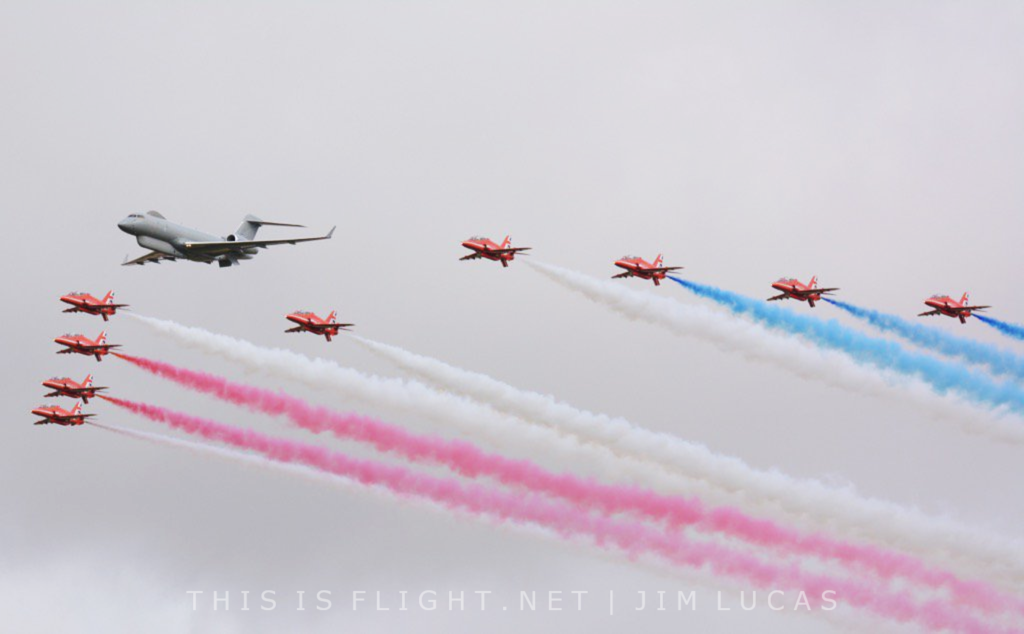 On the Saturday, the show was kicked off with a flypast by an RAF Sentinel R.1, escorted by the Red Arrows. Sadly it proved to be the only time that nine Red Arrows jets appeared; with one pilot on paternity leave and one aircraft unable to fly, only four jets took part in the display later in the afternoon. It was nice to see the RAF E-3D Sentry grace the skies with a single flypast following the opening of the show, reminiscent of the Waddington days. 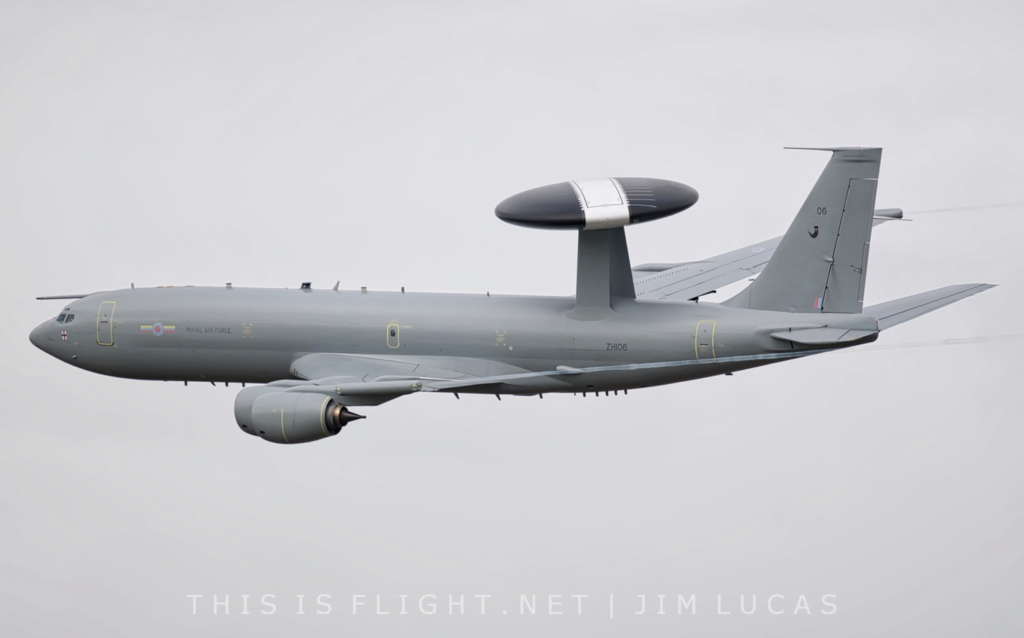 A solo  Gazelle was the first full display of the day, although as previously mentioned, the position of the enclosures was such that the majority of the display was well away from us at crowd centre. Despite this, the Gazelle put on a fine display for all. Next was a pairs display from Strikemaster Display UK, performing a stunning display with one Strikemaster and one Jet Provost. Mark Petrie has put many hours in this season developing the new two-ship display routine (there were even plans to add a third aircraft at the Bournemouth Air Festival), and his efforts are greatly appreciated. 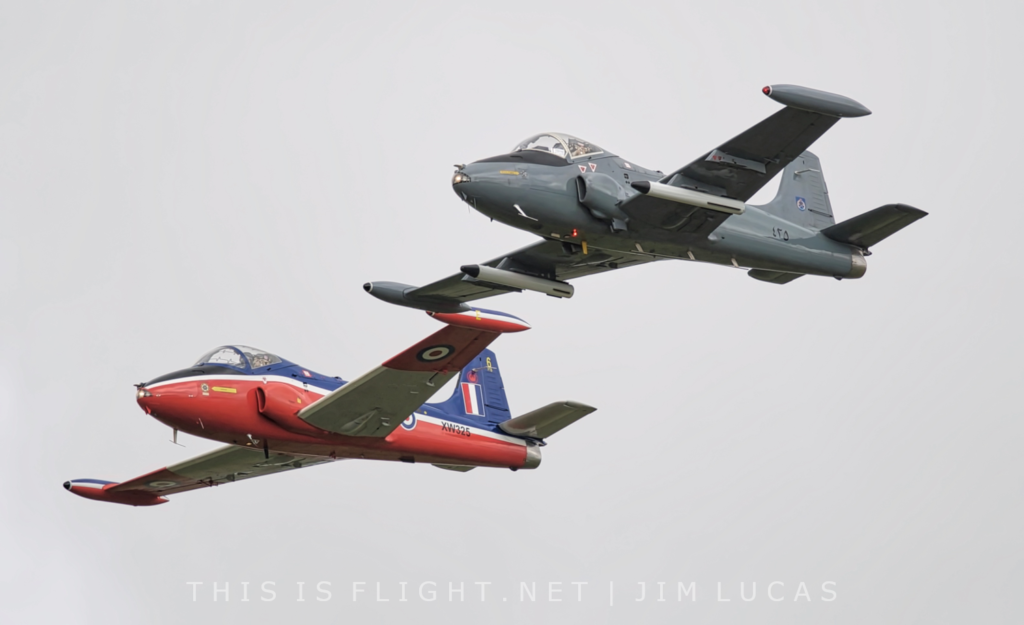 Although the RAF Falcons parachute team were dogged by low cloud and rain, they managed to perform their show in challenging conditions which could have so easily forced them to cancel their display. Richard Goodwin was next in his “Muscle Pitts”, showing us all what it really means to throw an aircraft around the skies. He performed to the highest of standards as we have come to expect from Goodwin, and certainly proved to be a real crowd-pleaser. 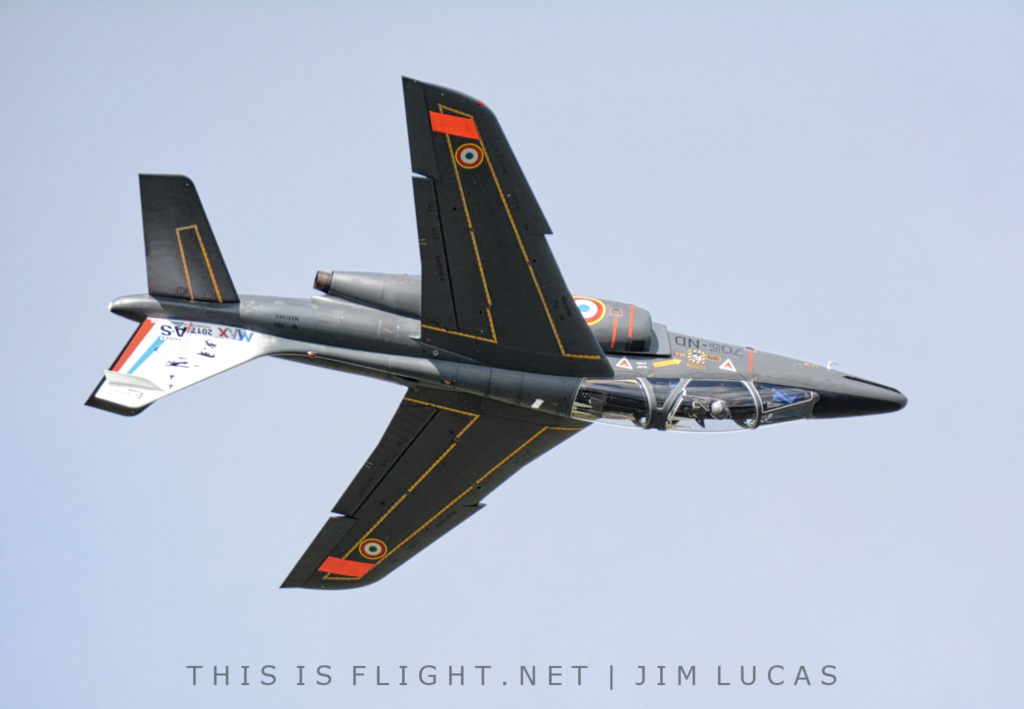 Next, we were treated to a very spirited display from the French Air Force’s solo Alpha Jet display, making his sole UK appearance of the year. Dancing around the skies, the display showed the aircraft to its full potential, including some imaginative, complex and extremely precisely-executed manoeuvres – top marks to the French! Sadly, this was to be followed by a period of inactivity as the Percival Pembroke went “tech” and became stranded on the runway. This then set the scene for a further cancellation from the Global Stars who found themselves unable to take off due to the Pembroke’s positioning. Thankfully the Breitling Wingwalkers saved the show from the confusion caused by the Pembroke, taking off on the part of the runway that had remained clear. Of a similar family-friendly nature was Peter Davies in his Calidus Autogyro. BAE Systems’ Avro Anson with its striking blue livery was the next aircraft which managed to get airborne. 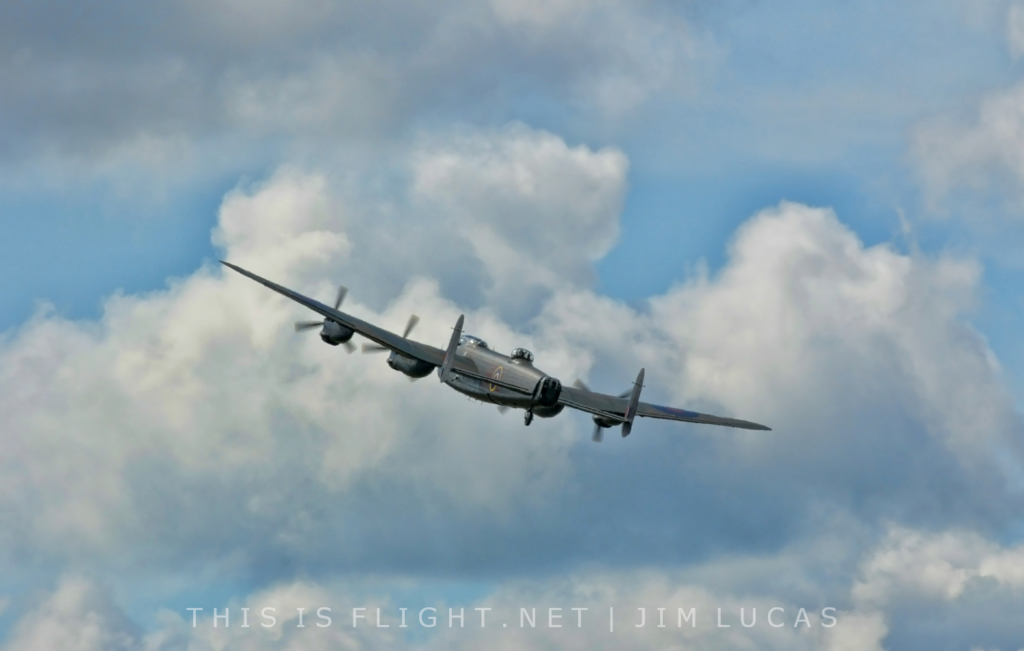 In the recent weeks, we had been told that the bulk of the RAF’s Battle of Britain Memorial Flight had been grounded due to an engine issue. This did not bode well for the Scampton show, which had been promised a unique five-ship display to celebrate the Flight’s 60th anniversary. As ever, the team pinpointed the issue quickly and cleared two additional aircraft to display, with the Avro Lancaster completing its airtest on the morning of the show! Saturday saw a display by one Spitfire, Hurricane and Lancaster, but high winds on Sunday limited the display to just the two fighters. Keeping with the warbirds was P-51D Mustang “Tall in the Saddle”, another machine with a significant pedigree. The Hanger 11 Mustang represents the Tuskegee Airmen from the 332nd Fighter Group. Rolling with the clouds, pilot Peter Teichman filled the sky with a display speed and agility which still packs surprising punch for an aircraft of that age. The endearing  B-17 Flying Fortress “Sally B”, with her clean lines and graceful display, followed the Mustang. “Sally B”, which is the only airworthy aircraft of its type in Europe, flies as a tribute to the 79,000 US airman who died during their service in WWII. 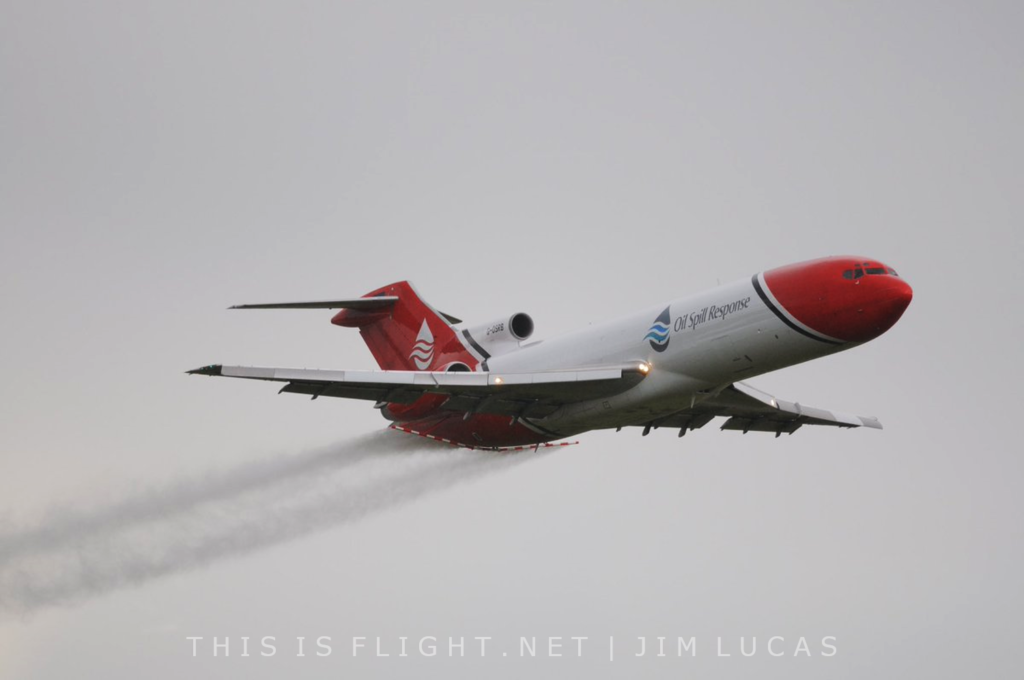 Tony de Bruyn was in the in the air next with his North American Rockwell OV-10B Bronco. What can you say about his display? Energetic, flamboyant and intense: it’s all of this and more. Again, a very well-flown and engaging display. The next aircraft, a Boeing 727, was from much the same era. T2 Aviation’s oil spill response aircraft has participated in several UK airshows in recent years, and as a display it ticks the boxes on every level, featuring a demonstration of its spray operation and a couple of neat low passes that you could watch all day. 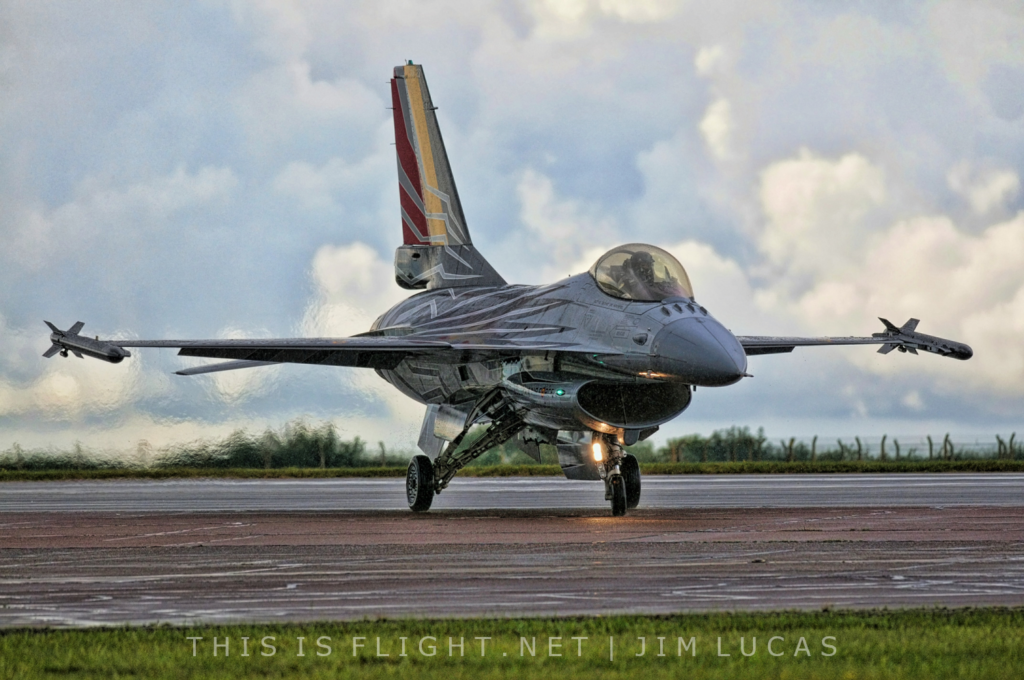 Towards the end of the show we saw the Belgian F-16AM Fighting Falcon with Tom “Gizmo” de Moortel at the helm. He lit up the skies, played catch with the thunder, out-paced the storm and tickled the Gs and made the “Blizzard” sing – a stunning piece from him at his final UK airshow. The Norwegian Air Force Historic Squadron gave two vintage jets an outing; a two-seat de Havilland Vampire T.55 and single seat FB.52. Restricted from aerobatic display due to post-Shoreham CAA regulations, the pair performed several graceful passes including several photographer-pleaseing topsides in weather conditions that were far from ideal. 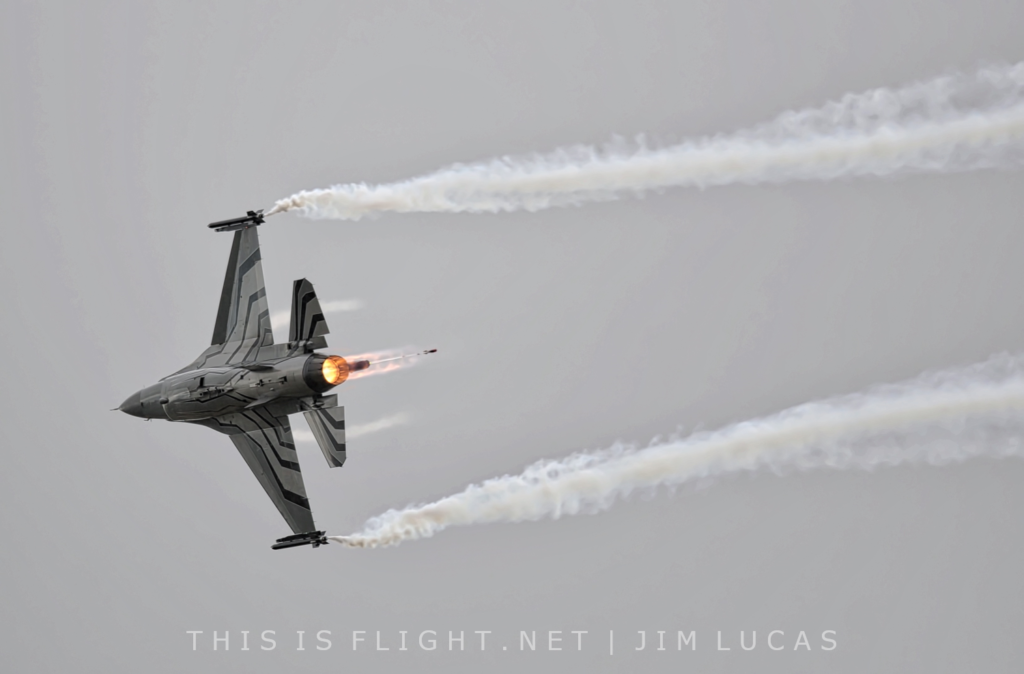 Closing the show was a high-octane display from Flt Lt Ryan Lawton in the RAF Typhoon FGR.4, and in typically unpredictable fashion, the weather opened up for the finale, allowing a full display. All the pilots put on stunning and imaginative displays, but the show was dogged by more than its fair share of problems, often outside the organisers’ direct control. Leaving the show from the Green entrance took me around 20 minutes – not bad when compared to many other shows, although parking was limited. 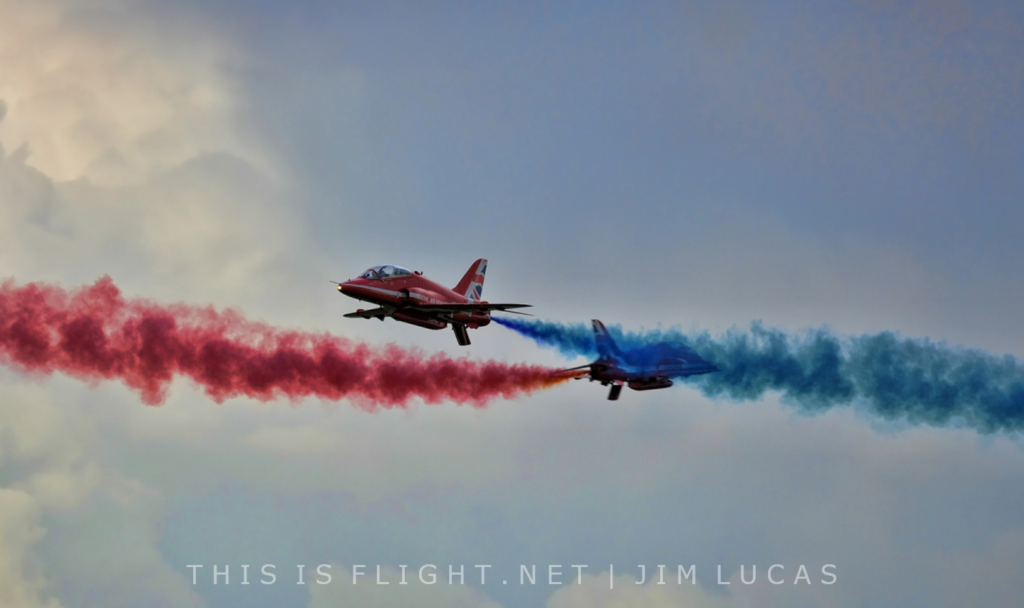 Truth be told, I am a little confused as to what the show wanted to represent: was it a flight through the ages, a display of modern military aviation or just a mixed bag of flying? In my opinion it was the latter. Perhaps the biggest criticism is the inclusion of a large number of items more familiar to audiences at seaside shows, rather than premium-rate events run by the RAFCTE. The lack of participation from the British armed forces was also disappointing, with display teams such as the Chinook and Apache both ending their display seasons shortly before the show at Scampton. This show has the potential to be the major season end event, but to do that it has to look at the price in comparison to what it has to offer for it. On speaking to attendees at the show the lack of variety set against entry costs was the major talking point. While few expected a mini-RIAT. I’m sure 2018 will see an improvement, as Scampton is certainly a viable location for a major airshow. The 2018 Scampton Airshow will be held on the 8th-9th September and will be part of the RAF’s centenary celebrations, although it does clash with major shows in Belgium and the Czech Republic; we wait with bated breath to see what the show can offer.