Duxford left its best show of the year till last. The Battle of Britain Airshow was an evocative celebration of the greatest air victory in history; we witnessed the designs of Sidney Camm, the Hawker Hurricane, and Reginald Joseph Mitchell’s Supermarine Spitfire, both flying in impressive mass formations. The tribute to the pilots of a time gone by was both fitting and emotional. We must thank those who seek out the aircraft and restore them to flying condition. 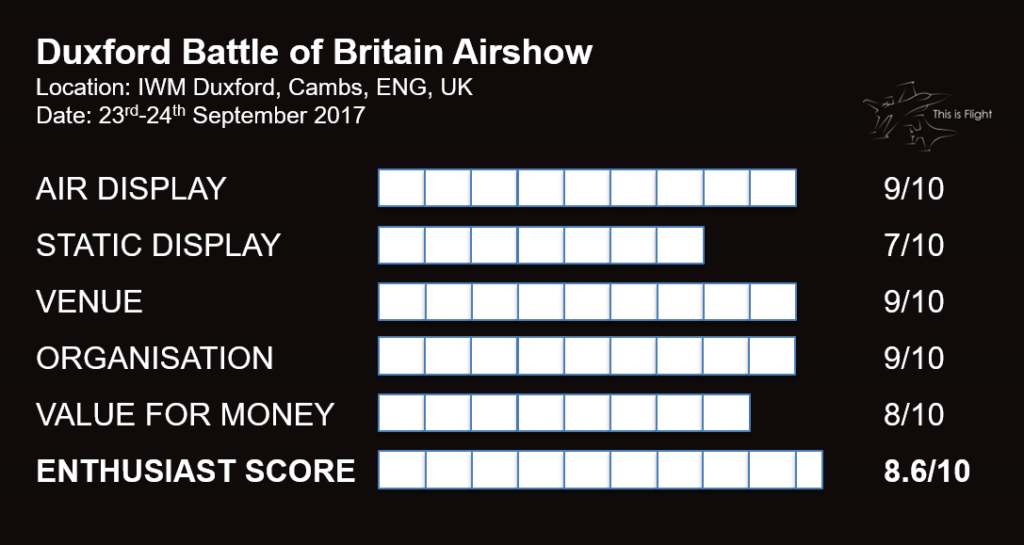 Duxford truly set a very high standard with this show. The flying display, which ran from 13:00 to 17:30, was an aviation spectacular of constant action, drama and enjoyment. The RAF Falcons Parachute Display Team opened up the show with a precise and exciting drop over the airfield. Next we were in for a real treat as the first warbird act took to the air: no fewer than six Hawker Hurricanes in formation then tail chasing around the airfield. The sight, sound and number of aircraft can only describe as astounding. The Sea Hurricane and Hurribomber were amongst the six Hurricanes flying in this, the largest formation display of Hurricanes in the UK for over a decade. With the number of airworthy British Hurricanes increasing, it’s sight I hope we see more often. 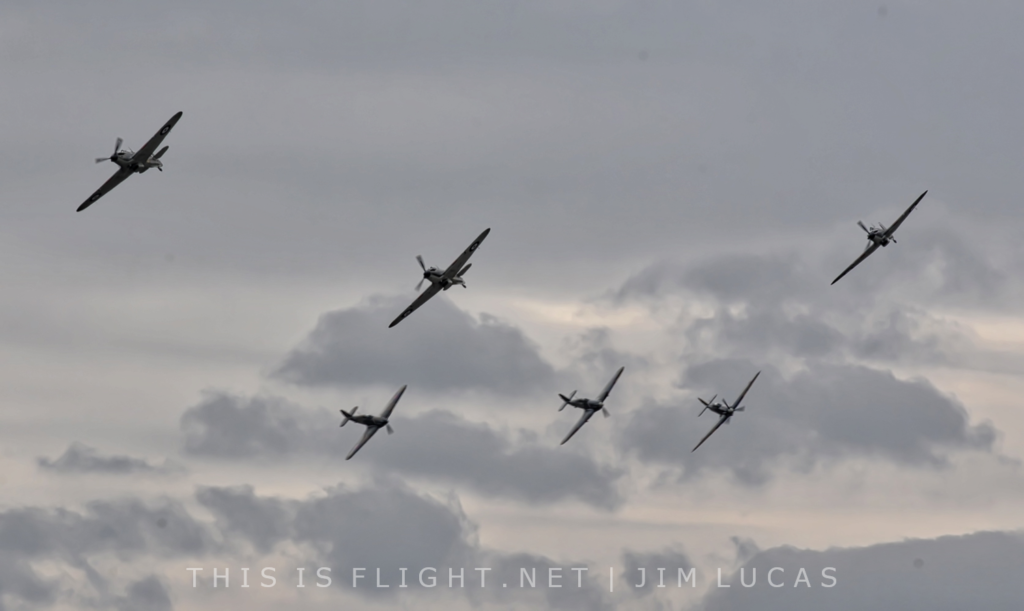 The Battle of Britain Memorial Flight followed this with their Spitfire, Lancaster and yet another Hurricane, which arrived in their signature three-ship formation before splitting and solo display routines. Although another formation display was due to take to the sky next, it was down to the Curtiss P-40C Warhawk to perform a solo display after the Hawk 75 encountered engine problems before take-off. The bare metal P-40 showed its agility as a fighter with a solid and sound routine. Whilst the displays are ongoing, other aircraft are moving around the airfield and preparing for their displays right in front of the crowd; it’s hard at times to keep up with what’s happening at times, but I love it. 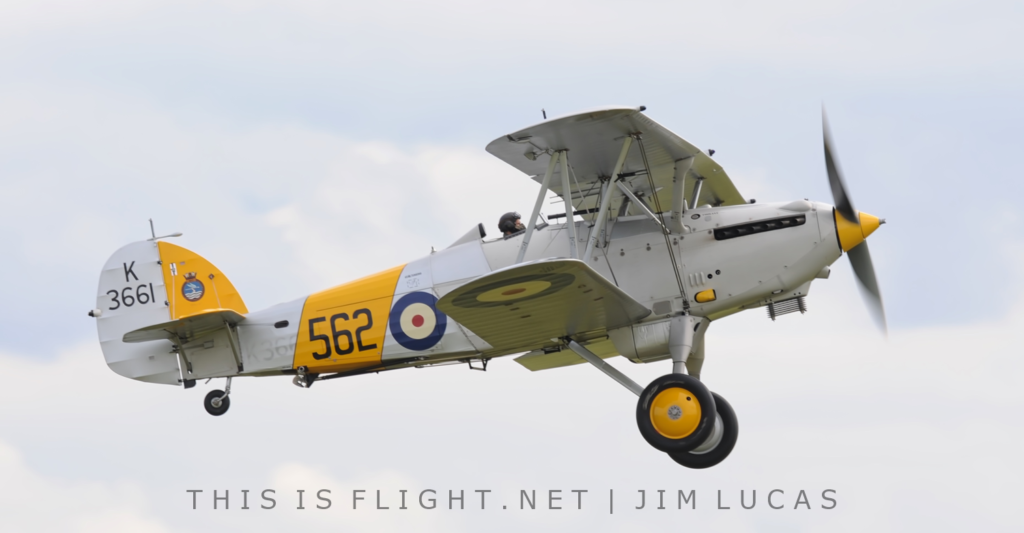 We were then treated to another display from the Hawker stable, this time in the form of two early aircraft: the Hawker Fury Mk.I and Hawker Nimrod Mk.I, the latter being recognisable as the predecessor of the Hawker Hurricane. Further biplane action came from the de Havilland Tiger Moth, an aircraft in which thousands of pilots trained for war, including many who went on to fight in the Battle of Britain. At the show we saw nine examples flying in formation courtesy of the Tiger 9 Aeronautical Display Team. It was a great section of the show, including several slow formation flypasts followed by a short sequence of opposition passes. 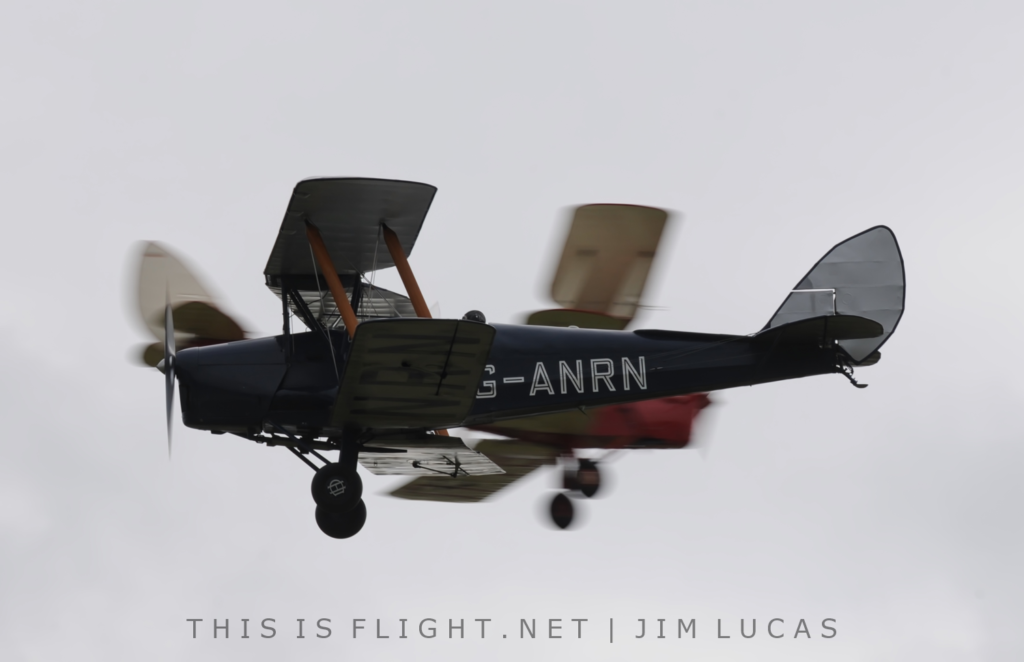 We were then transported to the Eastern Front during the Second World War; we saw a Hispano HA-1112 Buchon (somewhat paradoxically it was still painted to represent an Afrika Korps Me109) commence a strafing run on the airfield with pyrotechnics simulating a ground attack. The Buchon made a number of runs before a pair of Yak-3s arrived to intercept it. The Yaks gave an intense display of power and manoeuvrability, ending with a pass by the Buchon with simulated battle damage. Next up was a firm favourite of mine, and possibly one of the best displays on the circuit: the Great War Display Team. Entering the airfield under fire from simulated flak, the team burst into a sequence of dogfights and flypasts, enhanced by punchy and dynamic pyrotechnics.

Next was another Battle of Britain-era aircraft, the Bristol Blenheim Mk.I accompanied by the Gloster Gladiator Mk.I and Westland Lysander Mk.III. The trio together provided us with an unusual formation flypast, followed by solo displays. After strong Air Force representation, naval fighters were represented by the Grumman Bearcat and Hawker Fury. The Bearcat with its powerful Pratt and Witney 2,100hp radial engine sliced through the sky, chasing the Bristol Centaurus-engined 2,480hp Hawker Fury. The Sea Fury variant is credited with been the first piston engine aircraft to shoot down a MiG-15 – it was therefore apt, that an example of the early Soviet jet was due to appear later in the day. Another Fury – this time the newly repaired Hawker Sea Fury T.20 – also appeared in the static display; Duxford was its first airshow appearance following its accident at the Culdrose Air Day 2014. Further Naval displays came from the PBY-5A Catalina and Grumman FM2 Wildcat, both Duxford regulars. 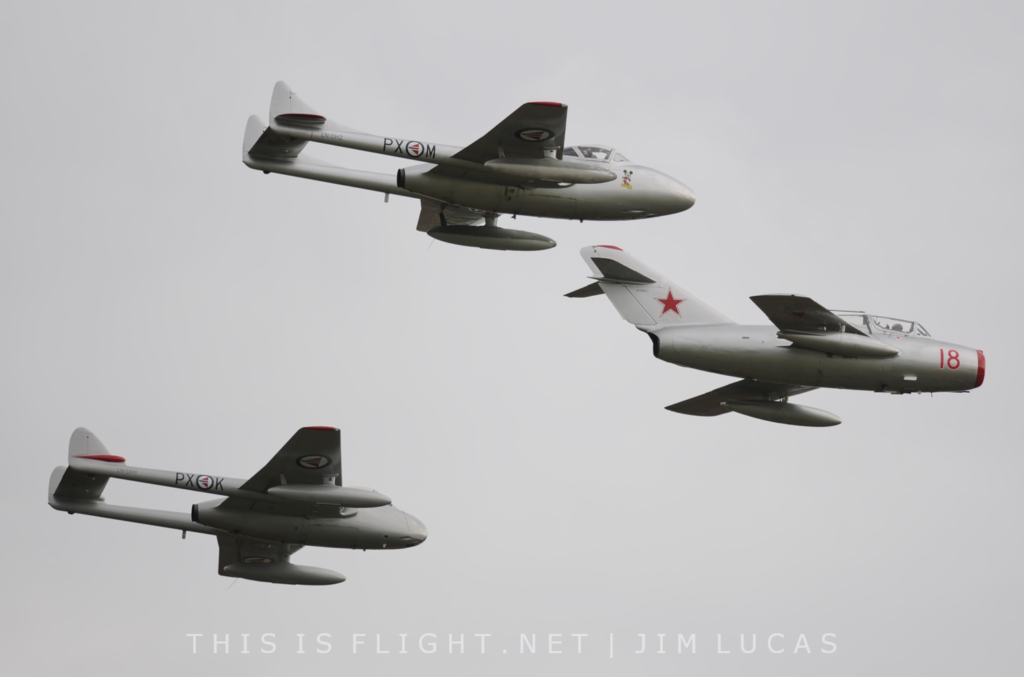 The only jet aircraft at the show came next: these came from the Norwegian Air Force Historical Squadron, who have based themselves at Duxford for the 2017 airshow season. On display at Duxford were the Mikoyan-Gurevich Mig-15 UTI and the two de Havilland Vampires – one FB-52 and a T.55. Unable to perform aerobatic manoeuvres due to the current CAA regulations, the pilots gave the crowds plenty of flypasts, including one with all three aircraft in formation. This team have attended many shows in the UK this year, for which we should be very grateful.

The next section featured a number of American heavyweights: Boeing B-17G Flying Fortress “Sally B” and a pair of C-47 Skytrains in formation in a graceful and emotional display that belied the aircrafts’ age and size. The B-17 was to be joined by a pair of P-51D Mustangs; in the distance the fighters were closing in on the B-17 when the two aircraft appeared to make contact, prompting P-51D “Miss Helen” to declare a Mayday, although both aircraft subsequently landed without major damage. The B-17 continued its display until both aircraft were recovered. 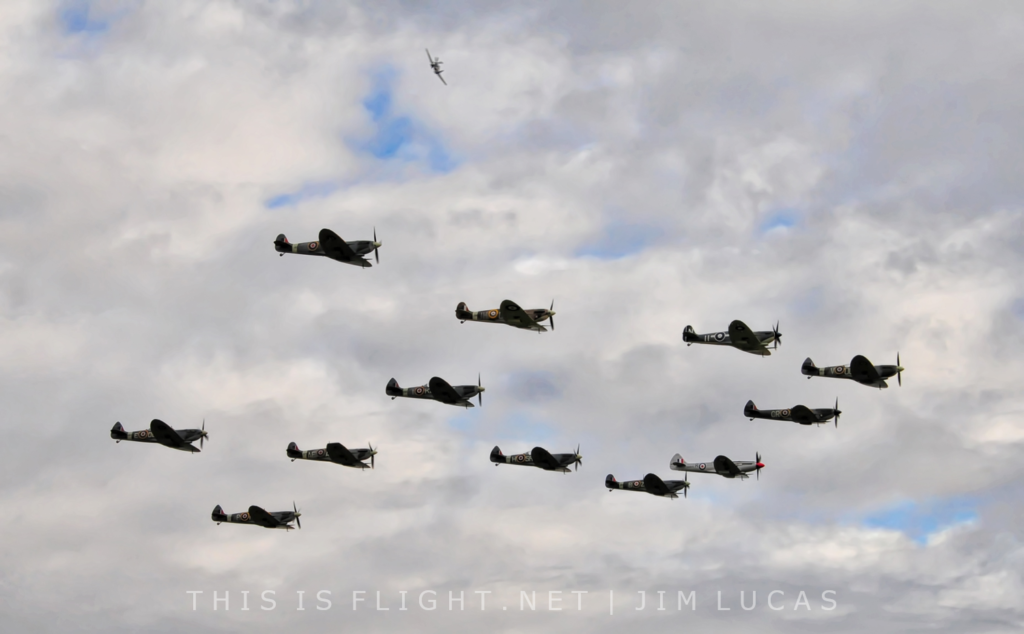 Next was the climax of the show: a mass flypast of fourteen Supermarine Spitfires. Watching them as they fired up and taxy past the crowd to the runway was something that all aviation enthusiasts must experience. Taking off to form up into a 12-ship formation, they looked remarkable. The flypasts themselves then led into a series of breathtaking tail chases, filling the sky with a gaggle of aircraft and the deafening roar of countless Merlin and Griffon engines. 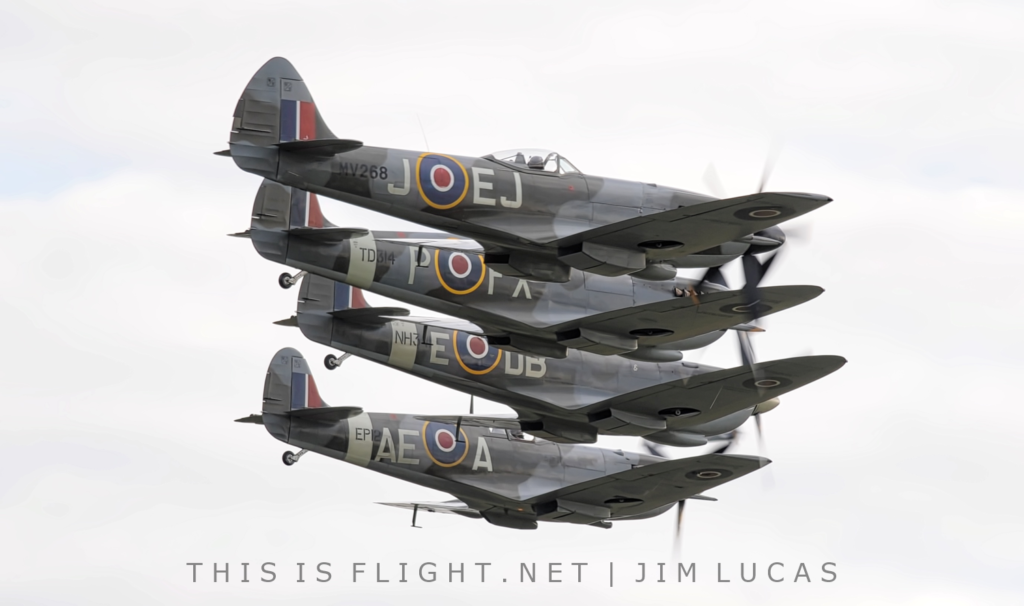 This, however, was not the finale to the show, as the Duxford team mustered another spectacular flypast almost reminiscent of the Balbos traditionally seen at Flying Legends, which comprised of three Spitfires, six Hurricanes, the Blenheim and Gladiator. Duxford really pulled it off with this one with a show that had it all, from the early days of WWI through to the Cold War and beyond: a sensational mix of aircraft often flying in rare and unusual combinations kept the crowds entertained throughout. 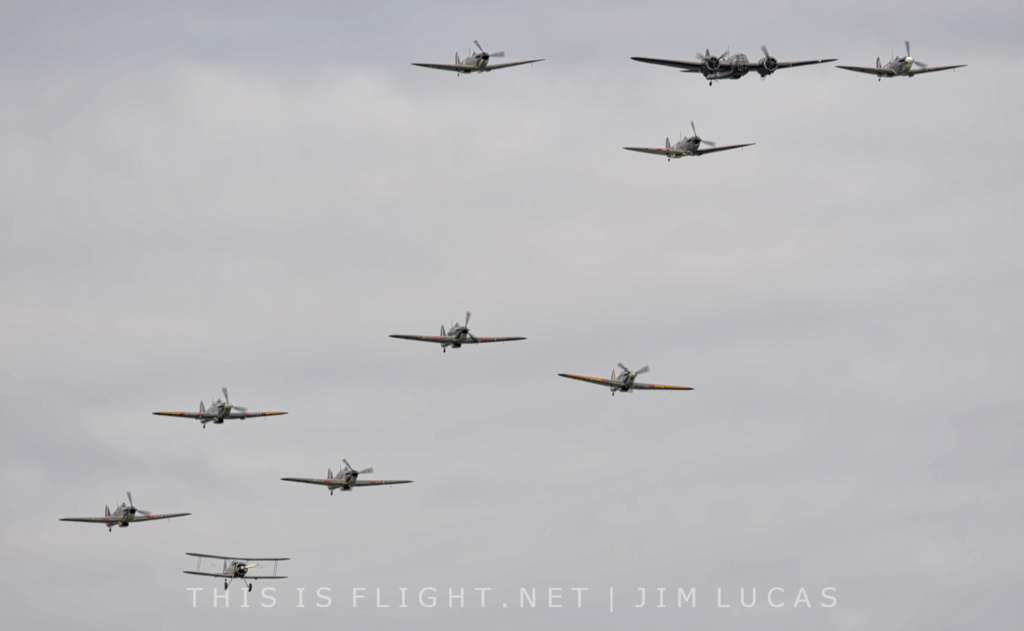 As one of the most expensive airshows in the UK and the only major British airshow to charge visitors for parking, value for money is an oft-debated factor of Duxford airshows. However, given that entry includes access both to the enormous museum and viewing of a truly world class airshow, it would be hard to make the case that the Battle of Britain Airshow was overpriced. Having visited all three shows in 2017 I would say that this was by some margin Duxford’s finest. My only gripe is the affect of the CAA regulations on display separation – as a photographer, the increased separation is extremely notable, and even watching with the naked eye the displays are noticeably distant when compared to pre-2015 shows. This, however, is not Duxford’s fault: they have to obey the regulations, and clearly did everything in their power to stage one of the most enjoyable airshows in the UK this season.