Where on earth do I start with the RSAF Open House? If I were to sum it up with one word, it would probably be “different”. It’s hard to explain why I chose that word, but it does seem rather fitting. That’s not to say I didn’t enjoy it – I had a great day – but it was a million miles from what I was expecting. Scroll down for video. The RSAF Open House is a free event held every few years at Paya Lebar Air Base. Open Houses change little over time, and follow basically the same format, with an almost-unchanged aerial display, similar arming demonstrations, live musical entertainment and a static display featuring most of the RSAF’s aircraft. Sadly, the one missing plane was the F-5 Tiger II, seeing out its final days in RSAF service. Although the F-5 is likely to be in service at the next Open House (predicted to be in 2018 for the RSAF’s Golden Jubilee), I would have liked to have seen this venerable old beast at every opportunity possible given its imminent retirement. A C-130 takes off on a joyflight as a Chinook loads its passengers on the ramp. Photo: Adam Landau

When I arrived, the static display was almost deserted: the queue to board the Fokker 50 had a mere two people, the Chinook didn’t even have a queue at all (I got a photo of the empty interior and then walked straight in) and the KC-135 had just two people around it. Like at the Singapore Airshow, most of the aircraft were not fenced off, meaning you could get right up close to the aircraft – a nice touch. Even into the evening, the staff in the static display were cheerful, happy to talk to visitors and had their hands full of freebies – hats off to them for staying pleasant and helpful even after a full day standing in the sun. There was almost nobody in sight around the KC-135 in the morning. Photo: Adam Landau

Some of the static display aircraft were enclosed by fences – those were the ones with the arming demonstrations. That was one of the other great things about the Open House: even in the 3 hour gap between the aerial displays, there was always something going on, be it an arming demonstration, flypast, parachute jump or one of the many C-130s, F-50s or Chinooks taking passengers on joy flights. 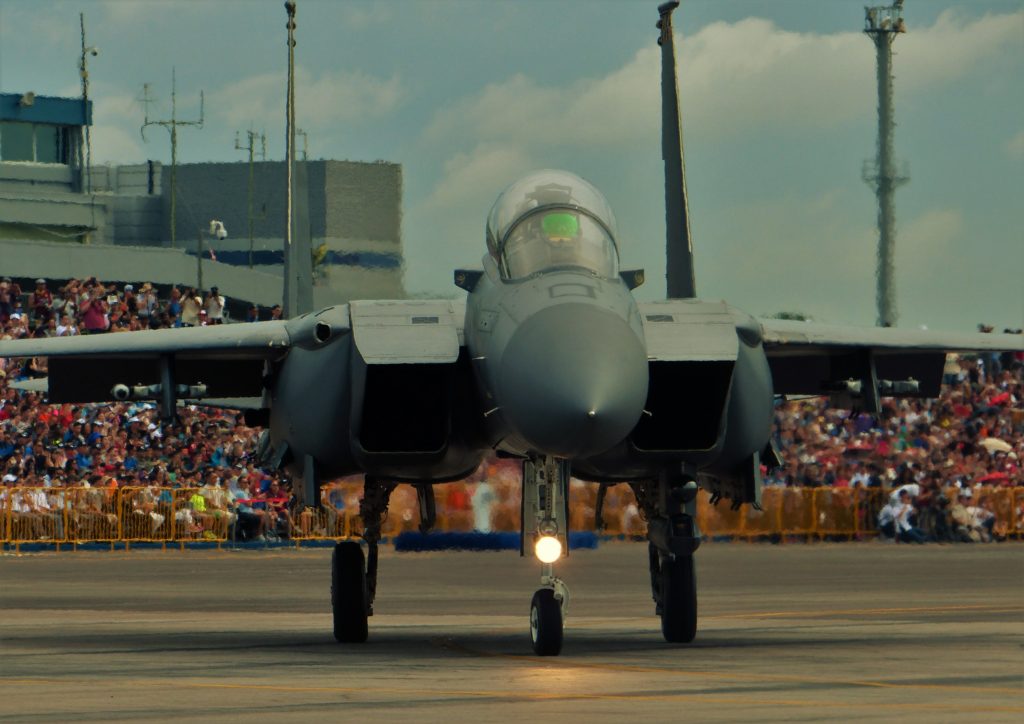 The grandstand can be seen behind this F-15SG. Photo: Adam Landau

The aerial display was the only disappointment of the day. The first section involved two F-15SGs and two F-16Cs scrambling to intercept an unknown aircraft. Initially, this was great, with many fantastic vantage points close to – or even above – the four jets as they started up. However, during the take-off roll, they disappeared behind an inconveniently-located giant screen. They then left for a full five minutes while we were shown pre-recorded videos (on which the demonstration relied far too heavily) and three Army vehicles drove about in front of us. The four jets arrived at the grandstand area from the far side of the airbase just before the show started. Photo: Adam Landau

The next we saw of them was when the two F-16C appeared doing a wagon-wheel in the far distance. The story was that they were intercepting a Diamond DA-40, and flying circles around it to get it to land, but because the DA-40 was on approach, all this took place several miles away and the demonstration was complete before any of the aircraft reached the runway. While it’s nice to see the RSAF doing their day job, it really doesn’t work very well as an aerial demonstration and should to be re-choreographed to make it more exciting. Part two of the demonstration was an airfield attack scenario. In RSAF terms, this means two Apaches flying in circles on the far side of the airfield, so far away that my 600mm lens, which would have been above the lens restriction at previous open houses, still wasn’t long enough. After the Apaches had performed a few circuits, the F-15SGs ran in for a single bombing run (it really was a case of “blink and you’ll miss it), while some utterly pathetic pyrotechnics went off beneath them. After the Apaches had flown in some more circles, a Chinook arrived with an under slung car, left the car in the middle of the airfield, unloaded some passengers, and flew off – possibly the most interesting section of the display. To close, the two F-15s and F-16s approached for a run-and-break to land. It would have been nice to see some more airshow-oriented displays, not just role demos. Photo: Adam Landau

Between the main aerial displays, there were some other activities. In the afternoon, the Singapore Youth Flying Club performed a very nice flypast with four DA-40s to an almost empty grandstand, and twice each day the Red Lions jumped from a C-130 Hercules. It was the Red Lions’ only display of the year with National Day Parade now being held in the National Stadium, preventing them from participating. Upon leaving the aircraft at 10,000 feet, the eight jumpers went into freefall in a tight ring. By the time they are low enough to see properly, the team have separated, deployed their parachutes and approach to land individually – hardly the most exciting parachute display team out there. Having said that, the aerial displays (or lack thereof) was the only disappointment of the day. There was always plenty going on, and even if you just wanted to sit and relax in the grandstand you could still enjoy live music on the big screen and constant arrivals and departures by Chinooks, F-50s and C-130s. There was constant movement of aircraft on the ramp. Photo: Adam Landau

Organisation of the event was simply superb: I left the Open House when the commentator was warning of a 2-3 hour queue on the shuttle buses, but in reality, the queue took me just 15 minutes! What’s more, the queue snaked through the RSAF museum – what better way to wait for a bus than by taking a leisurely stroll between A-4SU Super Skyhawks and BAC Strikemasters? The buses were mostly coaches, with a single door that allowed only one person to board at a time. Had they used SMRT bendy buses like the Singapore Airshow, six people would have been able to board at once, making things even faster. But despite that minor gripe, it was all in all a fantastic day, and one I enjoyed hugely. The aerial display does need to be changed after many years of staying the same, and I personally would like to see the length of the display doubled. So would I go back if they were to host another one next week? Probably not. But if it were to become an annual or biannual event, I’m sure it would be extremely popular.

Adam Landau is a Singapore-based student and aviation journalist from the UK. He is also the founder and editor of This is Flight.