From September 6 to 8, 2019, we attended the third edition of the largest airshow in Canada’s capital region Aéro-Gatineau-Ottawa 2019, at Gatineau-Ottawa Executive Airport – just 15 minutes from the downtown Gatineau-Ottawa. As well as attracting its largest crowd in history, this year also saw the show expand from one to three days, beginning with a sunset display on the night of Friday September 6th. 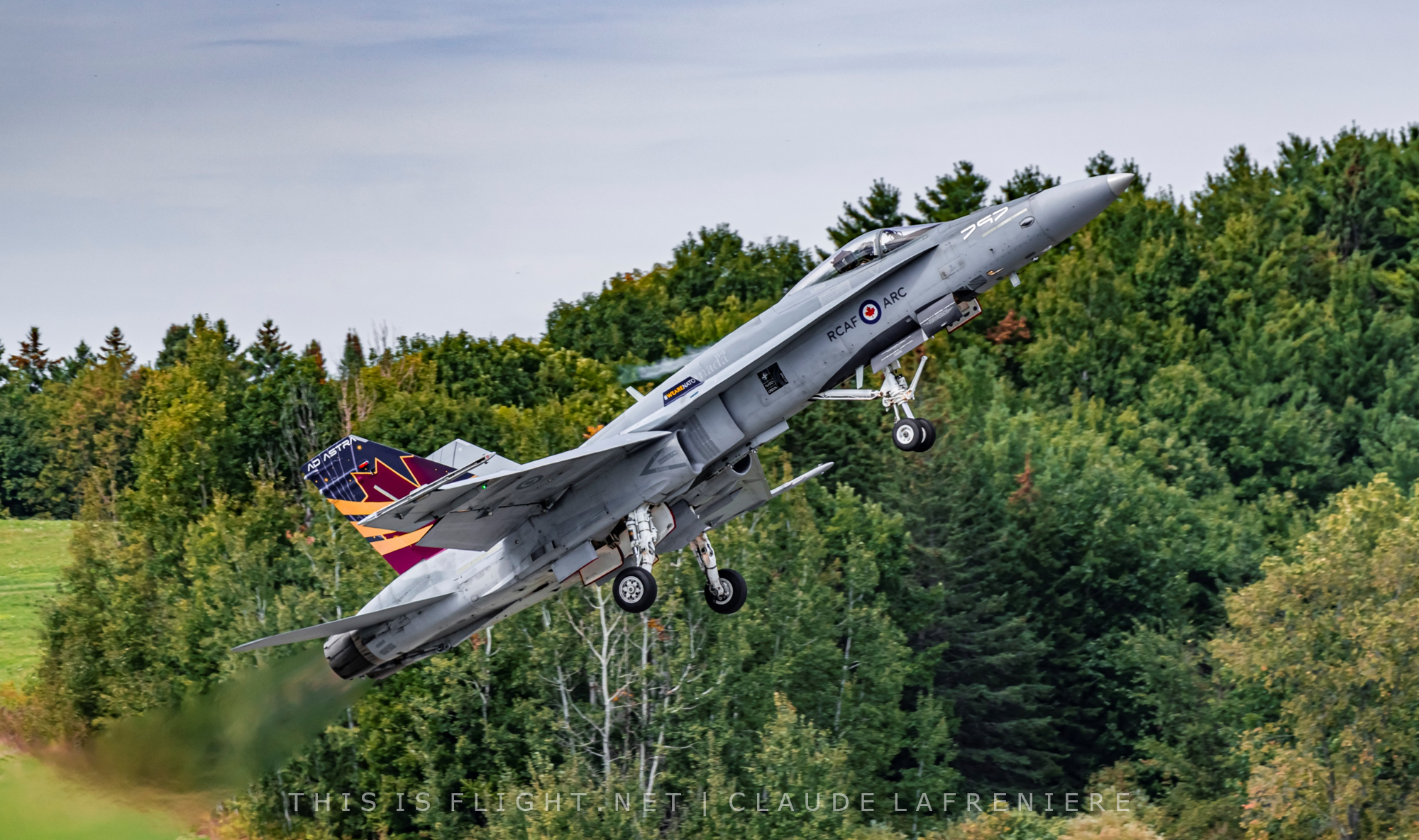 The volunteer organizing committee of Aero Gatineau-Ottawa, which started life as Wings over Gatineau in 2017, have managed In just a few short years to build their event into one of the most important airshows in Canada. This year, the organizing committee staged not one, but two separate world-class shows in the space of less than a month; first, a smaller-scale airshow featuring the debut performance of the RAF Red Arrows’ Western Hawk ’19 tour, followed by a full scale airshow the following month, which was headlined by the Canadian Forces Snowbirds and the first display in the region of the F-35A Lightning II. 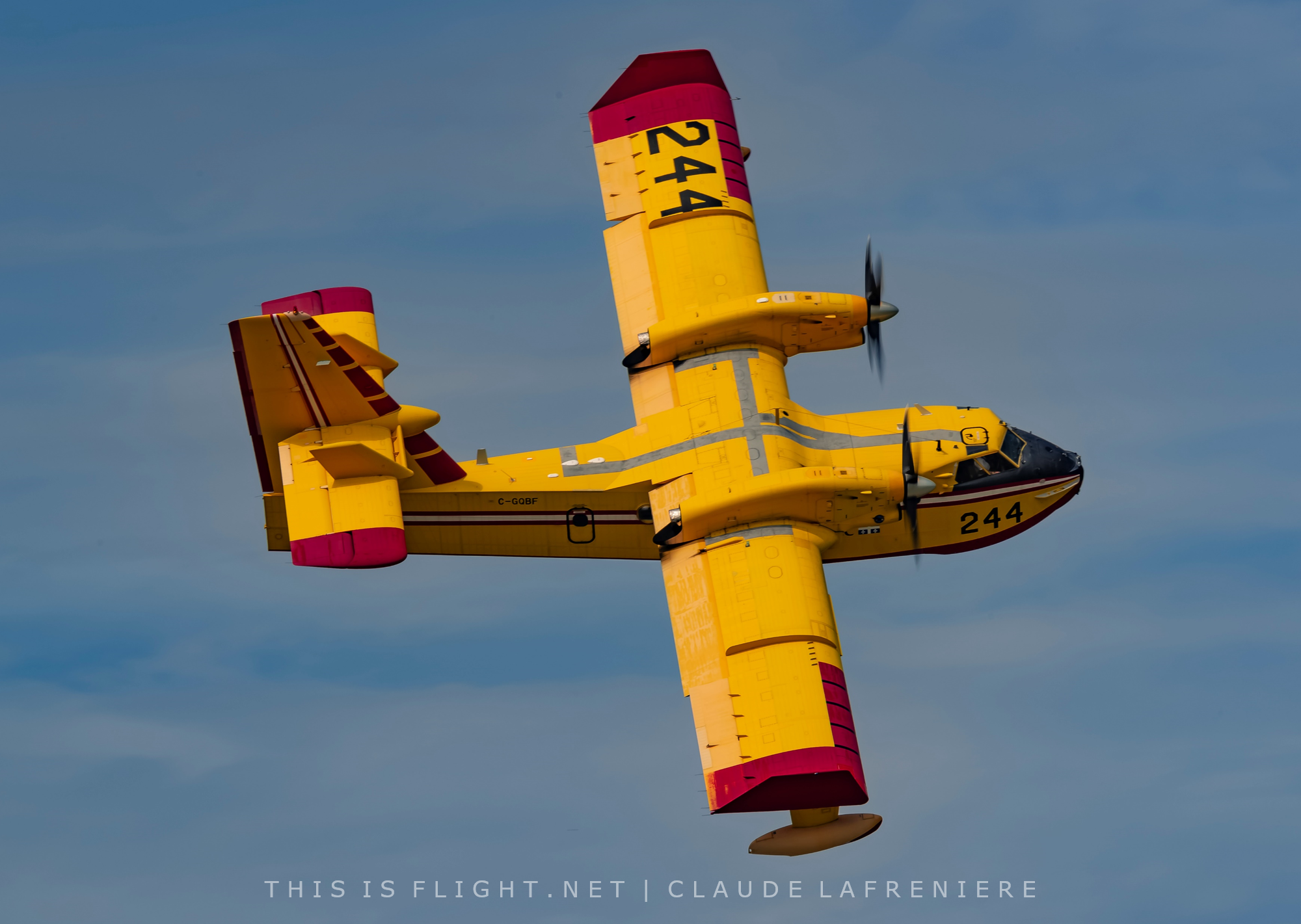 The major distinction of this airshow is the small size of the airport, which allows spectators to see the performers close-up on the ground – the performers’ planes are parked just a few meters away from the crowd. However, the 6,000-foot-long runway still allows a wide range of aircraft to operate from the airport, from the as the CF-188A Hornet to the Airbus A400M. 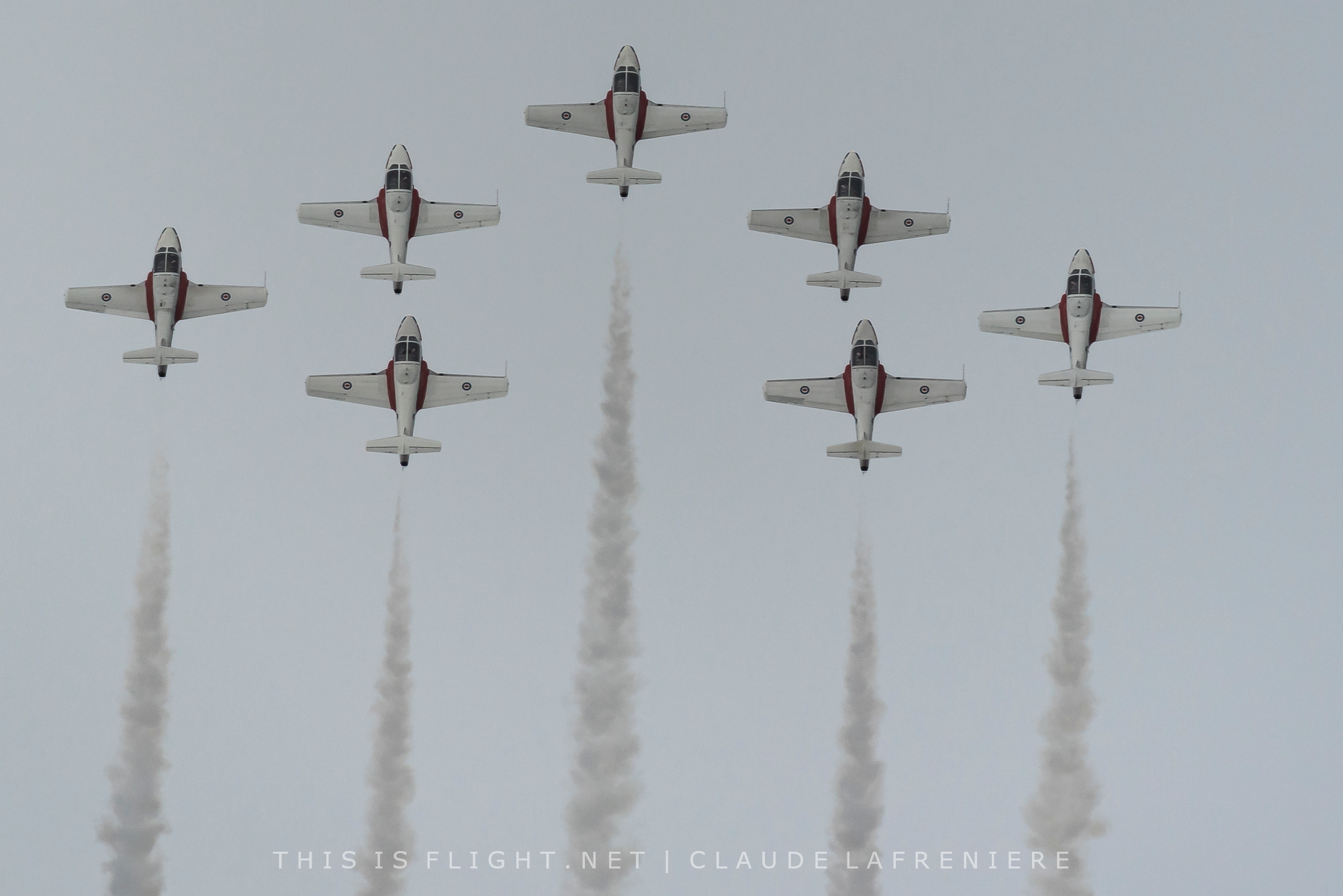 The latest official figures indicate that more than 20,000 people attended the show during the three days of the event, in spite of the rainy periods on Friday and Saturday. Luckily, the weather did not cause major complications for the pilots, nor delays in the conduct of the air show, and only a small number of performers had to fly their low shows due to weather. 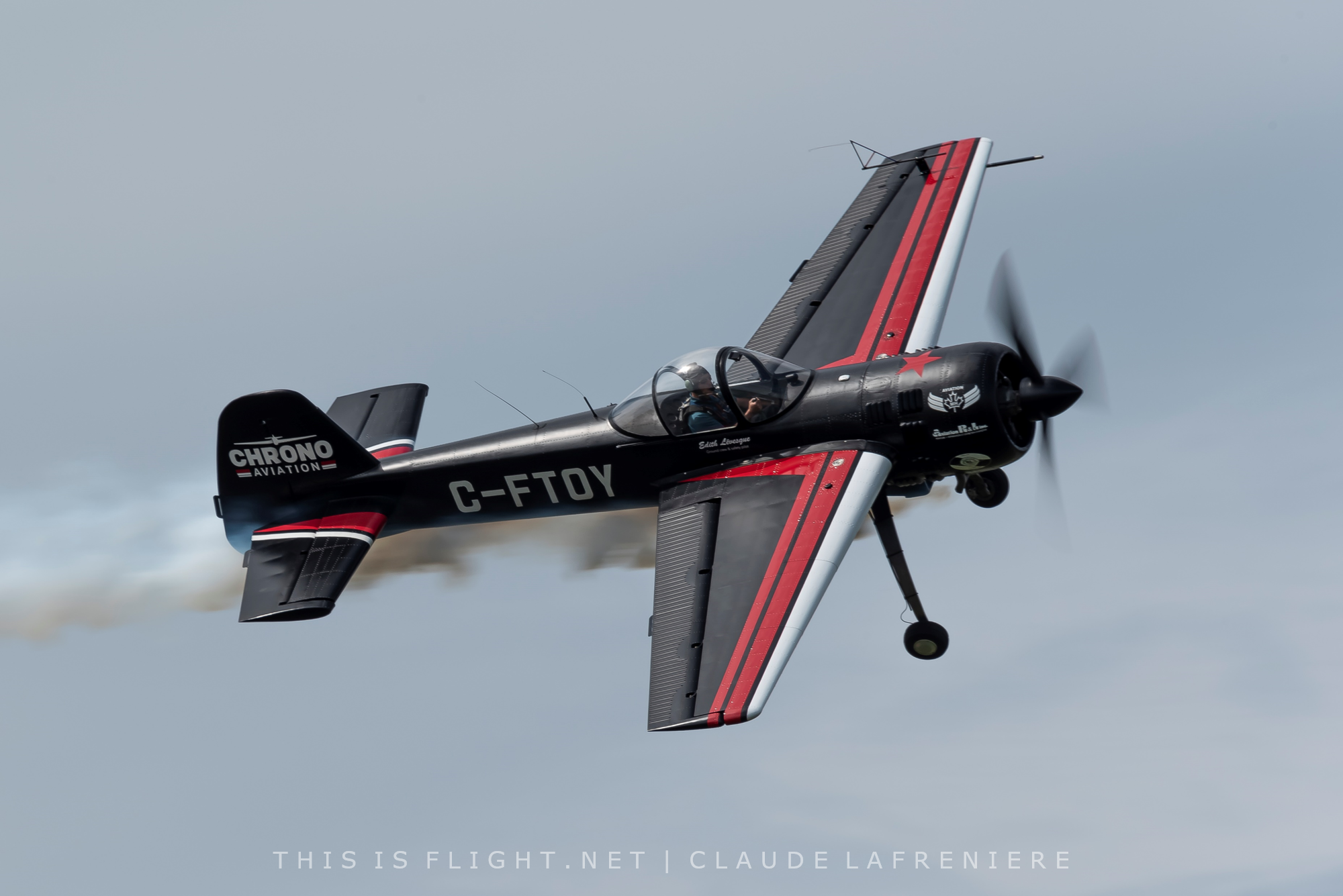 This year, the line up featured high caliber guests in addition to aforementioned Snowbirds, F-35 and CF-18 demonstrations. You cannot have an airshow in the Vintage Wings of Canada’s backyard without their aircraft and pilots being a major part of the flying display, and this year, former astronaut and CF-18 fighter pilot Commander Chris Hadfield took command of the foundation’s Spitfire Mk.IX for a heritage flight alongside the Royal Canadian Air Force’s CF-18 Demo Team. The foundation also displayed a selection of training aircraft, including the Chipmunk, Tiger Moth, Fairchild Cornell Mk.II, Fleet Finch II and Harvard Mk.IV, all wearing the characteristic yellow color scheme of the RCAF’s training program of the time. A quartet of heavier warbirds were also displayed, including the P-51D Mustang IV, P-40N Kittihawk and Spitfire Mk.XVI, the latter flying in combination with the Mk.IX. The P-40 also performed a simulated dogfight with a replica Zero TORA 101 from Wichita, Kansas. 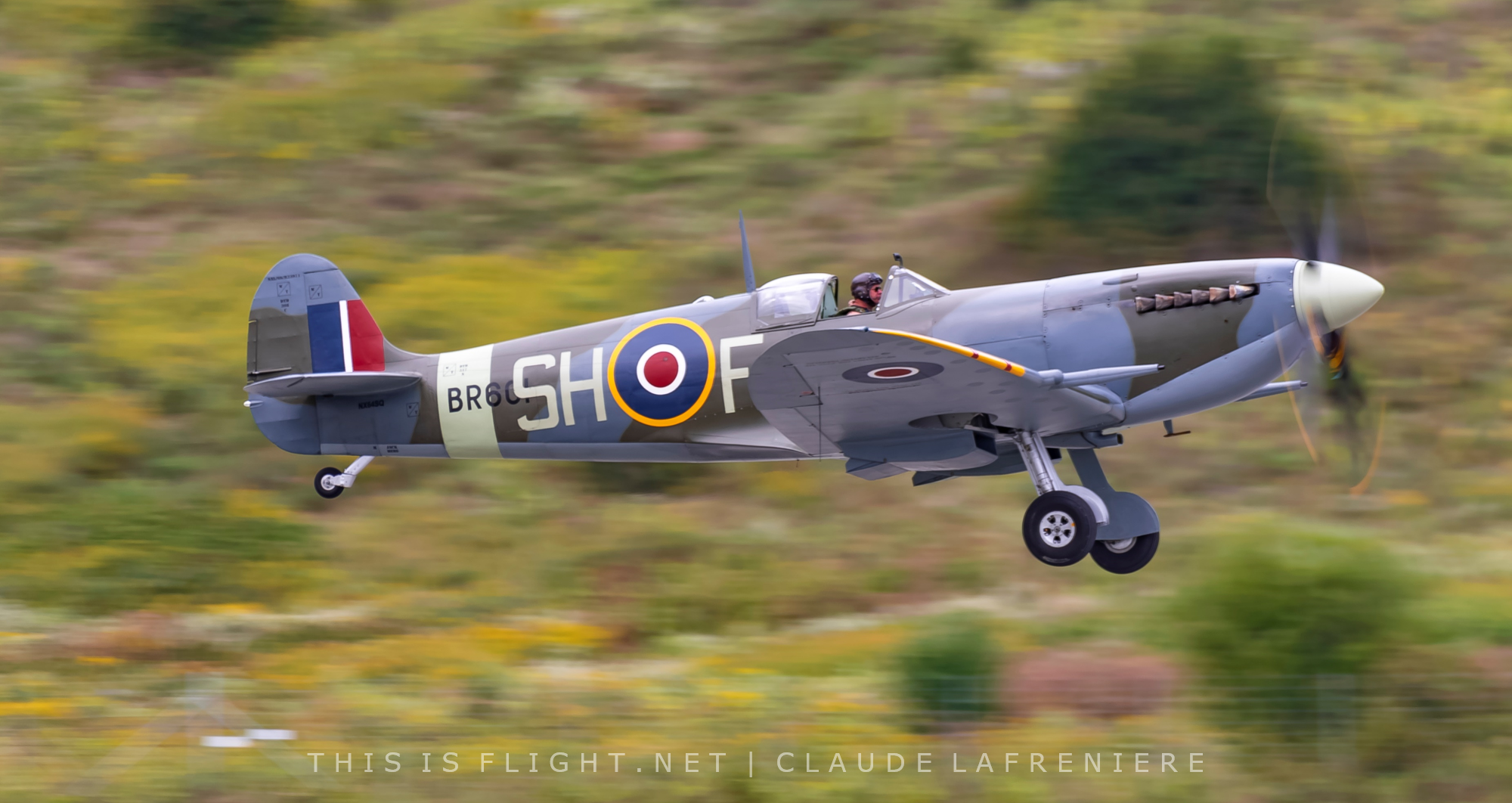 Perhaps the most anticipated performance of the weekend was, of course, the impressive Ottawa debut of the US Air Force F-35A Lightning II Demonstration Team from from Luke Air Force Base in Arizona. The pilot, Captain Andrew “Dojo” Olson, showcased many of the aircraft’s capabilities in an impressive high-energy routine designed by himself from scratch, with the help of several other established airshow pilots. He involved also Lockheed’s experimental test pilot, Canadian and former RCAF pilot Billie Flynn, to polish and design a perfect routine to highlight most of the F-35 capabilities. It was the second time the team had performed in Canada after an earlier appearance at Bagotville CFB earlier this year. 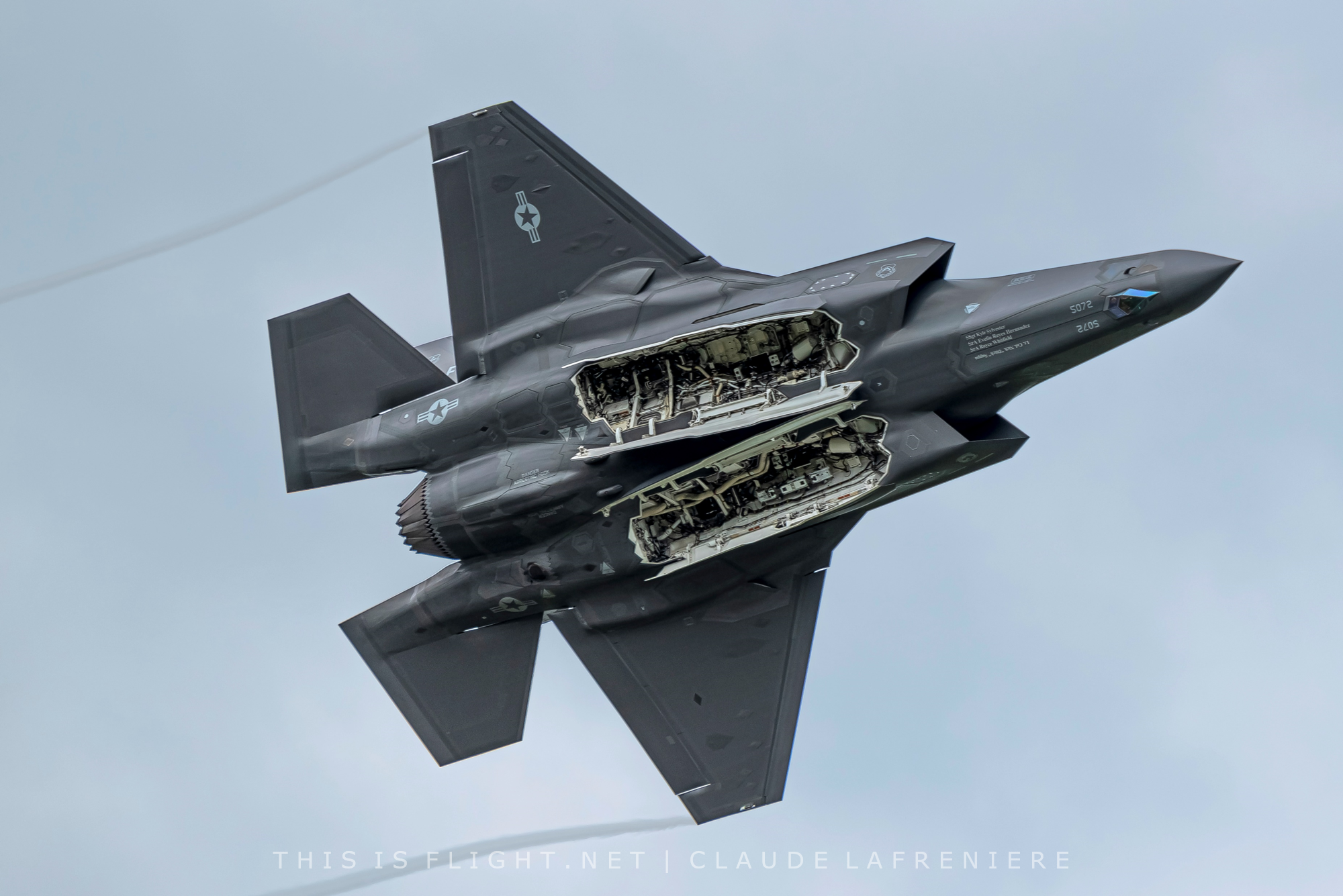 Lockheed Martin, the F-35’s manufacturer, were a sponsor of this year’s show, and had a major presence at the event, distributing an astonishing number of high quality baseball caps sporting the logo of the F-35 and the Canadian flag. They also brought an F-35 flight simulator to the show, to demonstrate to the media and visiting VIPs the strengths of the F-35. With Canada looking to replace its ageing CF-188s, quite possibly with F-35s, it was not surprising that Lockheed Martin was present at an airshow just 15 minutes from downtown Ottawa, where the decision on the new plane will ultimately be made. 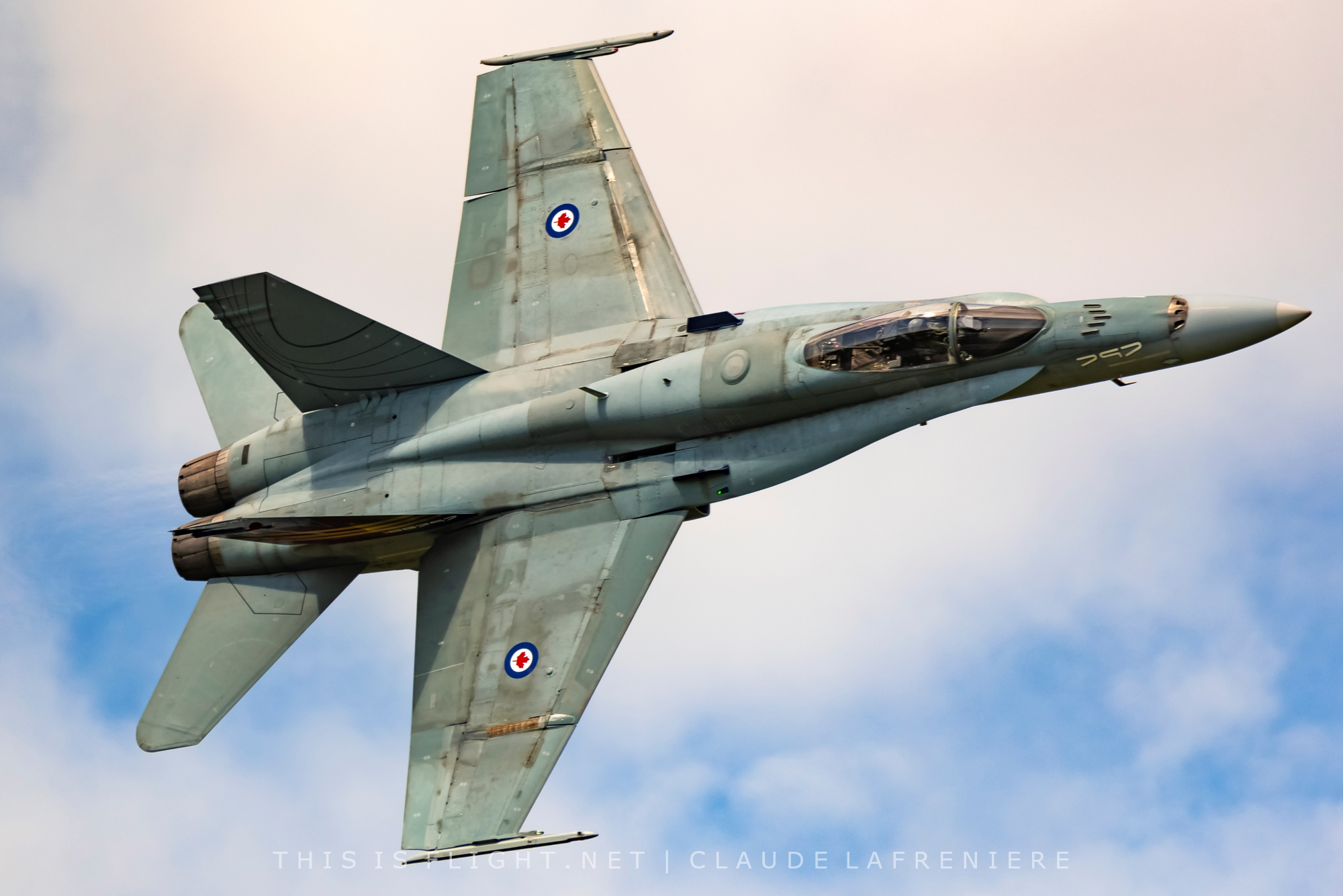 Immediately after the F-35A, Cpt. Brian “Humza” Kilroy took to the skies in the CF-188A Hornet for his own impressive performance. As well as flying on the two main show days, “Humza” also performed in the rain on Friday night for a thrilling sunset demonstration, his afterburner visible for miles in the darkening sky. 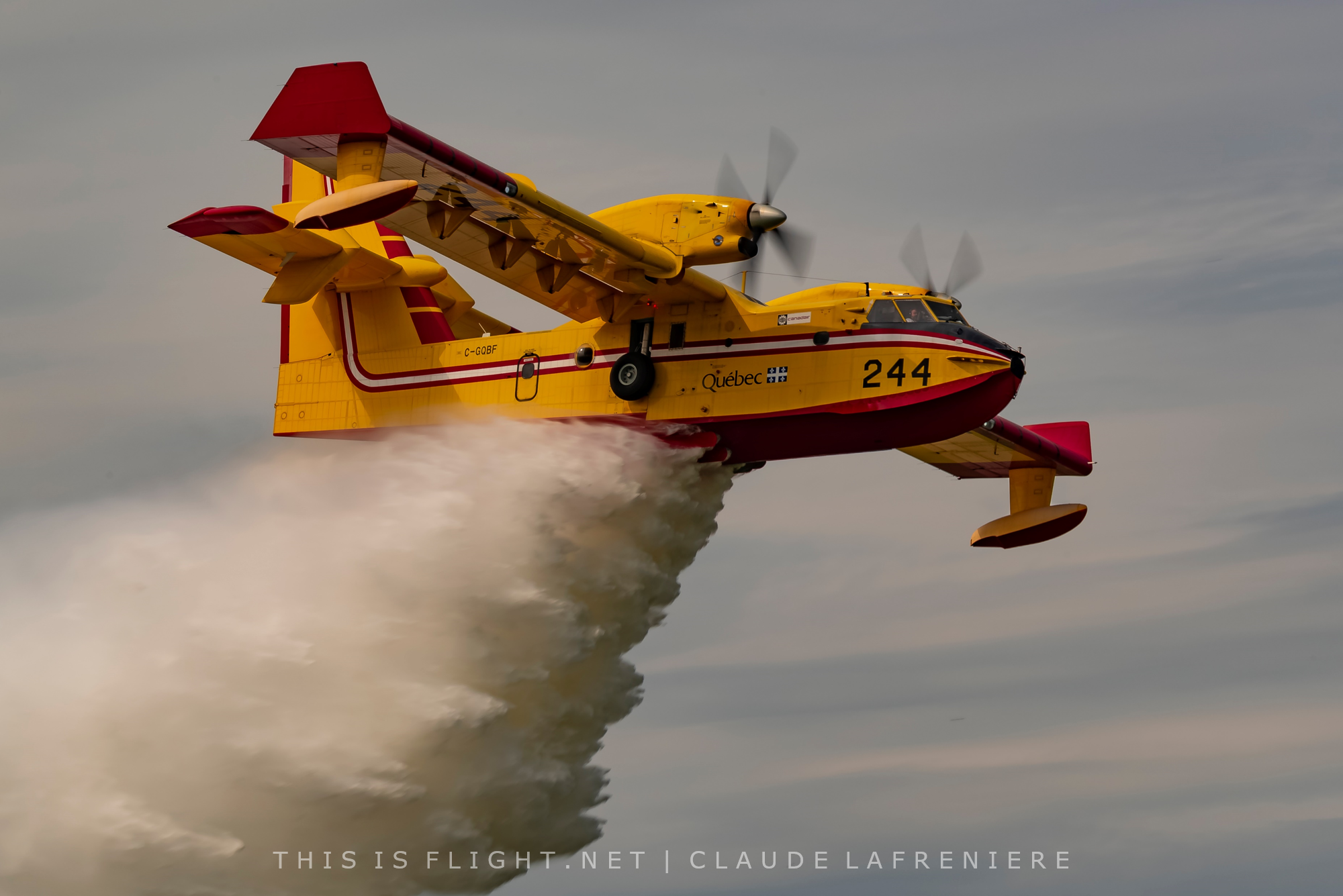 One of the surprises of the weekend was the presence of the Government of Quebec’s “Super Scooper” water bomber, the Canadair CL-415, which demonstrated its power and maneuverability at low altitude, followed by a 6140-liter water drop by the edge of the runway. 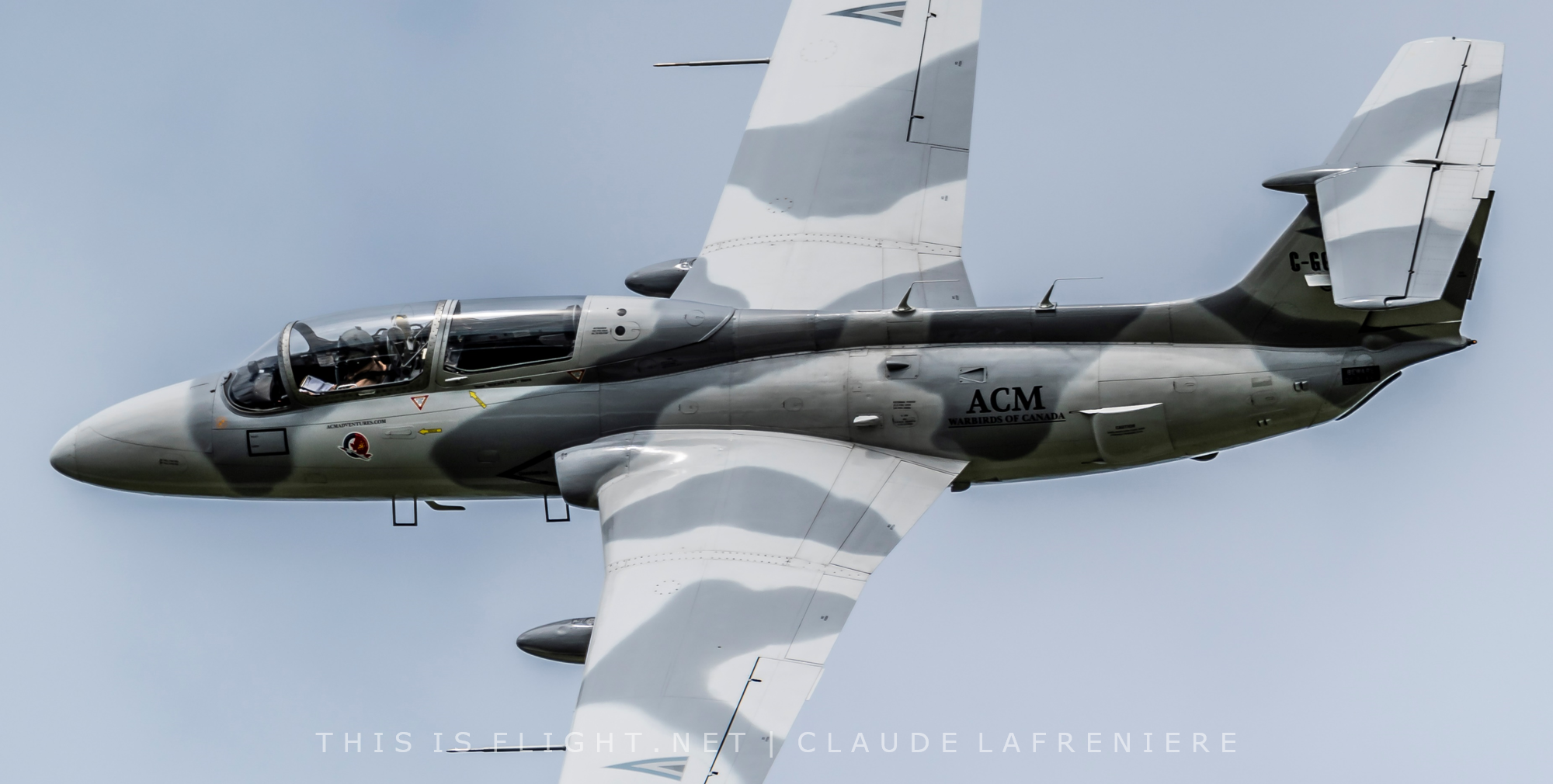 The airshow also included a variety of displays from civilian operators, including a pair of Gatineau-based Aero L-29 Delfíns from ACM Warbirds and a short appearance from the Viking Air DCH-2T Turbo Beaver, the latest incarnation of the legendary Canadian bush plane. Of comparable role, but an earlier era, C-45 Expeditor “Canadian Queen” also gave an elegant solo demonstration, the sun glinting off her polished metal exterior. The crowd also enjoyed a trio of solo aerobatic displays, including Rick Volker in his Sukhoi Su-26M, 75-year airshow veteran Manfred Radius in his Salto H101 glider and Martin Hivon in the Yak-55M. 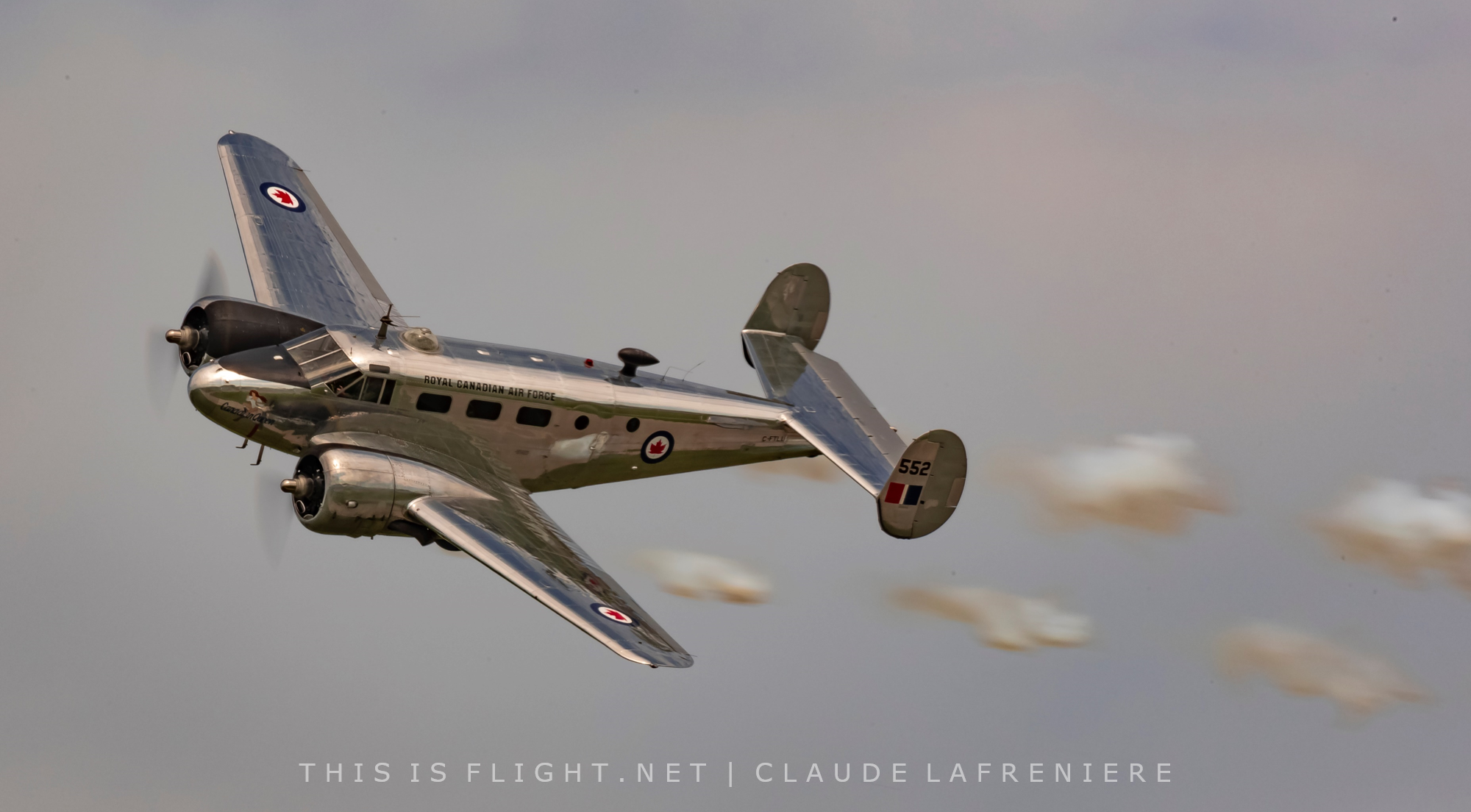 The closing performance of the show was reserved for the 431st Air Demonstration Squadron, the Snowbirds, lead by Snowbird 1 Major Denis Bandet. They performed their delicate aerial ballet with the precision of a metronome with their nine CT-114 Tutors. The 57-year-old aircraft remains a very precise and reliable aircraft for the team, despite being almost a decade overdue for replacement, but the team are due to continue operating the type until 2030, subject to avionics upgrades, to avoid the almost $1bn cost of replacing the fleet. 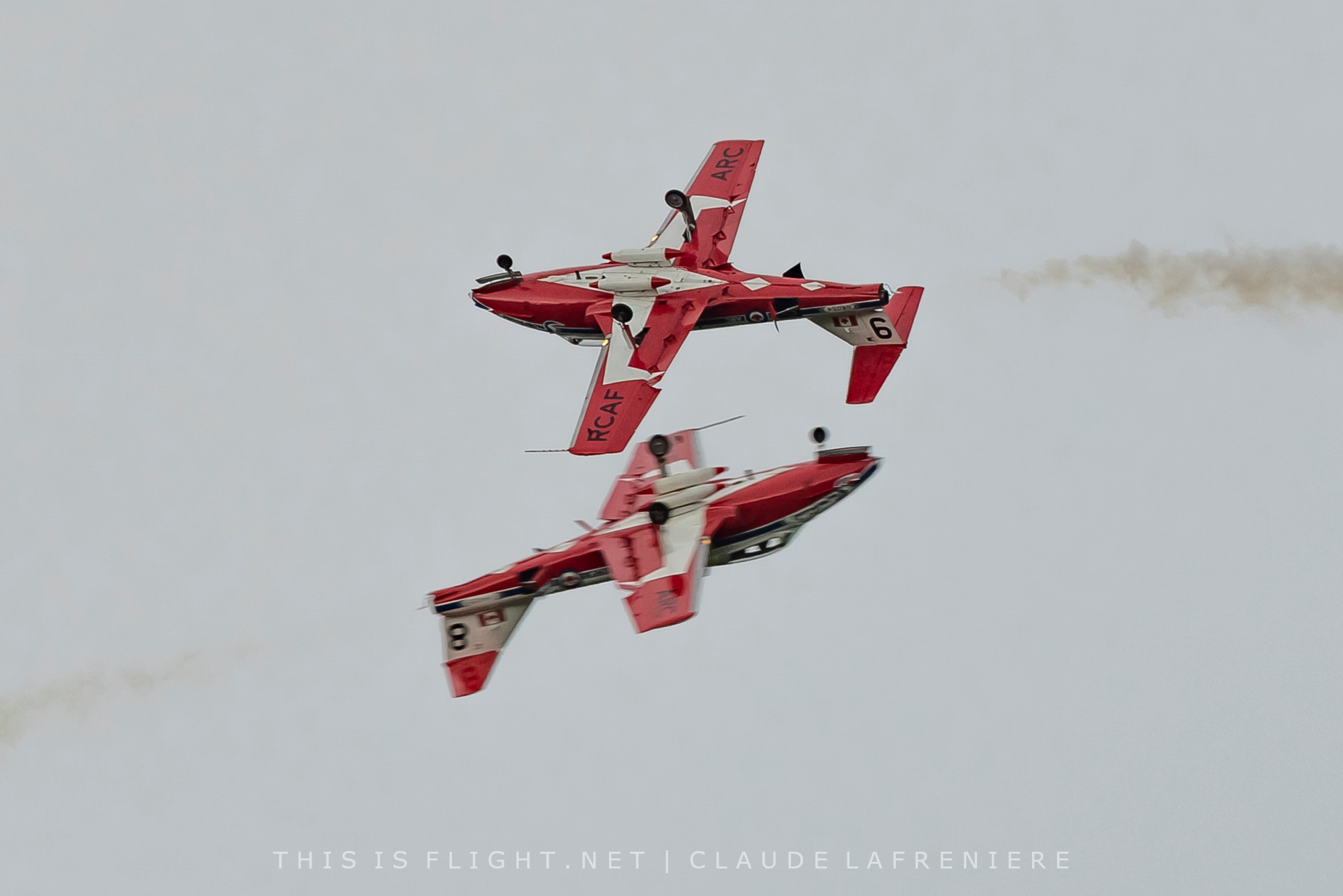 In addition to the flying display, the event also included a static display and ground activities. Spectators could visit the Vintage Wings of Canada’s hangar, which included the Corsair and Lysander, among others, in addition to the aircraft participating in the flying display. Other aircraft in the dedicated static display included a brand new Canadian Coast Guard Bell 429, RCAF CH-146 Griffon, Top Ace Dorner Alpha Jet and the Pitts Model 12, to name but a few. With many of the performing aircraft parked near the crowd and taxiing part the spectators during the display, there were also opportunities aplenty to photograph them on the ground. There was also an exhibition of military vehicles and a troop of WWII re-enactors, who performed mock battles depicting Canadian and German troops. 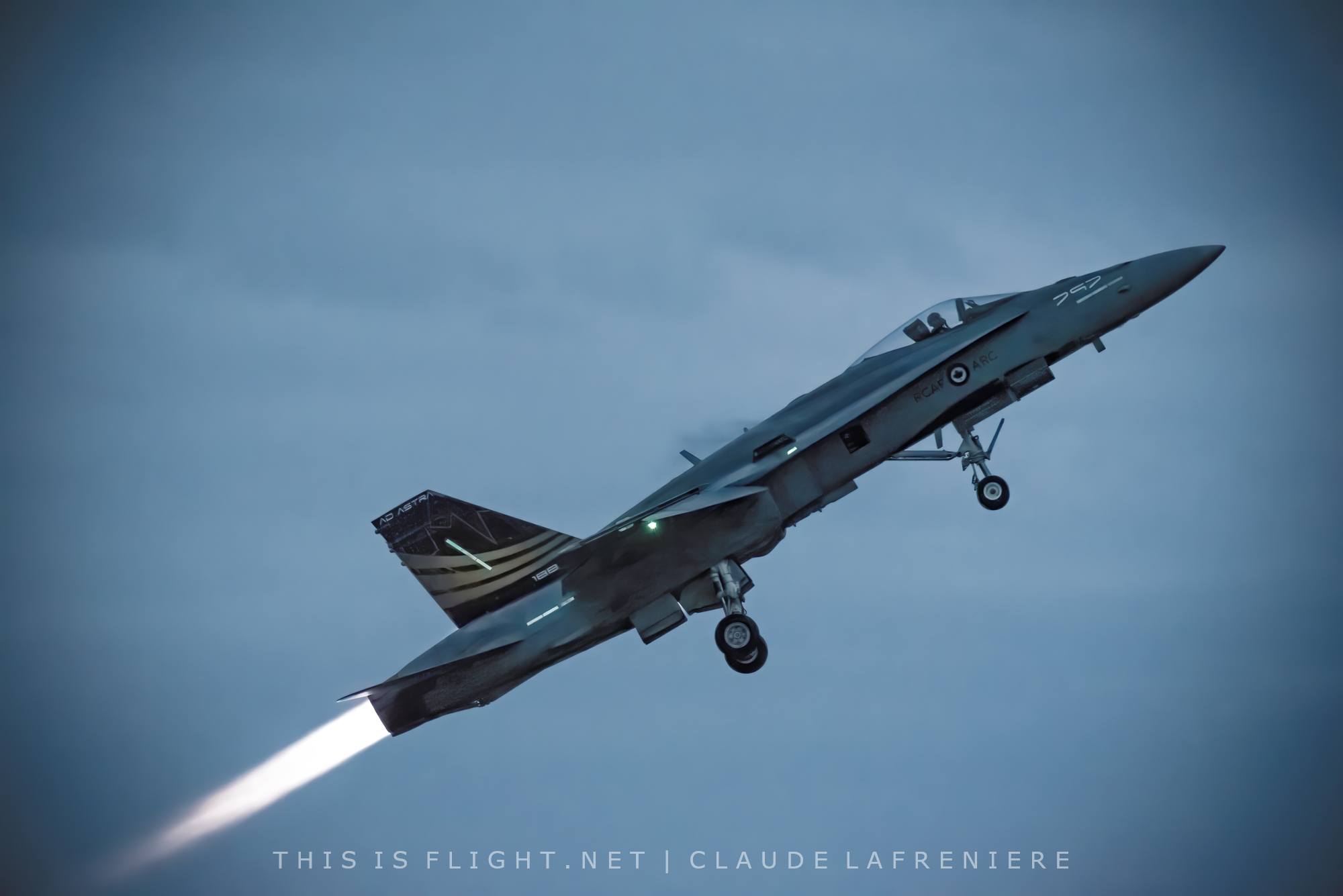 Aero Gatineau-Ottawa 2019 was a high-quality airshow with a spectacular and varied flying display, and a much-expanded event since its previous edition. The visit of the F-35, particularly, was much appreciated by the Canadian crowds, and was an ideal opportunity for Lockheed Martin to exhibit their latest fighter design, and the close proximity of the crowd to the performing aircraft can rarely be found elsewhere.