The complete fifth series of Airshow Dispatches, comprising ten episodes covering airshows around the world, is now available free to view on This is Flight. The series includes airshows in the UK, USA, Australia and France, featuring highlights such as the Black Eagles’ European tour, the only airshow appearance of NASA’s “SOFIA” flying observatory, this year’s outstanding Belgian F-16 solo display, the lumbering Nord Noratlas, a gathering of four P-40s, and a gamut of rare classic jets, from the Vampire to the T-33, Sabre and Paris. 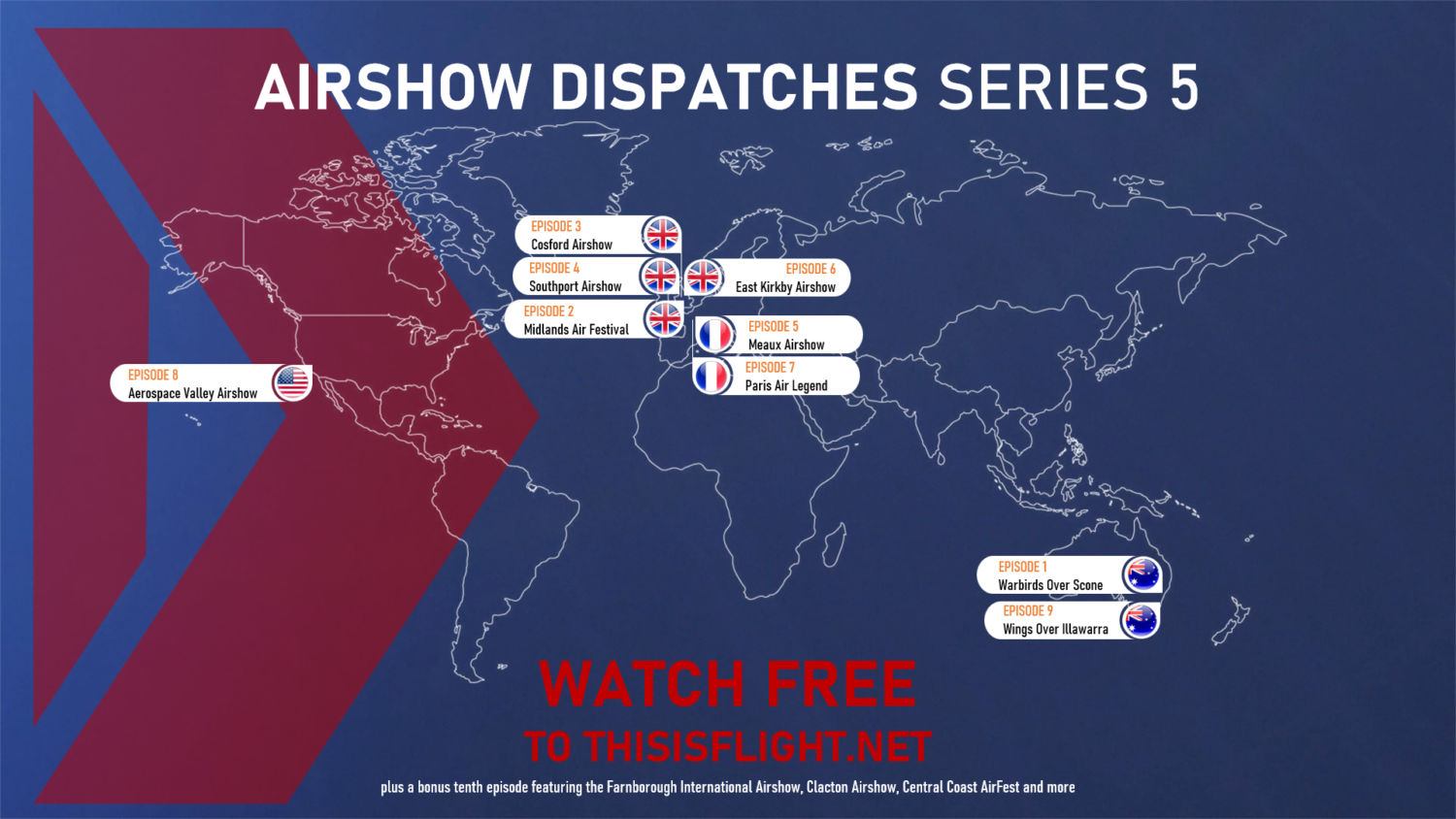 The sixth series of Airshow Dispatches will feature a further ten episodes, filmed in countries such as Italy, Poland and the United States. The first episode will be published in March 2023; you can find more information at the end of the page.

A home show for the Paul Bennet Airshows collection, Warbirds Over Scone featured many aircraft from their hangars, as well as several excellent visiting warbird performances. This included the Focke-Wulf Fw190 and a historic gathering of four P-40s – the largest Australian gathering of the type since WWII. Newly-restored Spitfire MH603 made its airshow debut, and, at the end of the show, ten warbirds joined together for a memorable balbo.

The first major airshow of the UK season, the Midlands Air Festival was the UK debut of the Red Arrows’ new seven-ship routine. It was also the first opportunity to see the BBMF’s Lancaster, which has barely been seen in public since August 2019. Civilian highlights included Vampire T.11 WZ507, making its first public air display appearance in eight years, and from Belgium, the Bronco Demo Team, visiting the UK for their first public display since the pandemic. Team Raven also debuted their new six-ship show, while Tiger 9 participated with a very rare Queen Bee, in addition to eight Tiger Moths. Twilight displays and hot air balloons also feature.

The Cosford Airshow returned in very challenging circumstances this year, but was still able to provide some memorable moments. The star of the show was Belgium’s new F-16AM solo display pilot, Capt. de Vries, debuting his Dream Viper special scheme display jet, with an outstanding display that included some mind-bending negative-G manoeuvres. France contributed the Rafale Solo Display, and, not to be outdone, the RAF performed an F-35B hover demonstration and a solo display with the Typhoon FGR.4. The Typhoon also performed its Synchro Pair display with one of the BBMF’s Spitfires – the first such performance since 2015. On the civilian side, Historic Helicopters showed off their surprisingly sprightly Wessex HU.5, and also debuted their newly-restored Lynx AH.7 – the first time the type has ever been displayed in civilian hands.

A last-minute trip to Southport was in order to see the first public appearance of the ROKAF Black Eagles during their European tour; the team performed an impressive mini-display. We also got a closer-than-usual look at the Red Arrows from our viewpoint on Southport Pier, and enjoyed a vapour-filled performance by the RAF’s Typhoon FGR.4. Other highlights included the Norwegian Air Force Historical Squadron’s MiG-15 in its new USAF defector paint scheme, a three-ship BBMF display, the Royal Navy’s Wildcat HMA.2, Peter Teichman’s P-51D Mustang and Spitfire BM597, which was based in the area during WWII.

The first of two visits to France this season takes us to Meaux, just east of Paris. Fast jet action came from the Patrouille de France, Rafale C and Fly & Fun. However, the focus was largely on older aircraft, including the SE5a, Fokker Triplane and Deperdussin TT. The show also marked the 80th anniversary of the Normandie Niemen with a large number of Yakovlev types: a Yak-3 and Yak-11, as well as the Yak-52s and Yak-18 of YakoTeam. A DC-3 and Flamant performed an enjoyable two-ship sequence.

The East Kirkby Airshow is a very relaxed affair, with only 5,000 spectators and a slow-paced flying display broken by regular taxy runs in the airfield’s taxyable Lancaster and Mosquito. Joining the Lancaster on the ground was the BBMF’s airworthy example – always an emotional moment at this airfield. The Blades performed a superb display with their four Extra 300s in interesting lighting conditions, and the AeroSuperBatics Wingwalkers provided further smoke and noise. The highlight, however, was arguably Stu Blanchard in the Miles Gemini, providing a masterclass in compact, photogenic display flying in a relatively low-powered, non-aerobatic vintage aircraft.

This time we’re back in France, but just to the south of Paris, at the historic Melun – Villaroche aerodrome. Air Legend this year focussed on classic jets and transport types, featuring such aircraft as the Paris, T-33, Sabre, Vampire, Noratlas, Flamant, Electra Junior and DC-3. A Vietnam War demonstration featured formation and solo displays by MEAC’s OV-10B Bronco and France Flying Legend’s Skyraider, while a second formation came from the PBY-5A Catalina and AJBS Corsair – the latter then performed an outstanding solo display. We also enjoyed a thunderous two-ship Spitfire performance. The Yakovlevs performed a rare six-ship display for only the second time in Europe, while modern military contributions included the Rafale C, three Rafale Ms, A400M and the Patrouille de France. As well as the main feature, you can also watch a short bonus film, recorded aboard Plane Sailing’s Catalina as it flew to France, here.

Opening to the public for the first time since 2009, the legendary Edwards AFB played host to a double celebration this year, marking both the 75th anniversary of the US Air Force and the 75th anniversary of the first flight to officially break the sound barrier, which took place at this very base. NASA provided the most unusual moments of the day, with flybys from several of their aircraft, including their 747SP “SOFIA” flying observatory, making its first and last airshow appearance. The home team fielded a B-1, C-17, KC-135, F-22, F-35 and two F-16s in a combat demonstration, in which the B-1 performed a breathtaking aileron roll. Civilian performers included an outstanding solo display by Rob Holland in his MX-2, demonstrating why he is the 11-time US national aerobatic champion. The show was closed in spectacular style by the USAF Thunderbirds.

One of Australia’s biggest and best airshows, Wings Over Illawarra is the home event of the Historic Aircraft Restoration Society, and they flew some of their largest and most impressive aircraft in the flying display. That included their P-3 Orion, SG-2 Tracker, DHC-4 Caribou and their Super Constellation. Visiting warbirds included the Boomerang, Avenger and Fw190, the latter of which performed a tailchase with a pair of Spitfires. A further memorable moment followed when ten of the participating warbirds joined up for the traditional balbo. The Royal Australian Air Force, meanwhile, contributed the Roulettes aerobatic team and an F-35A solo display.

Featuring the highlights of four events that didn’t, for various reasons, get their own Airshow Dispatches film, this episode includes one hour of airshow performers that we haven’t properly covered elsewhere this year. We open with the Black Eagles, performing a practice display at Boscombe Down at the start of their European tour. Next up, we head to Farnborough to enjoy displays by the A350, 737 MAX and 777X, as well as the Turkish-designed Hurkus advanced jet trainer. At Clacton, we take in sunset shows from the Firebirds and the Red Devils. Then, we head to the Central Coast AirFest in the United States, where highlights include the Red Bull Air Force, US Navy F/A-18F Super Hornet, Jet Waco and an extraordinary USAF F-35A solo display, with more vapour than we’ve ever seen an aircraft generate before!

Airshow Dispatches will return in 2023 for a ten-episode run, featuring airshows in seven countries. We expect to see most of Europe, North America and Asia’s top aerobatic teams over the course of the year, which will see us visit a mix of familiar favourite events and exciting one-off shows in nations we have never visited before. It is a year in which several new warbirds are expected to make their debuts, and the Polish and Italian air forces will mark their centenaries – all of that should make it a season to remember. 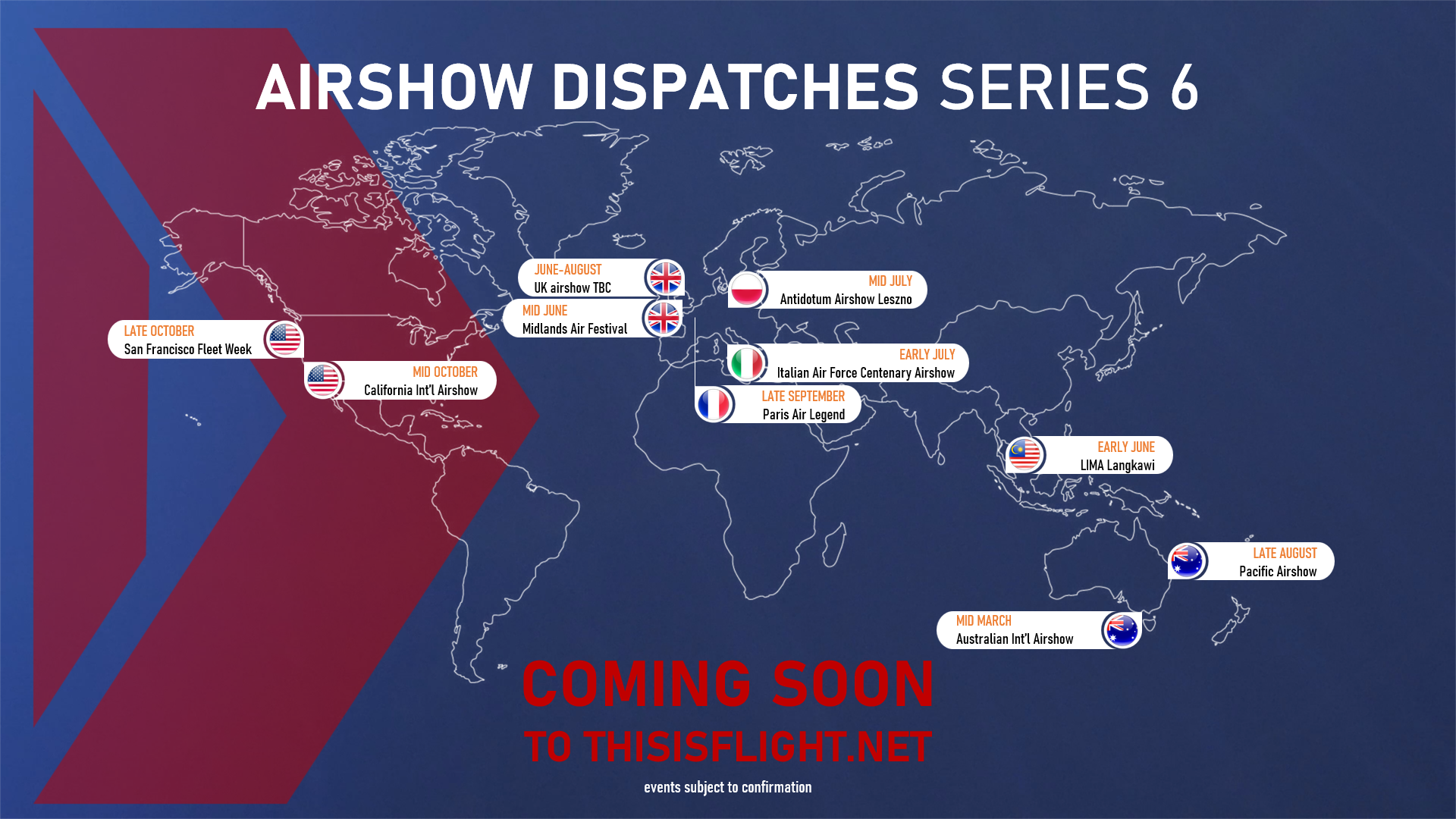 We are also working on projects with our friends at AirshowStuff, including our traditional film from EAA AirVenture in Oshkosh and an Airshow Action 2022 mini-series. Both will be published in the first quarter of 2023.