The PC-7 TEAM is an aerobatic team of the Swiss Air Force, alongside the Patrouille Suisse. The team flies nine NCPC-7 training aircraft in its display, and is known for its graceful, precise and imaginative display routine.

The PC-7 TEAM made its debut in 1987, with nine volunteer pilots. The team was officially established in 1989 to mark the Swiss Air Force’s 75th anniversary. It has displayed regularly at international events since 1992. They upgraded from the PC-7 to the NCPC-7 in 2006. In 2014, the team’s aircraft were fitted with smoke generators and the PC-7 TEAM flew a combined 15-ship display with the Patrouille Suisse to mark the Swiss Air Force’s centenary.

The PC-7 Team begin their display with nine-ship turns, passes and wingovers in various formations. The solo pilot then splits off, and eight-ship passes alternate with solo manoeuvres. Later in the display, the formation breaks down into smaller groups, usually twos and fours. The aircraft then re-group for some more challenging formation passes towards the end of the display. The display is accompanied by specially-composed music. Manoeuvres include: 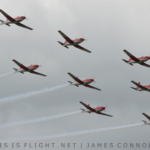 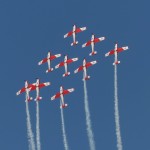 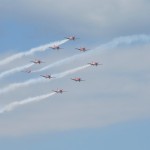 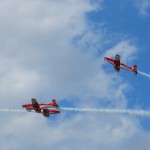