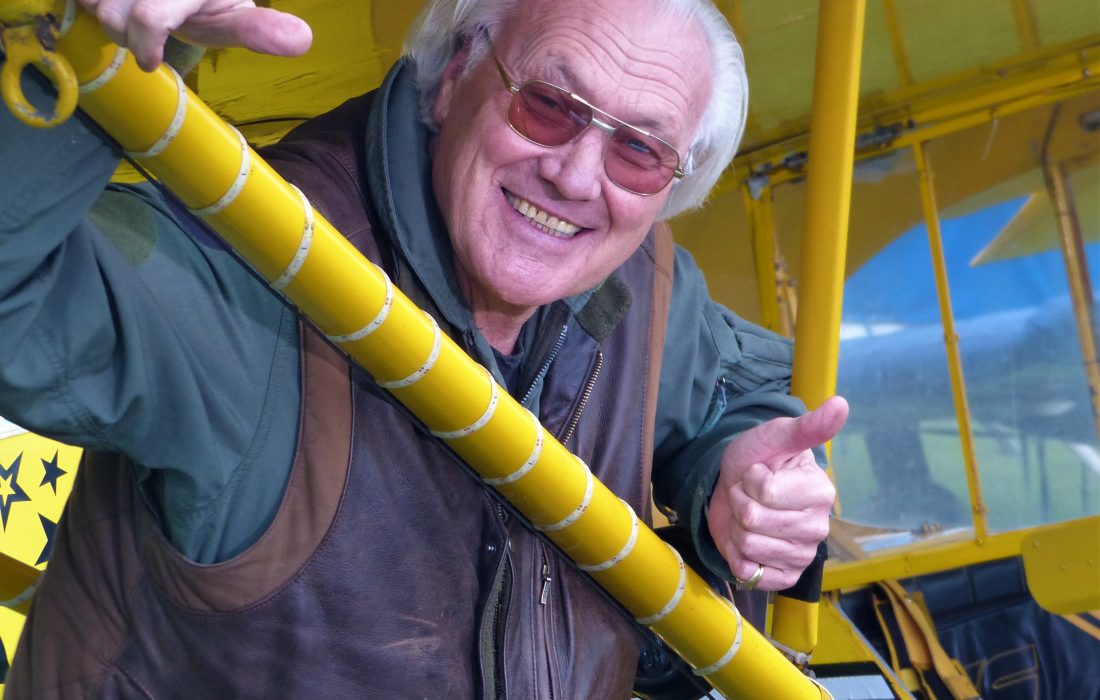 The idiosyncratic 70-year-old is sitting in his yellow and black Piper J3 Cub – an aircraft even older than he is – and gesticulating wildly. It’s fair to say that both plane and pilot have had more than their share of adventures: it is this Cub Brendan uses for his trucktop landing act at airshows across Europe, as well as “crazy flying” and twilight shows with pyrotechnics shooting from the wings.

Today, Brendan is one of the most recognisable and distinctive characters on the British airshow circuit. His latest innovation is his ‘chopperbatics’ display, flying a Schweizer 300 he imported from the United States and modified to carry pyrotechnics. Briefly, Otto could carry more pyrotechnics than any other aircraft in the world – a record only surpassed by the Scandinavian pilot Jacob Hollander at the Australian International Airshow 2019. “But oh, don’t you worry,” Brendan avowed. “We shall move on, and we shall up the ante of what I call in the business the skygasm!”

I stifle a chuckle at the mention of the word, so obviously chosen to raise eyebrows. Brendan launches into an enthusiastic explanation. “The ‘skygasm’ is basically punching out as much pyro as you can in the shortest possible time.” He spreads his hands pointedly. “It’s an explosive effect, hence the ‘gasm’ bit of it.” 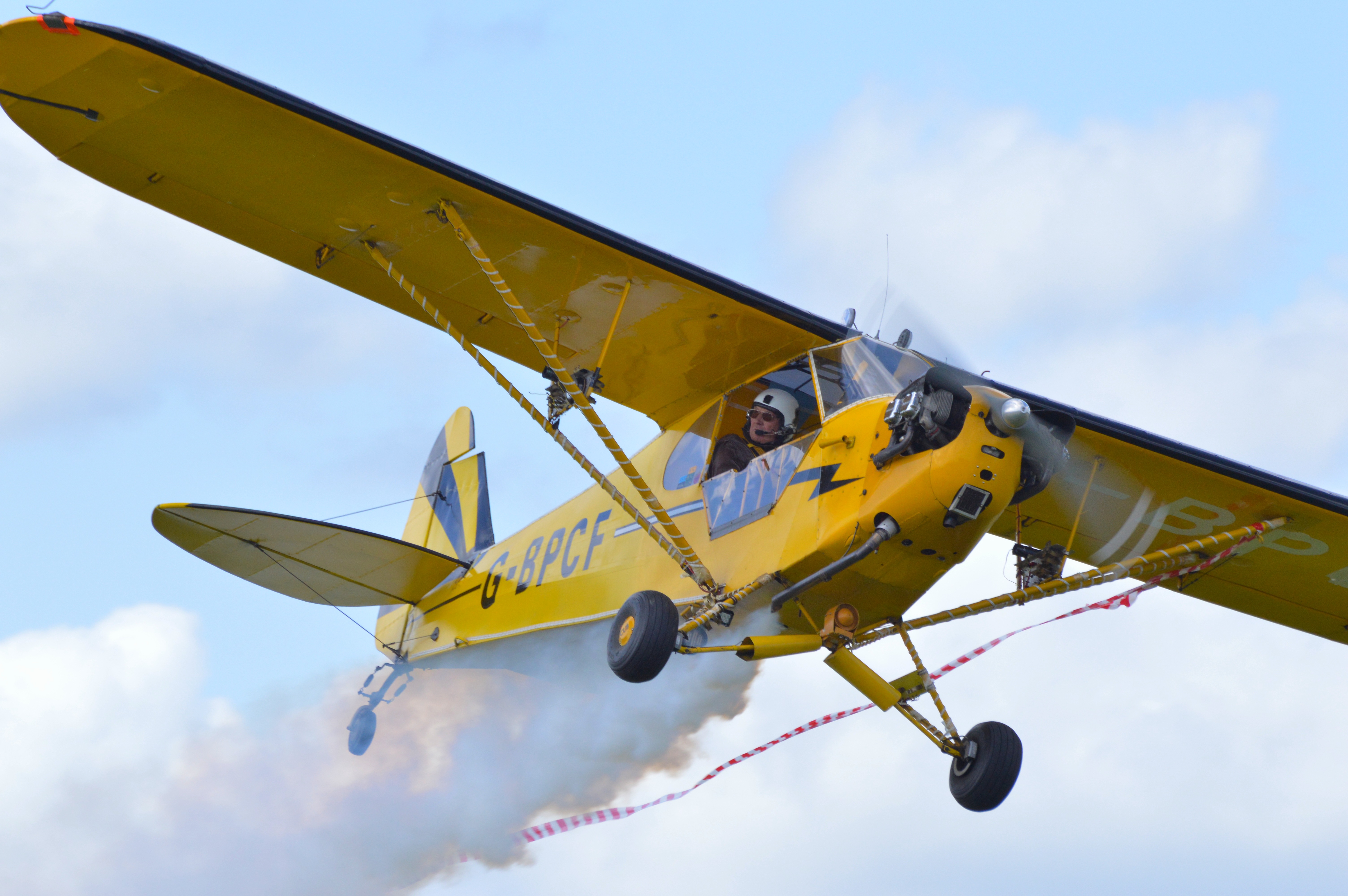 Like the ‘skygasm’, almost everything Brendan does in life is out of the ordinary. He started out as a hot air balloonist and glider pilot before getting involved in an expedition with Ranulph Fiennes in the 1960s. It was during a parachute training jump as part of the expedition that Brendan got his first taste of powered flight.

“I had some issue with my parachute and the jump master said don’t jump,” he explained. “I said to the jump master: go out and have a jump yourself and I’ll just come down with the plane. I was talking to the old boy that was flying this de Havilland Rapide. I leant over his shoulder and I said ‘yes, this is very interesting’. He said ‘have a seat.’ Have a seat? It’s only got one seat, old lad, did you not notice?! And he just got out of the seat, let me sit at the controls and lent over my shoulder. And I thought: this is fascinating, I shall try and work out how to fly these things perhaps instead of jumping out of them.”

In the early 1970s, Brendan learned to fly Fournier RF-5s and Stampe biplanes at Biggin Hill, and says he was able to fly respectable aerobatics long before he mastered the art of landing. He later joined the Tiger Club – an aviation sports club – where he met the leader of the Rothmans Aerobatic Team and was invited to be the team’s commentator and fly the spare aircraft.

A decade later, Brendan set up his own team, the Unipart Duo with John Taylor, flying the Fournier RF-4. “We just started doing this little duo, it was almost like an aerial ballet. It was formation, it was synchro, it was quiet… it was all done to the music of the Pink Floyd, because in the early 80s I taught several of the Pink Floyd members to fly.”

In the mid-80s, Brendan took a break from the airshow scene (“you need to in this game”) and flew Twin Otters in the Antarctic for the British Antarctic Survey, before returning to the UK to begin his next airshow venture: the trucktop landing. He maintains this is easier than it sounds. “Once you’re over the top of the platform, the speed are the same,” he says. “It’s  little bit like landing a helicopter on a rolling oil rig deck – and it does buck about, the trailer. And you have to be smooth, you mustn’t have the death grip. It’s not quite the finger tips, we need the control in the palm.” At this point, Brendan pauses cheekily, gearing up for one of his most infamous lines from his days presenting aviation programmes on television. “We’re making love to the sky, you see… we’re not shagging it!”

That is one of Brendan’s more famous quotes, and he uses it with delight. But quickly, he’s back on topic, talking about the trucktop landing. “Fundamentally, you’ve got to want to be there,” he continued. “If you don’t want to be there, if you don’t feel that you’re going to be reasonably comfortable there, don’t do it. I don’t spread it around a lot, but technically, skill-wise, it’s not actually very difficult to do. If you can land an aeroplane on two wheels for 30 metres, you can do a trucktop landing. It’s about ten per cent skill, and 90 per cent bottle. It’s a long neck job.”

I wondered whether this type of flying worried Brendan at all from a safety point of view. The answer came back in a word: No. “Potentially, airshows are very dangerous,” he elaborated. “In reality, not at all. And you only have to look at the record prior to the recent very rare accident at Shoreham – sixty-three years, yeah? Is it risky? As far as I’m concerned, I’ve been in the game for about fifty years and I can honestly say to you I have never frightened myself at an airshow. The reasons are twofold and very specific: I never ever fly at more than 50 per cent of my potential ability. Therefore, not only am I pretty relaxed, but if something bad did go wrong, I’ve got all that 50 per cent of spare capacity to use. And the second one that’s always kept me from the edge is: I’ve always been a little bit uncertain about my own abilities.” 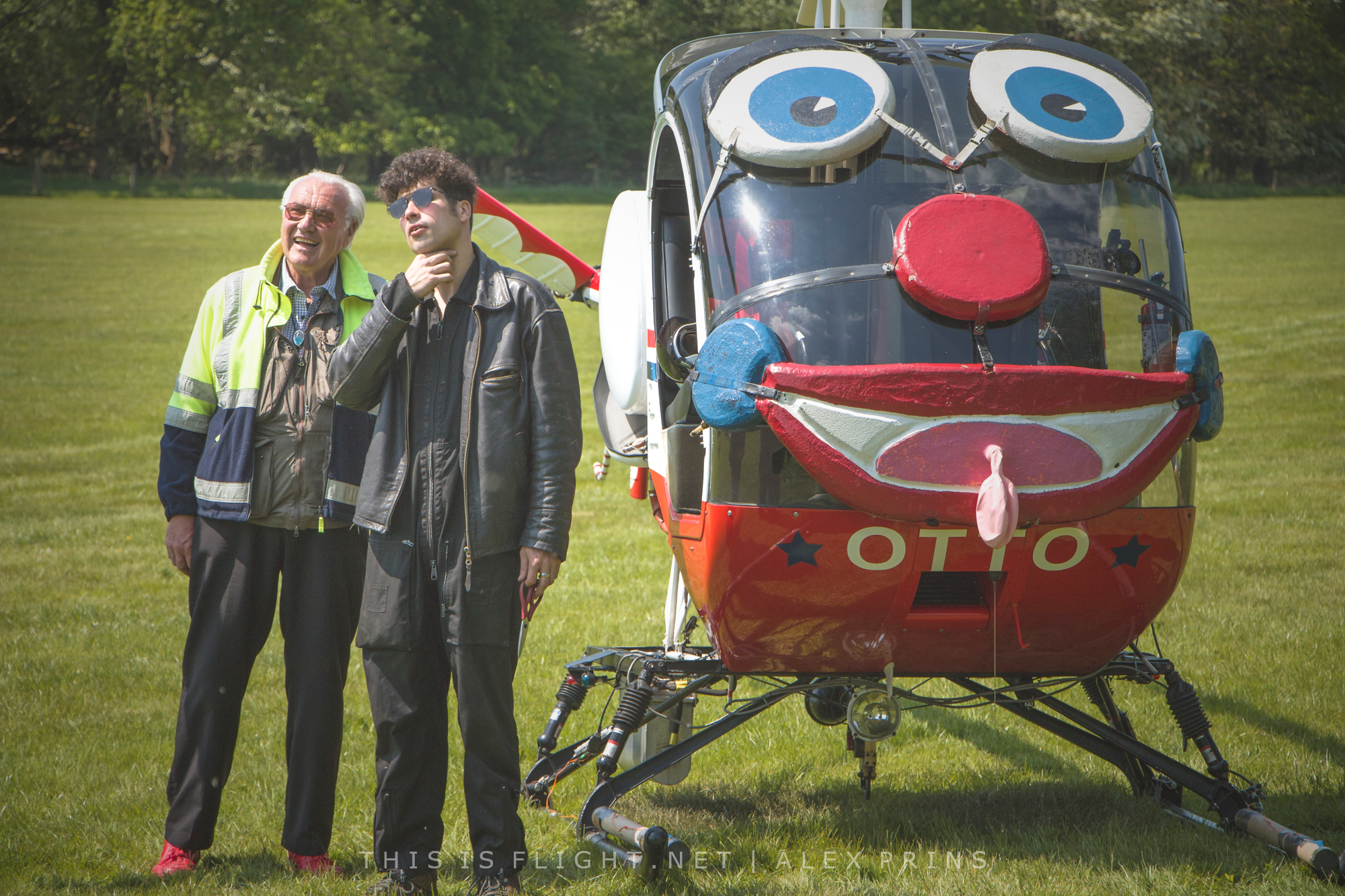 More recently, Brendan’s fascination has been with helicopters, partly inspired by the American airshow pilot Roger Buis, who flew a Schweizer 300 known as ‘Otto the Helicopter’ – a machine Brendan now owns himself. “Right, helicopters,” declares Brendan. He grins wickedly. “Henry the Eighth was a great lad with his chopper, in more ways than one. Don’t think about that for too long. But think of the joy! You can [he imitated the movement with his hands] neeeeooowwww-donk! Come to a halt in the air! And having come to a halt in the air, I can fly backwards! You can do all sorts of extraordinary things, and you can land anywhere, on a piece of ground almost of the size of a literal postage stamp. They are fascinating machines,” he muses, again gesturing with his hands. “And they’ve got all these, sort of, bits, whirling around all over the place. 4,000 bits flying in loose formation.”

I bring the subject back to airshows, and to Roger Buis’ chopperbatics. “It looked such a lot of fun,” said Brendan. “I thought I would go down that road. I got a wonderful man called Dennis Kenyon, who is still going at 87, one of the top display pilots and handlers of helicopters in the country. He taught me how to do these ‘chopperbatics’.”

Brendan has been displaying Otto for several years now, though, and I can’t help wondering where he might go next. “I’ve always been into what’s called ‘flying circus’. Wing-walking, landing on top of trucks, chopperbatics with a helicopter, crazy flying, night pyro shows, light shows and that kind of thing. A lot of that has disappeared. Why had it not been done before [recently]? I just think that people hadn’t thought it. You know, you have to be a little bit imaginative.”

Imaginative, yes – but also perhaps just a tiny bit mad? As Brendan bursts into a rousing chorus of “only mad dogs and Englishmen go out in the midday, out in the midday, out in the midday sun!” it certainly seems like a distinct possibility. And it certainly applies to one of Brendan’s most outlandish ideas, and one he hasn’t yet managed to turn into a reality: the exploding house. “If anybody walks up to the Belgrano [the Civil Aviation Authority] other than yours truly and asks to fly through an exploding house they’d take you straight down to the medical department. But no, no! Sit down, tell us…”

The idea is very simple: a full-size polystyrene house sits on pneumatic rams and a trench filled with explosives in the middle of the airfield. As Brendan flies directly towards the house, he fires the rams using a button on the control column, causing the house to detonate in an enormous fireball.

“Then also the best bit is the wheels on the aircraft get blown off,” Brendan added. “And then I have to put them back on again by flying over the top of a truck and somebody hands up a set of wheels. Believe me, it’s good. But I haven’t managed to get that one going yet, that’s saved up for the future, so if anybody fancies having a go at that, you’re welcome!” Watching an aircraft fly through an exploding house and blowing their own wheels off has suddenly become something I want to see very badly indeed. And there’s only one man in Britain who I can imagine doing it. I wonder if you’re thinking of the same name I am?