The first Duxford airshow of the season ran during the 26th-27th May. This review is compiled from my own observations and from other guests on the first day of the show.

As I looked at the aircraft participation list I had some reservations on the content for this early season show. Most notably, I noted a lack of home grown aircraft – one Spitfire, no Hurricane and little in the way of support from the modern-day RAF, who displayed the Chinook HC.4 on Saturday but were not present at all on Sunday. I found this strange and a bit of a let down given it is the air arm’s centenary year. It was, in fact, the French Air Force who were the primary military supporters of the show, providing three acts which included the Patrouille de France, although they performed on Sunday only. 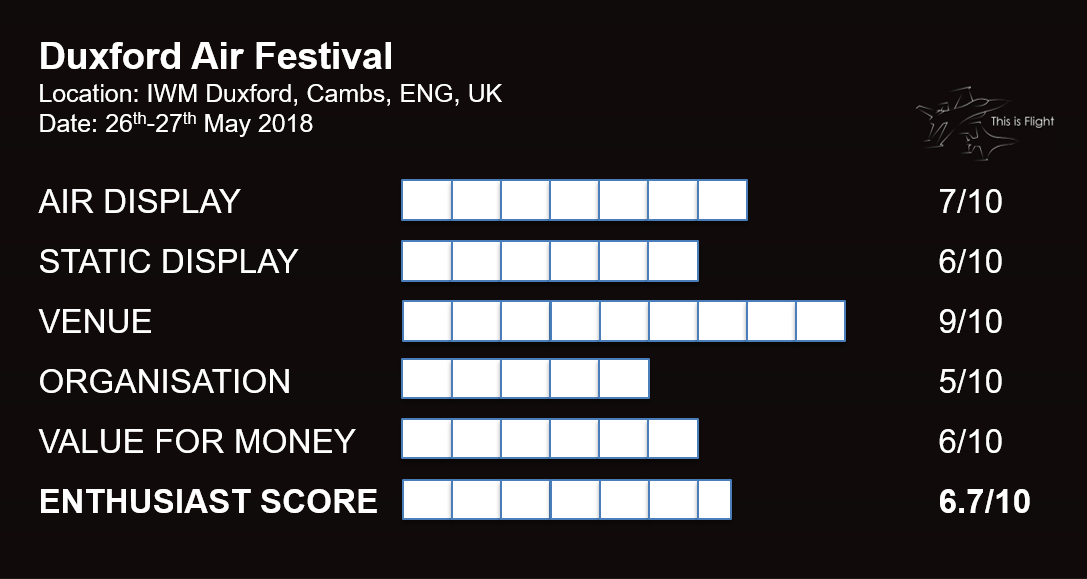 After a misty start, the weather cleared through the day with blue skies for much of the afternoon, although the wind gave the pilots a challenge.

The flying got under way at 13:00 with the second UK display of Republic P-47D Thunderbolt “Nellie” since her return from the USA. Anticipation was high for this aircraft and its display, but I am afraid the anticipation was not fully rewarded: whilst it was a joy to see this aircraft, the display itself failed to impress. The routine lacked drama and excitement, and much of it was well away from the crowd line. The rolls and turns were commenced and concluded over the field beyond, making it one of the most distant displays of the day. 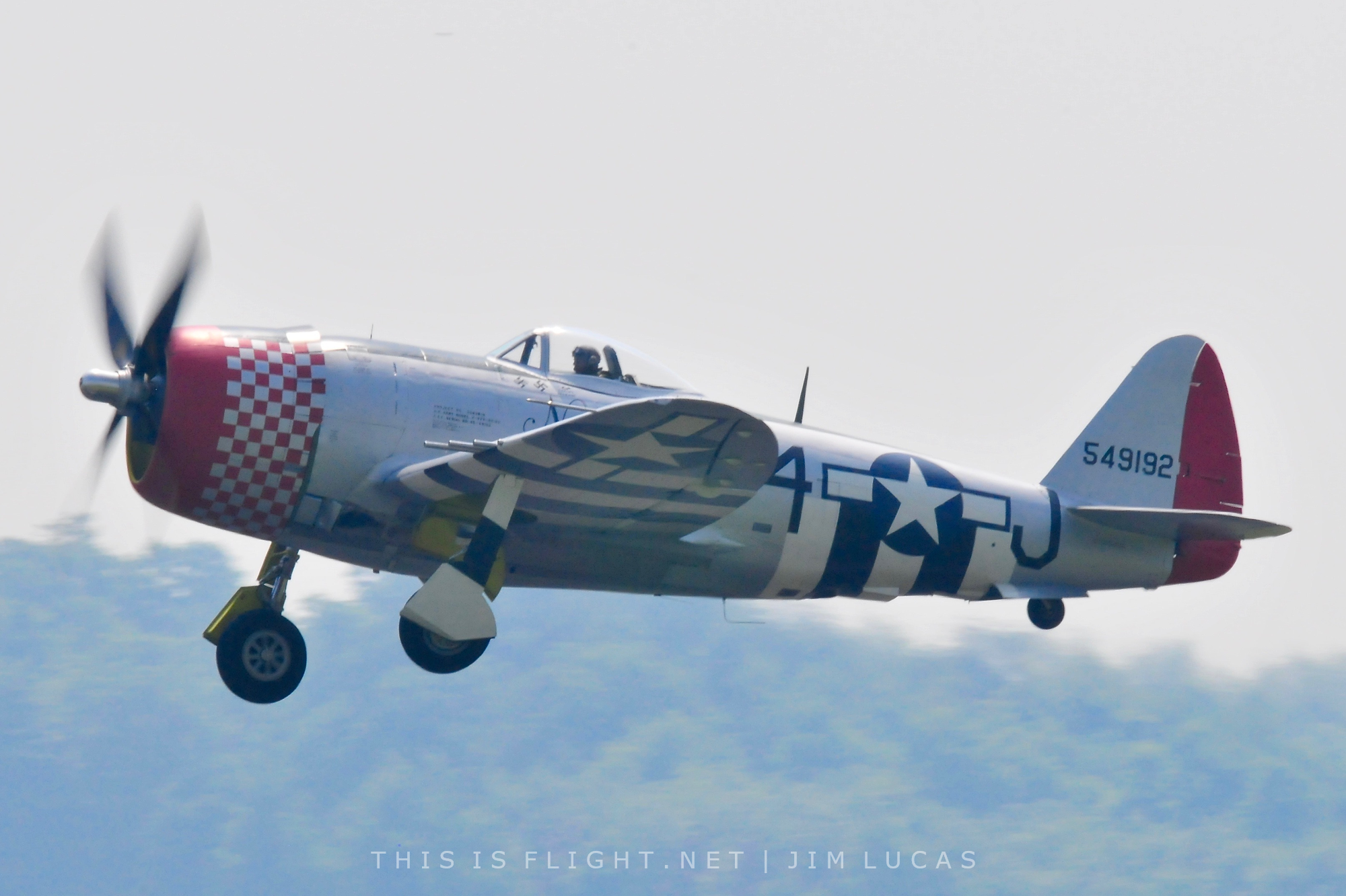 The nine Tiger Moths of the Tiger 9 Formation Team were up for some formation flying, tail chases and opposition passes. Despite the high winds playing havoc, they pulled off a slow but enjoyable display. Built in 1931, the Tiger Moth is still going strong, but to see nine in the same airspace is a rare specticle indeed.

The Boeing Stearman biplanes of the AeroSuperBatics Wingwalkers were up next with their unique barnstorming act. These old machines, like the Tiger Moth, have stood the test of time. Filling the airfield with smoke, they presented a great show. 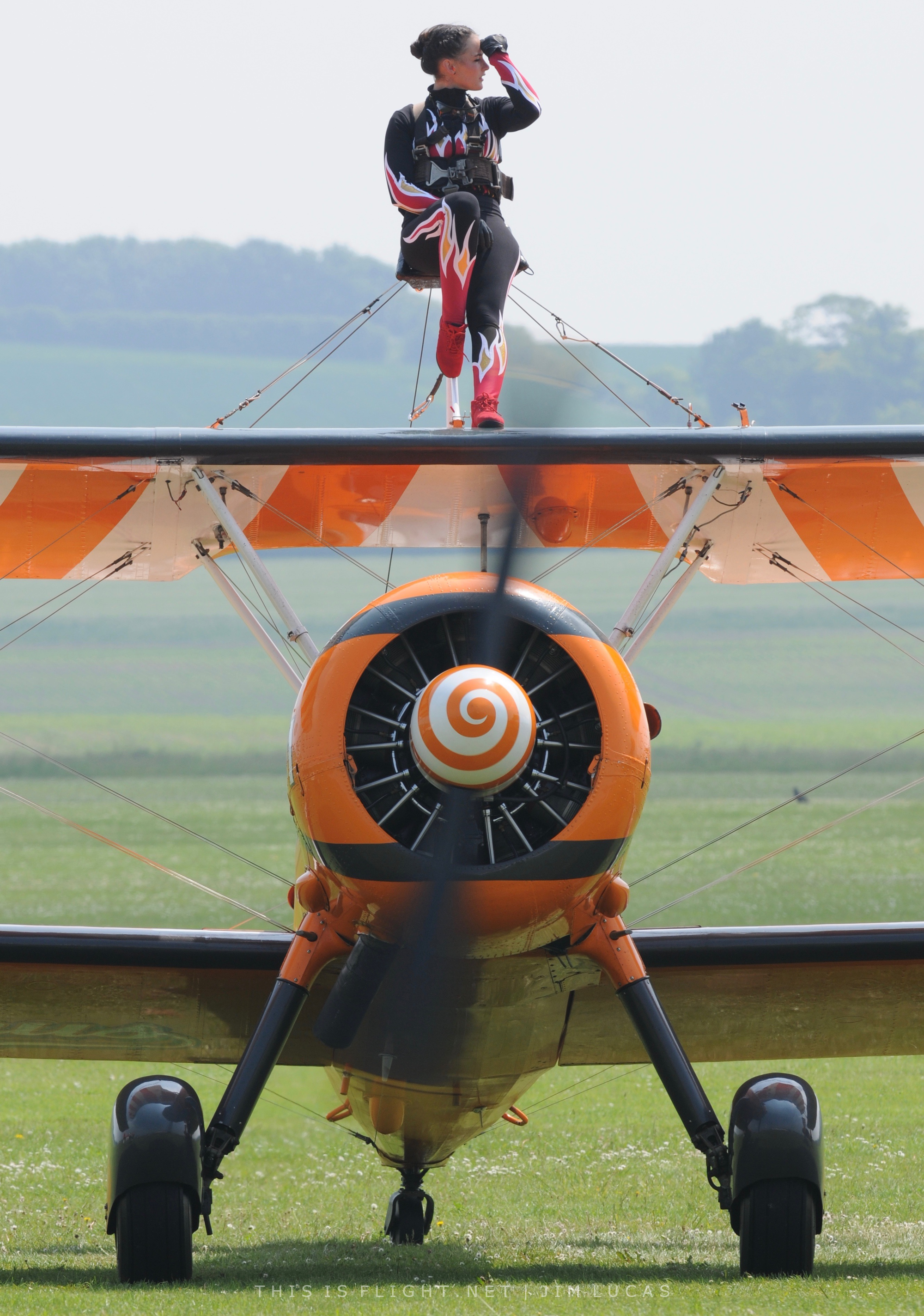 A complete change of pace – and a UK debut – came from the Armée de l’Air Equipe de Voltige (EVAA).  Displaying the Extra 330SC, the EVAA is the competition aerobatic team of the French Air Force. The displays over the weekend were provided by Lt. Florent Oddon and Cpt. Alexandre Orlowski. Action packed throughout, they captivated the crowd’s attention from start to finish.

Here followed the RAF’s own small contribution to the show: 27 Sqn. from RAF Odiham and the Chinook HC.4 solo display.  The display team made a low level entry to the show, pitching up into the first manoevure to begin its display. The mighty machine was flown with grace around the skies to the soundtrack of the distinctive blade slap.

From the sole modern day RAF aircraft at the show, we then wound the clock back to the Second World War-era with a display from the last B-17 left flying in Europe. B-17G Flying Fortress “Sally B” flies in dedication to those who lost their lives with the United States Army Air Force in the defence of Europe. This is an aircraft that one never wants to miss.

The Trig Aerobatic Team increased the pace once again with their pair of Pitts S-1D Specials. These little aircraft certainly pack a punch in the skies. The pilots, Richard Grace and Dave Puleston, performed a series of breathtaking passes and formation aerobatic manoeuvres with plenty of smoke to added drama – again, a great display.

Next up, another formation display of de Havilland aircraft. This time, it with a four ship of DHC-1 Chipmunks. Designed in Canada and first flown in 1946, this aircraft gave wings to countless new pilots and Air Cadets. The display at Duxford was provided by the brand new Fourchips Display Team, with this show being their debut display. 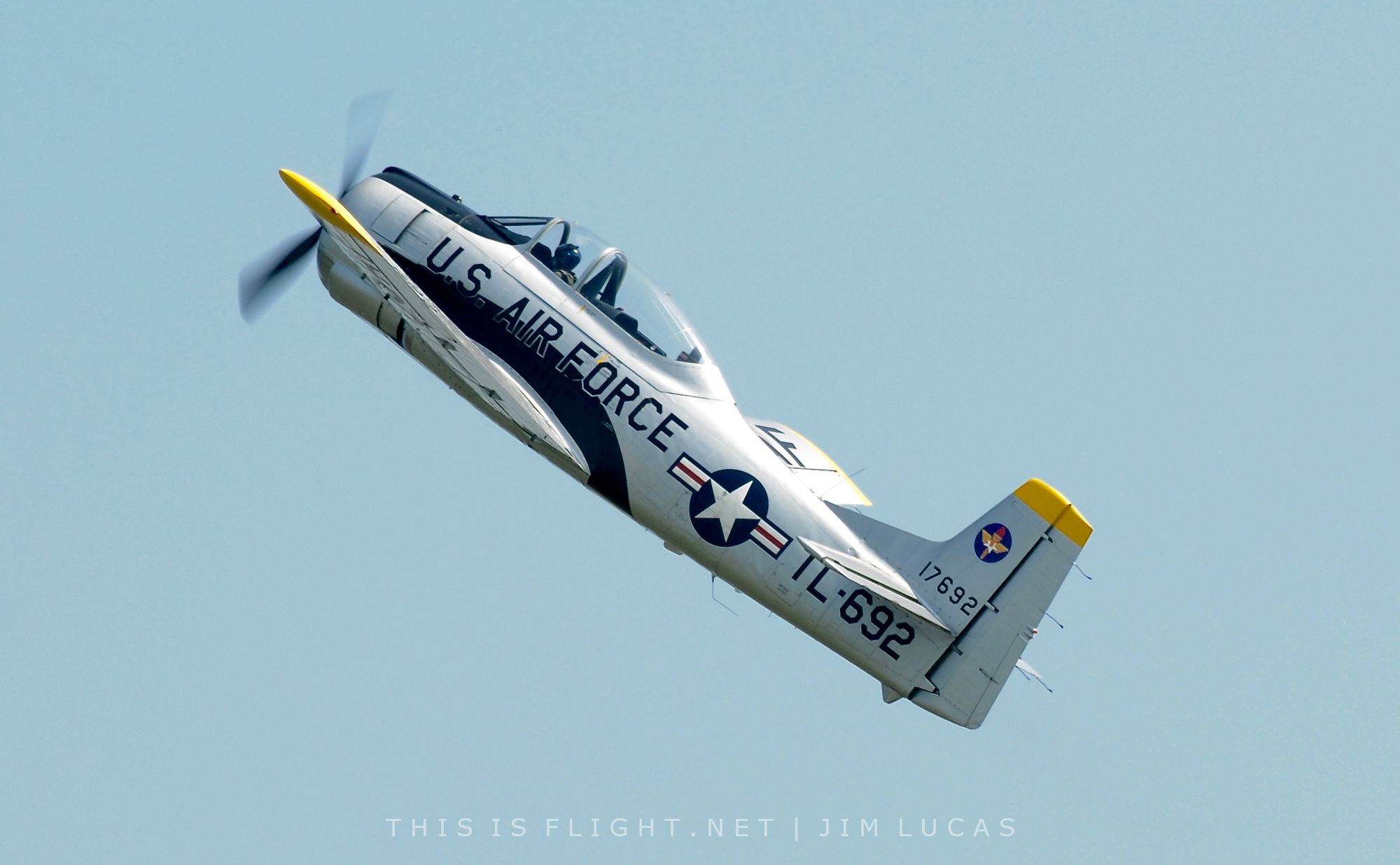 Two much more powerful training aircraft from a similar era then took centre stage. First up was a solo display by the North American T-28 Trojan. It was followed by no fewer than seven North American T-6 Harvards commemorating the 80th anniversary of the type. As you can imagine the noise from the Pratt and Whitney Wasp Radial whip the air as they flew by was nothing short of fantastic. The display consisted primarily of formation flying and tail chasing, and proved to be highly entertaining. 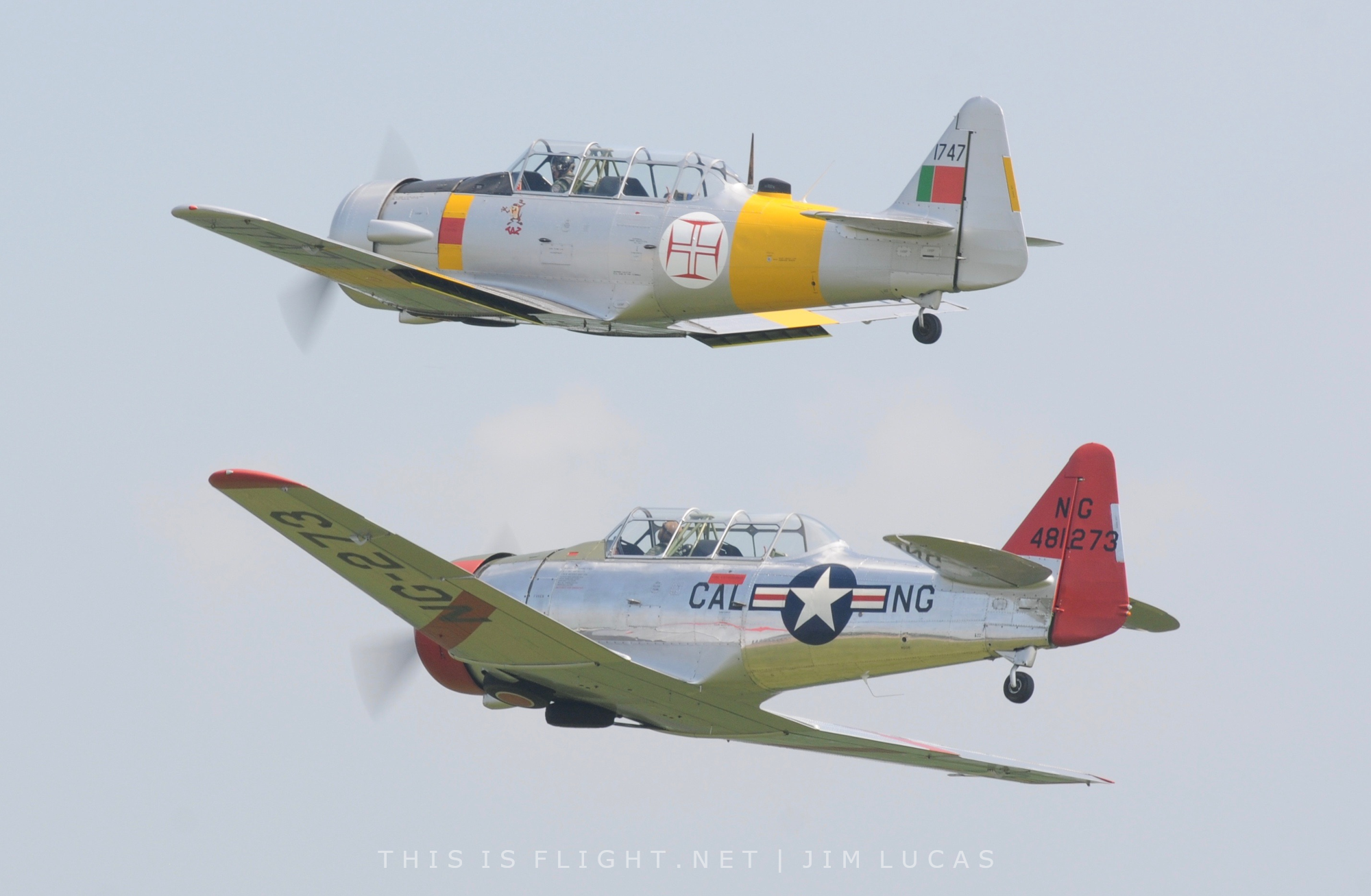 Then came something completely different: an unexpectedly enjoyable display by the Farner Werke F+W Schlepp C-3605. Initially used by the Swiss Air Force as a ground attack aircraft, this unique plane entered service as the EKW C-36 in 1942. After being modified into the C-3605 for the target tug role in the 1970s, the type remained in service until 1987. The display was possibly the best of the day, with graceful rolls and turns throughout. The ability to keep the topside view along the crowd line was welcomed, this being something we seem to see less and less of at Duxford. Seeing the C-3605 in the UK was a rare treat and such imagination on behalf of the organisers must be applauded. 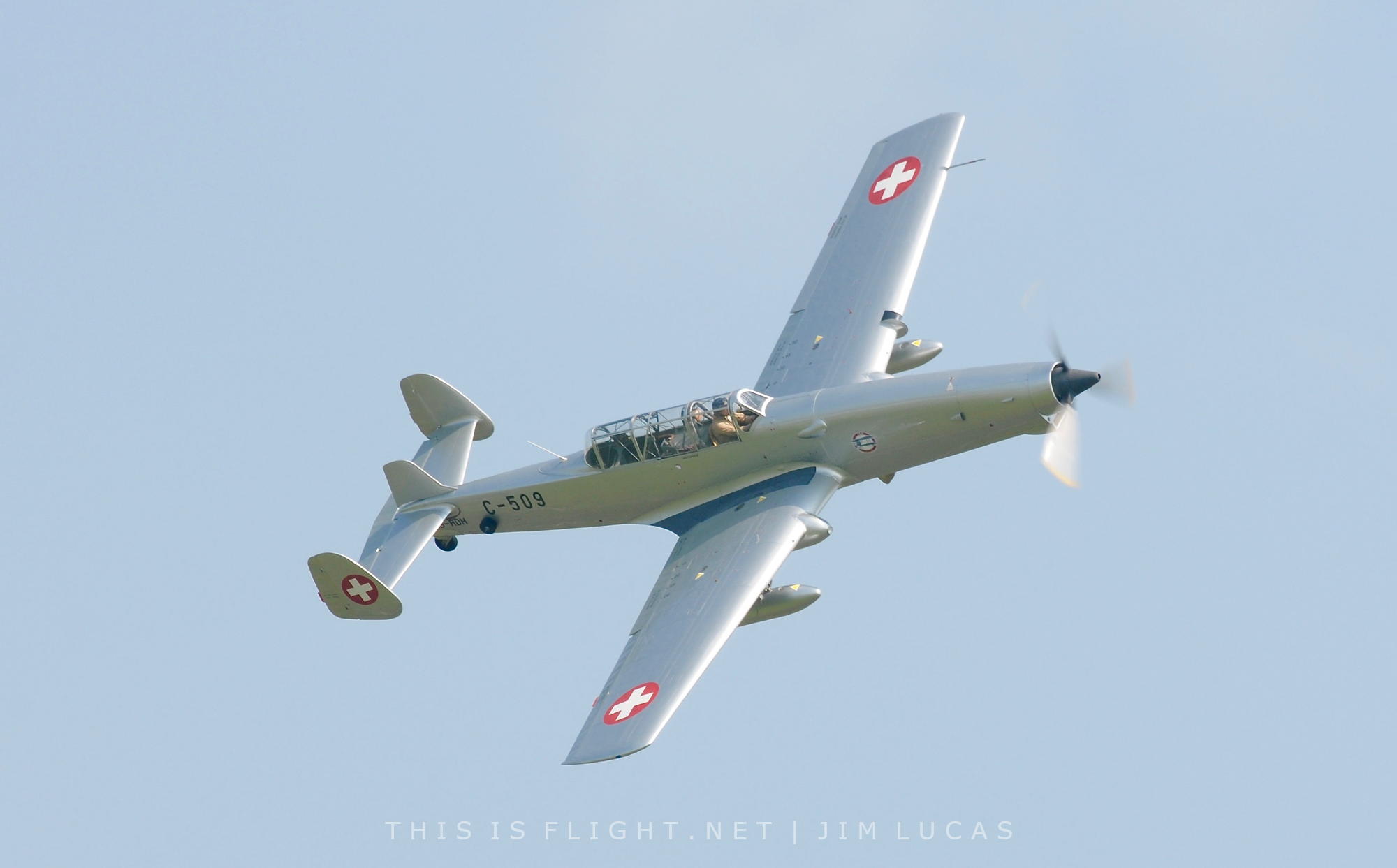 Next up were the Global Stars, performing their first UK display since returning from a trip to China earlier in the year. Comprising entirely of UK competition aerobatics pilots, the display at Duxford utilised an Extra 300SC, Extra 300, Extra 260 and Cap-232. It is an exciting routine that certainly keeps the crowd on edge.

The next slot was flown by Consolidated PBY-5A Catalina “Miss Pick Up”. Billed as a unique pairs display with the Grumman FM-2 Wildcat, the latter was unfortunately unable to perform. Nevertheless, the captivating looks of the Catalina made up for the shortfall. It is always a pleasure to watch this aircraft with its graceful and impressively low display. 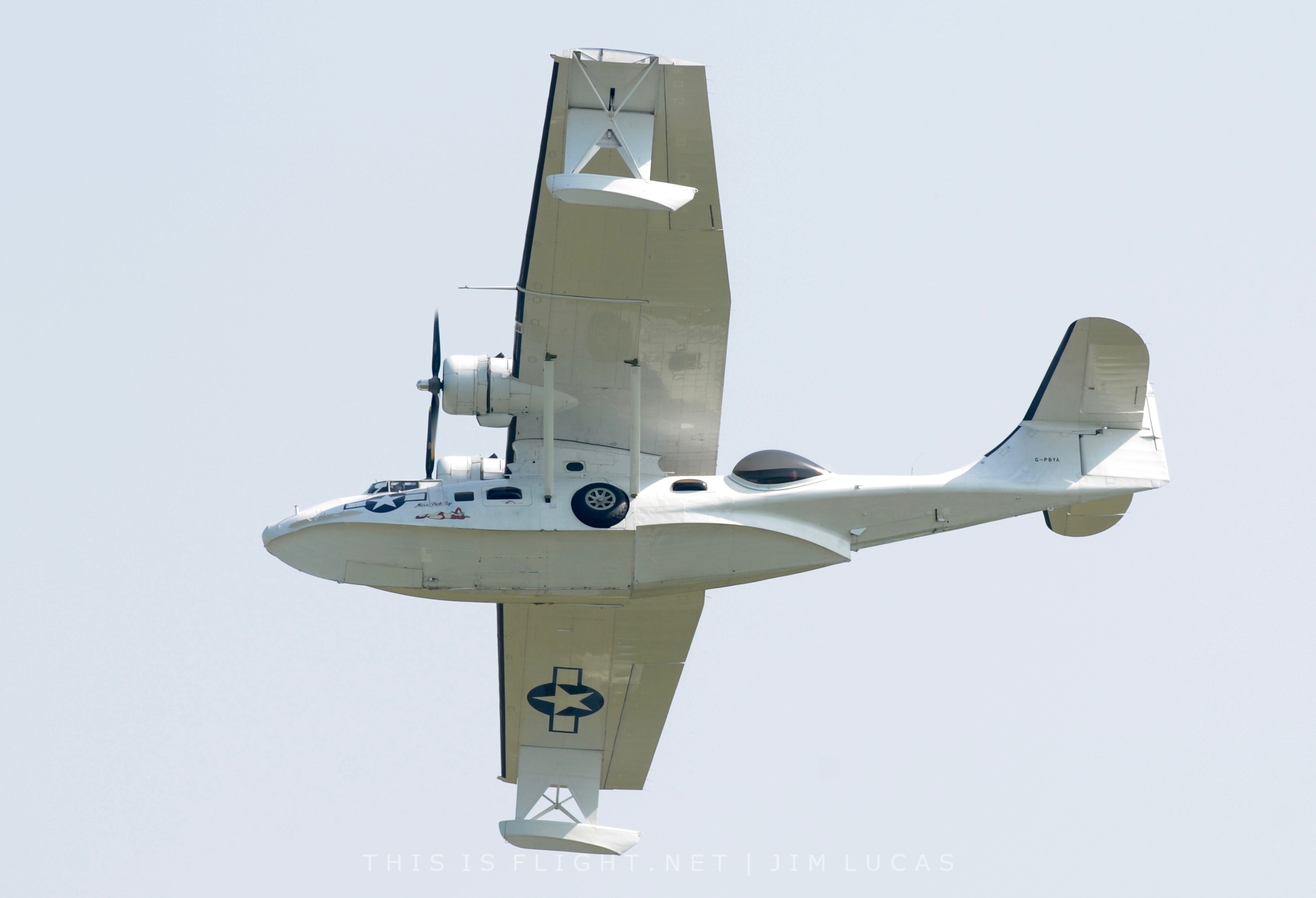 Three heavy WWII fighters came next: the Goodyear FG-1D Corsair, Hawker Sea Fury T.20 and Hawker Fury FB.II. The sound of the Pratt & Whitney R-2800 Radial engine of the Corsair is fantastic, even at high speed it sounds as if it is just ticking over. It performed a great display using the whole of the airspace above Duxford. The same could not be said for the pair of Furys, which, I have to say, was a little disappointing. Their display was very distant and lacked the edge you would expect from such an aircraft.

Aces High’s Douglas C-47A Skytrain was next in the air. This particular aircraft has a great history – built in 1942 it was used initially by the Royal Canadian Air Force and saw service in the Arnhem Landings of 1944. Following the war it took part in the Berlin Airlift. After being saved from the scrap heap, it has gone on to enjoy an illustrious career in TV and film. 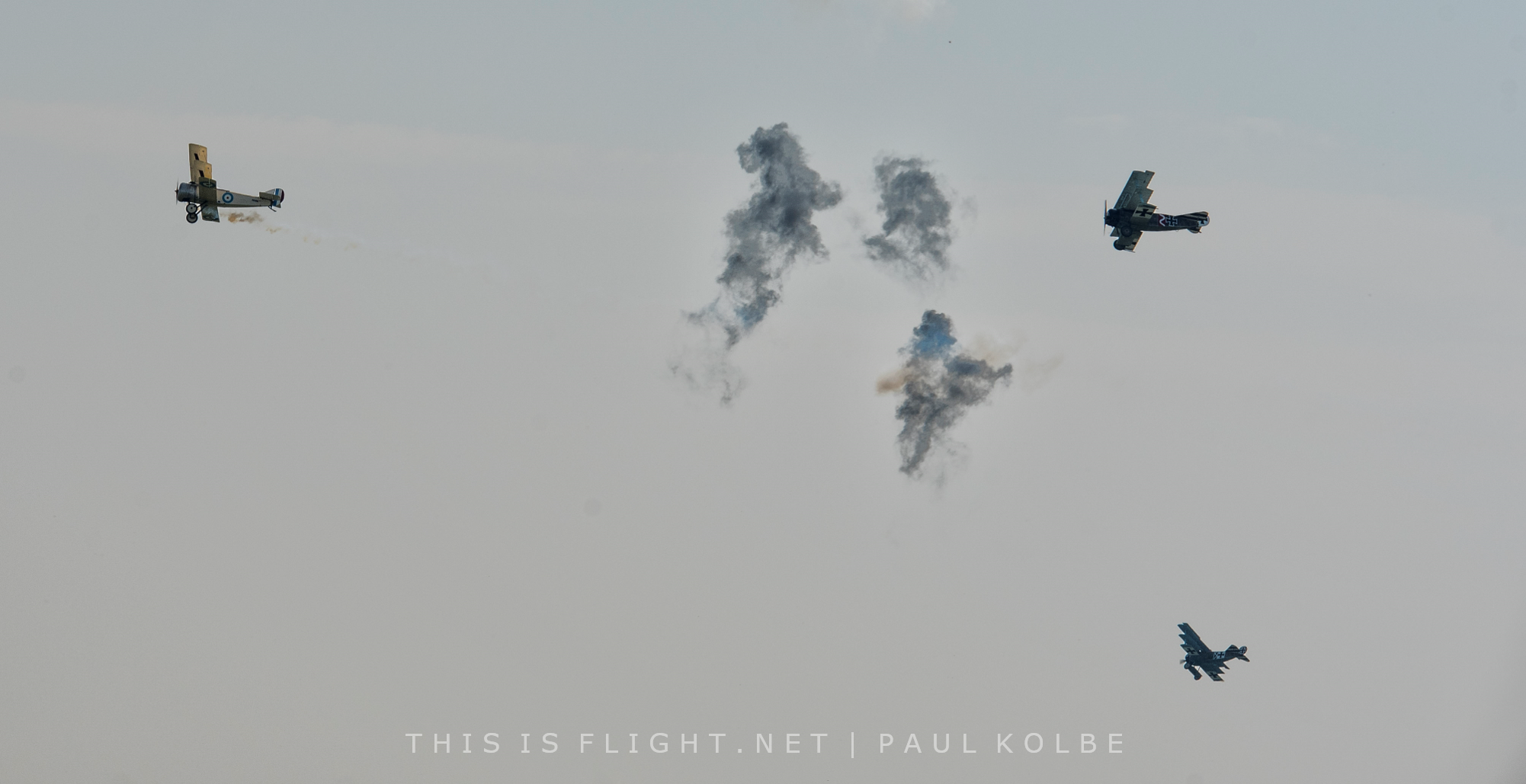 Next to perform were the Bremont Great War Display Team. Flash, bang, wallop – yes that what we got from this team in their WWI-era aircraft. I have commented on this team many times before. They never get it wrong.

Next to perform was Navy Wings’ Fairey Swordfish. First flown in 1934, the Swordfish was out of date by the time the war broke out, but with true grit the UK continued to use them in the conflict. Its stirling service saw it used extensively in the sinking of enemy ships. It is another aircraft that is very enjoyable to watch. Navy Wings also displayed their Hawker Sea Fury T.20. The full-on, thunderous display was a pleasure to observe. 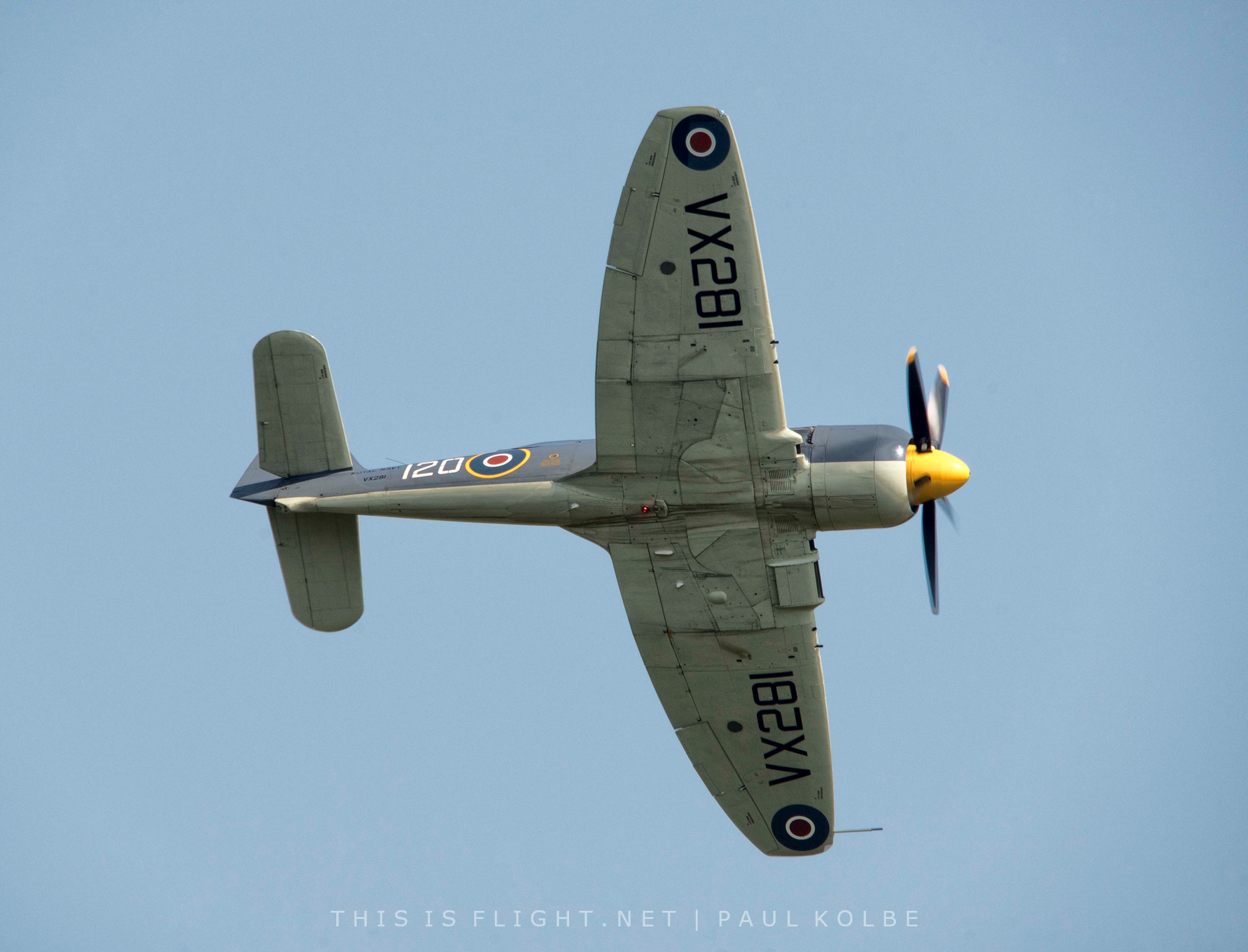 Now for the noise, courtesy of the second Armée de l’Air display of the day: the Dassault Rafale C. Screaming in from the left, the Rafale quickly took command of the skies above Duxford. From the crowd’s reaction it was one that was appreciated – a thrilling, breathtaking display from Cpt. Sebastian Nativel which showed the aircraft off to its full potential. 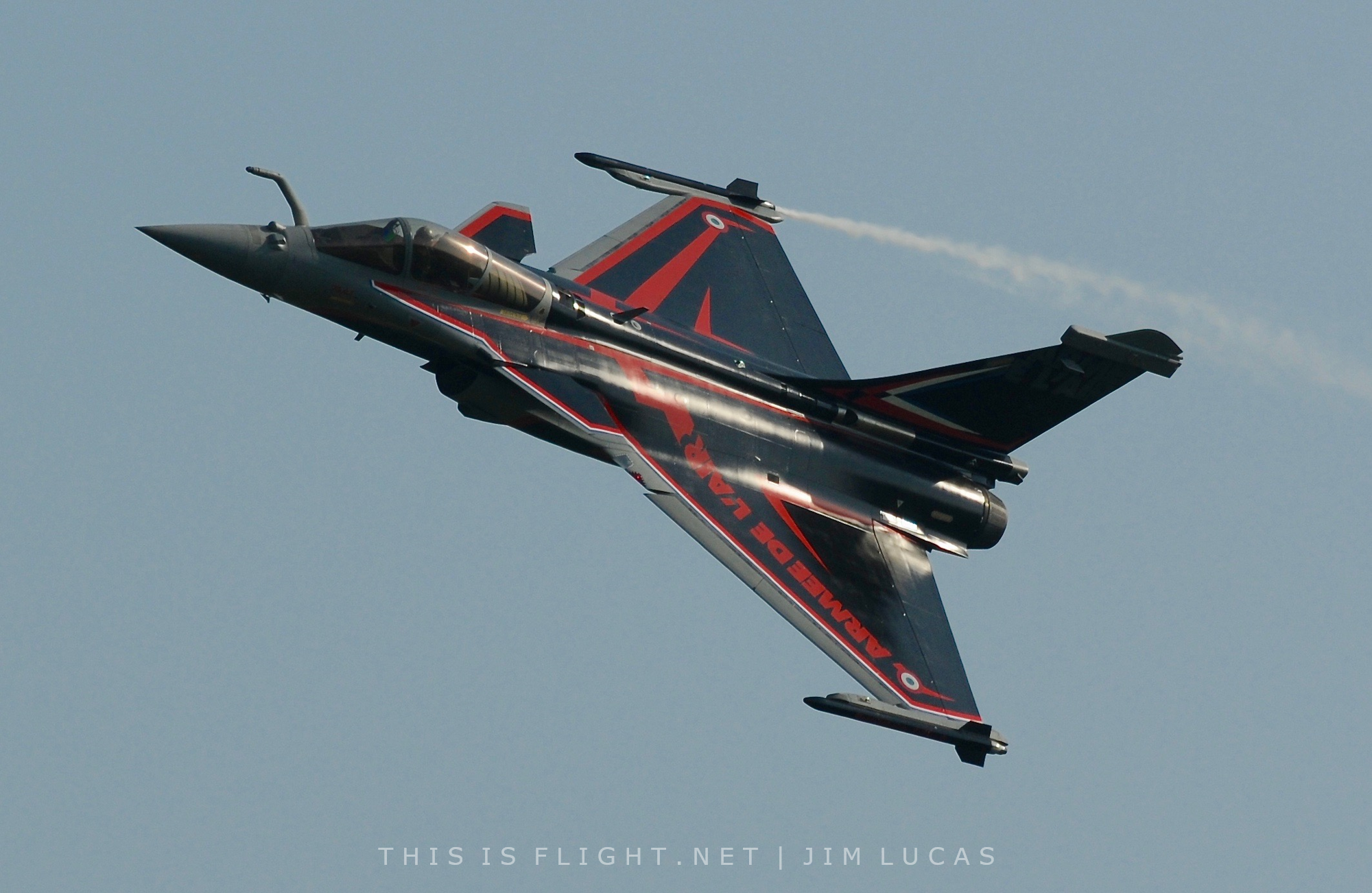 Ending the show was the Imperial War Museum’s own Supermarine Spitfire Mk.Ia, a veteran of the exacuation of Dunkirk. It was during one of these missions that the aircraft was shot down, making a forced landing on the beach at Sangatte. In 1986 it was discovered, returned to the UK and restored. 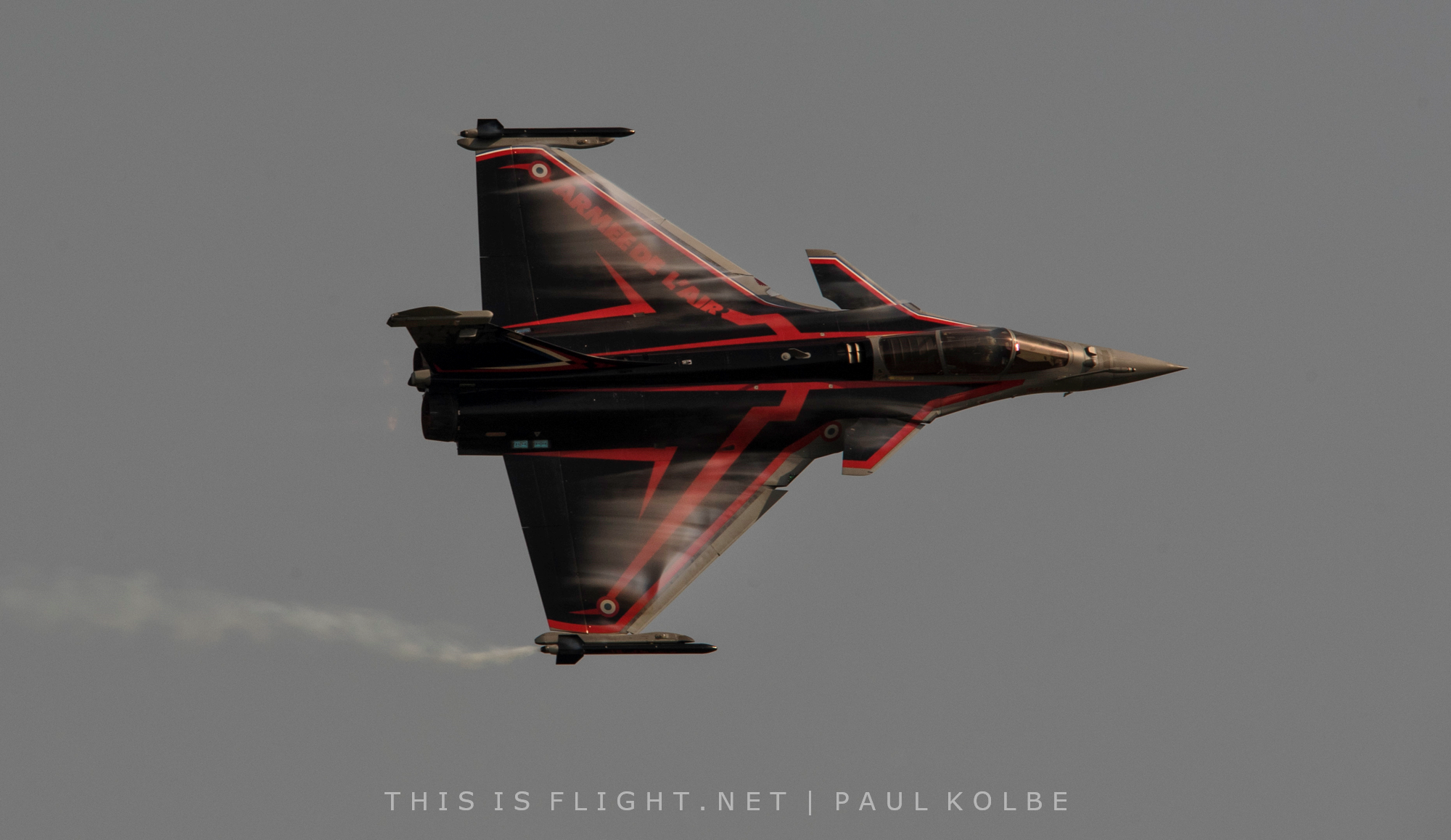 So what of the show? For me personally, I felt the show was lacking in what Duxford usually provides. There were many missed opportunities for unique formations (the three Furys spring to mind, as does the B-17 and P-47). Many of the displays that did take place were simply too far away from the crowd. All in all, it was certainly not one of the better shows I have experienced at Duxford.

Many also spoke of the lack of RAF participation, which was doubtless a big disappointment for many in this anniversary year. The organisers were keen to point out to us that their September show is in partnership with RAF100, and much greater RAF participation is expected.