Great Bend Army Airfield was activated in 1943, and played an important role in preparing B-29 crews for missions against Japan during World War II. The proximity to the plant in Wichita and the relatively flat terrain made western Kansas an ideal place for training bases of this type. Deactivated in 1946, the site still serves as the municipal airport for Great Bend, Kansas. To commemorate their 75th anniversary, the airport held the Great Bend AirFest on September 28th-30th 2018.

What would otherwise have been a rather minor event became historically significant with the announcement that both currently flying B-29 Superfortresses would be there and would fly together. “Fifi” and “Doc” have previously only appeared together twice since the latter was restored to flying condition last year. Several other quality aerial performers were also on hand, but the Superfortresses were unquestionably what almost everyone came to see. 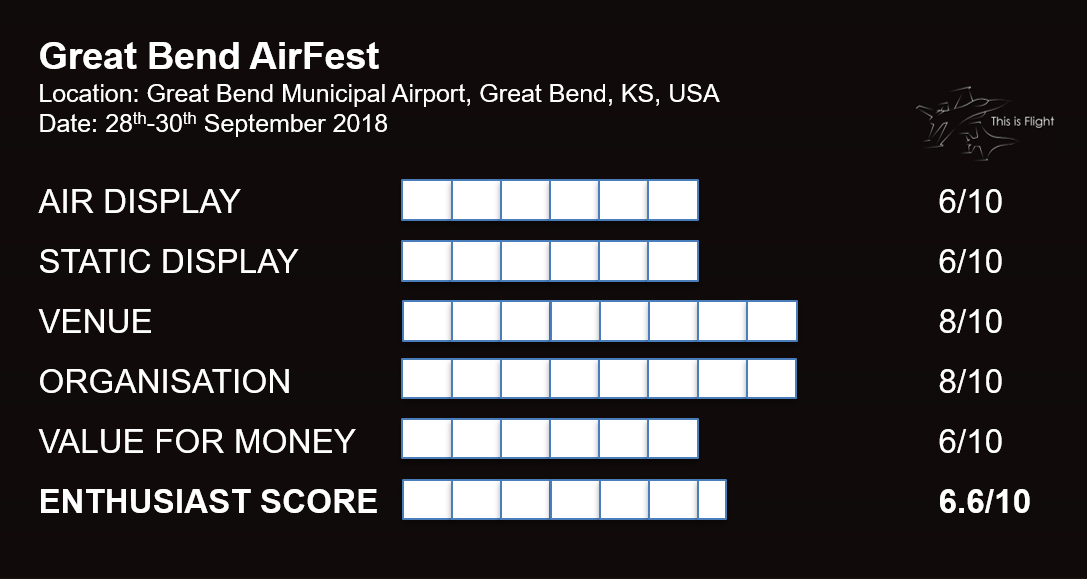 Unfortunately, however, the temperamental Kansas weather intervened and seriously impacted the flying all weekend. On Friday, cold, near gale force winds out of the north and low temperatures kept the crowd to a minimum for the open practice day. With a low ceiling, the B-29s could not fly, but the other acts were able to brave the elements and entertain the small crowd. Many of the aircraft at the show were also WWII-era, and most (with the notable exception of a beautiful A-26 Invader) participated in the flying displays.

Saturday morning picked up where Friday afternoon had left off, cold and windy with a very low ceiling and a constant drizzle. The schedule had originally called for two separate rounds of flying, one at 10:00 and one at 15:30, but the continuing light rain and low ceiling caused a cancellation of the first show and put the second in jeopardy. After the weather had begun to clear, it was announced at the B-29s would once again be unable to fly due to the expected low ceiling. As clearer weather was forecast and blue skies could be seen approaching from the southwest, this announcement caused considerable consternation among the crowd. The day was far from a loss, however as the other performers were able to put on great demonstrations even though the clouds soon returned. 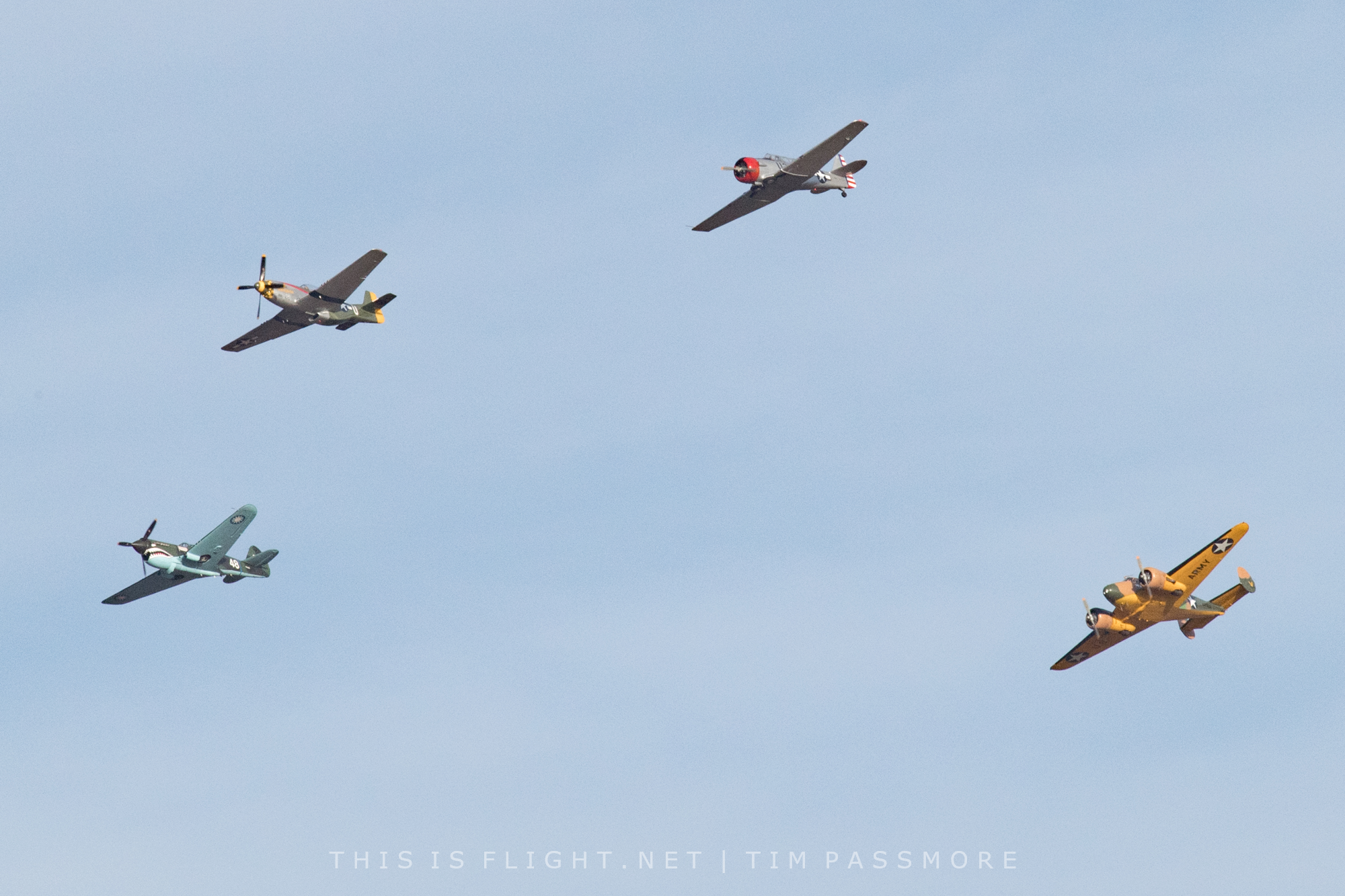 Larry Lumpkin in the P-51D Mustang “Gunfighter” and Bob Watts in a P-40 Warhawk, restored to a historic Flying Tigers paint scheme, showed off the speed and agility of these classic US fighters. Steve Afeman flew his beautifully-restored SNJ-5, the Navy version of the T-6 Texan, there as well and showed why this classic was one of the most popular advanced trainers of its day. Also flying were a T-6 Texan and a C-45 Expeditor, providing passenger rides and performing a flypast with the Mustang and the Warhawk. The Falcon Flight team was also able to perform a full five-ship display, doing passes in various formations to demonstrate close formation flying. 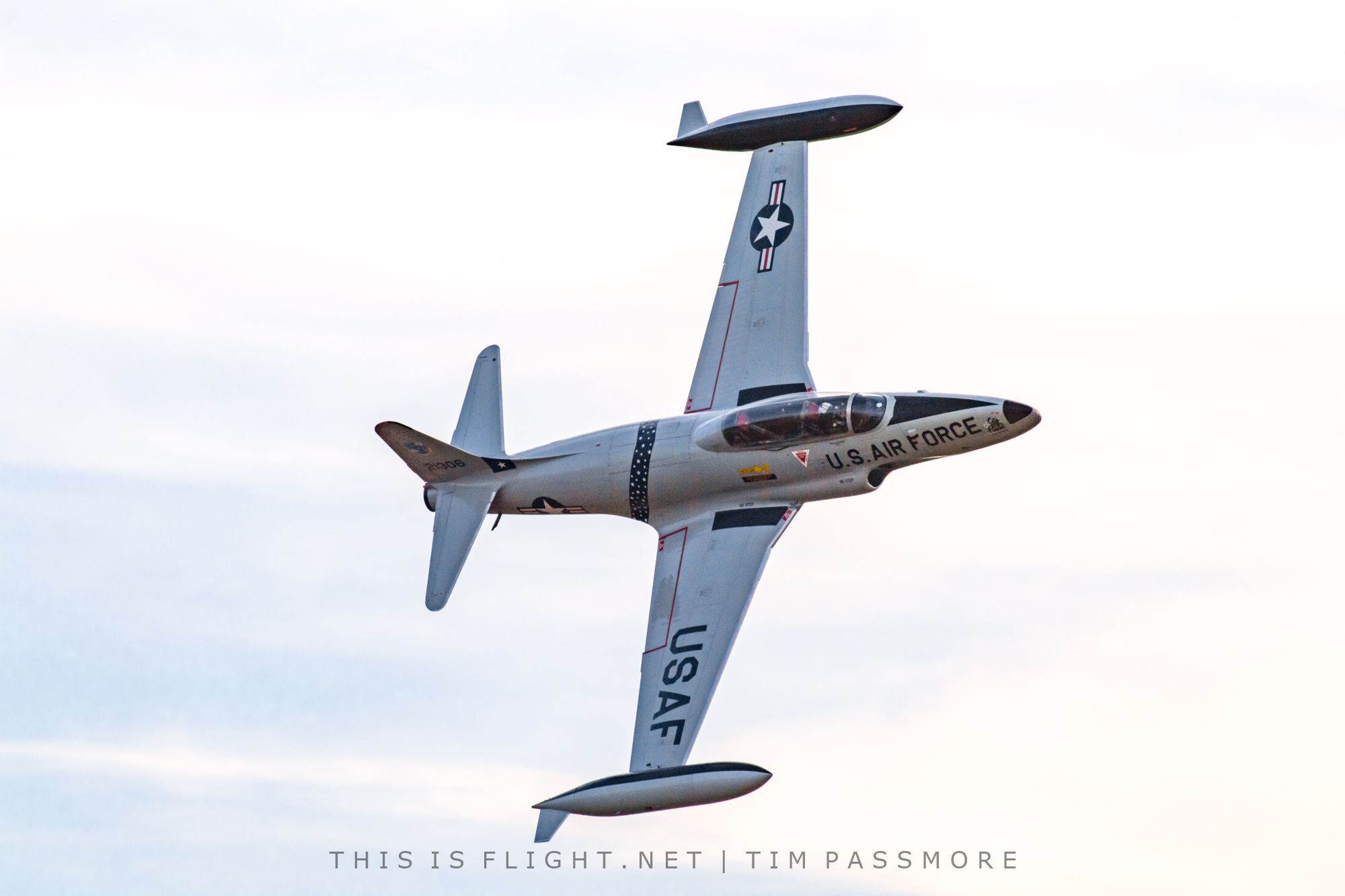 The action ramped up when Shaun “Buzz” Roessner took to the skies in his beautiful T-33 Shooting Star “Ace Maker”. Roessner, a Navy veteran, looked at times like he was still flying an F/A-18 instead of a 70-year-old classic, even pulling vapor in some of the maneuvers. Joe Shetterly, part of a well-known airshow family, flew his highly polished silver Vans RV-8 like it was a Pitts Special, most maneuvers short of the most violent snap rolls at times flying just feet off the ground. Last up was Adam “Shakenbake” Baker in his nimble Extra 330. Baker always provides an exciting show performing the full gamut of airshow maneuvers from dizzyingly fast aileron rolls to the unbelievable-looking Lomcevak. 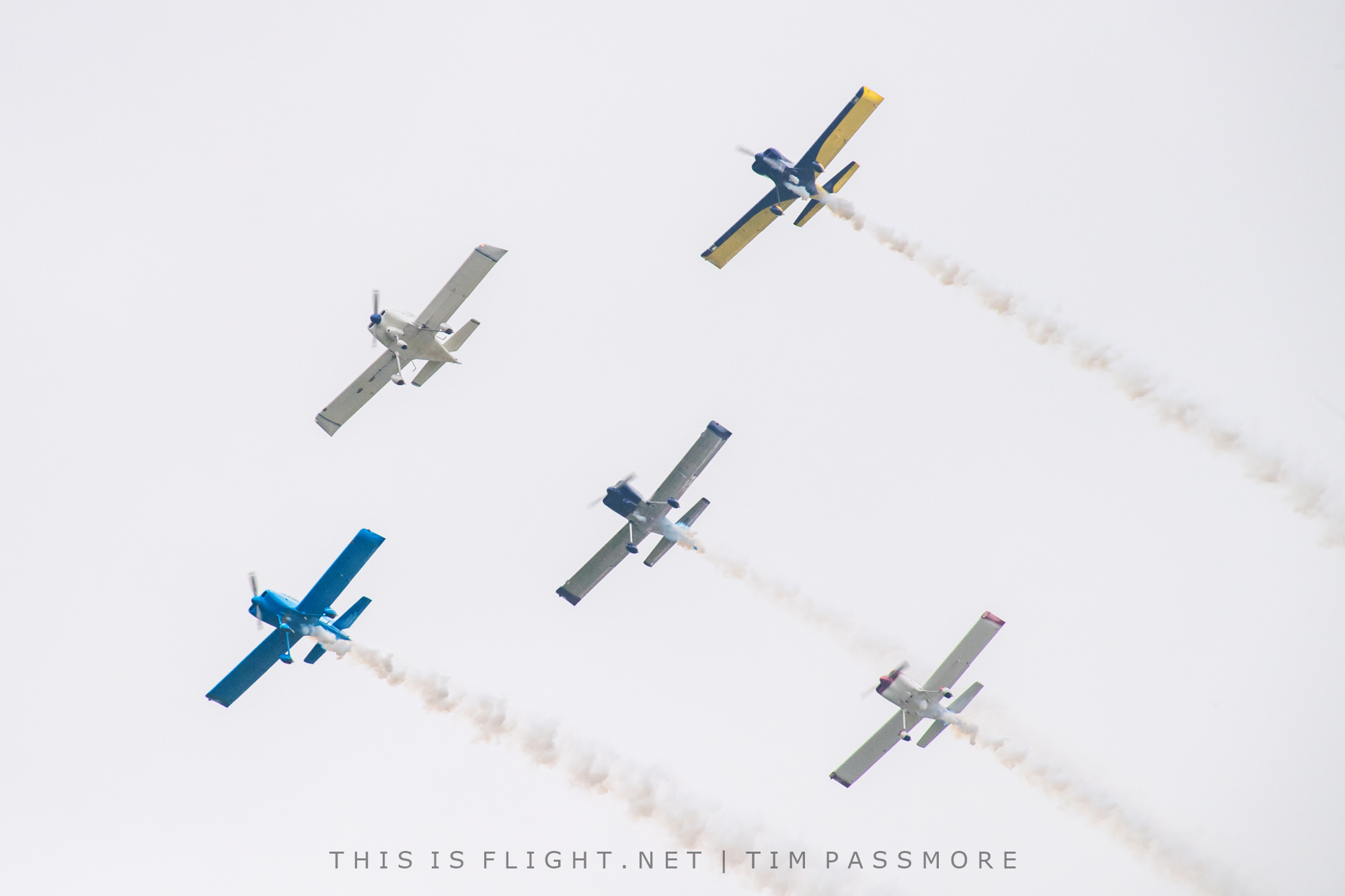 On Sunday, the weather finally looked promising, and a large crowd gathered in hopes of finally getting to see the B-29s fly together. There was still a strong southwind, but cloud cover was high with clearing skies forecast. When first “Fifi” and then “Doc” were pushed out, the crowd gathered several deep along the barrier to watch. After the usual smoky start up of their powerful but often troublesome Wright Cyclone engines, “Fifi” began to taxi with all eyes glued upon her. Because the crowd area took up much of the taxiway, the B-29s were forced to taxi to the south end of the runway and back taxi all the way to the north end before turning around to prepare for take off. 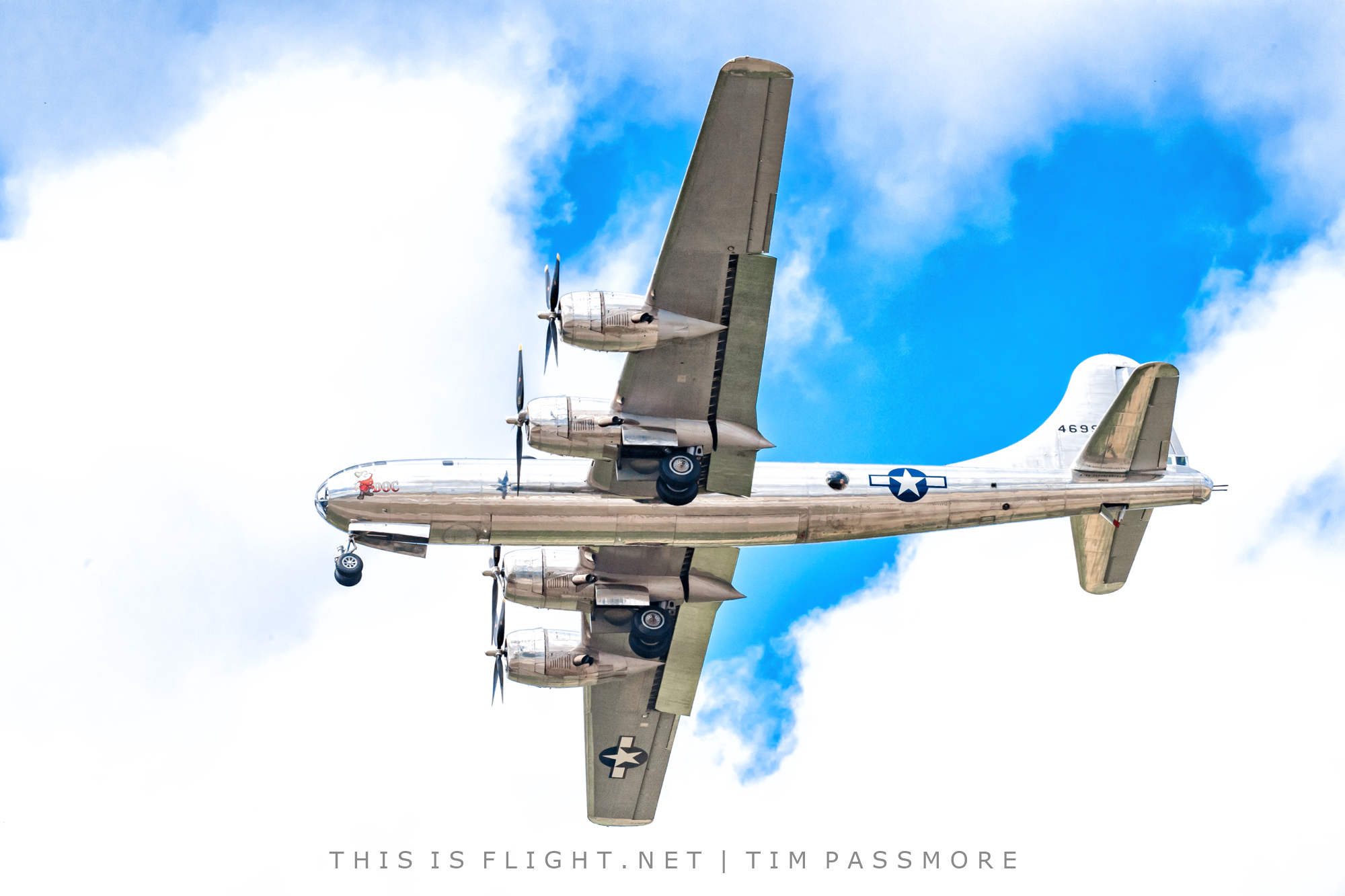 Watching “Fifi” lumber down the runway and slowly lift off, it was easy to imagine this scene multiplied hundreds of times on the airfields on Saipan, Tinian, and Guam. Once she was airborne, “Doc” repeated the process and followed her into the sky. They were joined by the P-51 and the P-40 for this historic event, but the winds were so violent aloft that they were unable to fly in close formation. Both bombers were able to make several passes, together and individually with their fighter escorts, a truly breathtaking spectacle to behold. 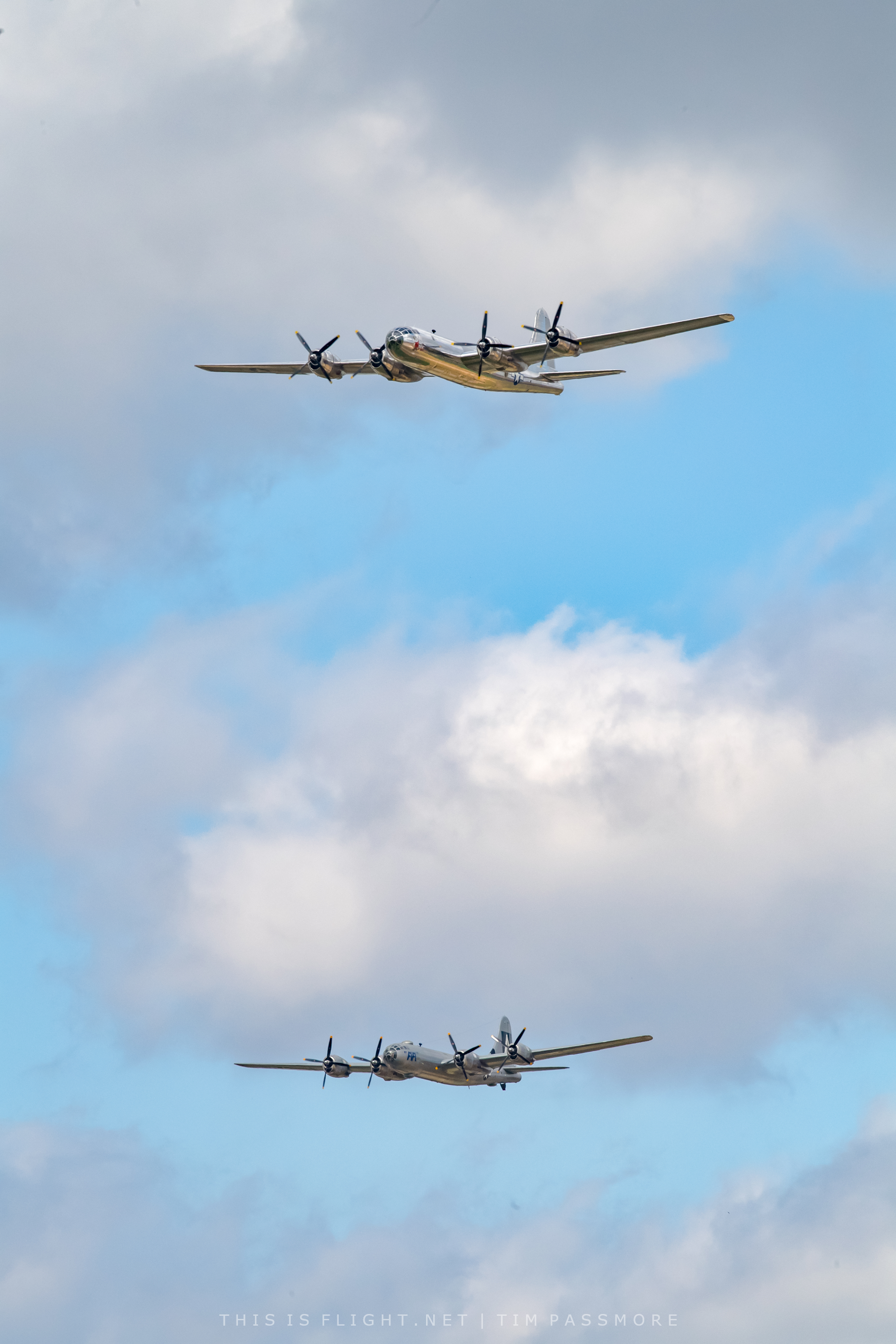 As they were on their downwind leg preparing to land, the wind made an astonishingly abrupt 180° shift and increased in intensity. This required them to pass on that landing and prepare to land from the south. “Fifi” attempted to land first, coming in at a very steep angle. Just feet off the ground, this attempt was aborted and a go-around initiated. The crew radioed that 200 feet above the ground the wind had not yet shifted and that they had encountered extreme windshear. “Doc” then made an approach, and although buffeted severely by the winds, was able to land safely. “Fifi” was soon down as well, but once again the buffeting was obvious as they approached touchdown. 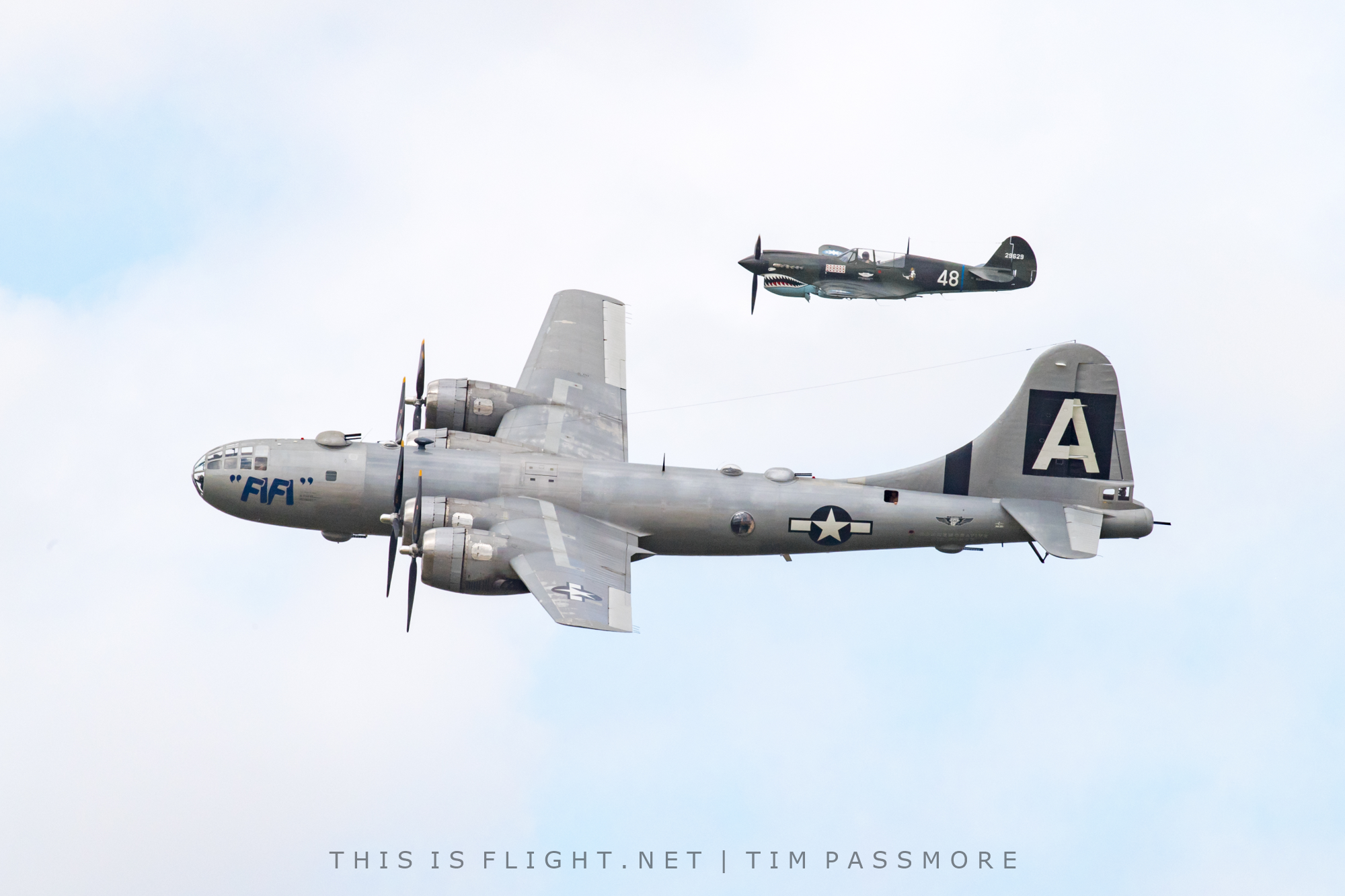 The rest of the performers were able to fly their shows with no apparent trouble as the smaller planes were not affected by the capricious winds the way the Superfortresses had been. It may seem unfair, but following the jaw-dropping experience of watching two B-29s fly, the rest of the flying could almost be called an anti-climax… but not quite. 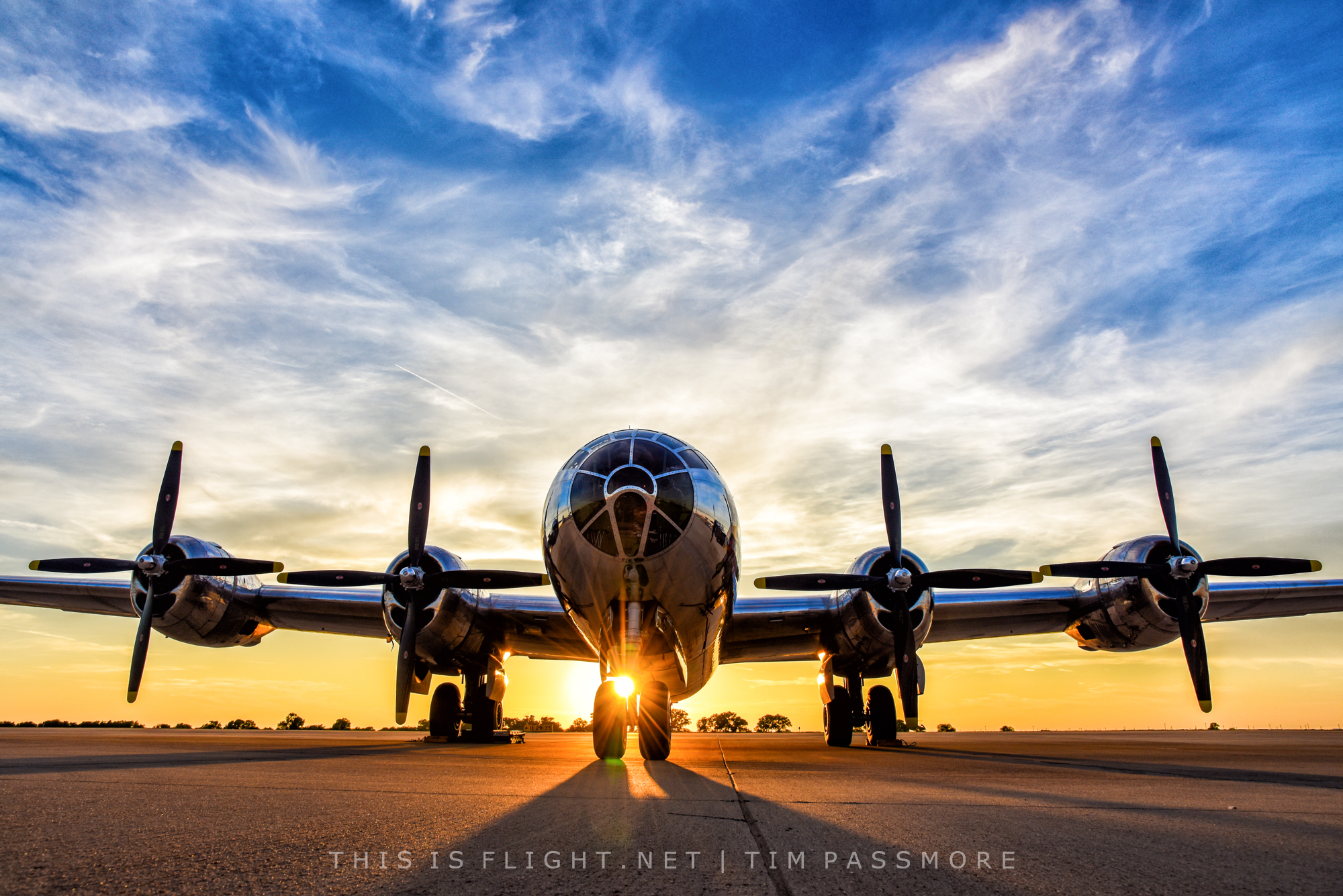 Following Adam Baker’s closing performance, a ceremony honoring all veterans was held. It was a moving tribute to our veterans and featured a flyover by the P-51, P-40, T-6, and C-45 in a diamond formation. As incredible as it was to see these two fly together one time, it’s easy to imagine what it would have been like to see multiple flights in good weather.

Tim Passmore is a Vietnam-era veteran of the US Air Force and a lifelong aviation enthusiast. He also covers auto racing and musical events. The Author wishes to thank Martin Miller for his hospitality and help prior to and during the weekend. Lastly, he wishes to make clear that the rather low score for the flying display does not reflect on their flying over the weekend. Instead, it reflects the limited flying the crowd was able to see over the course of the weekend and the impact the rotten weather had all three days.