Tinker AFB, Oklahoma hosted the 2017 ‘Star Spangled Salute’ on the 20th and 21st of May. The event was to commemorate the 75th anniversary of the base’s opening, and the US Air Force’s 70th anniversary as an independent branch of the armed services. The USAF Thunderbirds headlined the event, with several exciting jet performances by a USN F/A-18, USAF F-35A, and post-WWII vintage de Havilland Vampire. The prop jobs were well represented as well, with several classic “warbirds” present. Visitors were also treated to spectacular flying by some of the best aerobatic pilots in the country, as well as jumps by the USAF Academy parachute team. This is Flight’s weekend actually kicked off on the Thursday before, with a flight aboard an Air Force KC-135 to meet and refuel the Thunderbirds, but that is another story in itself – so watch out for that report, and photos from the flight. 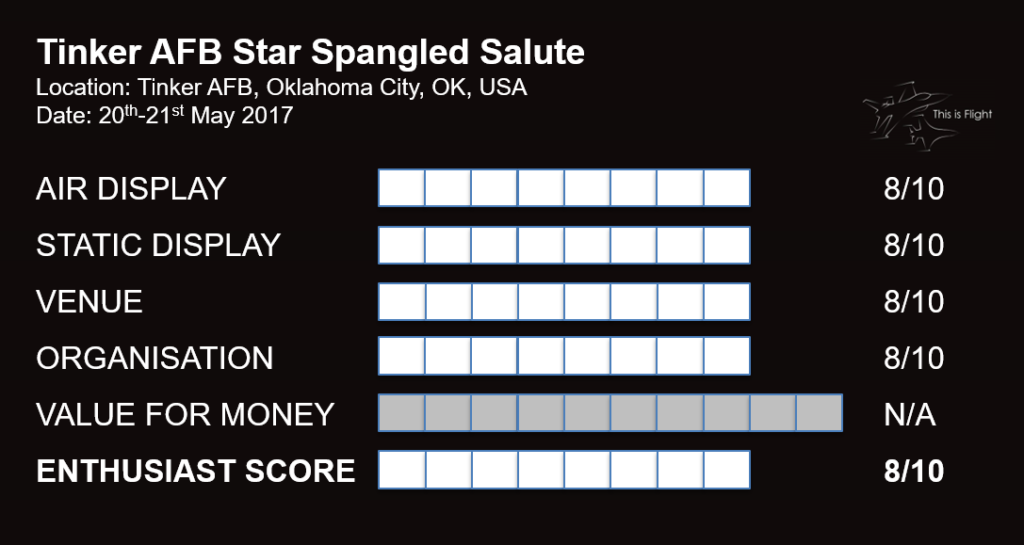 Static displays ranged from Air Force heavies such as the B-52 Stratofortress and C-17 Globemaster III, down to a few ultralight aircraft and even a life size Army ‘MOAB’ model. One of the few aircraft that spectators were allowed to view as a static that also flew, was a Navy E-6 Mercury which wowed the crowd with a low pass down the length of the runway at a height of about 2 meters. This pass is called a ‘landing attitude demonstration’, and is designed to give new pilots a good visual of what the proper landing attitude is for the plane. Other planes on display included a PT-19 and PT-26, B-1, T-38, T-6, H/MC-130J, and many more. 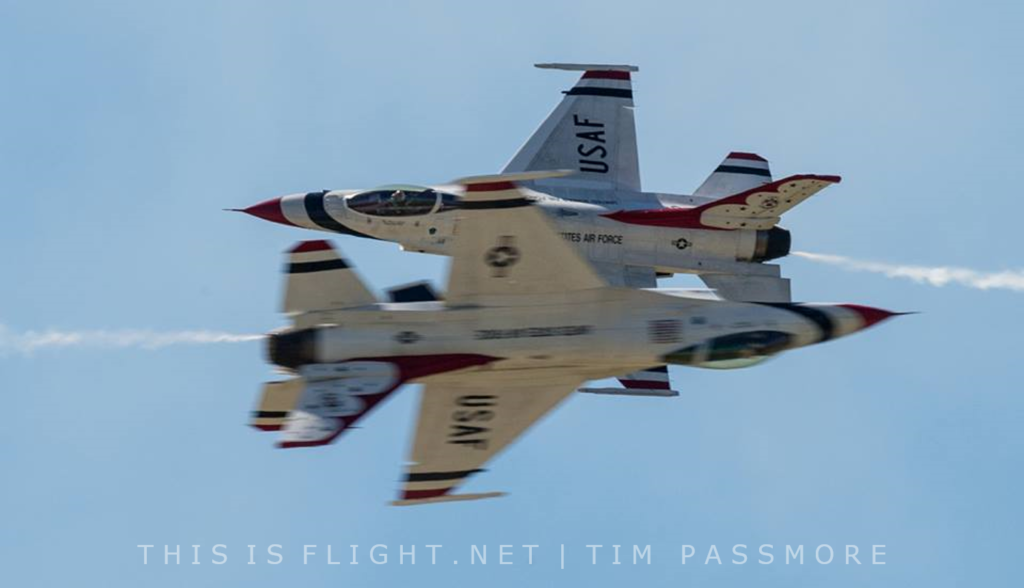 The flying kicked off each day with a thrilling performance by Oklahoma aerobatic pilot Adam Baker in his diminutive Extra 330. Adam puts on a very impressive demonstration of what this plane can do: incredibly fast snap rolls, precise hesitation roles, hammerhead turns, and more were all flown very crisply. Watching him “hang it on the prop” with that small engine is incredible. He told me later that, “I love flying and enjoy sharing my passion. Hopefully we can get some more kids interested in aviation again!”. 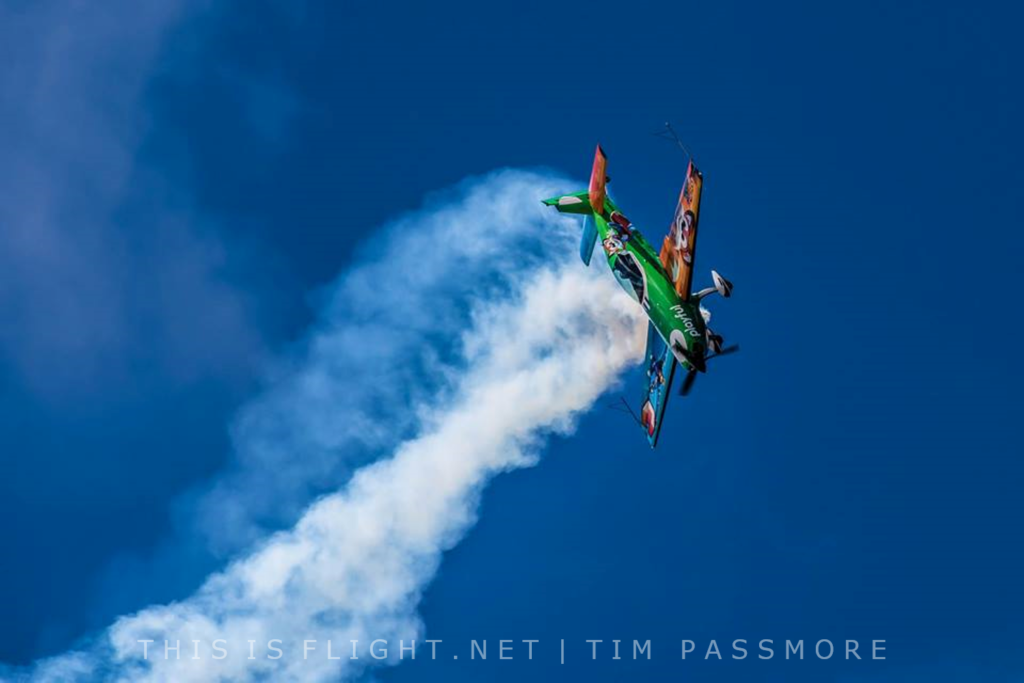 His performance was interrupted by a strange plane wandering into the area and flying around erratically. The commentator made radio contact with the pilot, only to discover that the pilot had just bought the plane, and was teaching himself to fly using the owners’ manual, which he’d dropped! This was first glimpse for many in the crowd of air show legend Kent Pietsch, one of the best stick-and-rudder men around. He got a lot of laughs by scraping a wingtip of his Interstate Cadet along the runway and other similar stunts. He returned twice more in more serious acts. In the first, he landed on a moving truck; this is no mean feat in a right angle crosswind, like he faced both days. For his last performance, he climbed to around 6,500 feet and cut the engine. Powerless the rest of the way, he made a series of graceful maneuvers before making a dead stick landing and taxiing up to a person holding their hand in the air and gently placing the spinner against the palm of their hand. 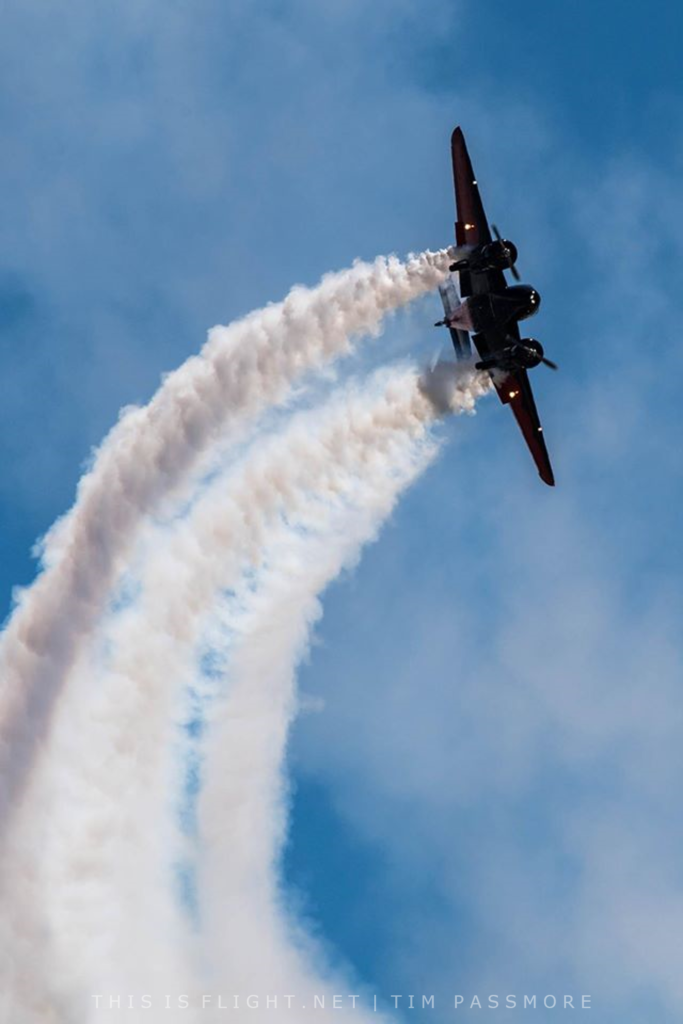 On Sunday, the truck Pietsch landed on was driven by Matt Younkin, another legend himself. Matt flies a vintage Beech 18, with twin Pratt & Whitney radials. Yes, twins! This guy makes the lumbering giant of acrobatic aircraft look almost nimble and stately at the same time. Flying most maneuvers short of the vertical climbs, Younkin flew Cuban 8s, rolls, and loops, all the time trailing twin plumes of the some of heaviest smoke in the business. 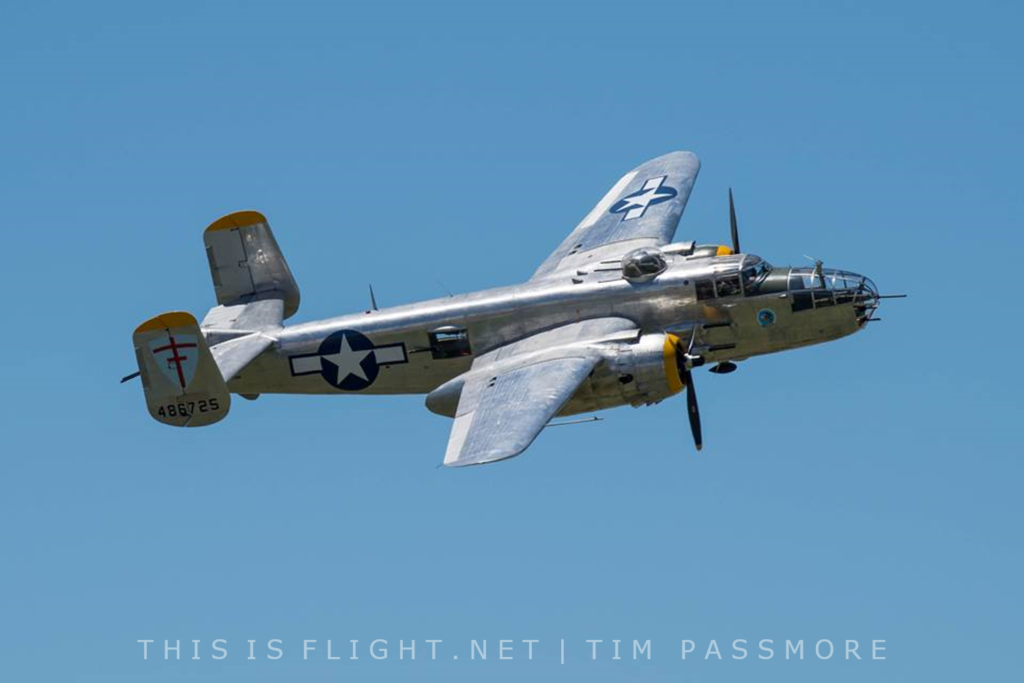 Classic warbirds flew both days as well. Aviation buffs were treated to appearances by two P-51D Mustangs, two A1 Skyraiders (single and duel-seat), an F4U Corsair, B-25 Mitchell, P-40 Kittyhawk, and a C-47 Dakota. The Skyraiders, C47, a C-7 Caribou and OV-10 Bronco took part in a reenactment of a Vietnam-era downed pilot rescue, complete with explosions and “napalm”. 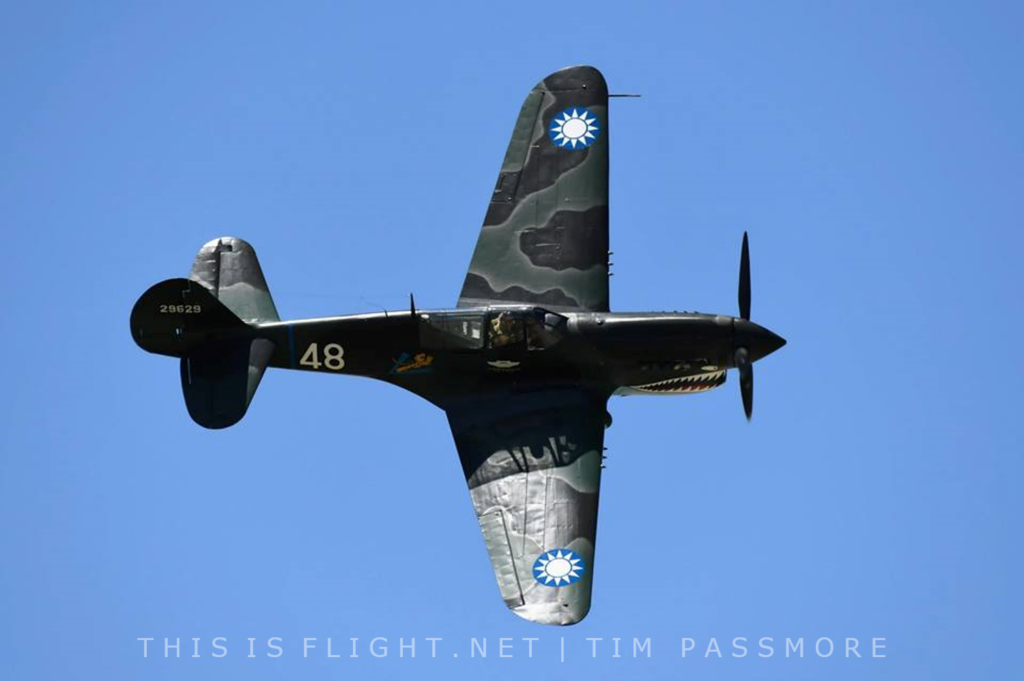 The second of the two Mustangs flew alongside the amazing F-35A Lightning ll for the USAF Heritage Flight. Both of these great looking planes also flew individually, giving the F-35 the chance to give a glimpse of its awesome capabilities. Major Will (D-Rail) Andreotta takes great pride in flying the F-35, and gives the crowd a great show. He performed a ‘Maximum G’ turn, a power climb, and a couple of other individual photo passes to give fans plenty of great photo opportunities. 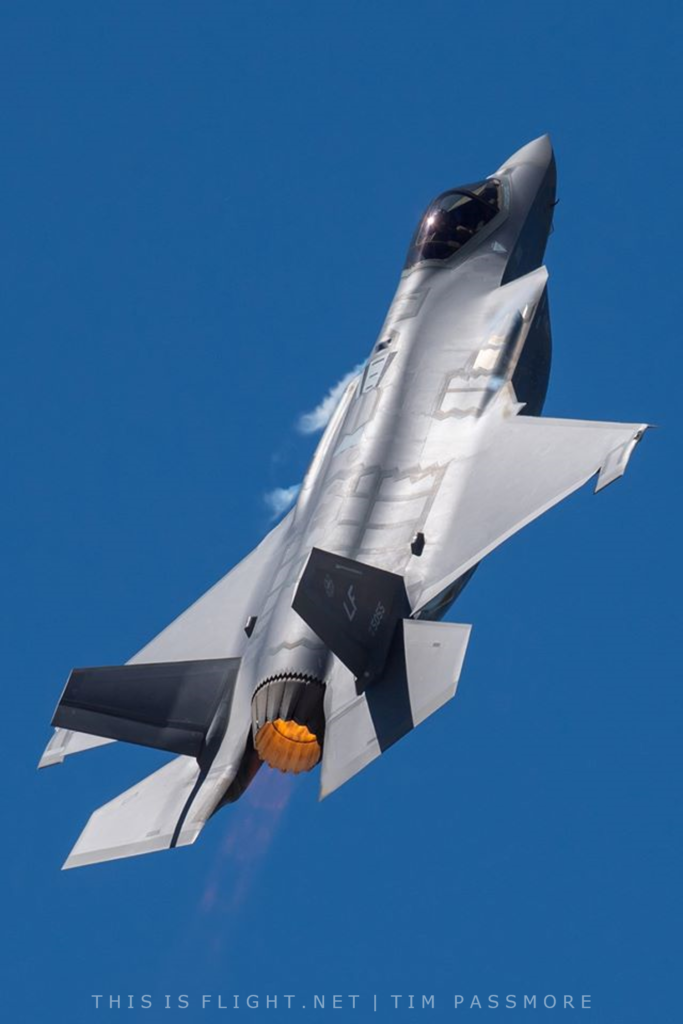 Jerry Conley also showed off his great looking de Havilland Vampire jet fighter. Just barely too late to see service in WWll, this was the first single-engine jet fighter to go into production in England. While not a full aerobatic show, he did put the plane through loops and slow rolls. The most noticeable part of this performance was the hissing whisper of the engine in passing, as opposed to the roar of today’s jets. 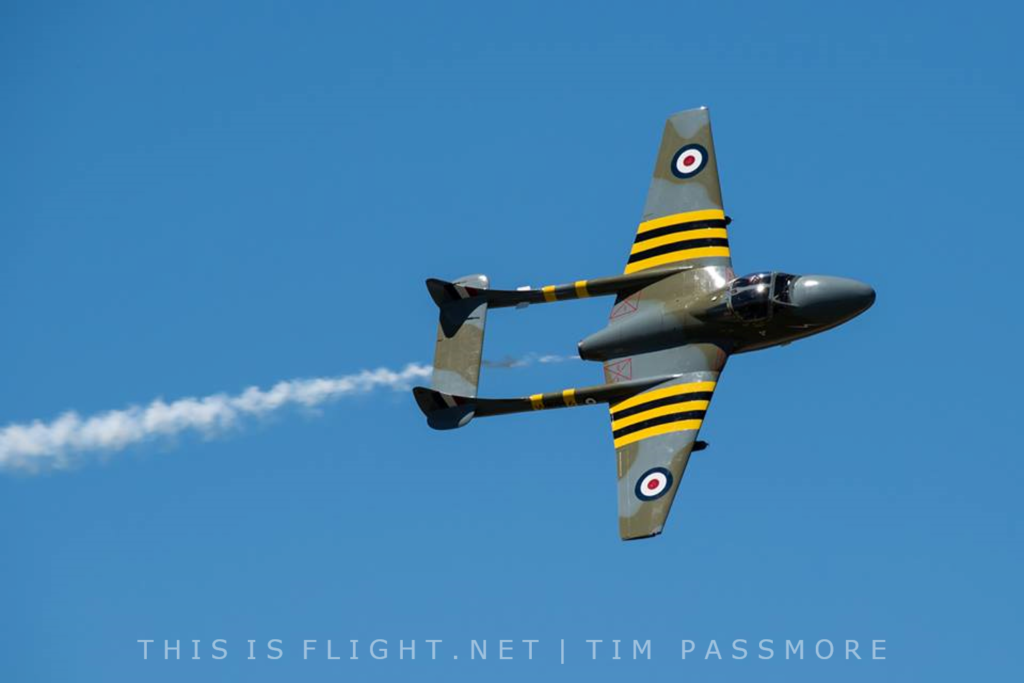 The performance by the USN F/A-18F Super Hornet from the VFA-106 Gladiators gave the Thunderbirds some serious competition as far as great photo moments go. Many of the maneuvers were of the type to create the most dramatic vapor trails, something I always love catching. The real crowd-pleasers are the high-speed pass and the knife-edge “banana pass”, coming in from behind and to the right and curving around to exit behind and to the left. 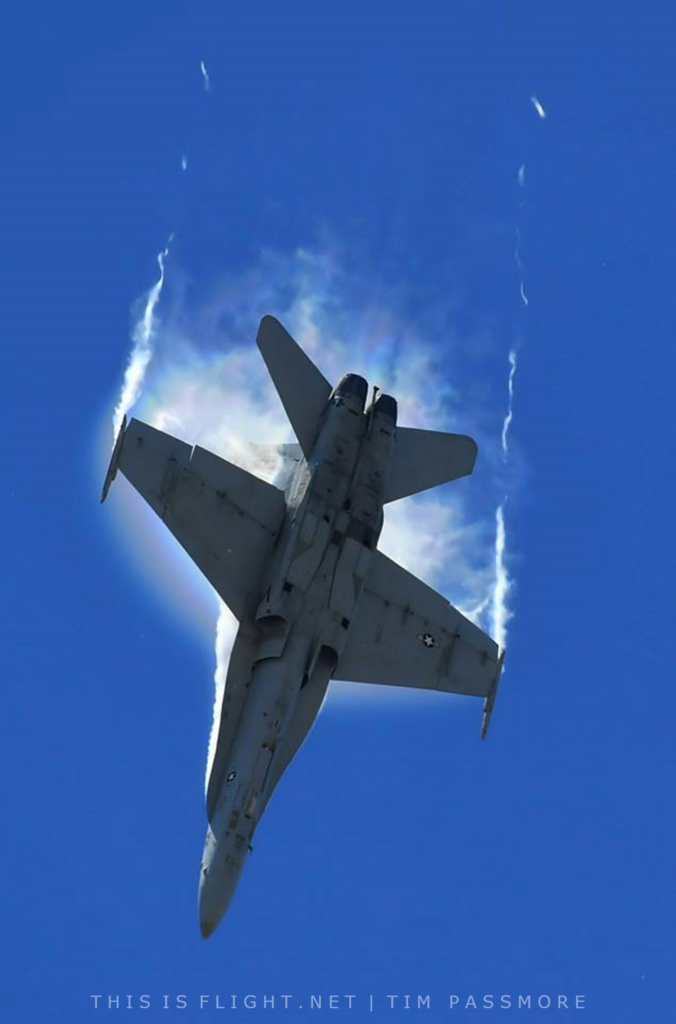 By the time the Thunderbirds, the headline-act launched, the main drawback to the base’s layout was becoming a factor for photographers. With a north-south runway and the ramp on the east side, the crowd is starting to look into the sun by the early afternoon. As a result, most shots of the Thunderbirds are back-lit. This does nothing to take away from the flying, however, and there is little that the organizers can do anything about, but it did seriously affect photos. 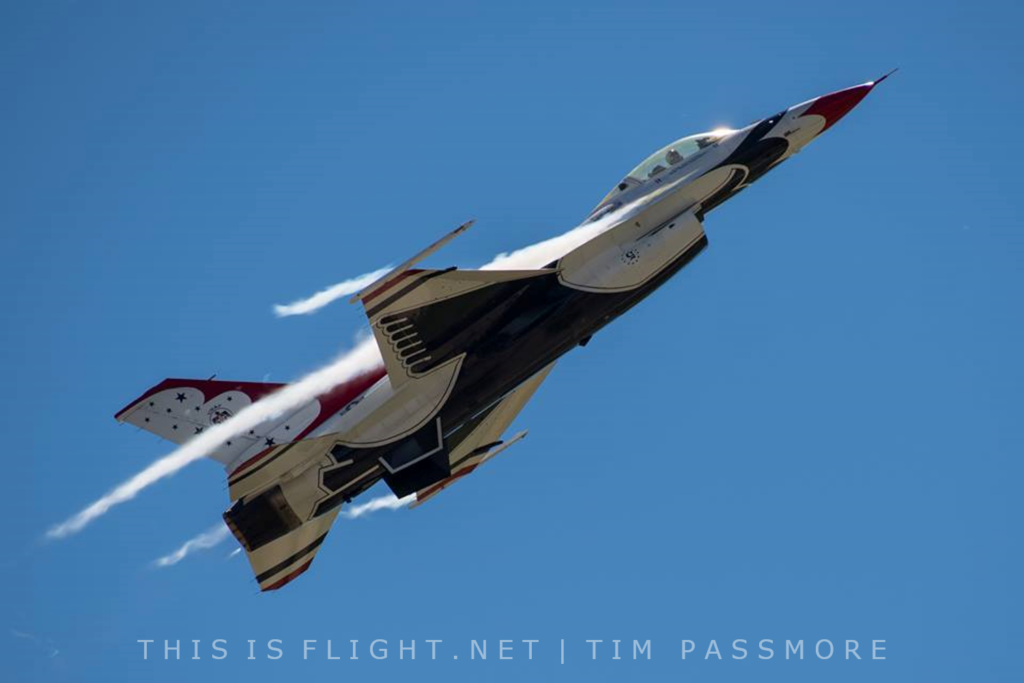 On both days the two solo pilots, #5 Major Alex Turner (lead solo) and #6 Major Whit Collins (opposing solo), launched separately after flight leader Lt. Col. Jason Heard had led the rest of the team off in formation. With excellent weather, they were able to fly their high shows on both days; these include the zoom climbs and star bursts that are not possible in a low show. The opposing passes, Calypso passes, and formation maneuvers were precise, as usual. The closest to criticism was the timing of the high bomb burst cross, which saw one plane about a second late each day. Watching them as they descend from the high burst, it is amazing that it comes off at all. That slight “criticism” aside, the Thunderbirds once again amazed the crowd with superb airmanship. 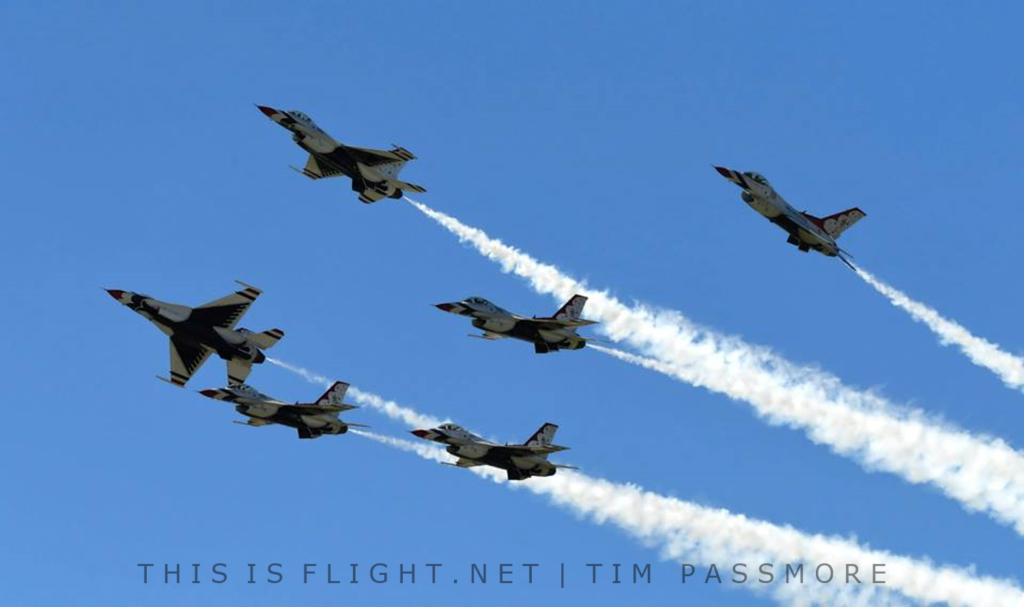 All-in-all, record crowds had great weather to see some incredible flying by aircraft of all types, and I am already looking forward to Tinker AFB’s next air show. Thanks to Gerald Bryza and all the Public Affairs staff for their hospitality and help all weekend.