Rain. Those four little letters tried to steal the show from ‘Thunder over Louisville’ 2017. Even up to the day of the show, a 100% chance of rain loomed over the 7 hour 30 minute airshow schedule. I am happy to report, however, that the rain was a non-issue for the event. For those of you who have never experienced Thunder over Louisville, this event is unique in many ways; for many, the 7-hour flying display isn’t even the highlight, as the event also boasts one of North America’s largest firework displays, kicking off the two-week celebration up to the Kentucky Derby. 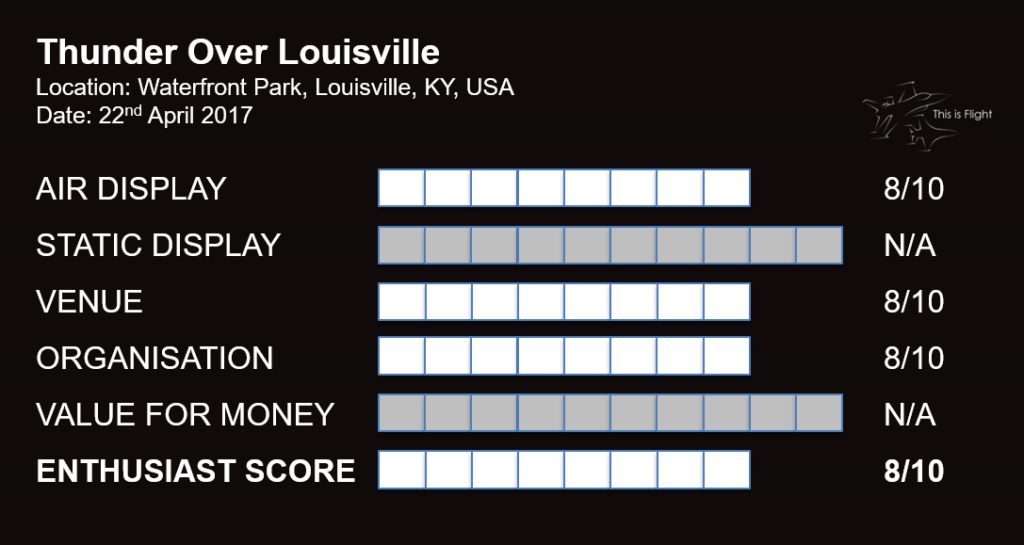 I have been fortunate enough to attend Thunder over Louisville for over a decade straight without lapse. Every year that I photograph the event, I try to improve something. Generally it’s a piece of photography gear or other tool to improve my pictures but this year I tried something totally different: I earned by Amateur Radio Technician Class License. What in the world does this have to do with photography, you ask? Many states in the US have strict laws regarding carrying a scanner. Obtaining my Amateur Radio Technician Class License allows me to legally carry a scanner which I used to listen to the air boss communicate with the pilots. 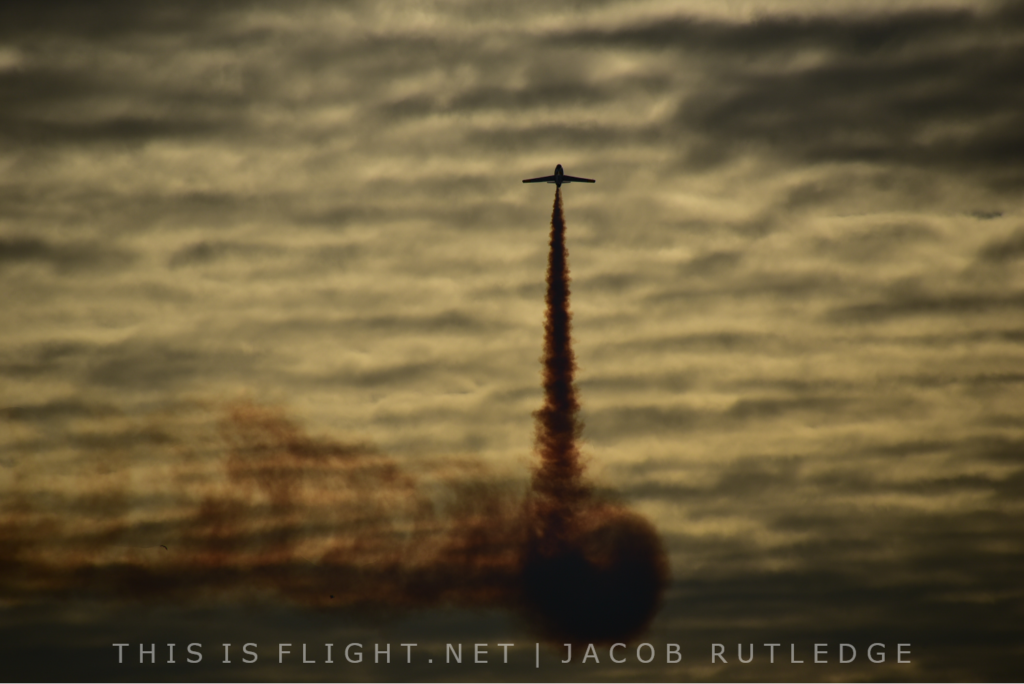 This was a huge help to me as a photographer as I had information such as the timings of inbound aircraft, the number of passes and direction of approach, not to mention the fact that listening to the pilots communicate to the air boss was educational and entertaining. There are phone apps that allow you to listen to ATC and often the airshow frequencies, but at a show like Thunder over Louisville where hundreds of thousands of people attend, the application is only as good as your cell service. 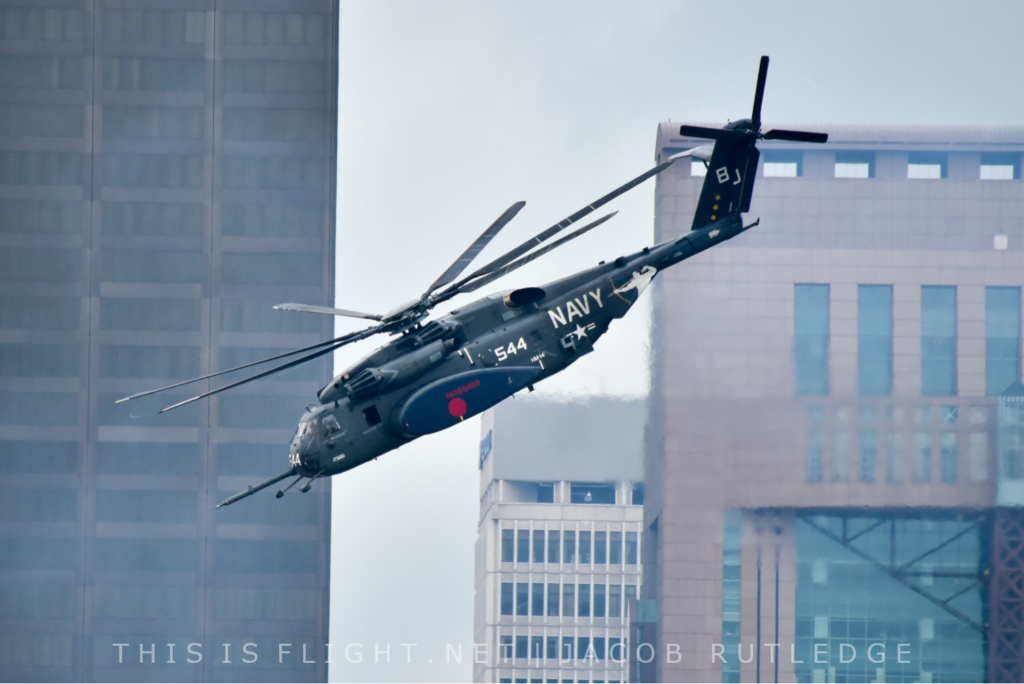 The air show kicked off on schedule at 2:30PM. The ceiling was approximately 1600 feet which impacted the Army Golden Knights’ scheduled jump. Instead of the scheduled jump, a US Navy MH-53 Sea Dragon carrying an American Flag greeted the crowd. The Sea Dragon loitered on the waterfront, then exited the air box ascending in front of the Louisville skyline. After the MH-53 had departed, Lima Lima performed in their T-34 Mentors. Only three of the six Lima Lima aircraft flew in the airshow this year but the sound is still something to behold. The yellow T-34 Mentors are picturesque aircraft especially against the moody sky that presented itself at beginning of the show. They were one of three aerobatic teams present, the others being the Red Star Aerobatic Team and Canadian Harvard Aerobatic Team. 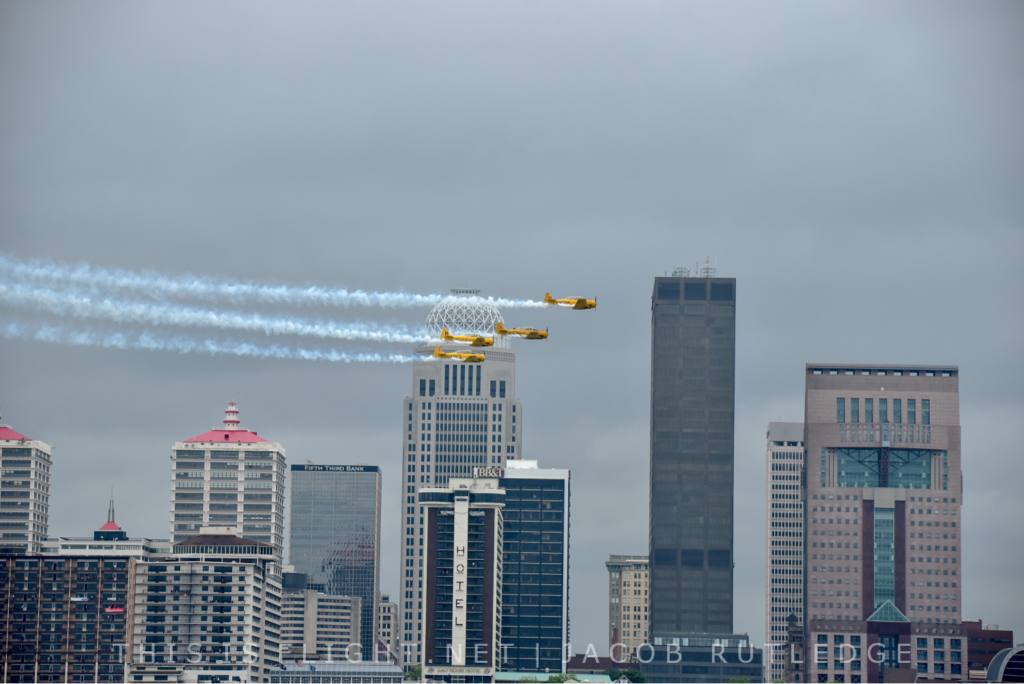 Lee Leet then put on a superb demonstration in his A-29 Super Tucano in Royal Air Force colours. Although the cloud base limited some of the maneuvers he could perform at the beginning of his demo, the crowd appreciated the speed and maneuverability Lee was able to demonstrate. Several minute into his demo the ceiling improved and Lee was able to transition from a flat show to basic aerobatics. On a side note, I had the opportunity to see the aircraft up close at a static display last year – the Super Tucano is a slick machine! 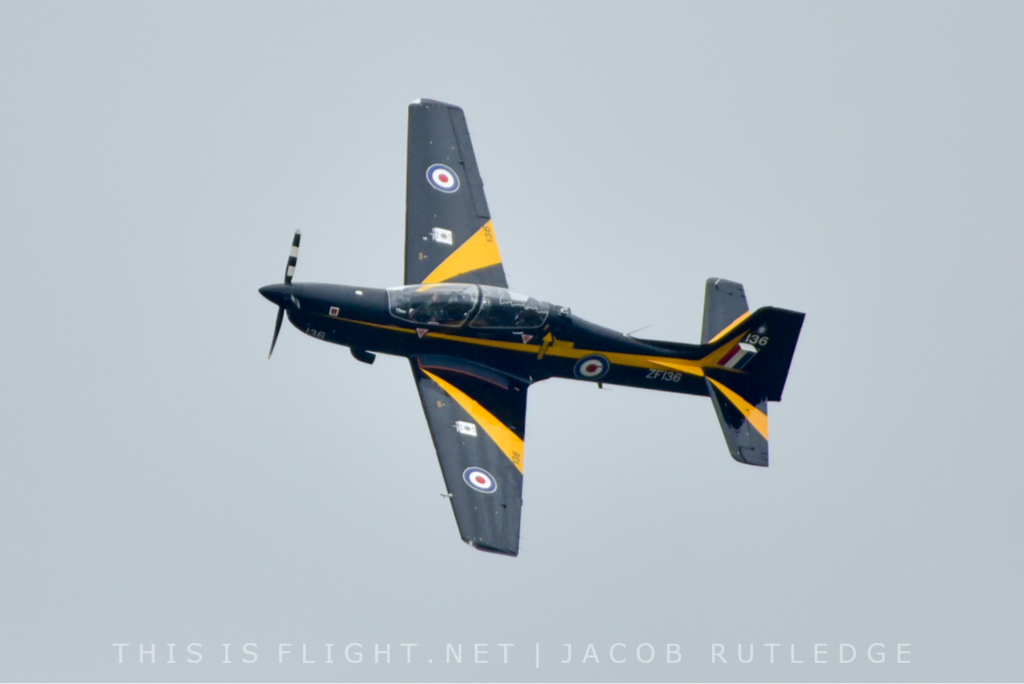 Billy Werth and his Pitts S2C made an entrance coming from behind the skyline and crowd swooping down like a hawk to airshow center. The crowd adores military jet aircraft but Billy’s performance captures your attention. I heard more “ohhs” and “ahhs” coming from Billy’s show than any of the other performances. Hammerhead stalls, knife-edge passes along the skyline;:you name it, Billy executed each maneuver with precision and skill. Billy also flew an encore presentation towards the end of the air show giving the audience a second chance to admire his talent. Additional solo aerobatics were provided by Nick Coleman in his T-Craft. 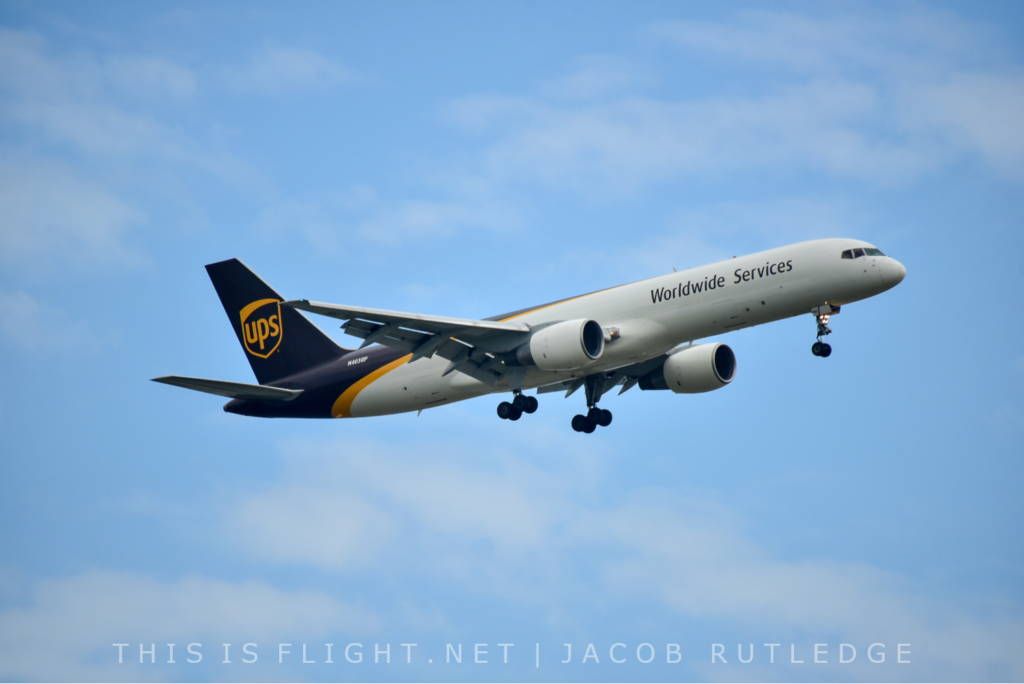 UPS flew one of its many Boeing 757s at the airshow this year. Generally a Boeing 767 is flown but this year was special, as this flight was the first Thunder Over Louisville UPS airshow demo flown by an all-female crew. The UPS all-points hub, Worldport, is located at Louisville Airport. Matt Younkin then performed his day routine in his Beech 18 after the UPS 757 had exited the airshow box, and later executed his dusk routine at the end of the airshow. Both routines in Twin Beech wowed the crowd – Matt really knows how to smoke up the scene performing maneuvers that no one expects out of the aircraft. His Twin Beech is photogenic against the skyline backdrop and the dusk show is second to none. Further classic aircraft came from B-25 Mitchell ‘Panchito’ commemorating the 75th anniversary of the ‘Doolittle Raid’ on Japan in 1942. 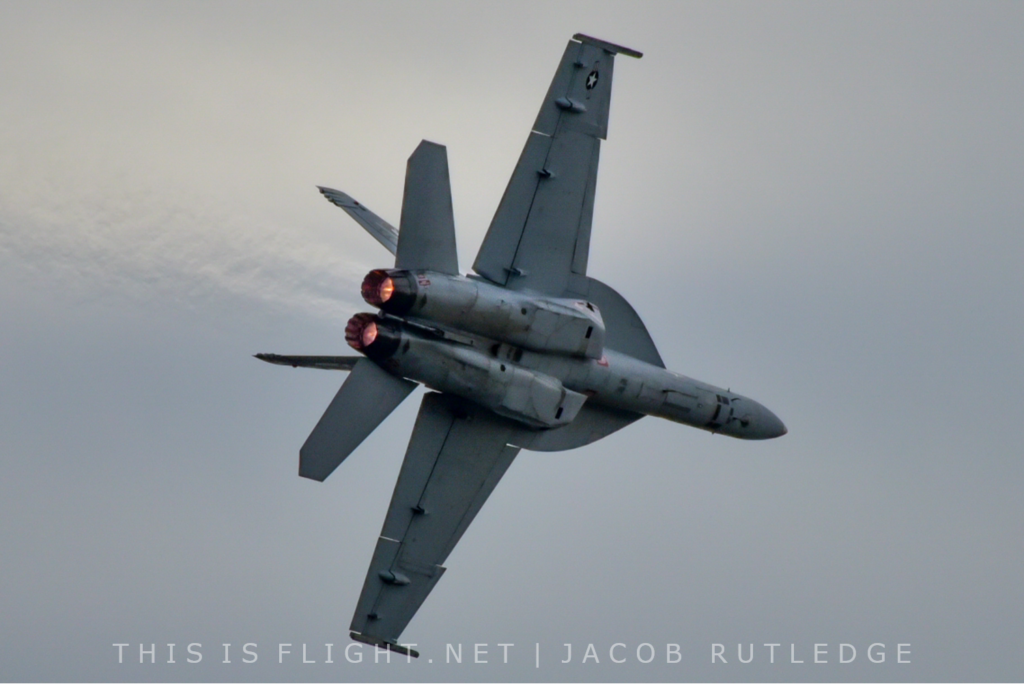 Two RCAF CF-18 Hornets made several clean and dirty passes in front of the crowd after Matt’s demo. The CF-18s have performed at Thunder for several years and their presence is much appreciated. The US Navy F/A-18 Tactical demonstration then provided an excellent solo Hornet display after the CF-18s had completed their passes; the F/A-18 Super Hornet, also known as the Rhino, put on a fantastic demonstration of the raw power and high precision that the F/A-18 is capable of. One of my favorite maneuvers comes towards the end of the dirty and high alpha pass when the aircraft cleans up and afterburners are engaged. For those who came out to practice day the day before, we received a back to back double flight performance. Yes, it might have been raining during the practice but I consider it our treat for showing up. 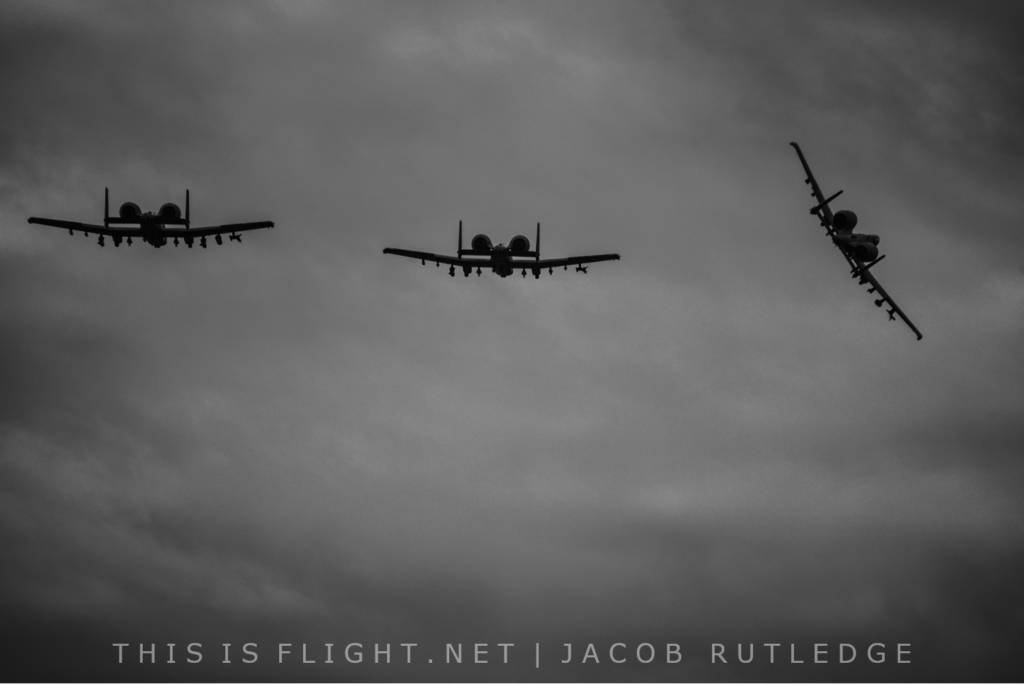 Four A-10 Thunderbolts performed at Thunder last year, but the demo was disappointing and left the crowd yearning for more especially given the aircraft’s flight envelope and storied capabilities. This year, the A-10s spent much more time in the box, performing both solo and formation passes. The whine of the A-10 is unmistakable and this year’s demonstration fulfilled the crowd’s need to see and hear the ‘Warthog’. 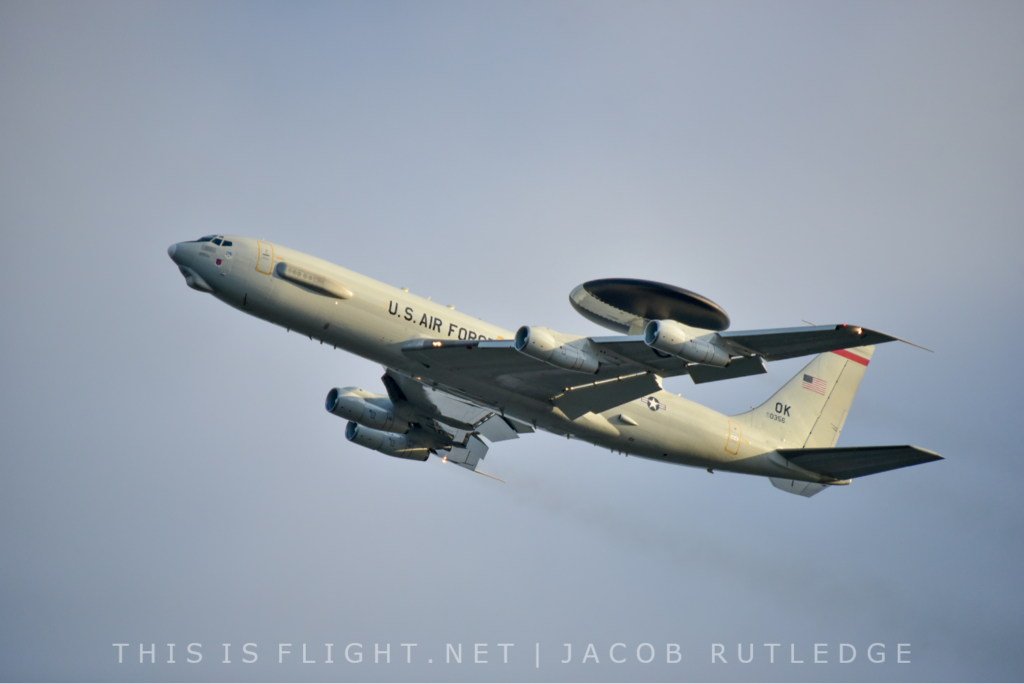 Mention must also go to some of the many aircraft performing flypasts throughout the day. These included the USAF C-17 Globemaster III, USAF KC-135 Stratotanker, USAF E-3 Sentry and RCAF CT-142 Dash 8. A C-130 Hercules and a pair of MH60 Seahawk helicopters which both demonstrated their tactical capabilities. 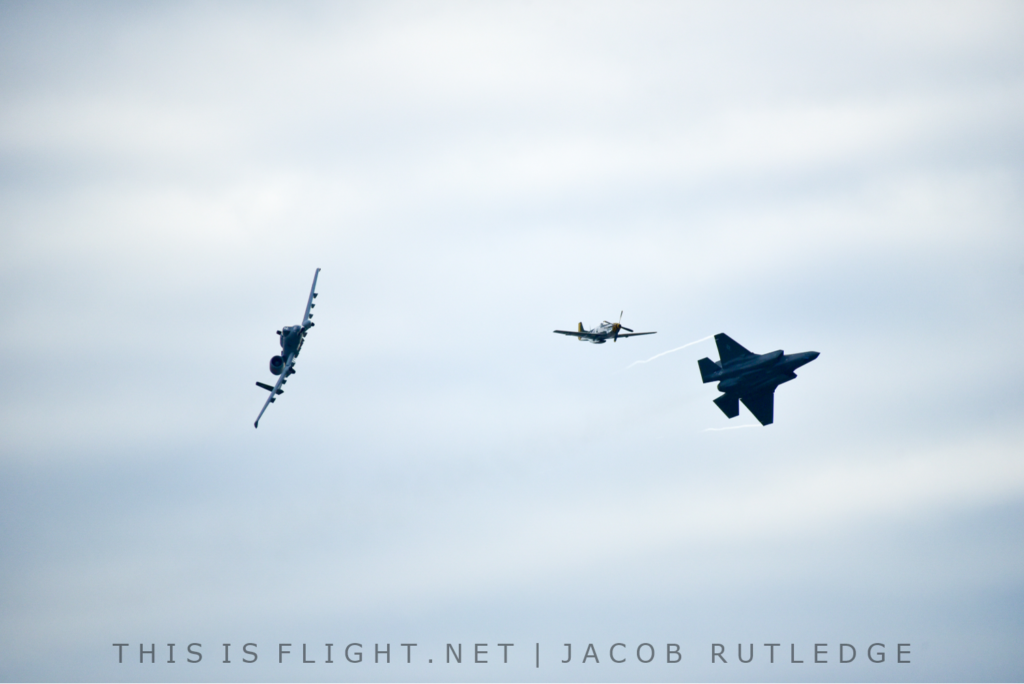 The sky conditions continued to improve throughout the day, and by the time the USAF Heritage Flight was ready to perform, we had the most amazing golden sky. I transitioned from show center to a location 8 stories up and at the east side entry to the air box. My new position allowed me a great view to the west but I was unable to see anything to the east because the building was blocking the view, so the scanner was again of great assistance as I had little to no visual cue of inbound aircraft. The Heritage Flight with the F-35A Lightning II was another first for Thunder over Louisville. While the F-35A is only performing in Heritage Flight formations rather than full demonstrations, I was impressed with the agility shown, and the roar of the F-35, the whine of the A-10 and the whistle of the P-51 made for a unique collage of sounds. 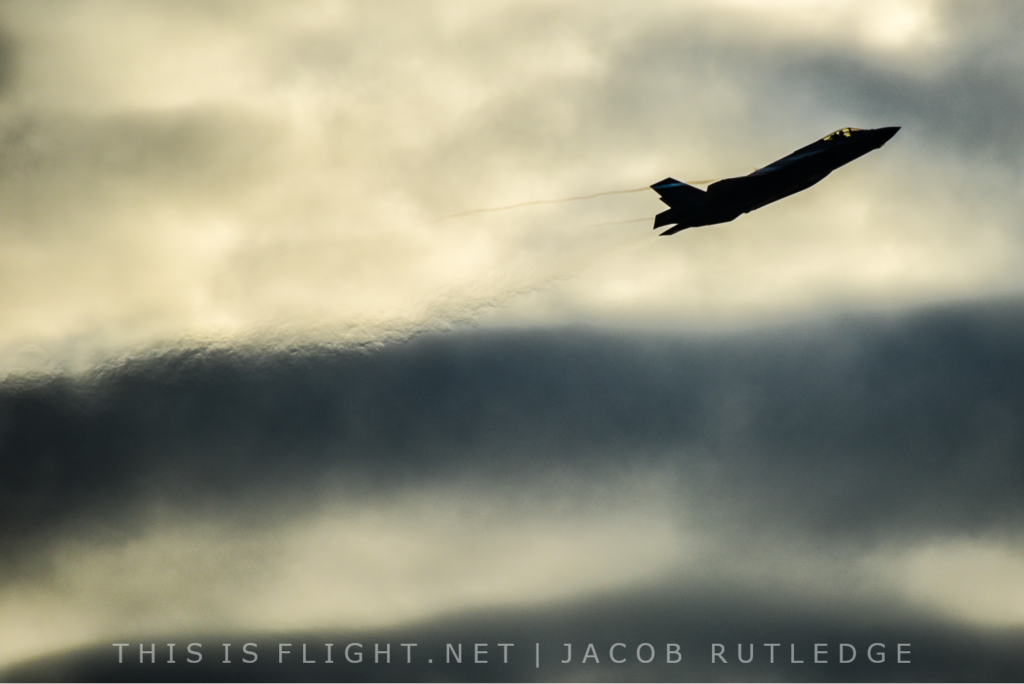 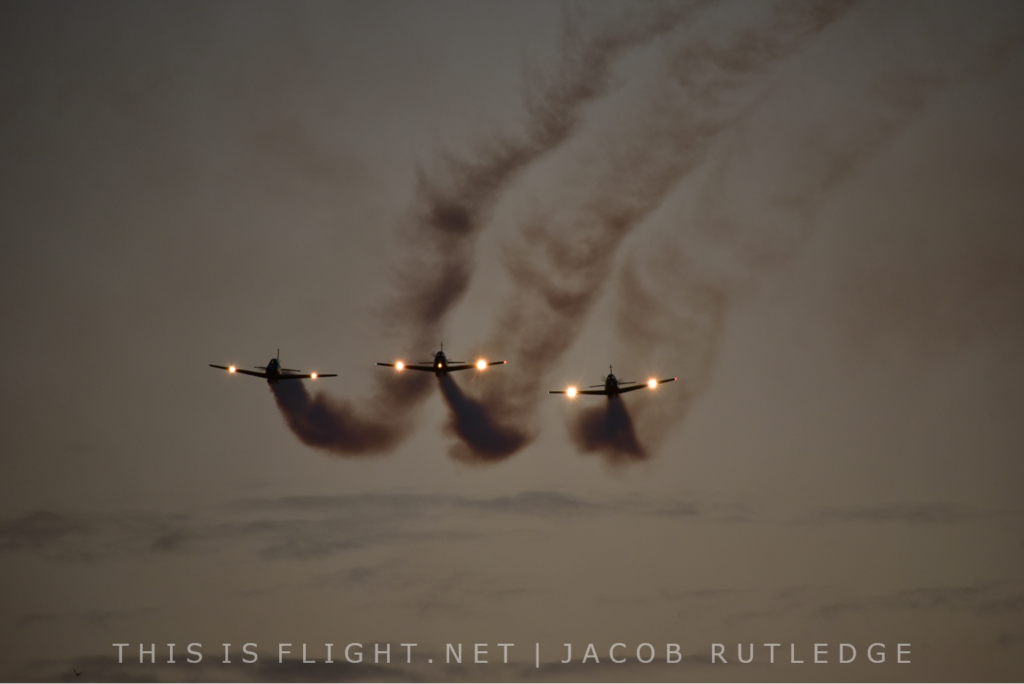 As darkness set in, the Canadian Harvard Aerobatic Team and Lima Lima returned for their dusk displays and some rare classic jet action was provided by the F-86 Sabre. The Golden Knights were finally able to jump and Matt Younkin returned to round off the flying display. Capturing anything moving during the transition from dusk to dark proved to stretch my photography gear beyond its limitations. 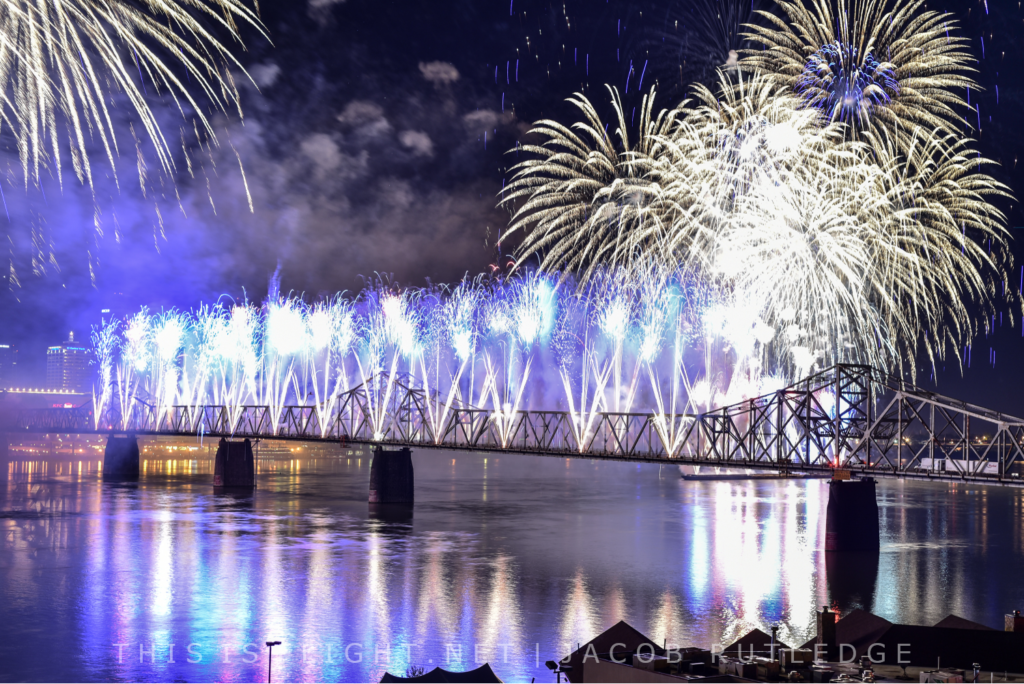 You can’t talk Thunder Over Louisville without talking fireworks. Thunder over Louisville is one of North America’s largest fireworks shows, and this year the theme was “Local and Original”. While the main attraction for me is the airshow, the 28 straight minutes of fireworks are a spectacular end to the day!