Close your eyes… imagine going back over 70 years and being a paratrooper during World War II. Open them and picture yourself opening the flap on the canvas green tent to meet up with your fellow brothers in arms… welcome to WWII Weekend at the Mid-Atlantic Air Museum in Reading, Pennsylvania; a weekend to go back to experience life of the ‘Greatest Generation’ and have an idea of the living conditions they endured during war, and a close look at the technology they had at their hands. Every part of this show is WWII: no modern equipment, apparel or aircraft are allowed to participate. 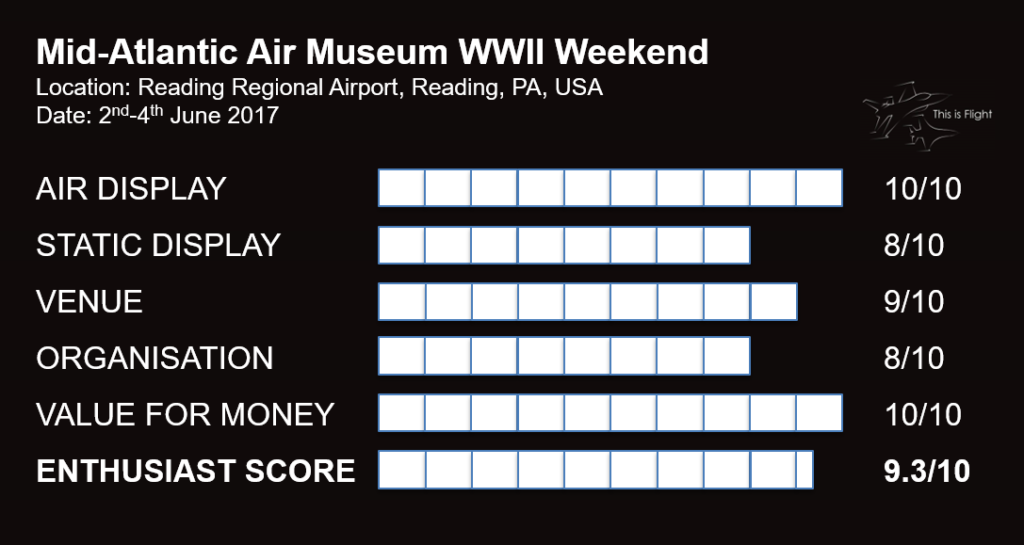 Every few steps, you encounter a part of history at the WWII Weekend in Reading, where you are able to walk from an American to a Japanese, to a British, to a Chinese camp, knowing all equipment is authentic, giving a real idea what it would have looked like over 70 years ago. A feeling of pride, happiness, and patriotism fills one’s heart as they walk through the ground and see the 1,000+ re-enactors in WWII apparel. This event truly showcases almost all aspects of life during WWII and gives the public an up-front view of military life back then. The sound of gunfire also fills the camps as there are small villages that are set up to host skirmishes between Allied and Axis powers. 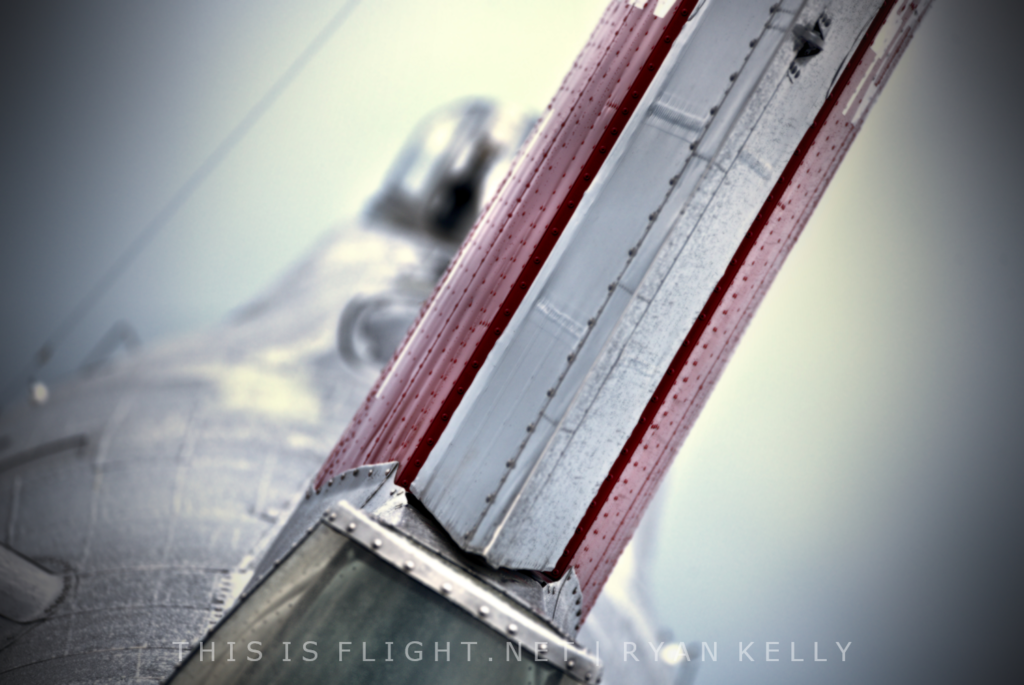 Not to be outdone, there would be several aircraft that represented the era including the B-25 Mitchell, C-47 Dakota, B-17 Flying Fortress, one of two flying B-29 Superfortresses, the last flying Curtis Helldiver, and the ever-present P-51 Mustang. The host museum, Mid-Atlantic Air Museum (MAAM), owns a B-25 and a TBM Avenger that would not only be on static display, but would also participate in the flying display. The other aircraft are almost all exclusively owned by other museums. B-17 ‘Yankee Lady’ is owned by the Yankee Air Museum, B-29 ‘FiFi’ along with the P-51 ‘Red Nose’ and C-45 ‘Bucket of Bolts’ are owned by the Commemorative Air Force, and the Delaware Aviation Museum brought their B-25 ‘Panchito‘. These are just to name a few of the museums and their aircraft that were present for the weekend. 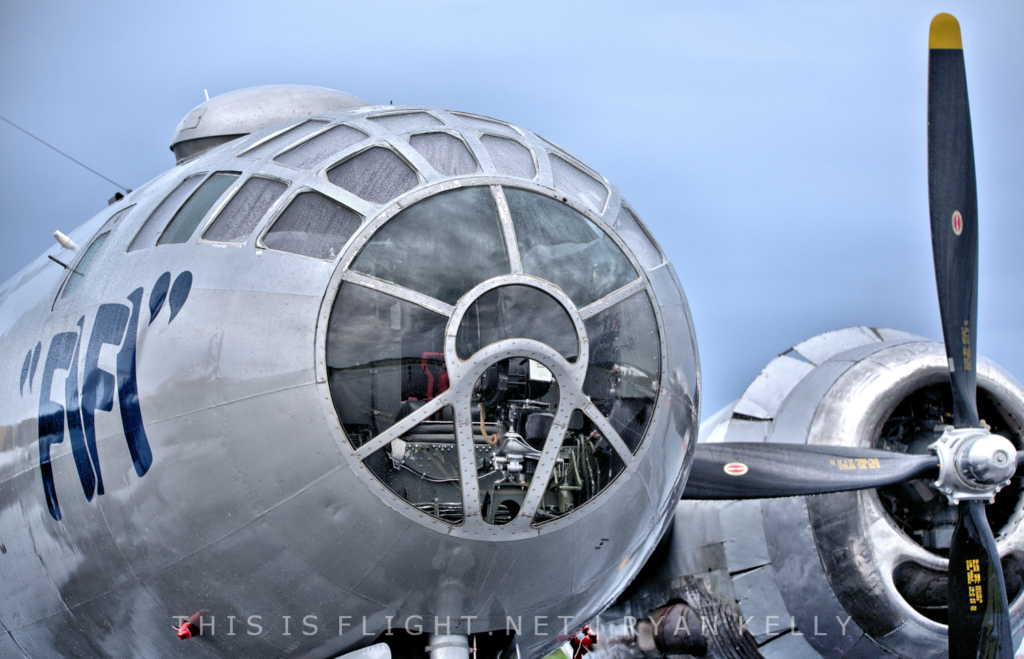 There were several takeoff and landing sequences as any of the aircraft in the airshow were offering rides for purchase in support of the museum and keeping the aircraft flying. The event allows a spectator to walk the grounds and see everything the show has to offer on the ground prior to the flying portion that starts around noon. The show opens with the National Anthem and follows with a number of light aircraft and trainers such as the L-19 and Boeing Stearman to name but a few. The multiple aircraft then completed four or five circuits to give the crowd a look at the aircraft. Several T-6s (SNJs or Harvards depending on what part of the world you live) took off to perform a few formation passes including a missing man formation. One of the aircraft in the formation, belonging to Kevin Russo, broke formation and begin his aerobatic routine for several minutes to showcase some of the basic maneuvers that pilots would learn before they would step into more powerful and agile fighters. The American Airpower Museum’s P-40 Warhawk, The Jackie CII, followed with a thrilling performance of beautiful aerobatics with multiple high speed and photo passes with a blue sky background. 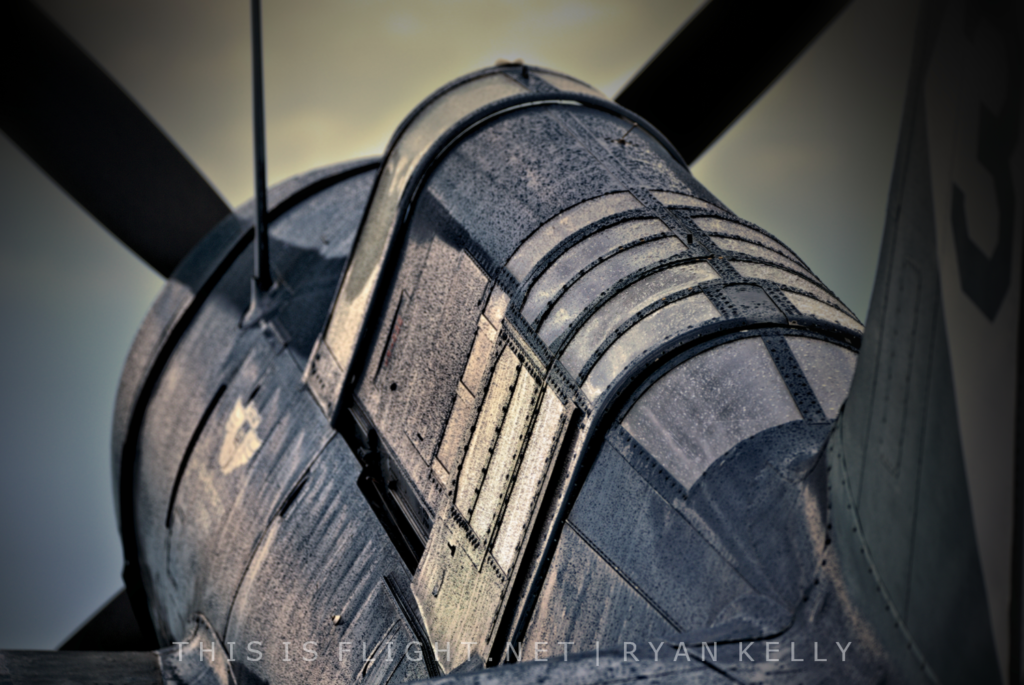 The Naval segment of the show took to the skies after the P-40. The crowd was treated to a TBM Avenger, Grumman Wildcat and the only flying Curtis Helldiver. Also joining the performance were two replicas of Japanese aircraft, the Val and Kate. The dark blue markings of the aircraft stood out against the background on takeoff. After several textbook passes showing off the muscle and grace of these beautifully restored aircraft, Greg Shelton and his Wildcat performed their aerobatic performance. It should be noted that Shelton does not do a normal takeoff in the Wildcat; as soon as the aircraft is airborne, he pulls back on the stick and points the aircraft into a 30-45 degree climb – it is truly an amazing sight to see an old bird get airborne that way. He and is aircraft are well known in the industry as he pushes the Wildcat to its limits and hugs the deck on every pass. The speed and unique sound of the Wildcat, the puttering noise of a vintage radial make for a unique experience. 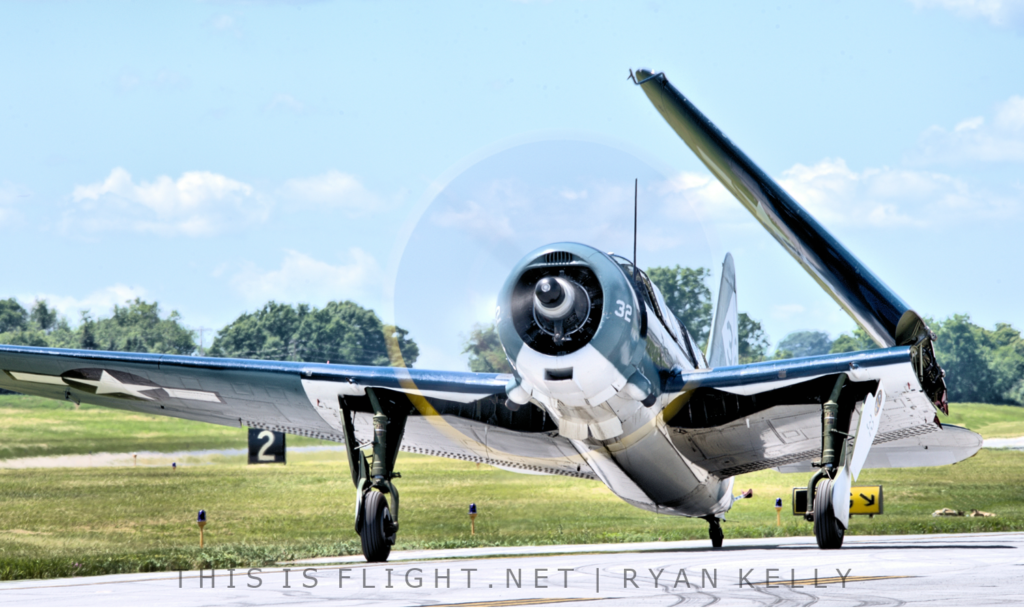 A highlight of the show at Reading is the skirmish between the Germans and US in front of the crowd line. Armored vehicles including tanks and half-tracks accompany the re-enactors on the ‘battlefield’ as the two sides go at it. The C-46 ‘Tinker Belle’ was flying overhead with paratroopers ready to jump into battle to support the Allies. Unfortunately, strong gusts at altitude made the jump unsafe (safety is always a priority at shows for obvious reasons). As the battle on the ground closes, the Americans close in on the Germans and capture the remaining forces (the Americans win the battle every year). 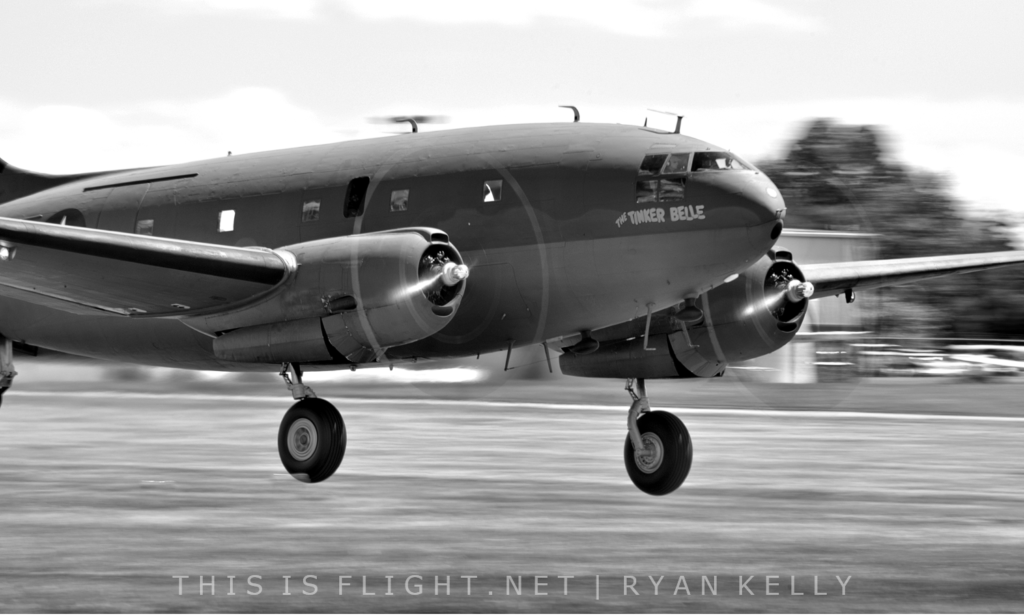 The skirmish is always enjoyable because you get a glimpse at the sounds of the vintage weaponry being fired. The ‘heavies’ followed with multiple B-25s, C-45, C-47 (DC-3 with USAF markings) and B-17. Rumbling down the runway one at a time, if you closed your eyes, you would be taken back in time when these vintage birds were the tip of the spear of American technology. The heavies made several passes showcasing speed, open bomb bay doors, and the grace of a smooth photo pass. 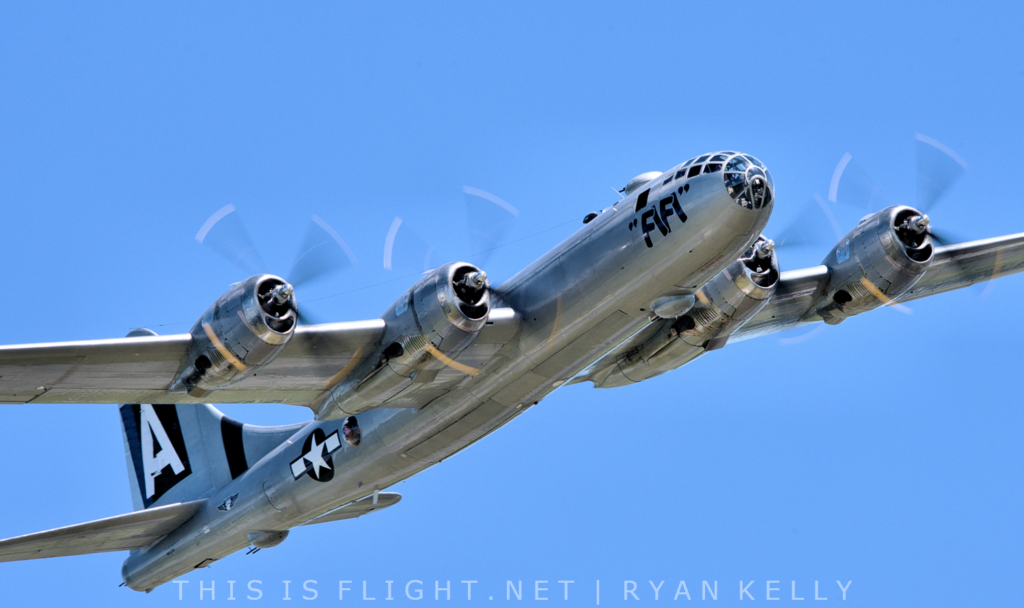 One ‘heavy’ that got the airspace to herself was B-29 ‘FiFi’, and she uses every inch of it in her performance. It is an amazing site to see this old girl and how fast she is despite her size. Her massive propellers alone can fill a viewfinder on a camera. After FiFi, came the fighters: two P-51D Mustangs, a Mk.IV Spitfire, Bell P-63 King Cobra and a P-40C Warhawk. Merlins and Allisons filled the air with sweet sweet beautiful engine noise as the five aircraft joined up after takeoff for formation passes that would follow with a high speed pass and photo passes of each aircraft. 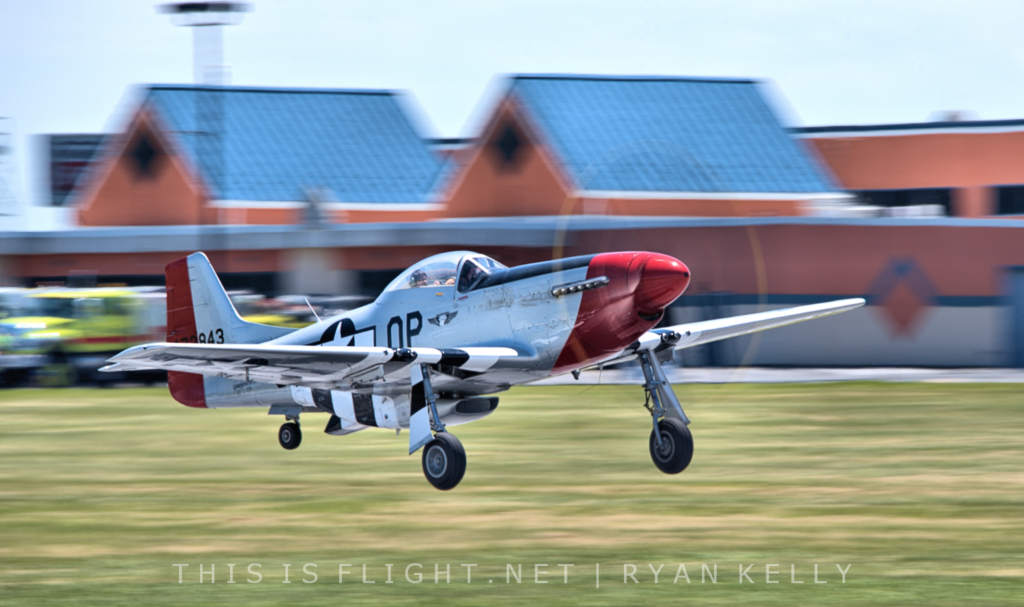 Closing the afternoon were the infamous GEICO Skytypers. The team were making their WWII Weekend debut, and their inaugural show did not disappoint the crowds. Decades of experience fill the cockpits of the Skytypers and the flying ability of these great pilots truly shows. The very last maneuver of the day, which is not typical of the Skytypers, was a missing man formation as Taps was played. If there was ever a perfect way to cap off a show such as this one, this was the way to do it. I have attended this show for years and it always impresses and seems to increase with popularity. It’s important to keep our history alive, and I for one am glad to see that the public supports this event more and more, and the museums have so many dedicated men and women to keep these timeless aircraft in the air and preserving history. This show is a reminder that freedom isn’t free, and this generation was truly, the ‘Greatest Generation’. 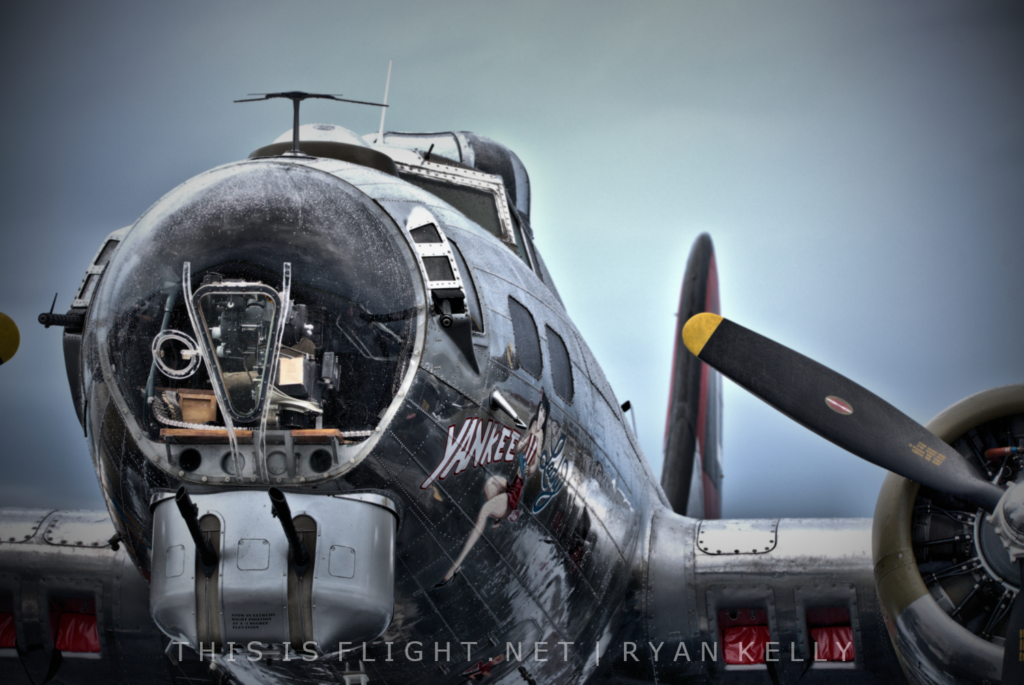