The theme of this year’s Maxwell Air Show was ‘Heritage to Horizon’, commemorating several anniversaries: the US Air Force’s 70th Anniversary, the centennial of the US entrance into WWI, and the 75th Anniversary of the Tuskegee Airmen. The opening act was the Air Force academy airmen, parachuting in the flags of France and the United States while each countries’ national anthem played. The first flying act set the tone for the show with a P-51 and a F-16 of the USAF Heritage Flight, both sporting the Tuskegee Airmen’s Red Tails, in close formation. The juxtaposition of the past and present was woven all through the flight displays and statics. 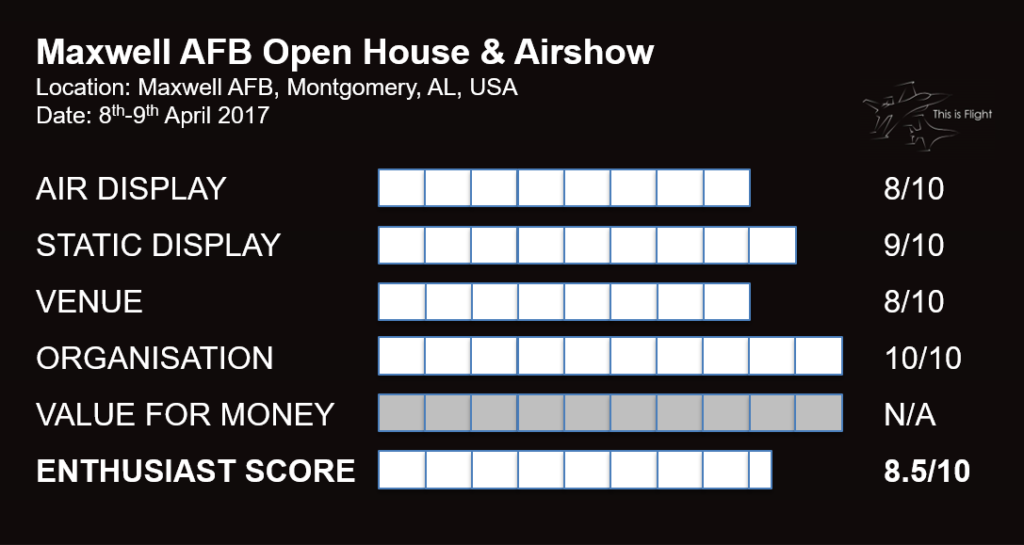 The organizers and the Air Force did a good job keeping to the script. The Curtis Jenny was followed by a flypast by an F-35A Lightning II right on script. There were also two classic jets at the show; Jerry Conley put his de Havilland Vampire, an aircraft that holds many firsts, through it’s paces, and Greg Coyler displayed his T-33 Shooting Star ‘Ace Maker’. Then, the group Tora, Tora, Tora provided a stirring tribute to the attack on Pearl Harbor complete with pyrotechnics! The Air Force then treated us to a B-2 Spirit fly over; to see one live is quite an experience! 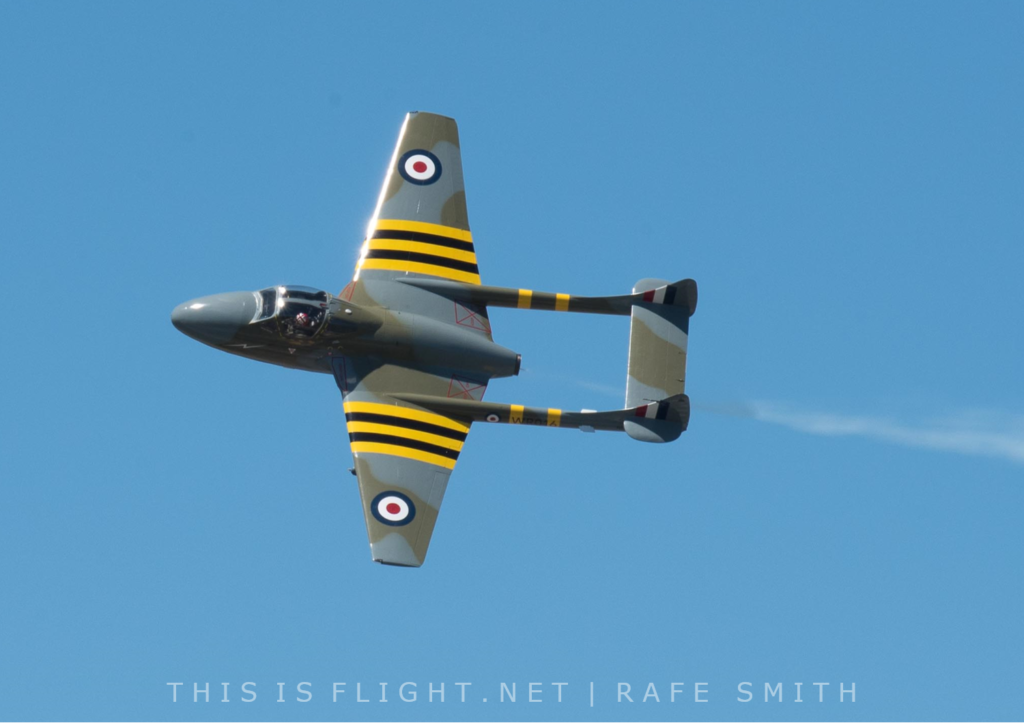 Rob Holland, Bill Stein and Jeremy Holt wowed the crowd with their modified acrobatic aircraft. They performed all manner of twists and rolls and the crowd favourite, stalling the aircraft and holding it in mid air. In a salute to barnstorming days, Greg and Ashley Shelton provided some good old fashioned wing walking. 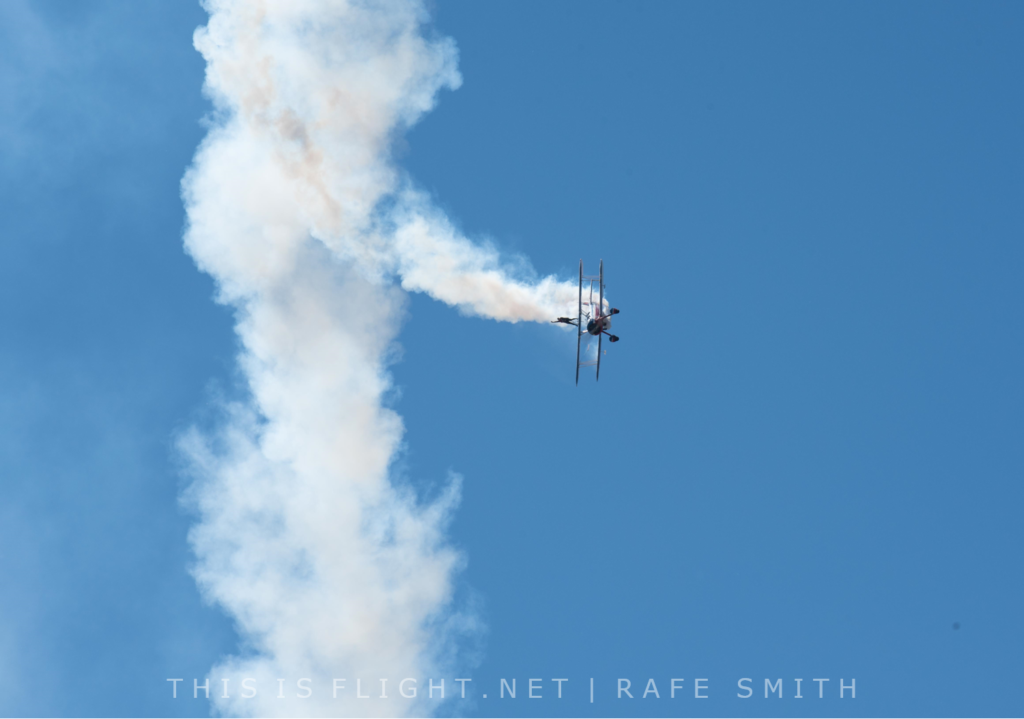 As I mentioned before, this celebrated the 100th Anniversary of the US entrance into World War One. The French national aerobatic team, the Patrouille de France (PAF), participated in the show as a part of their US tour to commemorate this anniversary. Early in the day, the PAF treated the crowd to a demonstration of their support aircraft, the A400M Atlas. For such a large aircraft, it’s certainly quite nimble. The aircraft has unique geared counter-rotating props which help with performance. 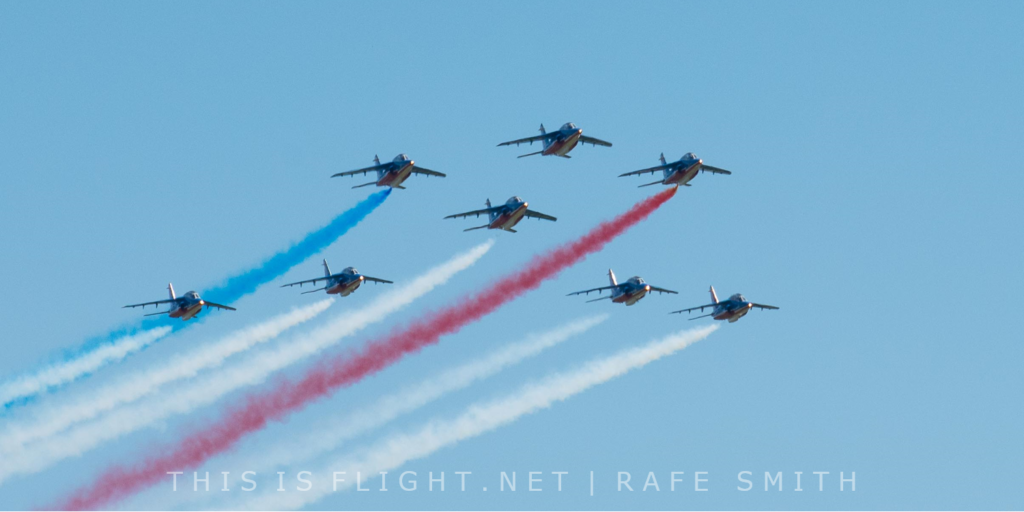 Having never seen the PAF, I did not know what to expect, but I was extremely impressed. I have been seeing the Blue Angels since the 1960’s, but the Patrouille bring a certain “Je ne sais quoi” to their performances. The team fly eight Alpha Jets and use red, white and blue smoke which really adds to their performance. Among their crowd-pleasing manoeuvres is a heart and arrow, drawn by six aircraft’s smoke trails. I have to tip my hat not only to the pilots and crew but also to those responsible for choreographing their routine, who need to be commended! If they come anywhere close to you, it is definitely worth going to see them. 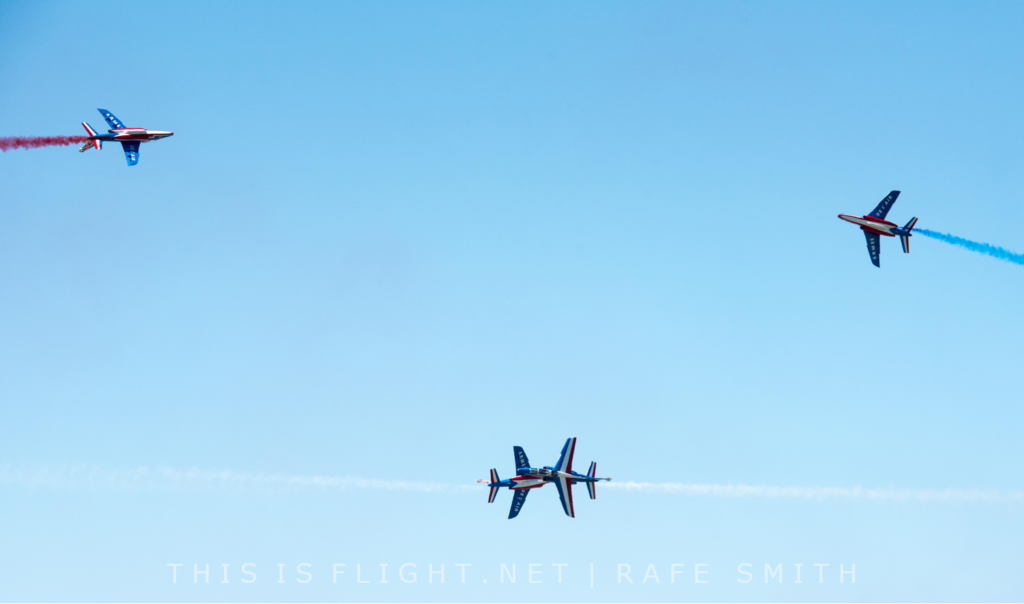 The US Air Force was not to be out-done on home turf, however. They treated us to a demonstration of close air support featuring ground units from Alabama National Guard and F-16 Fighting Falcons from the Air National Guard who continue the legacy of the Red Tails of the Tuskegee Airmen. The ANG also demonstrated their air drop capability from a C-130 Hercules, with each crew dropping their load in the virtually the same exact spot on the runway. The ever popular Thunderbirds were the grand finale and they never disappoint! 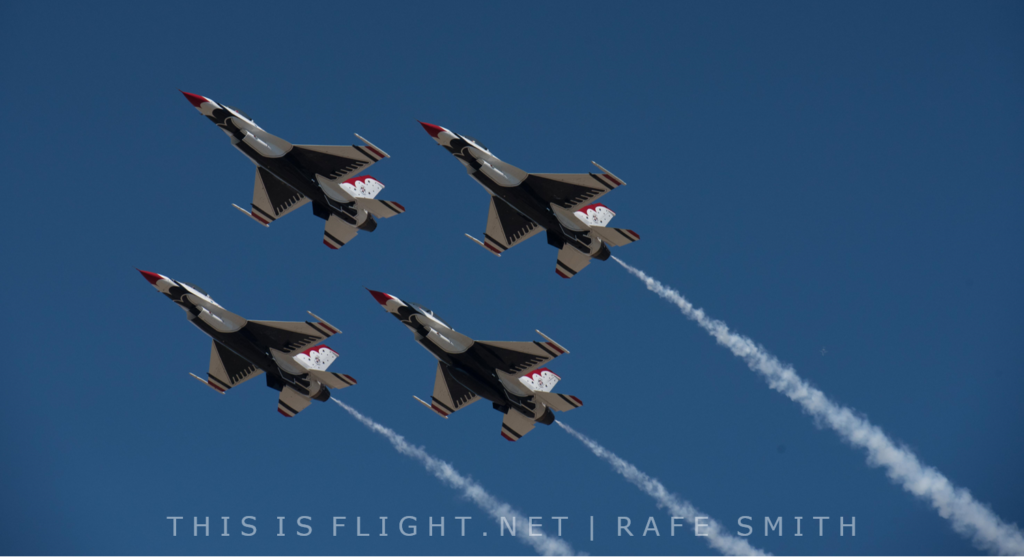 The flying started at 11am and was non stop till 4:30. The weather was perfect, with not a cloud in sky either of the days, and I have the sunburn to prove it! The air show did not skimp on the static displays either – it was predominately an Air Force show and I think just about everything the Air Force currently flies was there: C-5 Galaxy, C-17 Globemaster, C-130 Hercules from the ‘Hurricane Hunters’, B-1B Lancer, KC-135 Stratotanker and much, much more. Most of the larger aircraft were open, allowing all to come aboard. Entry to the air base during the show was easy, however getting out was an adventure due to the shear magnitude of the crowd. It has been estimated that a record crowd of around 140,000 people attended the event. Parking was first come first serve, but since I was there early I had no problems; there were shuttles to overflow parking for those who arrived later in the day. 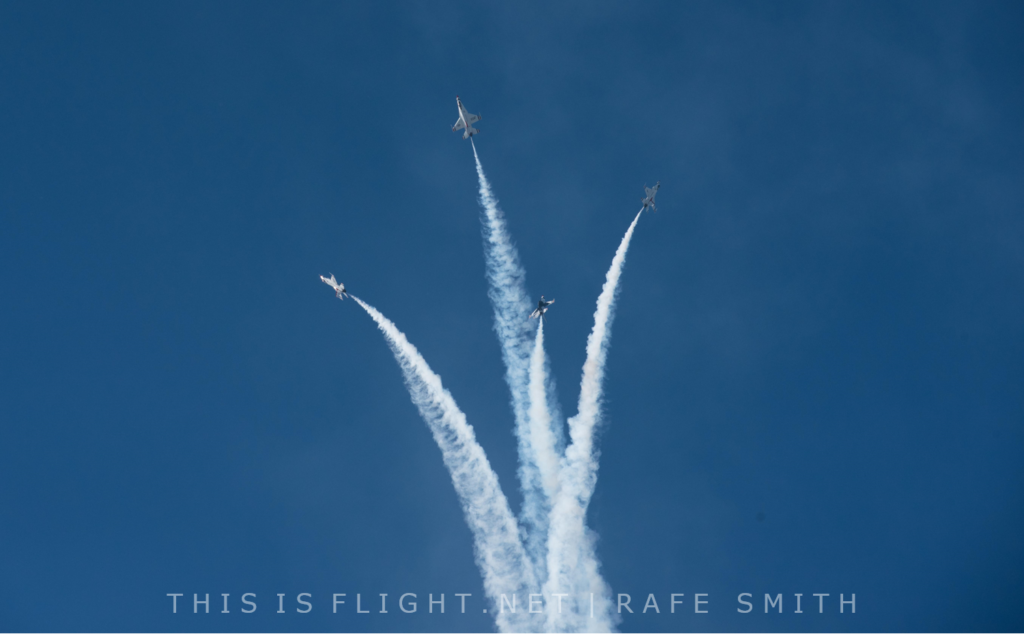 Water was very plentiful with medics in golf carts circling to provide free refills for your water bottle. Additionally, there were vendors aplenty with all manner of food and other items. The size of the ramp area swallowed the crowd very nicely, and on balance the operations folks had their act together. I believe when all is said and done at the end of the air show season, this show will be deemed to have been one of the top airshows in the USA this year. Although there is speculation as to whether the show may return with increased regularity, the last airshow at Maxwell was in 2010, so it may be a while until Maxwell AFB opens it’s doors again; when they do, it is an event not to be missed! 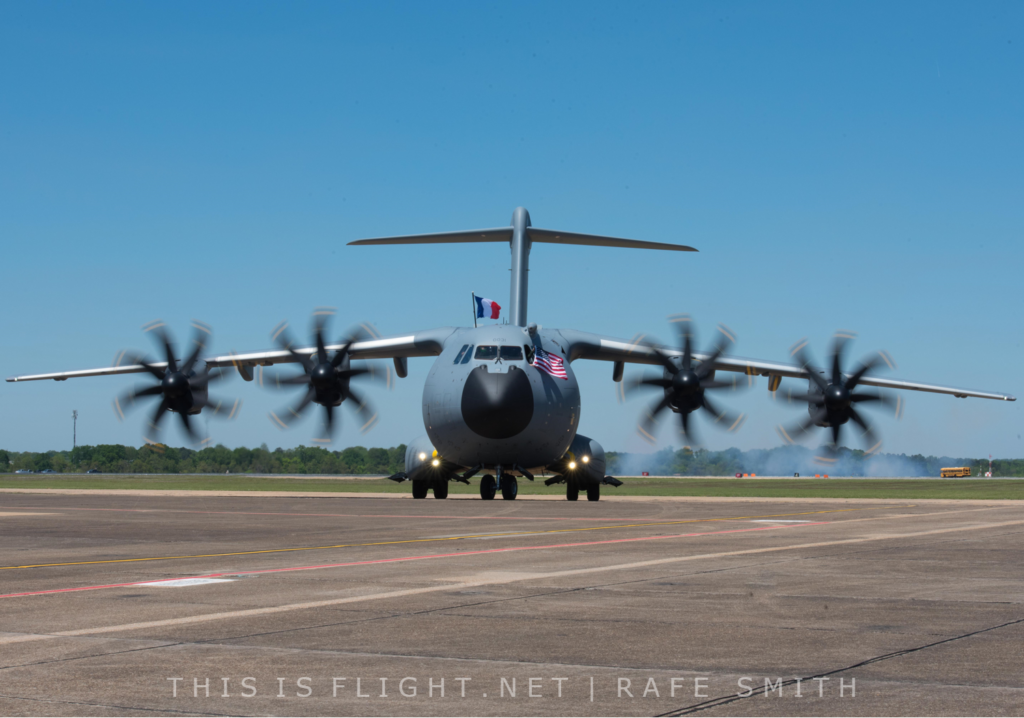