First things first, the name of this show may be a little misleading. It was not really an international show – although there was a performance by a CF-18 Canadian Hornet – but the name of the airport is Chennault International. We attended the Sunday show which was the only day that had a nearly complete line-up (Julie Clark in the T-6 Texan had to scratch due to mechanical problems). Friday night’s show had been cancelled and Saturday was shortened due to severe weather, but Sunday benefited from nearly perfect weather for the show: clear and cool with just a slight breeze. 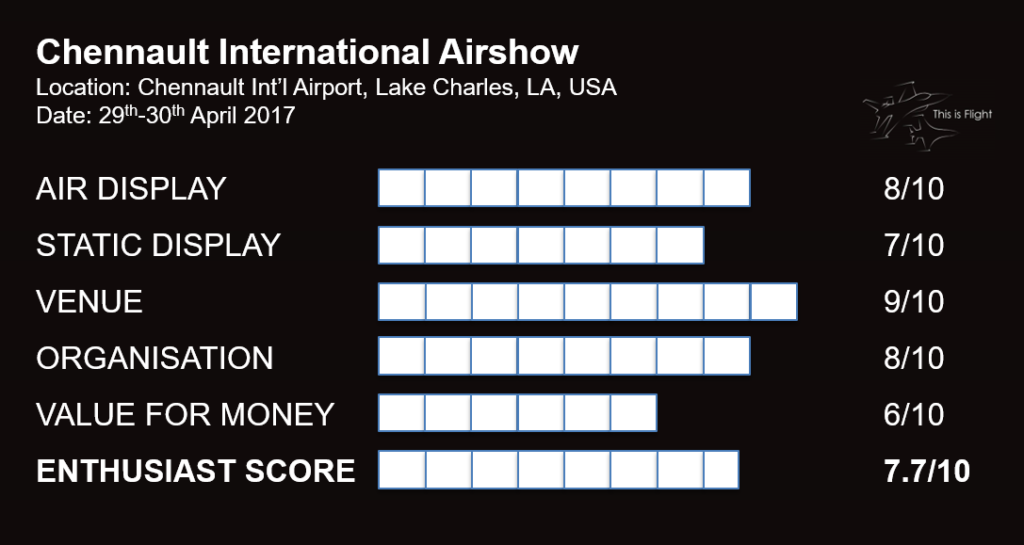 Despite the great weather it seemed to me that the crowd was a bit thin, but this may have been due to the price of admission ($19-$22 for 13 years and older). Since there are several military bases within a few hours’ drive that have free airshows, this show tends to draw fewer casual attendees. 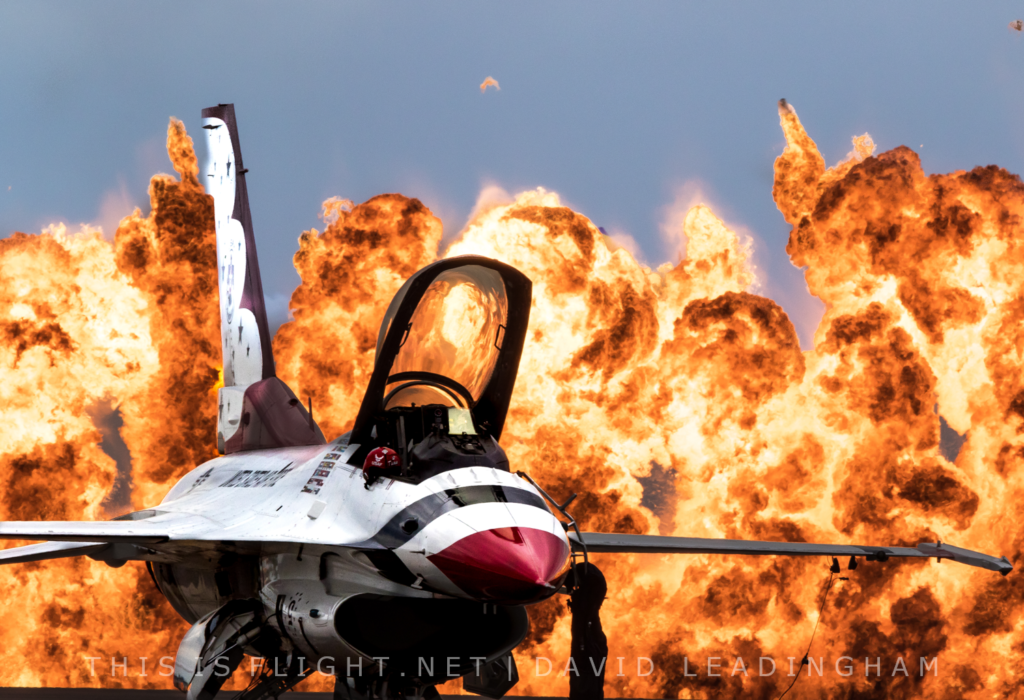 For a show at a civilian airfield, there were a decent number of participant military aircraft, both in flying and static displays. The static displays were arranged in two main areas: the warbirds ramp at one end of the field featured aircraft from WWII, with contemporary aircraft such as a C-130 Hercules, FA-18 Hornet, F-15 Eagle, a Coast Guard MH-65D helicopter and several small civilian and military aircraft at the other end. The layout of the static display was spread out enough to enable everyone to get a good view of the aircraft without feeling too tight. Being a relatively small airport, all areas of the show were easily accessible. 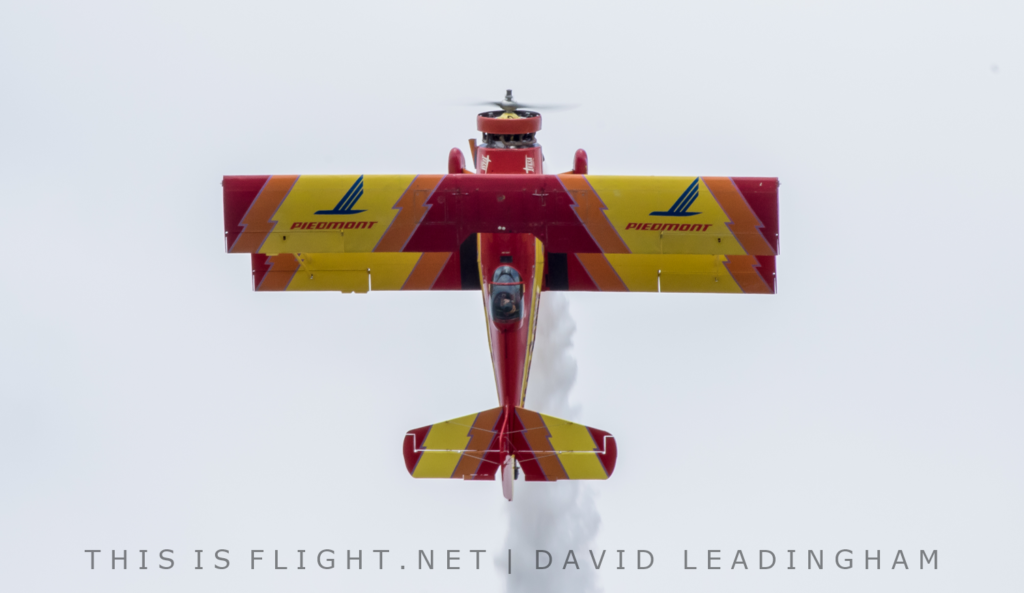 For my taste the show was a little heavy on solo aerobatic performances, with local Kevin Coleman in his Extra 300SHP, Randy Ball in the MiG-17F, Gene Soucy in his modified Grumman Ag Cat, and Matt Younkin in his Beech 18. All of their performances were quite good, but I have a personal preference for team displays, like the Aeroshell Aerobatic Team flying four AT-6 Texans. These guys do similar maneuvers to those of the Thunderbirds, just at a lower speed and with a wonderful engine sound. 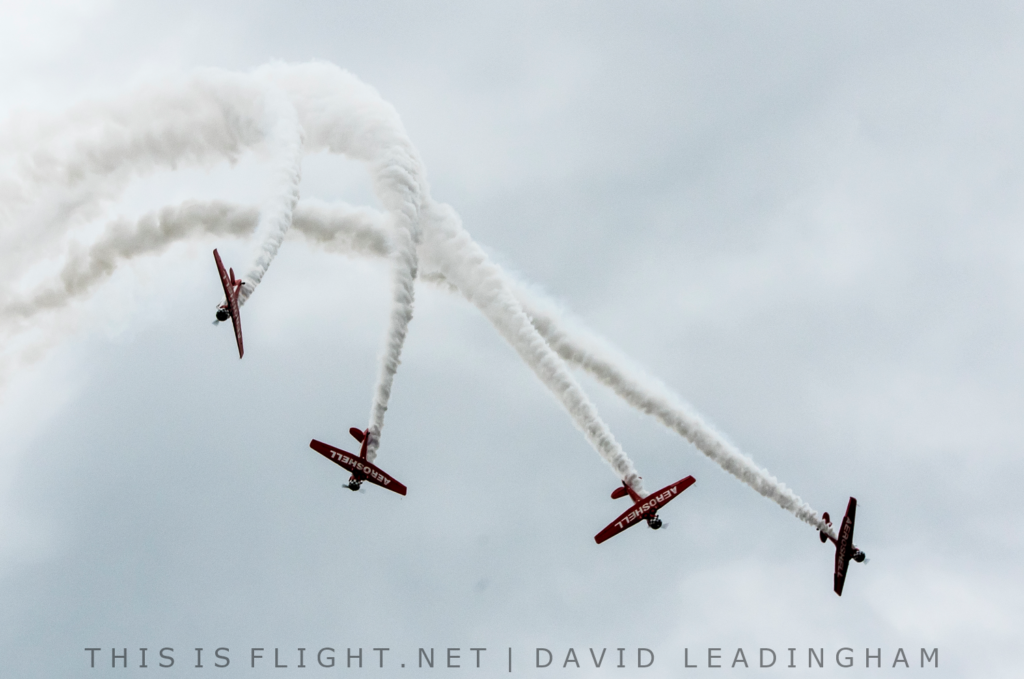 The ‘Commemorative Air Force’ performed with their P-51C Mustang from the Red Tail squadron of the legendary Tuskegee Airmen. This beautifully restored aircraft and the ‘Rise Above’ travelling exhibit, tell the story of these war heroes who broke down barriers while bravely serving their country. The CAF also flew their A-26 Invader “Night Mission” and a B-17G Flying Fortress “Texas Raiders” at the show. The latter has been recognized by Air Classics magazine as the best restored B-17G currently flying. It has been restored to wartime configuration by an entirely volunteer-based group, and is a sight to behold. 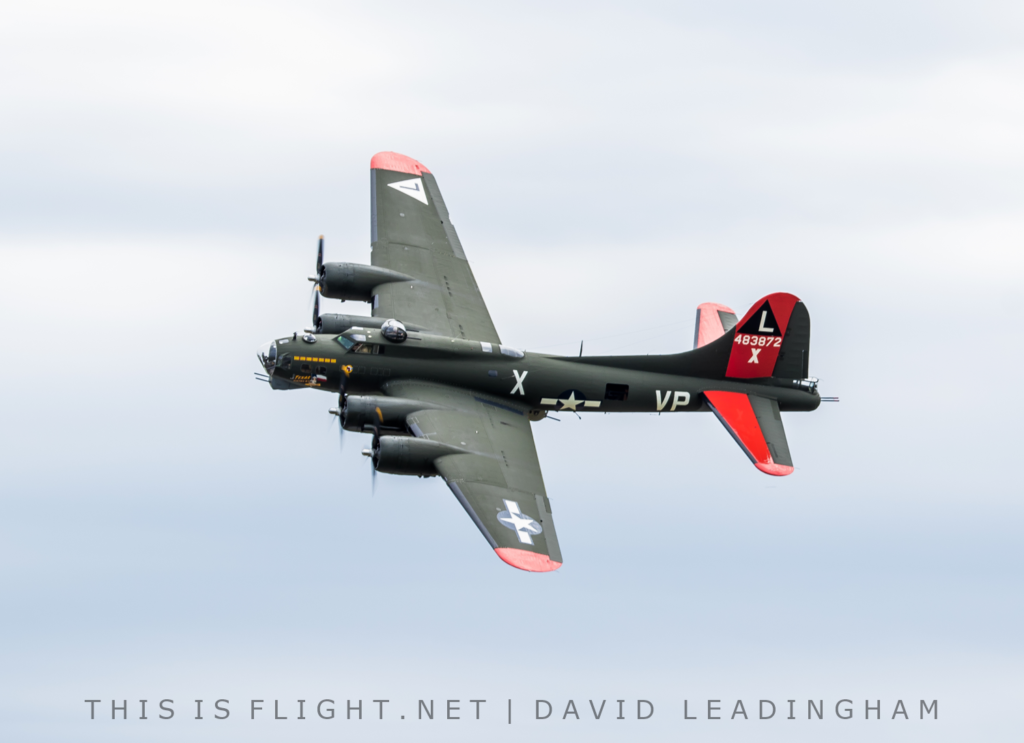 A US Navy F/A-18 Super Hornet and aforementioned RCAF CF-18 Hornet flew separate performances which, again, seemed a little repetitive. Both were good performances, but comprised very similar maneuvers demonstrating the capabilities of the aircraft. Further detracting from the visual spectacle, the Canadian team flew a standard gray Hornet rather than their spectacular specially-painted display jet. 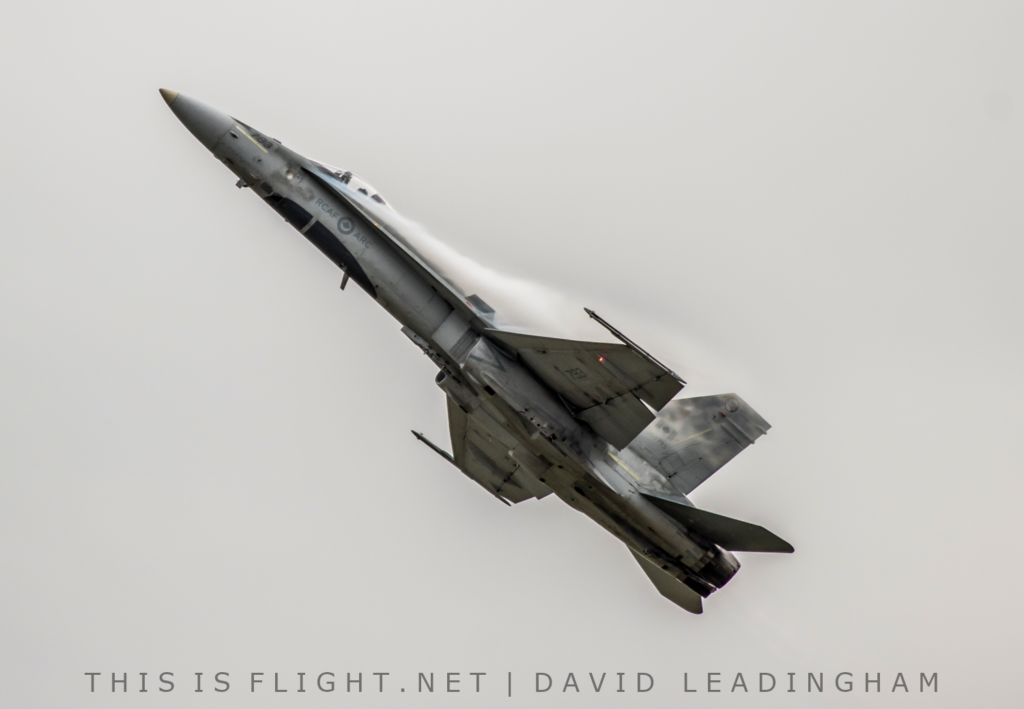 The U.S. Army Golden Knights parachute team did a short demo to drop in both the Canadian and American flags to open the show, and then returned in the early afternoon with their full show. They performed several two man maneuvers requiring the utmost precision and teamwork, followed by a diamond formation of four jumpers just inches apart in free-fall. After the demonstration, they entered the crowd and showed how they repack their chutes, even inviting members of the audience to assist them, all while talking to the crowd about the team and answering questions. 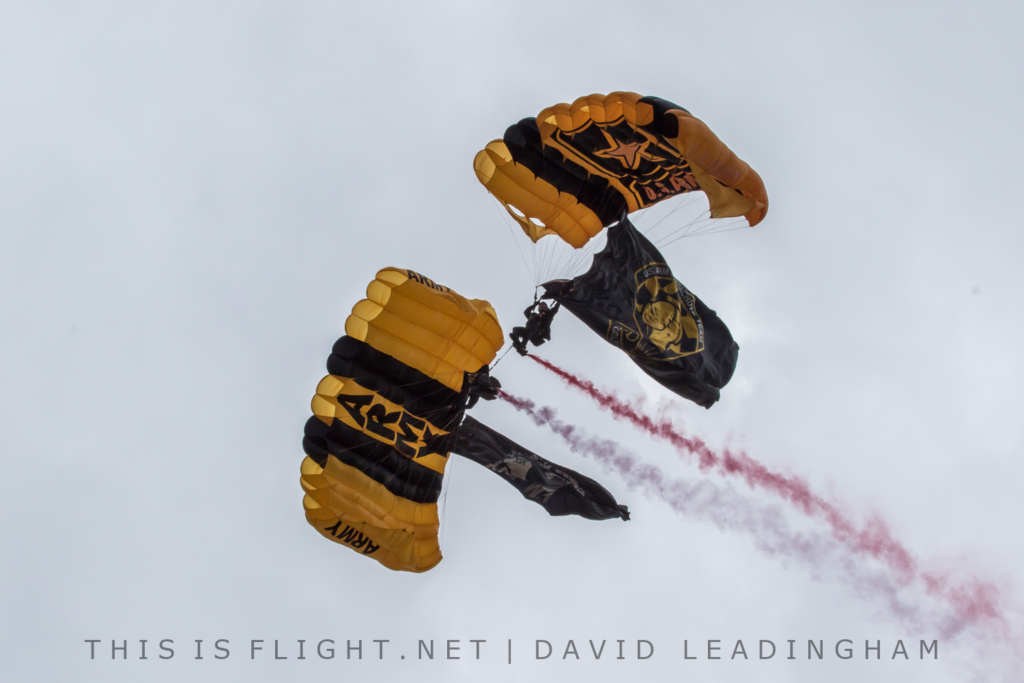 One of the highlights of the show for me was seeing Jerry Conley putting the de Havilland Vampire DH-115 through its paces. Powered by a first-generation jet engine, the Goblin 35B, this aircraft flew in active service from 1946 until 1990, when it ended its military career with the Swiss Air Force as a jet trainer. The unusual twin-boom design of the aircraft so common in de Havilland’s most famous fighters, and its maneuverability, makes for an eye-catching display. This was the first time I have seen one flying so for me it was a treat. 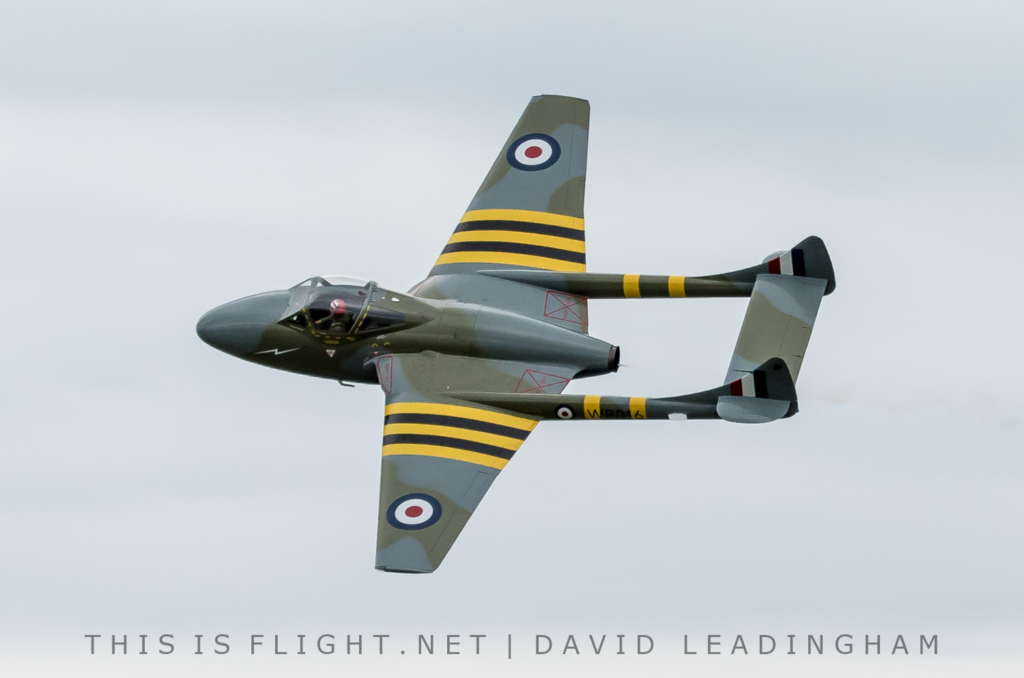 While I’m not a big fan of the Shockwave Jet Truck, it is a favorite of kids in the audience and it did afford Dave Leadingham a lucky photo of one of the Thunderbirds jets with the “wall of fire” as a backdrop! The Thunderbirds, also known as America’s Ambassadors in Blue, were the show’s headline act. Their show is designed to demonstrate the capabilities of the F-16, as well as the talents of the pilots who fly them. 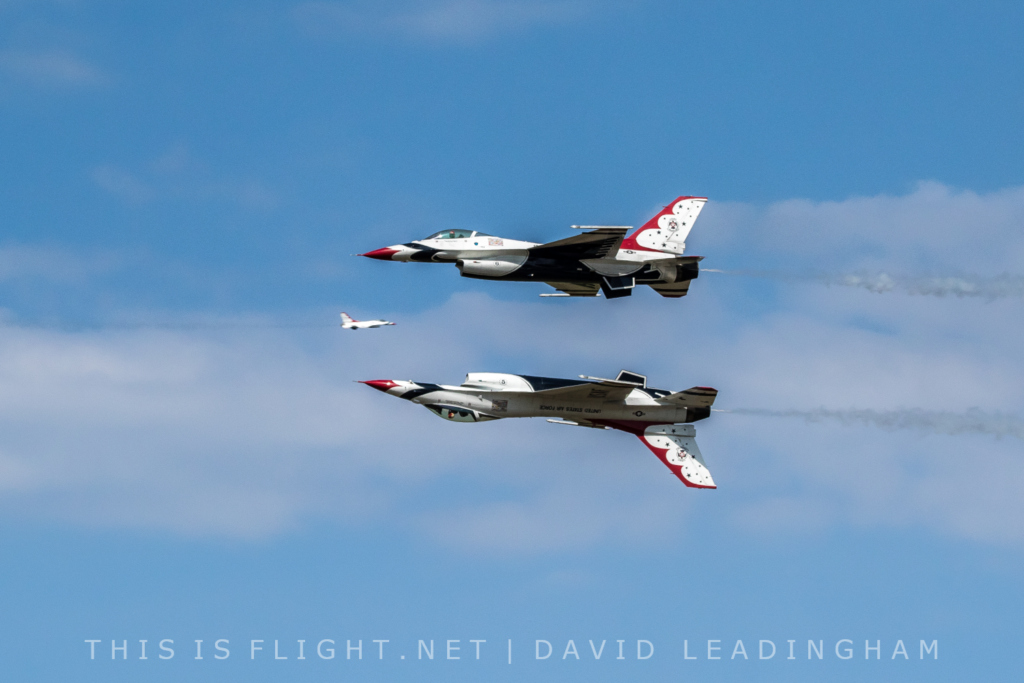 The unique paint scheme with the blue “thunderbird” on the underside of the mostly white planes makes the knife edge and slow pass photo favorites. The demonstration is a mix of formation flying and solo routines, including a sneak attack where the four-man diamond formation draws the attention of the crowd while one of the solo pilots comes in from behind at high speed. This time they changed it to include both solo jets coming from two directions, crossing over the field seconds apart. I have come to anticipate this part of the show, but the second jet definitely came as a surprise!

Overall it was an entertaining show in a comfortable and well-designed venue. It was certainly worth the trip and is one that I would attend again.