The Irish Aviation Authority-sponsored aviation weekend called “Aviation Ireland” gave the general public and enthusiasts alike the chance to see an eclectic mix of aircraft from all ages. The main focus of this article is the Bray Air Display, which ran during the 22nd-23rd July, while a second event in Foynes on the Saturday only shared much the same selection of aircraft. 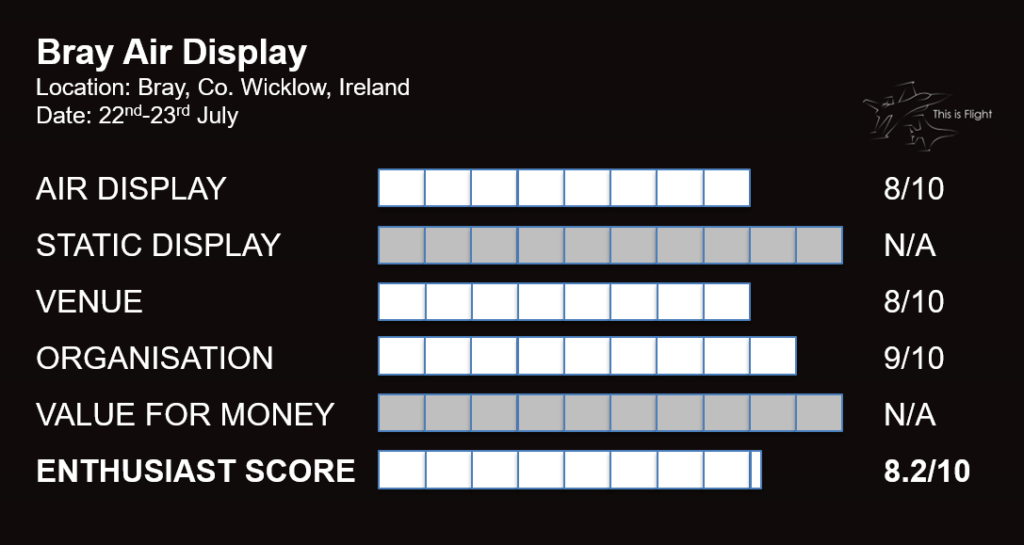 While 2017 lacked the bigger aerobatic teams such as the Frecce Tricolori, who appeared in 2016, and the Patrouille Suisse one year previously, it still attracted a varied lineup of aircraft from across Europe. As is the trend at many seaside shows, the displays were also noticeable distant, although the Sunday show used a much improved crowdline and tighter schedule with very few gaps. 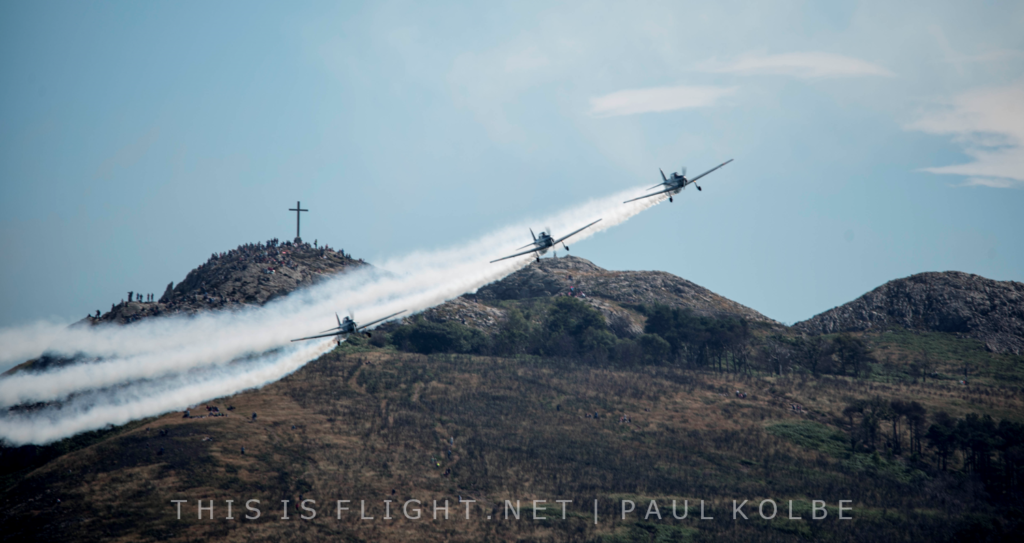 After the Irish Parachute Club opened the show, the Seafire – a return visitor from last year’s show – appeared in formation with its Griffon-powered clipped-wing Spitfire Mk.XIV brother, with a notable difference between the two distinctive engine sounds. The Irish Historic Flight was in attendance as usual, bringing their smoke-equipped Chipmunks, while their Boeing Stearman made an appearance later in the display. 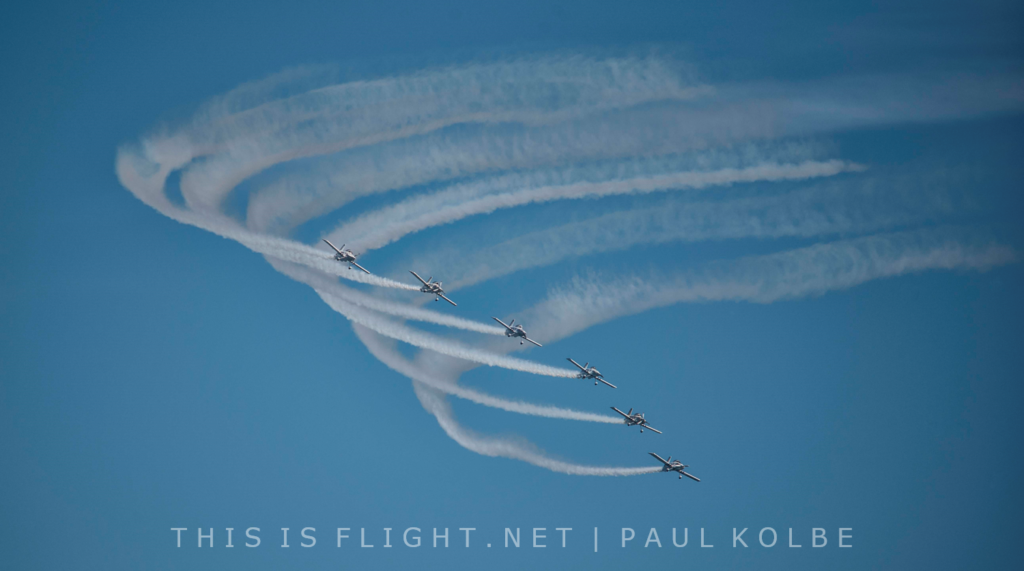 Aerobatic teams were in evidence with Team Raven from Wales taking centre-stage with their new six-ship routine, which was debuted at Bray last year. The sound of four rare Fouga Magister jets belonging to the Patrouille Tranchant also made a welcome return to Irish skies, even taking the time to fly over over U2 concert the night before their display in Bray, emitting the green white and orange of the Irish flag. While the Fouga is not a powerful aircraft, the display is both dynamic and flowing, showing how energy management is all important with a relatively low-powered jet. 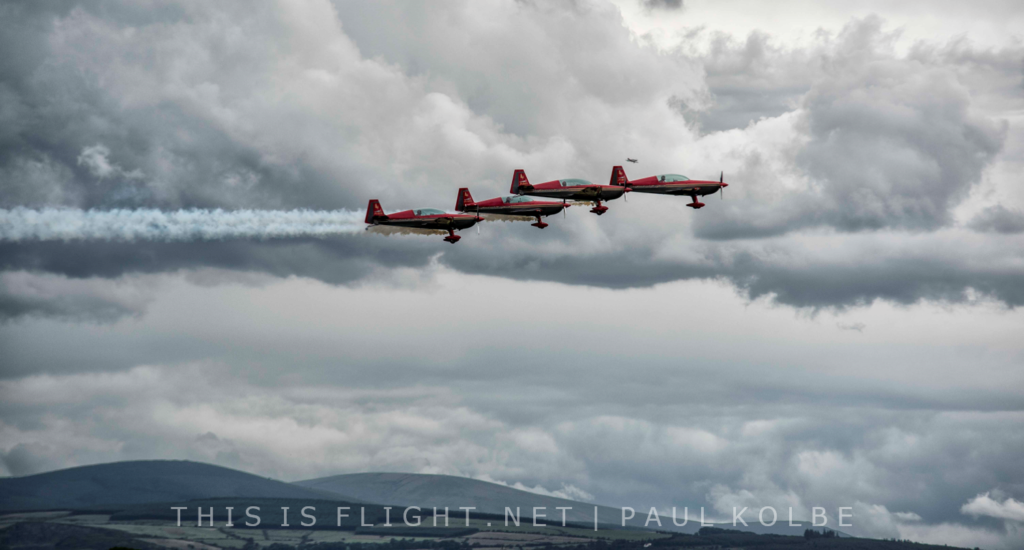 The Royal Jordanian Falcons stopped off at Bray as a part of their annual European tour, having arrived a few days after RIAT in the UK. It was the team’s first appearance in Ireland since the early 1980s, when they still flew the diminutive Pitts S-2A. One Pitts that is still a regular visitor is that of Rich Goodwin; his now trademark knife edge pass always shows the vibrant paint scheme and the unique shape of his beloved aircraft. 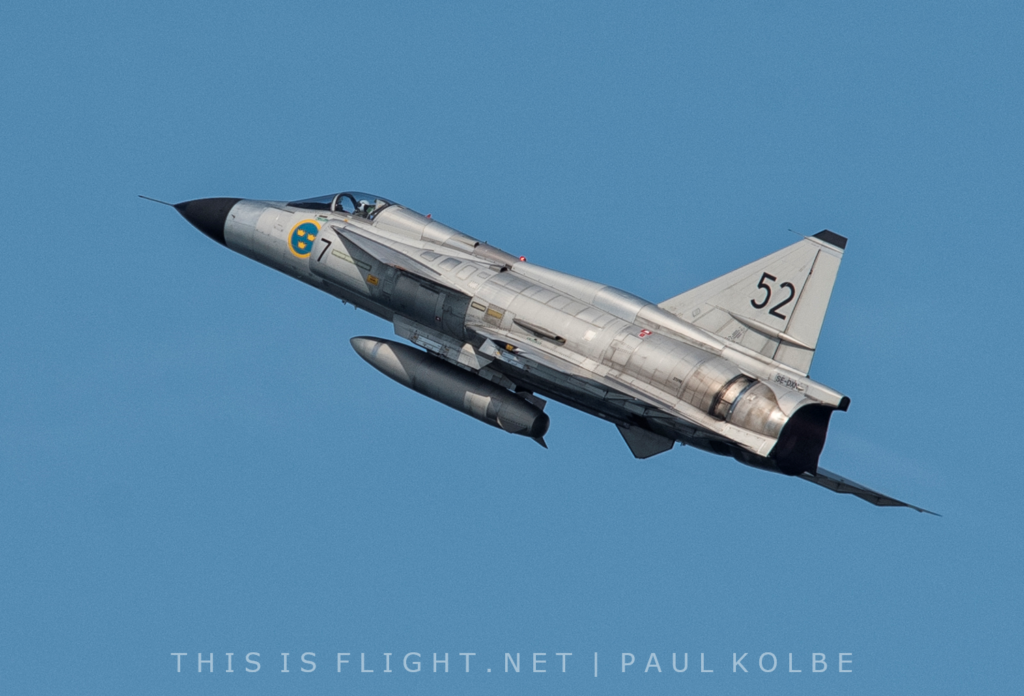 There was classic jet action aplenty, not least from the MiG-15 and Vampire jets of the Norwegian Air Force Historical Squadron, which performed a number of flypasts together. Not to be outdone by their Scandinavian brothers, the Swedish Air Force Historic Flight Saab Viggen made its noisy appearance and made much use of the available flight levels of the display restricted area. Mark Petrie’s Strikemaster Mk.82 made a notable return now flanked by a Jet Provost in a striking blue, white and red scheme, with a dynamic and punchy pairs role demonstration. 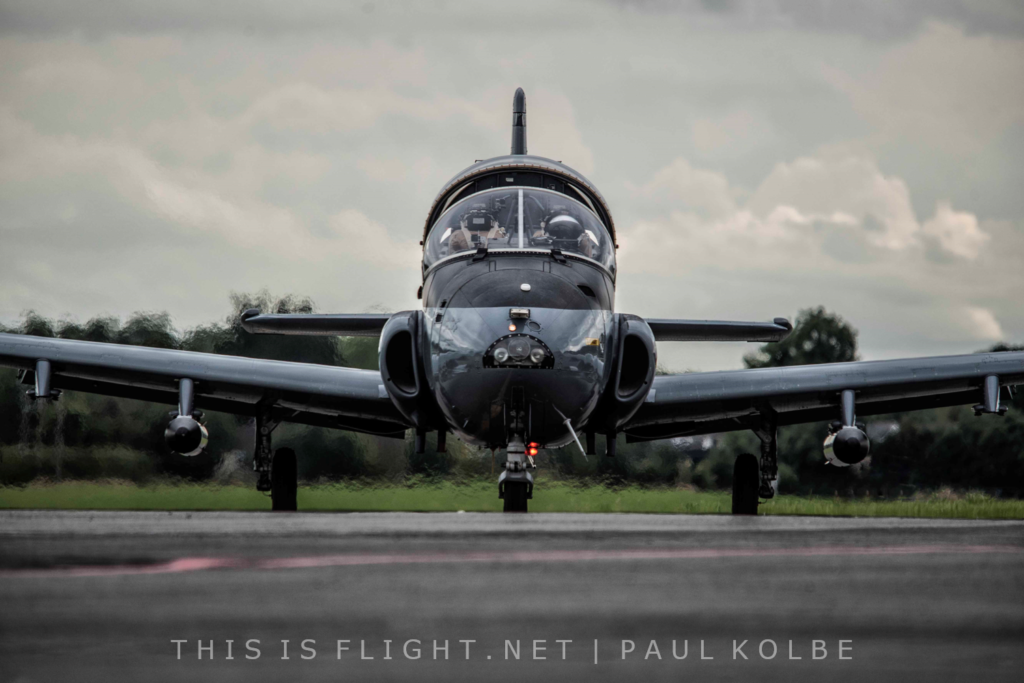 “Miss Pick-up”, the Duxford-based PBY Catalina was certainly was put through its paces over Bray by its Irish Pilot. On the Friday before the show, 93-year-old RAF veteran Ted Jones, who flew the Catalina in active service was honoured with a flight on the aircraft, remarking “we didn’t fly with lights!” The Shamrock of Aer Lingus was in evidence, both from the vintage Douglas DC-3 in an retro Aer Lingus scheme and a more modern Airbus A321. The DC-3 was for many the star of the show, as Capt. Flippie showed the aircaft is indeed quiet agile for its age. The aircraft was built in 1943 and served the USAF, RAF and the SAAF before being retired in 2005; the aircraft is currently based in Germany and is expected to stay in the retro scheme for 5 years. Also notable were displays by the Irish Air Corps, including a four-ship display of PC-9s. 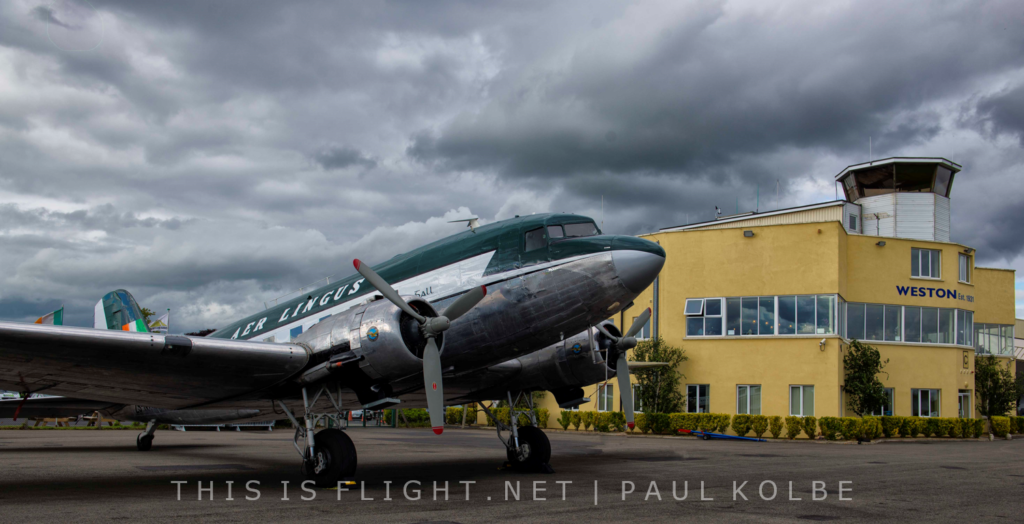 The Spanish Air Force brought some noise in the form of their EF-18 Hornet solo display: the aircraft performed a number of low, and high speed passes, and a number of turns which produced the obligatory fluff (vapour), showing how much moisture was in the air. The two EF-18s and CASA support aircraft were based at Dublin Airport, away from the civilian acts, which were largely based in Weston Airport, with jets flying from Casement Aerodrome. While lacking the spectacle of a major aerobatic team and therefore failing to live up to the lofty standards of 2016, this year’s Bray Air Display was nonetheless an entertaining affair, and one well worth a visit.

Paul Kolbe is a photographer and journalist based in Ireland. He wishes to thank Weston Airport for the access provided during the show.