The Defenders of Liberty show has consistently been a high-quality show, but this year exceeded my expectations. The flying display was jam-packed with little or no down-time between acts and a good mix of aerobatics, warbirds, contemporary aircraft and parachute displays, headlined by the US Navy Blue Angels and a collection of bombers, both old and new. Static displays were grouped by type and included helicopters, trainers, fighters, bombers and civilian aircraft. Several of the larger aircraft were open for tours and most had personnel nearby to answer questions and share information. The only fault I found with the show was that the sound system did not seem up to the task; we were positioned at show center directly between two speakers and it was hard to hear much of the commentary. Further back from the flightline the sound was even poorer. 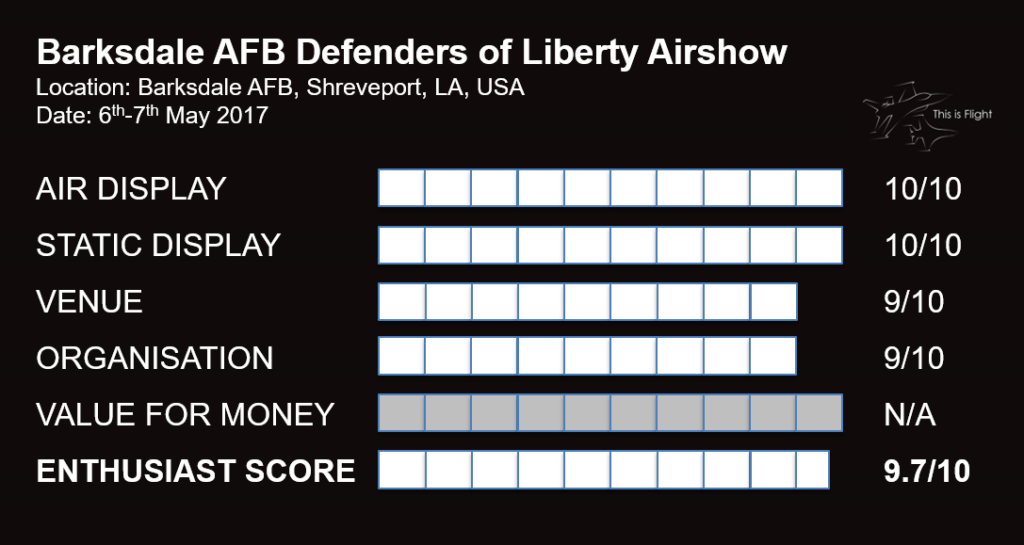 The show opened with the take off of a US Air Force C-17 Globemaster III carrying the Canadian jump team The Skyhawks. As the C-17 climbed to altitude, Kevin Coleman in an Extra 300SHP and Rob Holland in his MXS performed a tandem aerobatic demonstration that they called ‘Two Dudes Aerobatics’. These two have done so many of the same shows that it made sense to finally see them together. 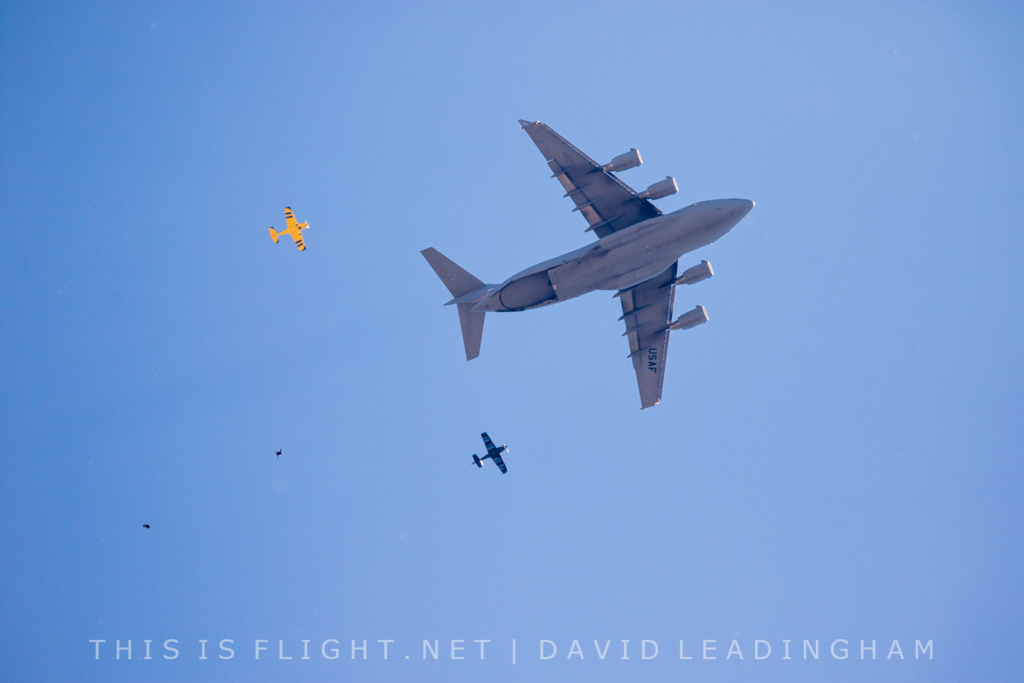 This was quickly followed by three B-52 Stratofortresses (my personal favorite) in an impressive flyby. As Barksdale is known as Bomber Town USA, the B-52 plays a big part in this show. With the Skyhawks now in position, three trios of jumpers left the aircraft to begin their canopy relative work – also known as CReW.

Jeromy Holt was next in his Skybolt. Jeremy is based at Barksdale and flew B-52s; he is now an instructor with the 93rd Bomber Squadron. He made full use of a clear sky and long flightline with a well-choreographed demonstration. Next up was Randy Ball in the MiG-17. His act included a 450 knot high-speed pass, a 360 degree afterburner turn and an impressive inverted roll. Retired colonel Dave Leedom followed in his Pitts S2 showing off the grace and maneuverability of a stalwart aerobatic craft. 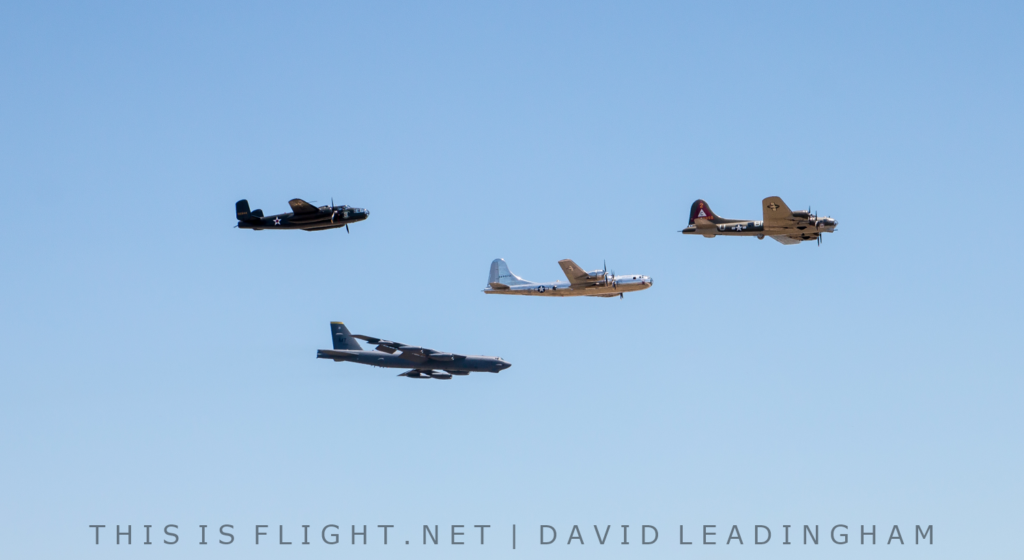 The bomber heritage flypast followed and included a B-52 (of course), a B-17G “Thunderbird”, B-25 “Special Delivery” painted in the color scheme of one if the Dolittle Raiders, and B-29 “Doc”, a beautifully restored Stratofortress. Barksdale was Doc’s first post-restoration airshow, and given the aircraft flew its first operational mission out of Barksdale AFB, this was something of a a homecoming for her. The aircraft was purchased in 2000, after 50 years in “The Boneyard” at Davis-Mathis Air Force Base in Tucson, Arizona, the largest aircraft boneyard in the world. It was built in Wichita, Kansas in 1945, and was fittingly restored there as well. 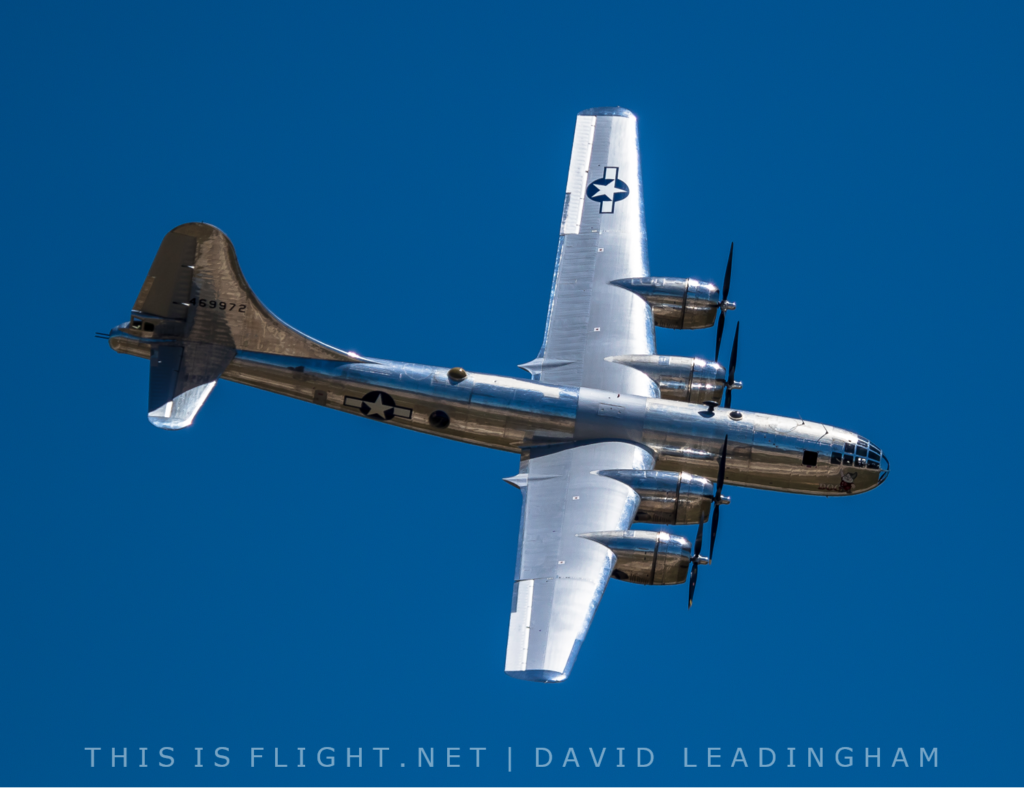 I spoke with Josh Wells, the media spokesperson for Doc’s Friends – the group that rescued and restored the aircraft – about the work that the group did to bring this majestic warbird back to its former glory. He told me that the entire airframe is original and between 90 and 95 percent of the skin is as well. All of the original gauges were also rehabilitated, but this had to be done by a specialty company as there was asbestos removal involved. All of the wiring was replaced, but they used the original housing. The only piece missing is the top gunner’s chair. Known as the barber’s chair it is made of wood, and after 50 years in the dry desert air it is quite fragile. The group is considering building and installing a replica chair in Doc and placing the original on static display. The goal is to be able to provide the most authentic experience possible. Doc is polished to a mirror finish and made a tremendous impression on the crowd, both warbird enthusiasts and newcomers alike. 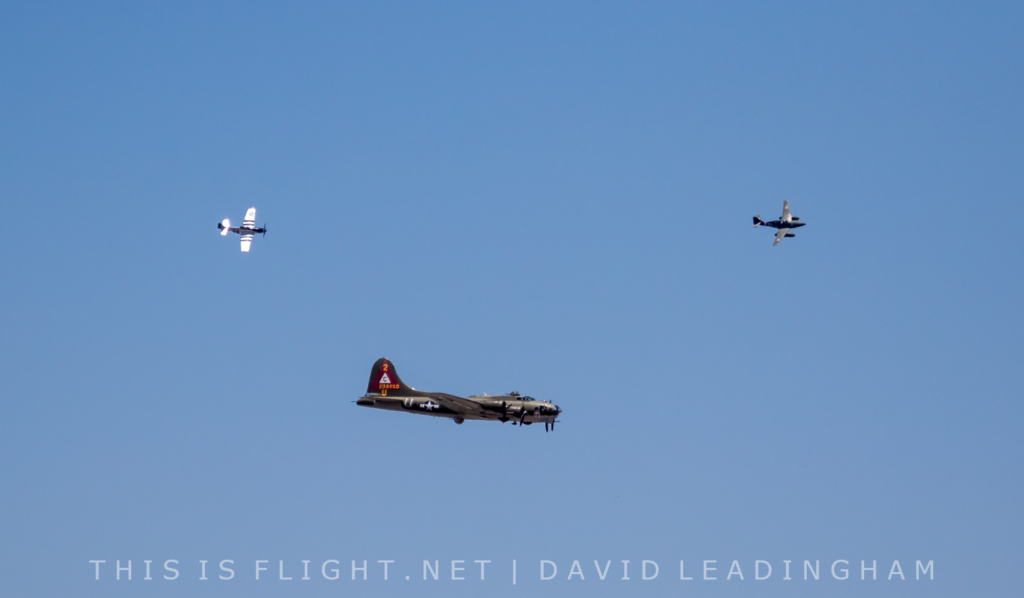 After the flyby the B-25 was joined by an Me 262 and Scooter Yoak in his P-51D Mustang in a re-enactment of the Doolittle Raid on Japan. The Me 262 attacked the bombers before the P-51 swooped in to chase off the aggressor. The Me 262 then performed a rare solo demonstration showing off the maneuverability that made it a formidable foe. The contemporary bombers then returned as another B-52 Stratofortress then paired with a B-1B Lancer in a flypast. As is traditional at Barksdale, they were scheduled to be joined by a B-2 Spirit as well, but the aircraft was not able to make the show on the day that I attended. 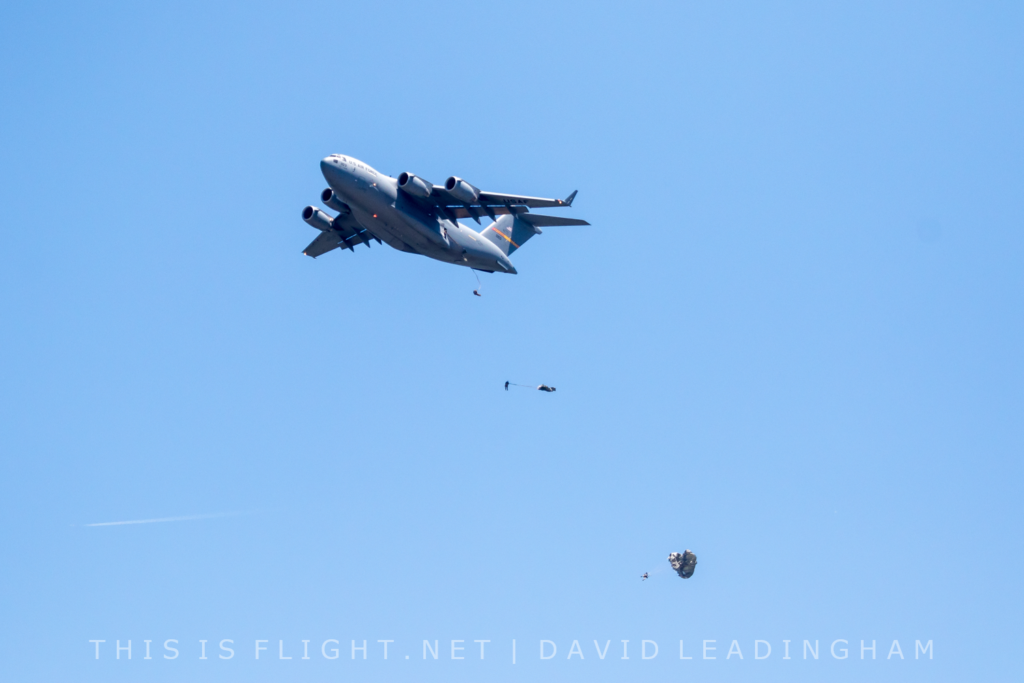 Rob Holland then returned for his solo show. He is a six-time US National Aerobatic Champion, three-time World Aerobatic Champion and seven-time US Freestyle Aerobatic Champion and puts on a fast-paced, jam-packed performance which includes several original maneuvers. The demonstration was so tight it was hard to keep up with everything he did. This was followed by another parachute demonstration in the form of a simulated war scenario featuring a C-17 Globemaster III carrying a contingent of jumpers from the 509th from Fort Polk Army Base (Fort Polk, Louisiana). Once the jumpers were on the ground they used radio communication broadcast to the crowd to call in close air support from yet another B-52. Fittingly, the J-TAC callsign was Cajun. While they were onboard the C-17 one member of the team, Joshua Britton, went through his re-enlistment ceremony. Christopher Vance earned Jump Master qualification with this jump and both were welcomed by the crowd of nearly 50,000 with a standing ovation. 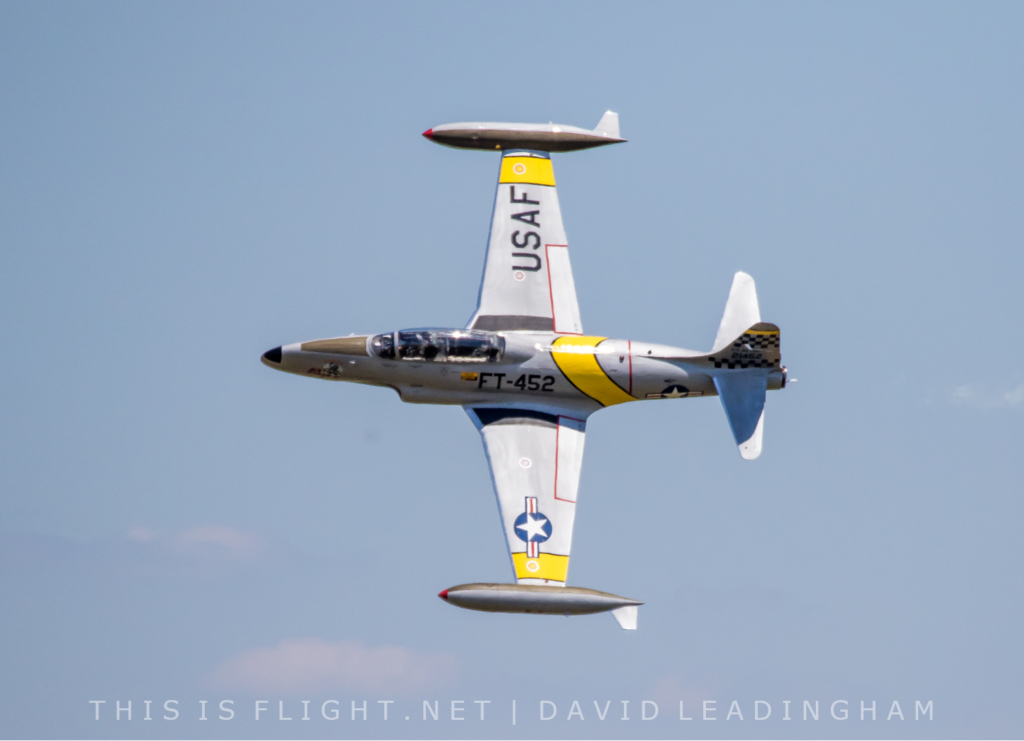 Greg Colyer was originally scheduled for the show, but was replaced by Dale Snodgrass in T-33 “Ace Maker”. He is a retired Navy ‘Top Gun’ pilot and instructor and one of only ten USAF Heritage Flight pilots. He performed his signature move, a climbing spiral, to wrap up a flawless performance. Mike Goulian always delivers a high-quality aerobatic performance and this show was no exception. As a past winner of the Red Bull Air Race in Budapest in 2009, he is known for combining speed and tight maneuvers in a high-speed show. While his announcer (he has his own that comes to his shows) is somewhat over-the-top, the show is a good one. 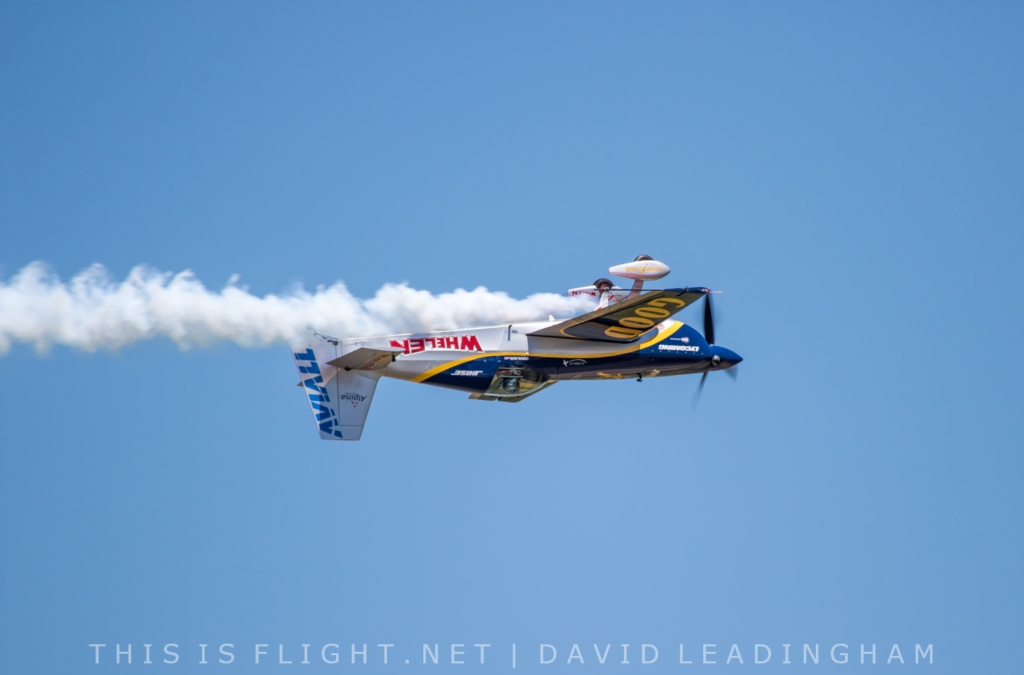 The Canadian Skyhawks returned, this time ferried aloft in a B-17. They are a team comprised of Army, Air Force and Special Forces members known for a signature maneuver called the “Canadian T” which involves two jumpers sitting side by side on the canopy of a third jumper. They closed their show with a smoke-on maneuver called the “Candy Cane” and in a salute to the Louisiana crowd they used purple, gold and green smoke, the colors of Mardi Gras. Kevin Coleman, a Shreveport, Louisiana native then returned to perform his complete solo show. He’s a local favorite and was honored with the slot just preceding the headline act. He made the most of the spotlight with a varied and well-choreographed performance. 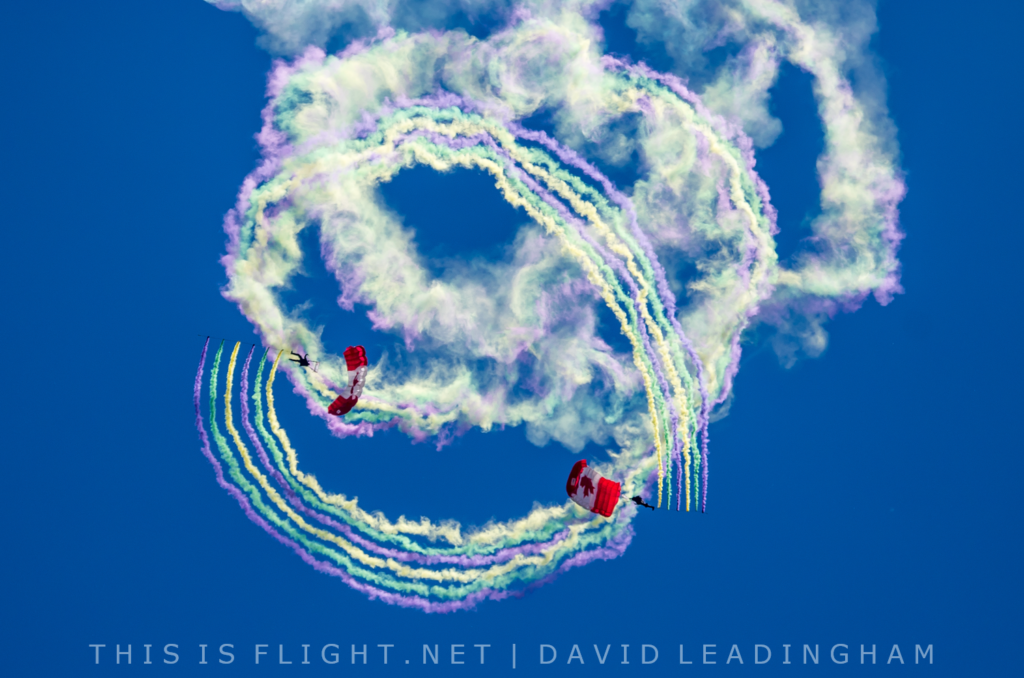 The headliners for the show were the US Navy Flight Demonstration Squadron, the Blue Angels. Their show normally begins with a demonstration by their Marine Corps C-130, affectionately known as “Fat Albert”. I spoke briefly with show narrator, Blue Angel #7 Lt. Brandon Hempler, who told me Fat Albert was out for routine maintenance and would be back in the show line-up in a month. Maintenance was part of the show from start to finish: when we arrived at the base long before the start of the demonstrations, the maintenance crew was hard at work, swarming over the #6 aircraft. They worked for about 45 minutes before firing up the engines which was followed by a triumphant chant from the whole crew for a job well done. The maintenance crew also feature in the Blue Angels’ demonstration with the tightly choreographed pre-flight routine where the maintenance crew that elevates even routine tasks such as the removal of the wheel chocks to a finely timed ballet. 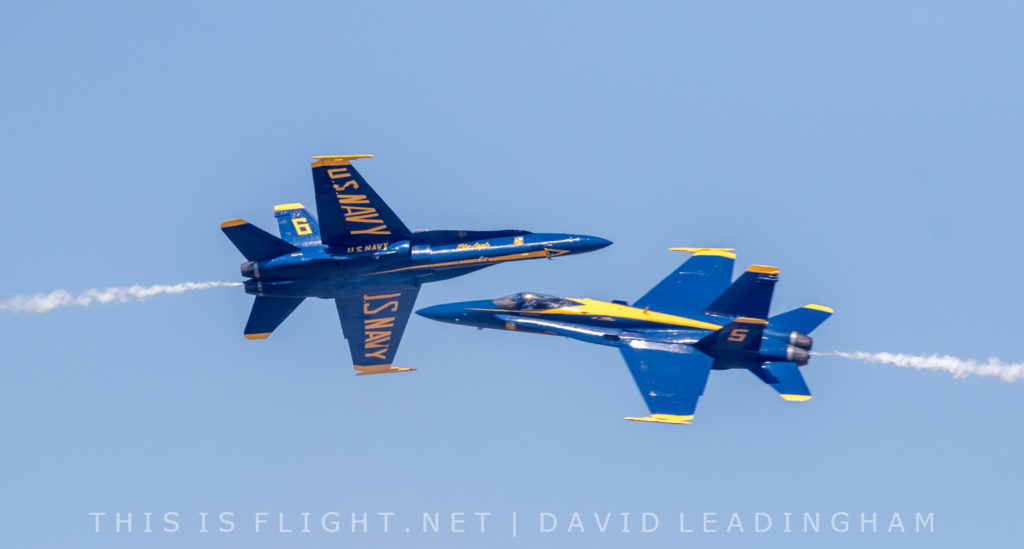 Blue Angels one through four perform the team’s signature Diamond formations, while five and six are designated as solos. The team are performing a new show this year, that includes more tandem and opposing work by the solo pilots. Obviously, the capabilities of the F/A-18s have not changed, but the new routines make the show fresh for those who have had the pleasure of seeing the team perform on multiple occasions. Famous for their ‘maximum closure with minimum separation’, they performed maneuvers such as the Diamond Dirty Loop, the Double Sneak Attack, and my favorite name ever – the Double Farvel which is when the diamond flies with aircraft one and four inverted for the length of the flightline. 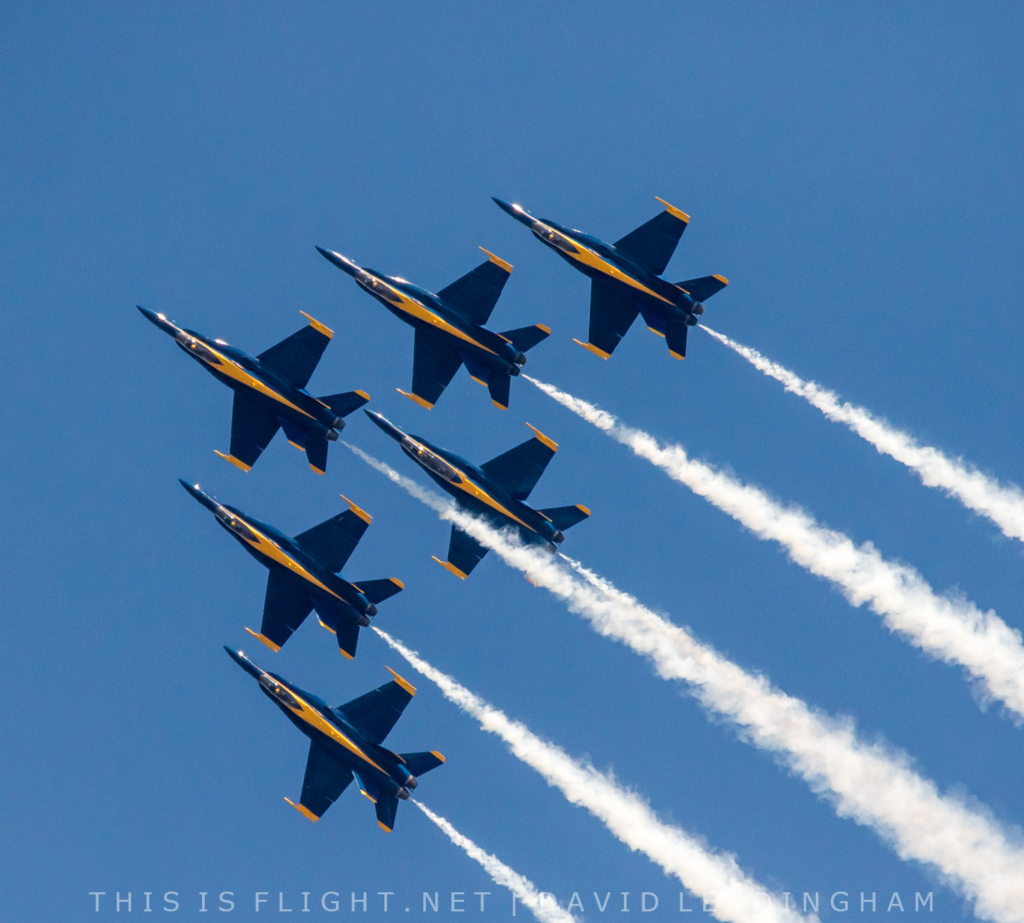 On a side note, I was amused to see a member of the ground crew using a signal mirror to communicate with the pilots; with all of their high-tech equipment, they still utilize a centuries-old technique. At just over 30 minutes into the show, the team performed one of the diamond maneuvers with only three aircraft. I looked away from the formation to see the number four plane landing on the far runway. The performance continued and within ten minutes the pilot had returned in aircraft number seven, a two-seater used as the cameraship during flypasts and for media/VIP flights. He swiftly rejoined the diamond and finished the show. The final maneuver seemed appropriate for Louisiana, The Blue Angel Fleur de Lis. 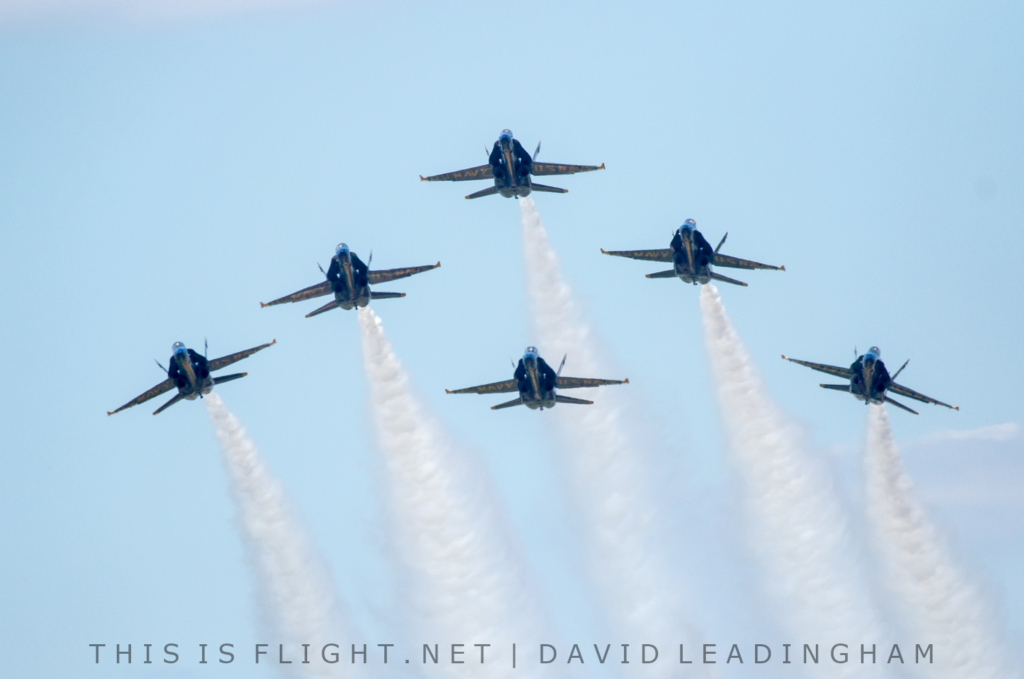 From start to finish this was a well-planned, well-executed and thoroughly enjoyable show. That’s why we keep going back every chance we get.