Not only is H.M.S Heron home to the Fleet Air Arm Lynx and Commando Helicopter Force, but once a year it becomes venue to the Royal Navy’s biggest event – welcoming over 30,000 spectators and enthusiasts to the annual RNAS Yeovilton Air day. Recent years have seen the show grow into one of the UK’s major aviation events, with Yeovilton being renowned for its Commando Assault Finale and Lynx Maritime Role Demo. 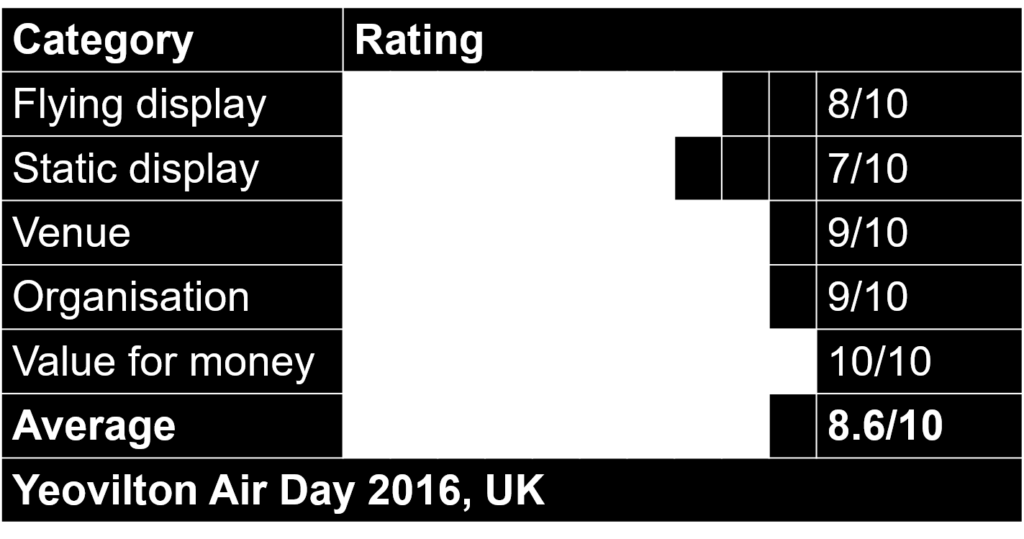 Air Day 2015 certainly marked an end of an era with the show saying farewell to the venerable Westland Sea King HC4 ‘Junglie’. Unfortunately this year also said goodbye to the Lynx HMA8, hence it was rather appropriate to see a four-ship diamond formation of the type being included in the flying programme. However, despite the significance of this flypast, it was evident that it had failed to grasp the crowd’s attention; therefore I would have criticise the organisers’ decision to open the show in such mediocre fashion. 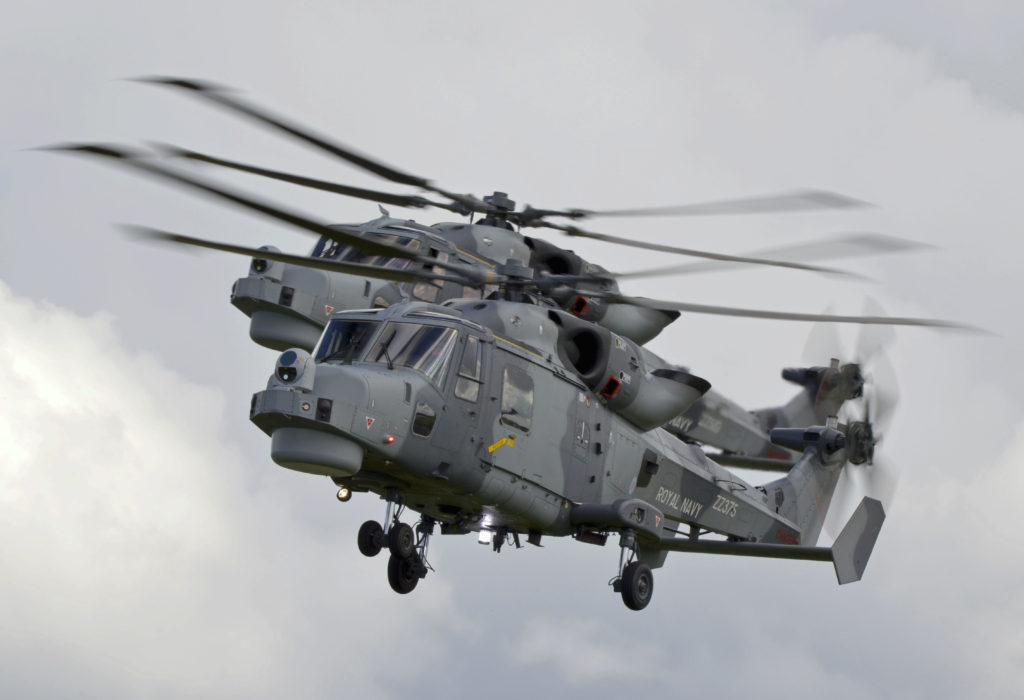 The Black Cats have only recently converted to the Wildcat HMA2s. Photo: James Connolly

Performing at their home event were the Royal Navy’s Black Cats Display Team. The team are now in their second year displaying a pair of Wildcat HMA2s, since transitioning from the Lynx HMA8. Further rotary action was provided by Terry Martin’s Westland Wasp HAS1; and the Army Air Corp’s singleton WAH-64D Apache AH1, which was once again accompanied by pyrotechnics – a common sight at Air Days. Having participated in the static park in recent years, it was great to finally see the Gazelle Squadron in the flying display with their pair of Gazelle HT2s, for only the 2nd time this season. It was an added bonus to see XB627 or ‘Ginger’ being displayed in the colours of the former Royal Navy Sharks display team, which was rather appropriate given the event. 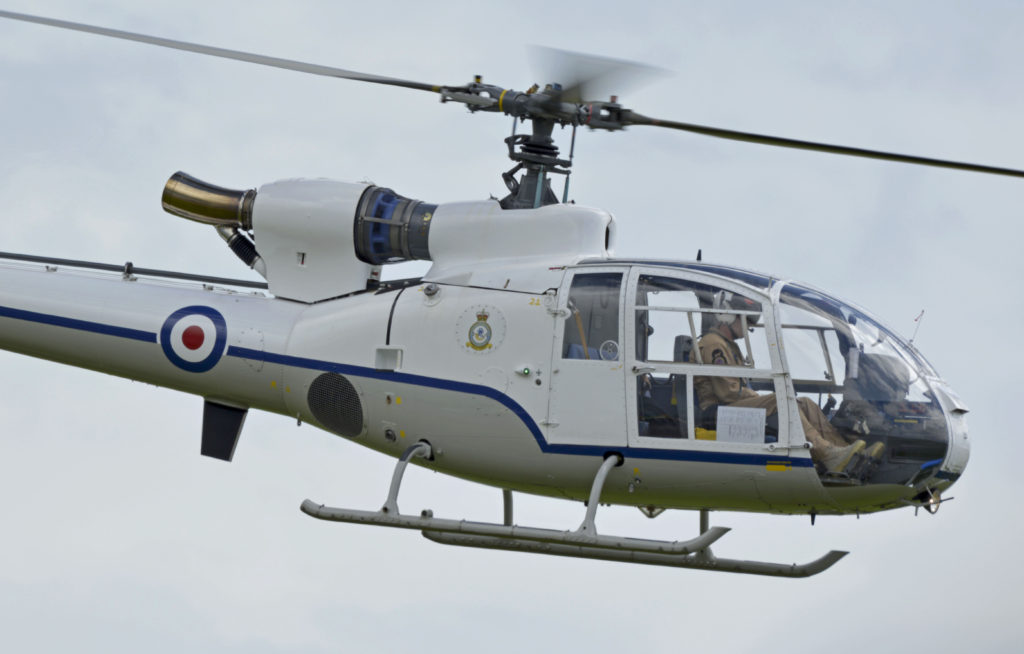 The Gazelle Squadron displayed for only the second time ever at Yeovilton.  Photo: James Connolly

This year saw the debut of the North American OV-10B Bronco, which was sporting its rather vibrant former Luftwaffe markings. Tony De Bruyn’s aircraft has become a regular sight on the UK airshow circuit, with his Bronco making several appearances around the country each year. Coincidentally, the Bronco wasn’t the only aircraft in Baravian Air Force markings at Air Day 2016, with the German Air Force kindly providing both a Panavia Tornado IDS and C-160D Transall for the static display. 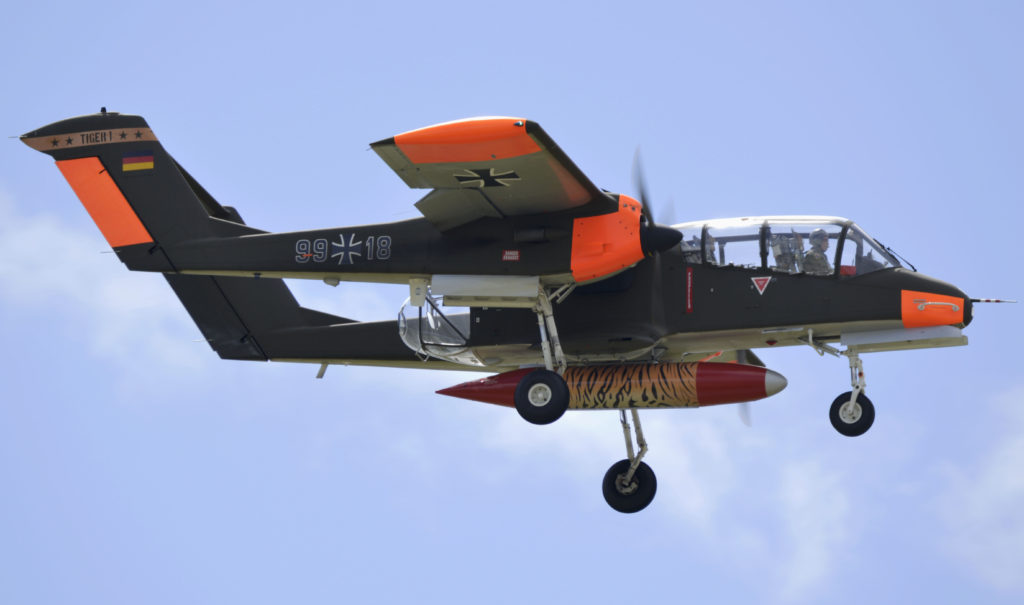 In recent Air Days, enthusiasts have criticised the static line-up due to the positioning of barriers, but more importantly due to a decrease in the number of participants, especially from visiting nations. Despite a noticeable gap left within the static display caused by the late cancellation of the E-3 Sentry, this year was certainly very different with several European nations in attendance including Germany, Belgium and the Netherlands. Amongst the highlights for many were a trio of F-16 Fighting Falcons as well as the returning Boeing C-17A Globemaster III from the 315th Airlift Wing of the U.S Air Force. For a second year running, the crew of the C-17A took home the award for best static participant. 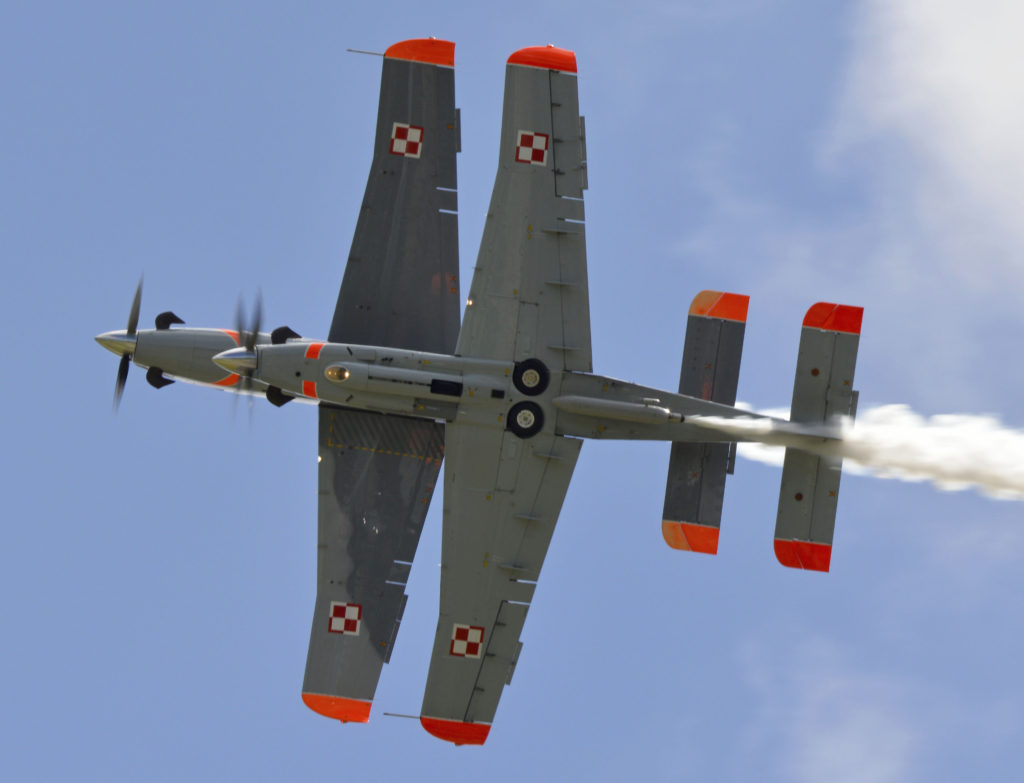 Orlik made their début at this year’s Yeovilton Air Day. Photo: James Connolly

Another debutant for Air Day was the Polish Air Force’s ‘Zespól Akrobacyjny Orlik’ or Team Orlik. Based at Radom, the team currently fly seven PZL-130 Turbo Orliks, and perform several spectacular manoeuvres including a mirror pass. When interviewing the team’s commentator, ppor. pil. Ariel Adamski admitted that “although the Turbo Orlik is easy to operate, close formation flying can be difficult due to the many forces acting on the trainer”. Also in attendance from overseas were the Royal Jordanian Falcons. Unsurprisingly, the team had been rather outshone by Team Orlik. Solo aerobatics were provided by Richard Goodwin in his highly modified Pitts S-2S Special. Returning for a fourth consecutive year, Rich gave an entertaining performance in his rather patriotically schemed aircraft. 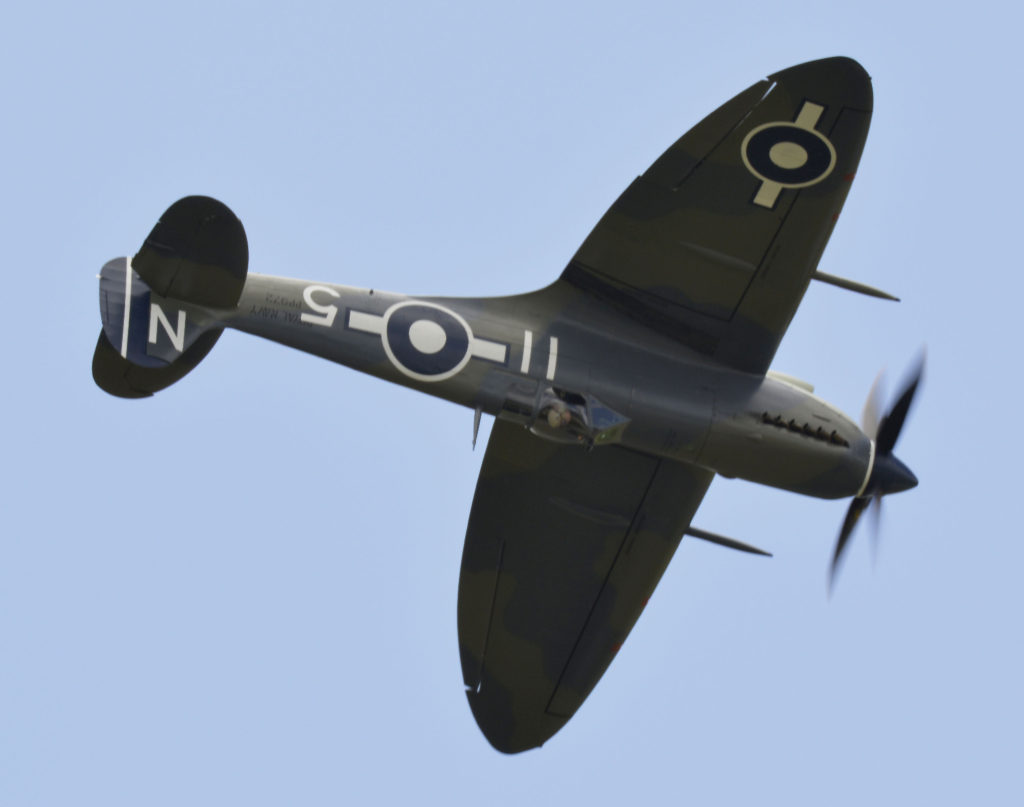 Air Day 2016 also saw the launch of the newly rebranded Navy Wings. Based at Yeovilton, the team operate a variety of historic naval aircraft including the Fairey Swordfish. Coincidentally, this year marked the 75th anniversary of the sinking of the Bismark, in which the aircraft played a major role; therefore this year’s Swordfish display served as a tribute to all the aircrewman that sadly perished on that night, over the Atlantic Ocean. Other warbirds to appear included the Goodyear FG-1D Corsair; the delightfully schemed Supermarine Seafire LF.III; and the Battle of Britain Memorial Flight’s Spitfire XVI and Hurricane IIc pair. 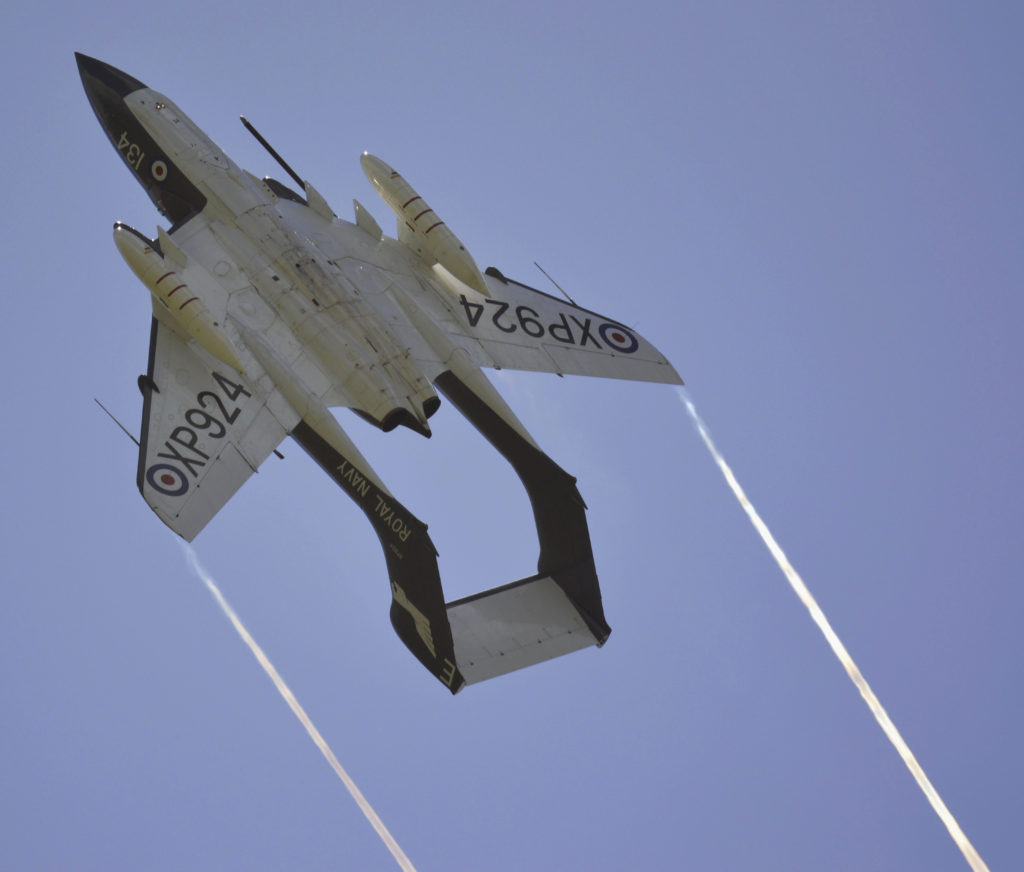 There’s always been a strong presence of classic jets in recent years, whether on the ground or in the air, and this year was no different. Now a regular sight at Air Days, Navy Wing’s de Havilland Sea Vixen was certainly one of the stars of the show, with ‘Foxy Lady’ giving a magnificent low entry. Unfortunately the same couldn’t be said for the commentary, with the commentator describing the horrific scenes of the 1952 Farnborough disaster. Frankly I felt this was rather inappropriate given these current times following the Shoreham disaster. 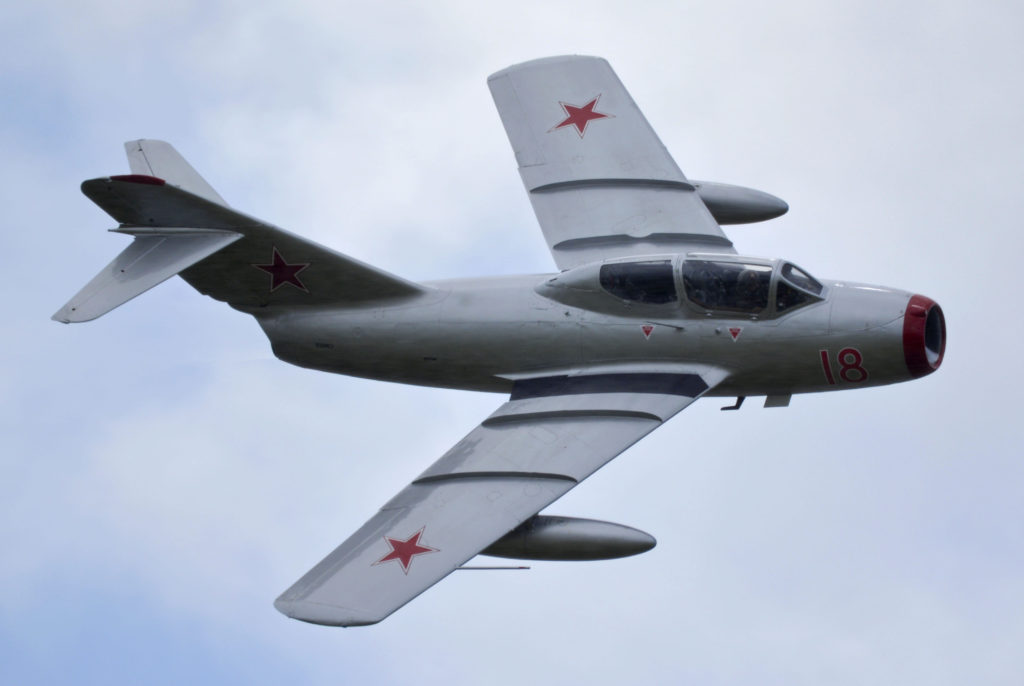 The MiG 15 display is composed of many fantastic topside passes. Photo: James Connolly

Last year unfortunately saw the late cancellation of the Royal Norwegian Historic Flight’s Mig-15UTi, so it was a relief to see the aircraft touch down at the base around a week before the show. Although the ‘Faggot’ is a much quieter aircraft when compared to the likes of the Sea Vixen, the numerous top-side passes certainly made up for it. 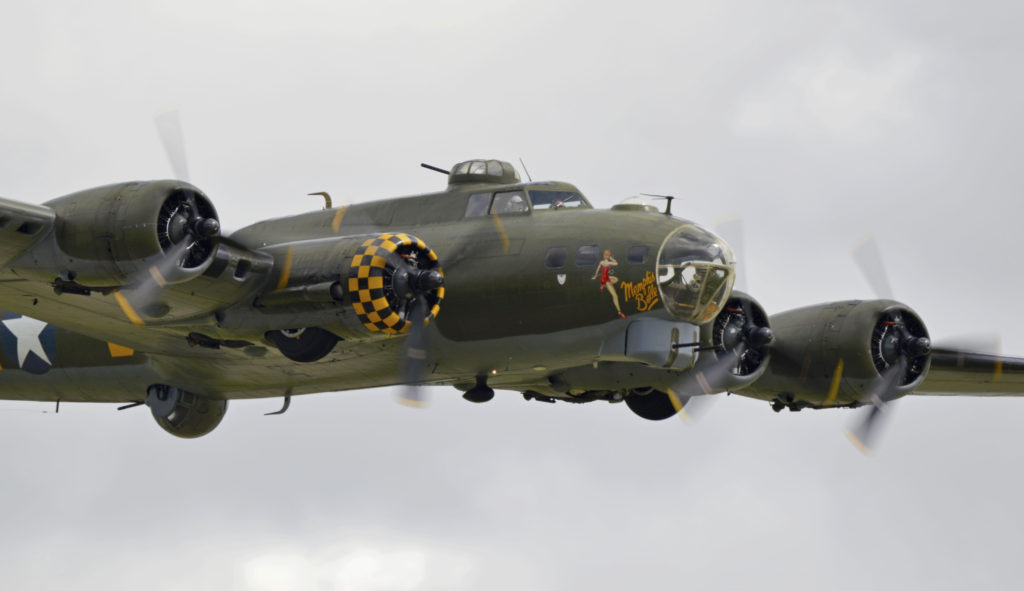 After a lengthy break, ‘Sally B’ returned to Yeovilton this year. Photo: James Connolly

Making an appearance for the first time in 16 years, ‘Sally B’ made a welcome return to Yeovilton. Similar to the Swordfish, the B-17G Flying Fortress is operated as a memorial to the 79,000 Allied airmen killed during WWII. Despite the aircraft understandably having to use a rather large amount of airspace during its display, the aircraft was a magnificent sight in the skies over Somerset. A certain other four-engine bomber by the name of ‘Thumper’ had been scheduled to appear, but was unfortunately unserviceable. 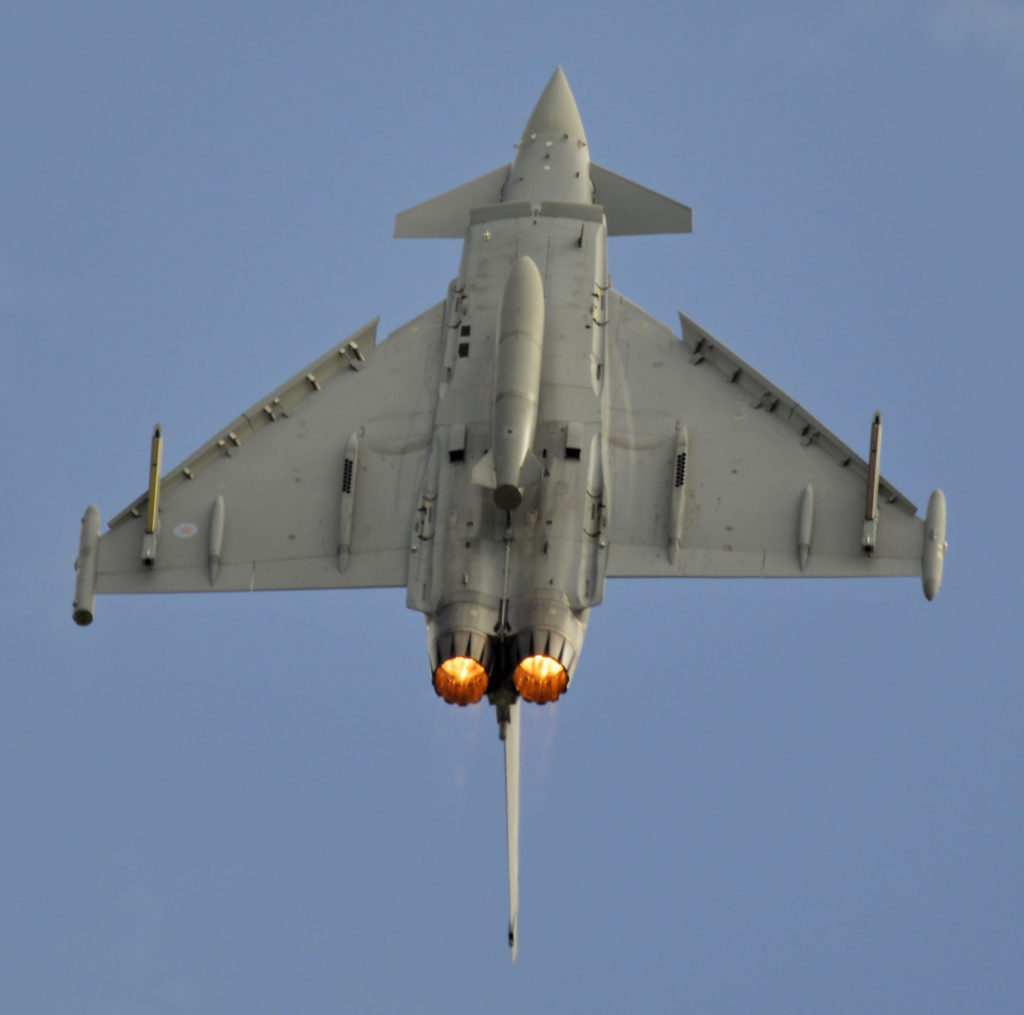 The Typhoon was one of only two RAF displays at Yeovilton this year. Photo: James Connolly

It must be said that Royal Air Force’s contribution to the show in recent years has been rather sparing. This year wasn’t much different with only a Eurofighter Typhoon FGR4, Beechcraft B200 King Air and Shorts Tucano T1 being provided for the static. This year only saw two representatives from the Royal Air Force in the flying programme, with the Red Arrows being the first of the day. This year the team are using their new ‘wall’ formation upon opening their display, over the crowd. Although the manoeuvre lacks the patriotic red, white and blue smoke, it’s certainly a stunning sight to witness. The second of the Royal Air Force’s contribution came from the Eurofighter Typhoon FGR4. Flt Lt Mark Long demonstrated the aircraft’s raw power with several precise and demanding manoeuvres. We’ve certainly seen a major improvement in the RAF’s demonstration of the aircraft over the years. 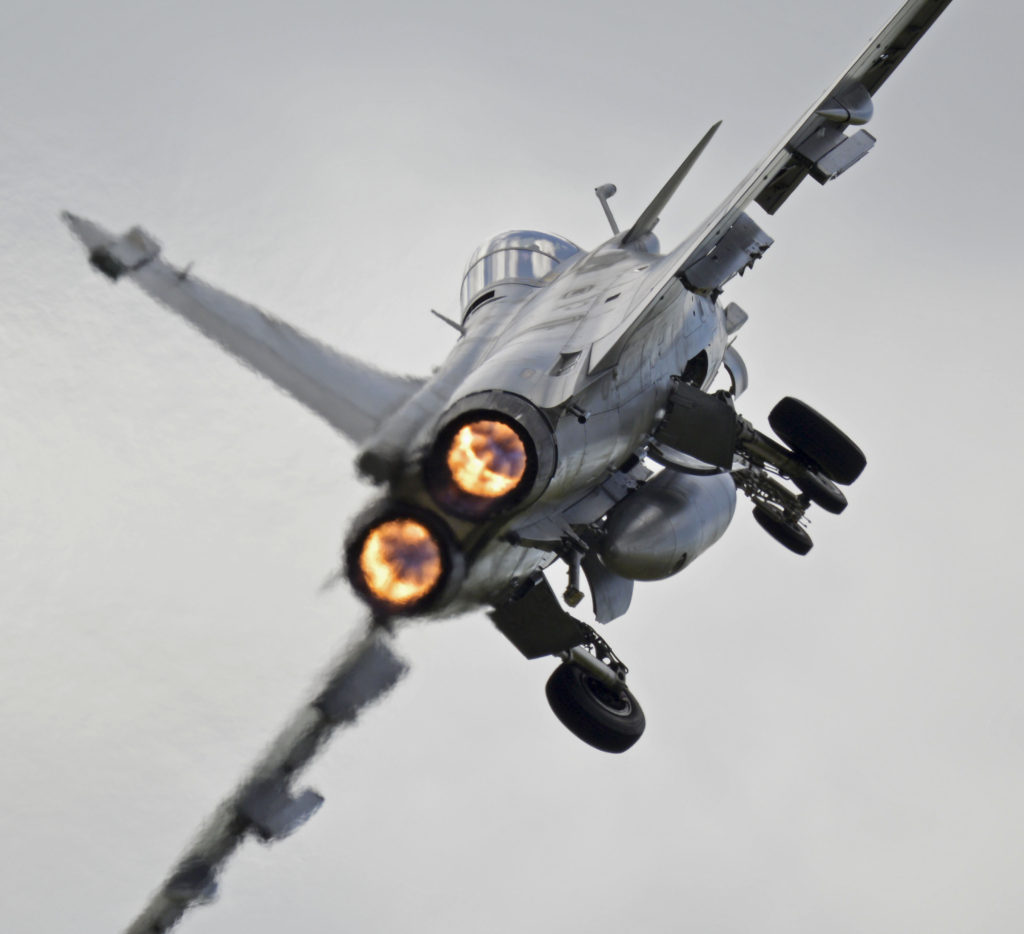 It was the French Aéronavale that stole the show though. The French Navy have always been great supporters of the show, and this year they once again contributed a pair of Rafale Ms to the flying display. Although the display may have been a little shorter than expected, it’s unlikely that you’ll see a better 8 minutes of flying this year. It comes with no surprise that the pilots took home the award for best fixed wing flying demonstration. 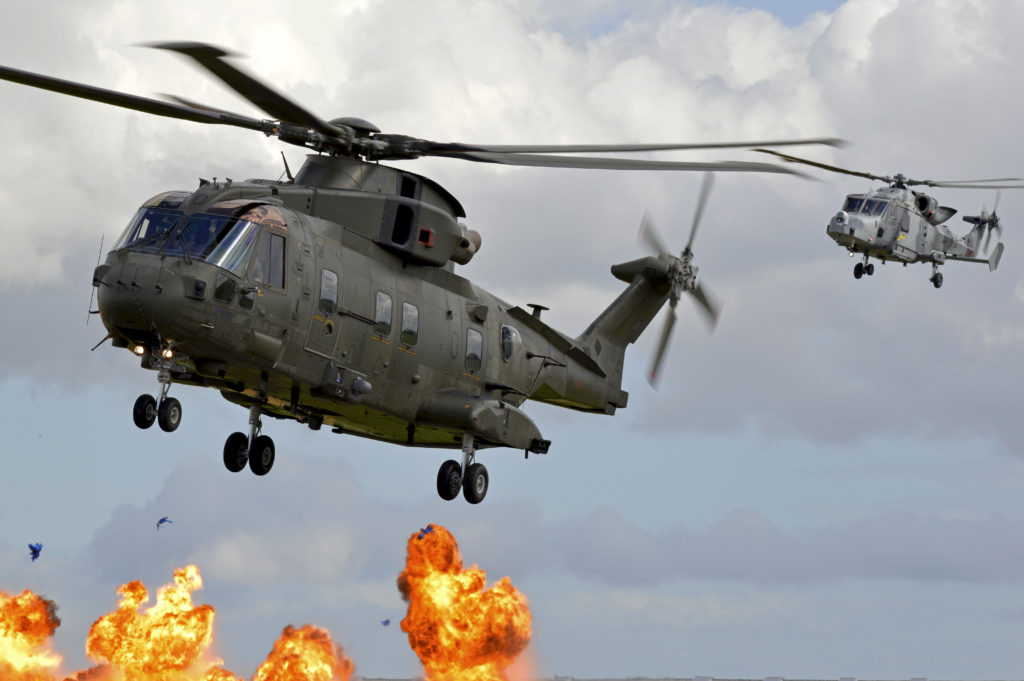 Always a highlight of the season is Yeovilton’s ‘Commando Assault’. Photo: James Connolly

As always, RNAS Yeovilton Air Day closed with its signature climax. The Commando Assault Finale is without doubt one of the most impressive spectacles on the UK airshow scene. The purpose of the Commando Assault Finale is to demonstrate the Royal Navy’s capabilities both on the ground and in the air, and with the Sea King HC4 ‘Junglie’ now out of service, it was down to the Merlin iHC3 to take up the prolific role left behind. The assault certainly epitomises Yeovilton Air Day, with the use of decoy flares and pyrotechnics adding to the excitement. 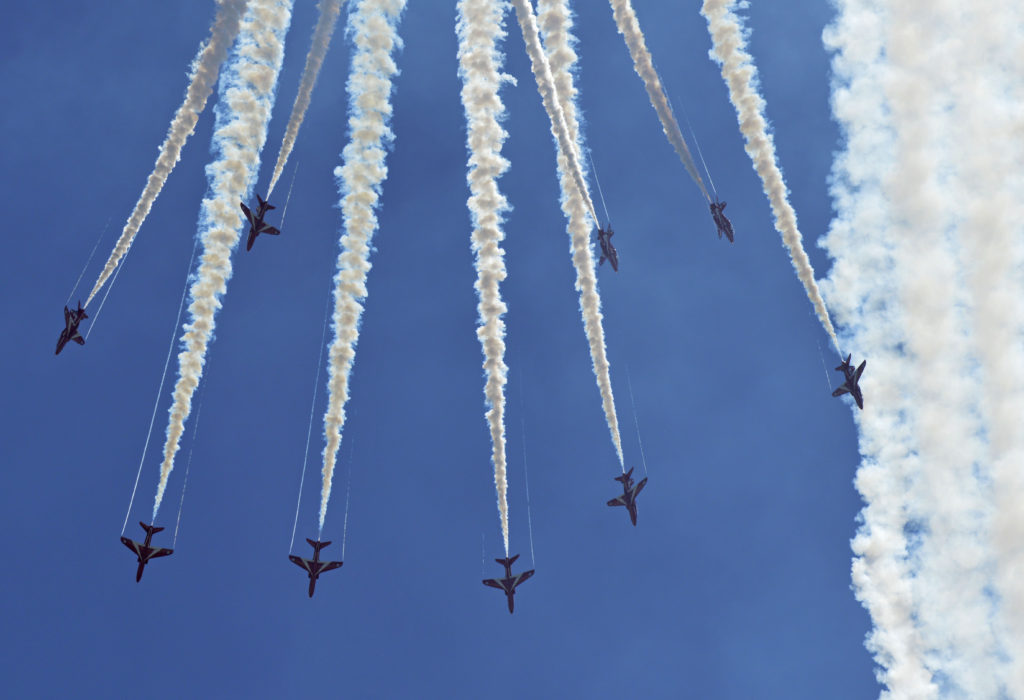 One of the first times this year the Reds have displayed in clear blue skies! Photo: James Connolly

This year’s flying programme may not have reached the standards of Air Day ‘13 and ‘14, but once again RNAS Yeovilton Air Day was an evident success – perhaps with a little help from the fine Somerset weather. Both the Royal Navy and AHA never fail to provide an excellent show, and I sincerely look forward to returning in 2017.