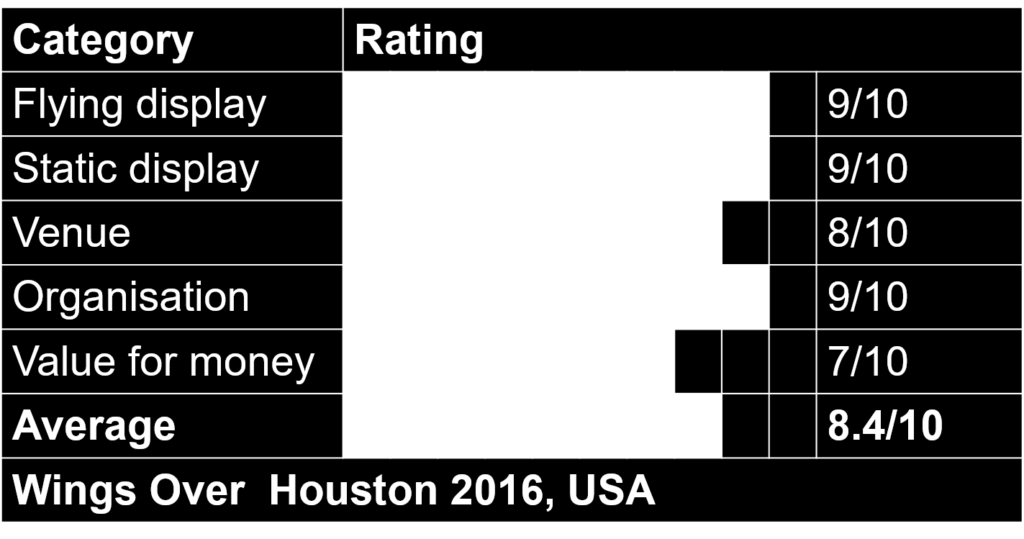 On the days of Oct 20-23, This is Flight once again reported from the Wings Over Houston Airshow at Ellington Field in Houston Texas, now in its 32nd edition. The fun started on Thursday October 20th with arrivals and rehearsals. I reported to show site at 9:00 to prepare for the arrival of the Blue Angels as well as three F-35A Lighting IIs from Luke Air Force Base, Arizona. As I entered the gate, the C-130T from New Orleans that the Blue Angels were using as a Support plane landed. Fat Albert is down for maintenance and so the Blues have borrowed a support aircraft at least until 2017. As the group of journalist was heading to the gate to meet the Blue Angels PAO, we all joked around and enjoyed ourselves as most of us see each other once a year for this show. As we waited for the PAO, a NASA T-38 Talon took off, along with several other aircraft. A P-8A Poseidon from VP-16 War Eagles NAS Jacksonville Florida arrived right before the Blue Angels. Unfortunately for us, the P-8 had only a white tail, with no squadron tail art or code, but due to the humidity and rain, there was at least awesome vapor streaming off the wings on approach. 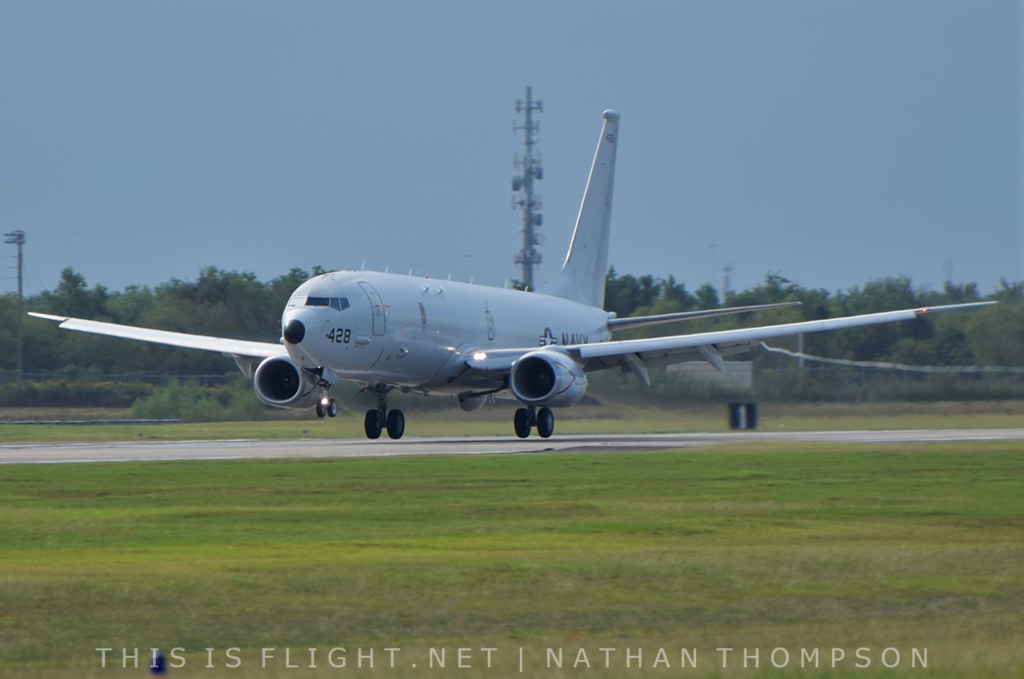 Shortly after, we were introduced to the Blue Angels PA officer before the six Blue Angels display jets arrived about 9:30 in a delta formation before breaking to land. After they shut their engines down, I met Blue Angel #6 Cmdr. Frank Weisser for an interview that was unfortunately a little shortened due to their late arrival. Weisser had been was brought back into the team after Capt. Jeff Kuss was killed in a tragic accident in Tennessee this June. “I’d say the most challenging portion I had was becoming re-acclimated with the aircraft, and then the challenges of the demonstration”, said Weisser. We will feature more of his interview in future features. 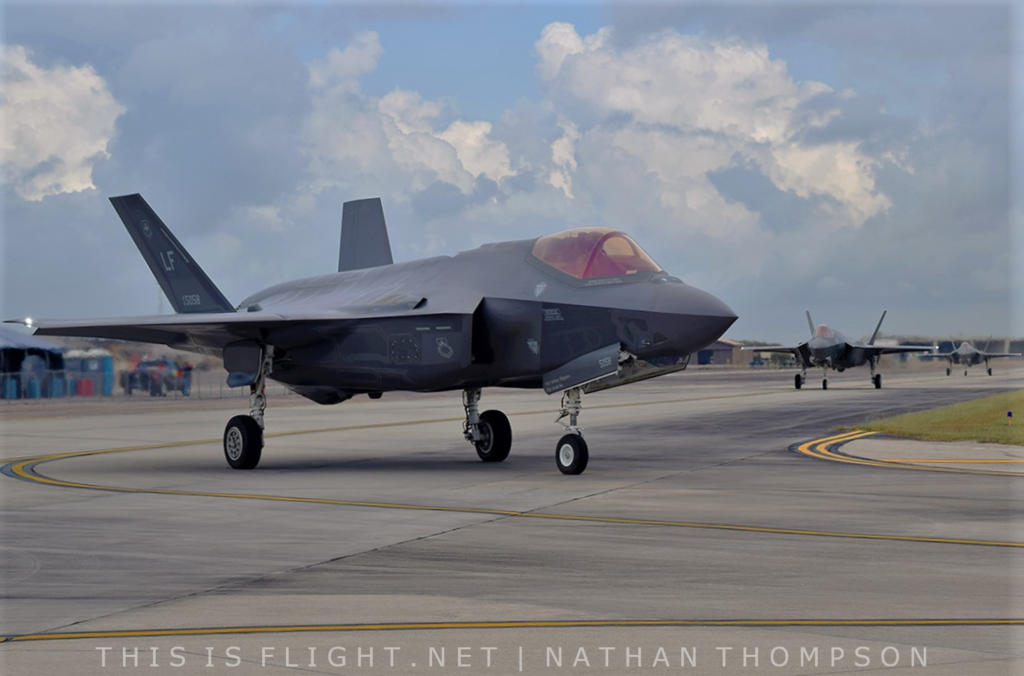 After my Blue Angels interview we were allowed to be out by the taxiway for the F-35 arrivals. Wings Over Houston was fortunate to host three F-35A Lightning IIs from Luke AFB for the weekend with one on static, one flying in the USAF Heritage Flight and one as a spare. The F-35s emerged in an Echelon formation and broke off to land, then they taxied in and two headed off and one turned by us. There was a barricade, but we were still 20 feet from a running F-35 and got some great shots. As with the Blue Angels, there was a chance to speak to the pilots after landing, and the Heritage Pilot was gracious enough to answer all my questions that I had planned to ask. After that it was time to leave the field, but I found a viewing area to watch the Blues do their circle and arrival and also the arrival of a B-52, which landed on the other side of the field. That afternoon it started to clear up, with some of the other static display aircraft and warbirds  taking advantage of the weather window and arriving for the show, as well as a first practice for the Blue Angels. 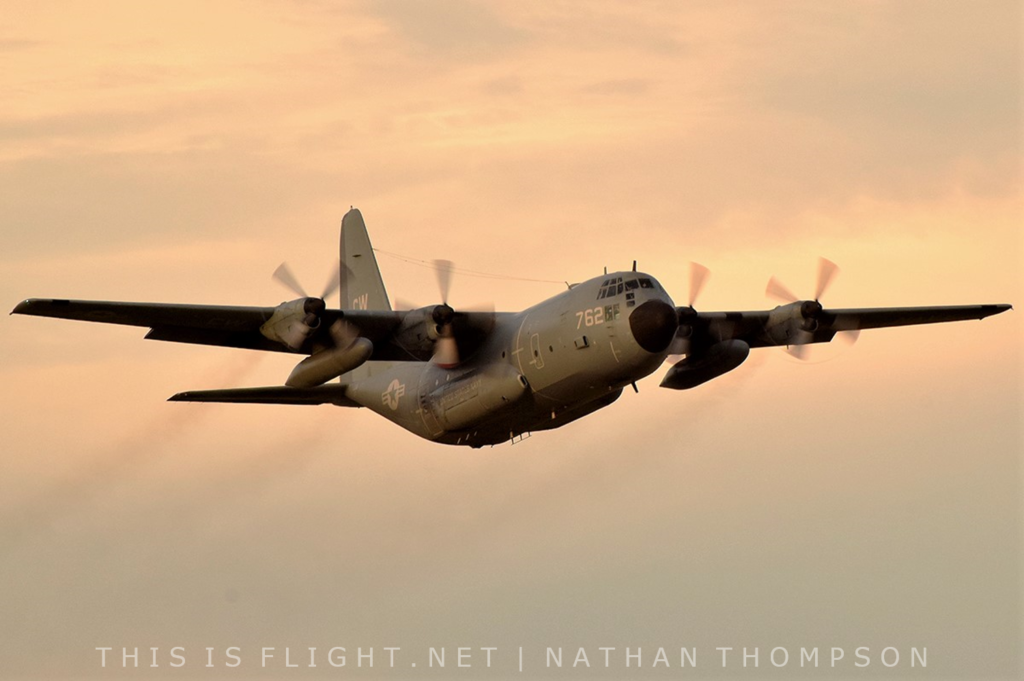 The next day was a long one; I arrived at my spotting spot in the morning just in time to catch the arrival of one of the EA-18 Growlers from VAQ-209 Star Warriors who were stopping at the show to appear on static display on their way home from the Gulf Of Mexico. Then it was time for the Special Airshow for handicapped and special needs kids, which also serves as a show practice for the main weekend event. Into the afternoon, a heavy stream of static aircraft continued to arrive, including a Coast Guard C-130 from Clearwater, Florida and a HH-60 Jayhawk from Mobile, Alabama in Centennial Colors! We had to move from our Spotting area to another for the Blues Practice on Friday afternoon, but we found a good location to watch, after which I ran home to prepare for my media flight. I had been scheduled to fly with the Aeroshell Aerobatic Team but I was nervous I would not fit or move wearing a parachute so I traded and got to fly on the CAF B-17 Texas Raiders instead. While in flight, the four T-6 Texans of Aeroshell joined up in formation for an air-to-air photoshoot – a very exciting experience. 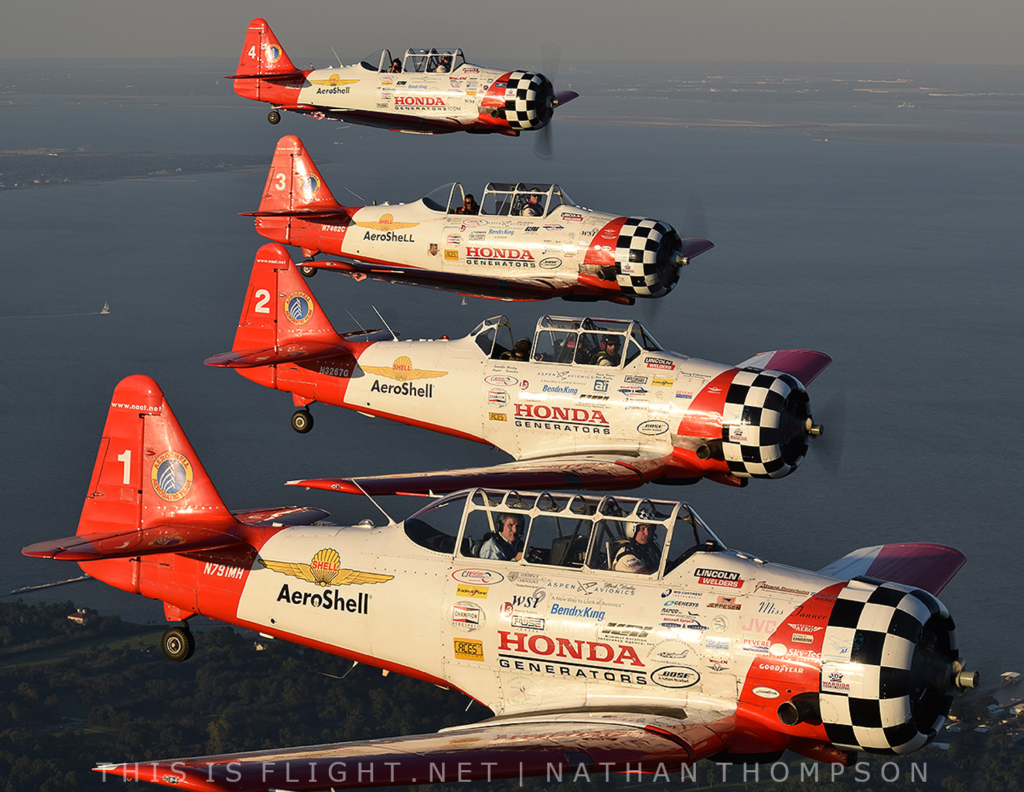 Saturday morning came early and was allowed to get sunrise shots of the impressive static display, which included a B-52 Stratofortress from Barksdale AFB, C-17 Globemaster III from Wright Patterson, C-130 Hercules from USCG Station Clearwater, HH60 from Mobile Alabama, P-8A Poseidon from Florida, EA-18 Growlers from VAQ-209, F-35A Lighting II from Luke AFB, F-16 from Tulsa ANG, AH-64 Apache, NASA T-38 and a host of warbirds and civilian aircraft. The A-10 Thunderbolt and HC-144 never made it in unfortunately. 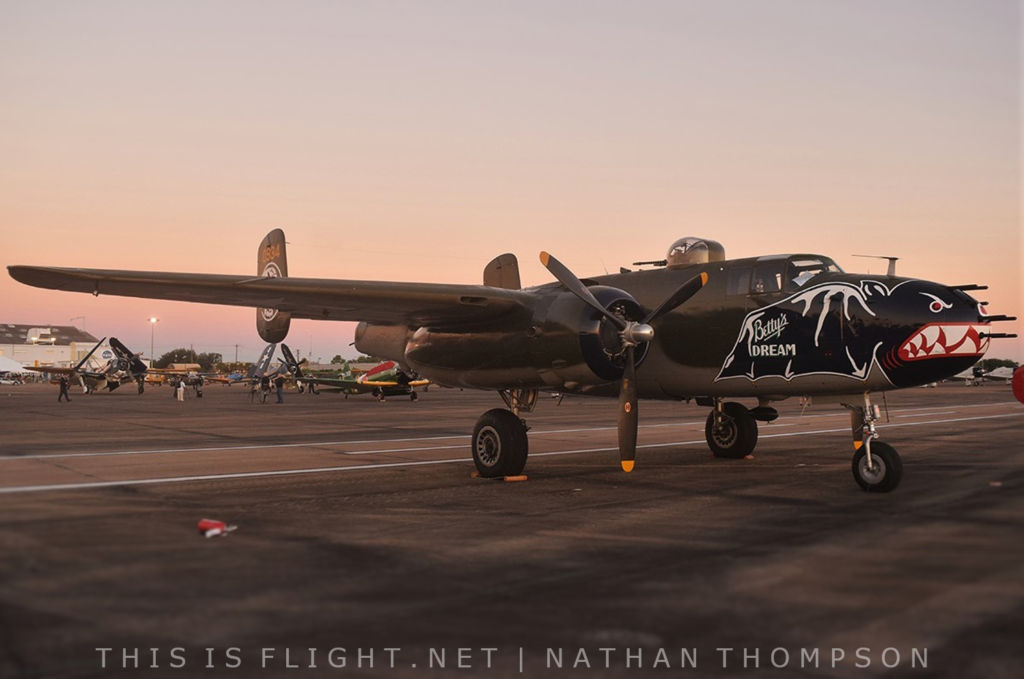 Flying started with scale  model remote control planes as usual at Wings Over Houston before the National Anthem. Debby Rhine Harvey was the first of the full-size airshow performances, followed by Matt Younkin and his Beech 18 aerobatic routine, which defies belief given that the aircraft is a twin-engine airliner from the 1930s! After he landed, the Texas Flying Legends Museum performed a wonderful battle re-enactment for formation flypast with their B-25, Avenger, Corsair, Spitfire, Mustang, and the Warhawk. 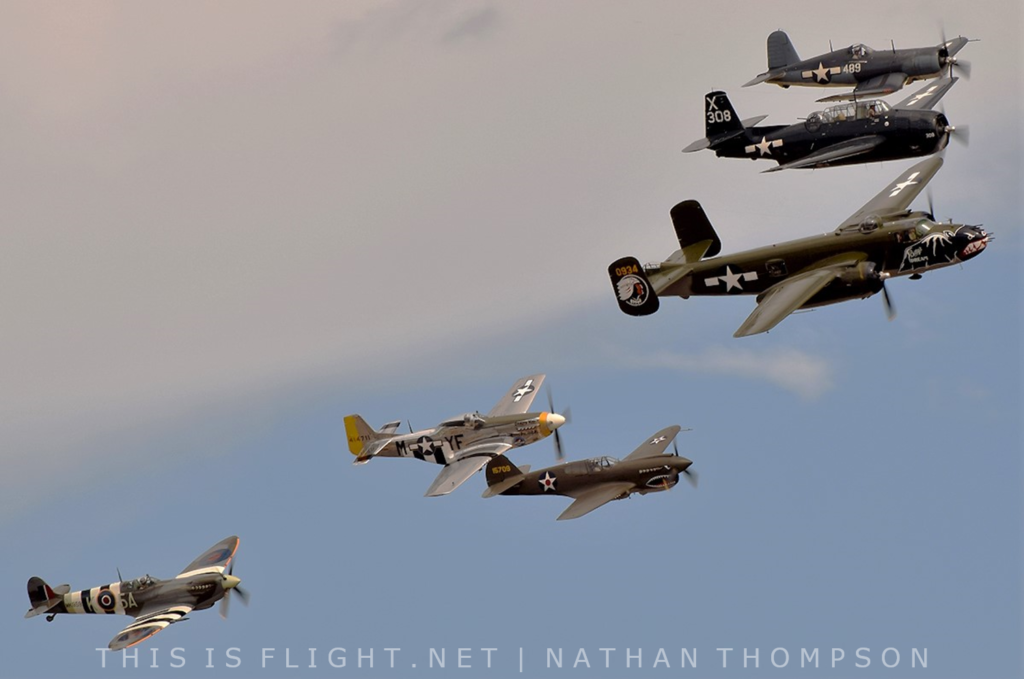 Wings Over Houston regulars Tora Tora Tora! performed their usual re-enactment of the attack on Pearl Harbor with Zeros, Kates, and Vals along with the B-17 and P-40. It’s always a good show with liberal use of pyrotechnics. Next, the trainers, then the USAAC and finally a gaggle of warbirds from the US Navy; SBD Dauntless, TBM Avenger, SB2C Helldiver, Corsair, F7F, and two F8F Bearcats. Next it was the turn of the fast jets, as P-47 “Tarheel Hal” took off followed by the F-35A Lightning II. After the two very different aircraft had left the area to join up in formation, the USAF F-16 Demo Team put the Fighting Falcon through its paces in a punchy display comprising many manoeuvres used in real-life combat situations. 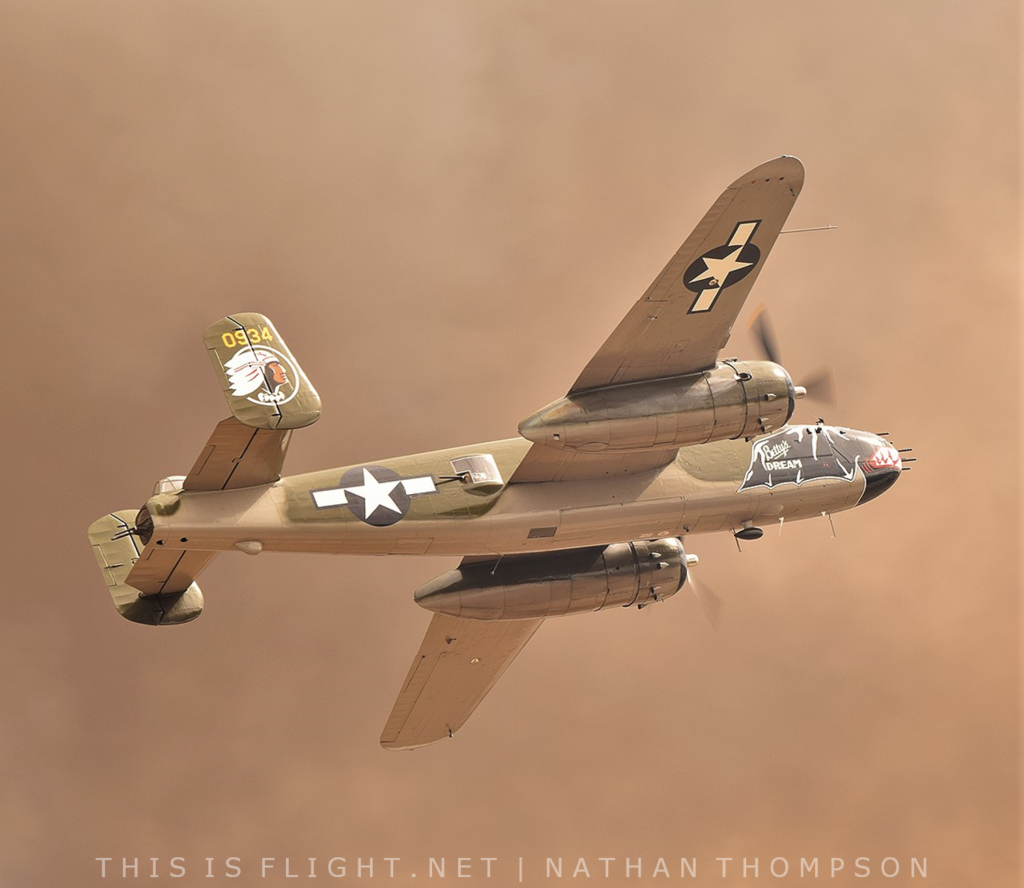 Sean Tucker then took off for his crazy routine, although it was tinged with sadness as 2016 supposedly this will be the last year for the Oracle Challenger; Tucker wants to start a 4-ship formation team next year. It was therefore fitting that he was followed soon after by the Aeroshell Aerobatic Team with their four T-6 Texans. The Blue Angels were, of course, the headliners, and they always put on a spectacular show. I have attended Wings Over Houston 30 times, and the organisers never fail to put on an excellent airshow;  I can’t wait to do it all again next year! 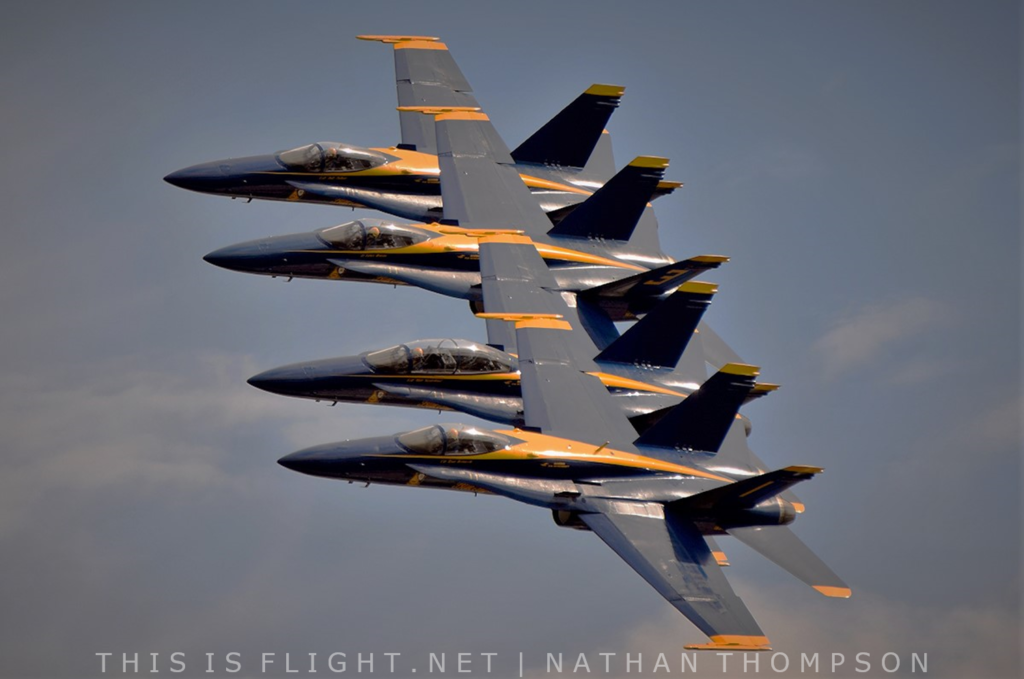