2016 marks 75 years of flight operations at Luke Air Force Base in Glendale, Arizona. Since the base opened in 1941, it has migrated from the humble T-6 Texan, to the enigmatic F-35A Lightning II, and has been committed to its mission of training some of the world’s greatest fighter pilots. Luke is currently the United States Air Force’s primary training base for the JSF, and they are proud to have that distinction. Luke Air Force Base and the 56th Fighter Wing presented “75 Years of Air Power” on 2nd-3rd April 2016 in a fantastic display of US air power, skill, and dedication. 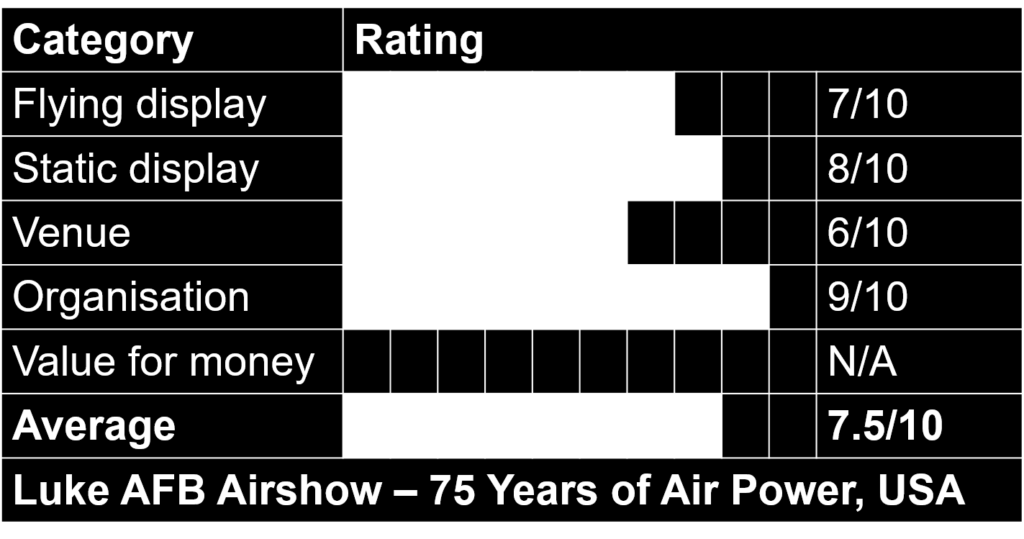 Even until early Saturday morning, arrivals were rolling in steadily. First a KC-135, then the Thunderbirds’ support C-17 followed by none other than the Thunderbirds themselves. As they finished learning the field and setting their hit points, I noticed a lone F-35A take to the sky. 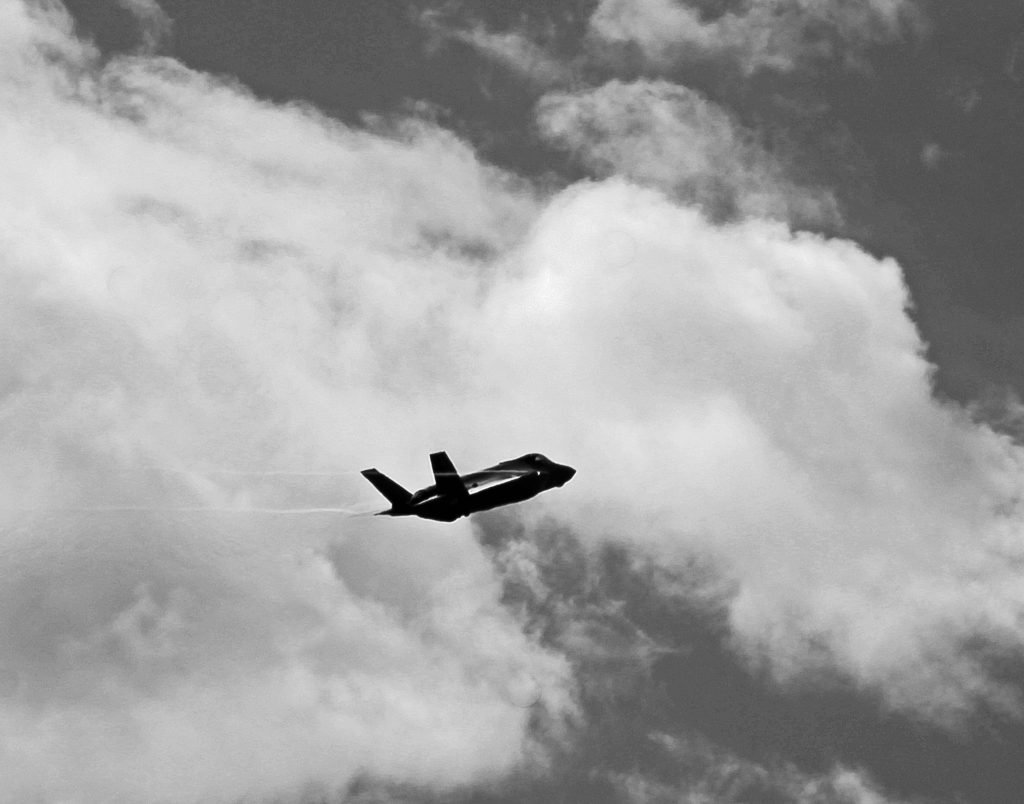 The F-35A defied expectations on the Friday with an impromptu demonstration. Photo: Jacob Hanna

It was surprising, mostly because they always depart with F-16s, who are also heading down range. Oddly, this pilot was by himself, and turned right over the base; also something they never do. I figured he might make a few passes to practice for the heritage flight the next day but I could not have been more wrong. My eardrums nearly burst when the F-35 came screaming over the runway. He pitched up sharply, and his wing tip vapor trails followed him straight into the sun. For the next 15 minutes the jet darted and rolled across the runway at a myriad of different speeds and altitudes. I was completely awestruck. After seeing this impromptu demo, I challenge any one to tell me the F-35 is a turkey.

Following the F-35 was Kirby Chambliss in his Edge 540, T-33 Ace Maker and a beautiful B-1B Lancer. The rest of the aircraft eventually trickled in over Friday night and into Saturday. 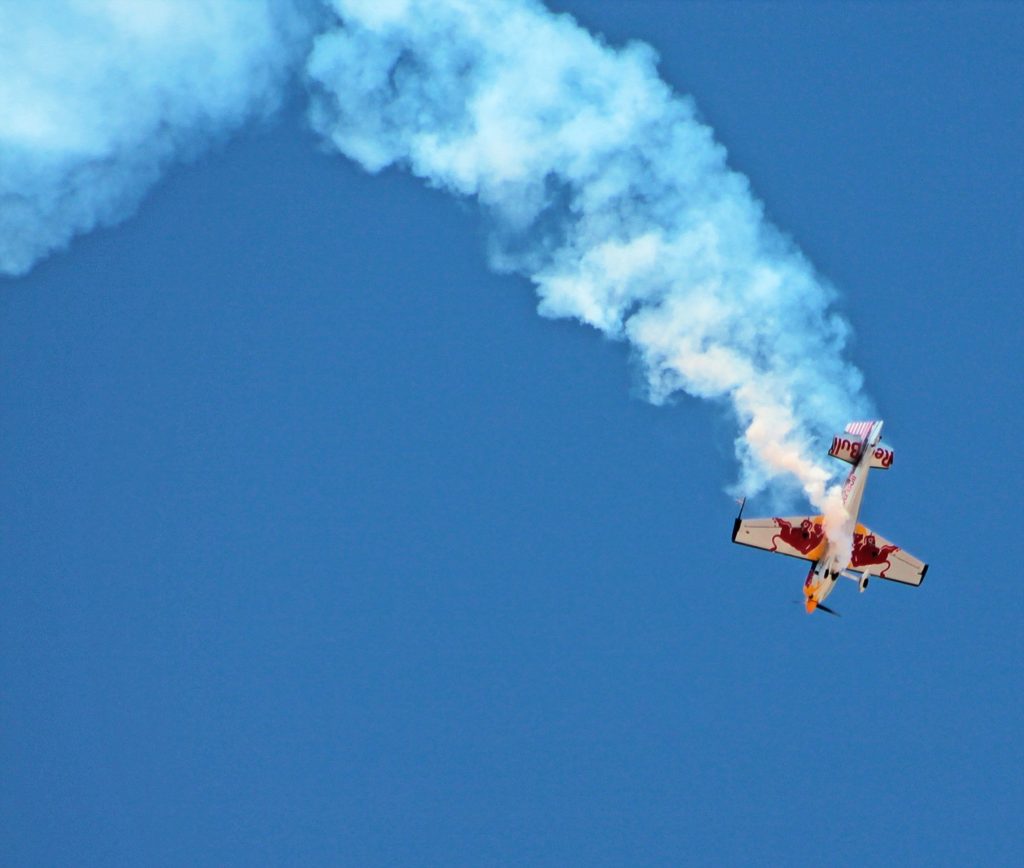 Red Bull Air Race pilot Kirby Chambliss is one of the most populat aerobatic pilots in the USA. Photo: Jacob Hanna

“This time last year it was nearly 100 degrees!” (37°C) seemed to be the phrase of the day as Luke Air Force Base opened its doors to thousands of spectators. The morning started out at a cool 65ºF (18°C) but only warmed up by about 20 degrees (to 30°C) as the day went on, which is considered chilly in the Valley of the Sun, with just a few clouds in the sky. 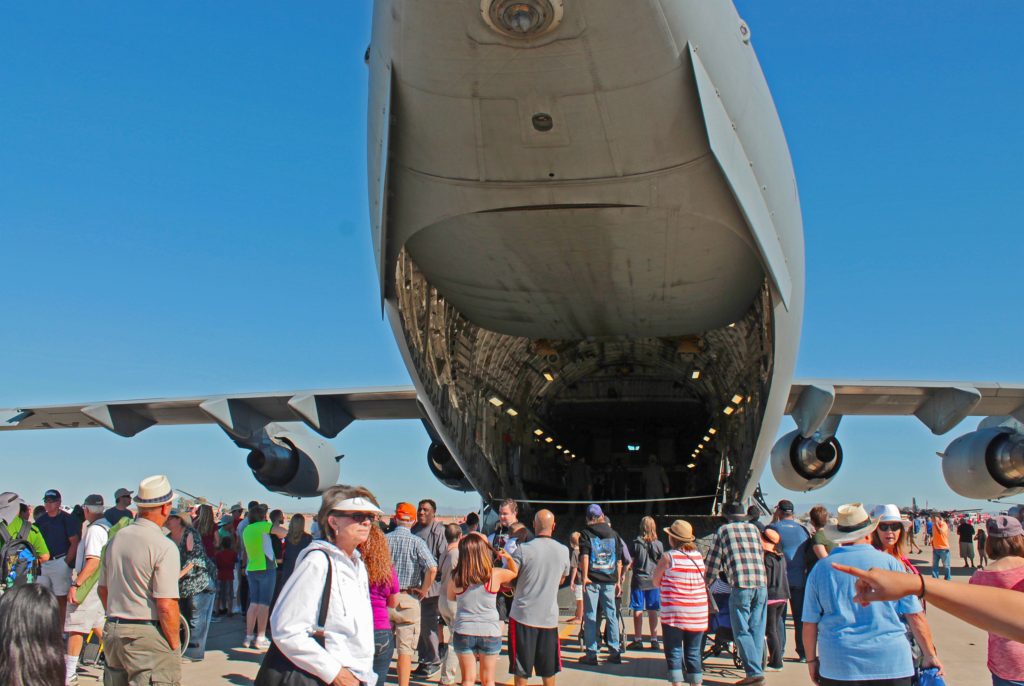 Getting on base with the media was very painless. There was a car search, such is life in post-9/11 America, but after that we had free reign of the flight line. I was excited for the static line-up and it did not disappoint. As mentioned, there was a KC-135, a C-17, and a B-1B. Beyond that, the Tora! Tora! Tora! aircraft were parked all in a line, along with a P-40 and the local B-17 Sentimental Journey. The resident aircraft from Luke were on display: the wing commander’s F-35A along with two others, 3 F-16s from training squadrons, one from the Republic of Singapore Air Force based at Luke, and a non resident F-22, F-15, and A-10. 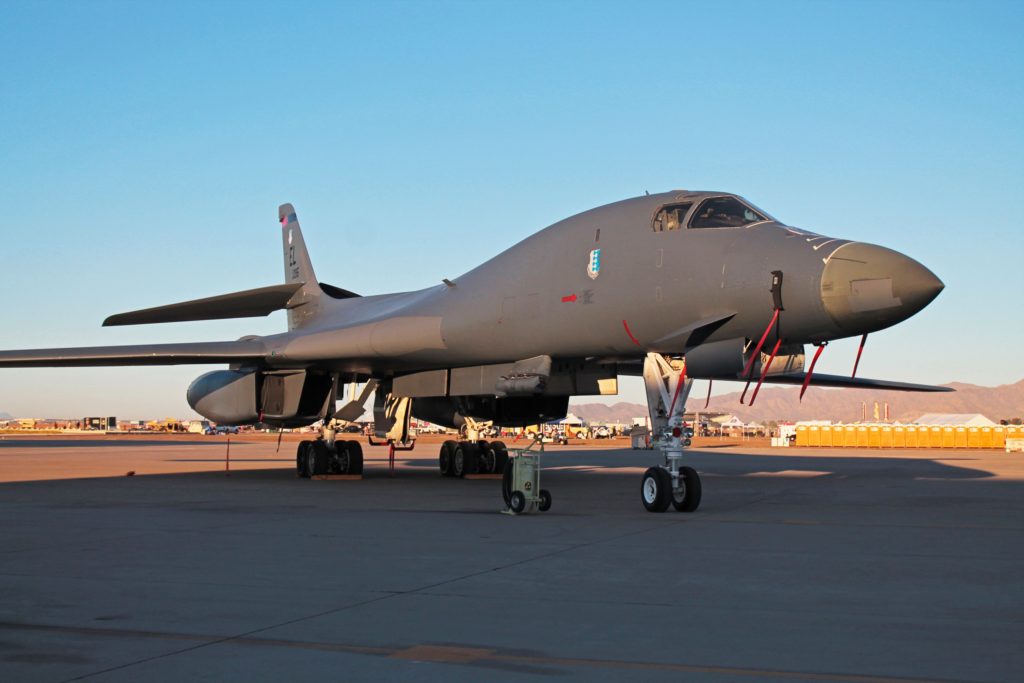 The B-1 Lancer, is slowly increasing its number of airshow appearences post-2013 sequestion. Photo: Jacob Hanna

Combined with various other civilian aircraft, warbirds, and the fact that most of the aircraft were under shade, the static display merited an eight. There were more numerous and varied aircraft than the previous show here, and as I mentioned they were mostly in, near, or provided shade. 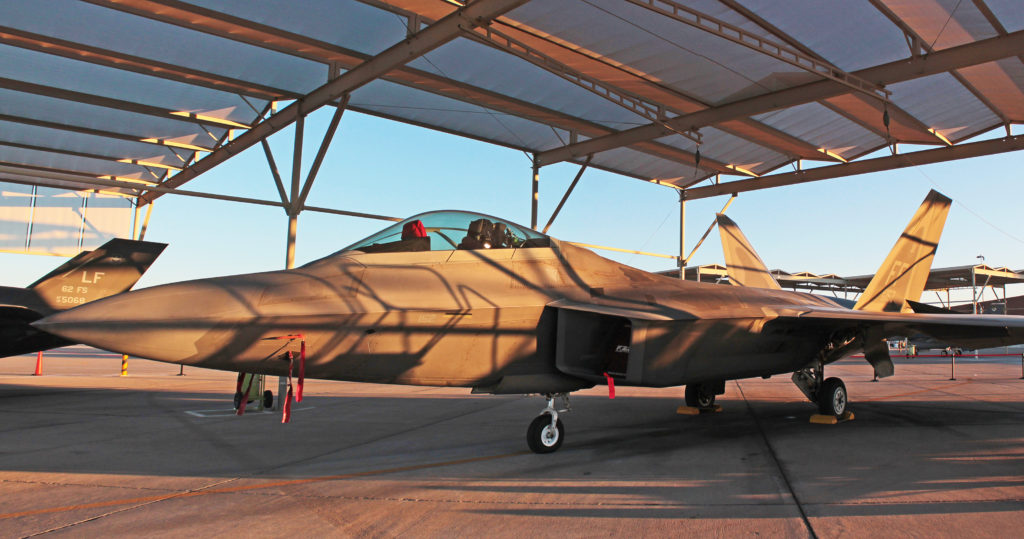 Many of the static aircraft were parked in – or close to – shade. Photo: Jacob Hanna

In my opinion, crowd control was done smartly. Glendale had the main street into the base closed all day to allow people to enter/exit unobstructed by traffic or confined to sidewalks. Hundreds of people could be entering/exiting at one time. Just before flying started was peak attendance, where a bottleneck did form before entering the flight line, however, I think this is to be expected. 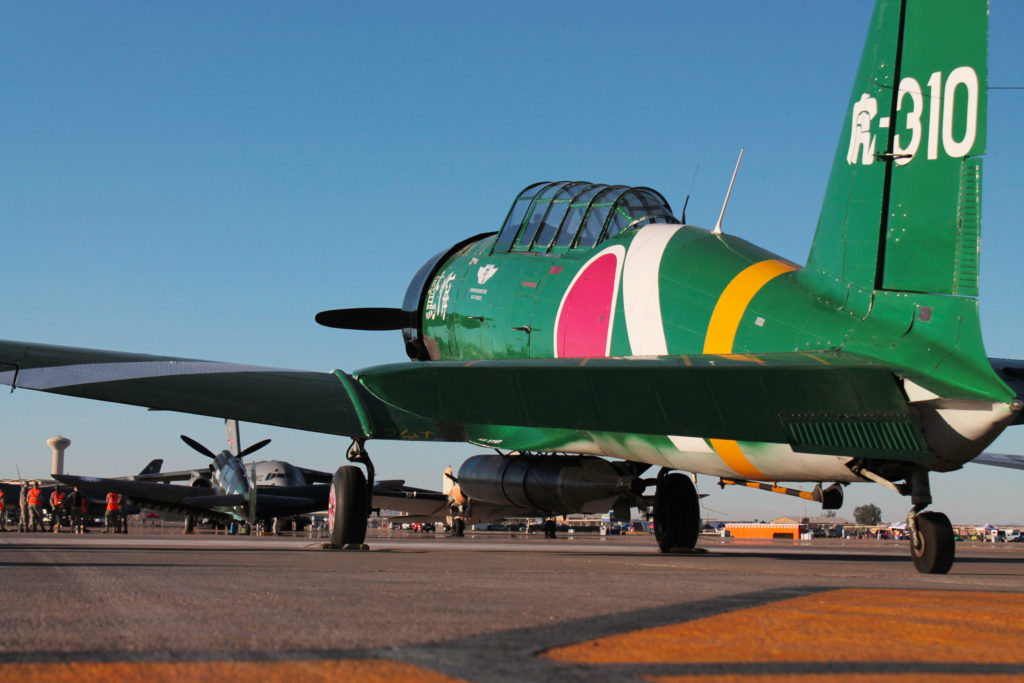 The static display was varied and well-arranged. Photo: Jacob Hanna

The vendors were located on the dirt in between the main ramp complex and the first of two parallel runways, where the Thunderbirds were parked. There was also a nice children’s area with inflatables and small carnival rides, as well as some Army hummers and other vehicles. This was a great use of otherwise dead space, but it lifted a lot of dust into the air. Not to mention I saw a few stroller-pushing parents inadvertently spill their children onto the dirt. The openness of the area allowed for the situation of tents and other show front objects to be placed exactly where they needed to be. 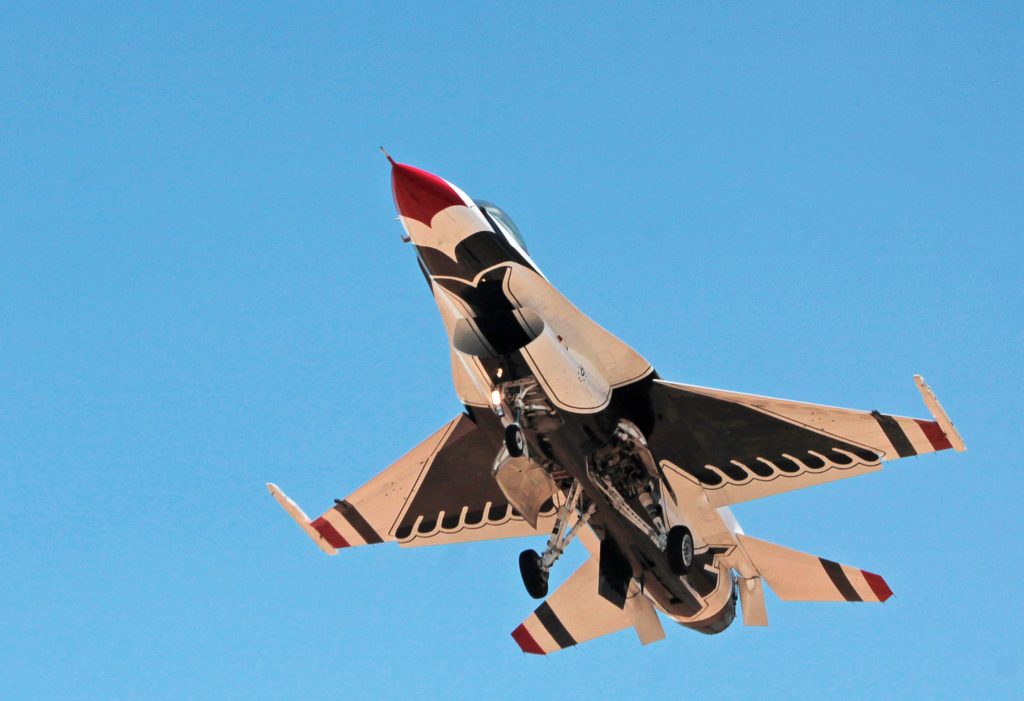 Overall the venue deserves a six. Some of the things I mentioned cannot be fixed. One thing that could be improved on for next year, and should be in my opinion, is the addition of water trucks. I understand that vendors want patrons to purchase their products, however water is a necessity. In a state where almost a thousand people die each year from heat related conditions, I think adding a couple water stations would be greatly appreciated. 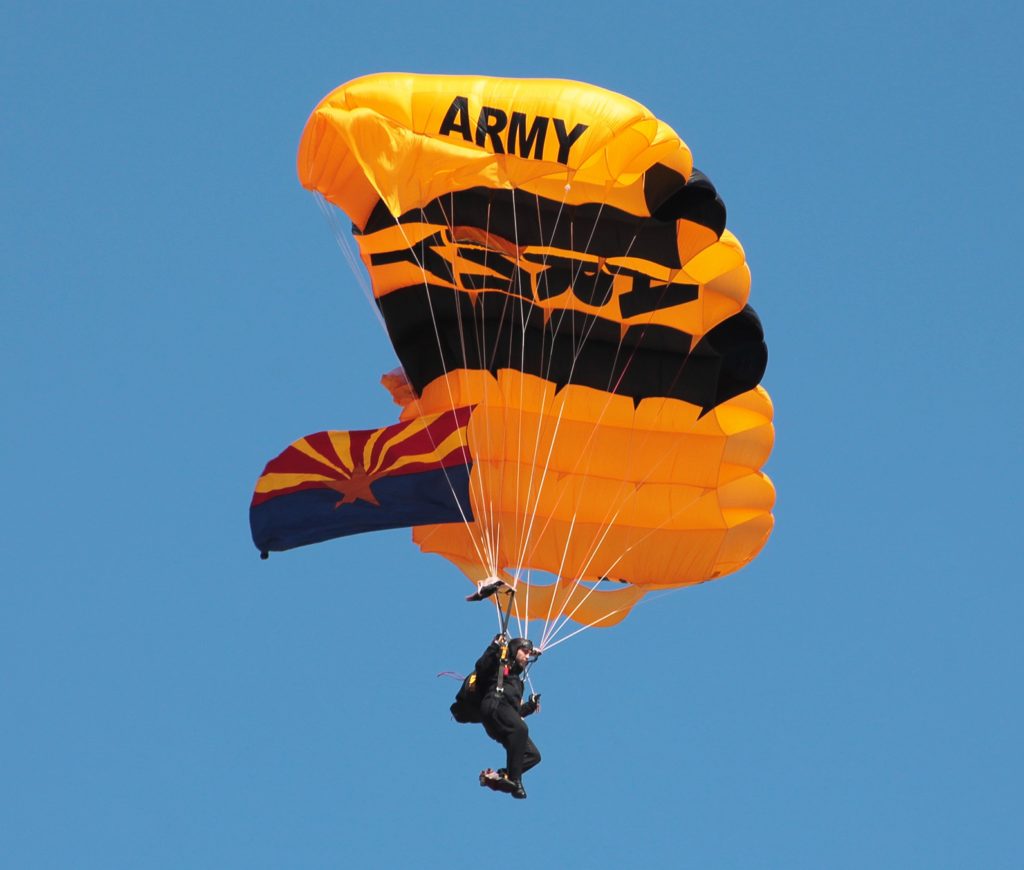 The Golden Knights are the official parachute display team of the US Army. Photo: Jacob Hanna

The aerial displays started promptly at 11:00 am with the US Army Golden Knights. The Knights opened the show by jumping with an American flag while the national anthem played over the loudspeakers. Kirby Chambliss flew circles and loops around them to add some energy to their entry. Next was the Desert Rats in their Nanchang CJ-6s. Their display was a nice warm up to the more thrilling acts later in the day. 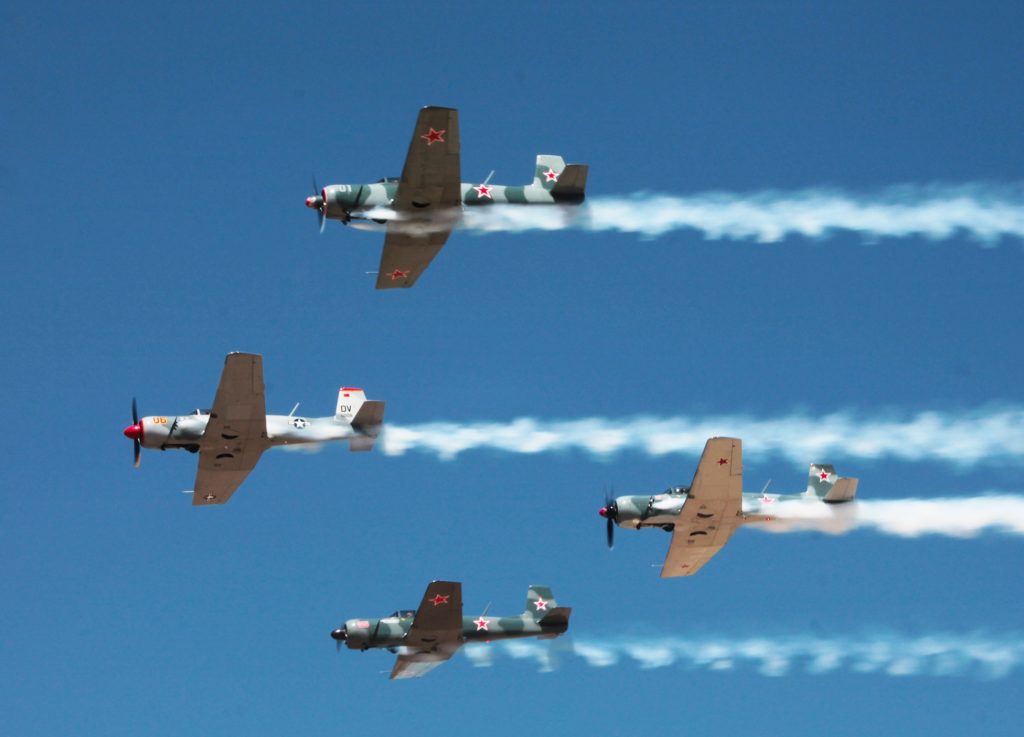 The Desert Rats are a locally-based team who perform at few events aside from the show at Luke. Photo: Jacob Hanna

Greg “Wired” Colyer followed in his T-33 Ace Maker in a nostalgic display of the golden age of jet fighters, followed by Tora! Tora! Tora! with their reenactment of the bombing of Pear Harbor. Several replica Zeros, Kates, and Vals took to the sky for pass after pass of devastating destruction. The pyro display even included a faux bombing of the USS Arizona, producing a massive fireball. However, the narration made the show in my opinion. The narrator explained what was going on: “what a way to enter a war. Unarmed, out of fuel, and with out a place to land,” we heard from the cockpit of a B-17 as it struggles through the danger zone, when suddenly a P-40 comes out of the sun and begins to pick off the Zeros one by one. The P-40 is the obvious hero of the display and performs a victory roll before the whole cast returns to land. 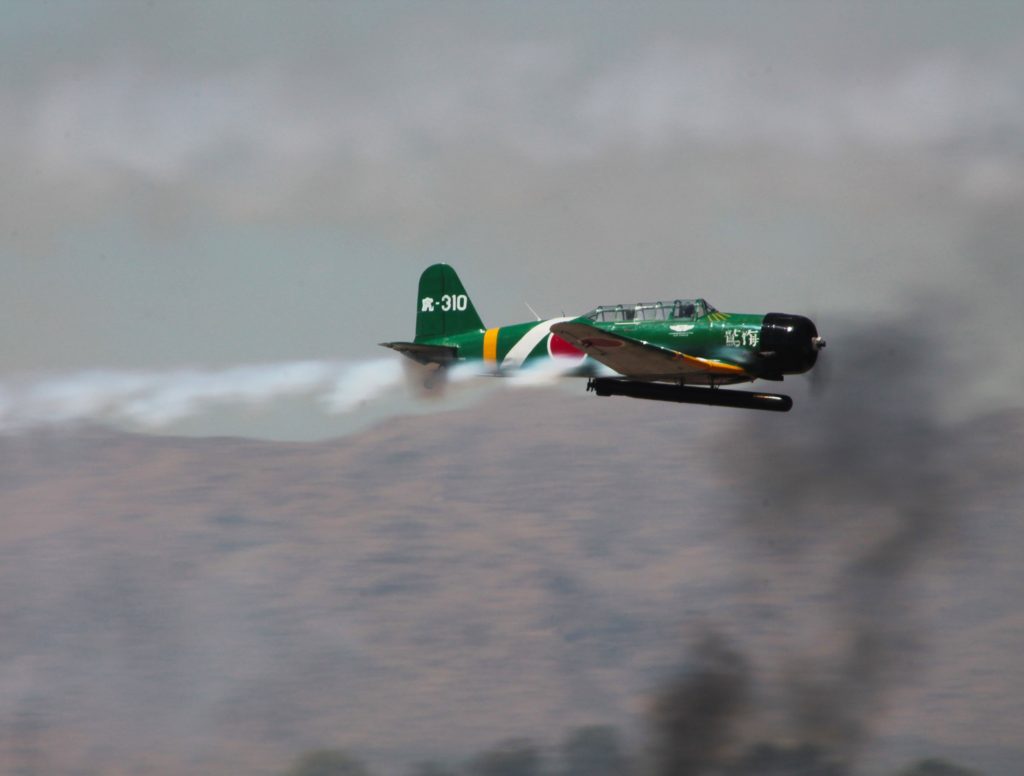 Similar to the film of the same name, Tora! Tora! Tora! tell the story of the USA’s entry into WWII. Photo: Jacob Hanna

The real star of the weekend, however, was undoubtedly the F-35 Heritage Flight with their debut performance. The F-35A Lightning II flew three formation passes with it’s namesake, the P-38 Lightning. It was a magnificent display of how far aircraft design and technology has come. It was interesting to see how much wake turbulence comes off of the Joint Strike Fighter. Under the right light conditions, the wingtip vortices are visible with the naked eye. 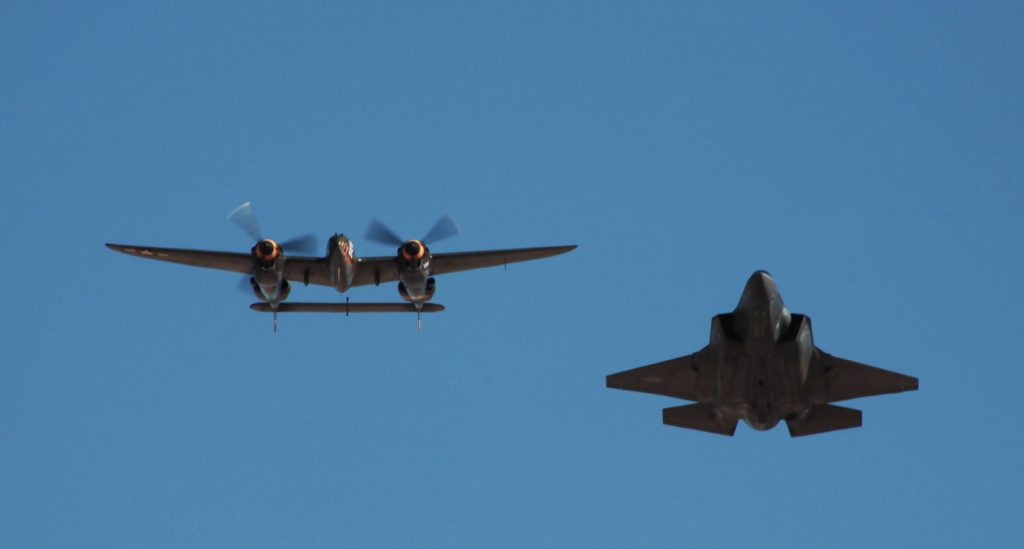 The airshow at Luke was the first public appearence of the F-35 Heritage Flight. Photo: Jacob Hanna

Proceeding from the historic heritage flight, was the Alabama Boys with some comedic relief, before the 56th Fighter Wing showcased what their students are learning with a tactical air support demonstration. Nacho, Grande, and Salsa flights demonstrated the force and lethality of the venerable F-16 Fighting Falcon by neutralizing simulated enemy forces. 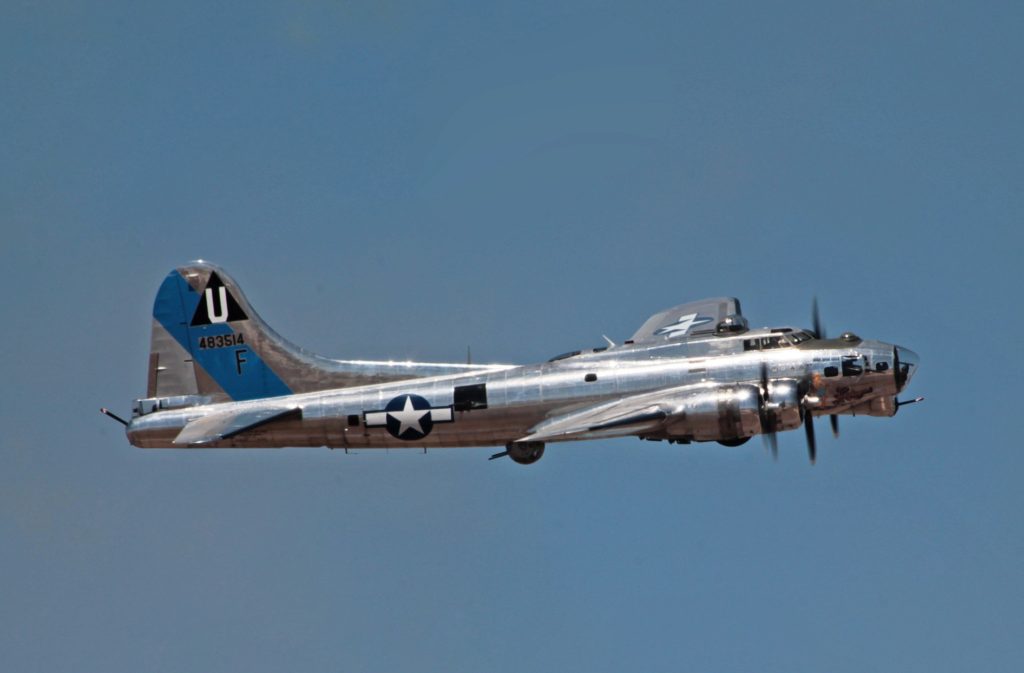 Local warbirds such as this B-17 Flying Fortress participated in the flying display. Photo: Jacob Hanna

What do you get when you strap a Learjet engine to the bottom of a biplane? The Jack Link’s Screamin’ Sasquatch. As I approached the flight line I could see a biplane flying around, but I kept hearing jet noises. I searched the sky wondering what was making that noise, then I realized; it was the biplane! This very strange aircraft is a 1929 Waco biplane with a CJ-610 turbojet engine fixed to the bottom of the fuselage. The aircraft is relatively new to the airshow circuit and put on a rather interesting display.

The ever-popular Thunderbirds are the pride of the United States Air Force. Photo: Jacob Hanna

Closing out the show were the USAF Thunderbirds. I always love how the atmosphere changes when they begin their show. Everyone stops and pays attention. Their most exciting maneuvers were the inverted opposing knife-edge pass, the cross over pass, and the sneak attack. I always love seeing people’s reactions when the jet noise hits them. The Thunderbirds were precise, sharp, and disciplined throughout their display, and represented the Air Force well. I look forward to seeing them later in their season. 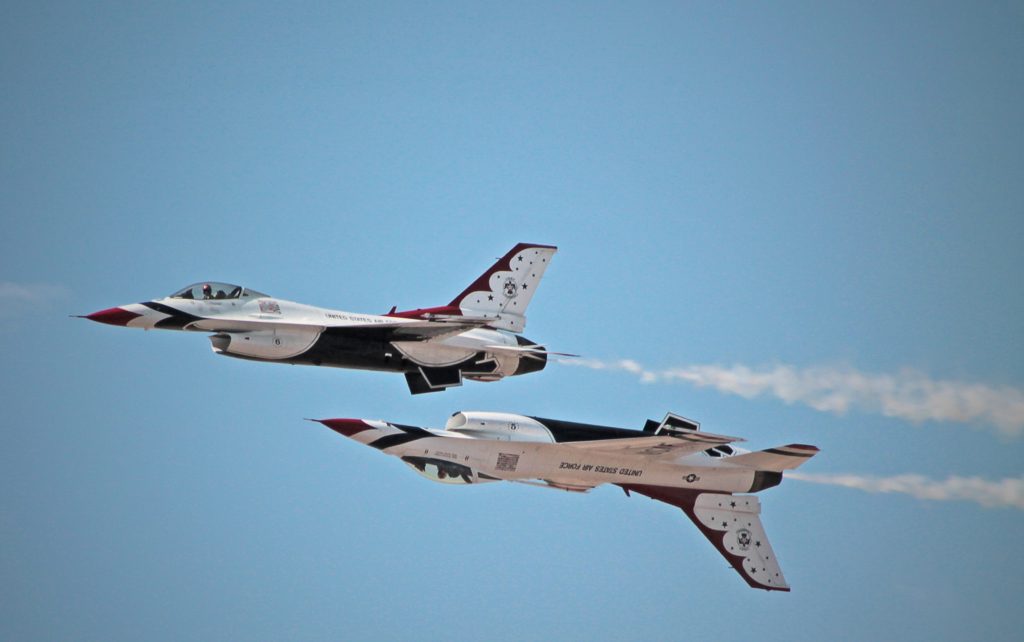 The two solo pilots are famed for performing dynamic maneuvers such as this mirror pass. Photo: Jacob Hanna

In summation the aerial acts warranted a seven from me. The displays were well performed, varied, and exciting. I would have liked more from the F-35 heritage flight, however. It was historically significant to use the P-38, of course, but in the future I would like to see the F-35 with other heritage aircraft as well. The narration of the shows was excellent, although there seemed to be a bit too much dead time between the acts. 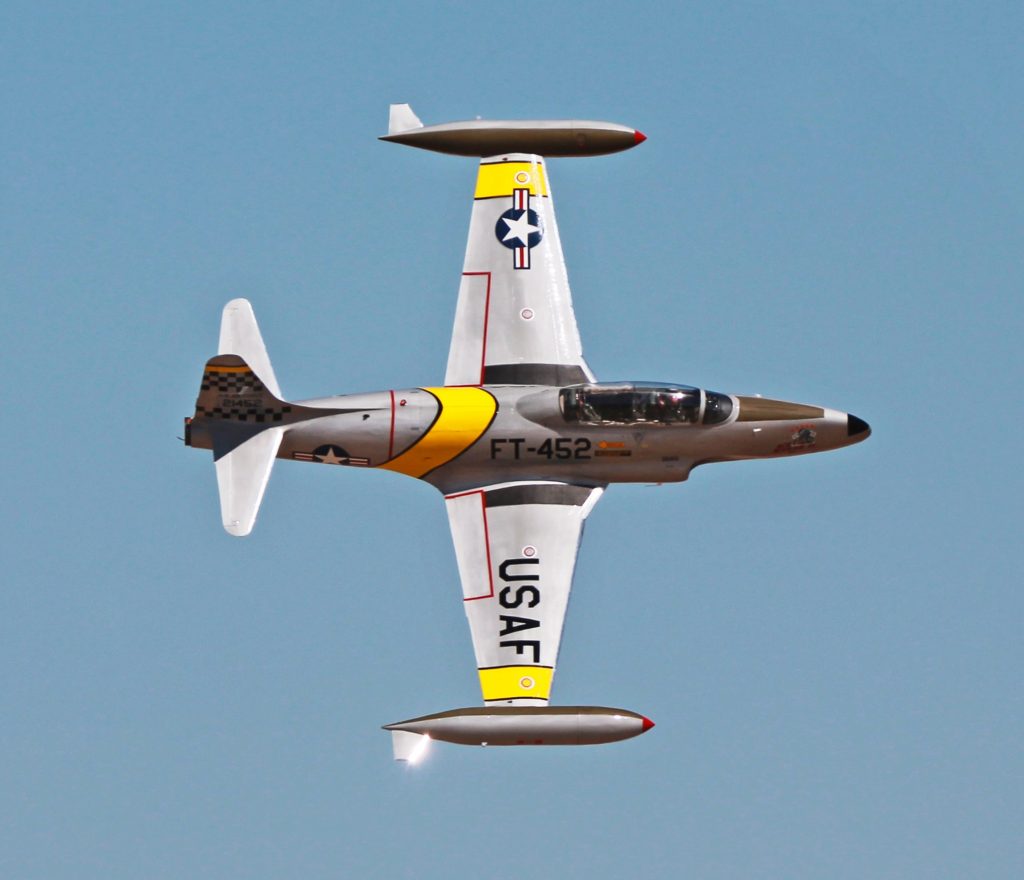 Averaging my ratings derives a seven. I was impressed with the growth Luke has gone through from the previous show to this one, and they hosted a good mix of Air Force and civilian aviation demonstrations. However, there are a few things that should be addressed before they can say they put on a great show. That being said, I am still excited for what Luke has in store for future airshows. 56th Fighter Wing Operations Group Commander Col. Chris Bailey said, “I can’t think of anything that’s more cool than seeing F-35s and F-16s beat up the pattern.” 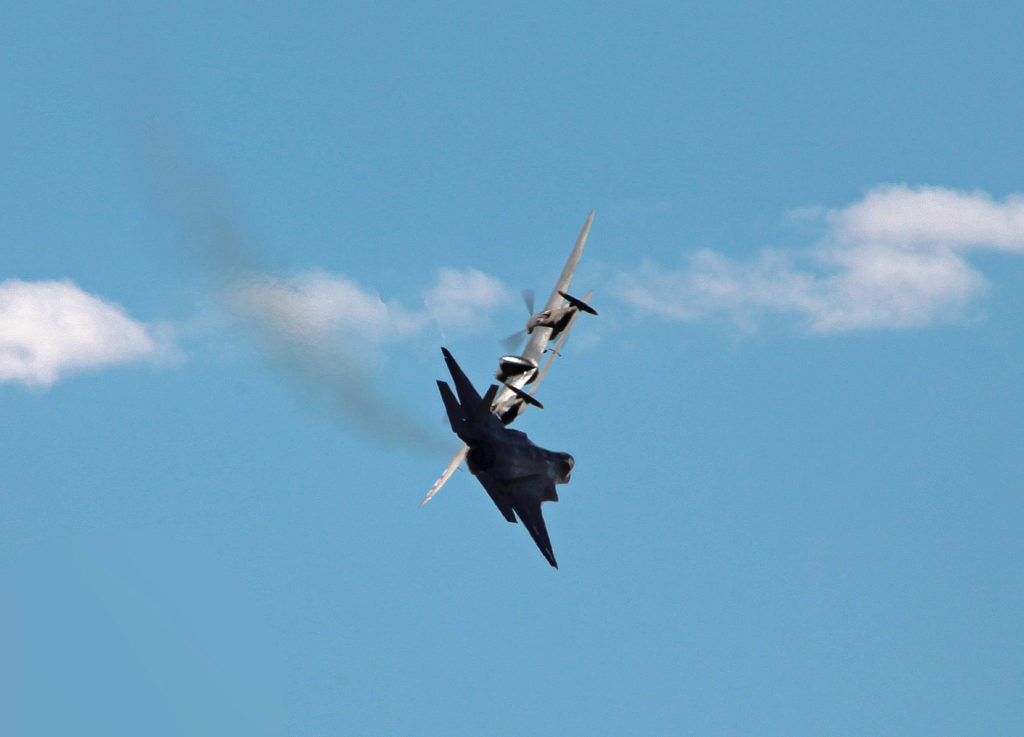 The F-35 Heritage Flight will also fly outside the USA – their international debut will be RIAT in July. Photo: Jacob Hanna

If you are in the area and interested in visiting Luke, Colonel Bailey said the base gives frequent tours. Contact Luke Public Affairs at 1 (623) 856-6011 for more information.

Jacob Hanna is a commercial pilot and student, currently attending Arizona State University. He enjoys aviation photography and regularly attends aviation events through out the state of Arizona.