Many years ago I watched the Farnborough Airshow from the comfort of my home TV, Raymond Baxter, a Spitfire pilot from WW2 was the commentator. As I look back I recall many aircraft that are now either museum pieces or scrapped on the flightline. One that always intrigued me was the Harrier, now many year after we see the F-35B, aircraft we once thought would never be replaced are now in the shadow of new technology, the trade days showcased many new and innovative machines. The public display days had some of the new technology on show, the lead up to the public days was dogged by controversy. The UK’s premier display team, the Red Arrows announced that they would be at the show, but not performing any displays. No participation from any front line RAF aircraft also added to the disappointment. Safety was cited, the CAA affect had reached the one of the UK’s largest trade and public show.  A number of aircraft cancelled prior to the show, for the aviation enthusiast this does disappoint. The show did lack modern military aviation. 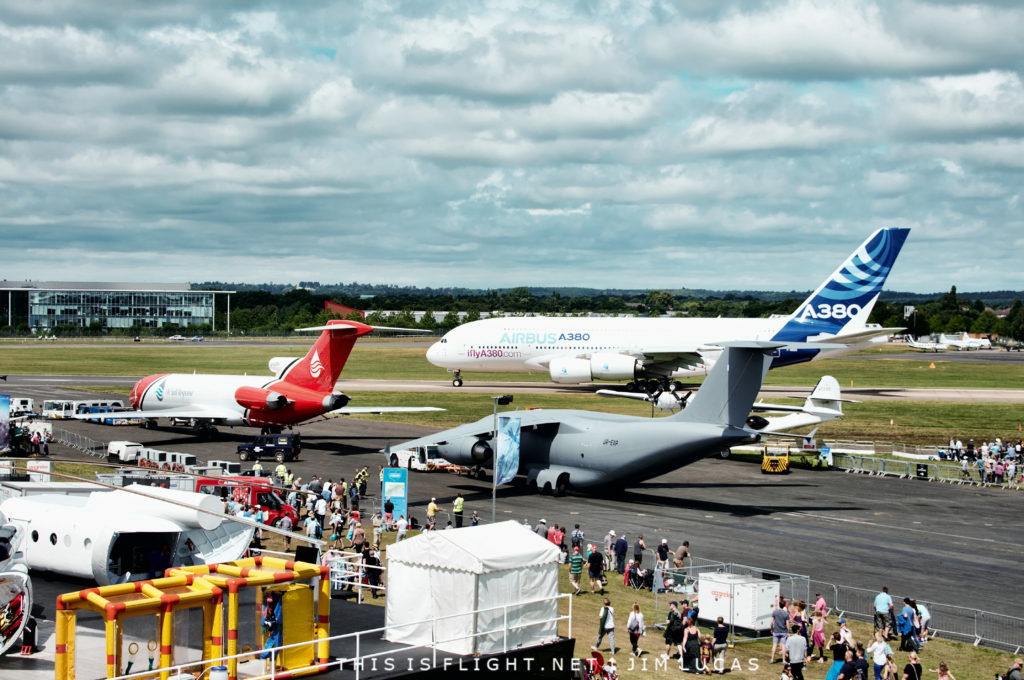 Despite the MET office prediction of cloud, and more cloud, the Saturday show was bathed in sunshine, the odd cloud, a great atmosphere and some fantastic displays. Earlier in the week the rain had halted one of the trade days. To open the show we had the Airbus A380, you have to watch in awe at the size of the aircraft, then sit back and observe as the pilot throws it about the sky like a fighter jet, banking, tight turns, power; you name it, this aircraft has it. No doubt many in the public arena watching this just thought these aircraft flew straight and level, this display would show them a very different side to the aircrafts capabilities, that said I’m sure many wouldn’t like to be a passenger as it did its display. Following on straight away, one down one up was the Airbus A400M, again Airbus never fail to amaze the public below. The A400M is a formidable machine and will serve the nations who use it well. Fortunately due to the size of these aircraft the public got to see the displays along the entire length of the display line, sadly many of the other displays were centred in the main opposite the runway enclosure, beyond the parking for the Red Arrows, and from the end of the crowdline you only saw the aircraft when it was coming into land. We were then entertained by the Twister Aerobatic Team, an agile aircraft with its roots from a radio controlled Aerobatic Model, this was followed by the Goodyear Corsair FG-1D (G-FGID) owned by the Fighter collection, this example of the Corsair is painted in the colours of a British Fleet Air Arm machine, KD345 of 1850 Squadron during December 1945, when they were embarked on HMS Vengeance of the British Pacific Fleet. 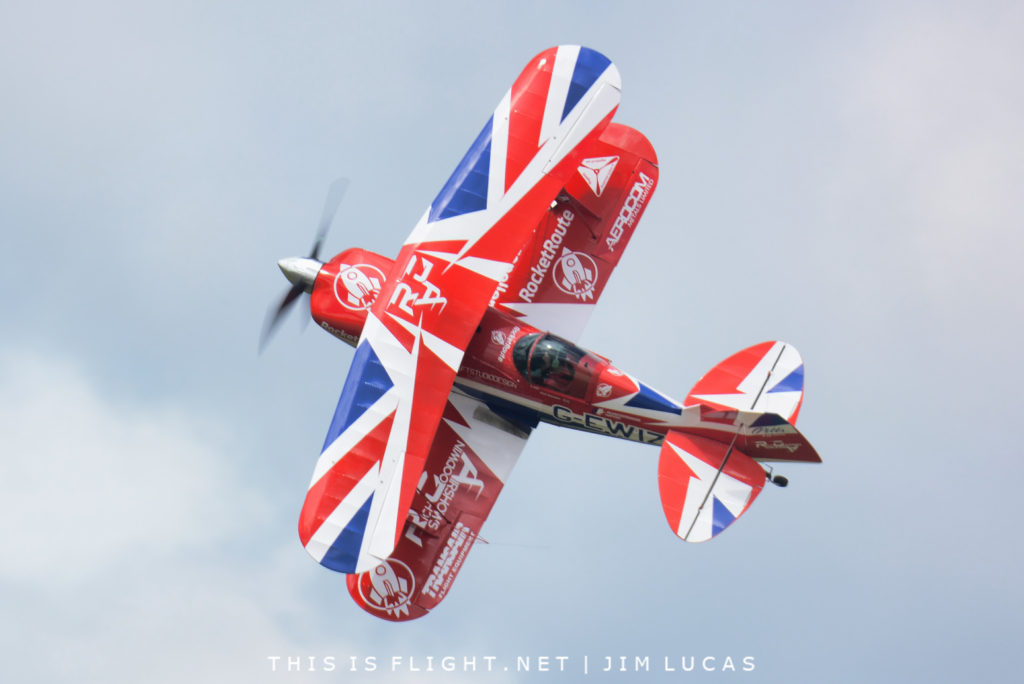 There was plenty of “light entertainment”: Rich Goodwin’s Pitts Special had plenty of bangs and smoke in its display that woke the crowds, the Stolp SA-300 Starduster performed and the Breitling Wingwalkers in their Boeing Stearmans threw plenty of smoke around during a rare four-ship routine. Something different was the Antonov 178: this aircraft An-178 is a short-range medium-airlift military transport aircraft designed by the Ukrainian Antonov company and based on the Antonov An-158. It’s always a thrill to see something different at airshows, it’s what Farnborough should be about. The aircraft was put through its paces and I have to say I was impressed by what it did. The Blades Display Team and the 2Excel Aviation 727-200 took off to the hold, a grand entrance by the team saw the 727 flanked by the Blades Extra EA-300s, the 727 then peeled off and commenced its display. Again a large aircraft putting on a display to rival many.

Something else that was different was the Private Wings Flugcharter Dornier Do-328JET-310, again an aircraft that is not seen at most airshows, and the fact that this is a trade show allows such displays to take place. 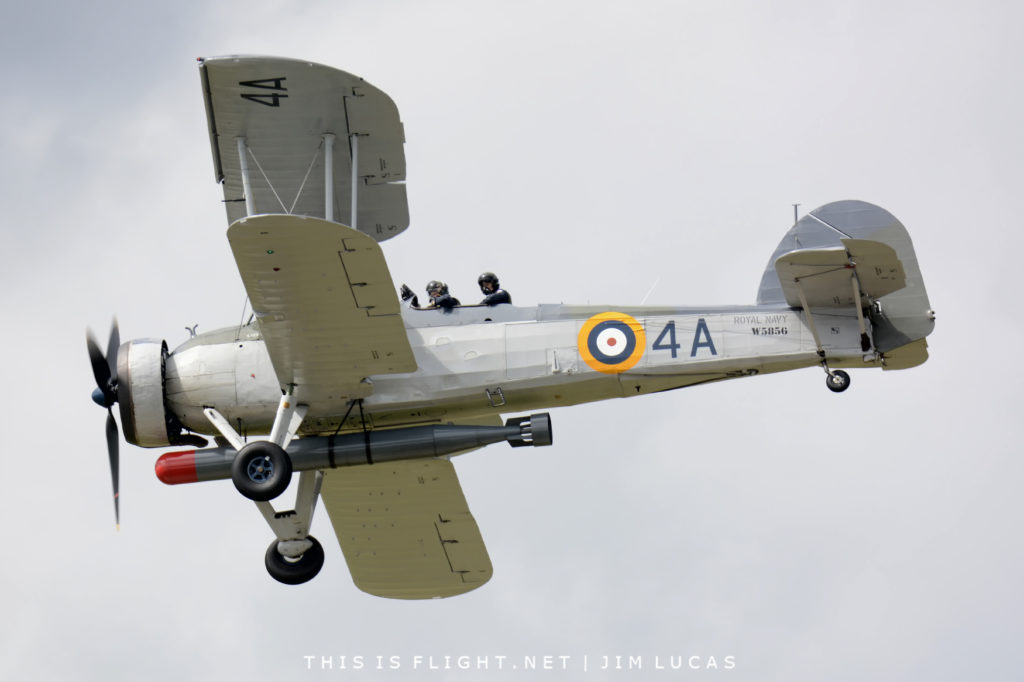 Now for a grand old machine, the Fairey Swordfish, built by Blackburn Aircraft at Sherburn-in-Elmet, this example show the vulnerability of the aircraft, vulnerable yet potent. The Torpedo bomber has a great history. What many came to see was the F-35B. The F-35 performed a flat display, a few passes before it performed its hover. This especially, along with the noise I’m sure, pleased those watching. It seems from many watching that the love affair with the Harrier is not over, much was said about comparisons, the young amongst the crowd will no doubt see this as their Harrier moment and not forget the first time they saw it as I did on TV all those years ago. Back to the vintage aircraft, the Yak-3, B-25 and Spitfire took to the skies. Again, the displays were again limited to the centre of the crowdline, those further up only seeing a distant show. It’s nice to see such aircraft in the air, the dedication and skill by all those involved has to be admired, although they aren’t suited to large venues such as this. 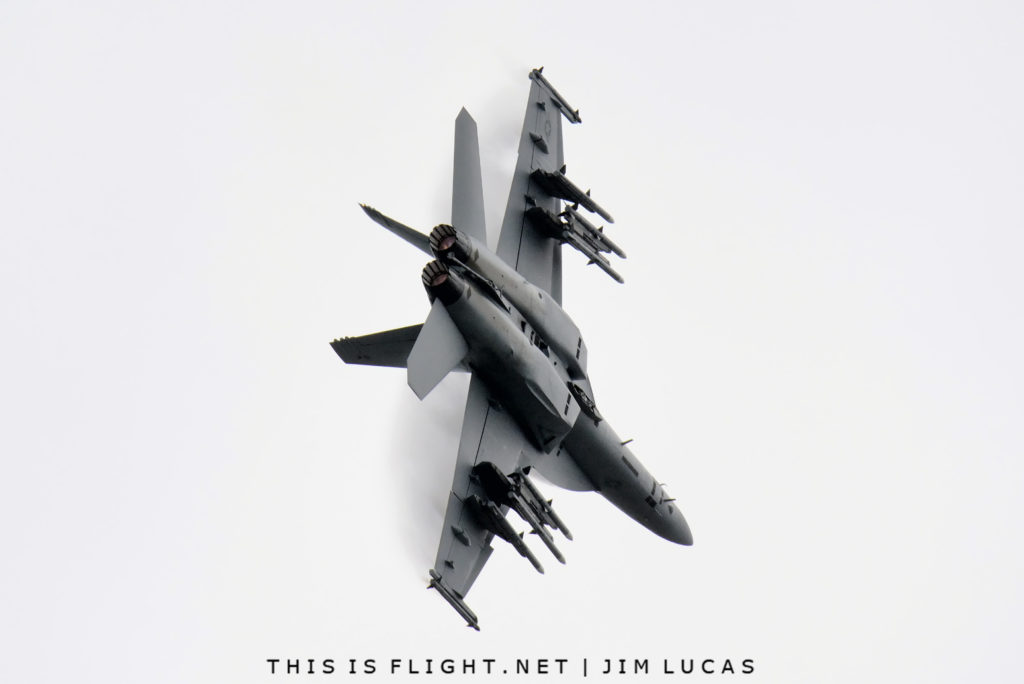 The USN/Boeing F/A-18F Super Hornet gave the crowds what they wanted, a display that showed power, manoeuvrability and excitement. Its rival on the day was the BAE Typhoon, which too gave the crowd a buzz. It would be hard to say who won on the day, both gave stirling performances. 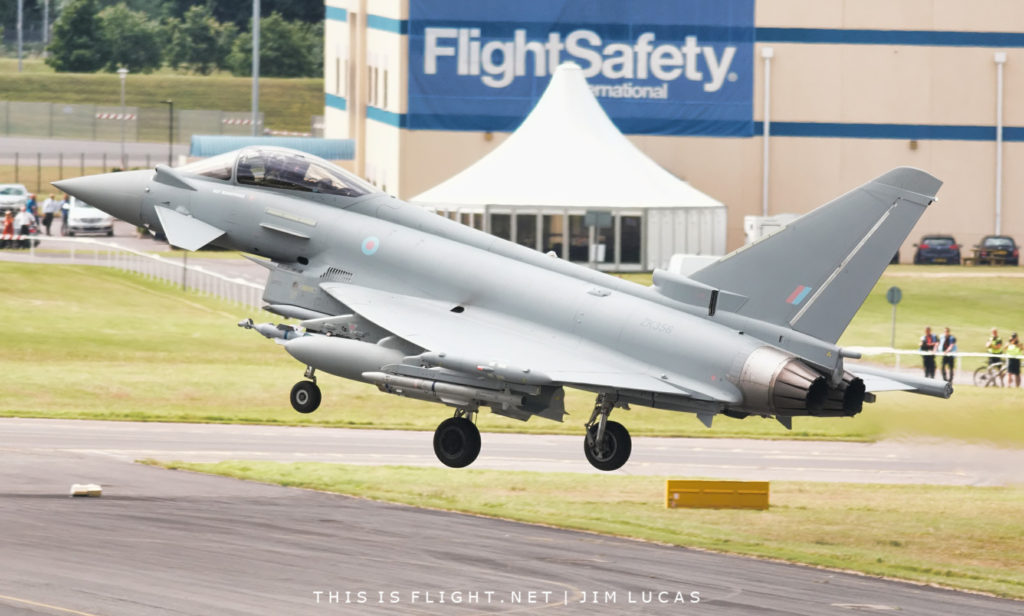 I was a little let down by the Battle of Britain Memorial Flight, who performed a flypast only. Again the premier UK displays came and went, a blink and you missed them. However, other WWII types, namely the P-51, P-40 and Grumman Bearcat gave top performances, the list of diplaying aircraft being very good. The Red Arrows gave us a flypast with an RAF A400M, much was uttered about this and the lack of display from the Reds.

The Global Stars, B-17 Sally B, the fantastic Great War Display Team, the DH Comet, Apache Gunship… the list goes on and on. All made it a fantastic airshow! Despite being arguably the most famous airshow in the UK, if not the world, it was disappointing to see no participation from front line RAF units. Some may say it’s a trade show in the main, but I do feel the impact of the CAA has had a dramatic detrimental effect on shows.

The show itself was full, plenty to see in the air and static display had plenty to see. The displays were limited to the centre of the airfield with most of the action at the 06 end, this gave a limited view and display to those at the 27 end.  Maybe that ought to have been explained to those attending to watch the show. Farnborough has a pedigree history, I fear the recent restrictions on flying will have a detrimental effect on future performances, this could impact on the public attendance. Many had purchased tickets in advance, social media was hot on the subject of the Red Arrows and the decision not to display. Likewise when the RAF Typhoon made its announcement that it would not attend. It’s fair to say that the local conurbation was a factor when deciding not to display.

Those that did attend and display were great, I’m sure that many were pleased with the aerial circus, facilities and abundant trade stalls. 2016 has brought a mixed bag for UK shows, the effects of recent impositions very clear. Under the circumstances, Farnborough managed to stage a very enjoyable airshow.