The Lincolnshire Aviation Heritage Centre is a privately owned and run museum set up by two farming brothers: Fred and Harold Panton. It has been built up as a memorial to Bomber Command and primarily as a tribute to their eldest brother Christopher Whitton Panton. Christopher was shot down and killed on a bombing raid over Nuremberg on 30/31 March 1944. The museum is a fitting tribute to their brother and those who died during the conflict. 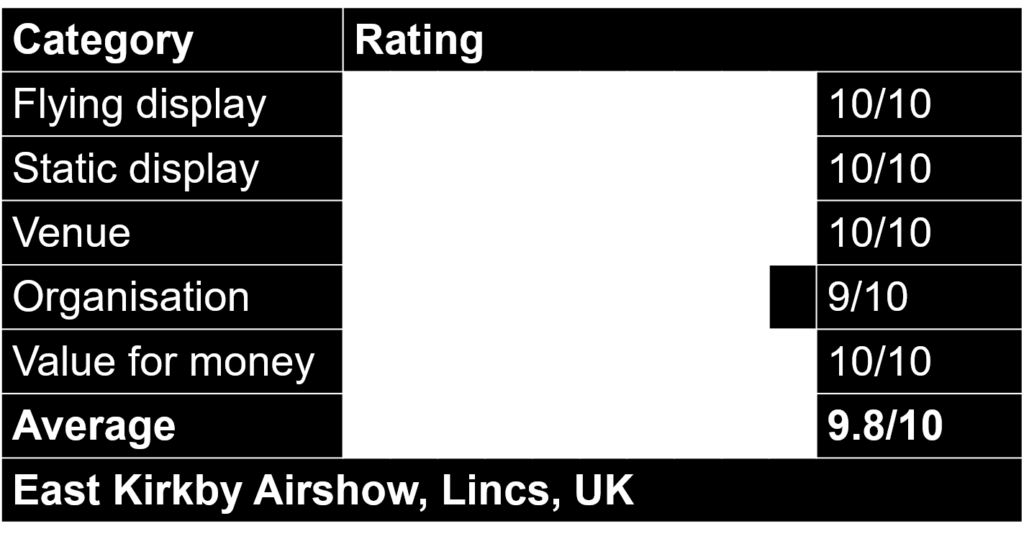 The museum’s main exhibit Avro Lancaster “Just Jane” was built by Austin Motors at Longbridge near Birmingham, in April 1945. Given the serial number NX611, she was one of the first 150 B Mk VII Avro Lancasters destined for the Far East in the RAF’s Tiger Force. Today, Just Jane is being restored by a team of dedicated volunteers at East Kirkby. It is the only place in Europe that you can pay to take a taxi ride in a Lancaster bomber. These events go towards the upkeep and maintenance of Avro Lancaster “Just Jane”, which one day it is hoped will take to the air. By supporting the airshow, you are getting closer to a second UK flying Lancaster. 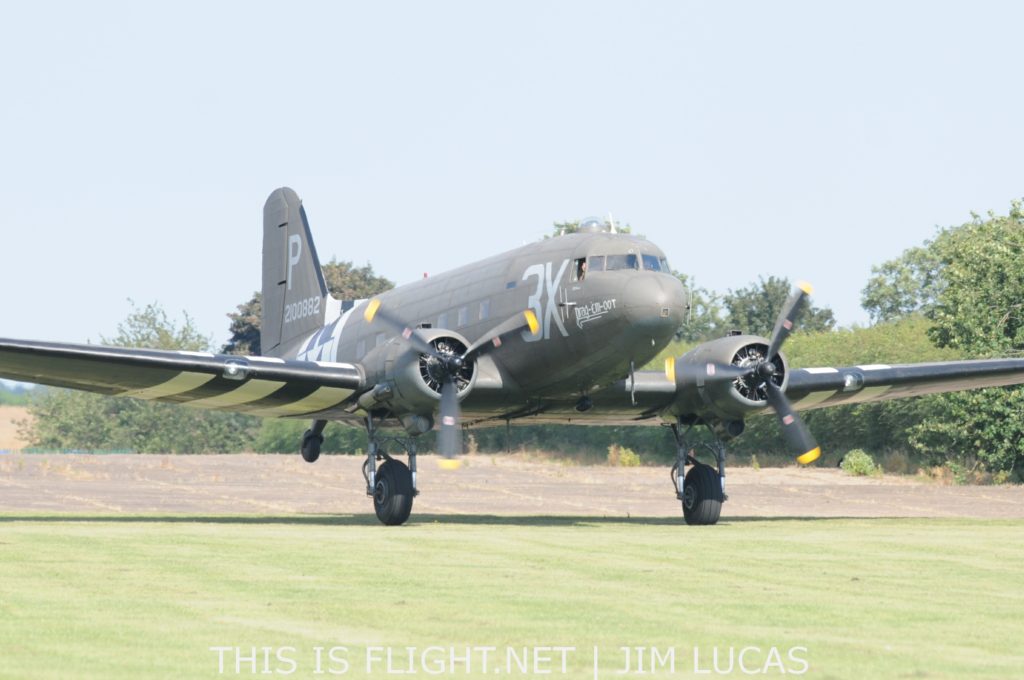 Primarily East Kirkby is a museum, but its runway is just long enough to host some larger aircraft for their annual airshow, including C-47 Skytrain “DRAG-EM-OOT” and PBY Catalina “Miss Pick-up”. The smaller airframes arrived to the show with ease, and with blue skies and light cloud, we were in for a great day. 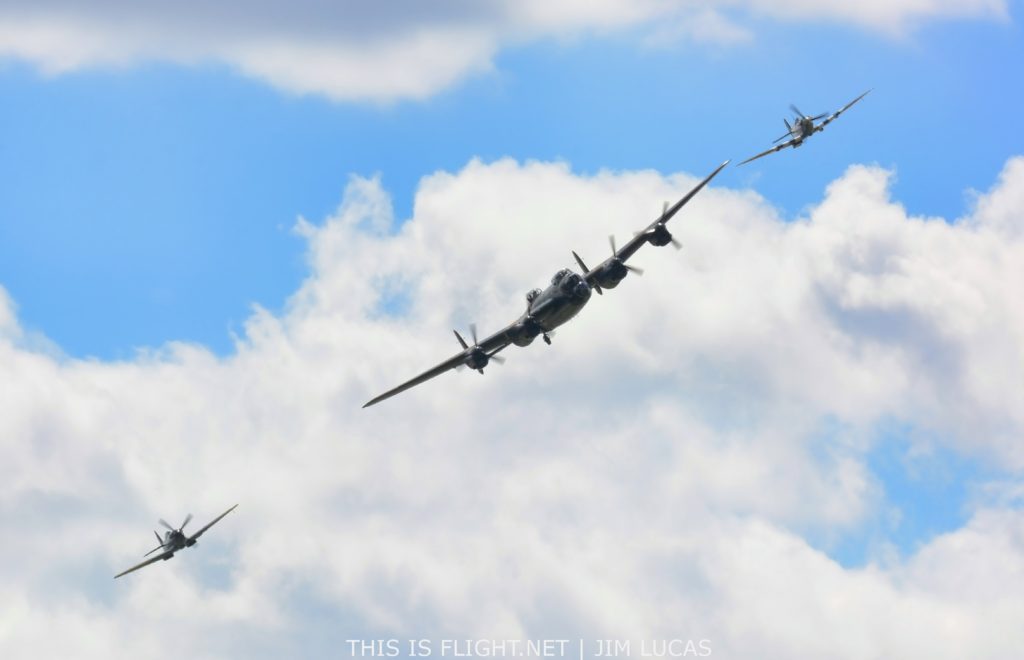 The show opened with the sound of six throbbing Merlin engines: yes, Thumper was back on the circuit! From above the hedgerow we saw the Battle of Britain Memorial Flight’s Avro Lancaster flanked by two Supermarine Spitfires. As they passed the crowd showed their appreciation by giving the BBMF a round of applause. 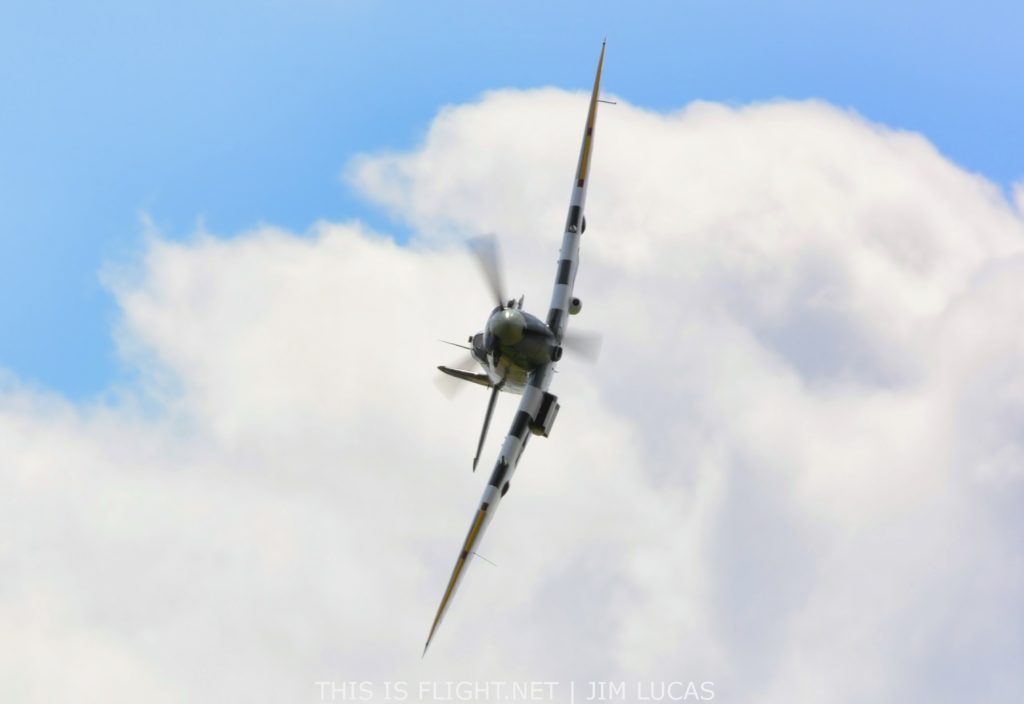 A number of passes were made by the trio before the Spitfires broke formation and the Lancaster went off into the hold. The Spitfire pilots then commenced their display. You may have seen in my previous reports that I had some criticism on the display from the BBMF Spitfires, but they certainly changed my view at this show. They graced the skies with a routine that was 100% up on what I had seen before. When they had completed their display, the Lancaster gave a number of flat passes, not yet having the Public Display Authorisation it requires to perform a full display. After so long off the airshow radar, it brought the crowds to their feet: the BBMF were back at last! 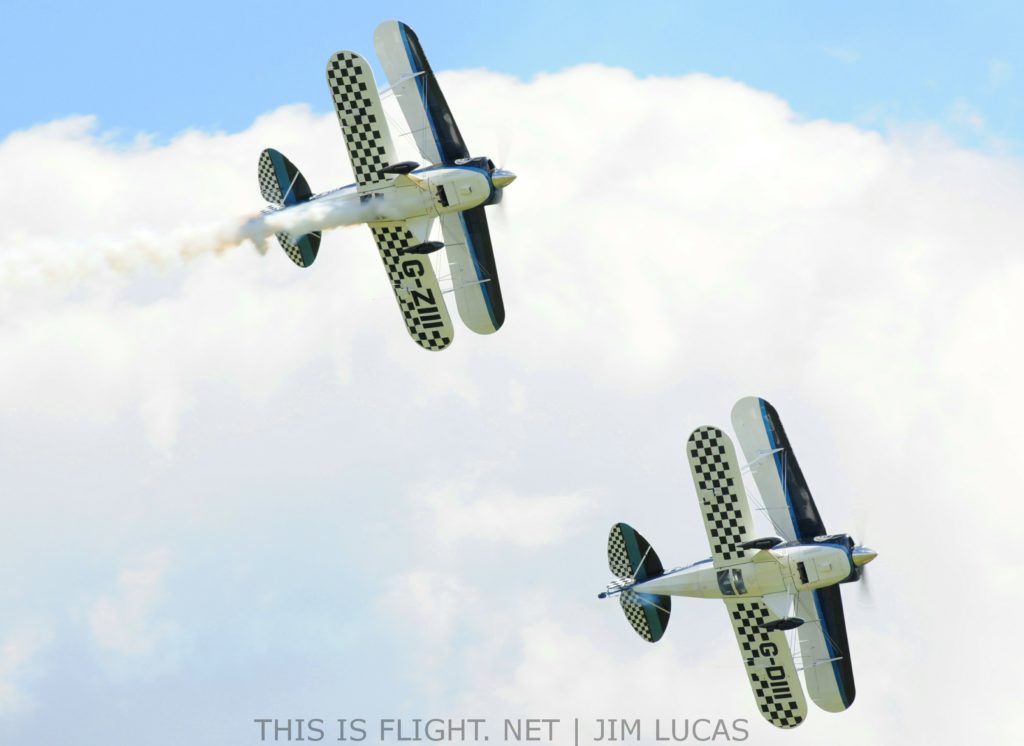 The Wildcat Aerobatic Team arrived and immediately commenced their display with their two Pitts S2B biplanes. It’s a pleasure to watch such a display, full of energy and excitement. Again the crowds applauded them at the conclusion of their slot. 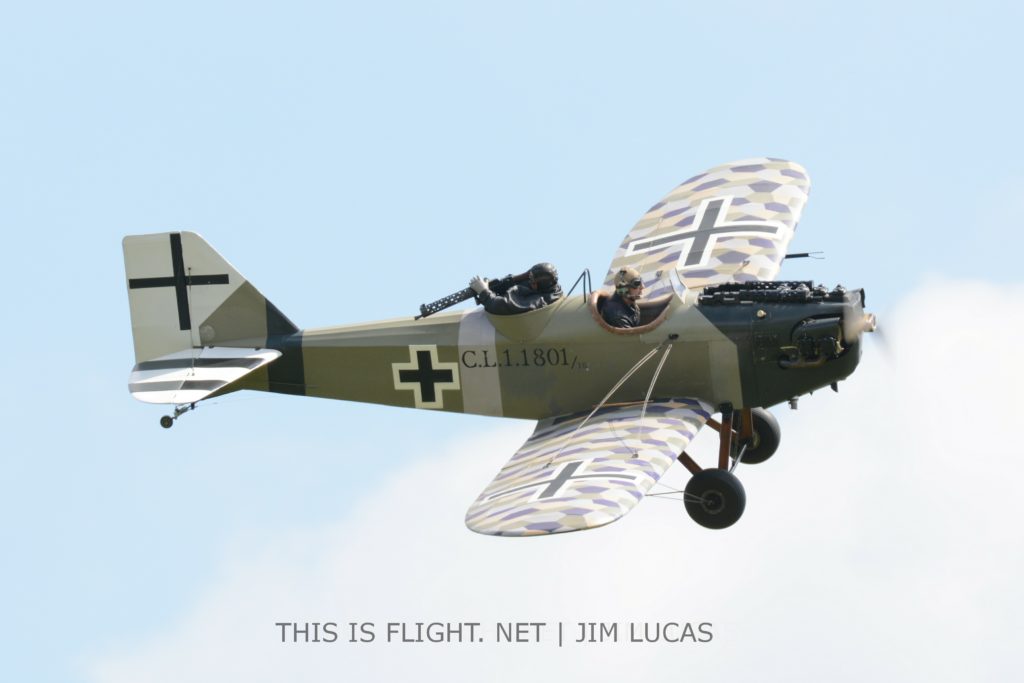 Now where do I start with the Great War Display Team? From arrival, to display to departing, they all gave 100%… and more. I was fortunate enough to speak with Pete Bond, the pilot of the Fokker DR1, who told of the handling characteristic of his aircraft. “It’s different, it’s a bit quirky … the Fokker is extremely slippery in yaw, and on my first flights with it, I spent most of the time just trying to fly the thing in balance”, he explained. We’ll have more of Pete’s interview in a separate feature later this year. The display was faultless; their depiction of a World War One aerial combat scenario is nothing short of superb. Their lineup of aircraft at the East Kirkby show comprised of the Fokker DR1, Junkers CL1, Royal Aircraft Factory SE5a, and Royal Aircraft Factory BE2c. Flying these machines into strong head winds and the like is very problematic – hats off to these guys for what they achieve. 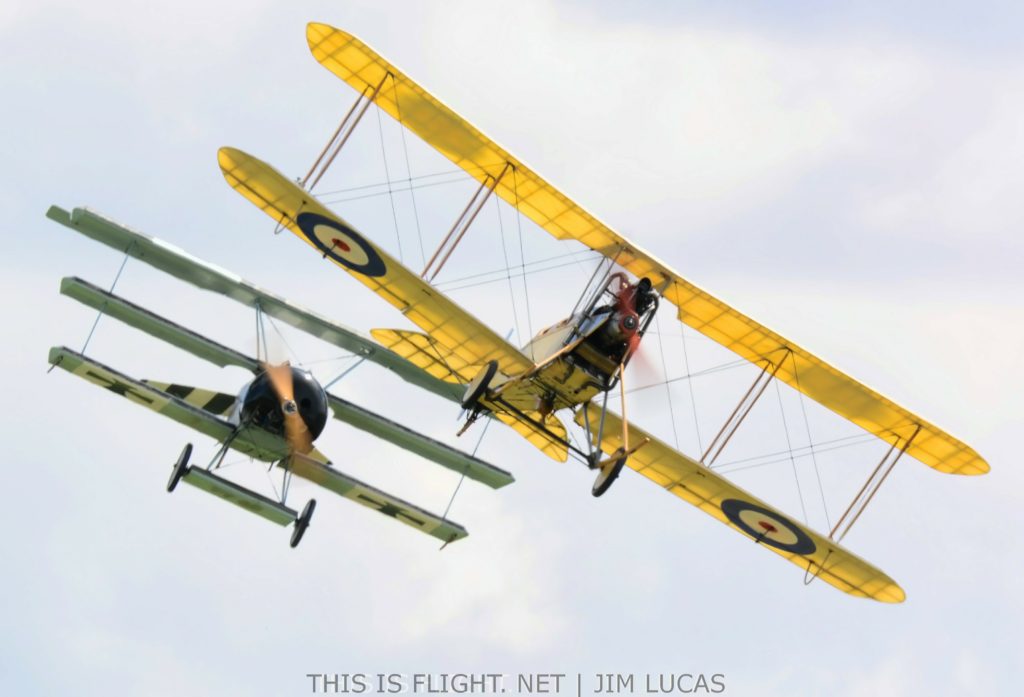 The Calidus Autogyro was next up, flown by Pete Davies. This always reminds of James Bond, albeit a newer version. I was amazed at how he threw this machine about, making it look simple. We see displays from others with loops and rolls, all high above us; this display does all of that within the confines of crowd centre – perfect for smaller venues like East Kirkby. It’s hard to imagine that Autogyro’s where invented by Juan de la Cierva, only 20 years after the Wright Brothers first flight, in an attempt to invent an aircraft that couldn’t stall. 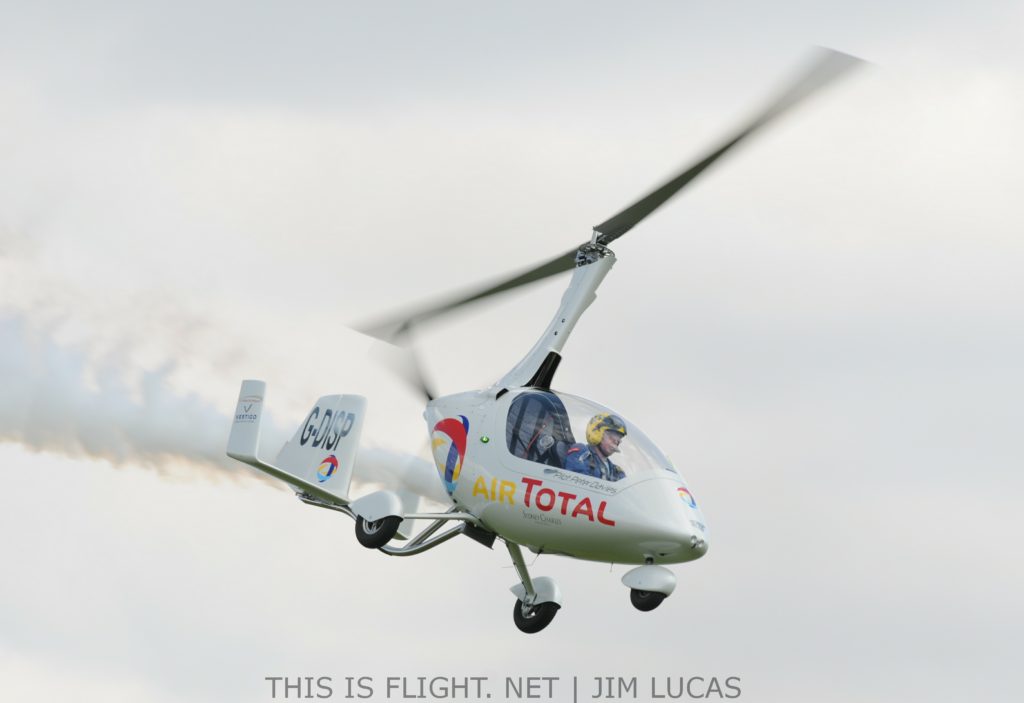 Captain Neville’s Flying Circus is a throw-back to the barnstorming days of old, very reminiscent of the movie “Those Magnificent Men in their Flying Machines”. Tiger Moths, Chipmunk, Jackaroo and Piel CP-301B Emeraude all took part in a leisurely game of cricket, with the aircraft attempting (unsuccessfully) to bomb the wickets. We then saw the streamer cut, which several of the aircraft managed. The best part of their show was the limbo; the aircraft fly under a bunting suspended between two poles, 11ft high and 16ft wide. With only 3 feet of clearance around them, the pilots demonstrated their skills to conclude a very entertaining routine. 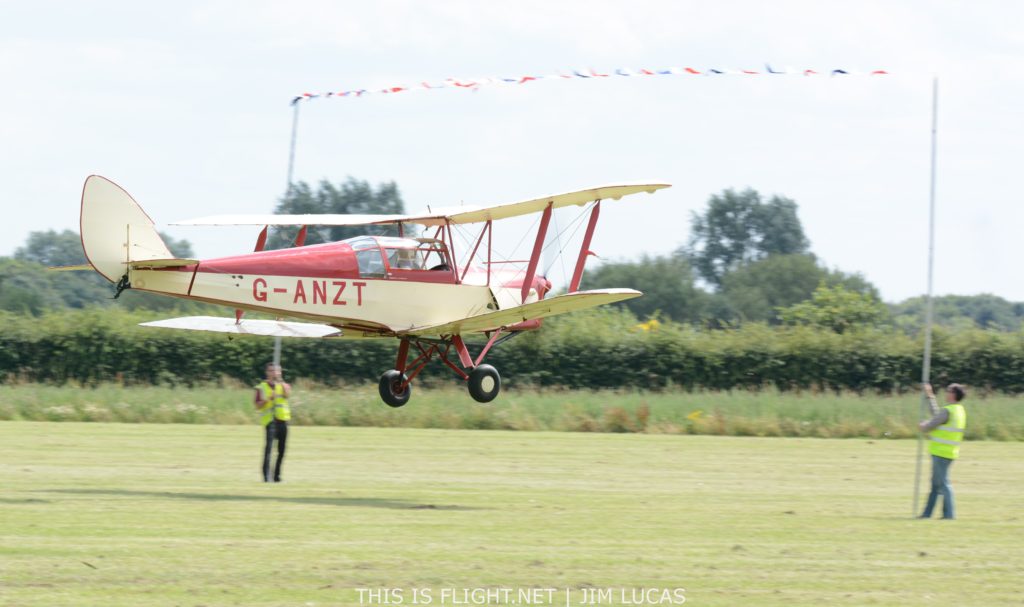 The North American P-51D Mustang “Janie” was up to display next, and the sight of a P-51 is still one that brings a sense of awe. Its classic lines, the sense of power and the ability for it to give a thrilling display is something that I think many would agree is nothing less than epic. This particular airframe didn’t see action in WW2; built in July 1945 it went to New Zealand where it saw service until 1955. Once in storage it went through a number of owners until 1997, when it was brought to the UK for restoration. Stunning aircraft, stunning display. 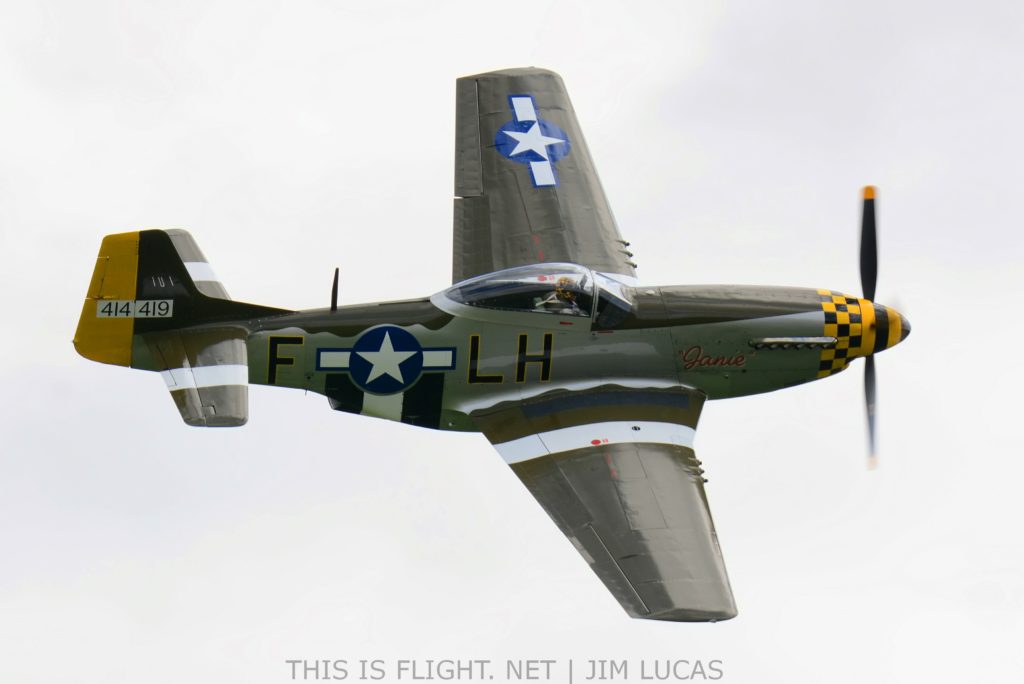 Aerial displays by the kit-built Vans RV-8 and Rihn DR-107 provided high octane sky dancing. Both pilots showed their own abilities and those of the aircraft they were flying. Hawker Hurricane R4118 is a true war hero from the Battle of Britain, arriving in style with a low approach before starting its display. It made numerous passes, including some fantastic topside shots. R4118 was delivered new to 605 Squadron in August 1940 and went on to fly 49 operational sorties during the Battle of Britain, shooting down five enemy aircraft before being shot down itself. British software entrepreneur James Brown is R4118’s new owner, ensuring that this unique combat veteran remains in the UK, its true home. 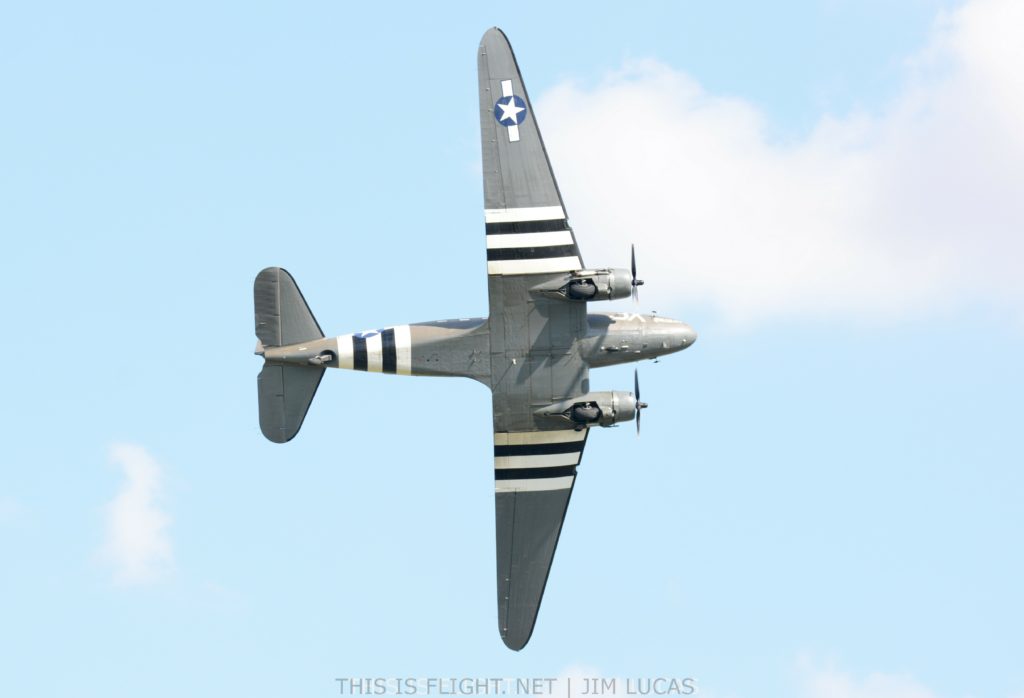 Next to take to the skies was the C-47 Skytrain. Delivered to the USAAF December 1943 and assigned to 9th Air Force Troop Carrier Command (E.T.O), C-47 “DRAG-EM-OOT” Flew to the UK in February 1944 to take part in the D-Day landings. Resident at the Heritage Museum, it is rarely seen at other airshows. Meanwhile, a Bucker Bu .181 Bestmann display came from an example produced at the Heliopolis Aircraft Works in Egypt. It was produced for the Egyptian Air Force as the Heliopolis Gomhouria (meaning “Republic”), but today it has been painted in the scheme used by the Luftwaffe during WWII. Built as a trainer for the Luftwaffe, the type also performed other duties such as courier & liaison. From March 1945 an order was issued to concentrate all the available Bü 181s to be converted either to the “tank busting” role carrying four Panzerfaust anti-tank grenade launchers from wing-mounted launchers (C-3 subtype), or to the night harassment role carrying three 50 kg bombs (B-3 subtype). The display showed the agile capabilities of the aircraft. 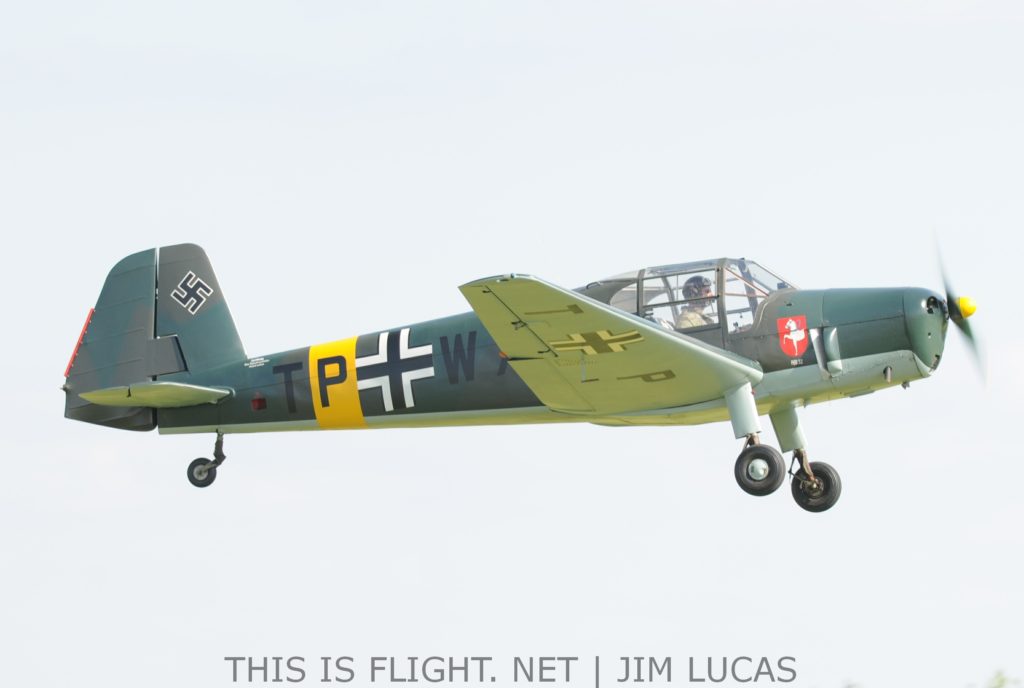 Plane Sailing closed the show with their Catalina. This specific machine was actually ordered for the Royal Canadian Air Force as a Canso A amphibian, basically equivalent to the US Navy PBY-5A. I had the opportunity to speak with the co-pilot for the day’s show, Matt Dearden. Matt’s day job is flying PC-6 Porters into remote tribal airstrips in Indonesia, but he flies the Catalina in his spare time. Matt gave an insight into flying this mighty aircraft, which you can read in this separate feature. From take-off to landing the display was flawless, and the passes showing the aircraft in its different configurations were brilliant. 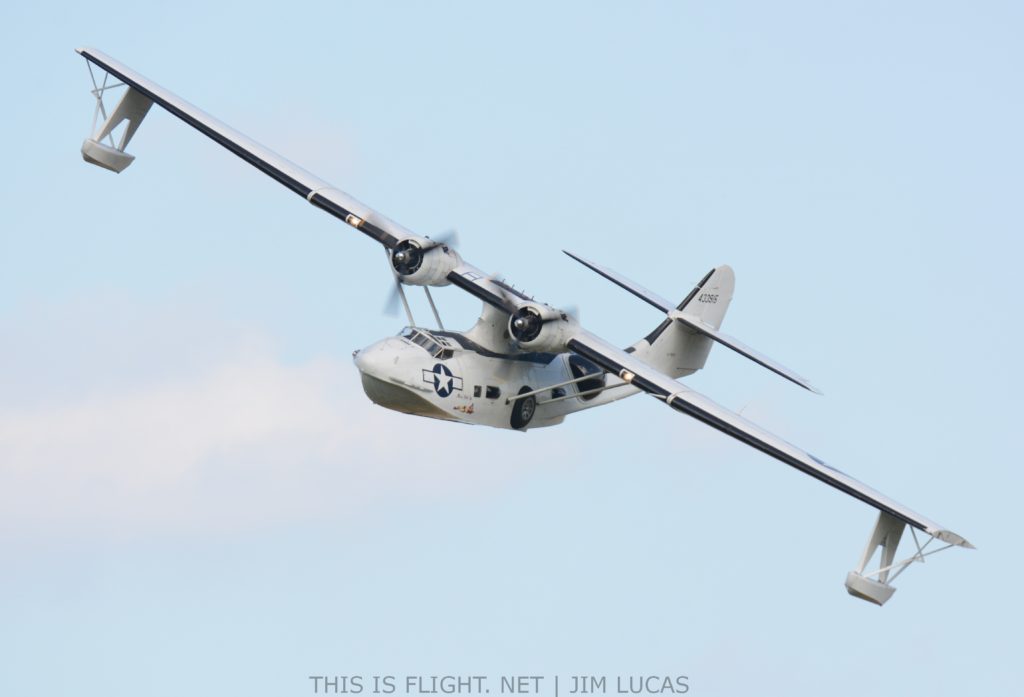 East Kirkby is one of those airshows that you really didn’t ought to miss, it’s small by comparison to many other shows in the UK, small yet it packs a punch. With plenty to see and do, I have to say that it was one of the best shows for me this season. With a sellout crowd of only 5000, you got the sense that it was a family show – many sat with picnics, the car park only a short walk enabled spectators to enjoy the day at leisure. My ratings for this show are based on what it had to offer by way of static, flying and entertainment. It cannot be compared to the big UK shows: it’s a family event for the public and to raise funds for the Heritage Centre. 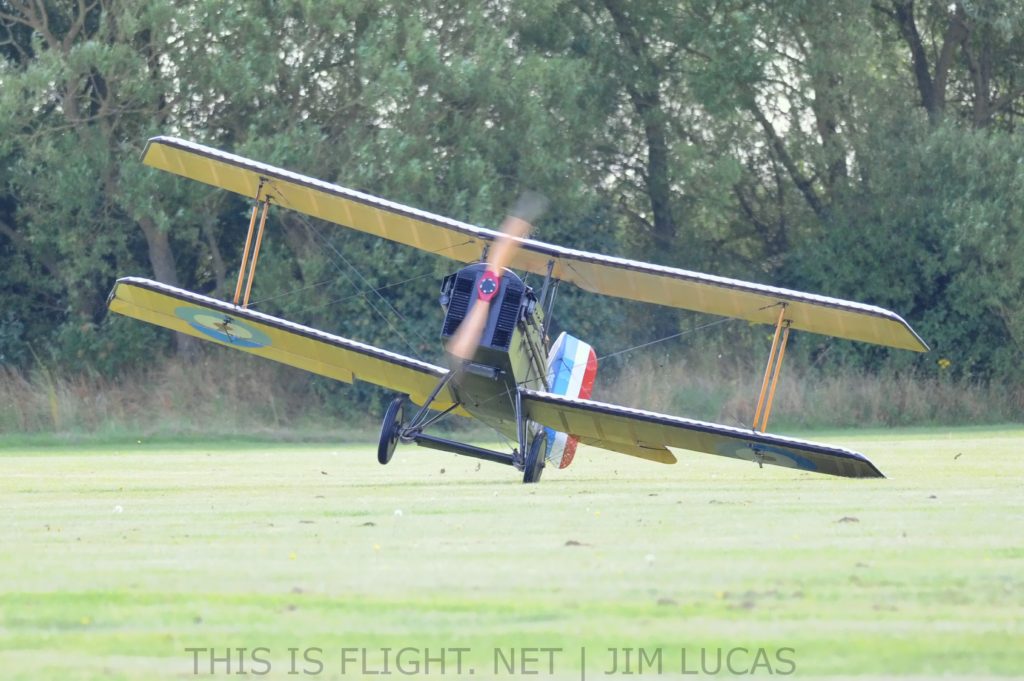 The close proximity to the machines was fantastic, as was the aroma of avgas. From start to finish there was plenty going on, from large scale RC aircraft to taxi runs by ”Just Jane”, all of which added to the day. On such a hot day the organisers even had the foresight to send a member of staff down the crowd line selling bottles of water: they saw the danger in the heat and responded to it. How many show do you see that?

Entrance for me was fine, but the location of the airfield in a small village meant that some reported difficulty (one point has been deducted from the “organisation” criterion due to some visitors telling of long queues before the flying display began). The exit at the end took me 5 minutes – no hassle. 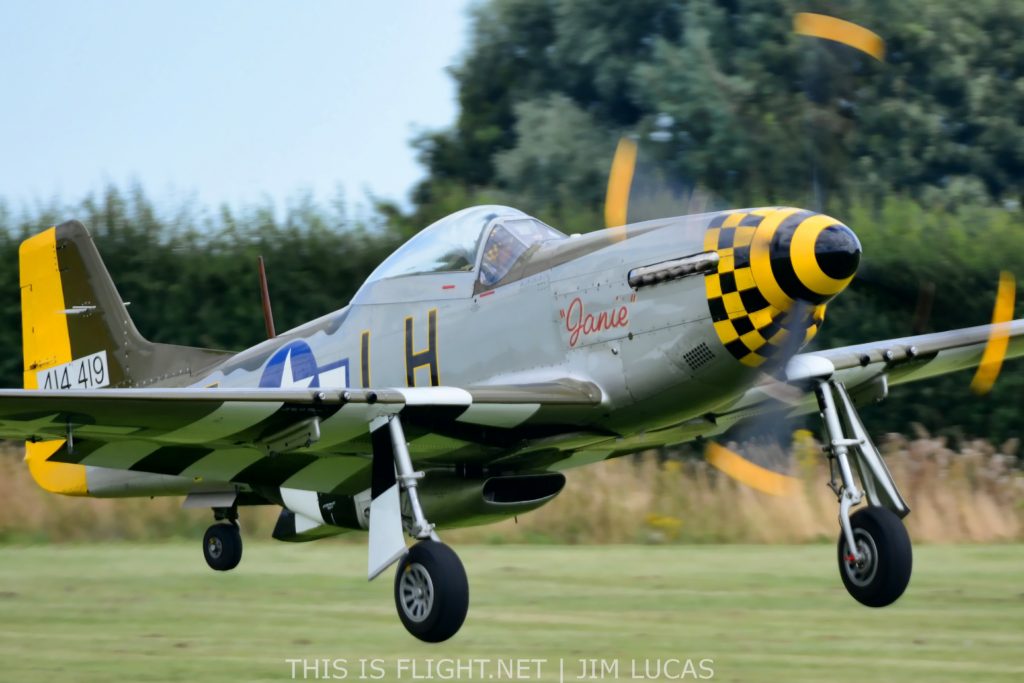 I have scored the airshow based on what it was about, what it had to offer for what was paid to gain entrance. It is a high score, but worthy. I have also taken into account the views and opinions of others, who I talked to during the day. None of those who I spoke with had any negative feedback. Some were sons and daughters of pilots and aircrew from WW2, for them the memories was nothing you could give a score. Young and old enjoyed a day of great nostalgic and modern aerobatic flying.