Now in its 11th year, Bray Air Show was held on the 23/24th of July, with an approximate attendance of 150,000 people, over the two day event, sponsored by the Irish Aviation Authority, Simtech and Bray Local Council. The aircraft for the event were based at both Weston and Baldonnel airports. On the previous Thursday before the event, the Frecce Tricolori flew over Dublin city centre, as part of their arrival into Baldonnel. 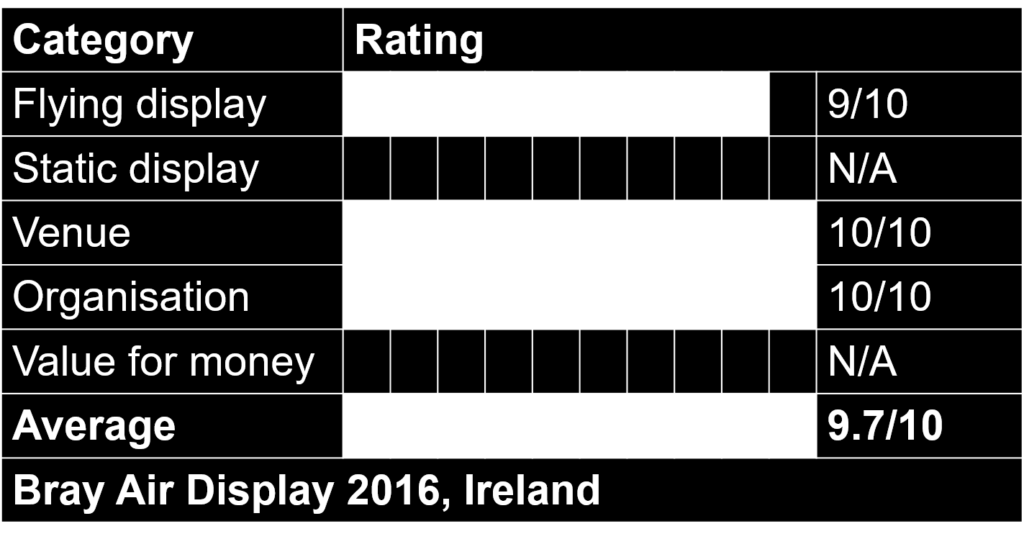 The weather on Saturday was rather dull, combined with what appeared to be a rather distant display line, led to challenging conditions for photographers, as well as the cloud base leading to a flat show for the Frecce, which did not show off their finesse in full style. 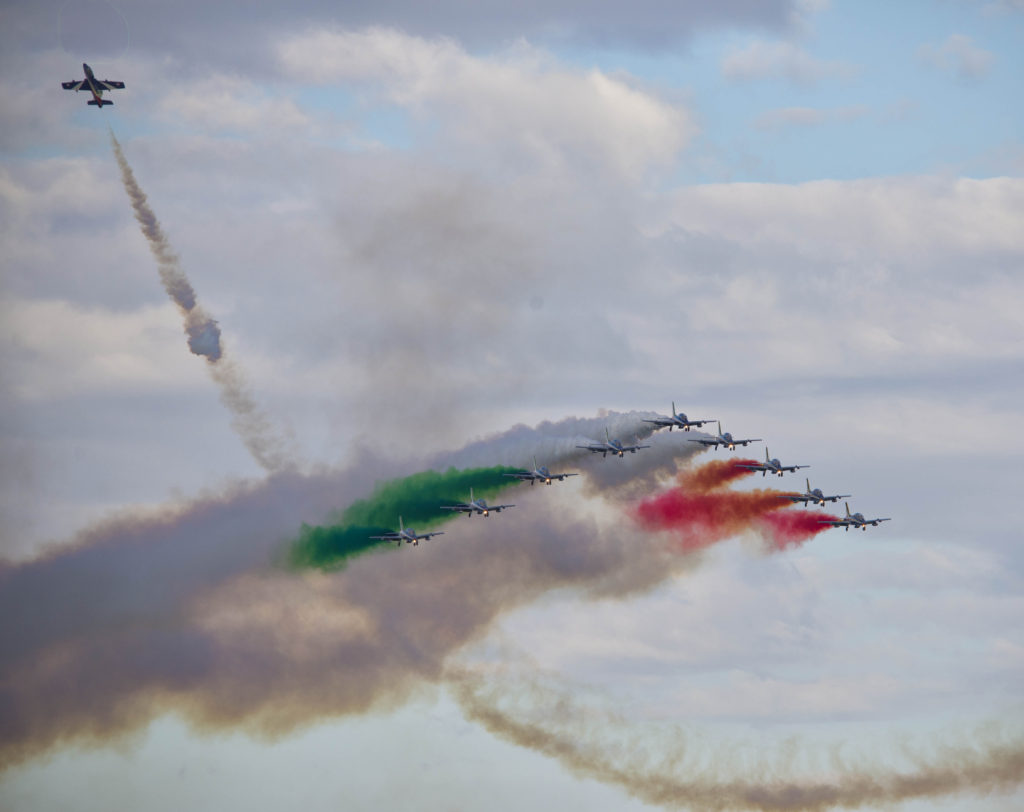 Frecce Tricolori displayed on both days, with the Red Arrows on Sunday only. Photo: Paul Kolbe

Team Raven, who are now a 6 ship display, put on a very impressive display, and their tight rolls and loops, along with their white aircraft can always be seen against a grey sky. 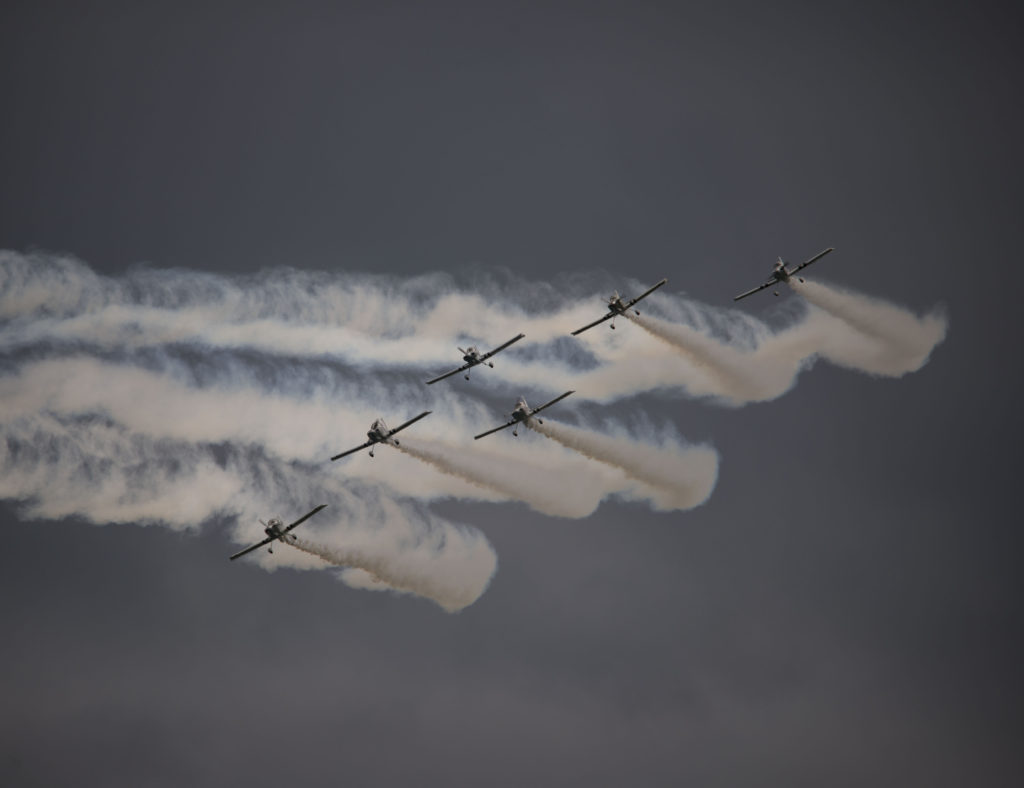 Sunday proved to be the better of the two days, in terms of weather, and closer display lines. The Red Arrows arrived crowd rear to open the show, but again the low cloud had not improved enough, and had to proceed with a flat display. 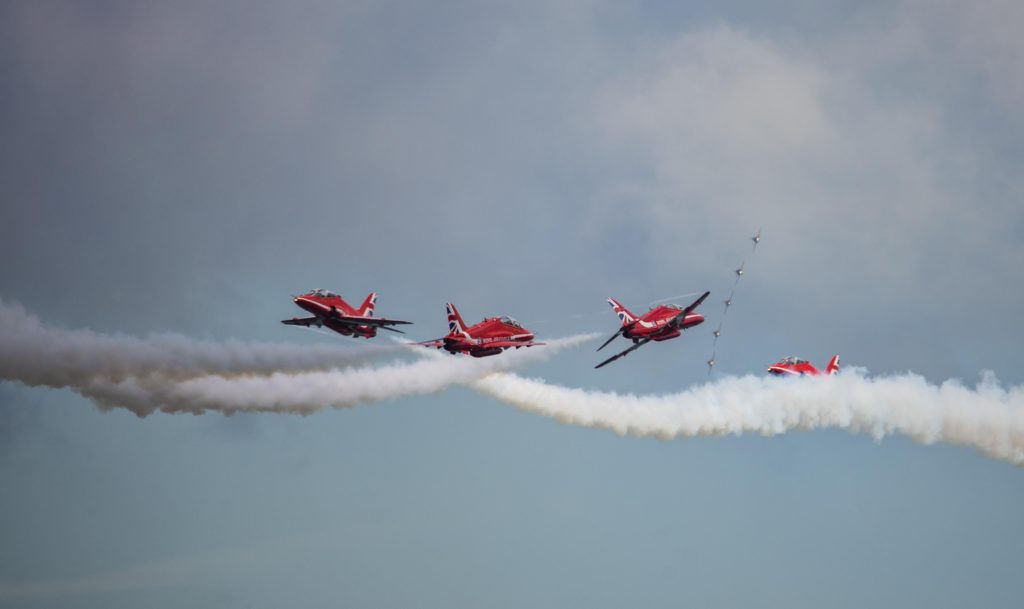 Reds 6-9 perform the Gypo Pass, with 1-5 preparing to run in behind them. Photo: Paul Kolbe

Blue skies were appearing and apart from a small shower halftime during the show, the rest of the show was basked in sunshine. The Irish Coast Guard S-92 provided a winching demo with a lifeboat on the Saturday and a number of passes on the Sunday. 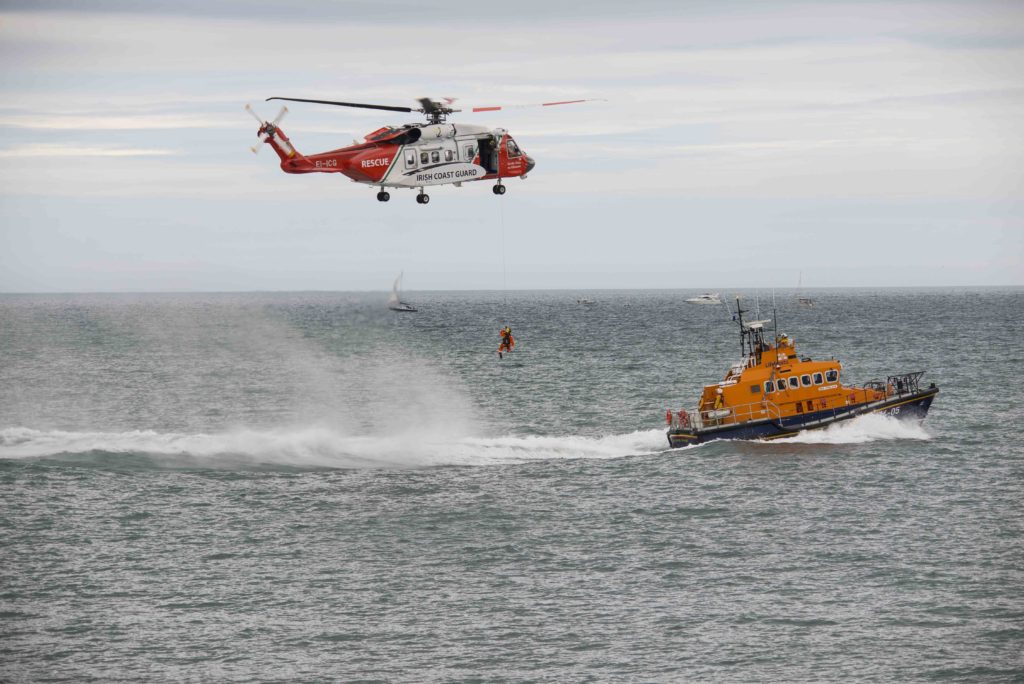 Once a familiar site in Ireland with the Irish Air Corps, The Fougas of  Patrouille Tranchant displayed the aircraft off in some very graceful formation aerobatics, ending with the colours of the Irish flag (green, white, orange) from their smoke systems, which was very well received. 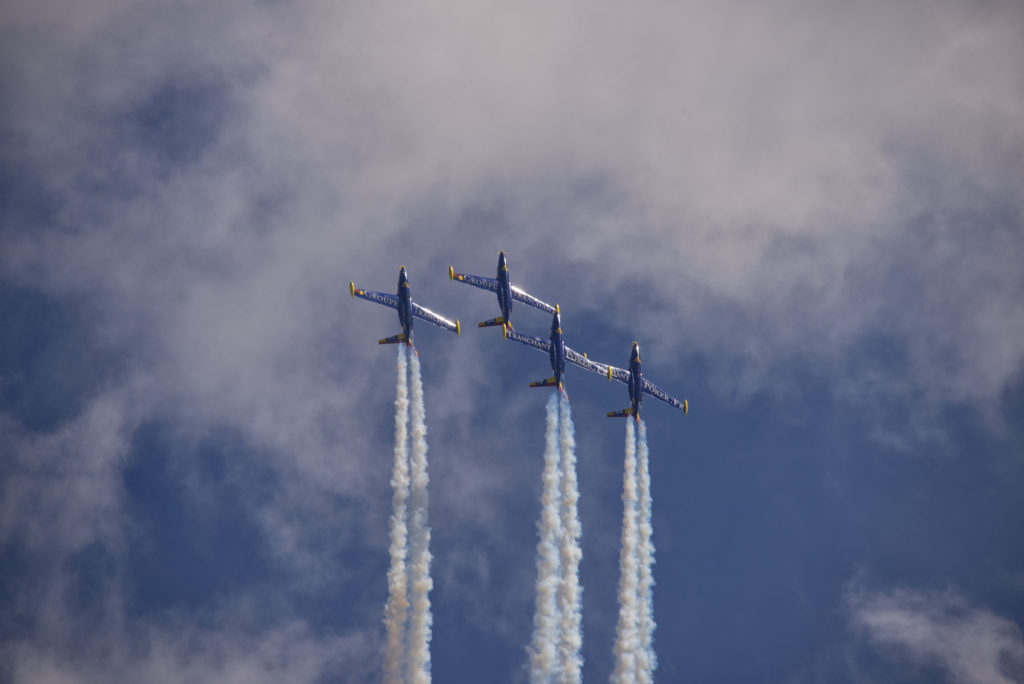 Patrouille Tranchant are rarely seen at airshows, including in their home country of France. Photo: Paul Kolbe

Now on the local scene for a number of years, the Irish Historic Flight joined the Aer Lingus Charitable Foundation DH-84 in a number of formation flypasts; the addition of a smoke system to the three Chipmunks is a nice touch, and possibly a first for the type. 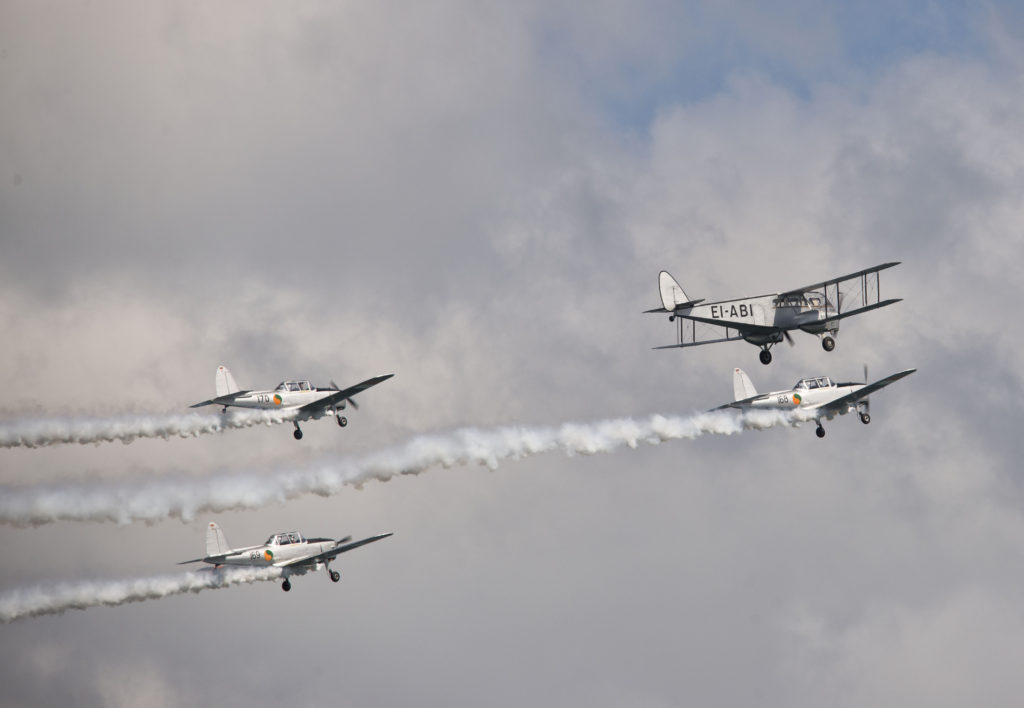 The Breitling Wingwalkers are always a crowd favourite and they did not disappoint as always, the two young ladies strapped on top of the wings are reminiscent of bygone days, with the addition of smoke and vibrant coloured aircraft. 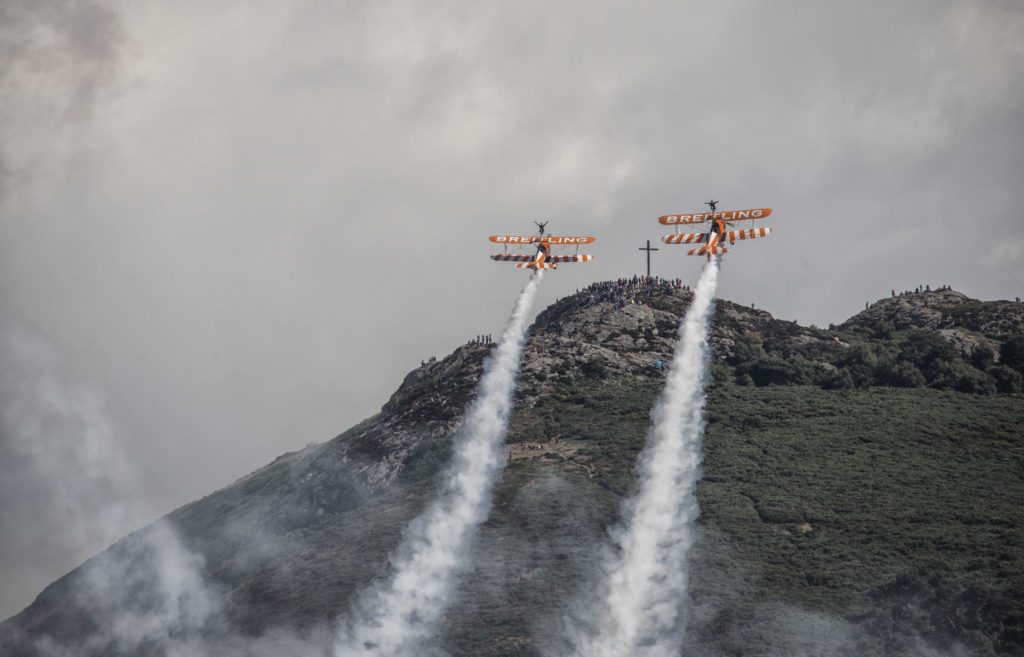 The Wingwalkers are popular performers at seafront airshows, usually with their pairs display. Photo: Paul Kolbe

The TRIG Team in their brightly coloured Pitts, gave the crowds a demonstration of how agile their aircraft really highlighted by their smoke. The Irish Air Corps displayed two fixed wing types, the Pilatus PC-9 and the Reims Rocket. The 4 PC-9’s flew in tight formation, and this year are equipped with a new smoke system, as part of the Easter Centenary. Towards the end of the display a solo PC-9 breaks away for a solo display, and highlights the agility of this modern trainer. The finale comes with a crowd break of the remaining aircraft towards the crowd. 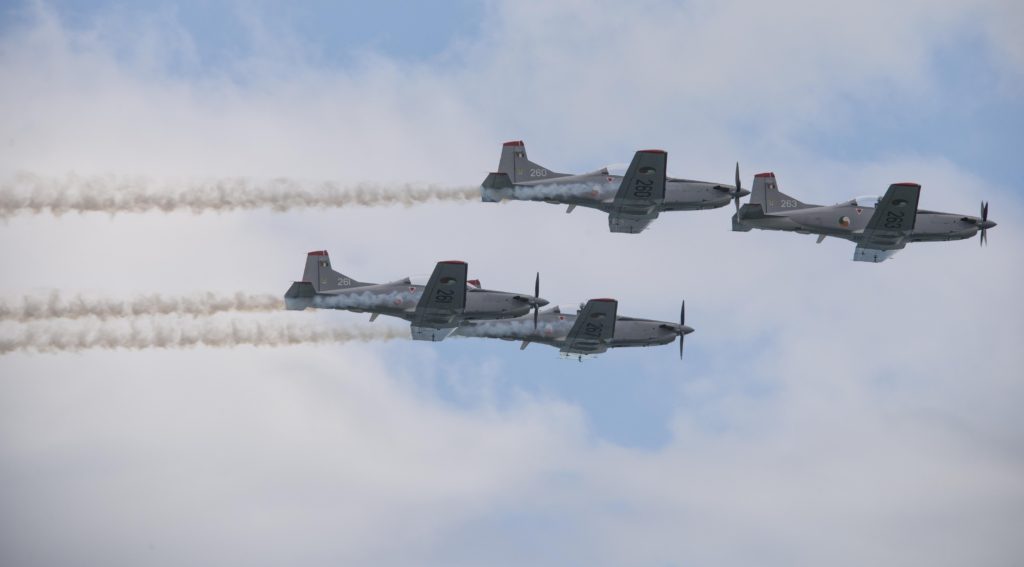 Flown at Bray for the last time were 3 Reims Rockets, for anyone not aware of the type, these are French built Cessna 172,s but with additional differences. These aircraft were purchased in the early 1970s and have performed many different roles over their time with the Irish Air Corps Reims Rockets last time in Bray 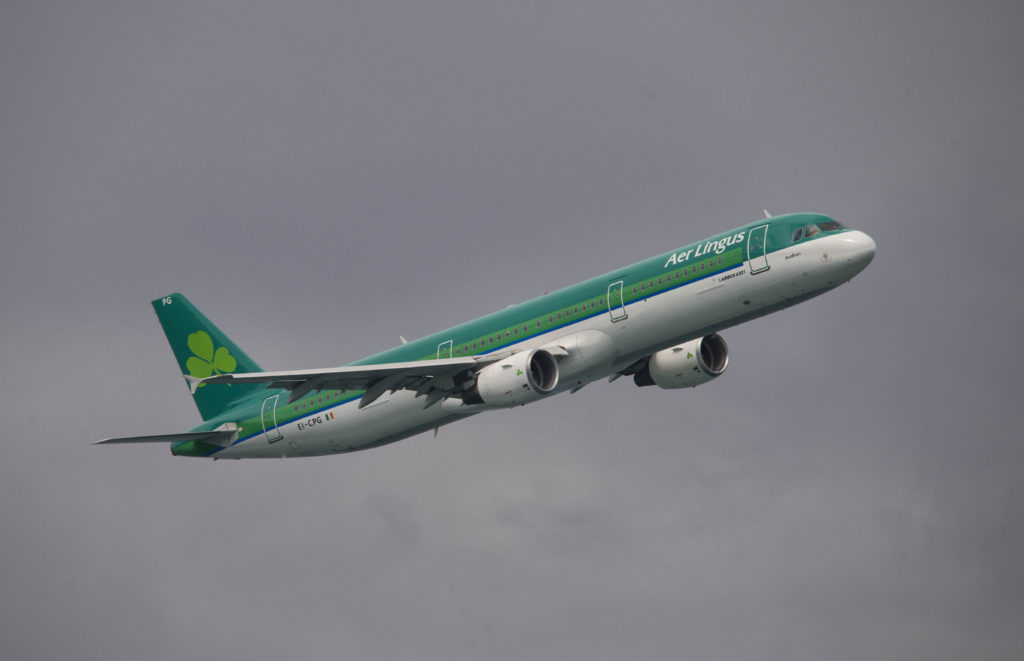 Airliners were in attendance, with Cityjet providing their newly delivered Sukhoi Superjet, and Aer Lingus doing a number of flybys with an Airbus A321.

The Swedish Air Force Historic Flight brought their Draken and Viggen to fly on the Sunday – both were pure power and noise. The Viggen stayed a little far out for the majority of the display, but the Draken, was less of a distance and allowed itself to be caught on camera. 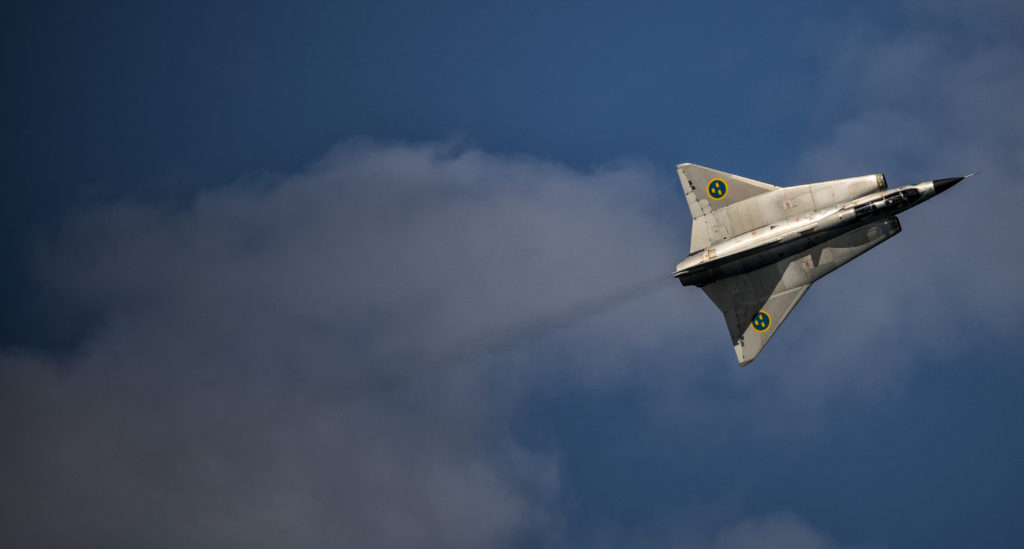 A very special visitor in the form of the Grace Spitfire paired with its Seafire sister was flown with poise and purpose, spitfire ML407 is no stranger to Irish Skies as it was once an Irish Air Corps aircraft serial 162.  In fact I believe it is possibly 30 years since this aircraft was in Ireland as it was flown into an Irish Airshow in 1986. The pair gave an extra 5 minutes on the Sunday just to hear the beautiful Merlin. 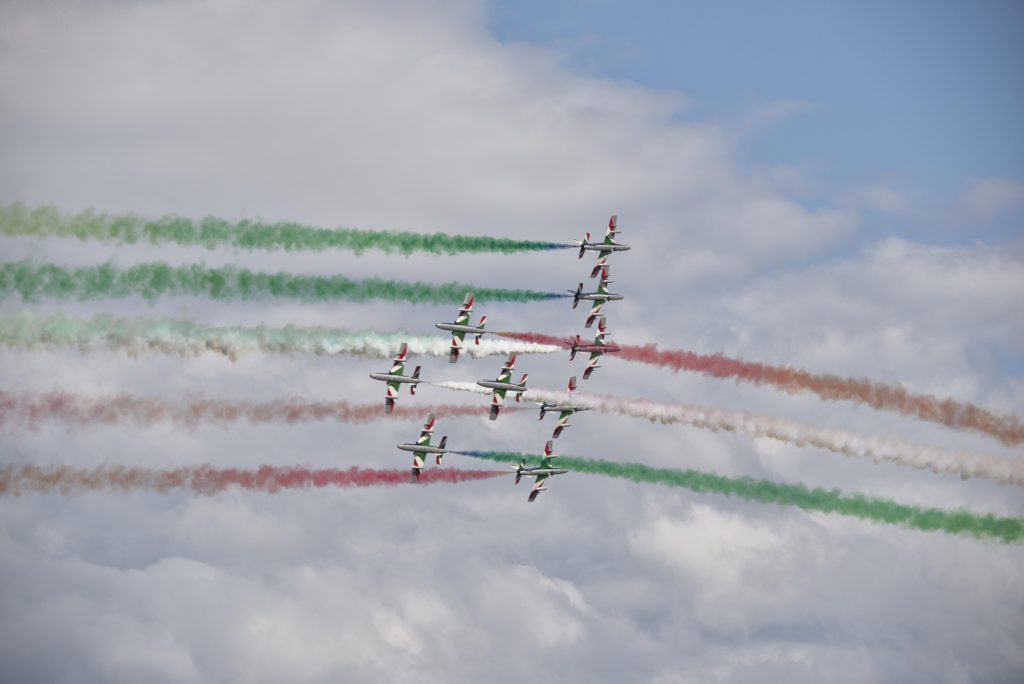 One word can only describe the last display by the Frecce Tricolori – “Bellisimo” – as they had blue skies and wowed the crowd with rolls, loops and crossovers. In conclusion, fantastic show made up by the stunning weather, and the pure variety of aircraft.

Paul Kolbe is a photographer and journalist based in Ireland.