The immaculate F-16s of the USAF Thunderbirds are quite possibly some of the most recognised aircraft in the world. Known for their precision flying and death-defying crosses and having flown for over 300 million spectators since 1953, their reputation worldwide is second-to-none, in part due to their frequent trips beyond US borders. We caught up with Thunderbird 5, the Lead Solo Jason Curtis at Wings Over Houston 2015. 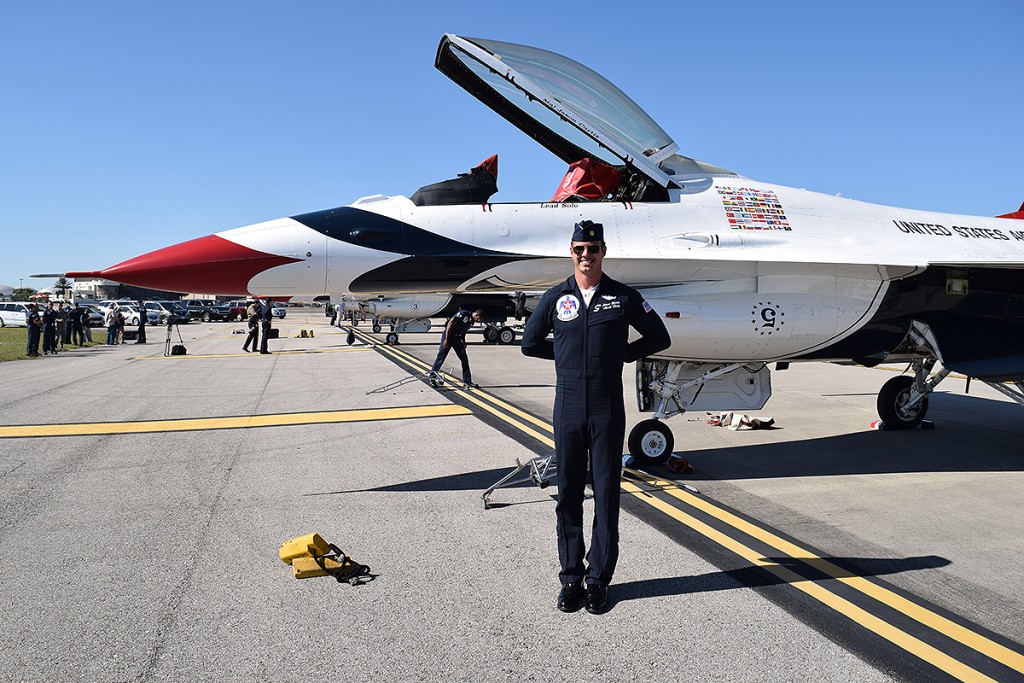 Thunderbird 5, Jason Curtis, poses for a photo beside his F-16 before Wings Over Houston. Photo: Nathan Thompson

“We have six demonstration pilots on our team, and we have had three female demonstration pilots since 1953”, Curtis explained. But like any other aerobatic team, there is far more to the show than the pilots: an additional six officers provide commentary, organise logistics and administration, among other important tasks. Additionally, the 24 members of the “Show Line” are responsible for keeping the aircraft properly maintained, and other team members even include a non-military airshow coordinator, responsible for building the airshow calendar. 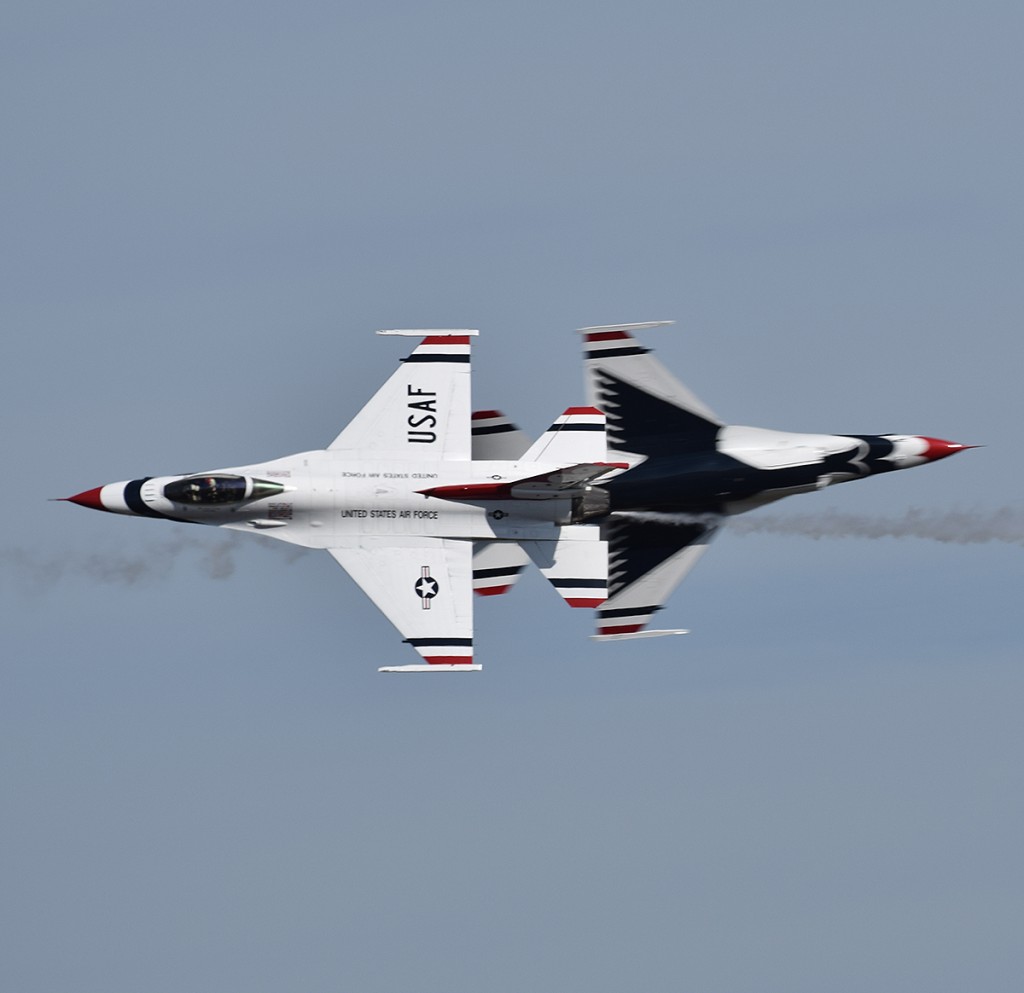 An opposition pass from the two solo pilots, Thunderbirds 5 and 6. Photo: Nathan Thompson

Back in the air, the pilots are constantly faced with the challenge of manoeuvring six state-of-the-art fighter jets, flying at hundreds of kilometres per hour, as little as half a metre apart. “I think one of the biggest challenges is just the level of concentration that it takes to put on the show” explained Curtis. “The formation flying that we do is sometimes as little as just 18 inches apart, to some of the max-performance manoeuvres that we do, where we get on the outside edges of the performance envelope of the F-16. It requires a great deal of concentration.” 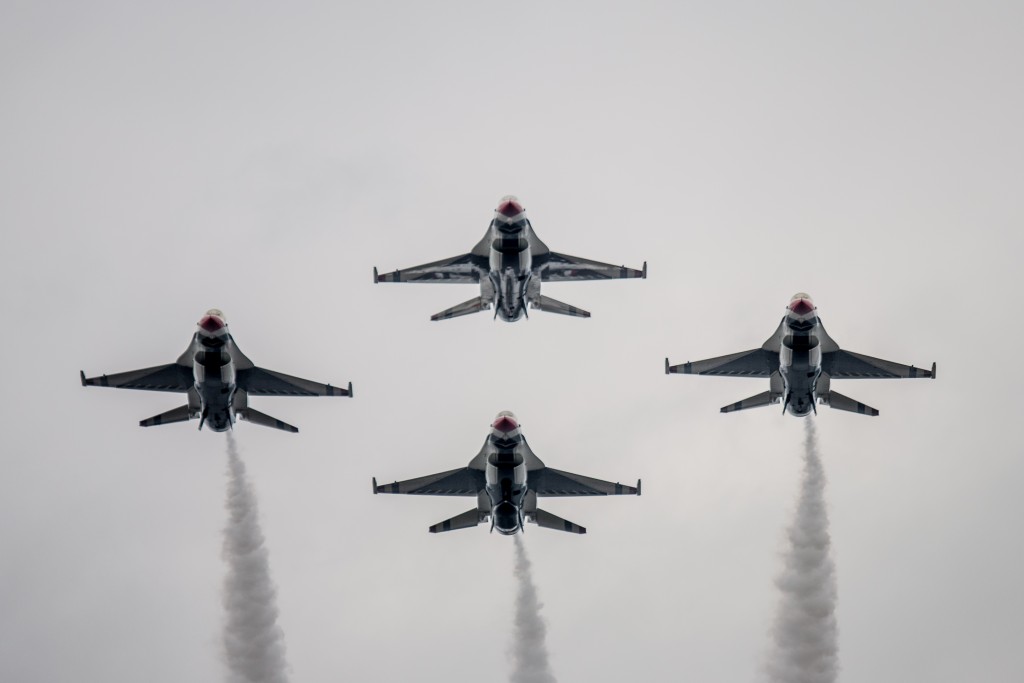 The Diamond pilots approach from crowd rear for their display at Keesler 2015. Photo: David Leadingham

And Curtis’ favourite manoeuvre? “As the lead solo I get the honour of performing the sneak pass, which we call the ‘Tactical Surprise’ – definitely my favourite manoeuvre. It is a manoeuvre where we try to draw the audience’s eyes into a graceful manoeuvre performed by the Diamond pilots, and then I’ll drop in just above the treeline, just below the speed of sound and hopefully get your heart rates up a little bit!”

“I’ve seen a lot of jet demonstration teams”, Curtis continued, “and they all amaze me. I’m truly impressed by every single one, What makes us a little bit different is just our approach to the show. Something that we Thunderbirds like to highlight with our show is that it is a very tightly choreographed show: there is going to be something in front of your eyes at all times for about 40 minutes straight.” This is where both the Thunderbirds and Blue Angels differ from most other jet teams, with solo, two and four-ship manoeuvres alternating for most of the display being favoured over the more common European style, which would see two distinct halves: one with all the aircraft performing loops, rolls and formation changes in front of the crowd, followed by a more dynamic second half. 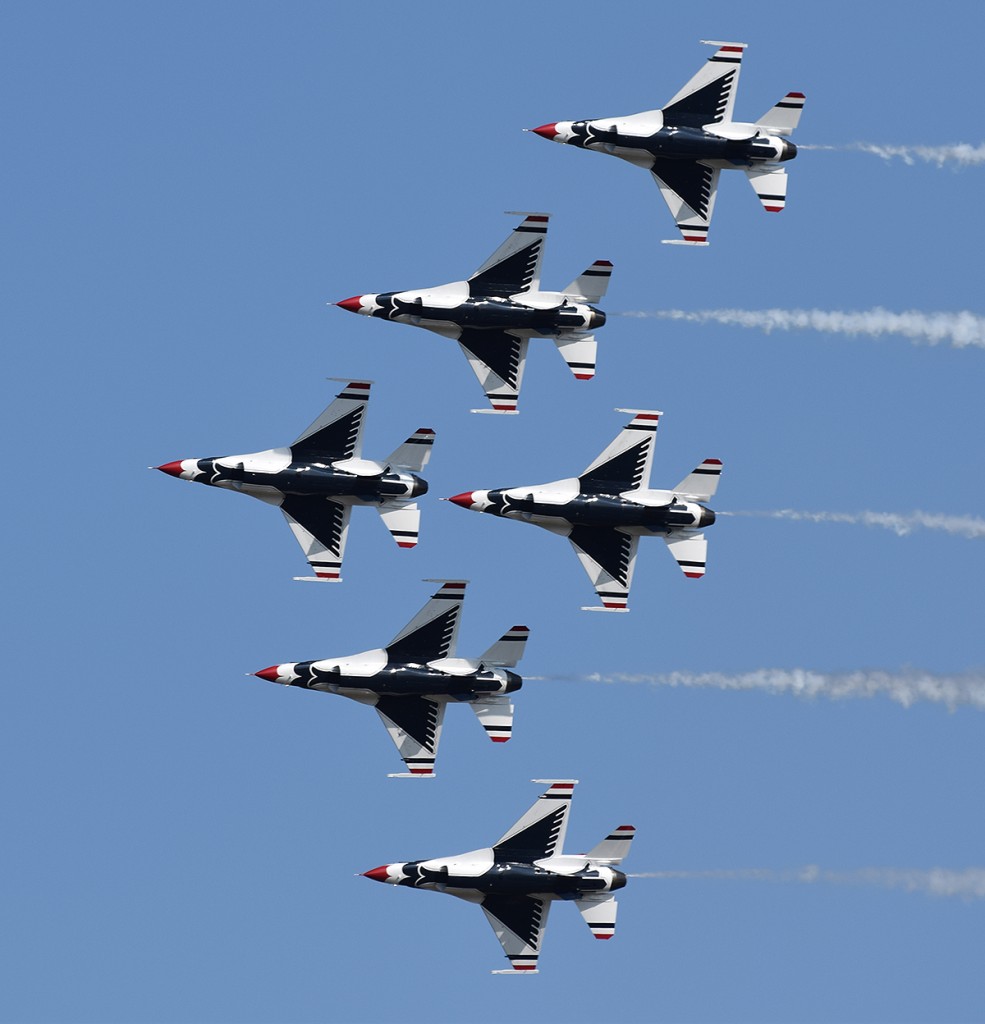 All six aircraft join up in formation to end the display. Photo: Nathan Thompson

It has not been since 2011 that the Thunderbirds last performed outside North America, when they toured Europe, but Curtis confirmed that at least one foreign trip had been planned for 2013’s season: a tour to the Asia-Pacific region, visiting countries such as Singapore, which hasn’t seen a Thunderbirds display since the 1980s. This plan was pulled due to the sequestration cuts that year, leading to all US military airshow participation being cancelled, but Curtis hopes that they can re-schedule the tour in the near future. 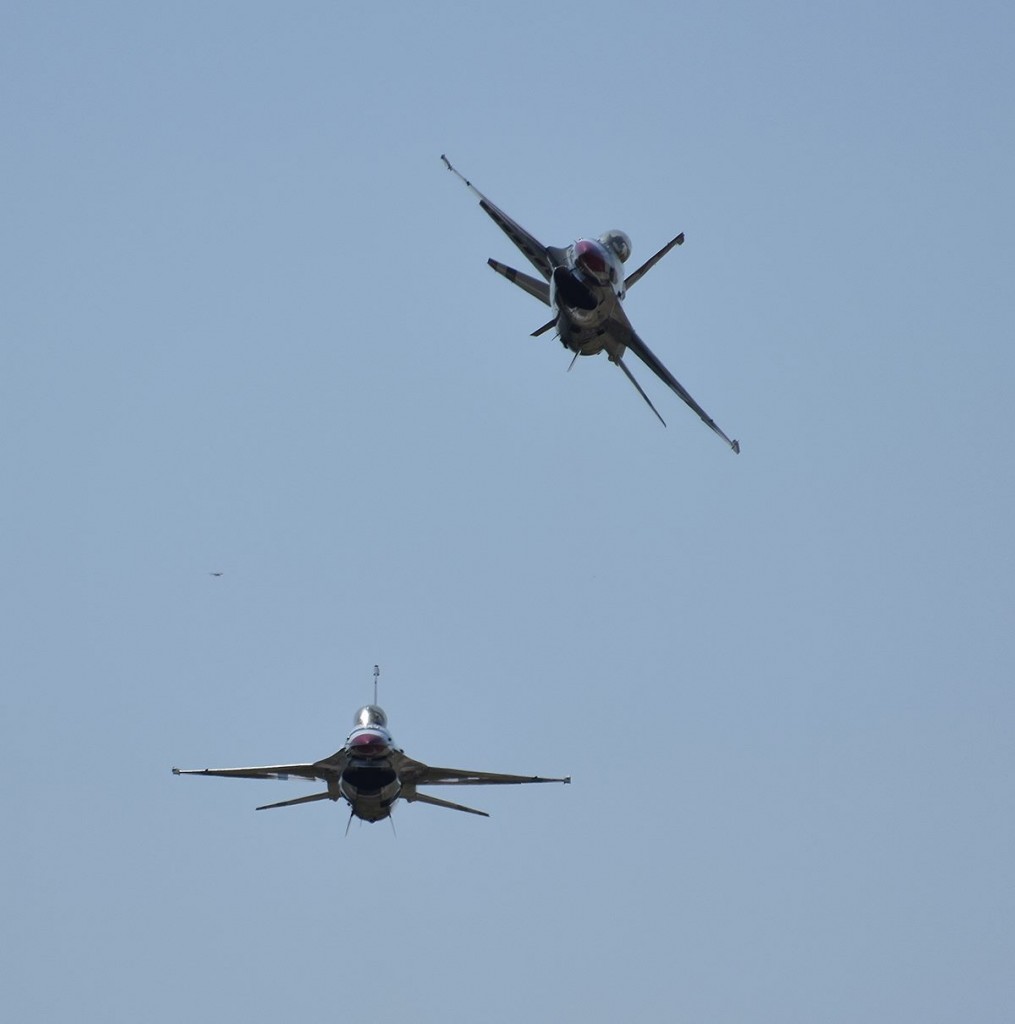 The solo pilots roll into their mirror formation, where they actually fly side-by-side. Photo: Nathan Thompson

Such a tour won’t involve Curtis, however, as he is currently coming to the end of his third and final season in the team. “[My] best memory after I leave the team is definitely going to be the people that I meet. We have an amazing job, and it is a job where we can showcase the United States Air Force to the American public. … The best part about that is … going out and meeting the crowd afterwards. The expressions on their faces is absolutely priceless.” 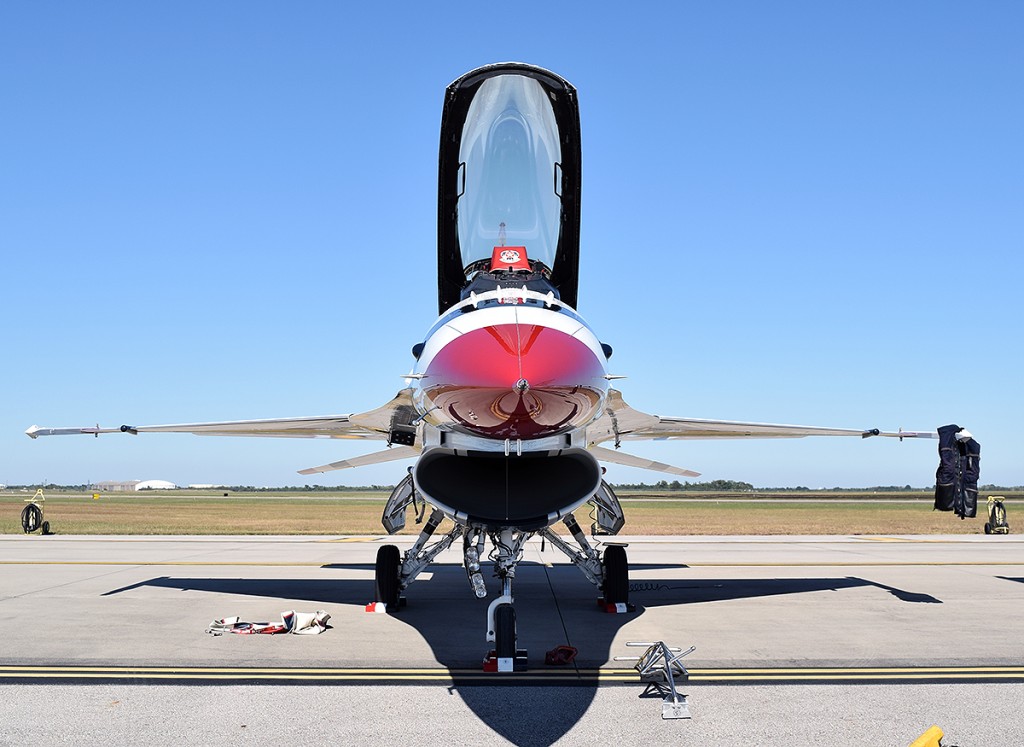 An immaculate F-16 from the Thunderbirds on the ground after a display rehearsal. Photo: Nathan Thompson.

We’d like to wish TB5 Jason Curtis all the best in his new role in the USAF, and long may the Thunderbirds continue!

Adam Landau is a Singapore-based student and aviation journalist from the UK. He is also the founder and editor of This is Flight. Photos come from US-based photographers Nathan Thompson and David Leadingham. The interview with TB5 Jason Curtis was undertaken by Nathan Thompson.