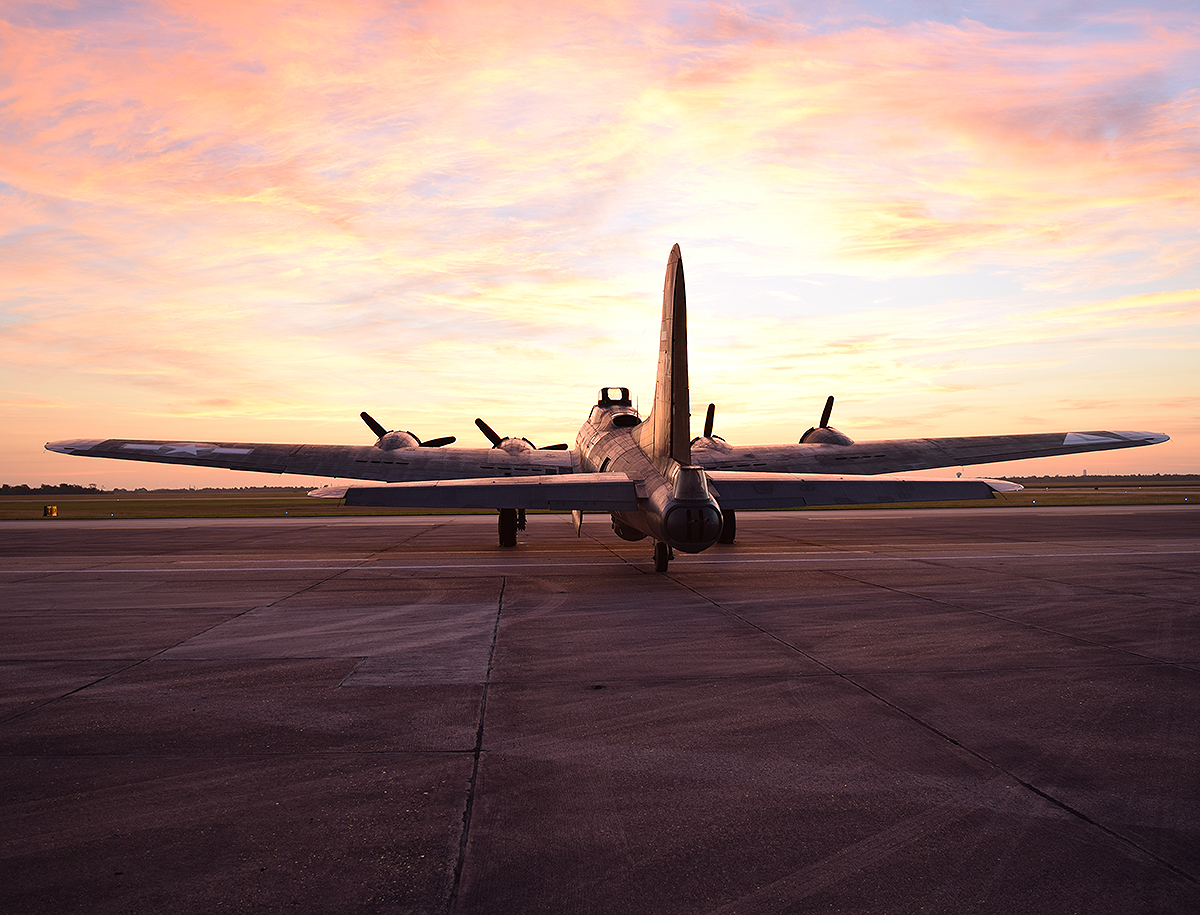 Calm before the storm: a B-17 at rest on the morning of the airshow. Photo: Nathan Thompson

My next day for Airshow coverage would be on Thursday October 15th, when the larger aircraft usually arrive for the static display. The demo teams also arrive on Thursday and fly their arrival procedures to check out the area and plan for their show. My morning started with me getting to the airport about 10am to get ready for the B-52‘s arrival from Barksdale AFB, Louisiana. After waiting about 50 minutes, the B-52 showed up was sighted, the lighting was perfect and I got some amazing shots of it landing. Then about 1:45pm I headed over to the airport for the arrival of the USAF Thunderbirds. 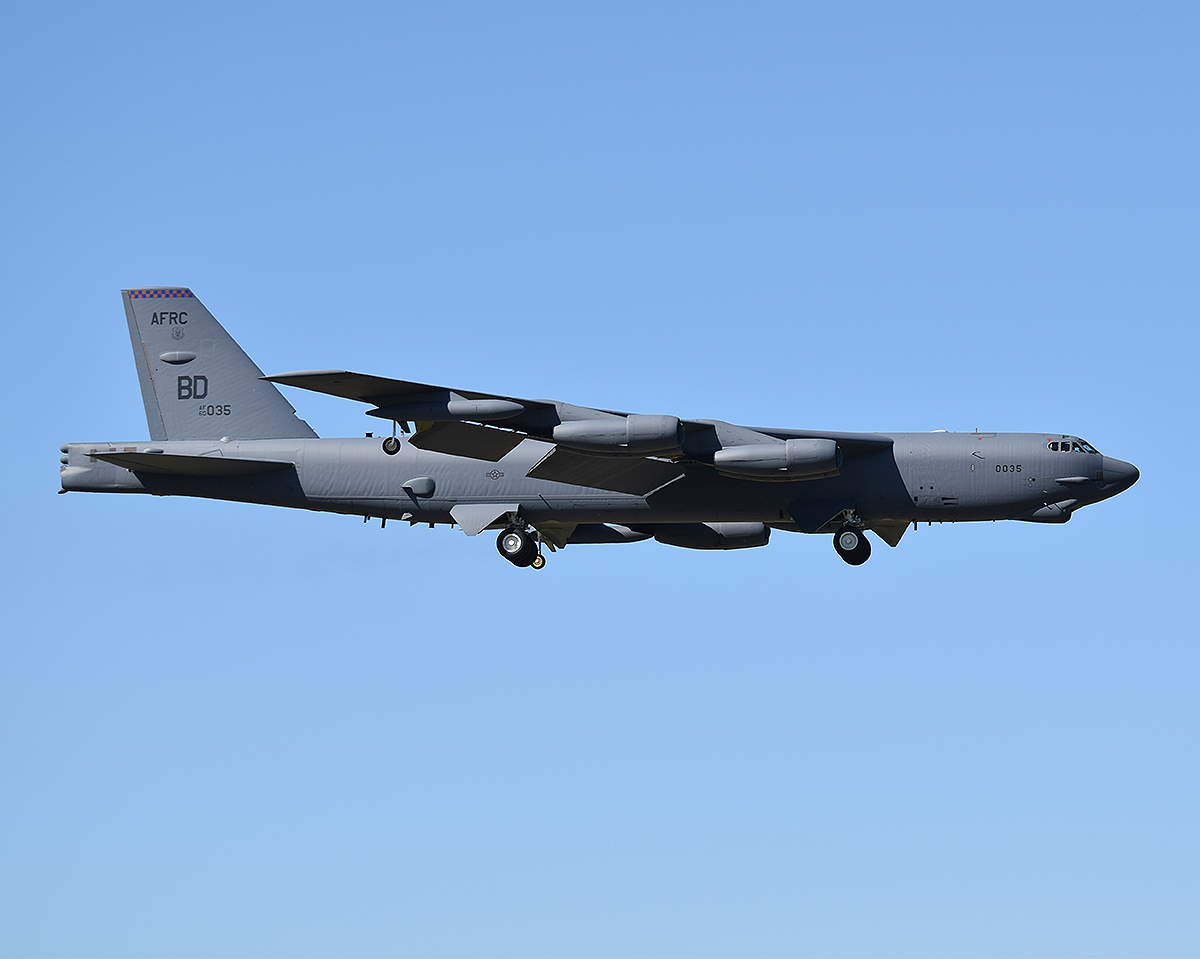 A B-52 bomber arrives in Houston on the Thursday. Photo: Nathan Thompson

The Thunderbirds arrived in two sections, with the Solos landing first while the number One, Three, and Four jets flew a few more passes then landed. Thunderbird Two was in Washington DC and did not arrive at Ellington until the following day. While the Thunderbirds taxied in we met the Thunderbirds PAO Capt. Sara Harper and their Photojournalist Senior Airman Tabatha Zarrella. Shortly afterwards we were escorted to the taxiway and were assigned pilots – I was assigned to Thunderbird #5, Lead Soloist Maj. Jason Curtis, and you can see the results of the interview here. Finally, it was time to head home. 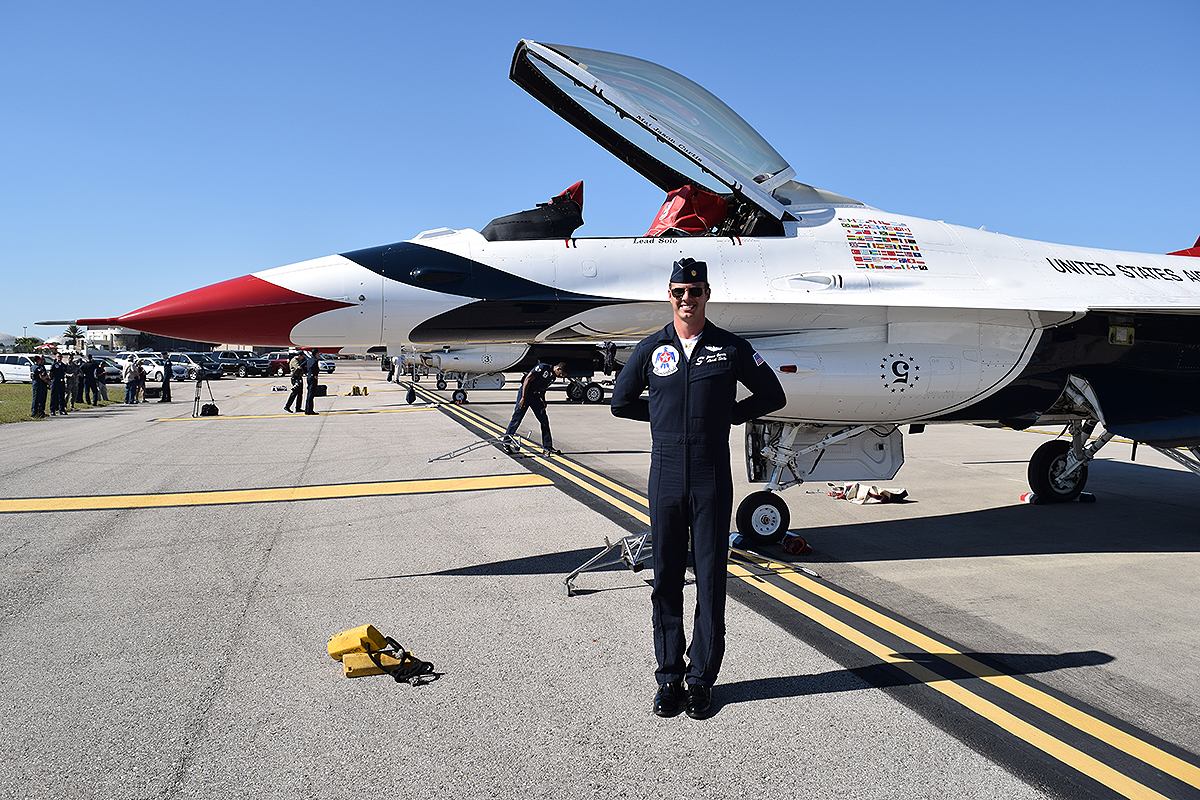 TB5 Jason Curtis in front of his F-16 on Thursday. Photo: Nathan Thompson

Friday October 16th was a busy day pre-airshow, starting with the Special Airshow for disabled children before the last remaining arrivals and rehearsals. The Kates and Val’ of the Tora Tora Tora group along with two T-6s were the first group to arrive before the airspace closed for the special show, which started with Kevin Colman, Debby Rihn-Harvey, and then David Martin, before Tora Tora Tora performed an abbreviated show with half their pyro. The Super Hornet was next to show off his moves and that ended the special show. 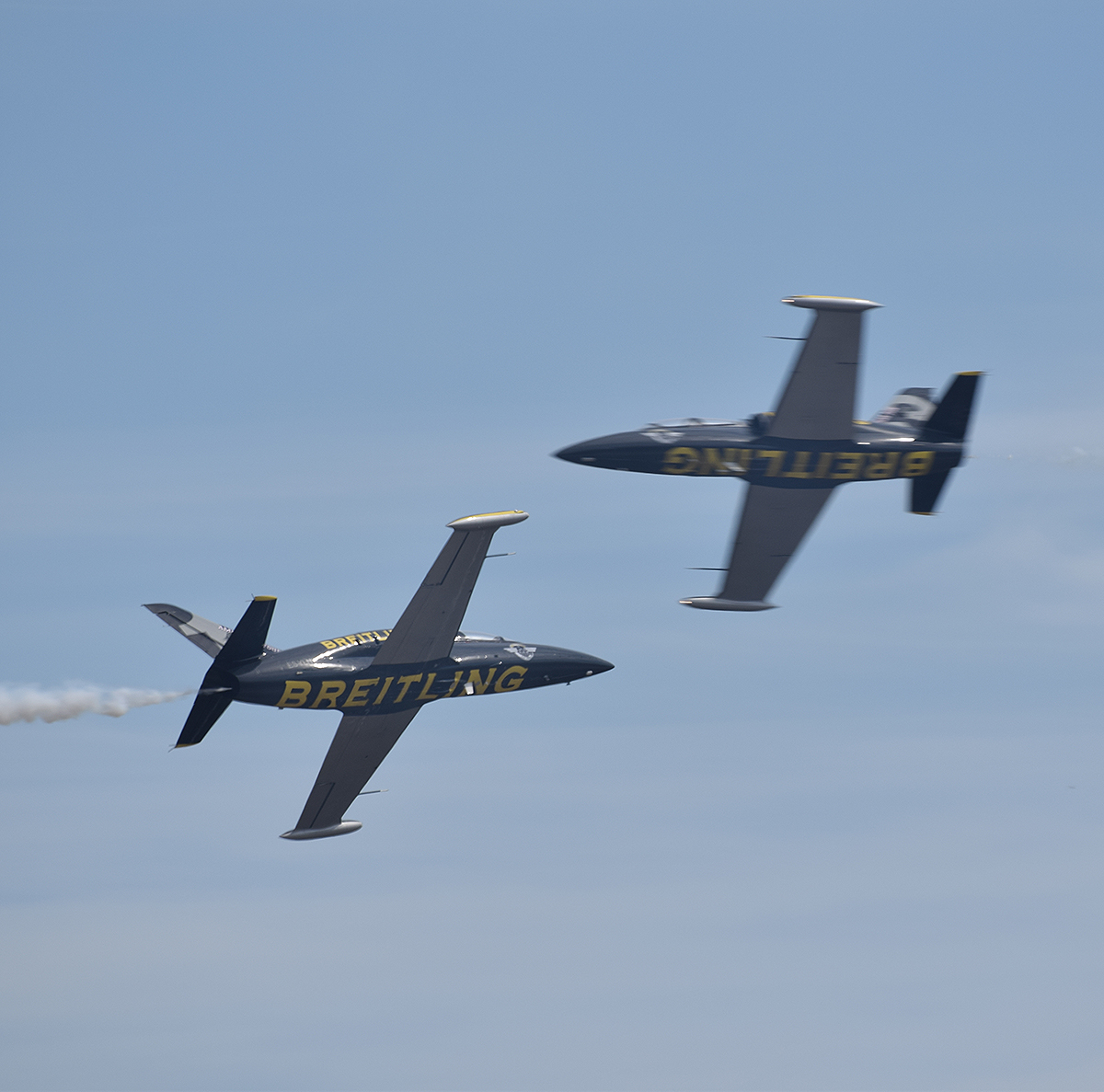 The winds switched so we had to go to the other end of the runway. We found a unique area to spot but eventually were told to move, so we found a spot facing Runway 35L to take photos of the arriving aircraft and the Breitling Jet Team‘s media flight. At 3:30, the Thunderbirds took to the air for their full rehearsal before the airspace reopened for arrivals. 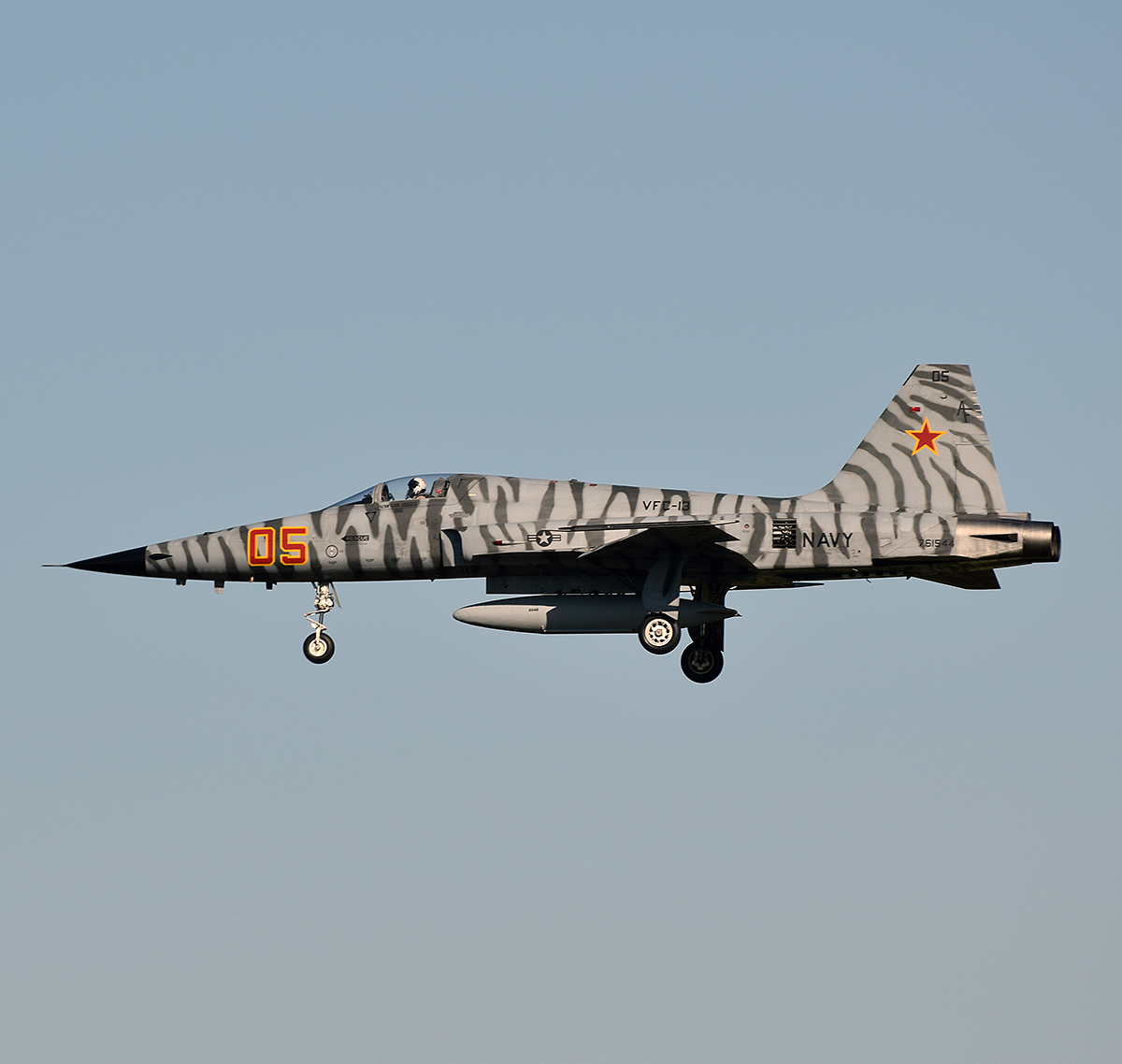 The first plane to land was the B-25 Yellow Rose from the CAF wing in the Texas Hill Country. A friend of mine heard that there could be a couple EA-18G Growlers coming in about 4pm, but they transpired to here on a “gas-and-go”, heading out to Key West. The next two planes following them were two F-5s from VFC-13 NAS Fallon Nevada and were coming in to be put on static; one was a nice Tiger Schemed F-5. After that the media flights and air-to-air sorties took off and the sun was getting low, so my final shot of the day was the Spitfire MkIX which the Texas Flying Legends received on the Wednesday before the show. 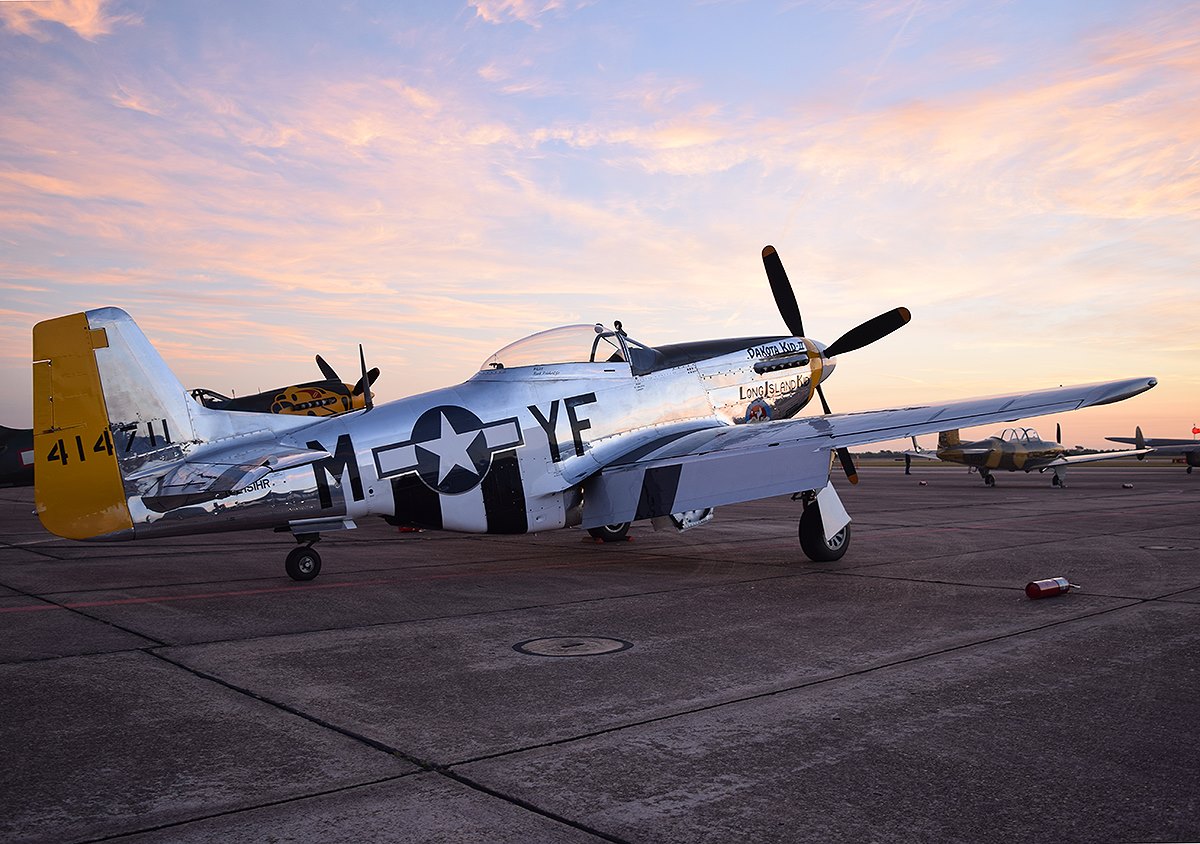 A P-51 sits dormant on the ramp at dawn on Saturday. Photo: Nathan Thompson

The first day of the show gave me an opportunity to get some sunrise shots thanks to the PR staff at Wings Over Houston. My alarm did not go off so I was running late and almost missed the sunrise shots, but thanks to another CAF Col I got escorted over to the Warbirds. I took photos and talked with other Photographers till 8am and headed over to the media check-in and collected my lanyard. I then proceeded to check the static aircraft that I partially caught the days before; even though it was not a big static display it had some uniqueness to it: besides the B-52 and F-5s, there was an F-16 from the Tulsa Air Guard, AH-64D Apache Longbow, Texas Flying Legends B-25 Betty’s Dream, MQ-1B Predator from the 147th Reconnaissance Wing from Ellington Field, Fieseler Storch in French Armée de l’Air colors, Max Holste Broussard, C-17 from Wright Patterson AFB Ohio, United Airlines 737-900 and 1957 Cessna 172 from the 1940 Air Terminal Museum which is their raffle plane. Some of the rarest types came from NASA, who had their B377 Super Guppy, Zero-G DC-9, WB-57 Canberra and T-38 Talon on display. 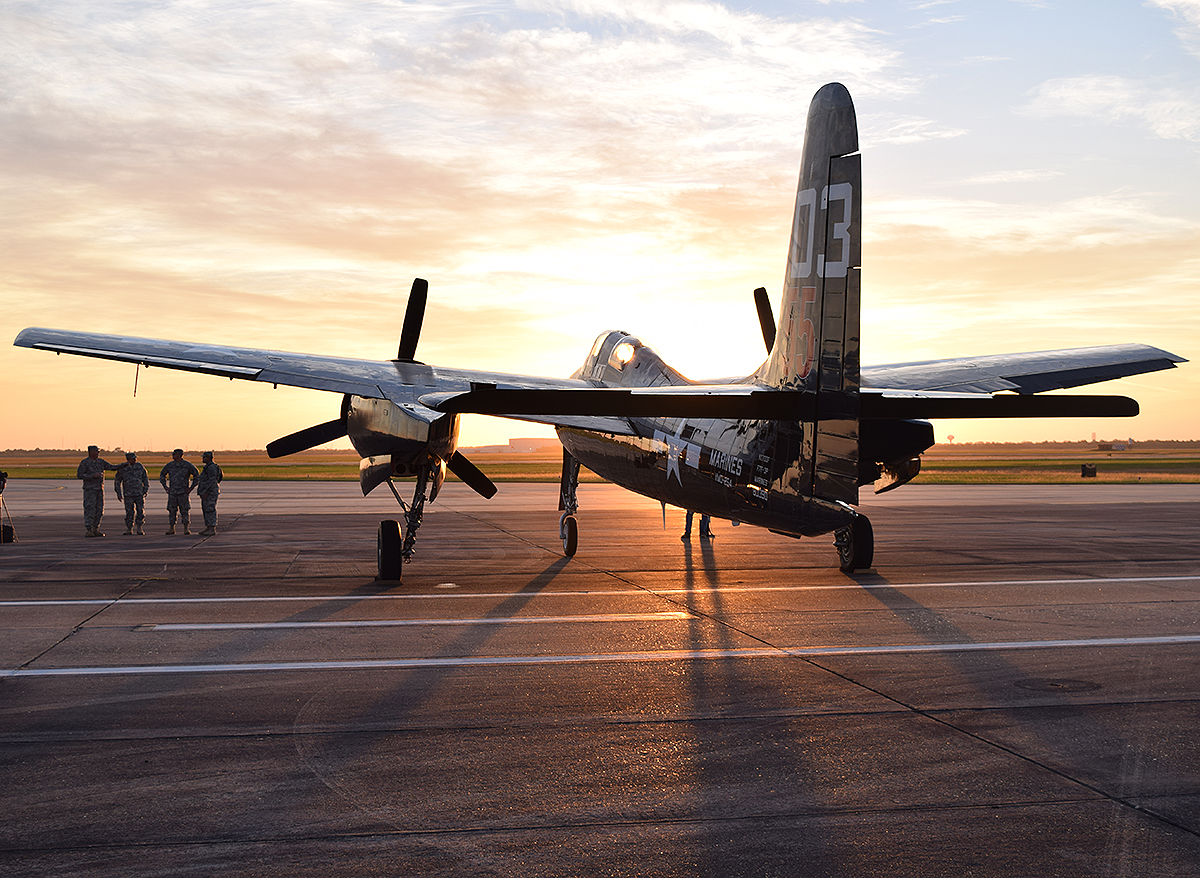 The dawn photoshoot was a chance to capture some amazing, unusual images. Photo: Nathan Thompson

After walking around the local R/C flying clubs had their pilots flying remote-controlled models, including an Extra 300, J-3 Cub, A-10, and BAe Hawk with a real jet engine. The Cessna 188 jump plane of the Remax Skydivers took off as well as Kevin Coleman’s Extra Aerobatic Plane. It was time for the National Anthem; the jumpers jumped and Coleman circled the Flag as it made its descent. Then, Coleman performed a short three minute teaser aerobatic routine and landed. 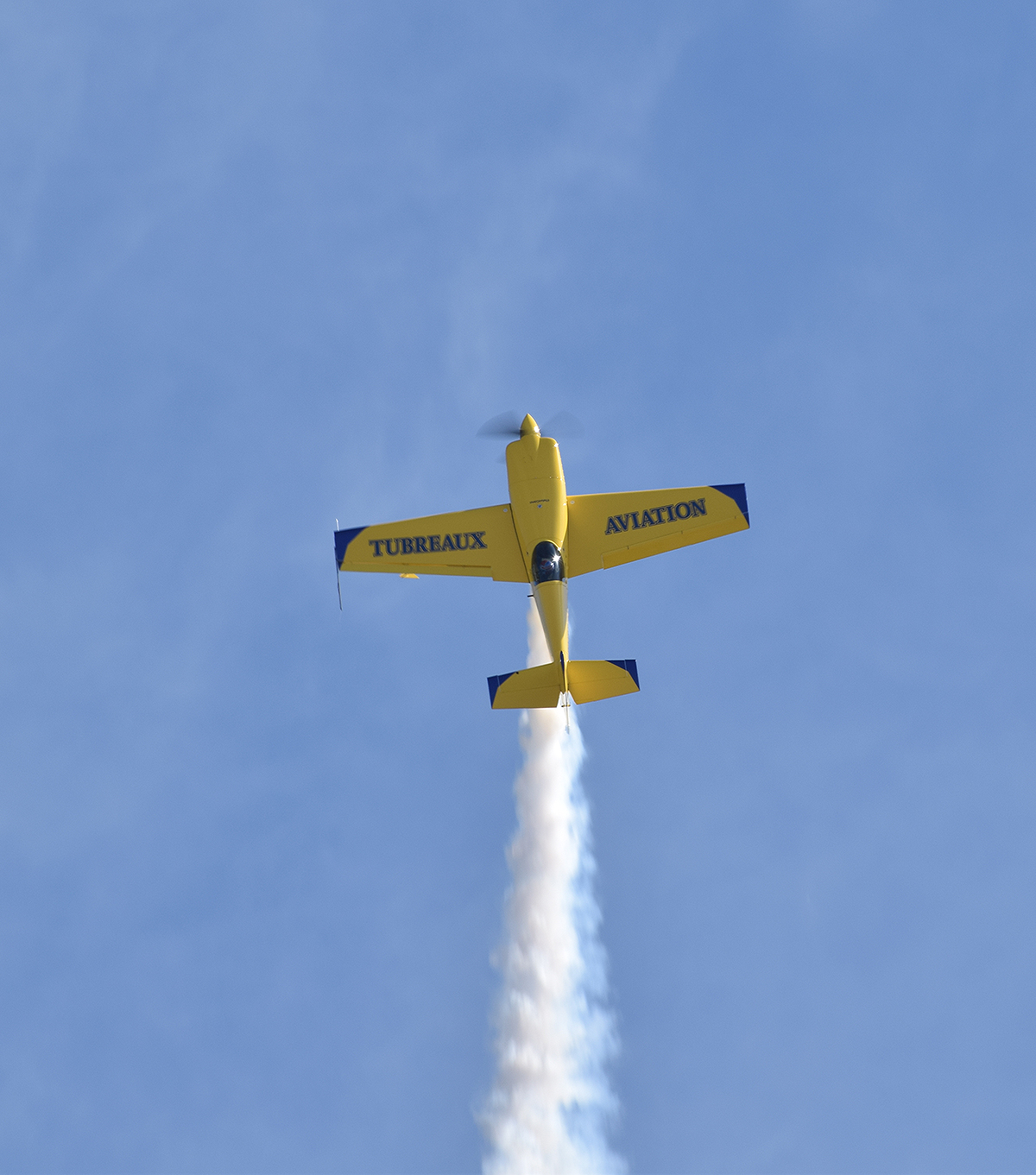 Then it was time for the local aerobatic pilot and 2006 US National Aerobatic Champion from La Porte, TX: Debby Rihn-Harvey, to do her routine. As well as aerobatics, she is also a Southwest Airlines Pilot. As she displayed, Tora Tora Tora took off and formed up away from the airport in preparation to take the crowd back to the war years. As commentator Ken Crites said “imagine yourself in 1941 on a quiet Sun morning December 7th”, Tora Tora Tora roared overhead and the explosions started! Soon, the smoke was enough to obscure the crowd. The B-17 then came in making several passes as the P-40 was chasing a Japanese Zero. Then it was over, with one final pass and bomb burst from Tora Tora Tora and the P-40. 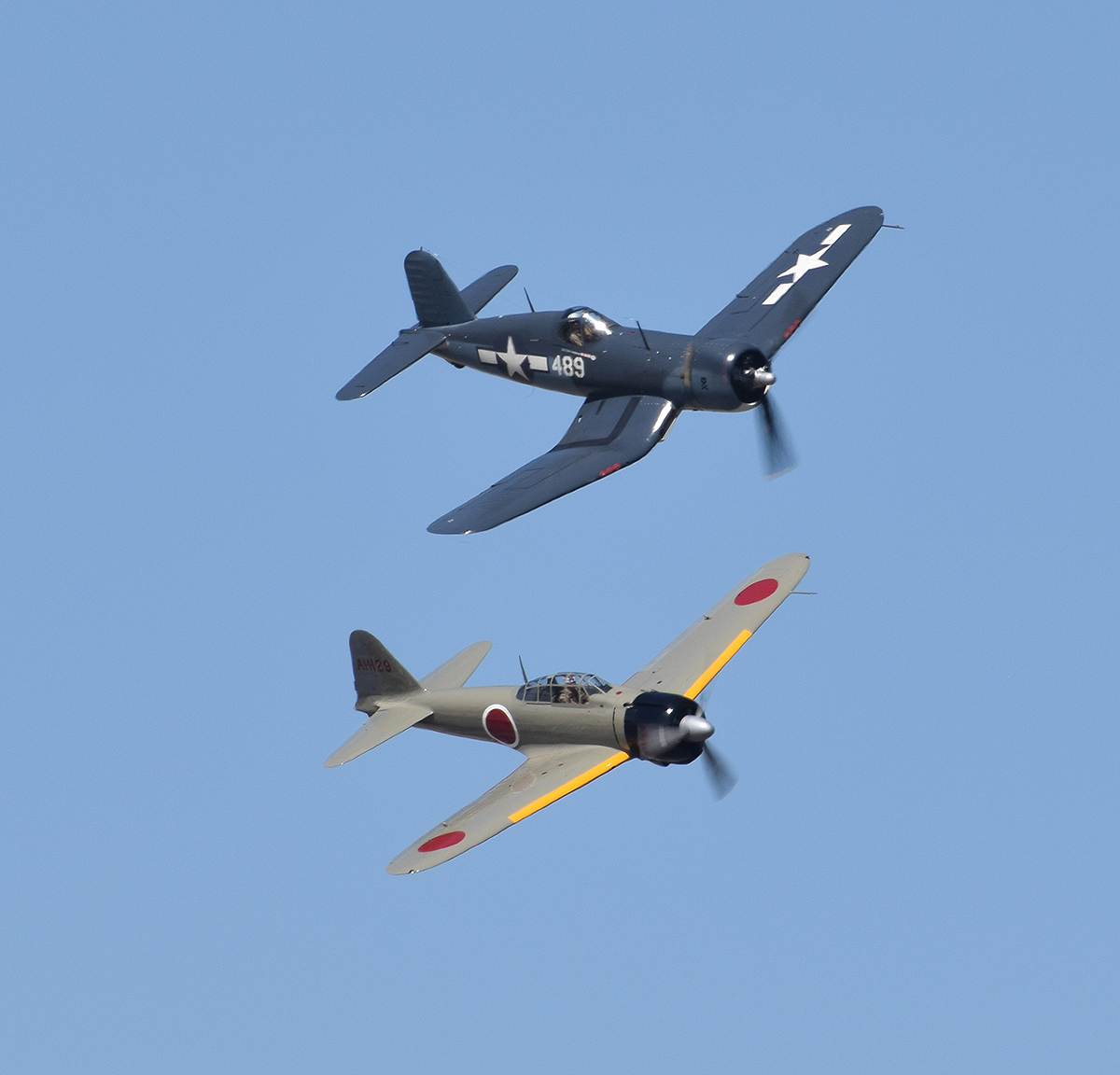 Next came the Trainers on Parade, featuring examples of the T-6/SNJ/Harvard, BT-13s, T-28, O-2A, PT-17, and N3N aircraft before the war in Europe took off, featuring two P-40s, a P-51, the MkIX Spitfire, B-25 Yellow Rose, B-17 Texas Raiders, C-45 Dakota, and the Collings Foundation Me-262, attacking the B-17. Again, this was accompanied by pyrotechnics. As the display’s finale, the Spitfire, P-51 and the Me-262 performed a series of rare formation passes. 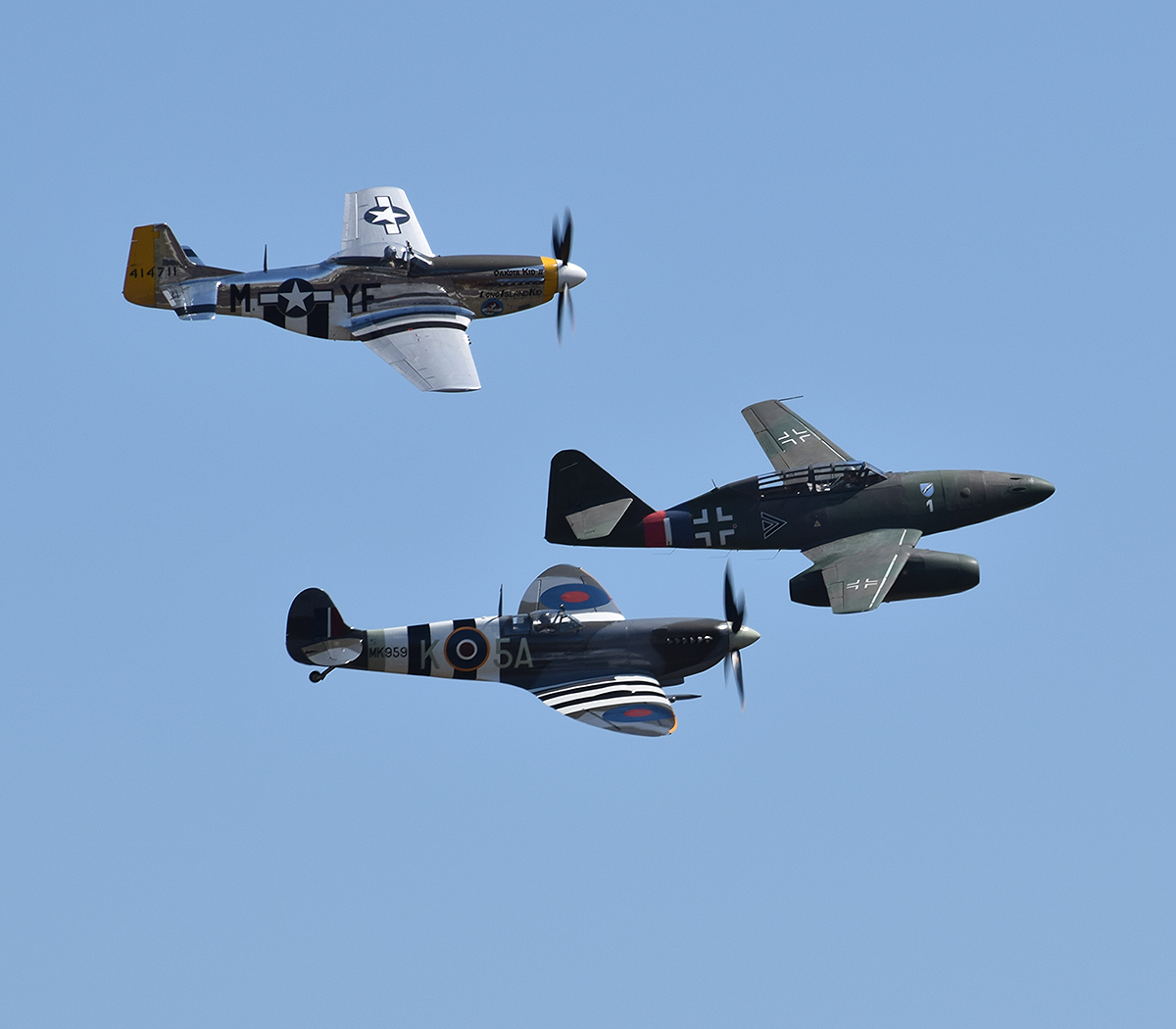 A rare trio of three of the most iconic WWII aircraft: Me-262, Mustang and Spitfire. Photo: Nathan Thompson

The War in the Pacific came next, and first up was Stewart Dawson in the F-7F Tigercat doing an awesome aerobatic routine. Then the rest of the Navy planes took off including two F-8F Bearcats, Texas Flying Legends’ F-4U Corsair, Lonestar’s SBD-5 Dauntless, the SB2C and the TBF Avenger. All the fighters and the bombers did more passes with yet pyrotechnics. Most of the planes landed except the Corsair, and the Texas Flying Legends A6M2 joined the Corsair for a simulated dogfight with the Corsair emerging victorious. 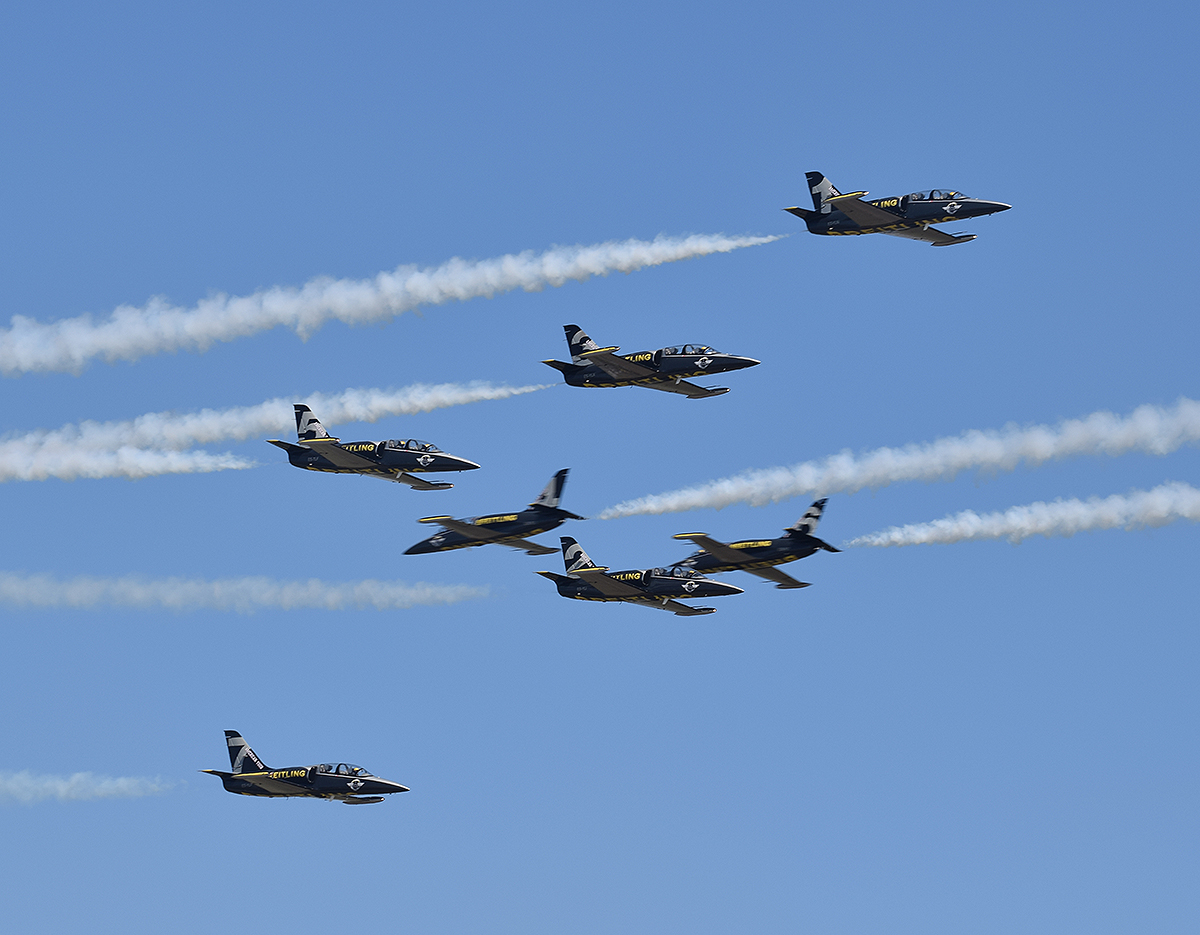 Next up, the Breitling Jet Team with their graceful routine in the wonderful black, grey and gold L-39s. A deck of high clouds moved in during the show, so when they did their last bomb burst, the flares really stood out! The F/A-18 Super Hornet from VFA-122 was next with its explosive routine. It was originally intended to be an F/A-18E but VFA-122 sent two F/A-18Fs instead. 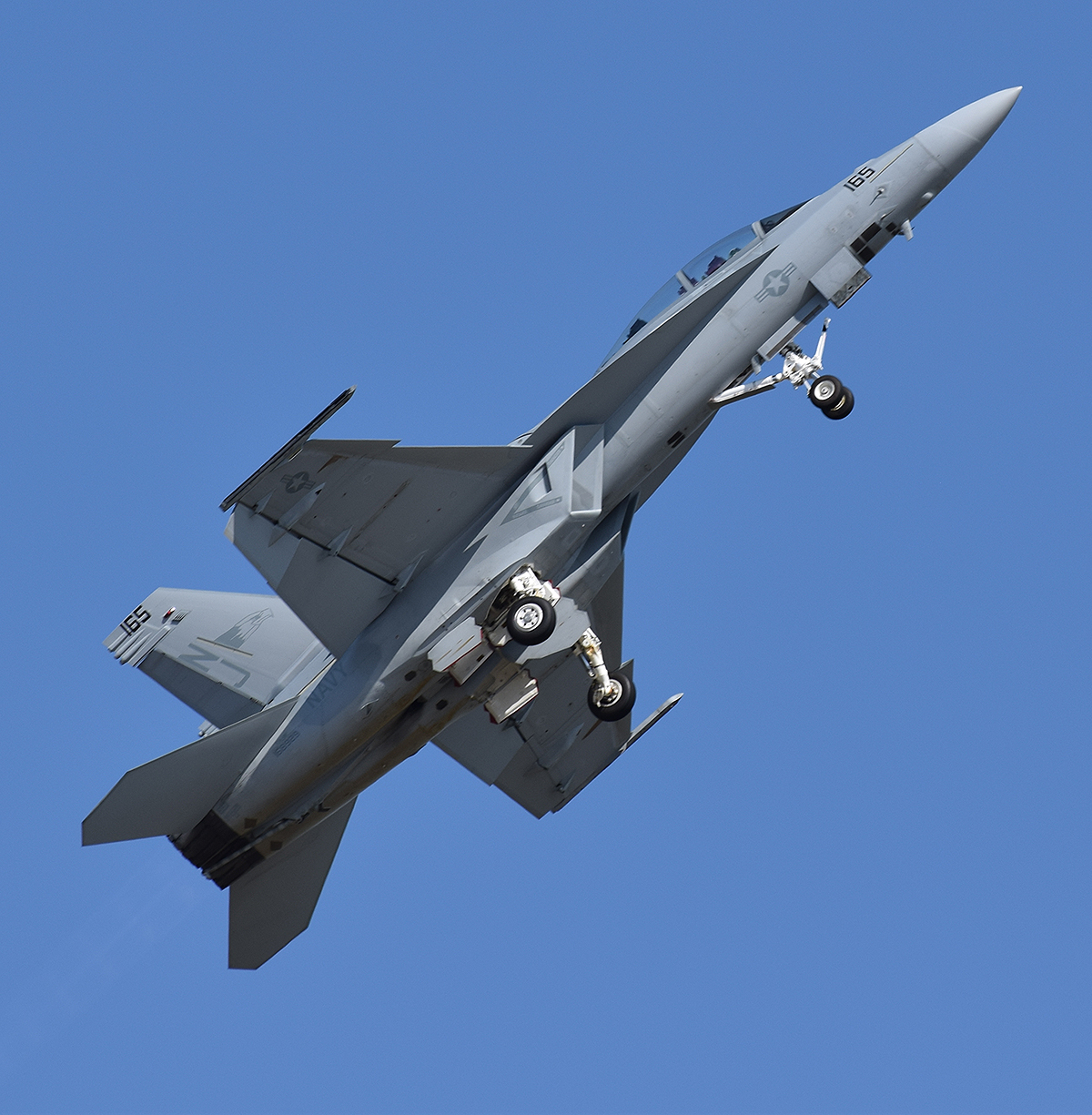 The US Navy is renowned for staging one of the top Hornet demonstrations. Photo: Nathan Thompson

After a jump from the Remax Jump Team, Kevin Coleman performed his energetic full routine. Then came Saturday’s conclusion, the USAF Thunderbirds. They did their traditional startup parade and warmed up their engines before taxying out, but once on the runway, Thunderbird #4 encountered a problem and taxied back and shut down. He then jumped into the two-seat spare jet, but it would not start, so he tried the next spare. Finally, he started up and joined the rest of the Diamond formation on the runway. The Diamond took off followed by the Solos; they got to do the high show and looked flawless. I watched up until the Delta passes since I knew I would be back on Sunday and tried to beat the crowd, but still got stuck in an hour-and-a-half-long traffic jams. 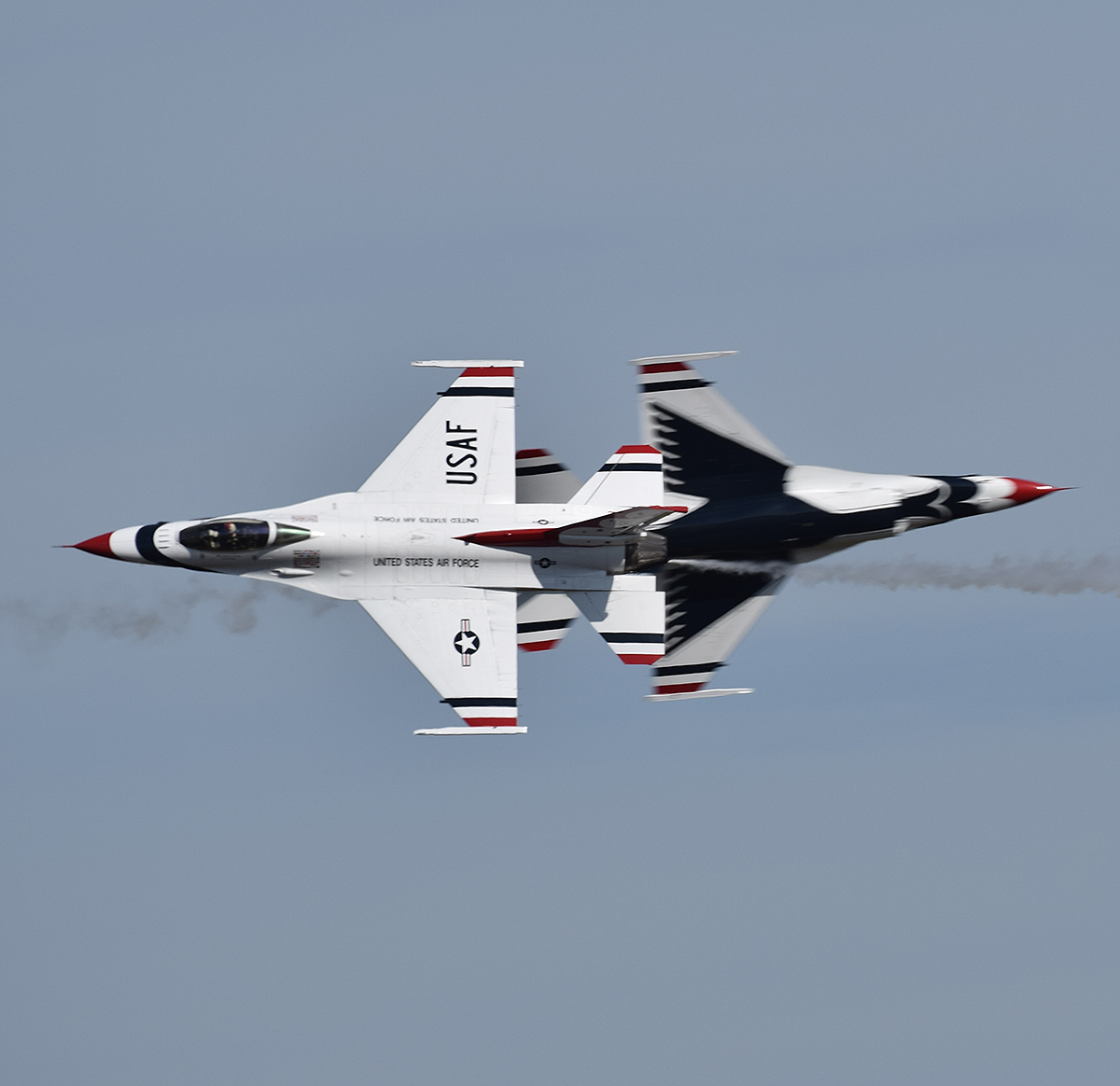 The solo pilots of the Thunderbirds perform one of their trademark opposition passes. Photo: Nathan Thompson

Sunday is always special for me at Wings Over Houston as it’s the day I go with my dad. We got up early to got into the parking area about 7am and waited in line to get into the airshow with all the other early arrivals at the gate. The gates opened and we rushed to our location left of show center in front of the Thunderbirds. The Sunday was a lot nicer the Saturday, with no clouds in the sky. My dad and I walked down to the warbirds and visited with the C-17 crew on the way. Sunday’s schedule was almost exactly like Saturday’s, with only a few minor adjustments. During the USAAC airpower the C-60 Lodestar took off with some jumpers, but although it was deemed to be too windy for the jumpers to jump, one jumper appeared to not get the message. He was blown into the crowd, landed onto a vendor tent and broke his leg. 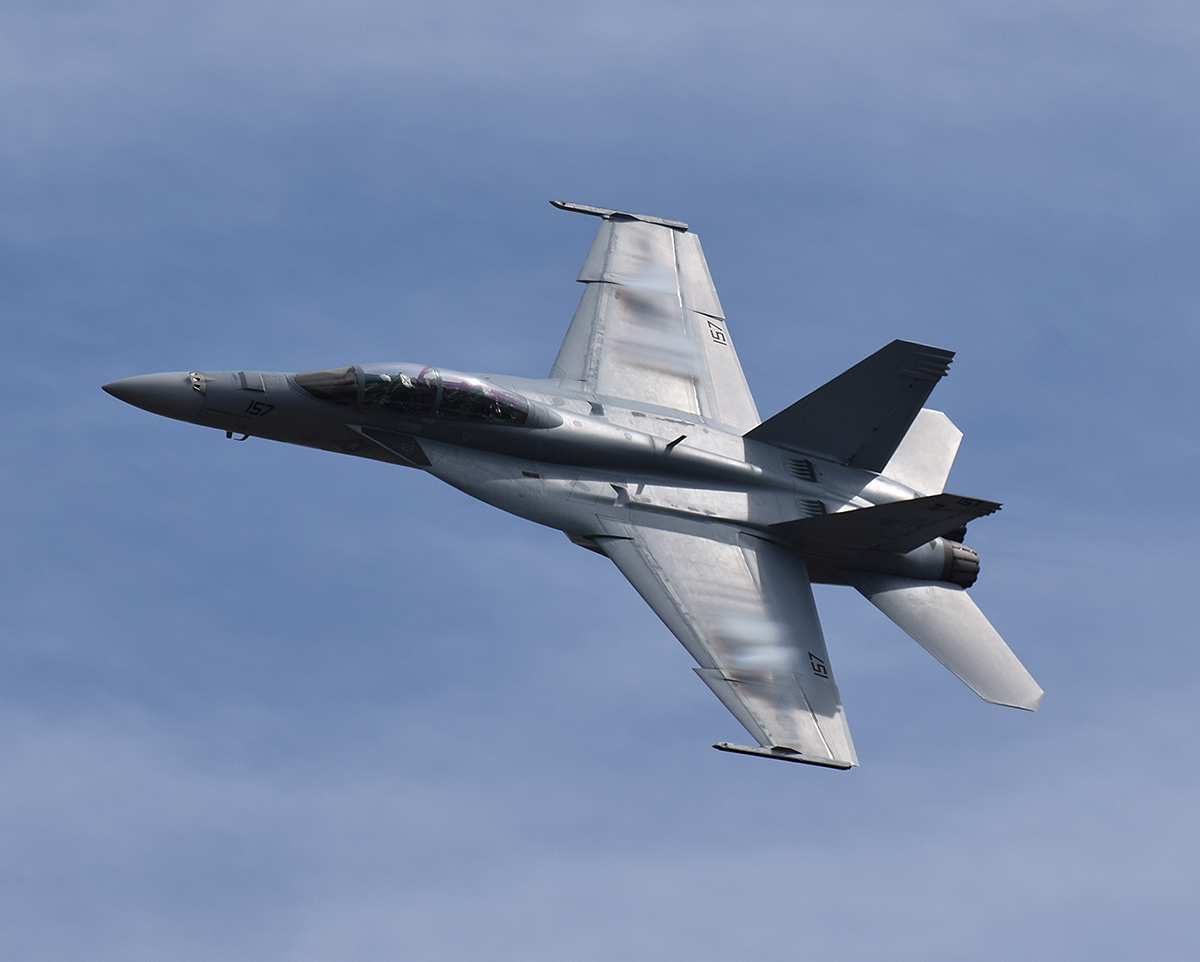 The Super Hornet pulled some vapor during the high-speed pass. Photo: Nathan Thompson

The rest of the show went off without a hitch and the smoke was less of a problem due to the different wind conditions. My dad and I enjoyed the show, especially the Thunderbirds, which he saw as a kid in F-100 Super Sabers. The Thunderbirds had no issues on Sunday and took off on time; I stayed for the whole routine this time. 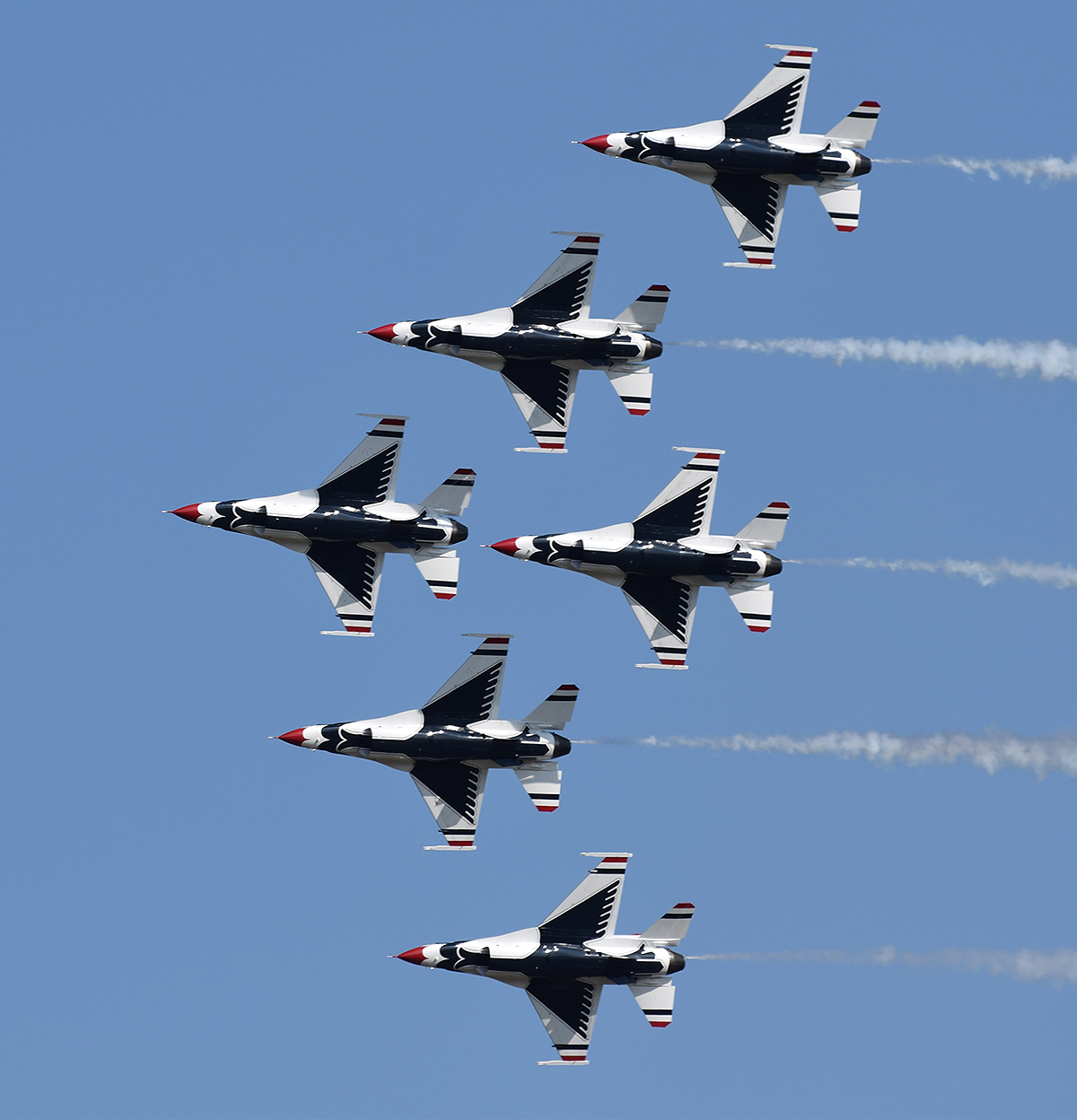 We stayed and walked around after the show and got to talk to the VFC-13 pilots, whom were heading to Key West after the show. It was a great weekend for Wings Over Houston and a great week leading up to it as well. I cannot wait for next year’s show, featuring the US Navy Blue Angels, when I will once again report for This is Flight.