Every year, thousands of aviation enthusiasts descend upon Old Warden Aerodrome in Bedfordshire up to 11 times a year for various different events celebrating all things aviation. The Shuttleworth Collection’s Pageant Airshow is the only event however, that focuses almost solely on the aircraft that make up the Shuttleworth Collection with only a few visiting displays. The vehicles and aircraft in the Collection are examples that were collected by Richard Shuttleworth himself, or have been added to the collection to be preserved in his memory following his untimely death on the 1st of August 1940 when he crashed during a cross-country training exercise in a Fairey Battle aircraft. 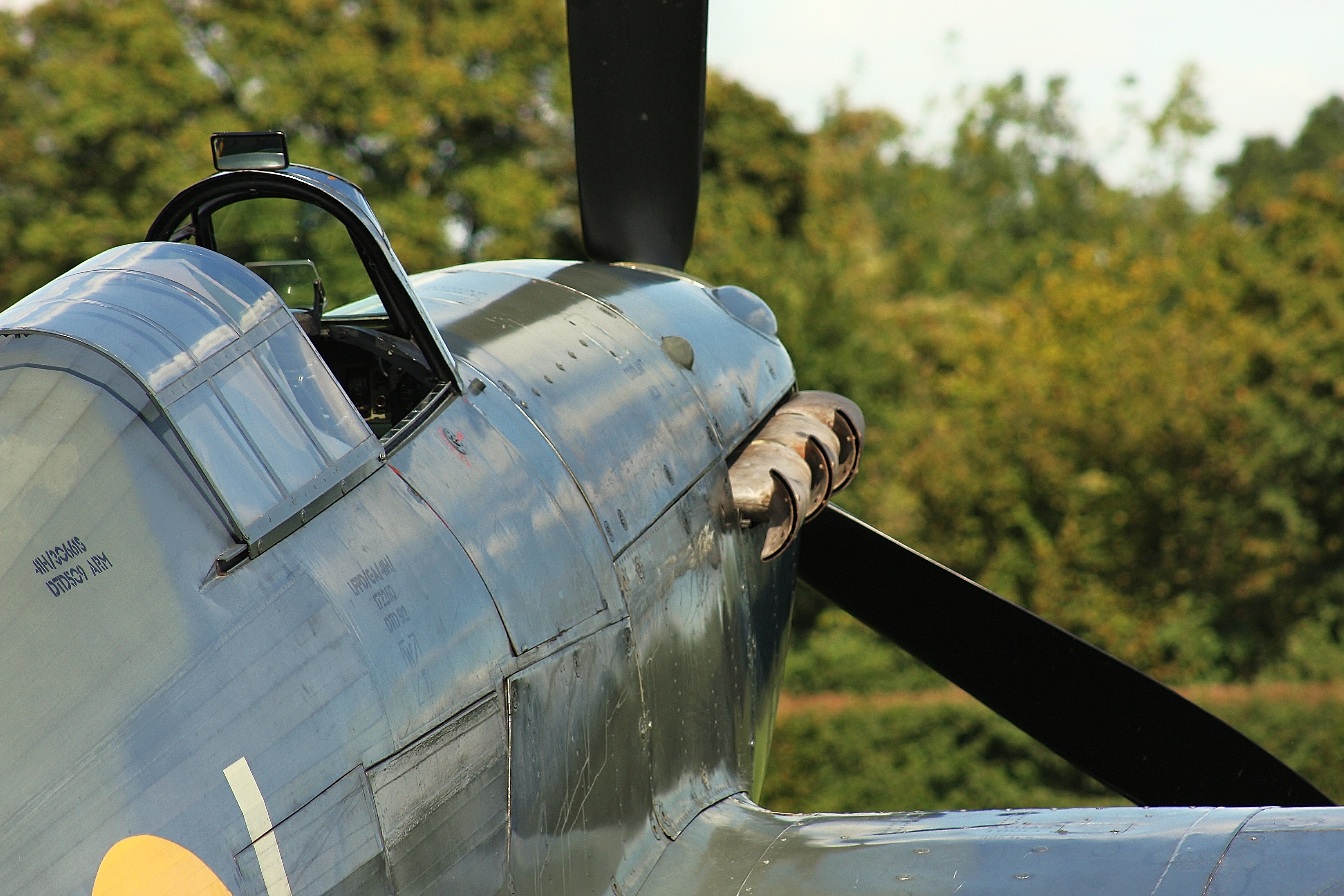 Incredibly, the 45 aircraft of the collection are maintained by a core team of only 8 engineers supported by little more than 30 volunteers, and the team works to ensure that as many aircraft as possible are airworthy for the Pageant Airshow.

This was my first visit to Old Warden, and I had heard only good things about the fantastically maintained aircraft and the relaxed nature of the venue. Due to the diminutive size of the airfield, the display line is very close to the small crowd line and the dogleg shape of the display line encourages the pilots to provide fantastic sweeping top-side passes.

The white-clad ground crew are a fixture of Shuttleworth events. Photo: Alex Prins

Traffic getting in and out was minimal; the slowest I was moving on my way in was when I got stuck behind a horse-box! The atmosphere was very relaxed in comparison to other, bigger shows, and it made a pleasant change to be able to arrive with an hour to spare, wander around the hangars and stalls and down the flightline, and still find a spot at the front of the crowd. 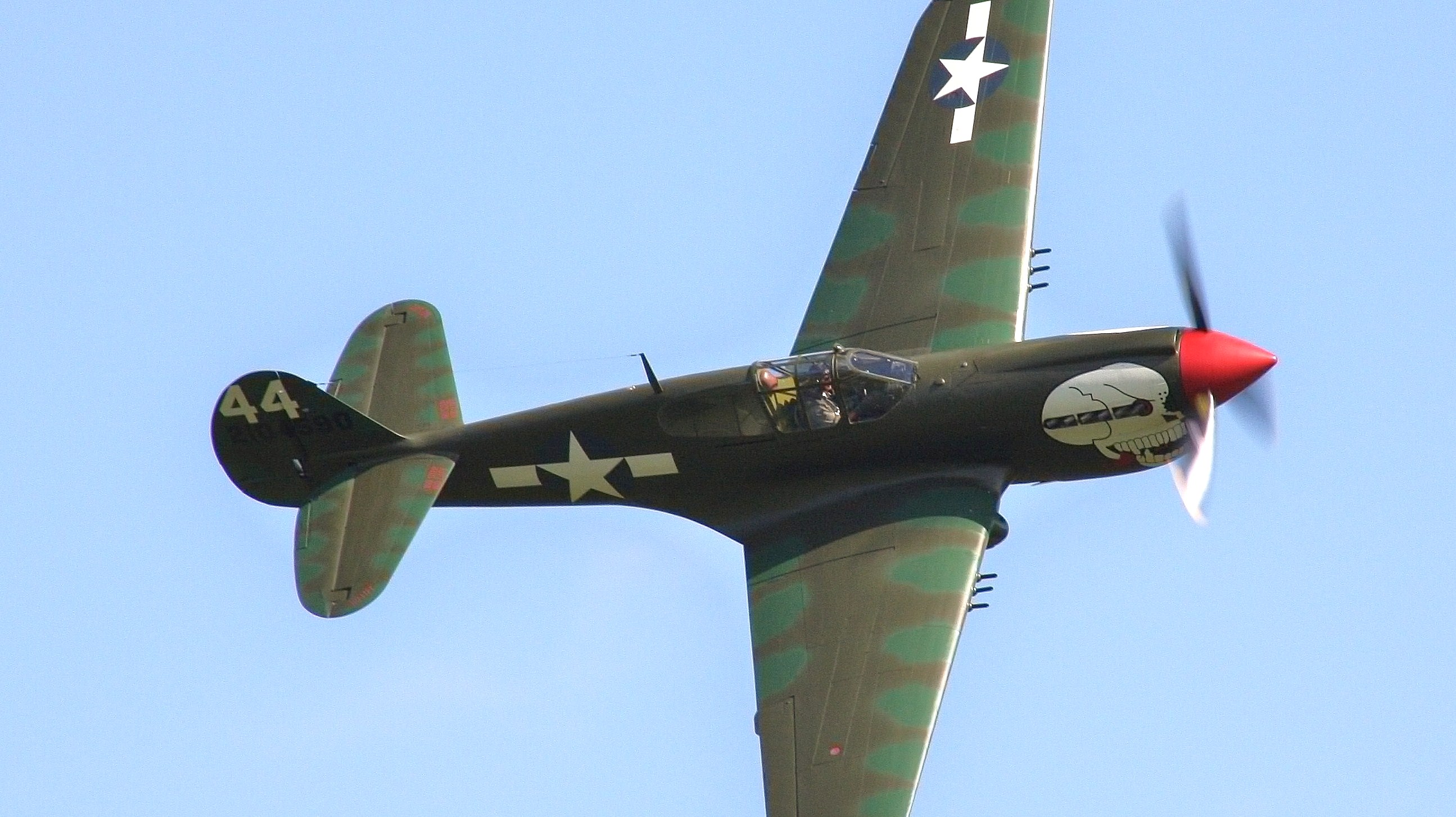 The P-40 Warhawk was one of the most successful and advanced WWII fighters. Photo: Alex Prins

The ‘Hangar 11 Collection’s Curtiss P-40M Kittyhawk opened the display, with Peter Teichman piloting the only airworthy example of this variant in Europe. The P-40 shares its stable with three other fine examples of WWII aviation, and the ‘Hangar 11’ team perform on average a staggering 80+ public displays every season.

After taking part in the filming of the movie ‘Red Tails’ in 2009, the Kittyhawk flew for 3 seasons in a temporary scheme until the decision was made to repaint it to represent the P-40 flown by 2nd Lieutenant Philip Adair who scored two kills and won the Silver Star; all while flying “Lulu Belle”. After a single season in her new scheme, the ‘Hangar 11’ team began an engine change that has meant that “Lulu Belle” only flew for the first time in 18 months in late June of this year.

It was fantastic to see the menacing white skulls that haunted many Japanese airmen glaring down upon the crowd that was held captivated by Peter Teichman’s masterful display, which consisted of a series of sweeping passes often culminating in graceful loops. 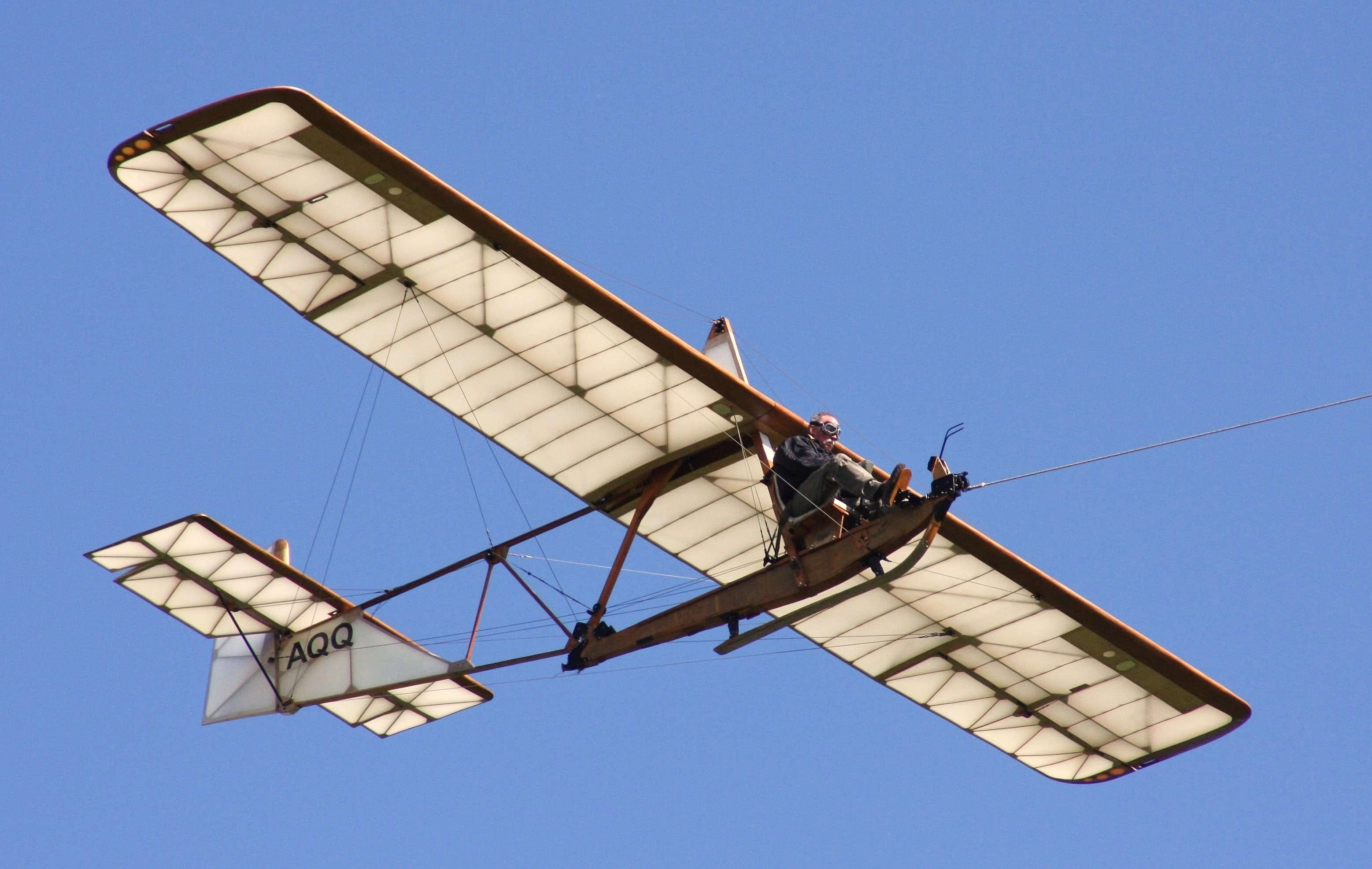 The wood and fabric Eon Primary was towed by the Super Cub, another vintage aircraft. Photo: Alex Prins

This set the stage for the first of two glider displays, the Eon Primary, which is an incredibly minimalist aircraft. Designed as a training glider and developed after the end of WWII, the Primary was used for a while by the Air Training Corps. After several, slow, graceful passes while being towed by the Collection’s Super Cub, the Primary slipped its tow and began a quick spiral descent.

The Avro Anson was an early airliner, which made its first flight in 1936. Photo: Alex Prins

This was followed by a spirited display by the resident, BAE owned, Avro Anson which is one of only a few of the remaining 11,000 built that is in airworthy condition. Next was the Avro 504 followed by a formation flypast by the biplane trainers of the collection: the Polikarpov Po-2, Hawker Tomtit, DH82a Tiger Moth and the Blackburn B2. The sections of the flypast then split up for a series of arcing topsides and graceful turns.

A four-ship of rare biplanes is a sight that can’t be seen in many other places outside Old Warden. Photo: Alex Prins

A regular guest at Old Warden is the ‘Battle of Britain Memorial Flight’, and it made a nice change to see the BBMF Dakota making a visit. Often overshadowed by its more glamorous Merlin and Griffon powered sisters, ‘Kwicherbichen‘ has this year taken over the Lancaster’s slots due to its unfortunate engine failure in early May. The BBMF is somewhat notorious for displays lacking in topsides and this proved to be the case, with rigid straight and level fly pasts, however the Dakota is always a pleasure to see.

The BBMF’s Dakota replaced its Lancaster, which is still grounded. Photo: Alex Prins

Next was an unusual ultralight: the ANEC II, quickly followed by a Hawker Cygnet pair. This pair was followed by another: two Mew Gulls, one of which was an original and the other a faithful replica. After two formation passes, the two 1930s racers split up for a series of solo passes, with the visiting Gull putting on a fantastic display which consisted of close, fast topsides.

The ANEC II was one of the first purpose-designed ultralights. Photo: Alex Prins

The next display was the only modern day aircraft on display, an Extra 330SC flown in the capable hands of aerobatic champion Mark Jeffries. His stomach churning display showcased his aircraft’s astounding roll rate of 420-degrees-per-second and at times he seemingly defied the laws of physics, which was a stark contrast to the slow and graceful displays flown by aircraft nearly 100 years the Extra’s senior. The applause that he received upon exiting his Extra says it all – a fantastic display! 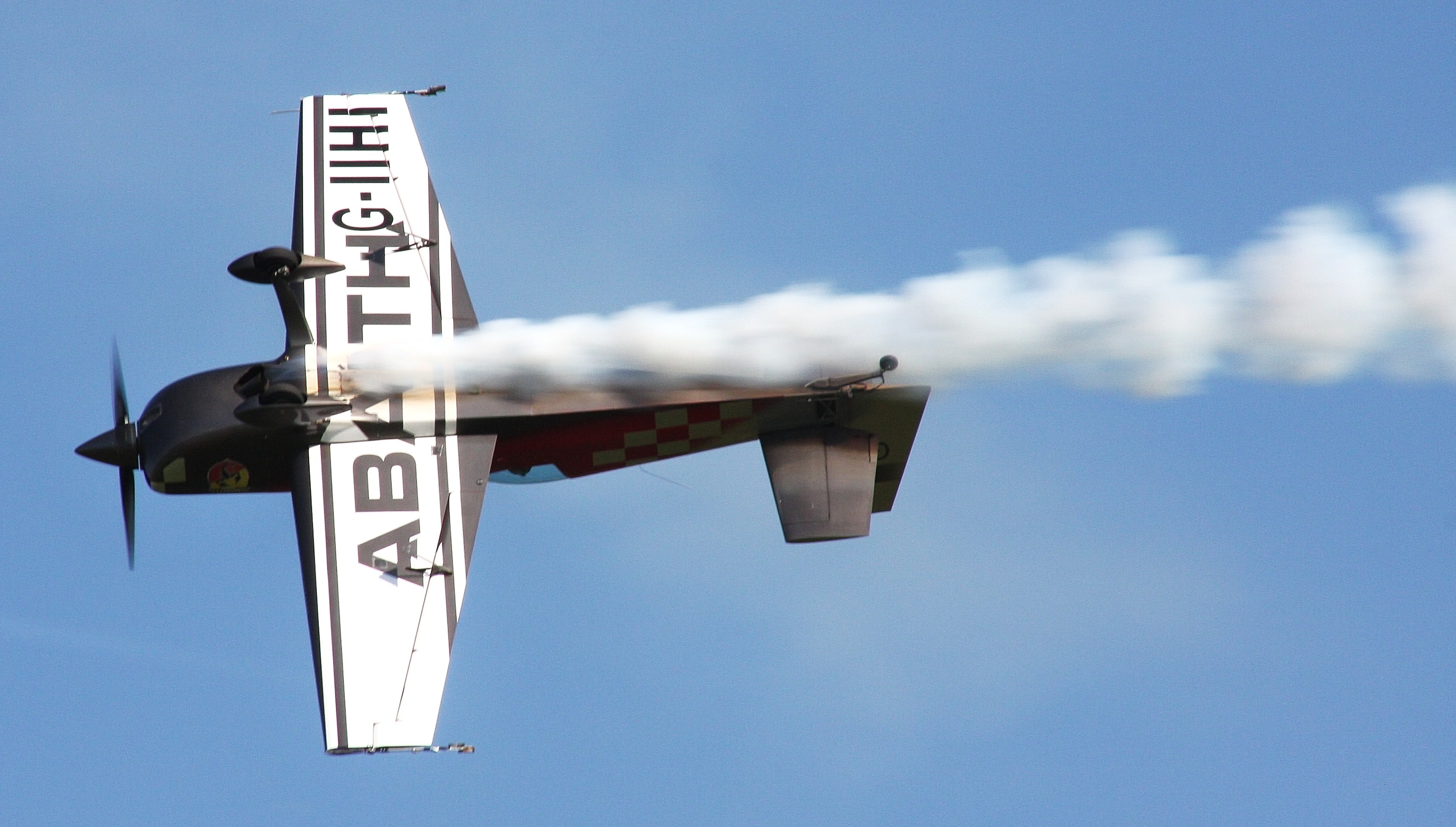 Mark Jeffries is one of the UK’s most famous aerobatic pilots. Photo: Alex Prins

Then it was from the modern back to the origins of the Collection: a flypast by three aerial carriages – one of which was the very aircraft that Richard Shuttleworth first flew in and formed the nucleus for his expanding collection. This aircraft, a de Havilland Cirrus Moth, led a vic-formation which consisted of another Moth, this one a DH.60X, and a Southern Martlet. 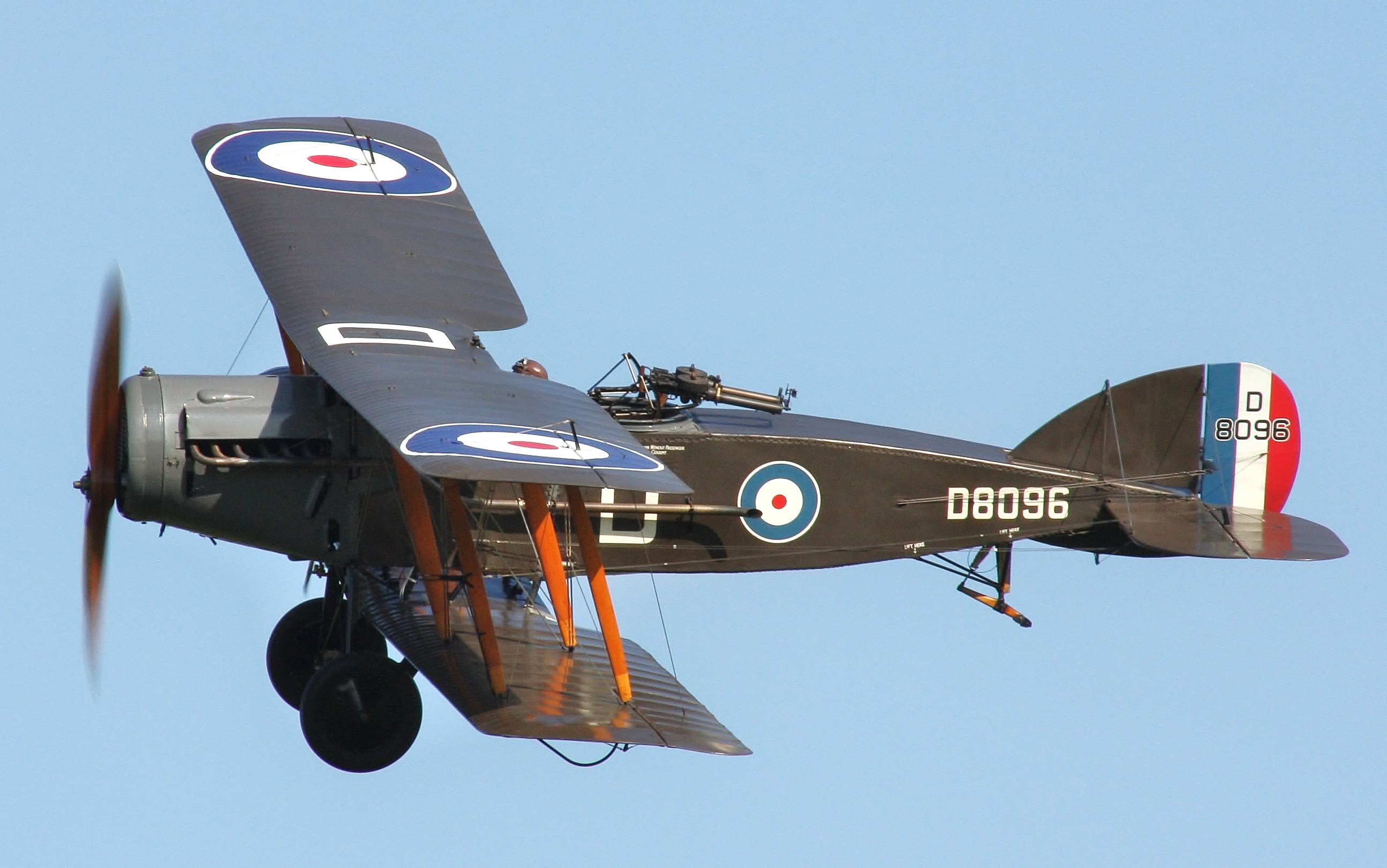 The Bristol FB.2 is one of the most famous allied aircraft of WWI. Photo: Alex Prins

Two aircraft from an earlier era were the next to take to the skies, a Bristol F2.B and a Bristol M.1C, both veterans of the First World War. The M.1C was flown by the Collection’s chief pilot, “Dodge” Bailey, and I felt that the first part of his display quite high and with such a quiet engine it had very little impact for me. This was redeemed by his final series of fast and low passes which epitomise the Collection and its displays. 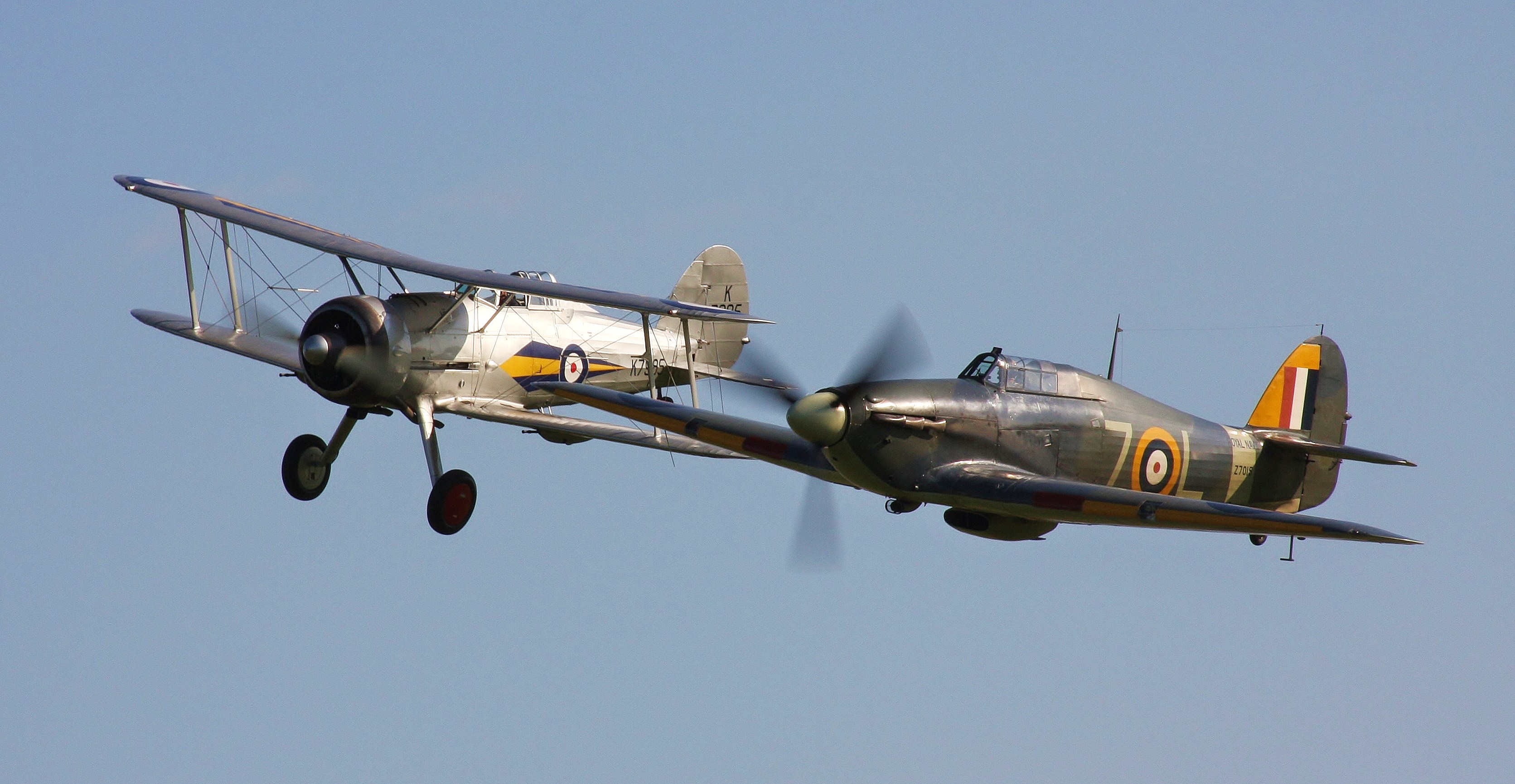 The Gladiator was the last biplane in RAF service, seen here with the Sea Hurricane. Photo: Alex Prins

The RAF’s last biplane fighter, the Gladiator has been displaying as a member of the Shuttleworth Collection since 1960. Following some tight topside formation flypasts, both aircraft were then displayed individually, with the hills of Bedfordshire reverberating to the throb of a Merlin and a Bristol Mercury engine in perfect harmony. 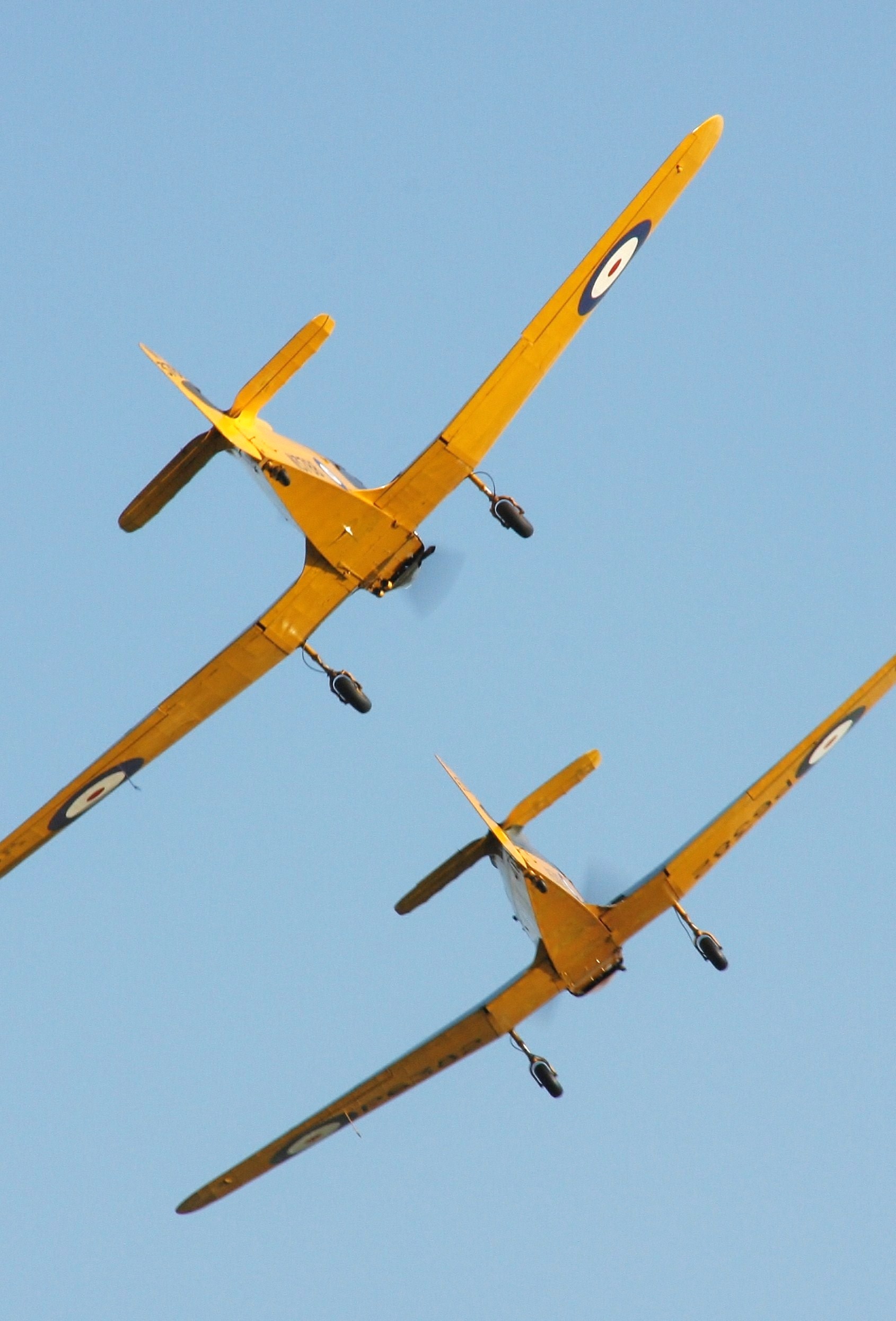 Shuttleworth’s pair of Magisters are painted in an attractive combination of yellow and camouflage. Photo: Alex Prins

Moving closer to the present, and the next display acts were two Miles Magisters, one belonging to the Collection and one to Peter Holloway. The Magisters joined the Piston Provost for a flypast before breaking off for a series of pair flypasts and individual passes.

The Piston Provost was the predecessor of the Jet Provost, which in turn became the Strikemaster. Photo: Alex Prins

This being the Shuttleworth Collection however, we were then once more transported further back in time, with a duo flypast by two 1930s aircraft: the Hawker Hind and Demon. By now the sun was creating a gorgeous light for the aircraft to display in, which when coupled with the clear blue skies, created not only fantastic photo opportunities but also a memory to treasure. Once this pair had landed we were treated to a pairs display by two WWI designs, the Royal Aircraft Factory S.E.5A and Sopwith Pup. 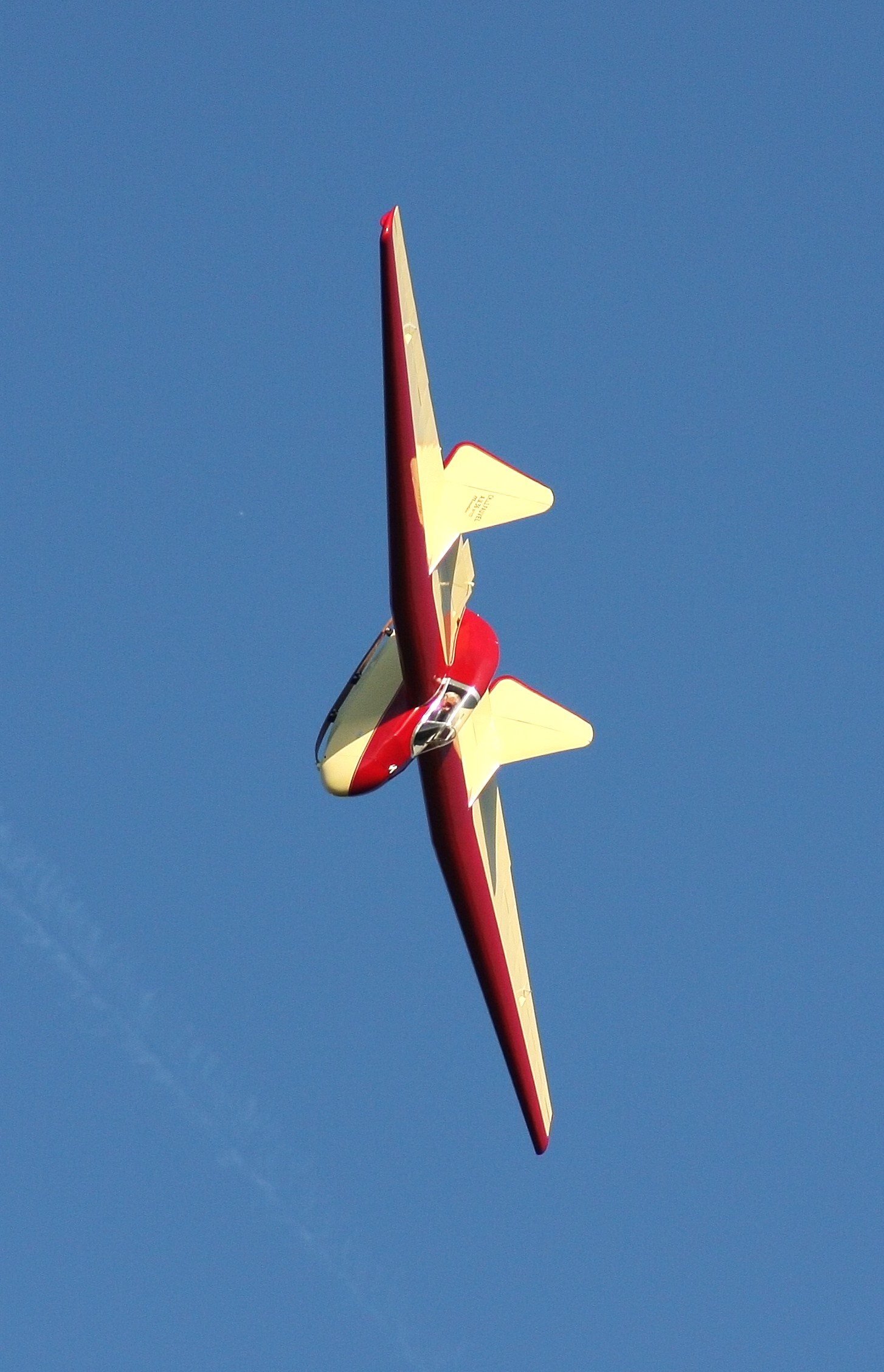 The Fauvel is perhaps one of the strangest-looking aircraft in the world! Photo: Alex Prins

While we didn’t it know at the time, the Fauvel AV glider was to be the final display of the day – and what a way to finish! Designed in the 1950s by Charles Fauvel, the glider was made with practicality low-cost in mind. The “AV” stands for ‘Aile Volante’ (flying wing) and this coupled with the minute cockpit allows the aircraft to perform breathtaking aerobatics. 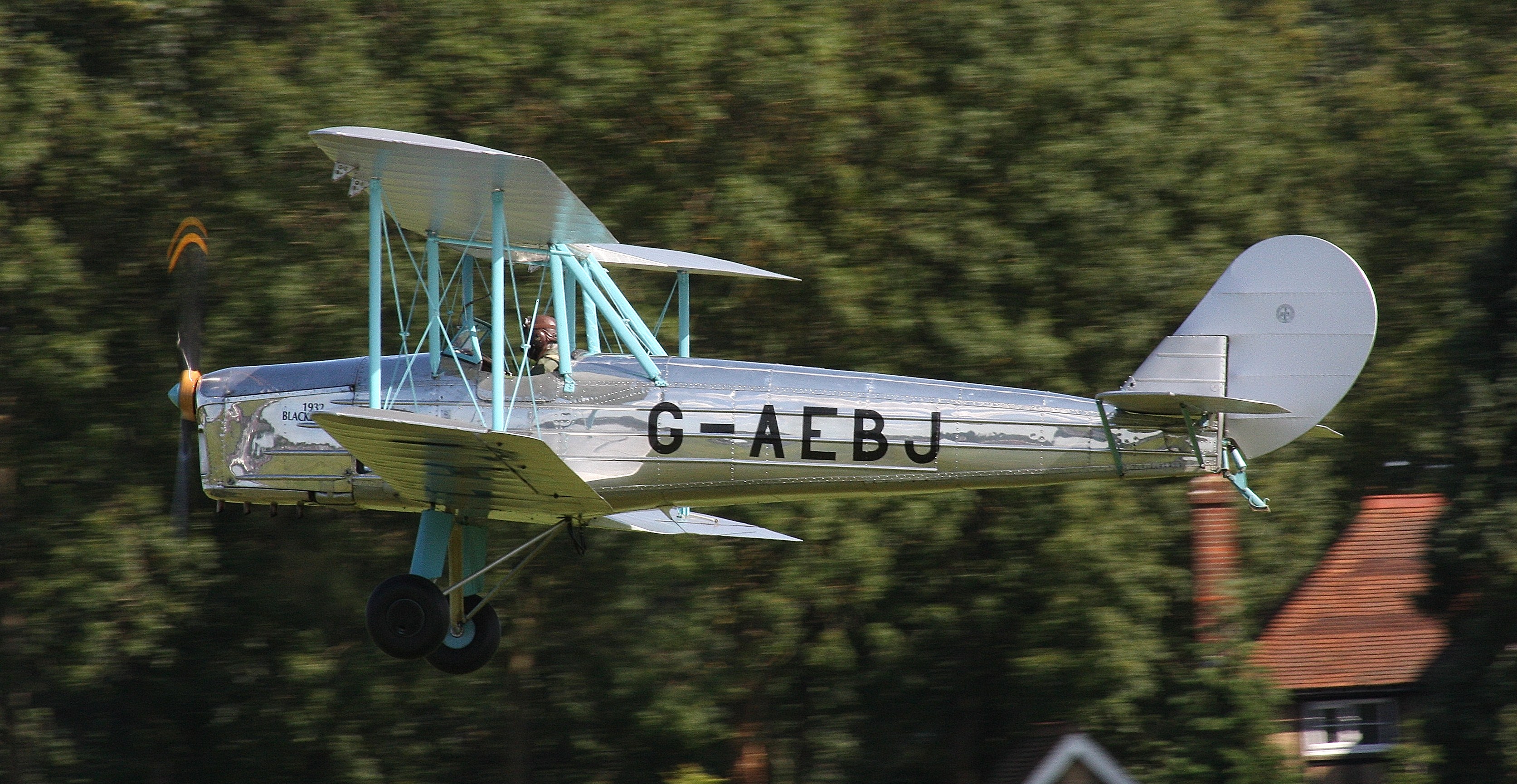 The Blackburn B.2 comes in to land on Old Warden’s grass runway. Photo: Alex Prins

One of the billed highlights was De Havilland Comet ‘Grosvenor House’ which only returned to flight last August and made its debut at the previous year’s Pageant, after a hiatus of 21 years. Hopes were high that it would take to the air after the wind dropped, and following the visitors’ departure slot, the engines were started. Unfortunately for the many hundreds who had patiently waited, a mag level drop in one engine resulted in the cancellation of the display. What was more frustrating was that the Comet had flown a practice display in the morning, before myself and the large majority of the crowds had arrived!

The other highlight of any Shuttleworth show is the collection of ancient airframes: ‘The Edwardians’ which rarely take to the sky due to low wind level tolerances. This proved to be the case as a light breeze picked up as the day progressed.

The orientation of the runway means that the sun is behind the crowd almost all day. Photo: Alex Prins

All-in-all then, Old Warden and its resident Collection put on an incredible day that showcased their aircraft in a manner that not only preserved the airframes for future generations, but entertained and amazed those present. I only had one gripe throughout the day, and it’s a small one – the commentator. While obviously enthusiastic he made a couple of mistakes with facts and kept referring to Peter Teichmann’s P-40 as being based in Duxford, not North Weald. However what was the most annoying was his constant plugging of the Vulcan’s appearance at the next Shuttleworth airshow in October. Whilst I realise that the Vulcan is a huge crowd-puller, his reminders almost every half an hour soon began to grate. It is testament to the show as a whole that this was my biggest complaint, top marks all round!

Alexander Prins is a UK-based photographer and aviation enthusiast who visits several major airshows each year.