Tom Wittevrongel was at the Langkawi International Maritime and Aerospace Exhibition (LIMA), which took place between 17 and 21 March at the Langkawi International Airport. It is one of Asia’s most prestigious aerospace, maritime and defence events attracting some 160,000 public visitors and 40,000 trade visitors. The first three days are trade days, followed by two days that are open to the public. During these days the flying display is slightly longer. 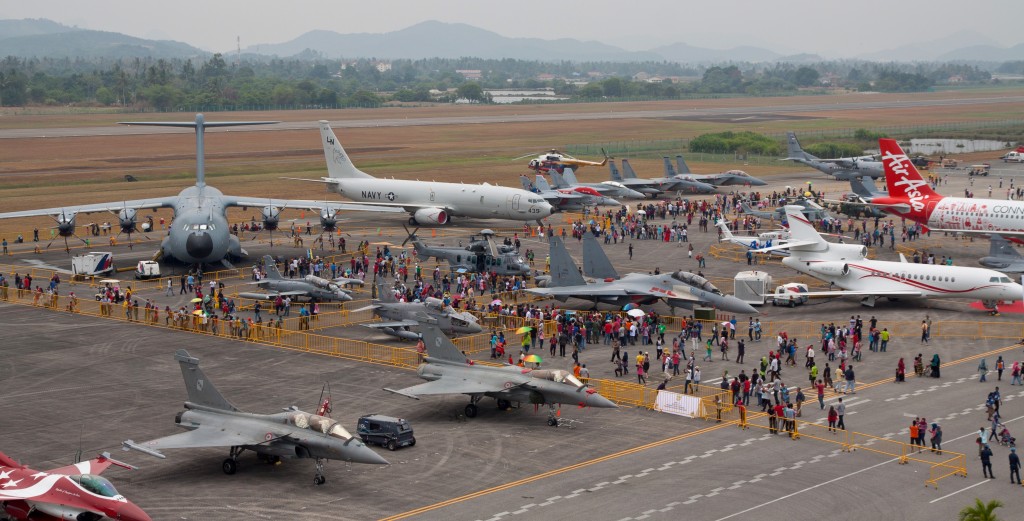 The line up looked stunning with the Black Knights from Singapore, Al Fursan from the United Arab Emirates, Jupiter Aerobatic Team from Indonesia, Russian Knights from Russia, August 1st from China and Krisakti from Malaysia. Solo displays came from Thailand with the Gripen, France with the Rafale, US with the F-16 and B-52 and Malaysia with the Su-30MKM. 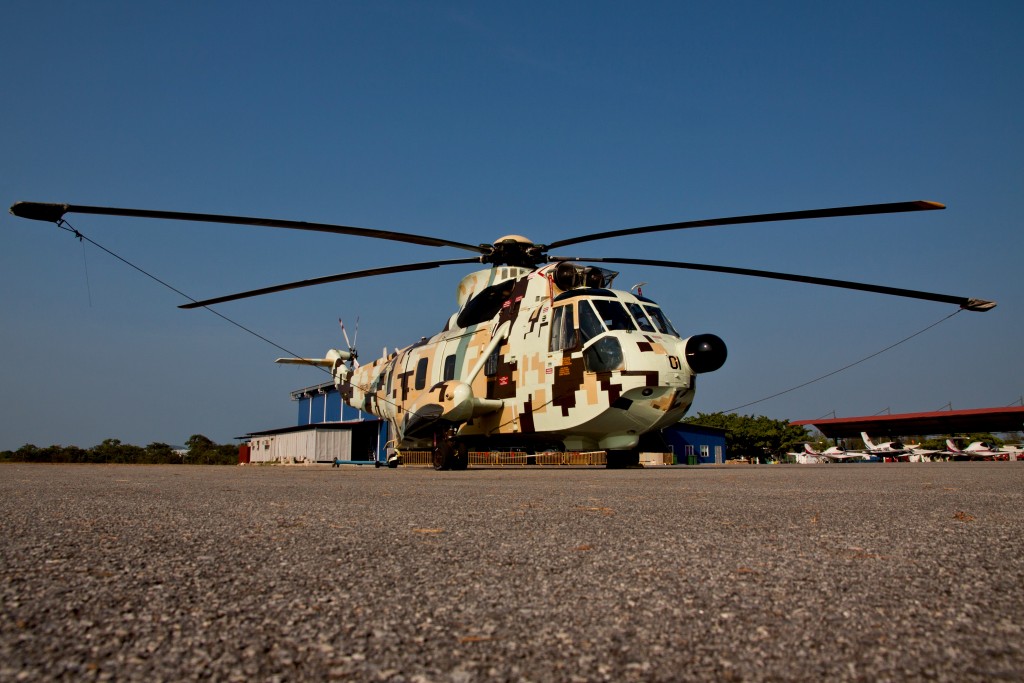 Unfortunately a week prior to the show the Russian Knights  and Thai Gripen cancelled their participation, and then just before the opening the unfortunate crash by the Jupiter Aerobatic Team lead to the cancellation of the team for the airshow. These last minute cancellations were severely felt in the flying display which lasted a bit more than one hour rather than two hours as initially planned. 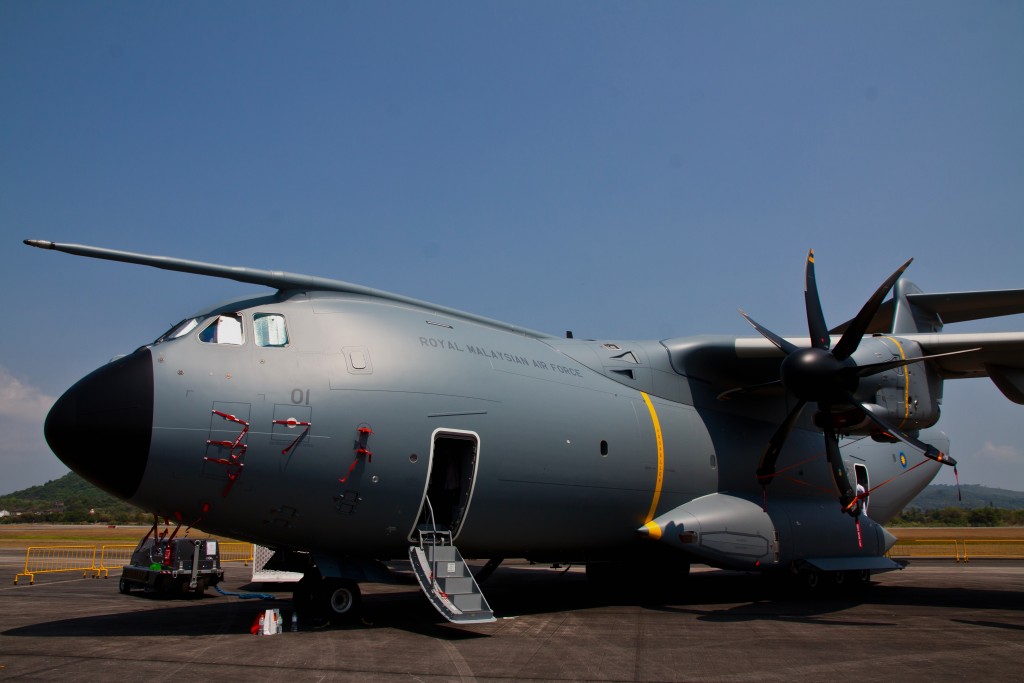 The weather during LIMA ’15 was as expected extremely hot, with temperatures above 35ºC. Combine this with the high humidity and the intensity of the sun and it made photography somewhat challenging to say the least! 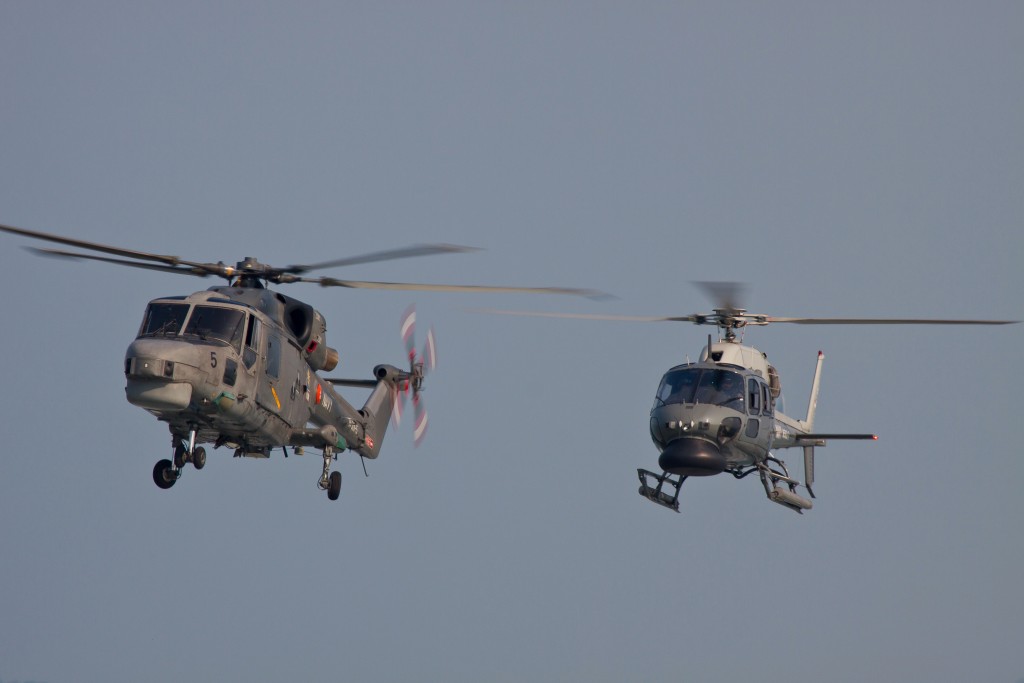 Away from the airport, there were maritime displays by various Malaysian operators. Photo: Tom Wittevrongel

As is usual at LIMA, the Royal Malaysian Air Force (TUDM), Army (TDM) and Navy (TLDM) were well in evidence with their aviation assets, supported by aircraft from the Malaysian Maritime Enforcement Agency (MMEA), the Fire & Rescue Department (BOMBA) and the Royal Malaysian Police. Unfortunately I missed the opening of the show and so also the spectacular air power demo by the Malaysian Air Force showcasing their latest asset, the Airbus A400M. Other assets on display included the Su-30MKM, F/A-18D, Hawk Mk.208, MB-339CM and EC-725AP. 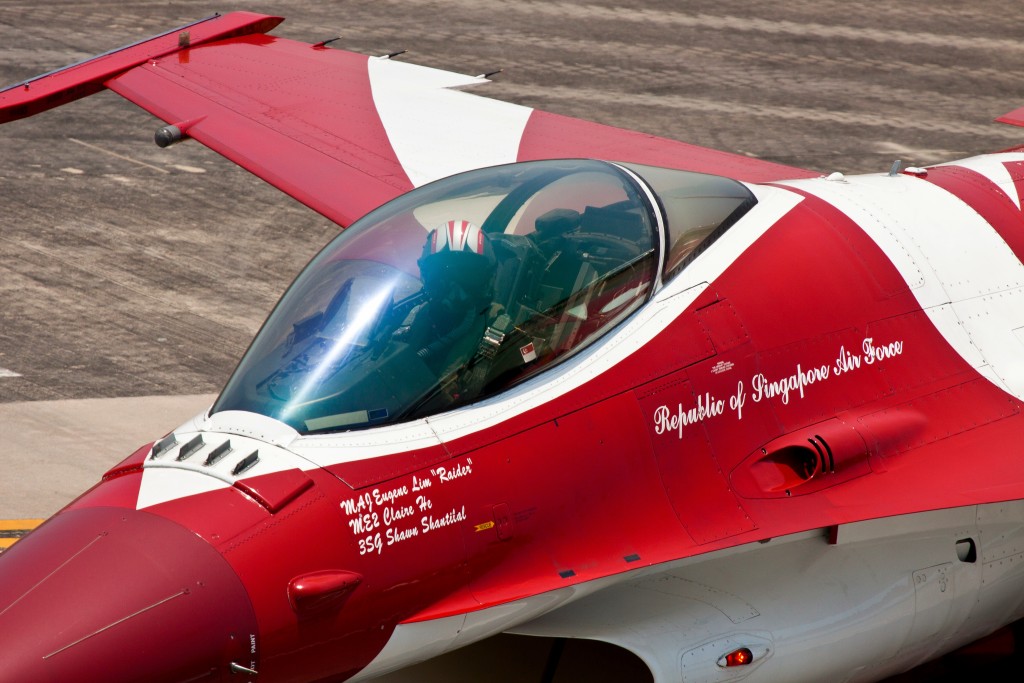 An F-16 of the Black Knights during the ‘ground launch’ before each show. Photo: Tom Wittevrongel

The static was of course dominated by the Malaysians although the Americans were also well presented with a pair of F/A-18F Super Hornets, a P-8A Poseidon and a MH-60R Seahawk from the Navy, a couple of F-15D Eagles from the Air Force and a UH-1Y Venom from the Marines. A rarely seen Falcon 20 from the French Navy, a Thai Gripen and a new C295MPA from the Indonesian Navy could also be found. 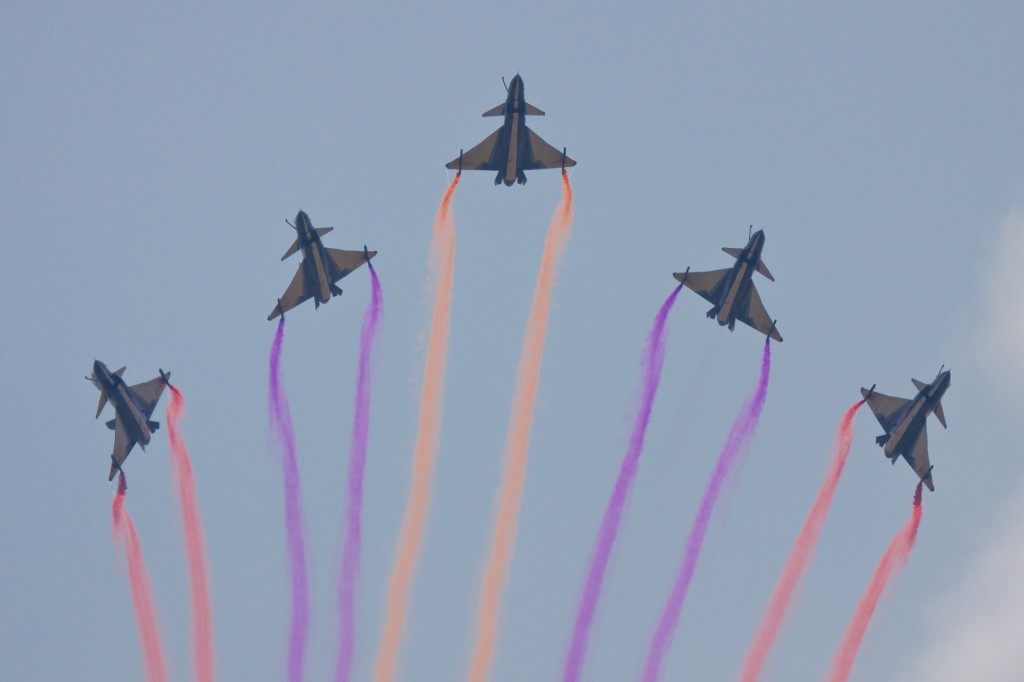 August 1st were the star attraction for many, with their six J-10s. Photo: Tom Wittevrongel

The star attraction at LIMA came from China in the form of their national aerobatic team, August 1st. It was only their second performance outside of China. The team flies the Chinese-built Chengdu J-10. The display itself was well timed and well performed; the formation changes follow each other on a good pace and the changes from 6-ship to 4-ship and solos are well executed using the agility of the J-10. The team had me really hooked. The colour of the smoke is also somewhat unique using purple, orange and pink. I was also amazed by the performance of the J-10; let’s hope that they continue to attend foreign shows. 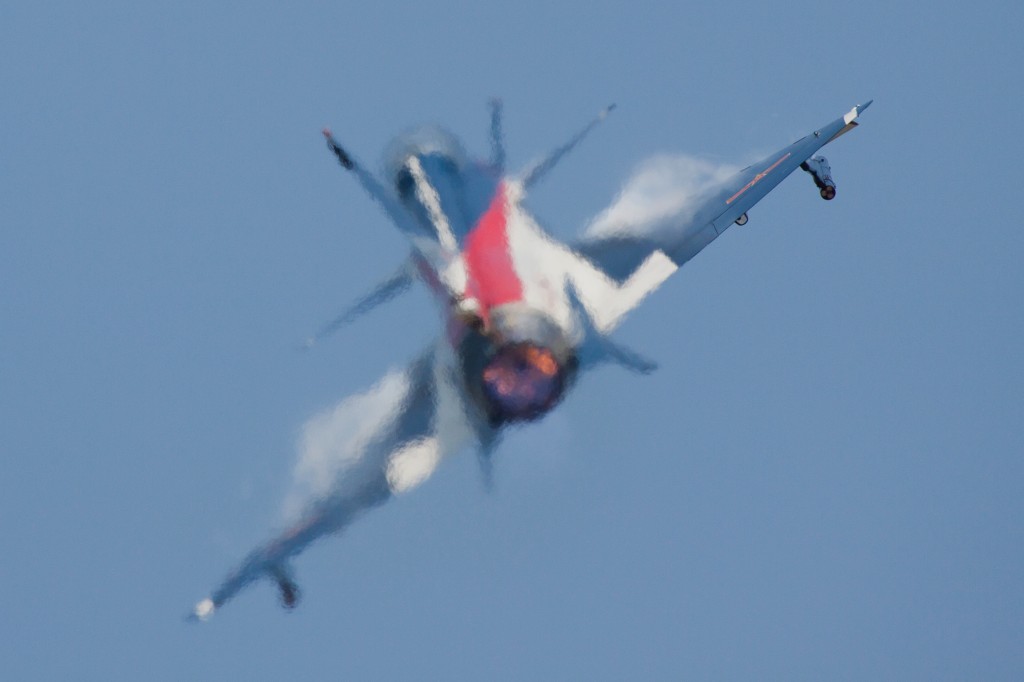 The powerful J-10 easily gets lost in its own heat haze! Photo: Tom Wittevrongel

Performing their second and last display outside Singapore was the Black Knights duo. The display contains some 2-ship passes followed by some opposing passes and some solo manoeuvres showcasing the F-16. A pity that they couldn’t come with the complete team of six jets but nevertheless an interesting display by a team that will stood down this year. 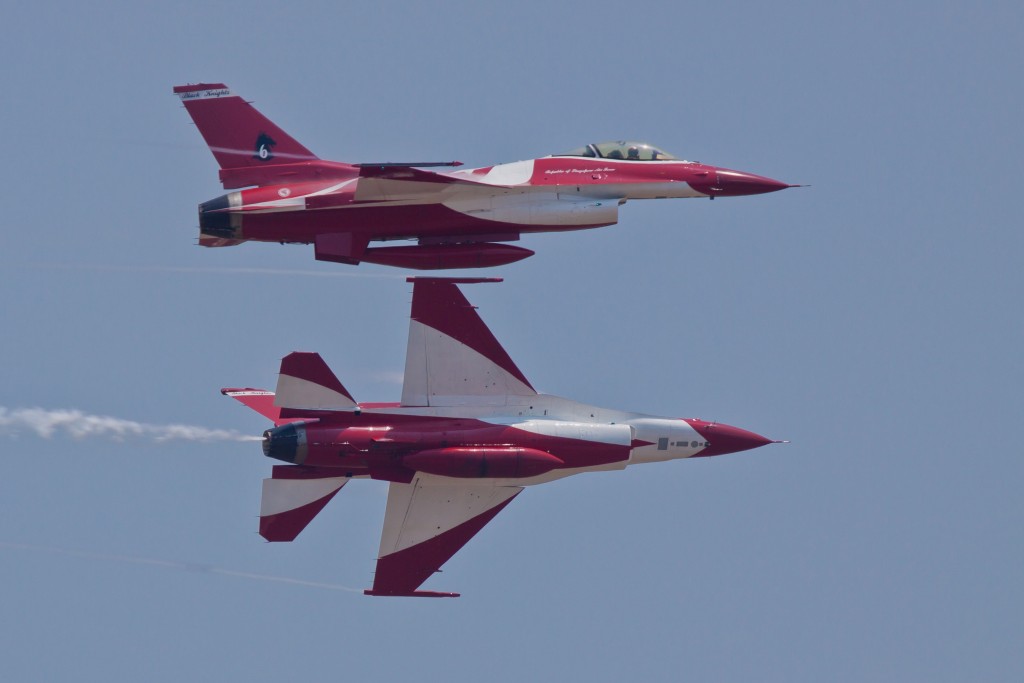 EDITOR’S NOTE: a documentary on the Black Knights is due for release in September 2015. We also covered their first display in 2014 and will cover their last 6-ship in August 2015. 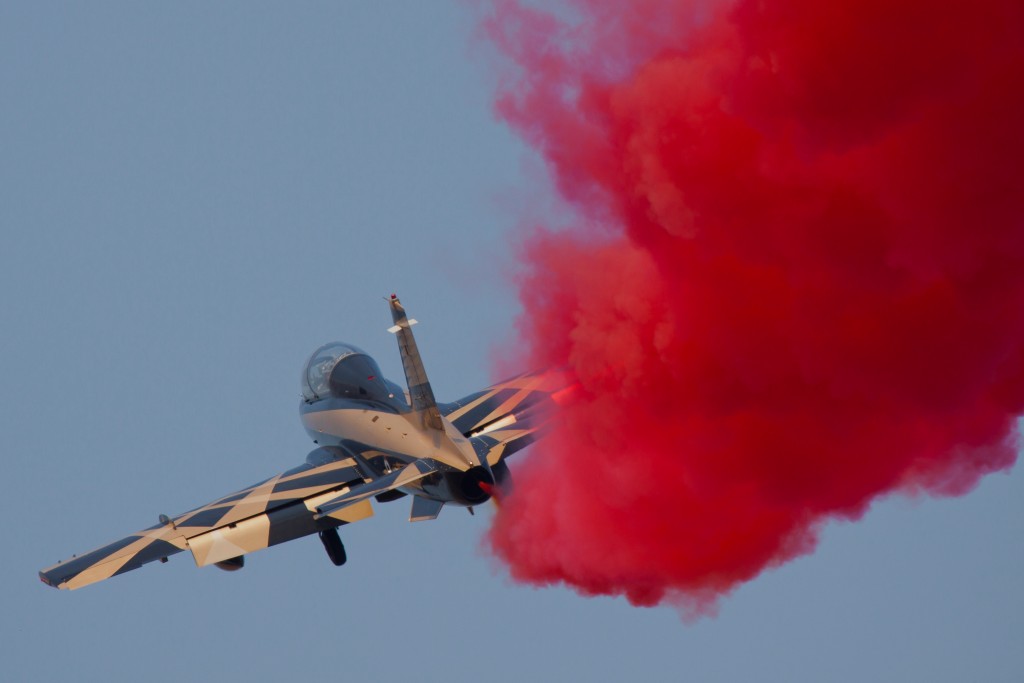 Being trained by the Italian Frecce Tricolori and flying the same aircraft, the MB-339, Al Fursan flies an enjoyable display featuring a mix of some “European” manoeuvres but with a Middle Eastern touch. However, on Saturday their thick coloured smoke obscured a part of the display as there wasn’t enough wind to blow it away! 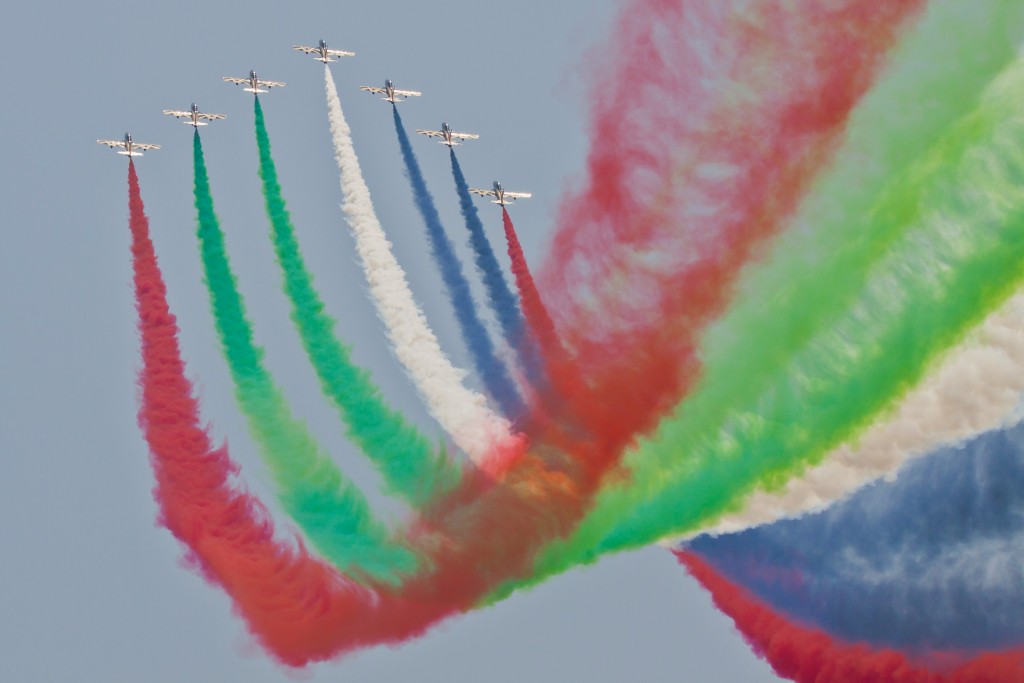 Al Fursan are the only team in the world to use black display smoke. Photo: Tom Wittevrongel

Malaysia’s own stunt team, Krisakti, fly the Extra 300. The display shown at LIMA contained the four ship with the an Edge 540 flying solo manoeuvres. The interaction between the two was not always that well timed leaving some gaps between the passes. 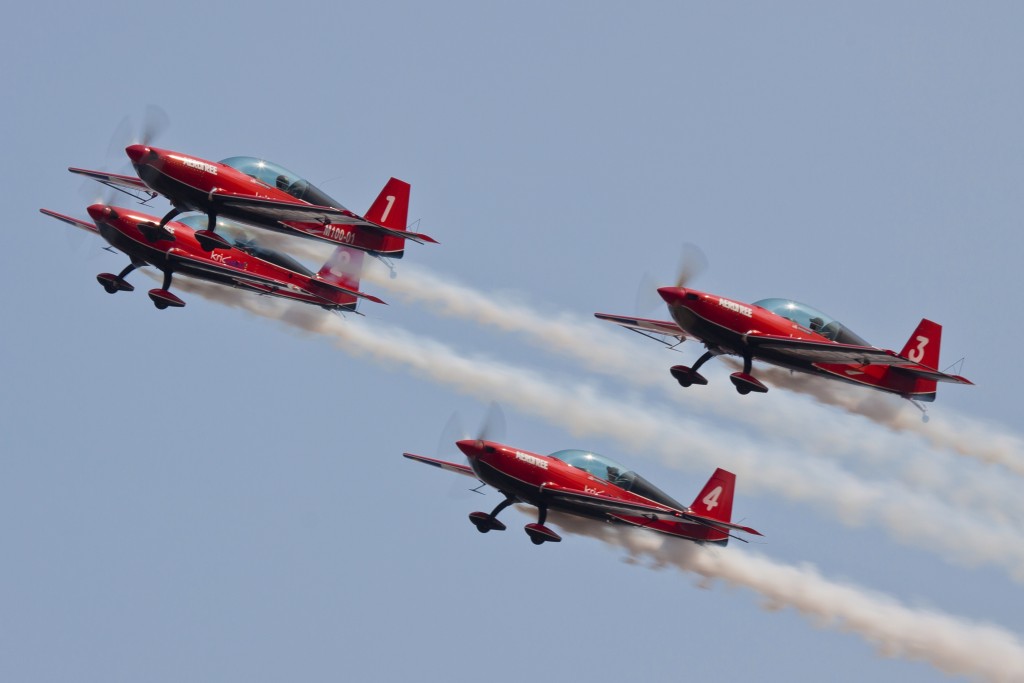 Having seen the Rafale display from France a couple of times it stills keep amazing me how attractivly this display is flown. The display keeps the jet well within the sight of the public. Of course this means that the pilot has a really tough job because he hasn’t got any time to rest during his 10 minute showcase! 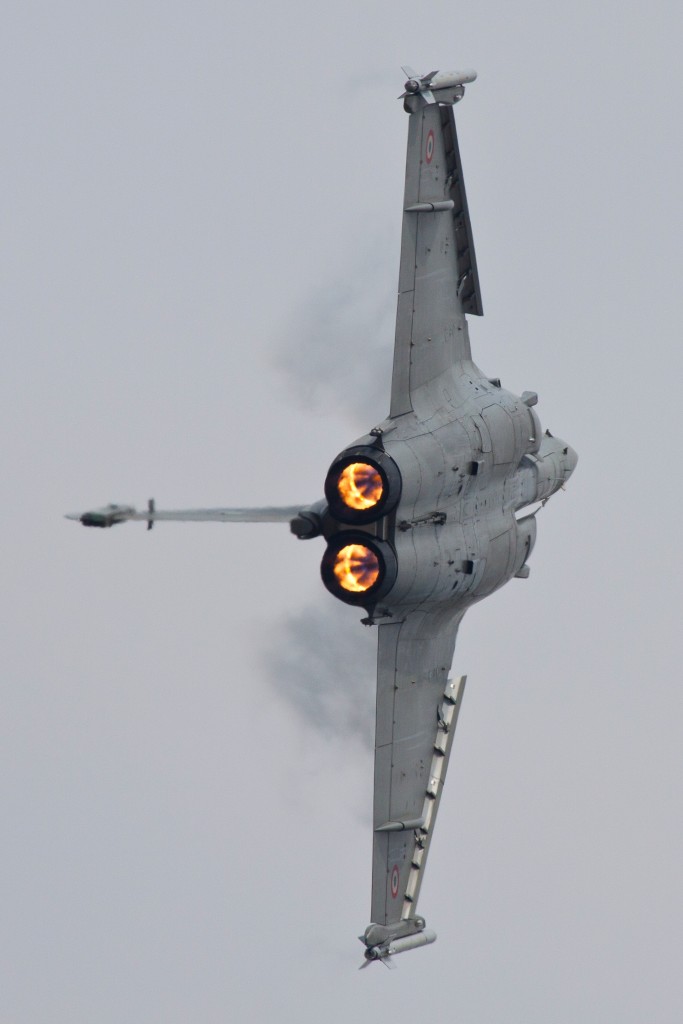 The Dassault Rafale is one of the most impressive jet demonstrations in the world. Photo: Tom Wittevrongel

While the Rafale tries to please the public with staying in sight as much as possible, the F-16C of the Pacific Air Force Demonstration Team demonstrates the capabilities of the jet. High speed passes, high-G turns and combat manoeuvres are seen here, although this means the aircraft spends some time out of sight of the crowd. 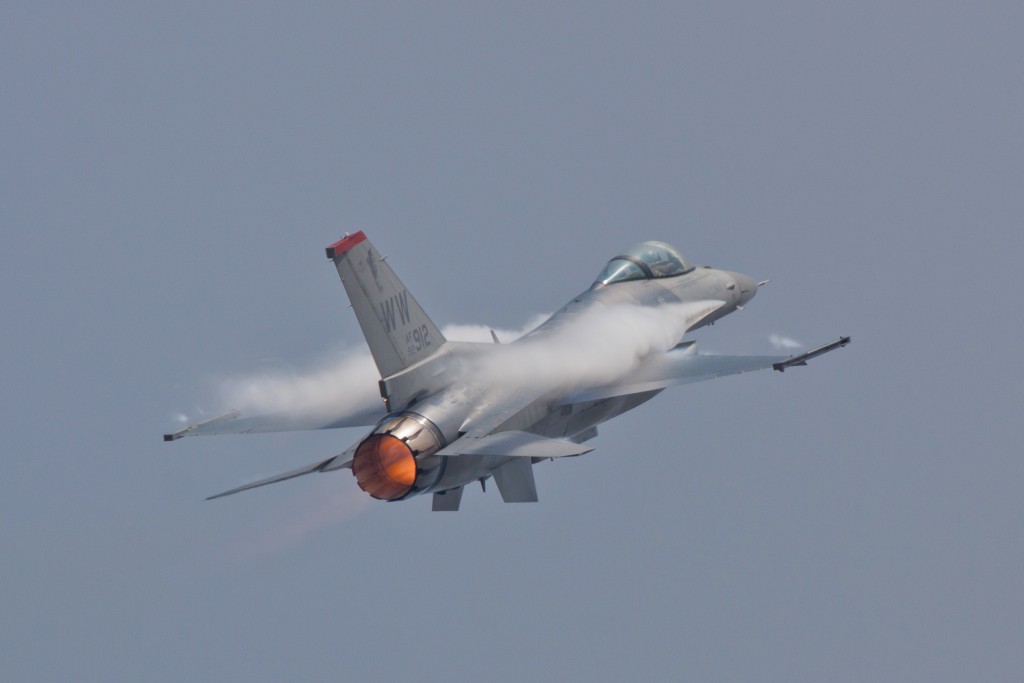 The Su-30MKM, however, was in a league of its own at LIMA. Helped by its thrust vectoring nozzles, it can do manoeuvres which were previously impossible with jet aircraft. Standing between the public on one day, the “ooohs” and “aaaahhs” came with every manoeuvre and at the end a loud cheer and applause was given to the crew – it was well deserved, too. 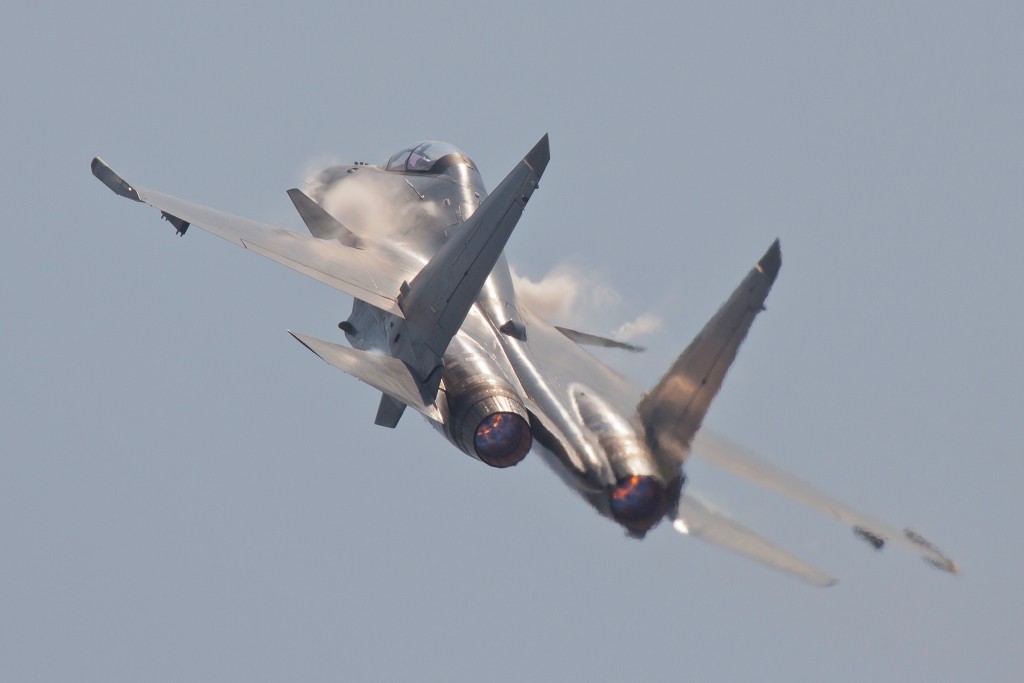 The Su-30 was ‘in a league of its own’ thanks to omni-directional thrust vectoring. Photo: Tom Wittevrongel

In addition to the aircraft at the airshow there were also some helicopters on display at the maritime exhibition. Each day there was also a demonstration taking place at the harbour showing off the skills of the MMEA, the Malaysian Police or the Malaysian Navy. 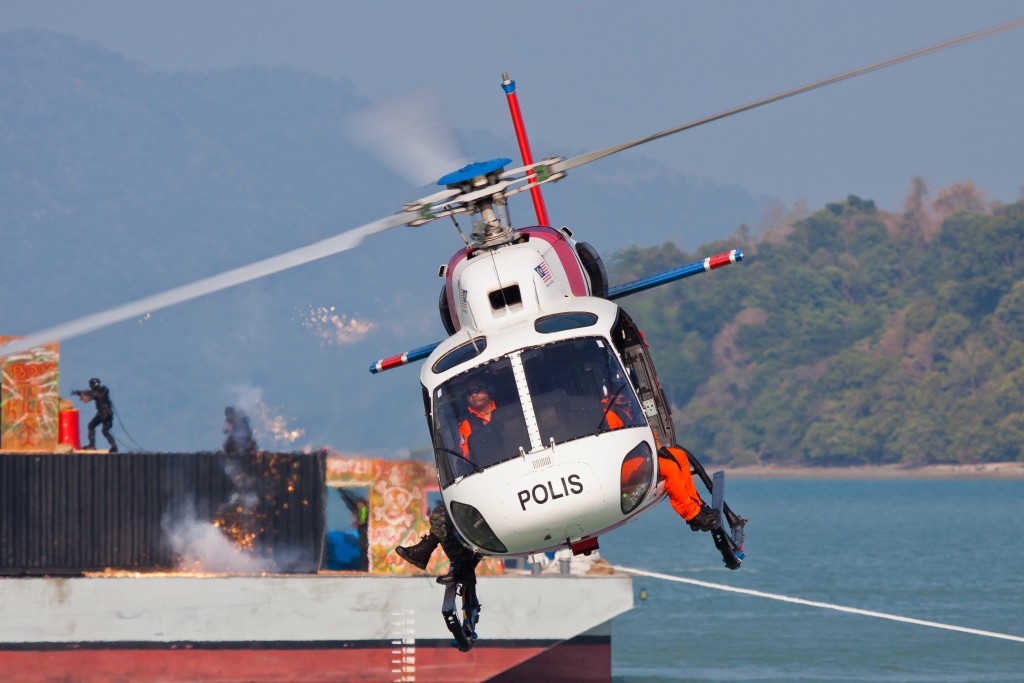 This AS.355F2 has just deposited policemen on the hostile vessel in the background. Photo: Tom Wittevrongel

The MMEA showed a search & rescue (SAR) display with one of their AS.365 Dauphin helicopters as well a dramatic water-bombing demonstration by one of their Bombardier CL-415 aircraft. The Malaysian Police demonstrated the rescue of some hostages at a vessel. This was enhanced with pyrotechnics and included some very nice flying from the pilots. The Malaysian Navy used the Fennec and Super Lynx to drop two frogman into the water and later also enter a hostile vessel with the necessary pyrotechnics. 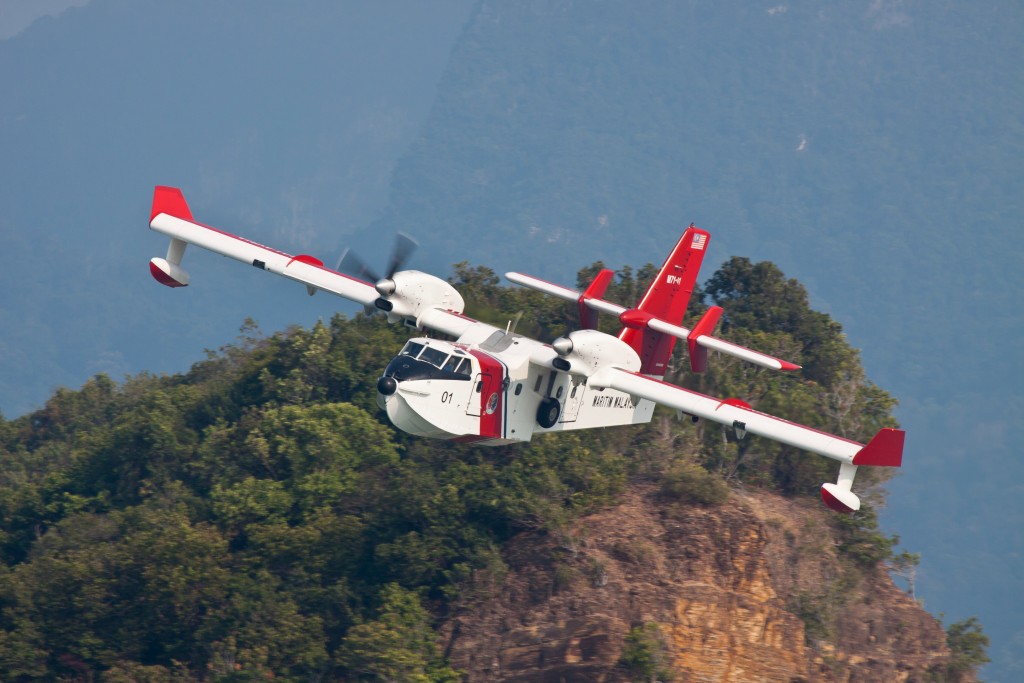 In the morning and evening the Malaysian C-130s come in and out bringing people or equipment. Occasionally you can also get a Singapore, Indonesian or Thai transports at this time. During the show I tried five different locations to try to get some different angles and take into account the position of the sun. The humidity caused quite some haze in the air so aerial shots are tough to get. Only on Saturday morning the sun stayed behind the clouds. 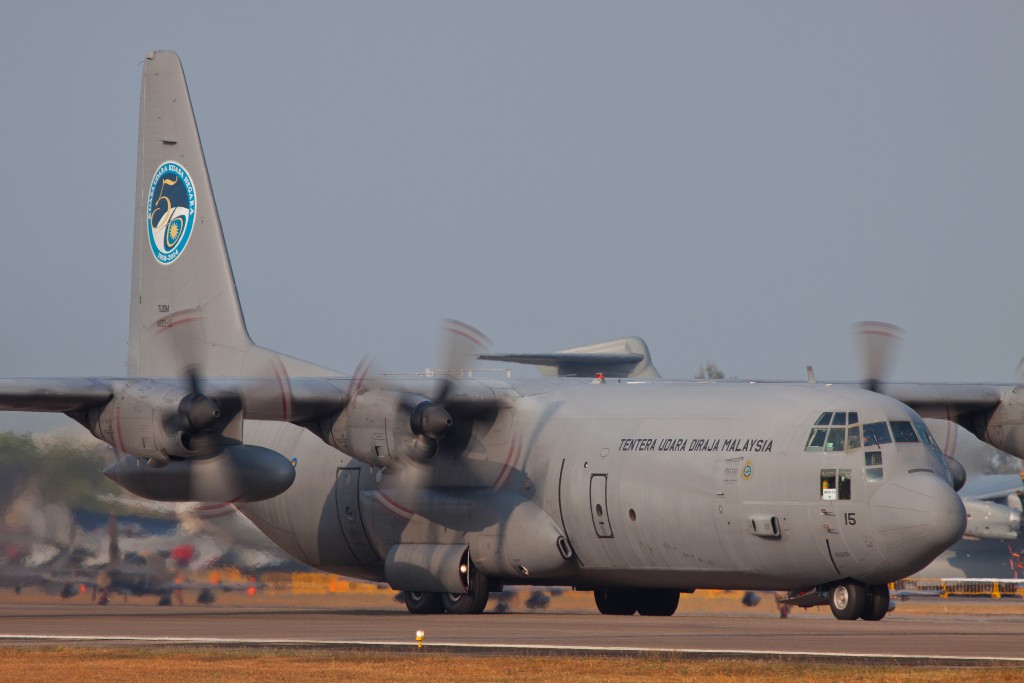 Transport types, like this C-130, arrived most mornings and evenings. Photo: Tom Wittevrongel

LIMA 2015 felt the last minute cancellations in the flying display but it still had some highly entertaining and unique displays, and the maritime display also left a huge impression on me.

Tom Wittevrongel is a Belgian photographer who works in the aerospace industry. He runs the blog Milijets.