Static displays aren’t usually the highlight of an airshow, but at the 2015 Barksdale AFB Defenders of Liberty Airshow and Open House that was the case for me. My earliest memory from an airshow was seeing an odd-looking craft humorously called the 377PG Pregnant Guppy. I didn’t care about its rarity or its important mission supporting the NASA space effort, I just loved the name. It also helped that I had a fish tank at home filled with – you guessed it – pregnant guppies. This plane really did resemble the little fish. 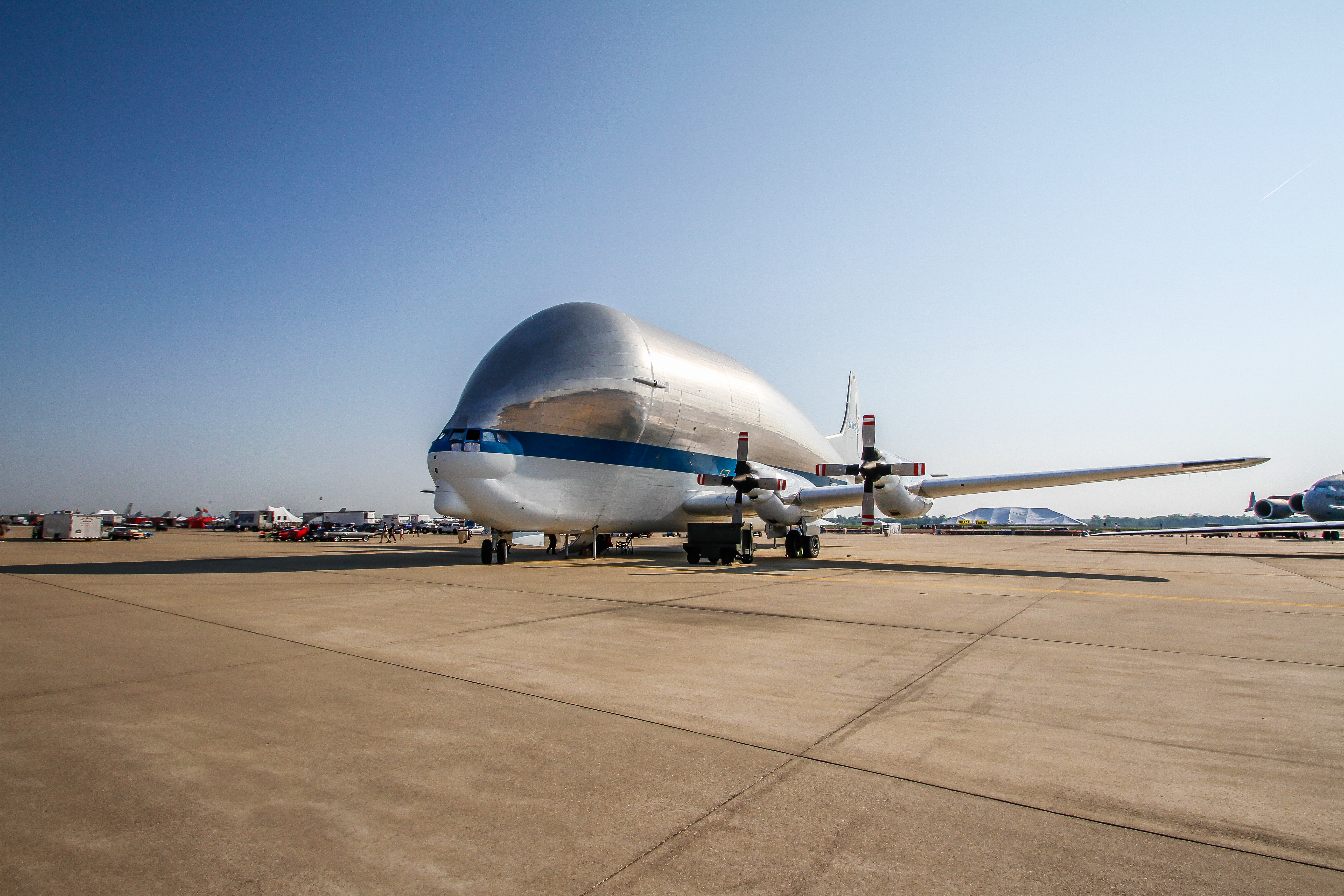 The “Guppy” was used both by NASA and by Airbus Industries. Photo: David Leadingham

It’s been decades since that show and I hadn’t seen a Guppy since, until this show. The B-377-SGT-F Super Guppy made this rare appearance between missions. It is one of only five Super Guppies ever built and is the only one still flying. The Guppies transported everything from Saturn rockets to modules for the International Space Station, and it can hold two T-38s with room to spare. 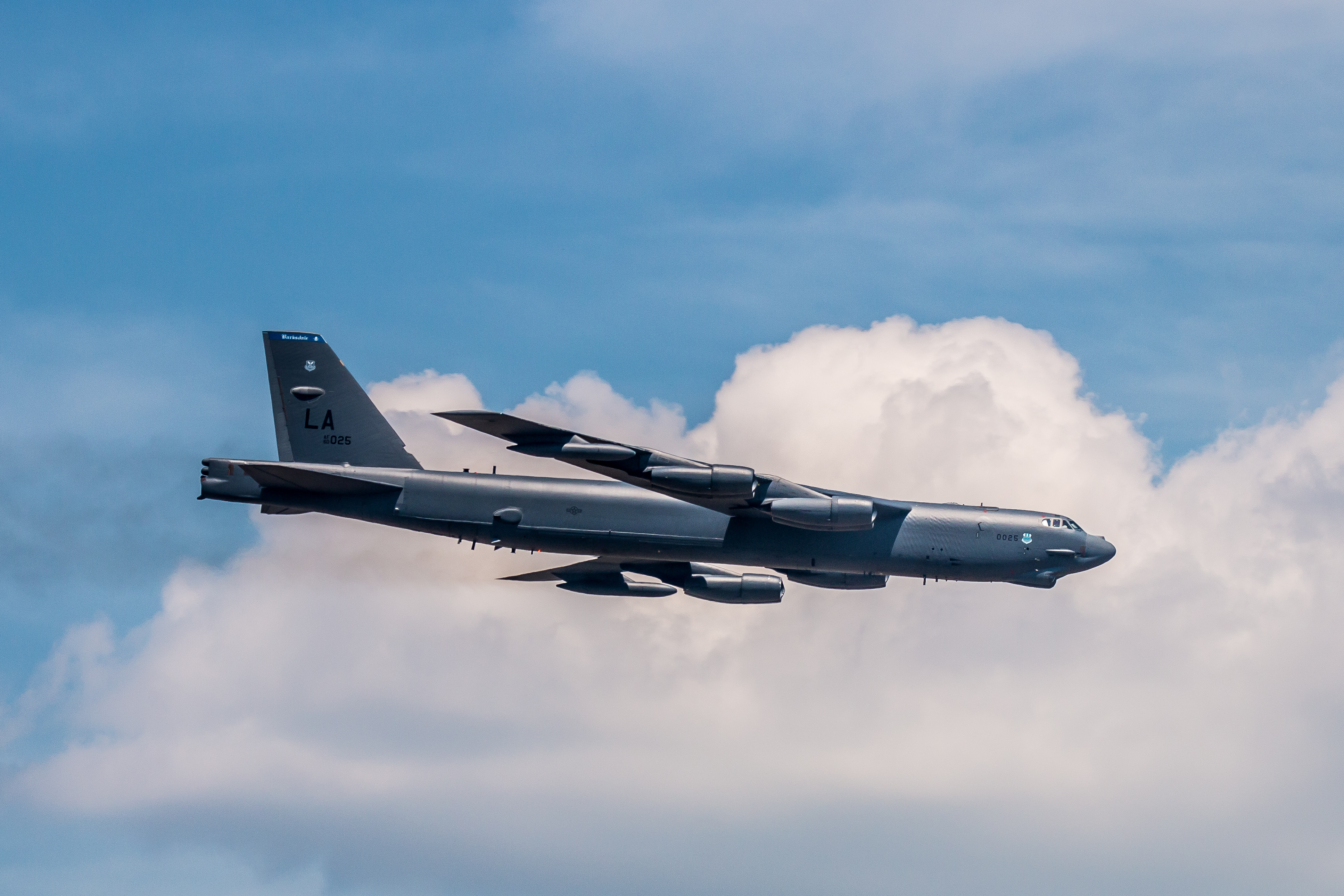 B-52s appeared on static display and in the air. Barksdale it itself a B-52 base. Photo: David Leadingham

We arrived at the base as soon as the gates opened and I had the privilege of being one of a handful of people to be allowed to board the Super Guppy and tour the interior. From the outside it looks large, but on the inside it is positively cavernous. Those few minutes on-board made the whole show for me. 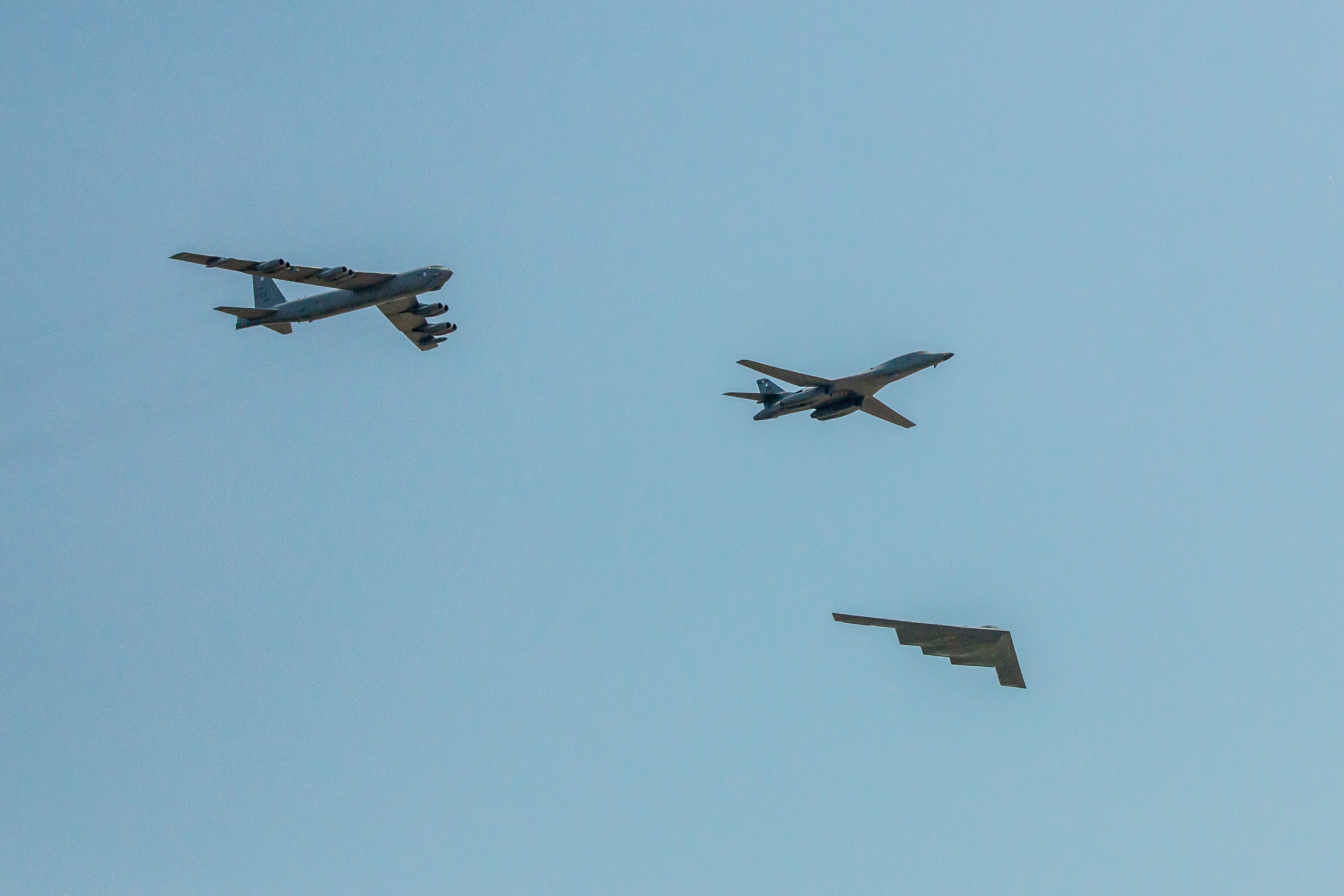 But this was soon followed by another rare treat. The show opened with a flyover by a B52H Stratofortress based at Barksdale, accompanied by a B-1B Lancer and a B-2 Stealth Bomber. What an impressive display they made crossing the airfield in formation. 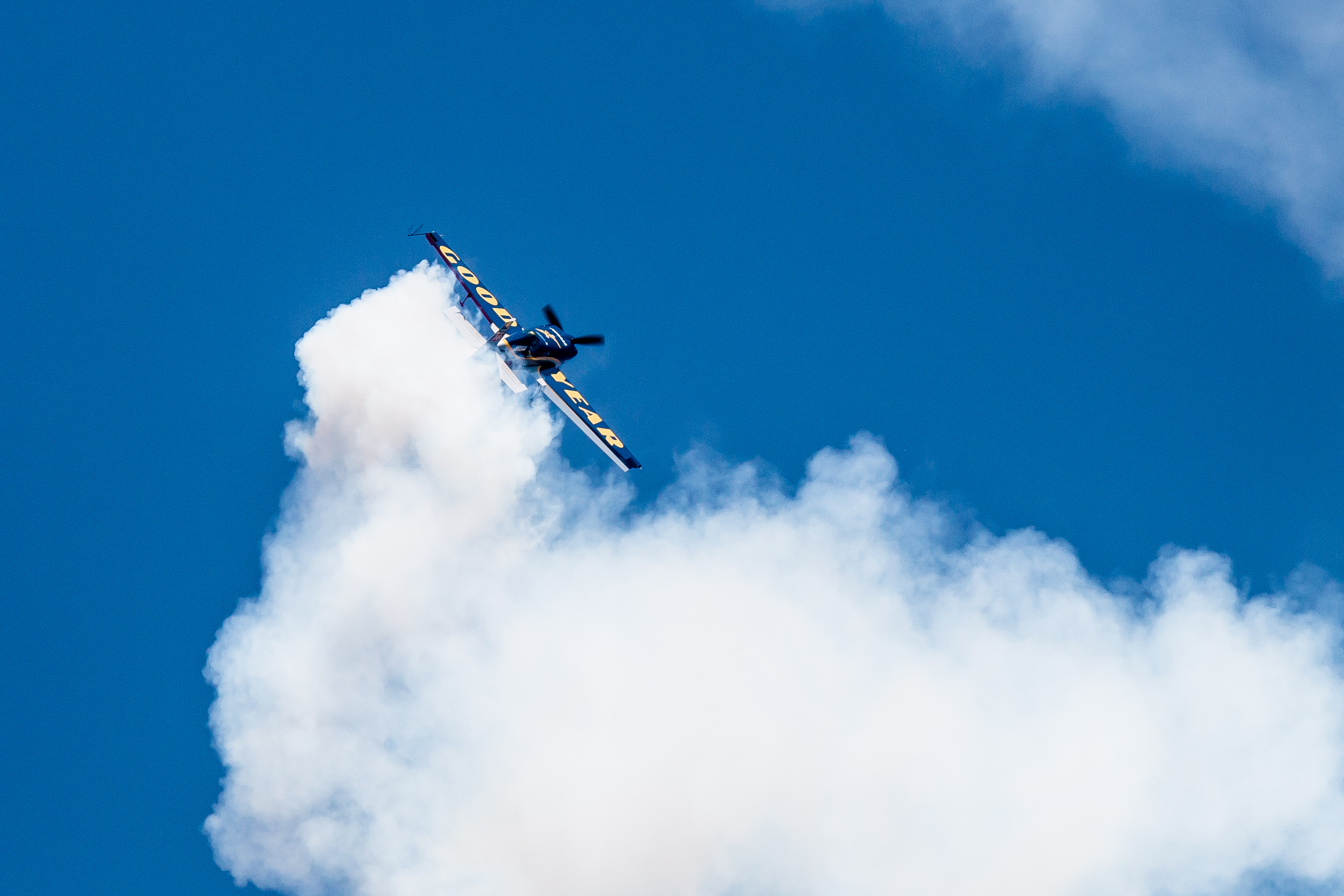 There were a number of aerobatic demonstrations by Air Force pilot Jeremy Holt in a Skybolt biplane, Dave Leedom, a Colonel in the Air Force Reserves, in a Pitts Special, Kevin Coleman, a Louisiana native in an X300 Cobra, Rob Holland in his MXS-RH, and Michael Goulian in his Extra 330SC. 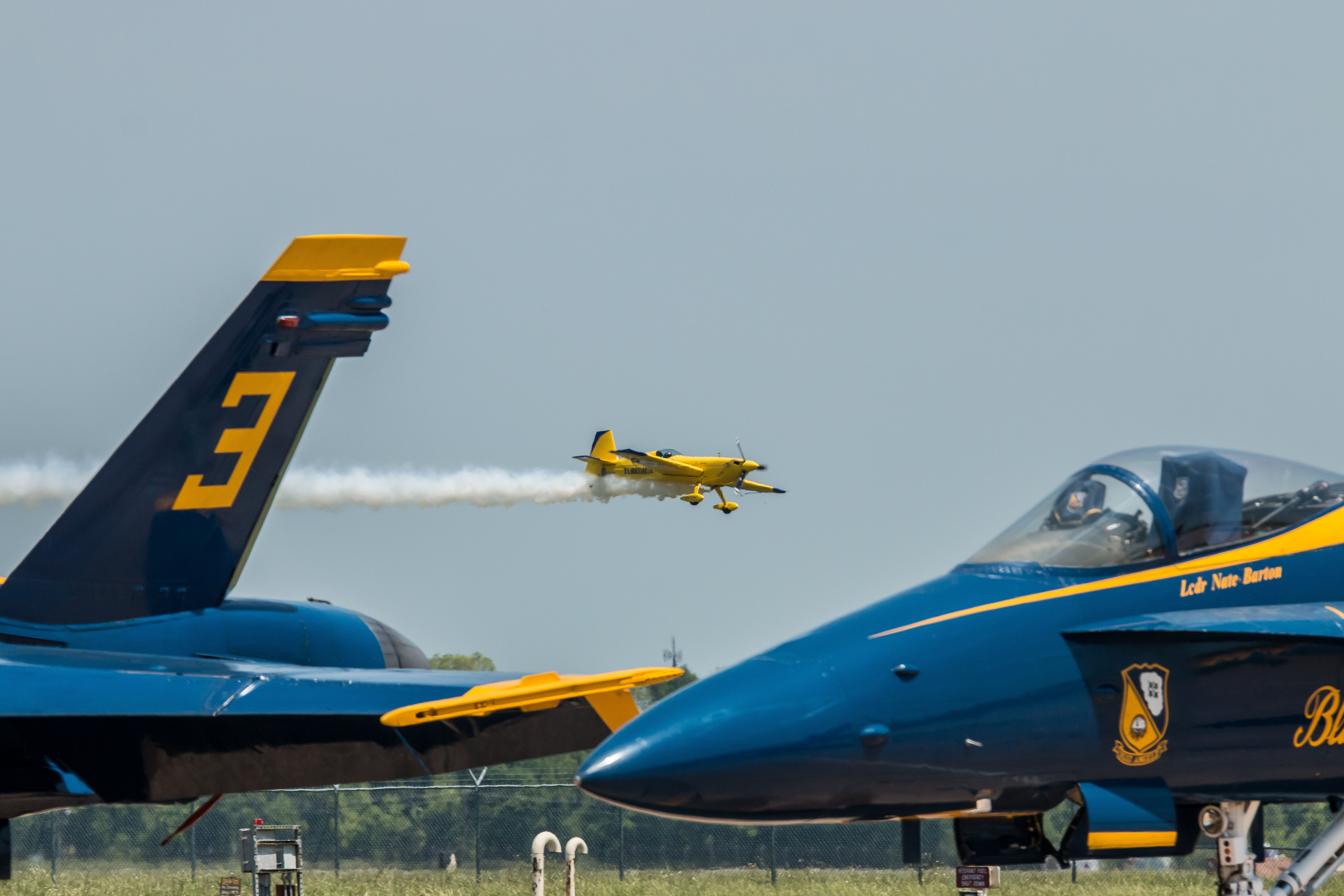 The B-25 Mitchell bomber, the “Show Me”, was one of the planes that participated in the 1942 raid on Tokyo, It made several low passes including one with the bomb bay doors open. 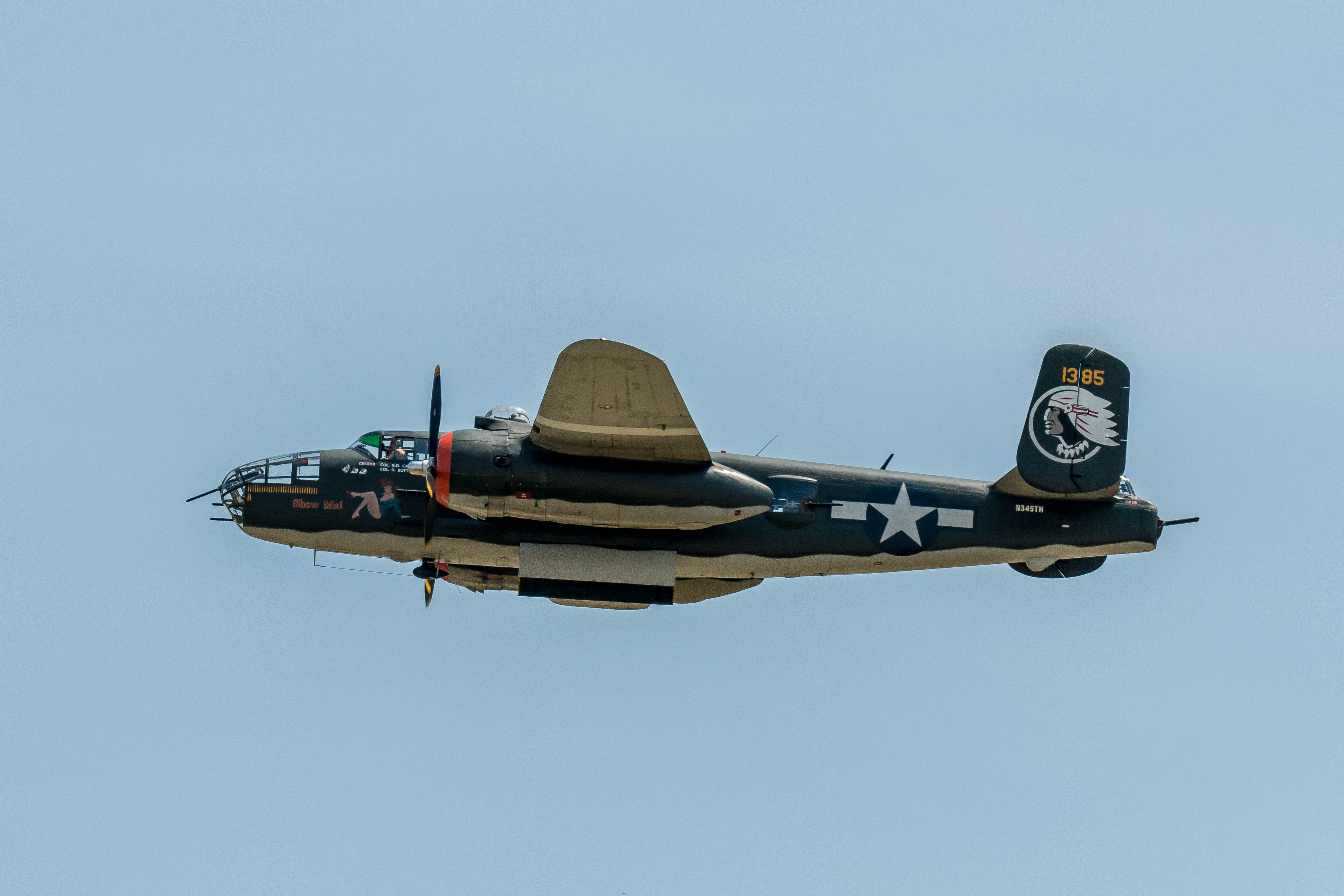 The B-25 was one of many heavy bombers used by the USA in WWII. Photo: David Leadingham

Randy Ball flew his MiG 17-F that he spent four years restoring. He reached Mach .94 on one pass, just under the limit the FAA allows. 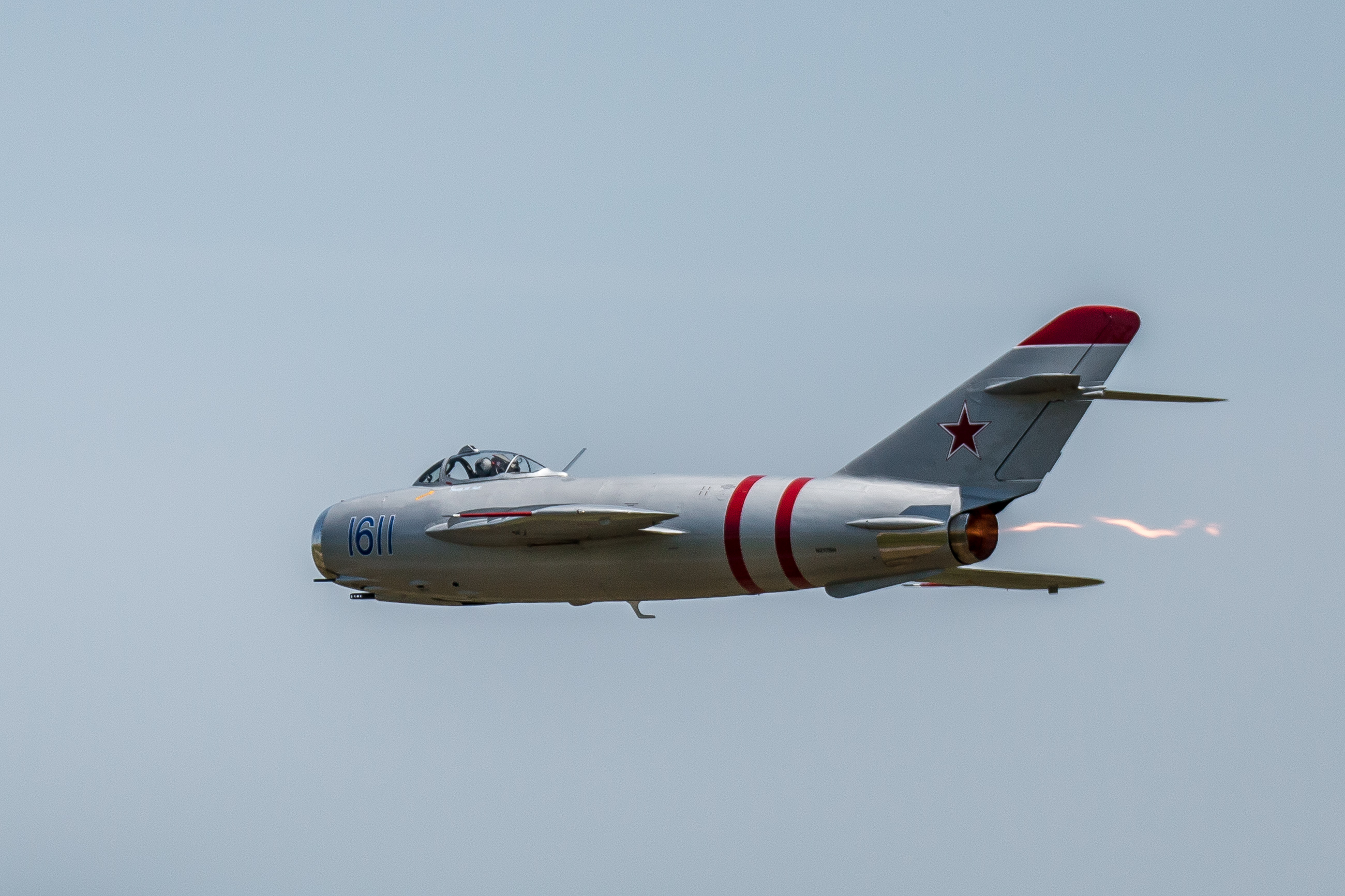 The MiG-17 is a development of the MiG-15, the most-produced jet aircraft in history. Photo: David Leadingham

Scooter Youk flew a P-51 Mustang. He restored it over a 14 year period using parts from 200 Mustangs. It made an odd whistling sound on high speed passes which the narrator said came from the #3 gun barrel on the left wing. This whistle turned to a scream when the plane was put into a tight, high-speed turn. 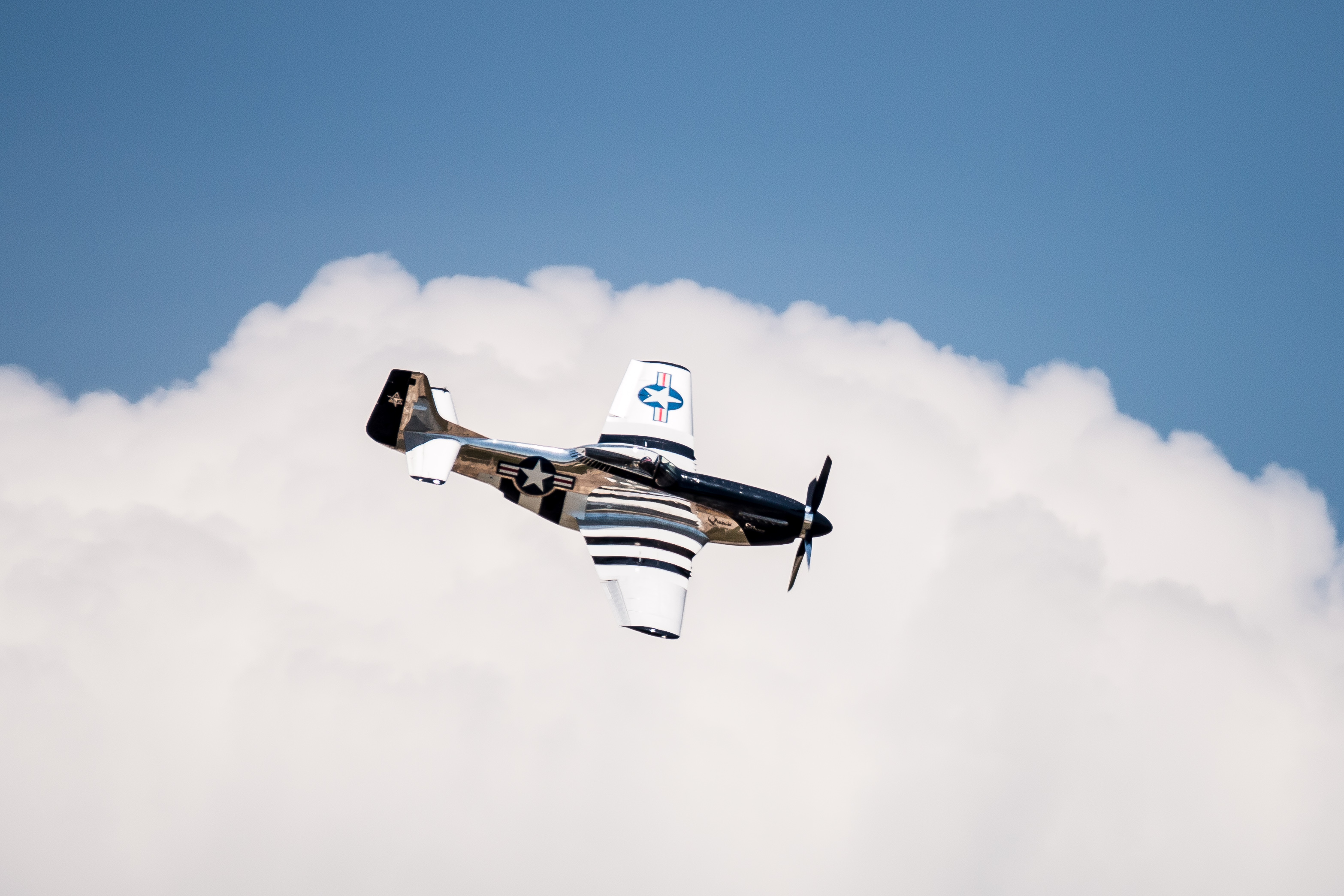 The P-51 is one of the most famous and successful aircraft of WWII. Photo: David Leadingham

The oldest flying A-26B Invader “Lady Liberty” looked great for her age. She has patches in her tail that were repairs made after damage from German aircraft guns. 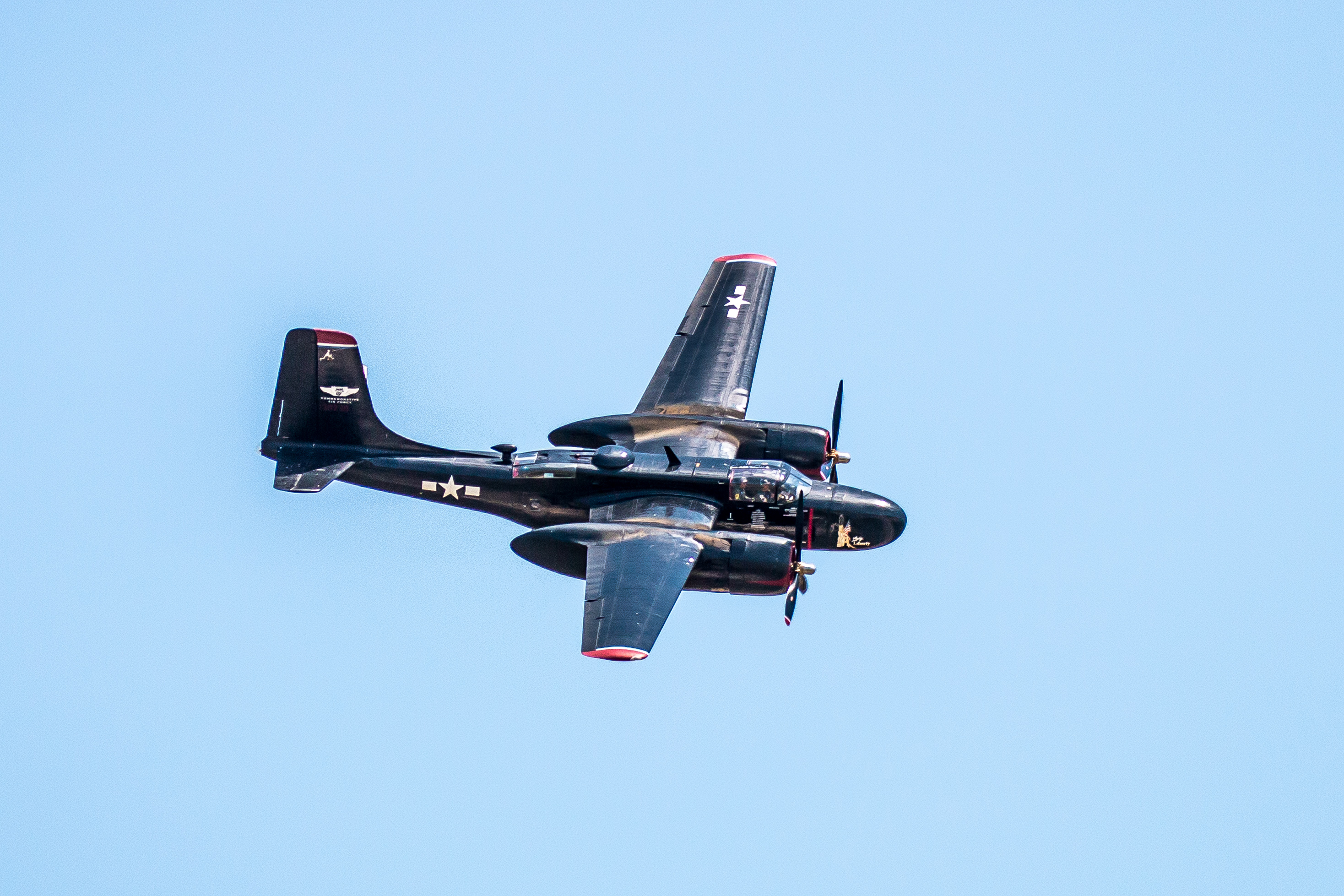 The A-26 was an integral part of the WWII campaign against Nazi Germany. Photo: David Leadingham

Sgt. 1st Class Jennifer Espinosa opened the U.S. Army Parachute Team’s demonstration, and after landing went on to narrate their show. The Golden Knights, as they are known, put on an impressive demonstration of the skills needed to be a paratrooper. 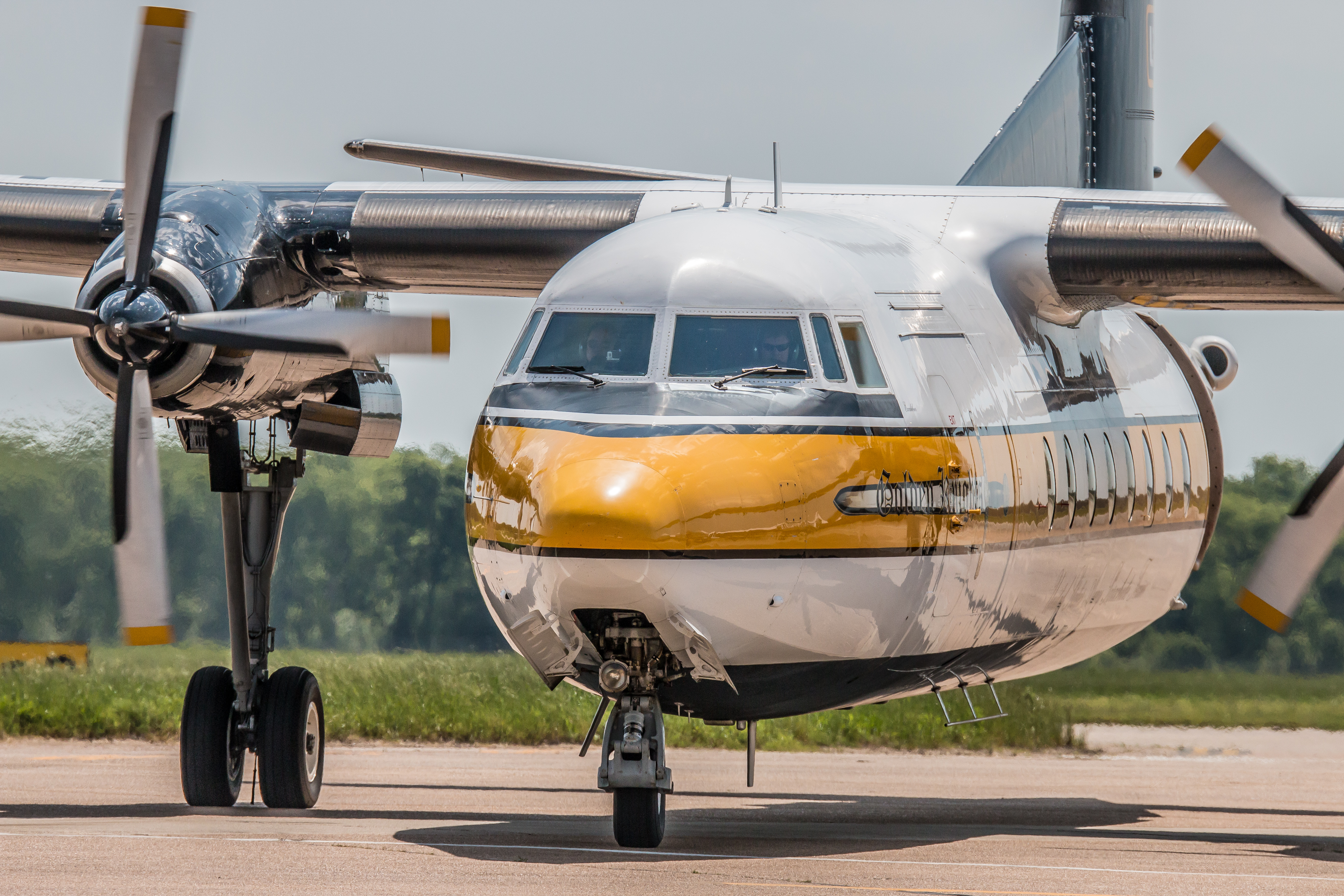 The Golden Knights use a Fokker F-27 as their jump ship. Photo: David Leadingham

Colonel Kristin Goodwin, Commander of the 2d Bomb wing presided over a ceremony swearing in new recruits to the US Air Force, Army, Navy and Marines while a B-52 did a slow salute pass behind them. Imagine that as your introduction to military service! 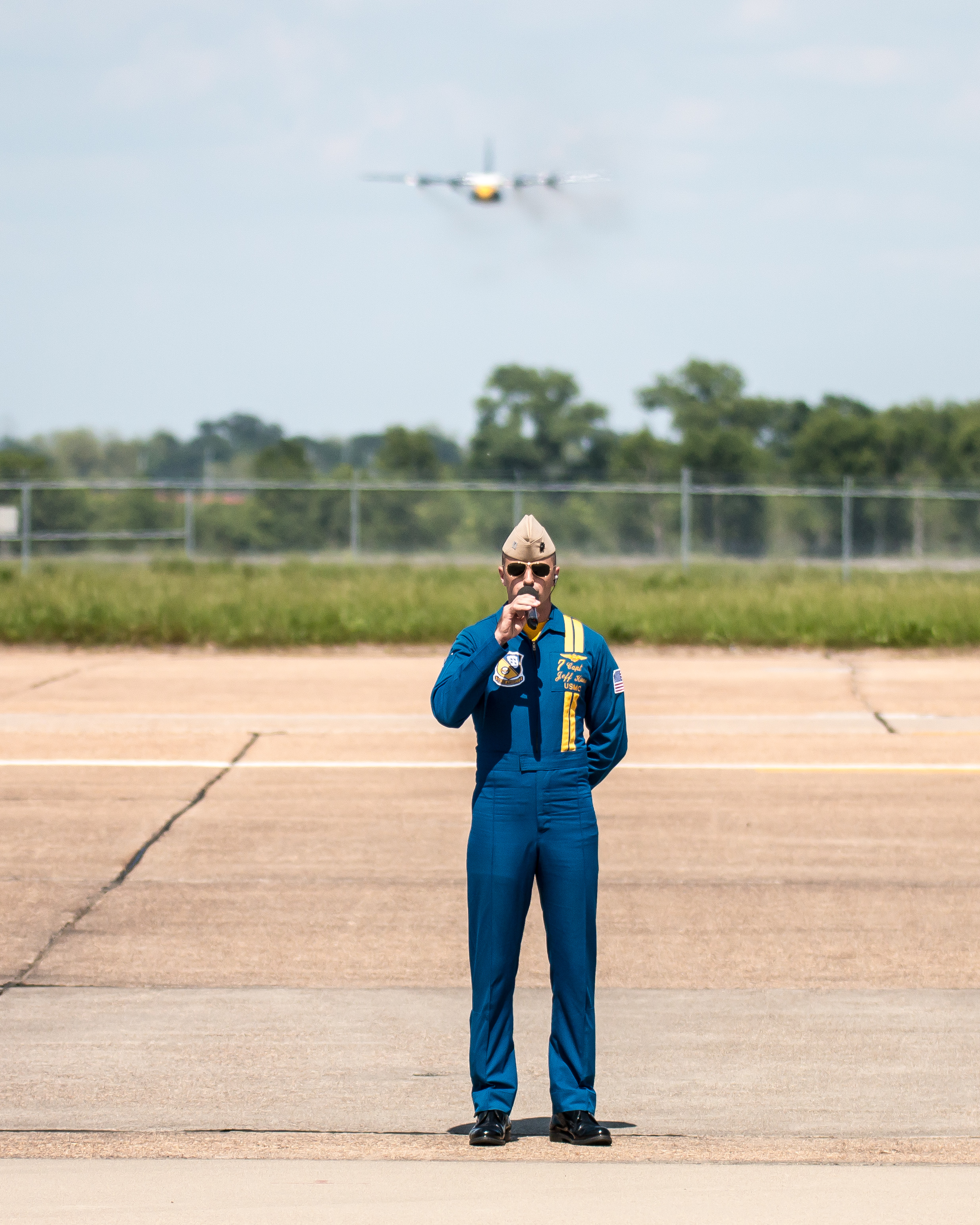 Of course the stars of the show were the Navy Blue Angels. They began the show with the Marine Corps C-130 Hercules affectionately known as “Fat Albert”. The crew demonstrated the tactical flight capabilities with a low-transition takeoff maximum-rate climb, a 45 degree nose-up attitude that always amazes the crowd. After a few photo passes it concludes with a maximum-effort braking demonstration, bringing the craft to a full stop in less than 1,000 feet. 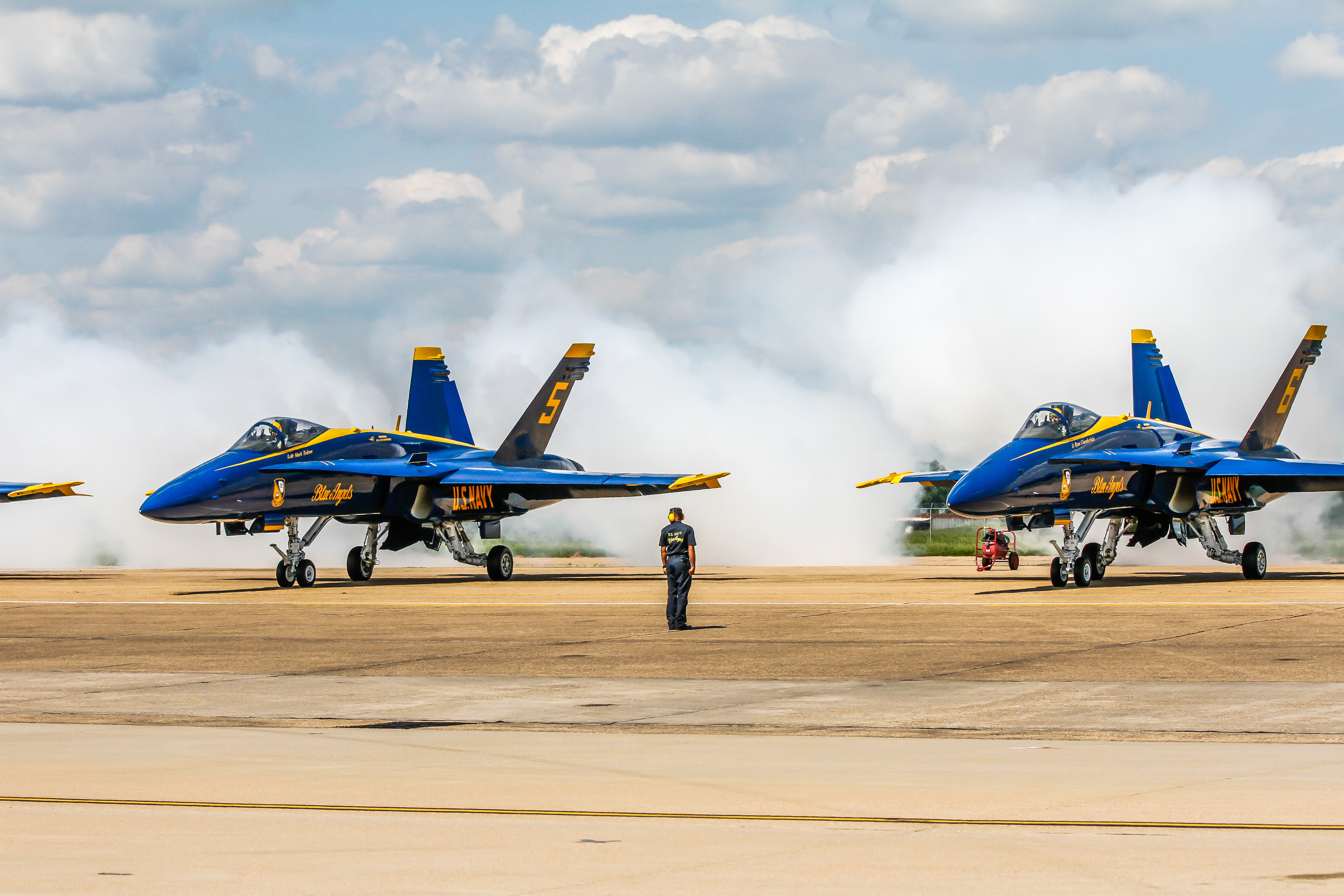 The Blue Angels have an elaborate start-up routine on the ground. David Leadingham

Everything about the Blue Angels demonstration is choreographed and as highly polished as the F/A-18 Hornets they fly. It starts with the precise moves of the narrator who moved along the length of the flight line during the demo, to the ground crew who go through the pre-flight routine in lock-step, to the flying which includes some formations where the canopy of one jet is only eighteen inches from the wingtip of another. 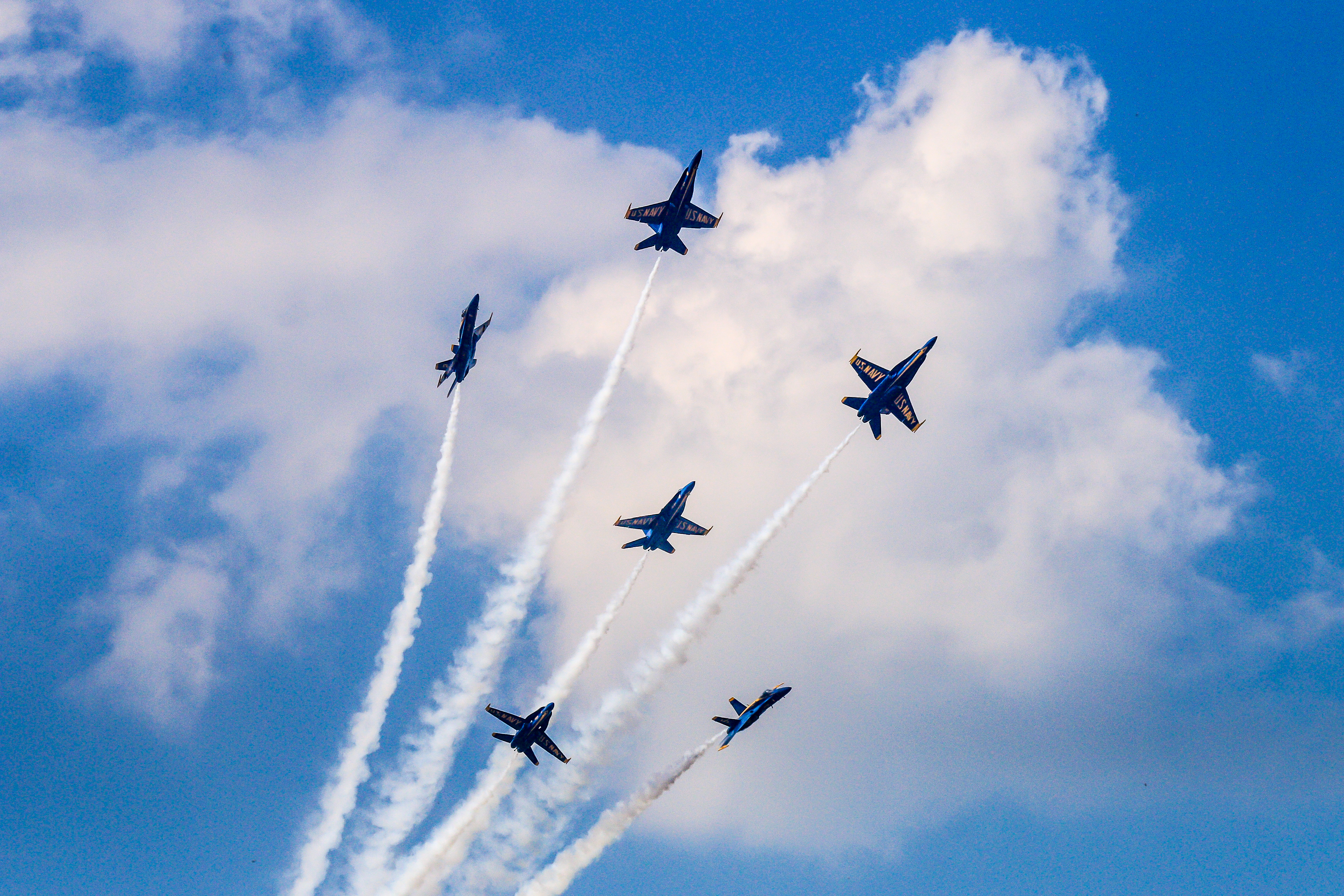 The first four jets took off together in a diamond formation, then 5 and 6 took off with a dirty roll into a vertical climb. And from there the show never slowed down. Each maneuver that followed – the opposing knife edge, diamond roll, opposing inverted to inverted roll, diamond dirty loop (they are the only team that performs it) and echelon parade, to name just a few – was performed, as the narrator said, “with maximum speed and minimum separation.” 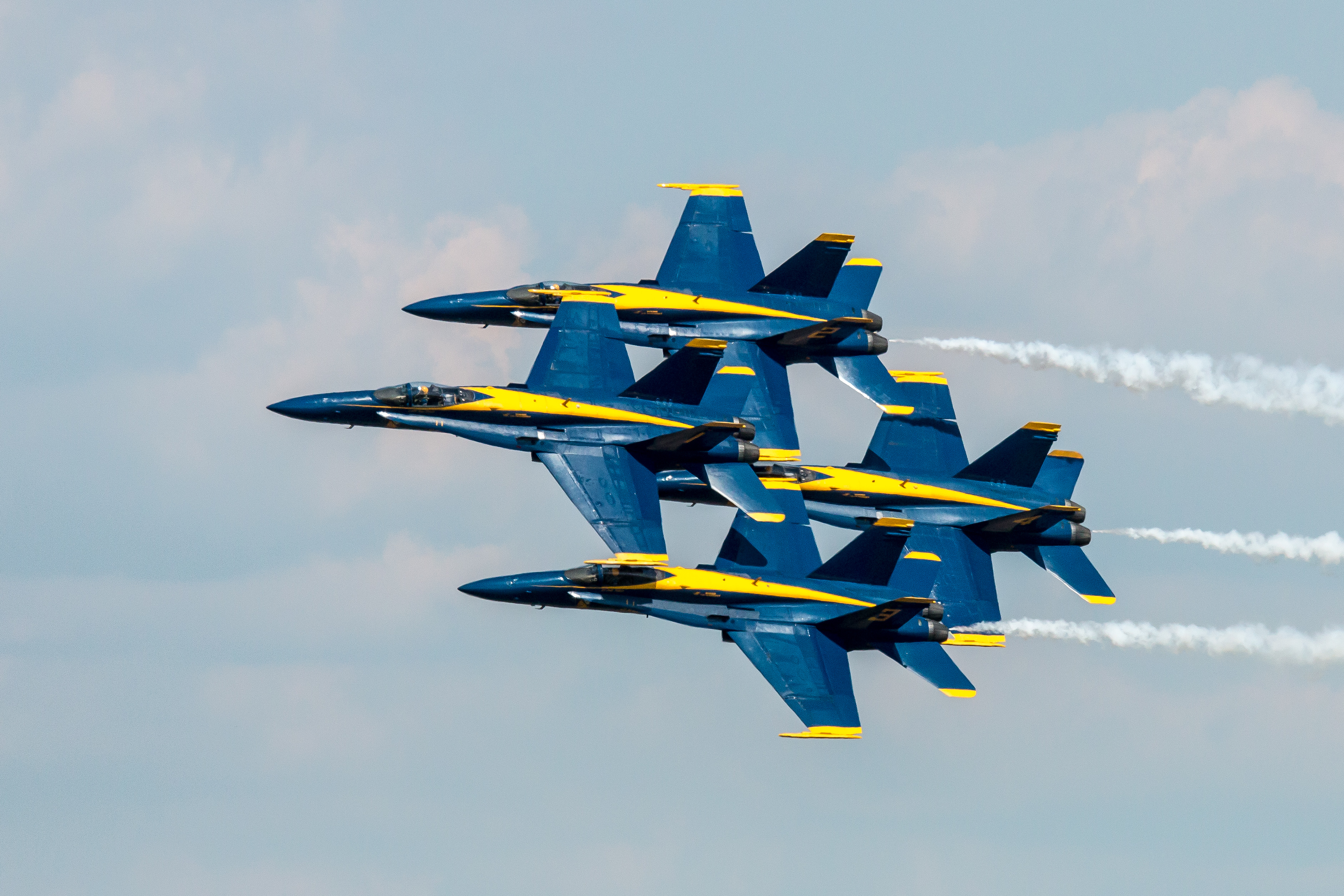 It is said that the Blue Angels fly closer together than any other aerobatic team. Photo: David Leadingham

This team packs so much into their show that it’s easy for them to slip in a sneak pass. They actually perform it with two jets, one coming from the left across the show line and the other coming from behind the crowd, just barely missing each other at show center. 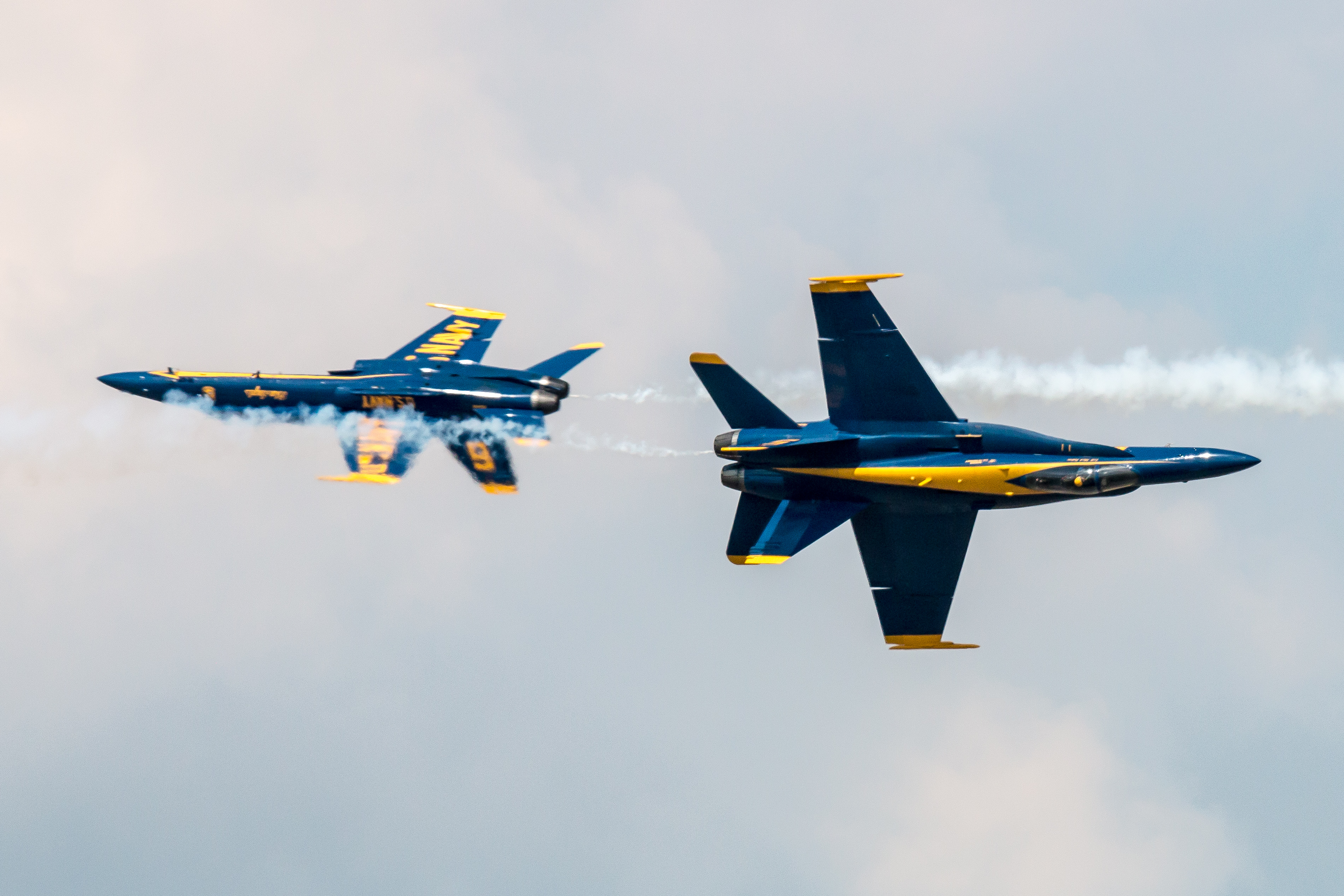 I’ve seen several military demo teams, but for me the precision and showmanship of the Blue Angels set the standard. 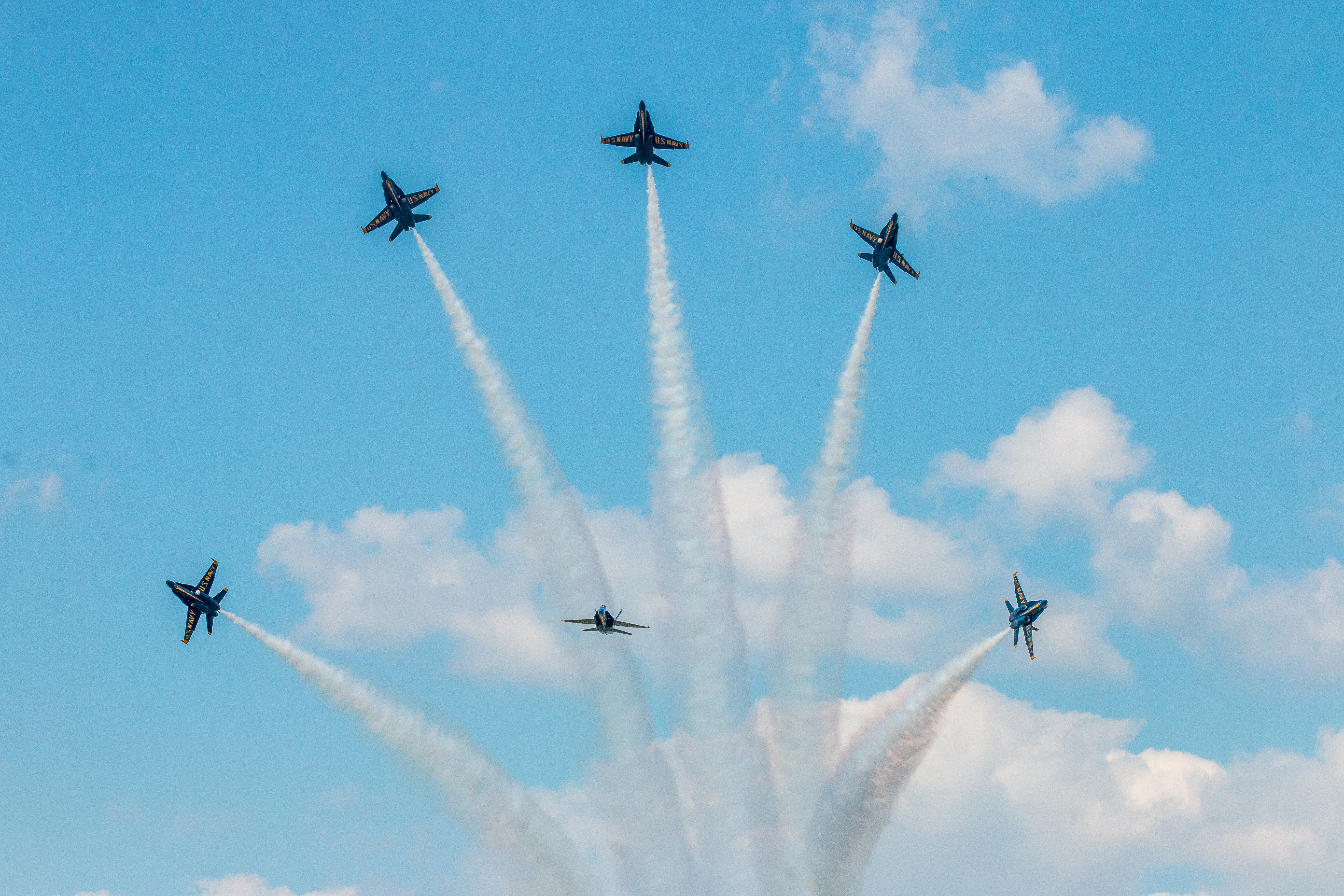 The Blue Angels are ambassadors for the U.S. Navy and the USA as a whole. Photo: David Leadingham

As the crowd began to exit I went back one more time to see the Guppy and give it a pat on the nose. I don’t know if I will ever get a chance to see it again and I just had to touch it one more time.