Australian International Air Show starts on Tuesday with the trade days where many aviation businesses show there equipment. Australia was lucky to see the new Airbus A400M Atlas trying and sell to other countries’ air forces, maybe as a quick replacement for the C-130J for the RAAF. The A400 left on Thursday going back home – all the way here and no display! 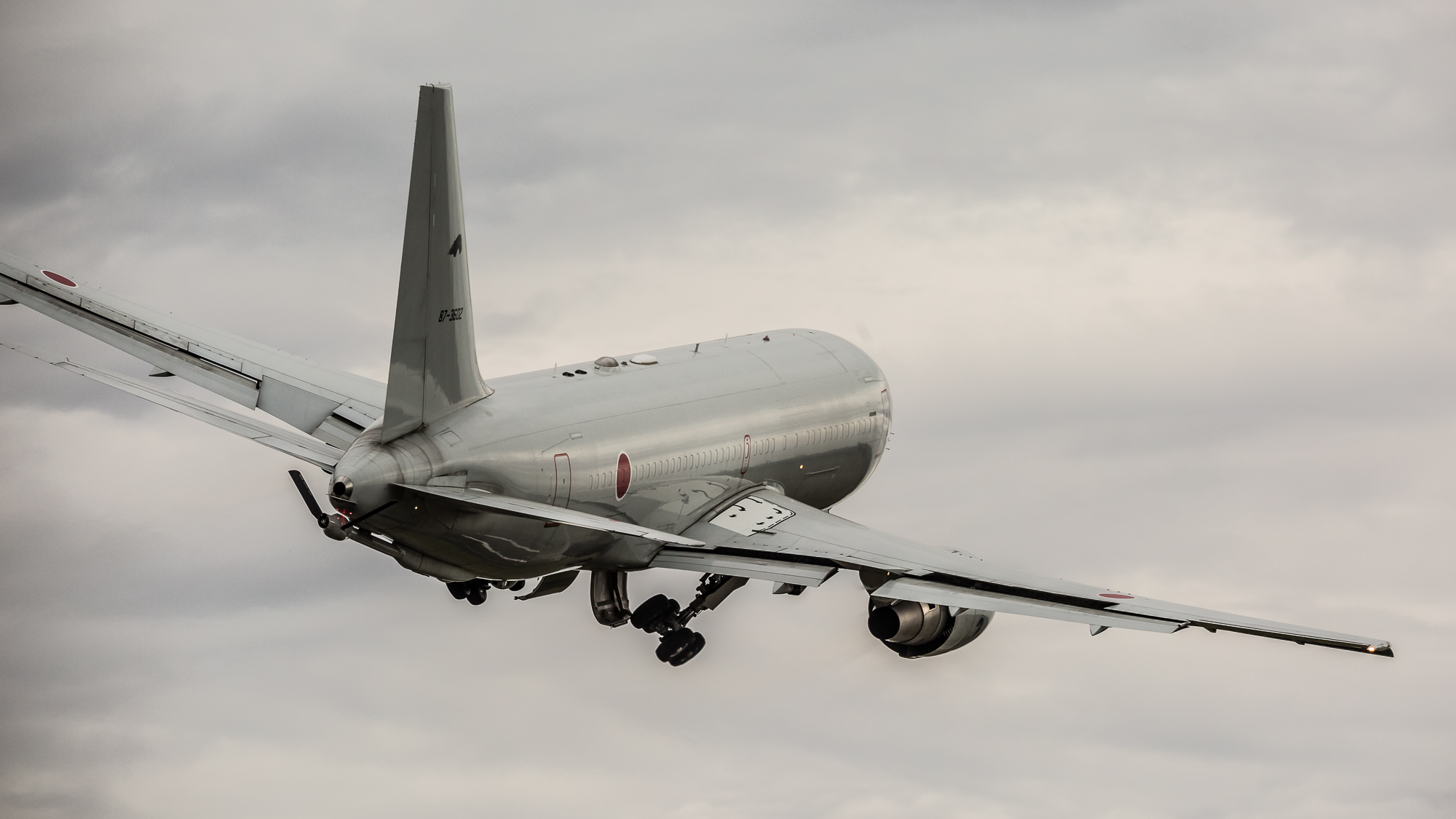 There were several interesting aircraft on static, including this Japanese KC-767. Photo: William Reid

This year the theme for the airshow was Heroes of the Sky 1915-2015, marking the century of the Australia New Zealand Army Corp (ANZAC). The public display starts on Friday afternoon with ‘Friday Night Alight” and goes though to a great fireworks display and night show. It is currently the only airshow in the southern hemisphere that includes a night display. 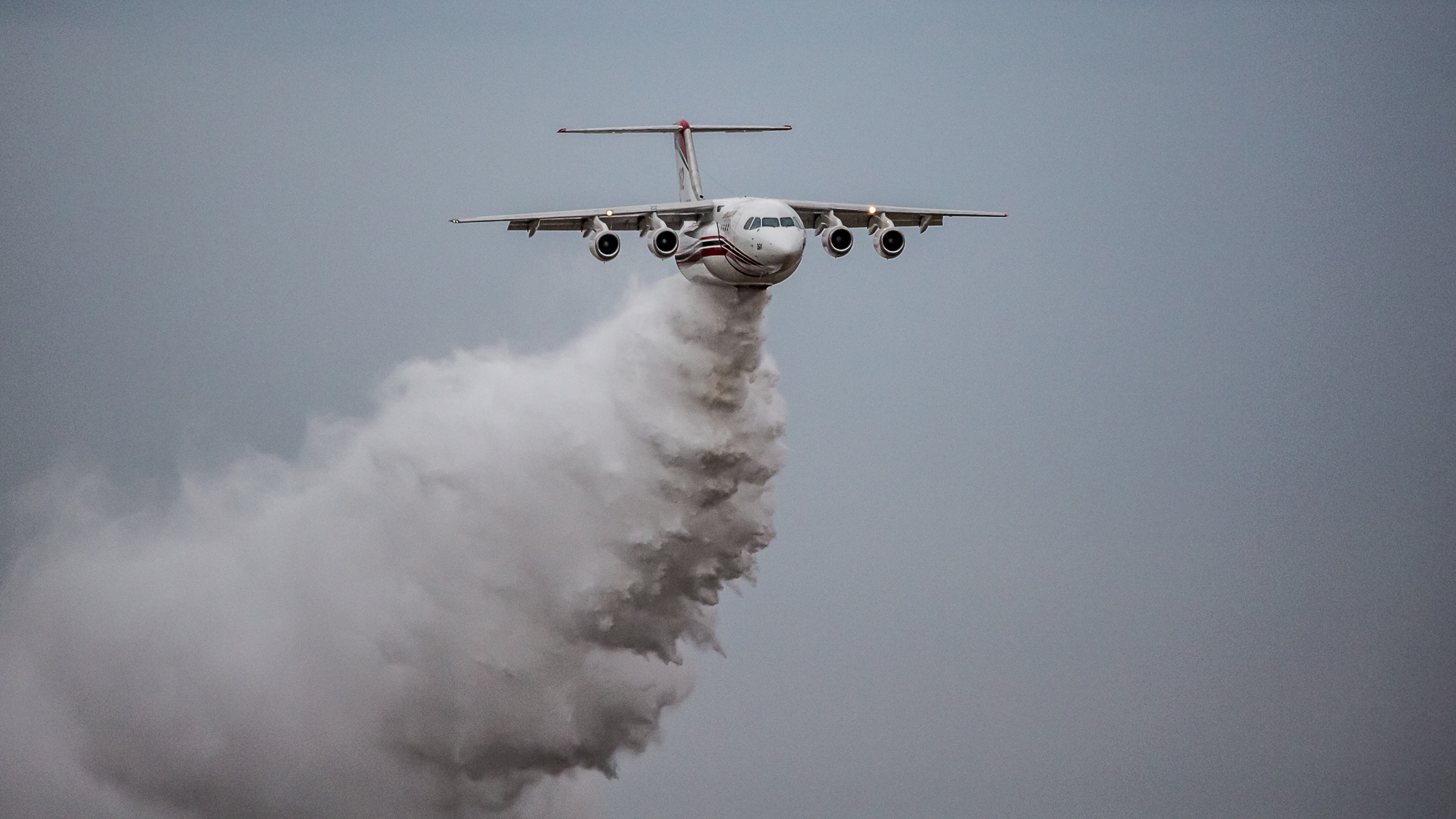 A water drop from a converted airliner is a very rare sight indeed! Photo: William Reid

The evening display included several civilian acts operating with pyrotechnics, such as the Salto Jet Glider and “Otto the Helicopter.” Other civilian acts at the show included the Global Stars flying two UK-based Extra 300s and a trio of American aerobatic pilots forming The Immortals. 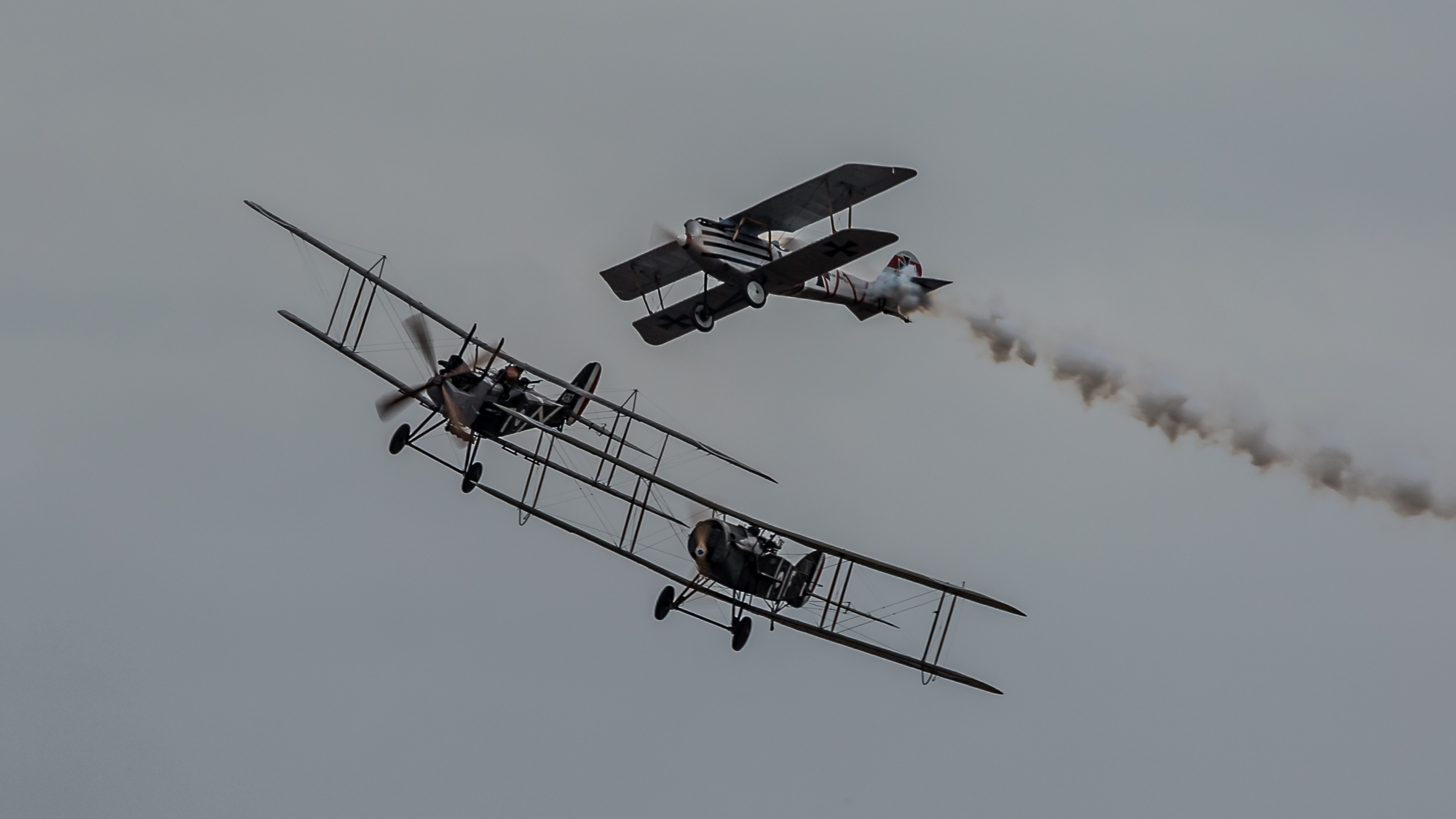 Many rare WWI types were on show, including German and British biplanes. Photo: William Reid

This year all generations were in a very great treat with replica WWI aircraft from Australia and New Zealand which did a awesome scouting and air war in front of the crowd. We also have some of the crowd favourites like the RAAF Roulettes (x6 PC-9), F/A-18A Hornet solo display (complete with flares!) and the Pacific Air Force F-16C from the 35th Fighter Wing 13th Fighter Squadron based in Japan, which amazed the crowd, with its high speed run, high G-turns and low speed into afterburner passes. 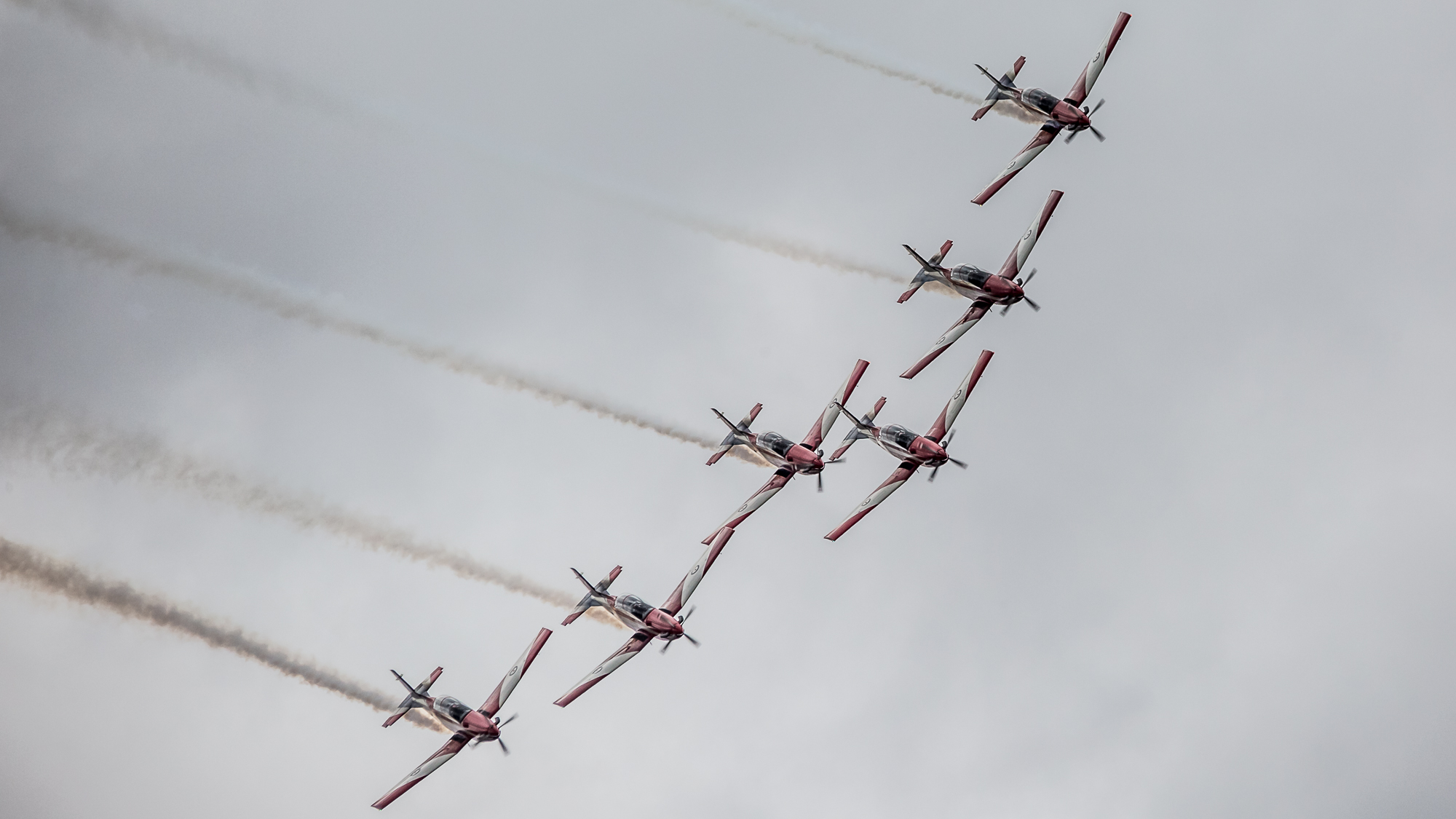 The Roulettes fly the PC-9, like several other aerobatic teams. Photo: William Reid

What can we say about this pilot, everyone had his eyes on him as he flies passed, kids with their eyes to him wishing they could do that! 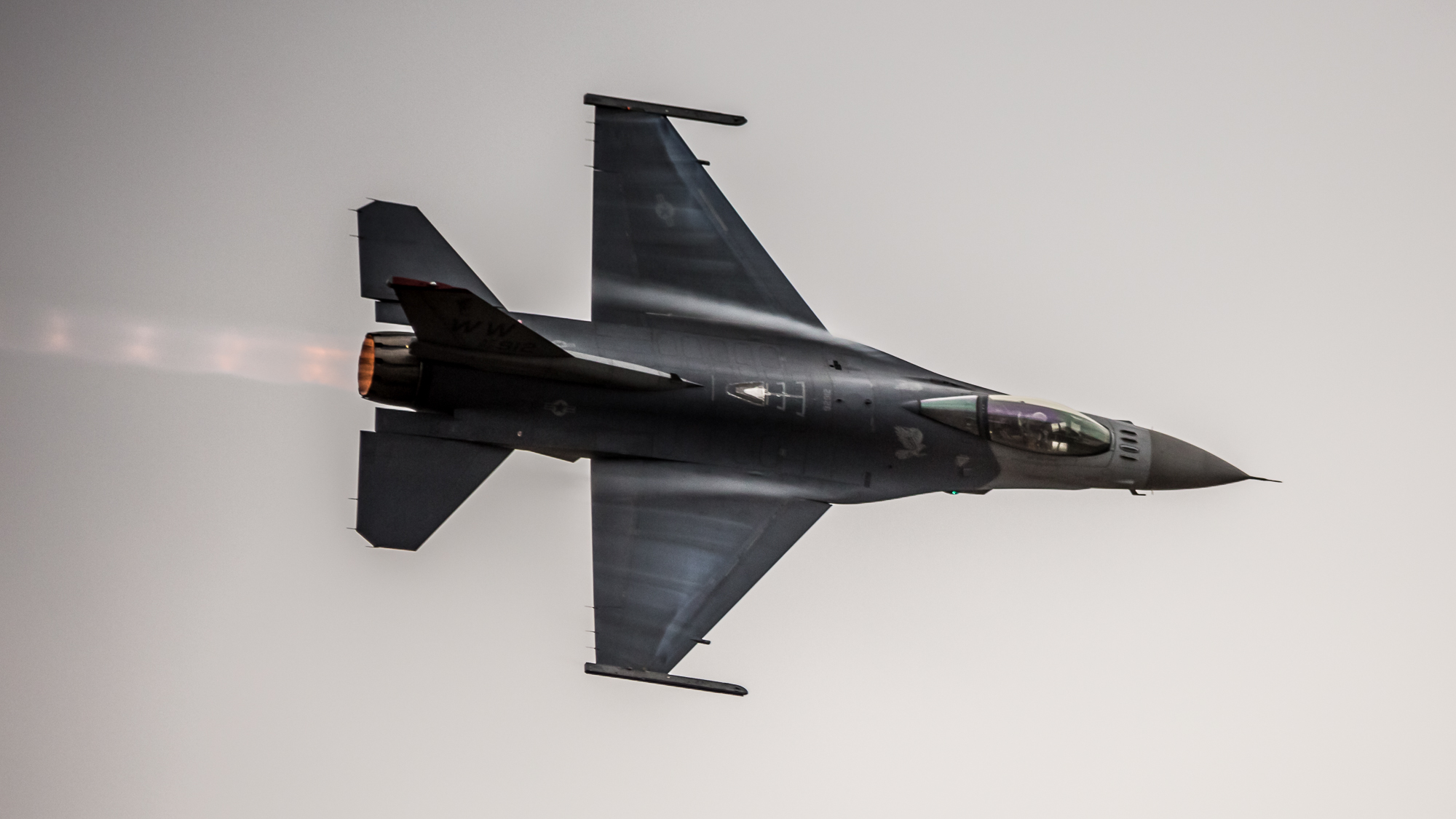 There were a couple of new attractions to the Airshow; one was a display from the RSAF Black Knights, who performed a great two-ship routine comprising of a selection of formation and opposition manoeuvres. Avalon was one of only two international shows the team are due to fly at this year. 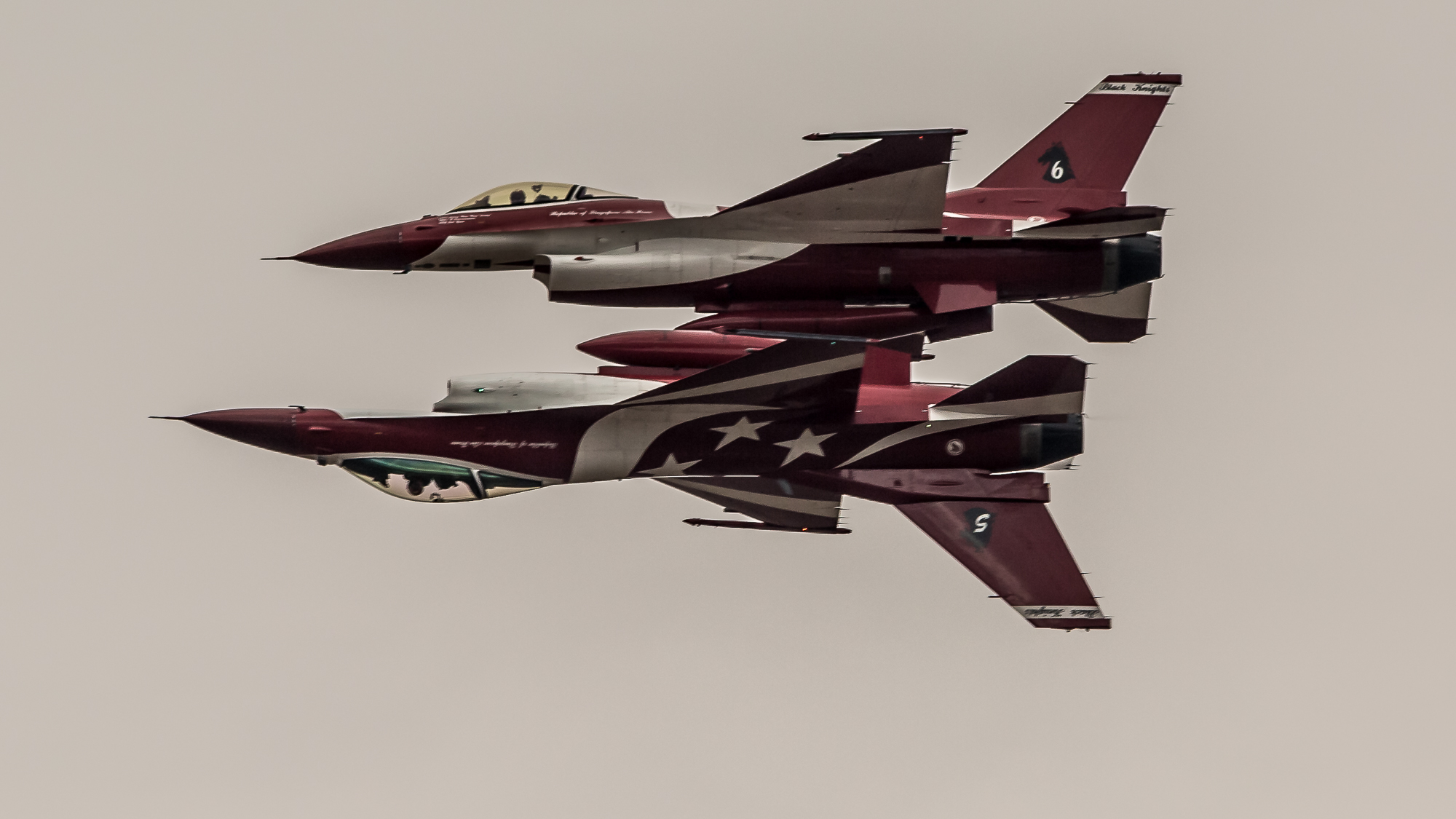 The Black Knights are scheduled to be stood down in August 2015. Photo: William Reid

The Australian Defence Force (ADF) also performed an airfield attack with the ARH Tigers and the MRH90 Taipan. 2015 was the first time they flew during the Avalon airshow. 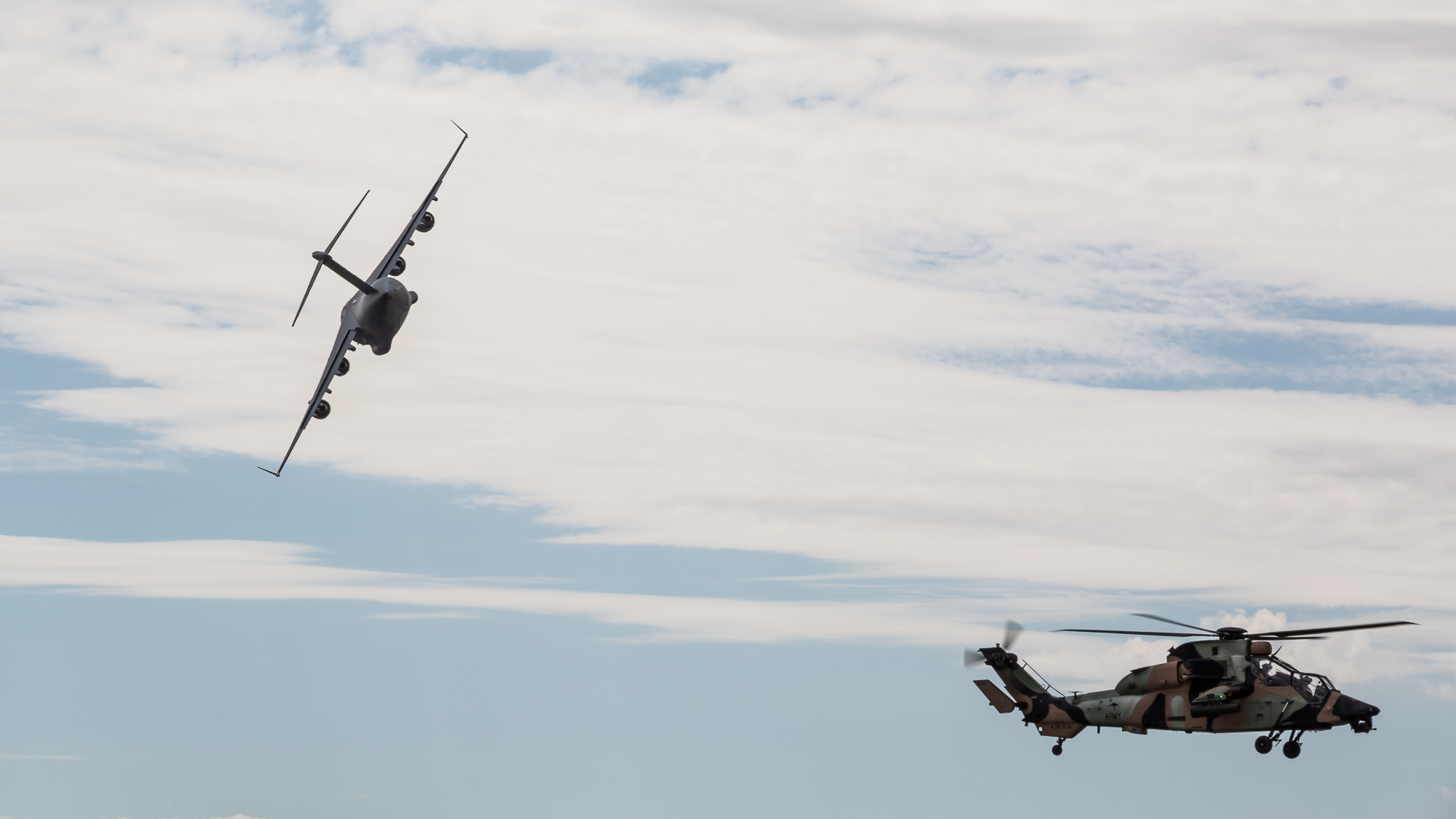 The ADF contributed more to Avalon 2015 than to any Avalon Airshow in history. Photo: William Reid

Also in the attack was an ACM with F/A-18F, paradrop of army troops from three C-130J, a C-17 landing two Bushmaster assault vehicles, the E-7, KC-30 and AP-3C, the KC-30 refuelling the Hornets and the AP-3C bombing a submarine. 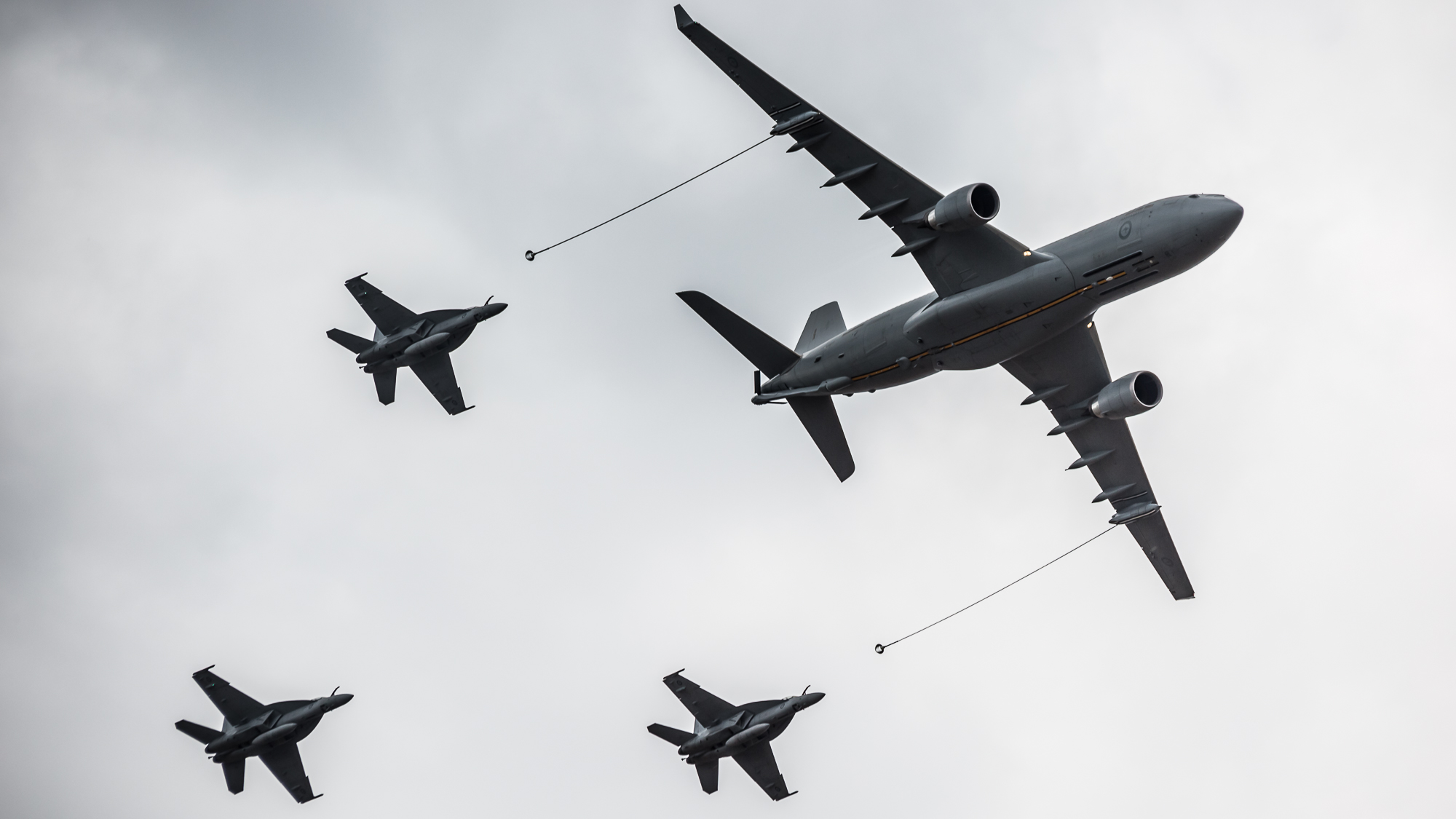 Another highlight was a flypast of 3 generations of fighters in RAAF service Sabre, Meteor and Hornet. Sadly it was the Sabre’s final flight for some time as Martin Baker has stopped supplying parts for the ejection seat. 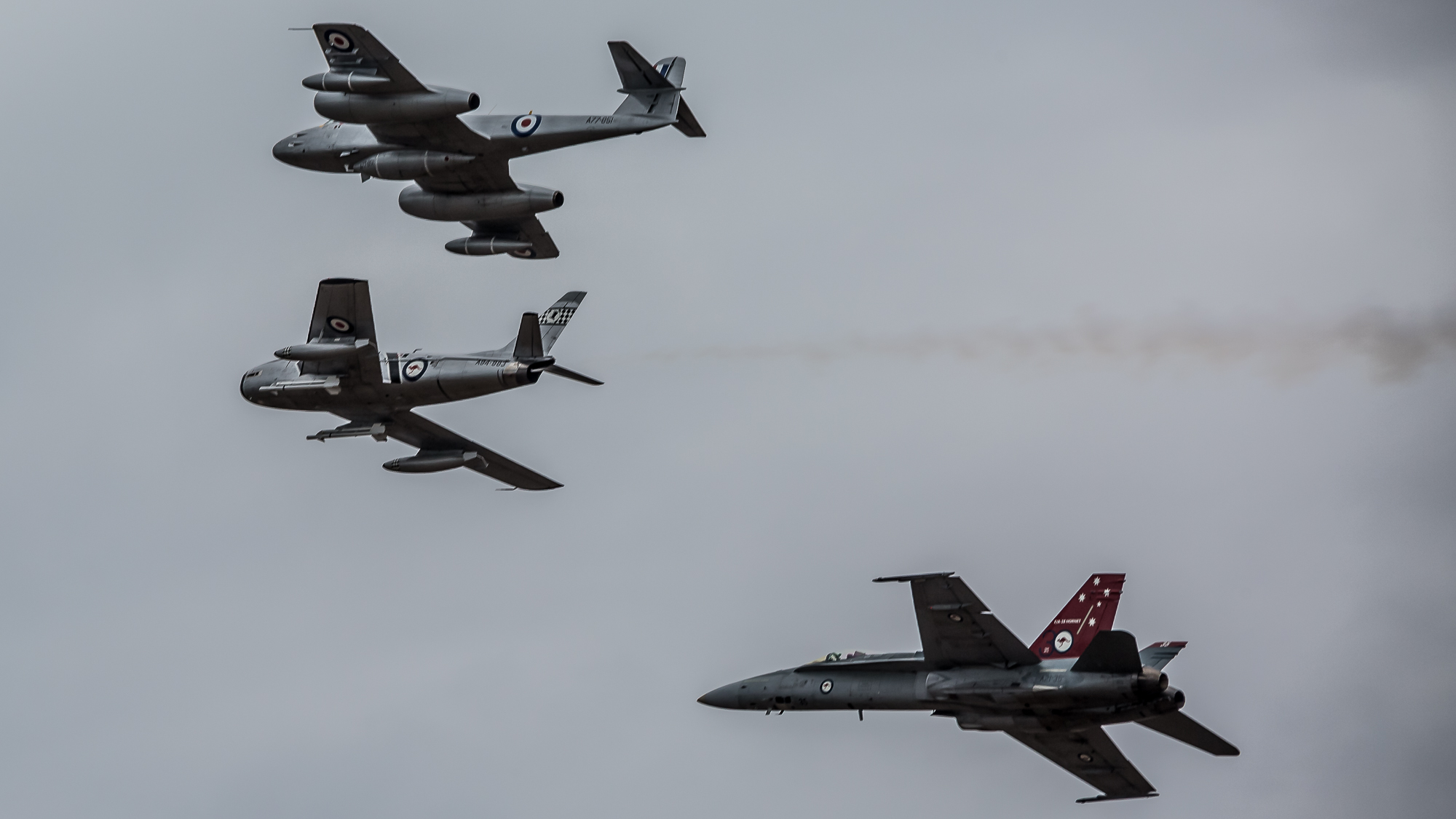 Several other old aircraft were also on display, including the P-8 Neptune, Hudson, Catalina, Dakota, Caribou and several fighters from WWII. The fighters joined up for a mixed flypast which included the P-40, P-51 and Spitfire. 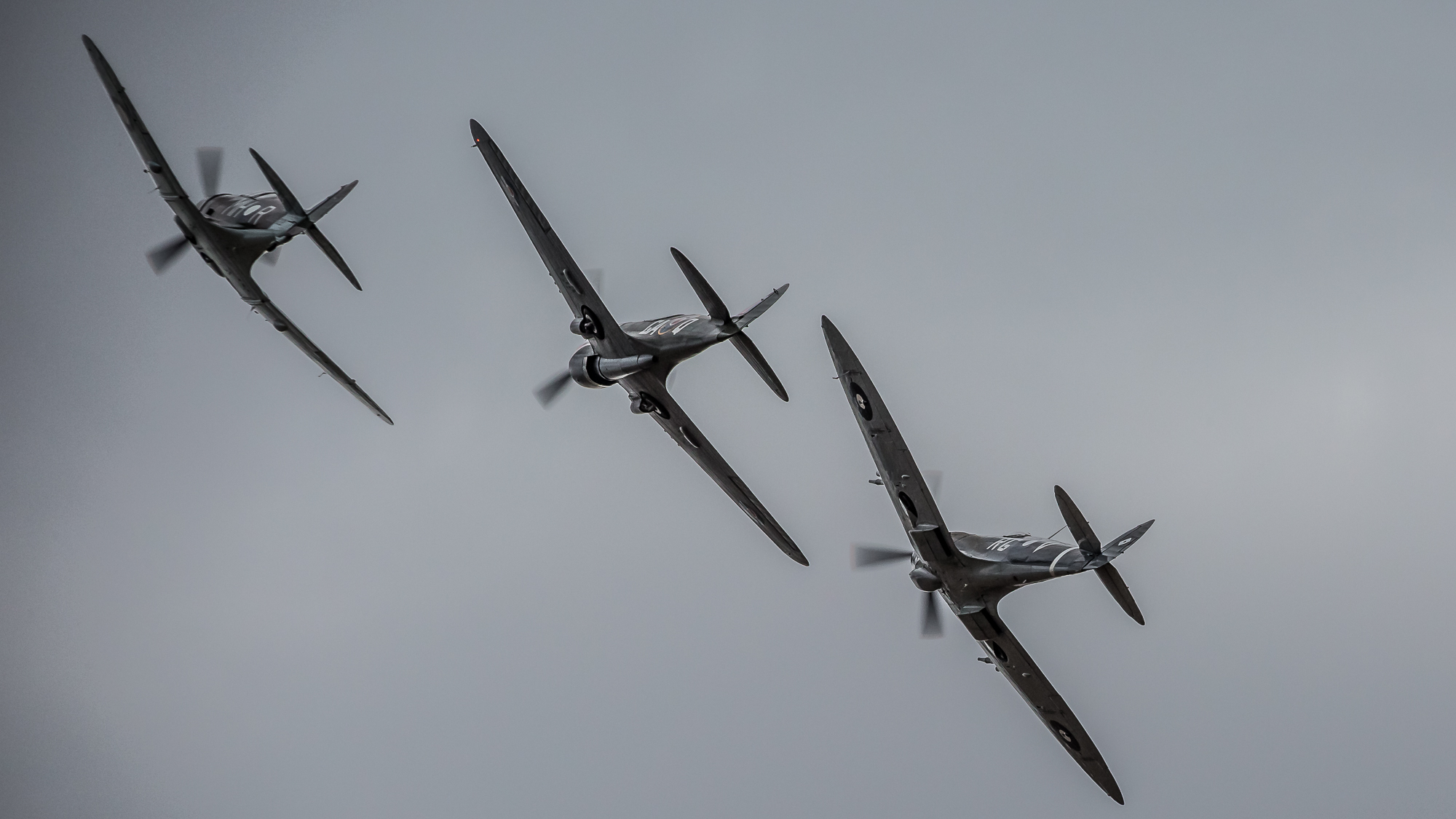 There was a large contingent of WWII-era aircraft. Photo: William Reid

Controversially the USAF F-22 appeared only on static. While it was meant to do a display the display pilot was assigned other duties over the show week, a cause of much upset on the Australian International Airshow’s Facebook page! 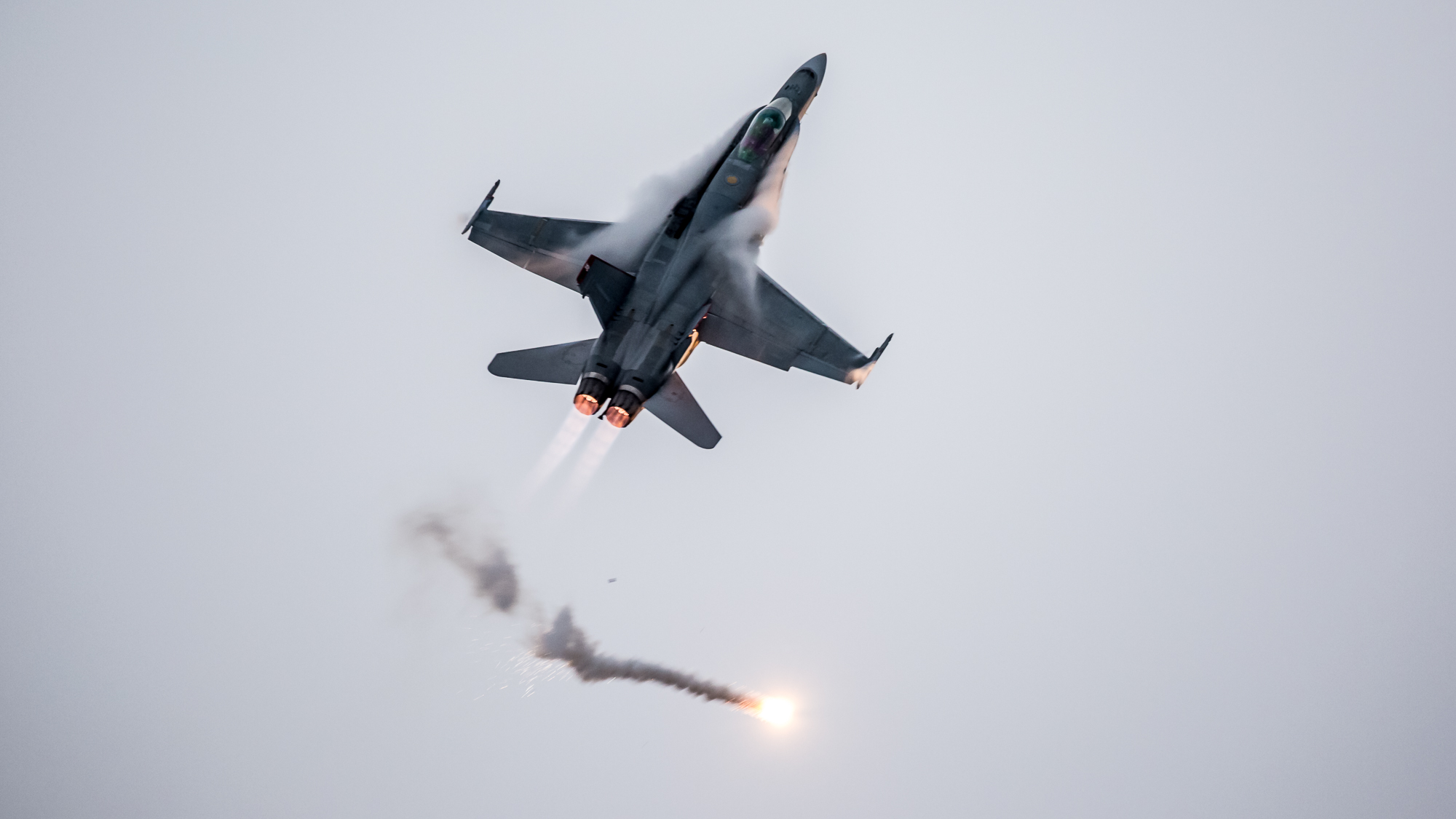 The RAAF solo F/A-18 display is easily one of the best Hornet demonstrations in the world. Photo: William Reid

For people from overseas, this is definitely an airshow you should come and see; it is held every two years with the next one in early 2017. I would like to thank Airshow Down Under, the ADF, USAF, RSAF and all the Civilian displays and everyone who volunteer and be part of the airshow: thank you for another great year! 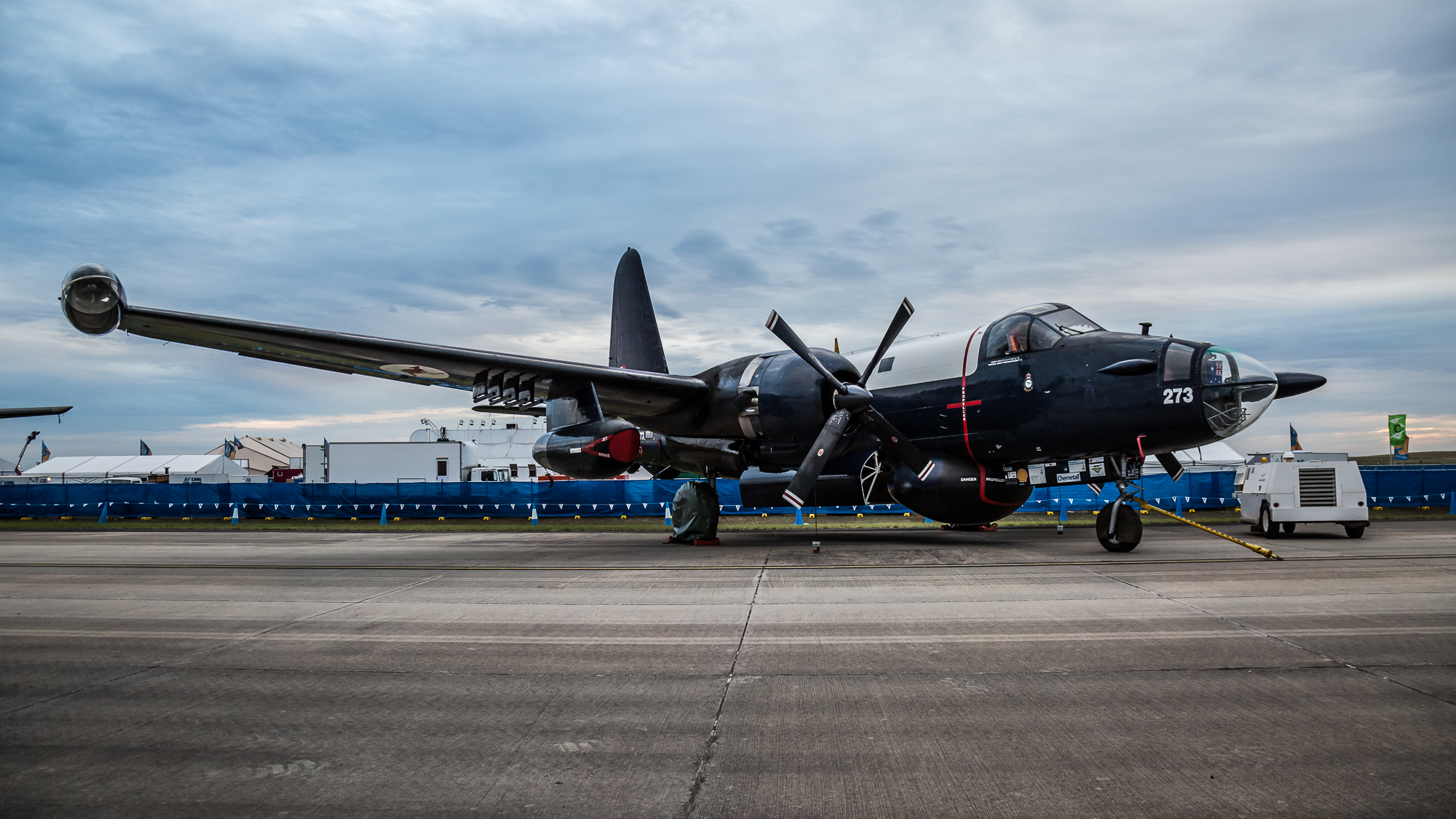 Australia is home to some extremely rare ex-military ‘heavies’ such as this Neptune. Photo: William Reid

William Reid is a professional photographer based in Victoria, Australia. He owns Divine Aviation and William Reid Photography.