The month of July is packed with a veritable feast of European airshows, and enthusiasts would be forgiven for thinking shows such as RIAT are “where it’s at”. But in fact, the third weekend of July saw the second edition of the Wings over Baltics airshow in Latvia, an event seeking to build upon a hugely successful and well-attended inaugural event the previous year. Held at Tukums Airport, just an hour outside of Riga, and organised by the Baltic Bees Jet Team, this event is something of a gem – and only continues to grow! 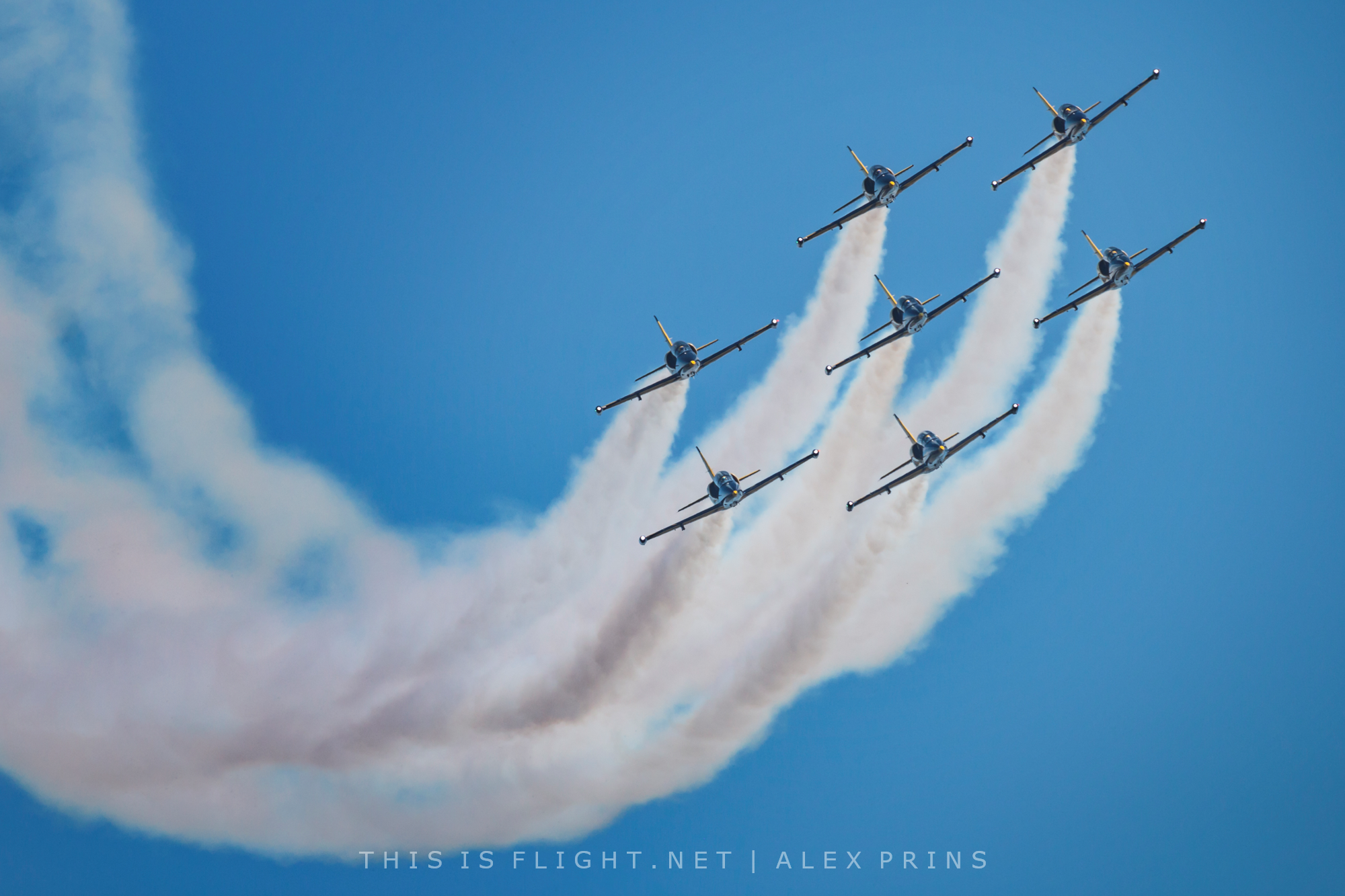 While the final display schedule was perhaps a little pared down in comparison with the promotional material published over the preceding months, the show saw strong military participation from Hungary, Poland, the US and NATO partners. Despite the notable loss of civilian displays such as Artur Kielak and AeroSparx (the latter thwarted by the UK’s Civil Aviation Authority), there was strength in what remained, with stalwarts such as Jurgis Kairys and the Bees impressing consistently. As it was, the organisers can be pleased with an increasingly impressive host of participants, and a healthy crowd of over 16,000 across the weekend, as this event goes from strength to strength. 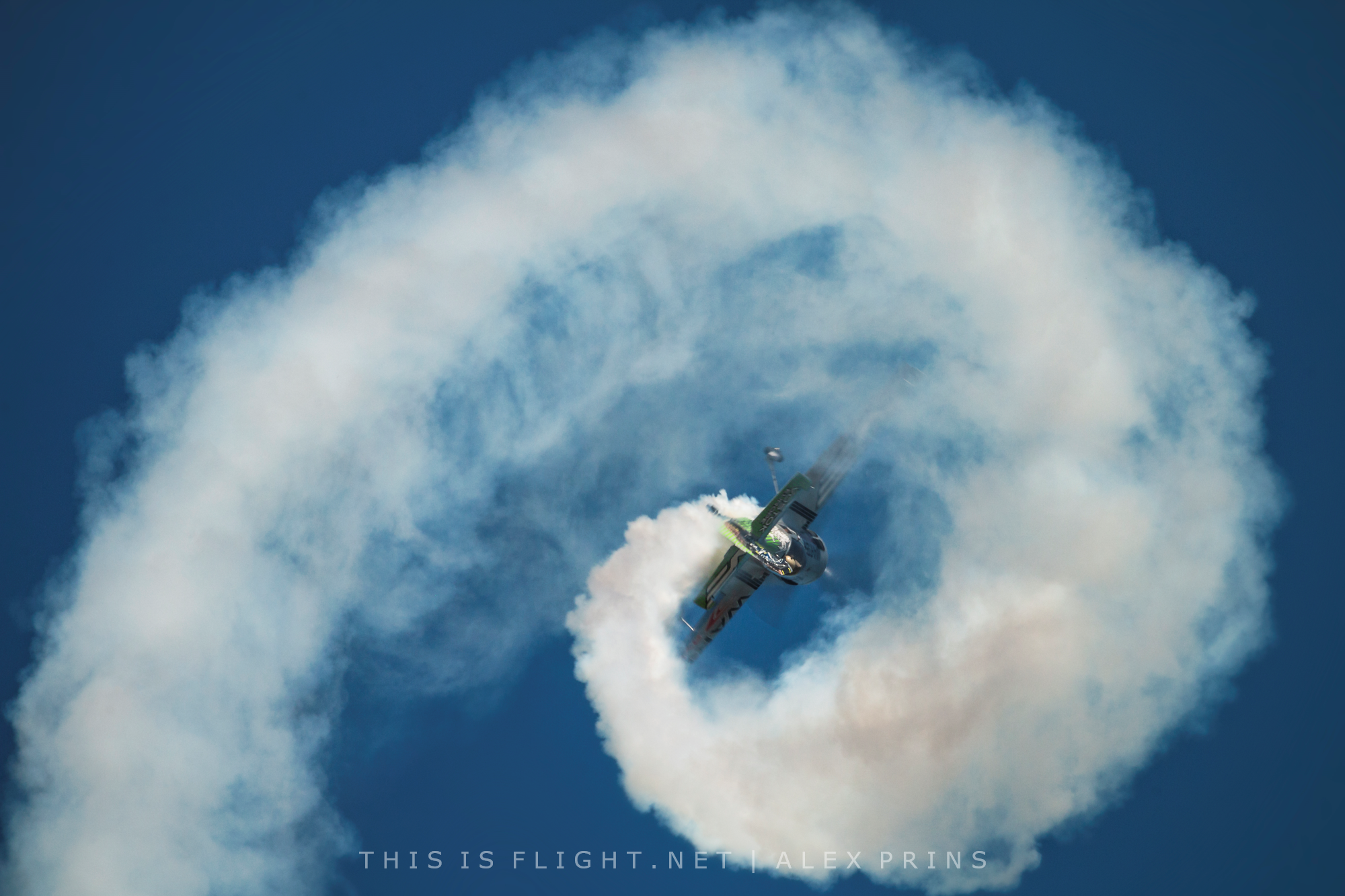 On both days, the event began at 11am with speeches by various significant figures in the community, while an Antonov An-2R climbed to altitude with its cargo of parachutists. Once those jumpers had landed, the huge Soviet biplane performed an energetic solo display that would have been impressive of an aircraft half the size! Low flypasts into steep climbs and wingovers opened the flying display with a vigour that the succeeding displays would be hard-pressed to match. 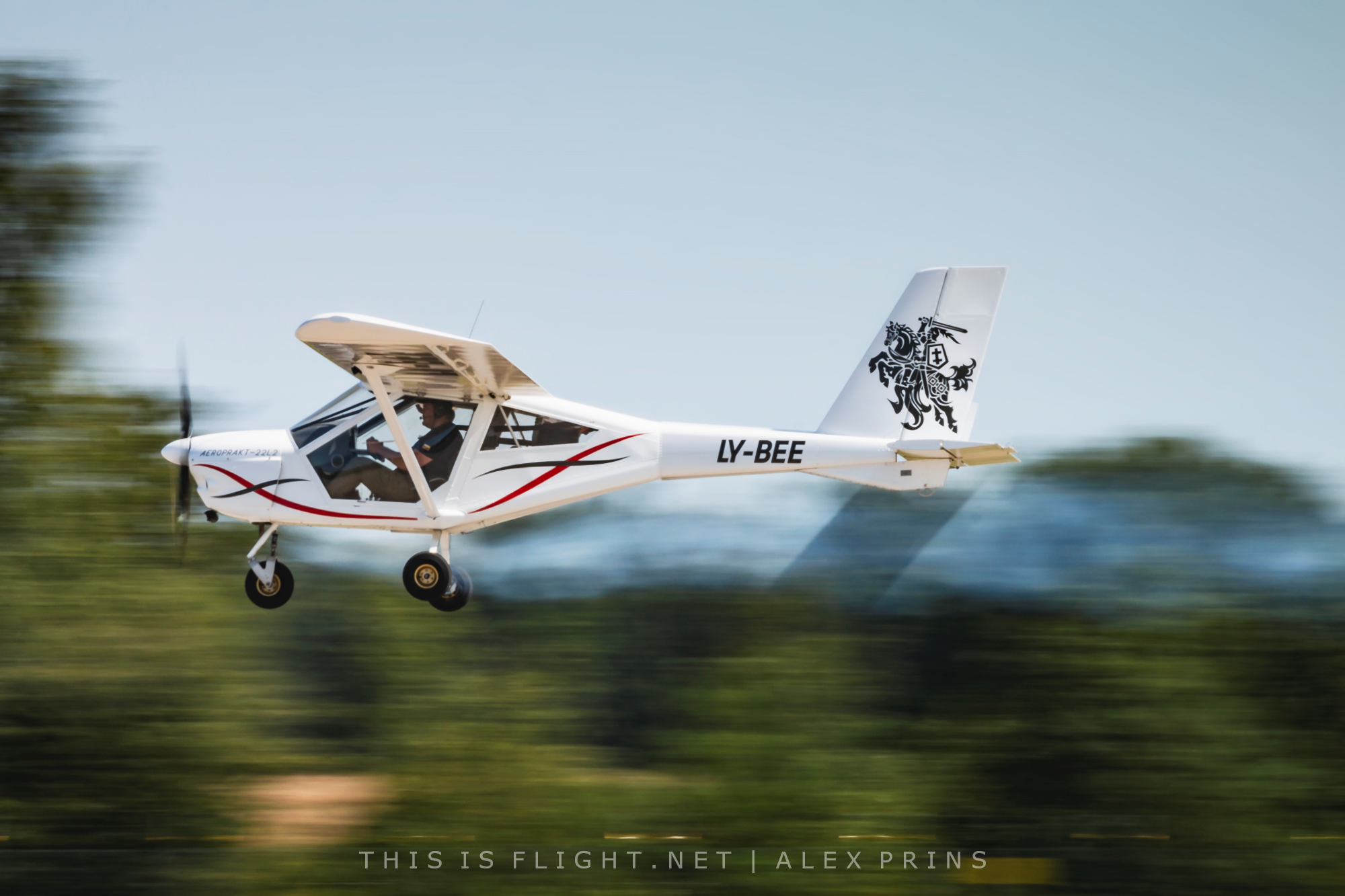 And so was the case, as unfortunately the Europe Calidus gyrocopter and Team Aeroprakt failed to garner much attention. Perhaps this was a shrewd move by the organisers, as indeed the crowd only really reached full capacity an hour into the flying display, when things got a little “meatier”. Both displays were given seven-minute slots, and unfortunately this felt much longer – perhaps twice as long as necessary. 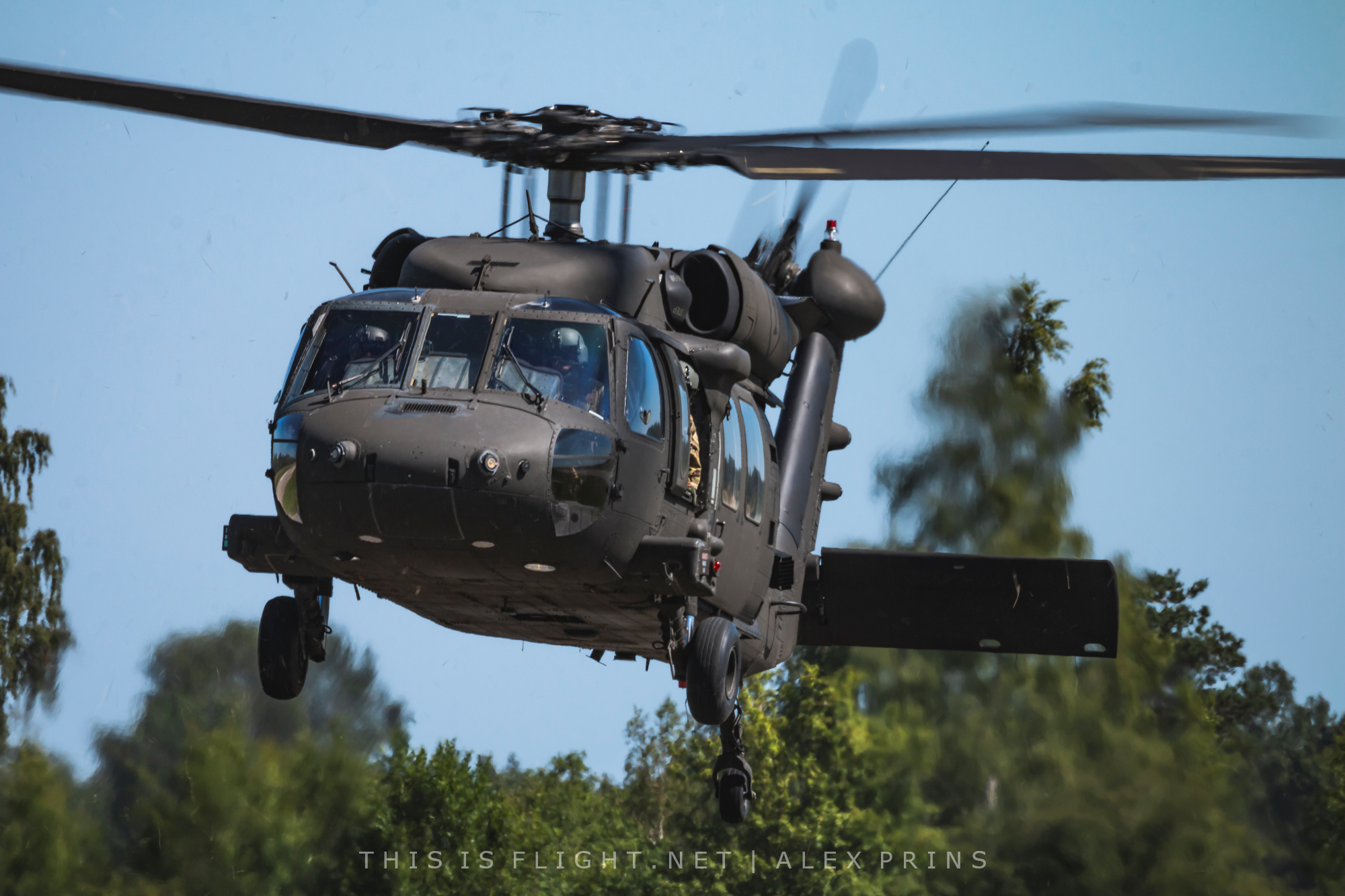 Following Aeroprakt on the Saturday was a rare flying display by a US Army UH-60 Blackhawk. However, this too proved to be an anti-climax, as while one would expect a helicopter to be highly agile and able to remain within the airfield confines, the crew took their aircraft far out of sight following each flypast. As advertisements for tactical flying and manoeuvrability go, it was disappointing to conclude that the relatively modern and upgraded machine was trumped by the earlier Antonov – a primitive aircraft design almost twice as old! 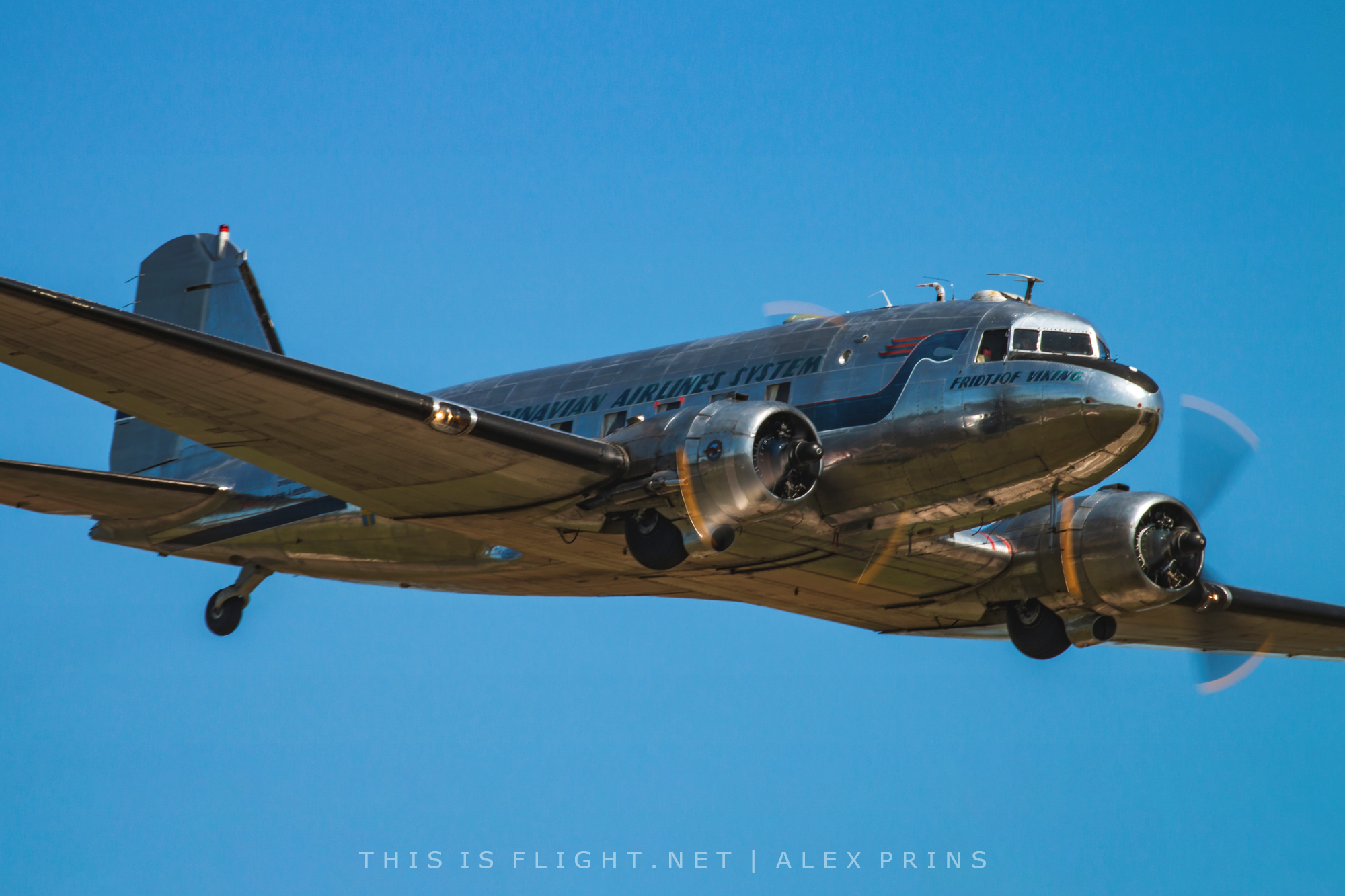 Rounding out the first hour of flying on both days was the first of a host of national debuts; in this case the first display in Latvia by a DC-3 Dakota. Owned by ‘Flying Veterans Sweden’ and flown in a civilian configuration, this Dakota is in fact a D-Day veteran and as such has spent a busy summer participating in international celebrations. At a show keen to celebrate the presence of NATO in the region, an international reminder of earlier Allied success was more than appropriate. This impressive debut was further improved on Sunday, as a second Scandinavian DC-3 made a fleeting appearance in formation. 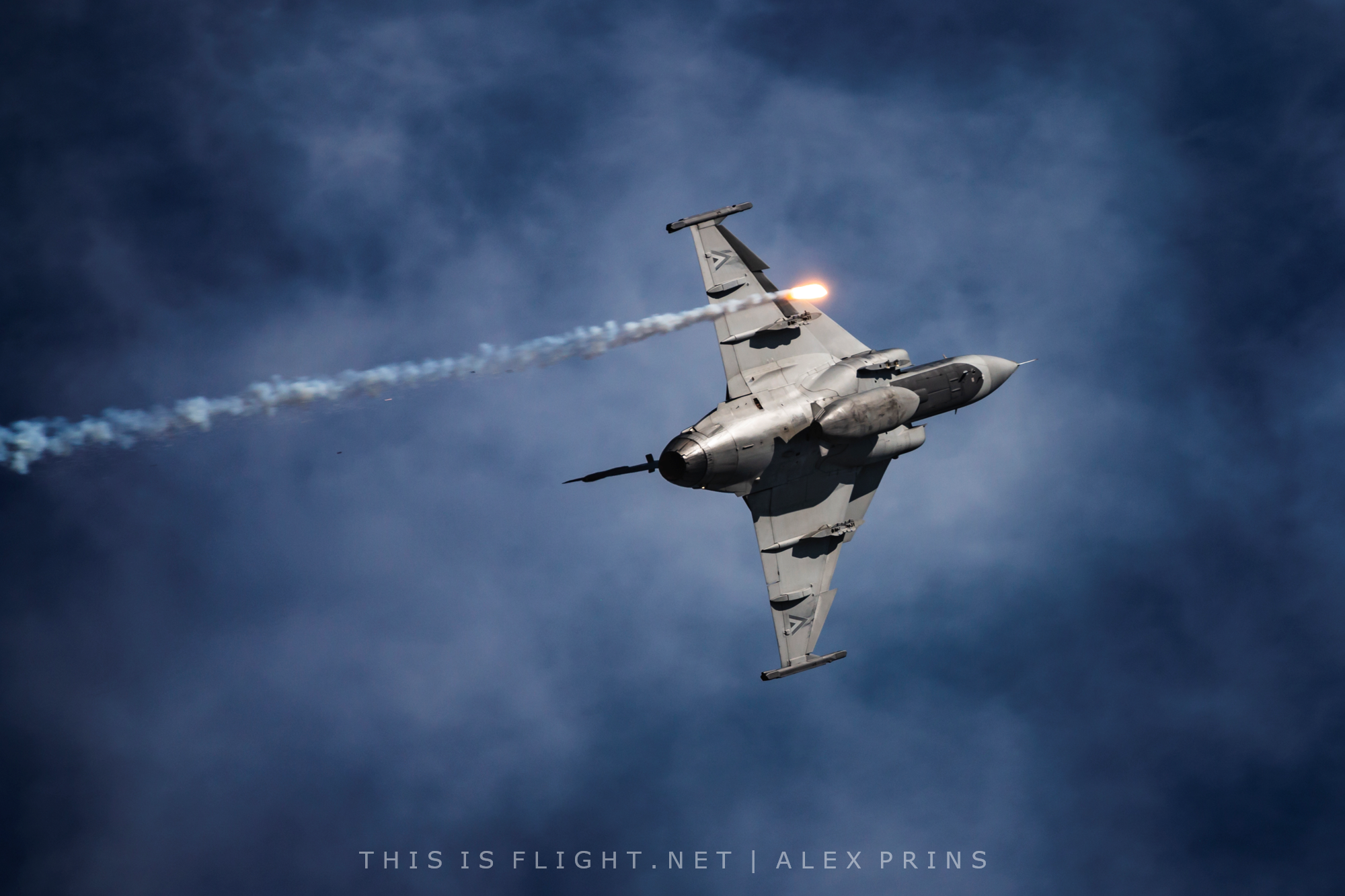 Another national first followed, as the Hungarian Air Force contributed an impressive solo fast jet display. What was publicised as a pairs display of JAS-39C Gripens unfortunately failed to materialise, however this did not detract from a strong solo performance, complimented by the copious use of flares and the rare flash of a fiery fuel dump. While perhaps a little more distant in parts than the later jet displays, the full Hungarian Gripen display is rarely seen away from home and is testament to the reputation that Wings over Baltics continues to cultivate. 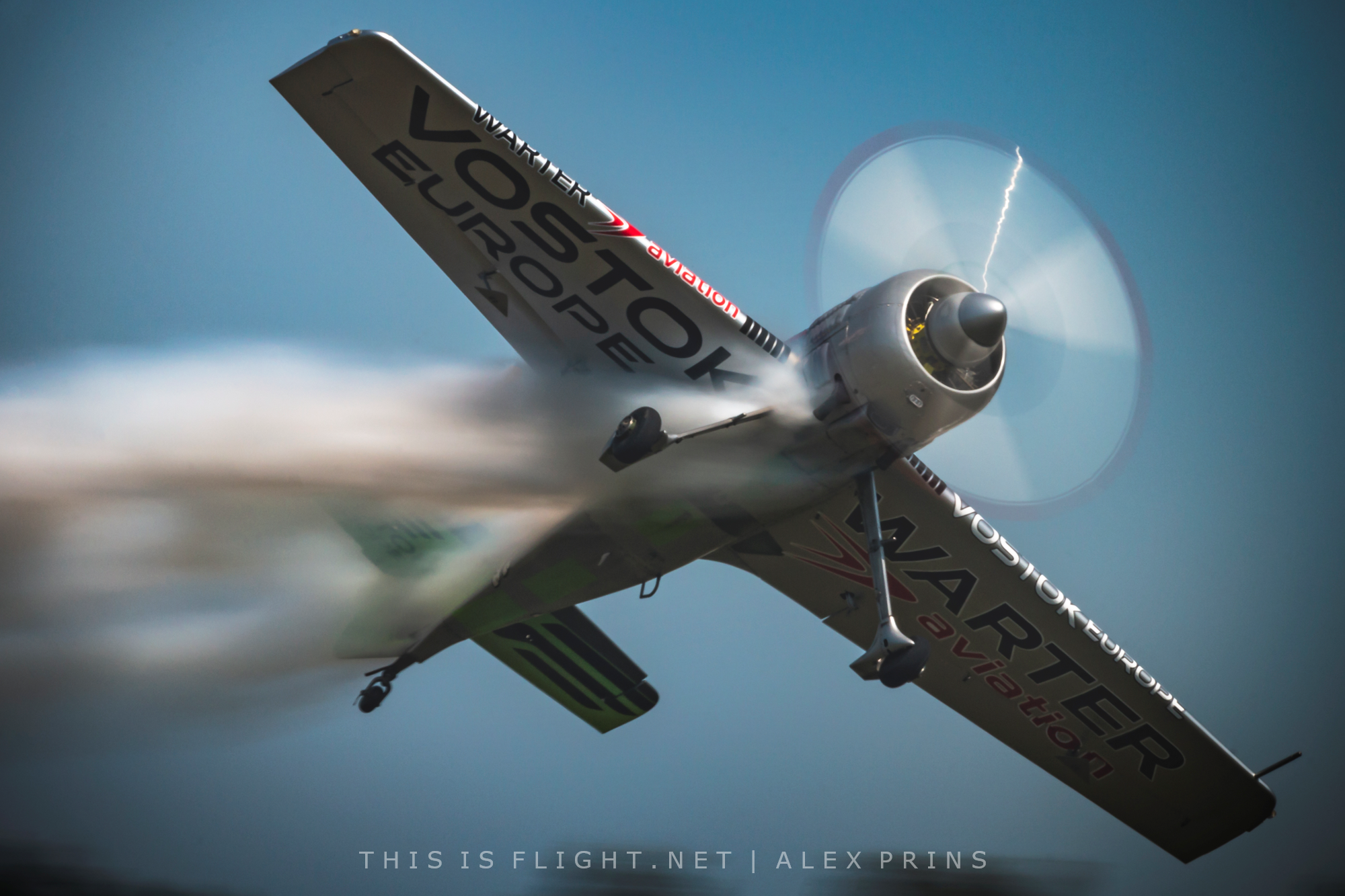 On both days, the two thunderous fast jet solo display in the schedule were followed by Jurgis Kairys in his uniquely modified Su-31; though an unenvious challenge, Jurgis picked up the gauntlet and provided a jaw dropping display of high-energy aerobatics and low-level displays of flying ability. As an ex-Sukhoi test and development pilot, it is unsurprising that Jurgis’ flying abilities are virtually unparalleled, and in four display slots across the weekend he demonstrated why he is perhaps the best solo aerobatic display pilot in Europe. 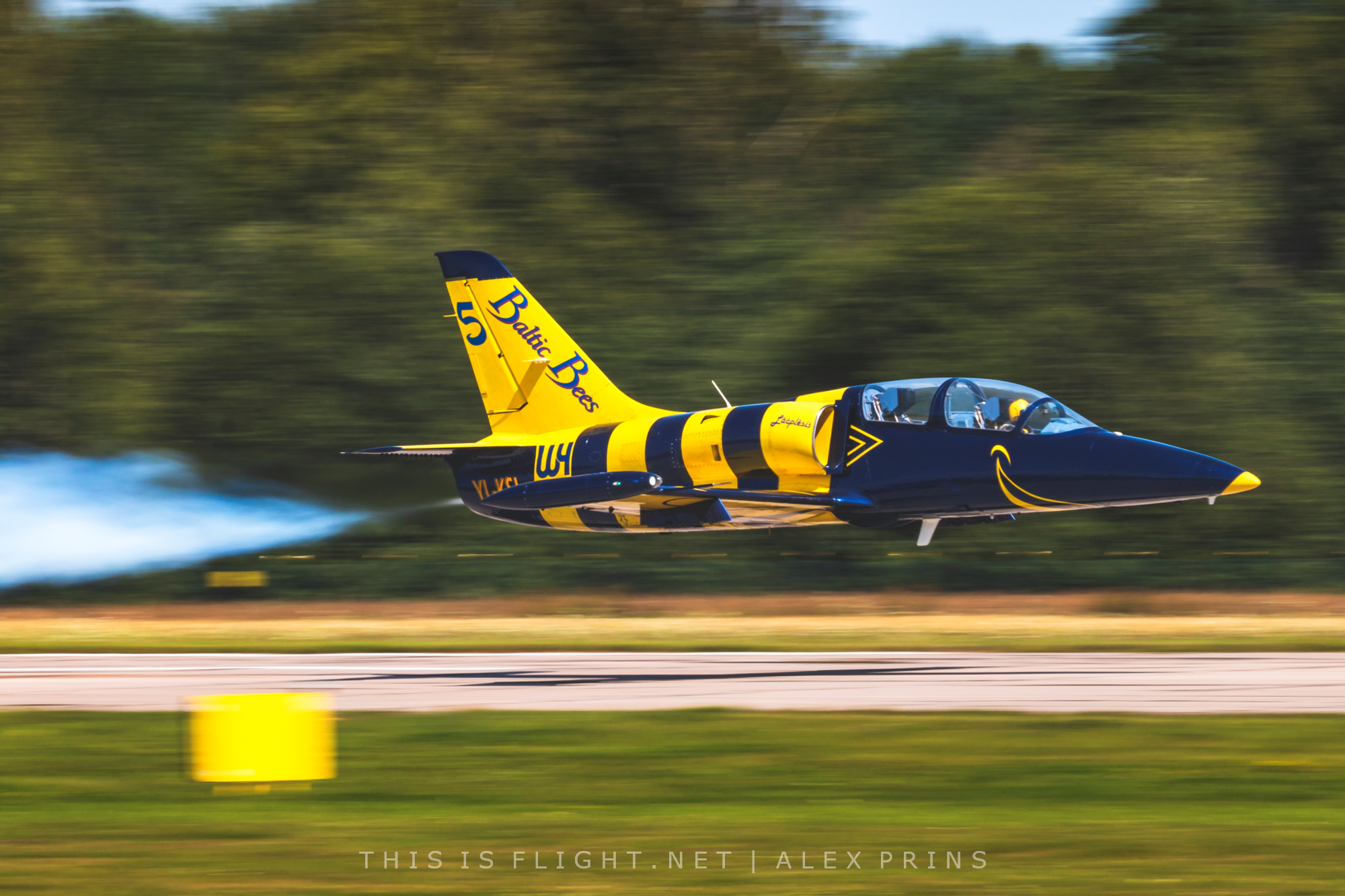 The first half of flying on both days was then rounded off by a “race” between one of the Baltic Bees’ L-39C Albatross jets and a BMW M5 provided by the show sponsor. The race itself featured several low-level flypasts by the jet, and culminated in an energetic solo display that in many ways proved more engaging than the solo flying segments of the Baltic Bees’ display proper. A half-hour break in the flying followed, allowing the crowd to find shade, food and water, or to enjoy the “Jurmala Airport Zoo”: a collection of ex-Soviet aircraft painted to mimic brightly coloured animals and insects. 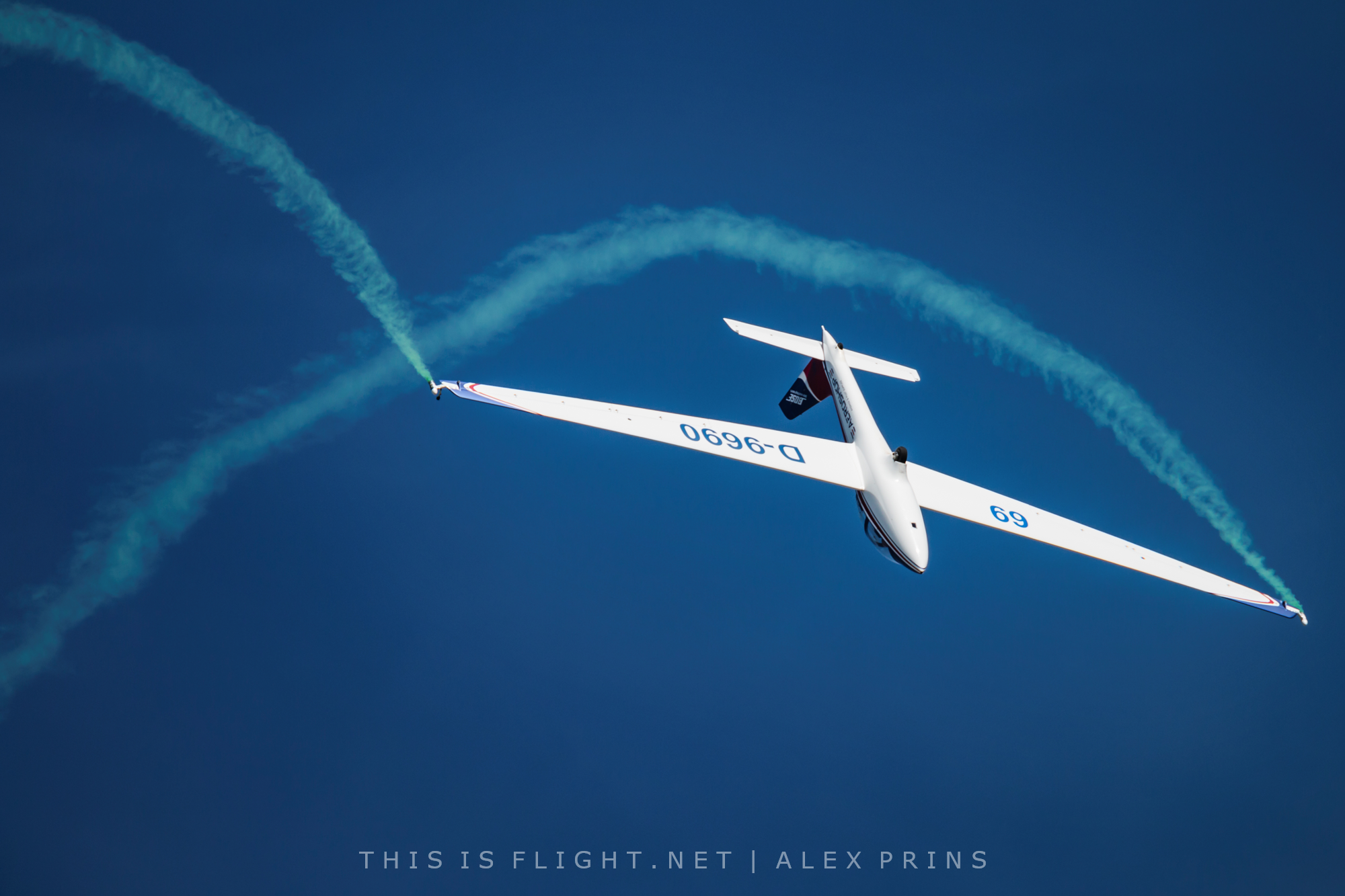 After the break the An-2 once again carried a group of parachutists to the heavens, this time including flagbearers. An abridged solo display followed, while the MDM-1 Fox glider that was to follow, was towed to altitude. The Fox is a popular glider type for competition and display flying: unsurprising given the type’s unlimited aerobatic capabilities. Despite an unfortunately weak wingtip smoke system, and a routine that was noticeably less high-energy than alternative displays on the European circuit, this was a well-considered and graceful routine, to ease us back into the second half of the flying display. 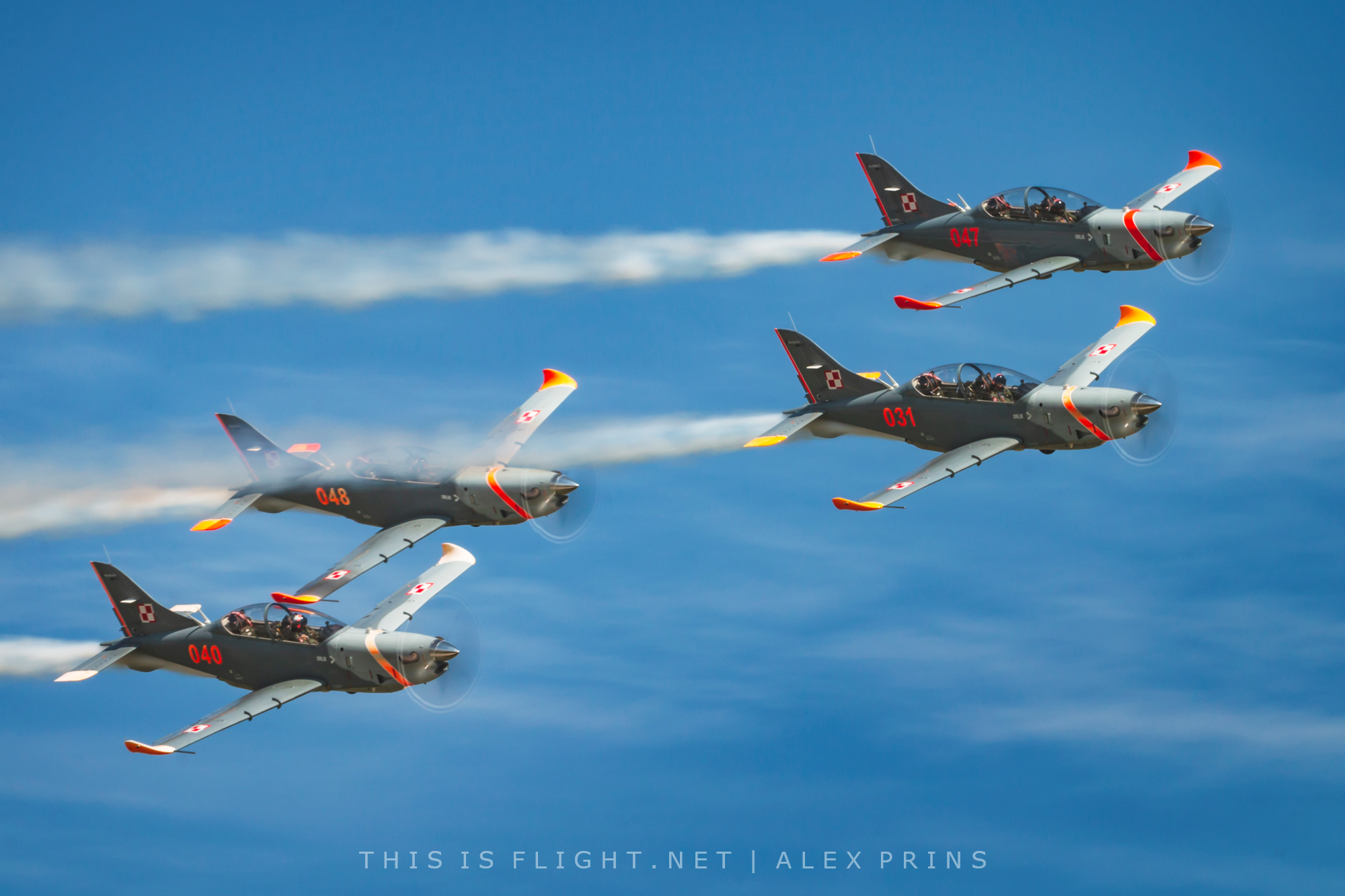 Team Orlik followed with a four-ship routine, returning after a well-received solo performance at last year’s inaugural event. The team this year appear to be flying displays with only four aircraft: an increase on last year which saw mainly pairs or solo displays, but still noticeably decreased from the original team of between six and eight. Watching the team practicing on the Friday, it seemed as though the flight of four aircraft was unplanned, and some improvisation was required for the breaks and segments where the formation was split into a solo and trio. Schedules for displays later this year suggest the team will remain with just the four aircraft: perhaps a result of the type’s ongoing upgrades in its Polish Air Force training role. As it was, the weekend’s displays were highly engaging, and it felt as though the team were working hard to retain an impact with their reduced numbers; perhaps the short display line suited the turboprop team, as even the solo segments were flown to good effect, and could be enjoyed from any vantage point along the crowdline. 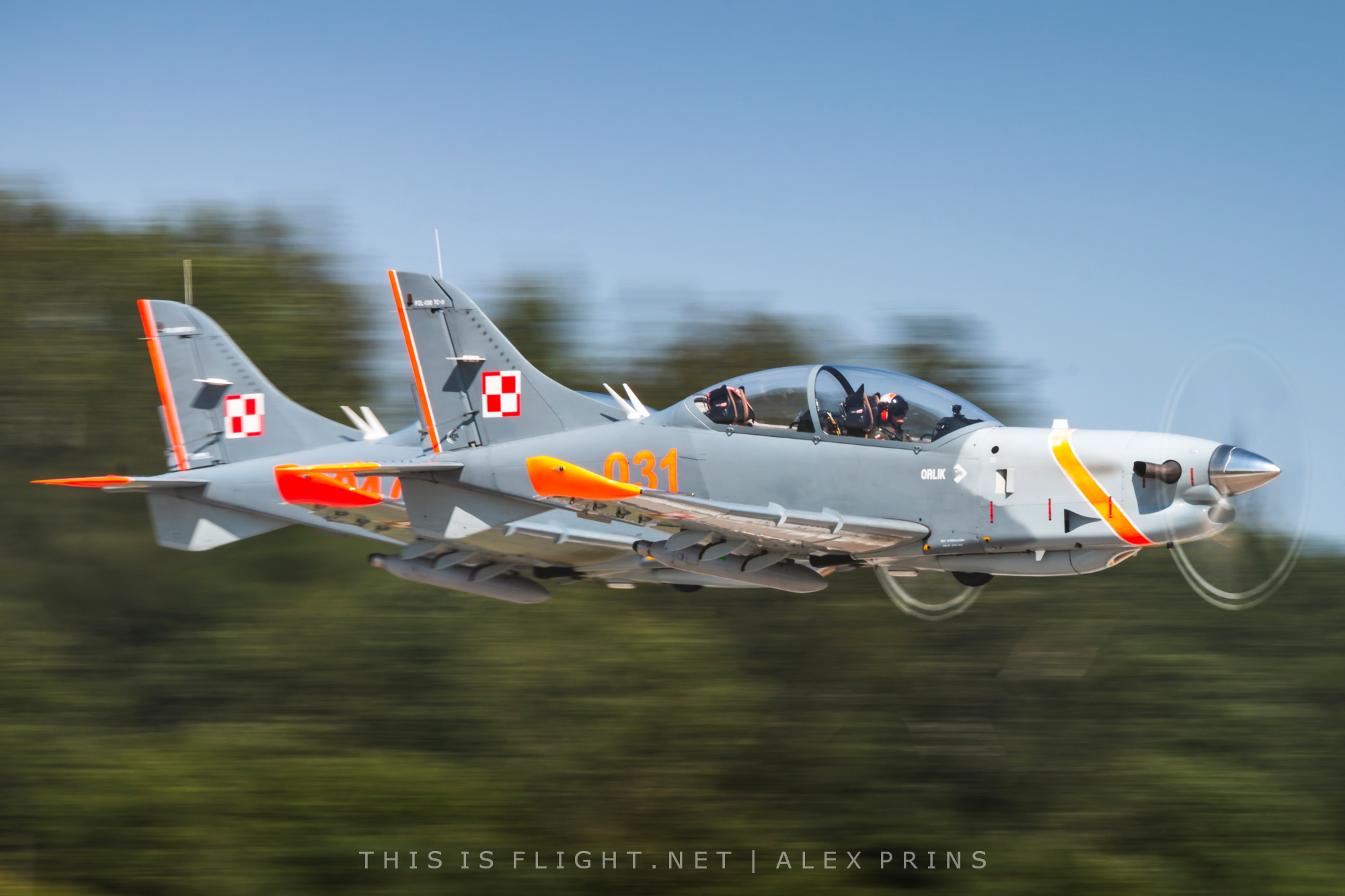 Similarly, the Robinson R44 helicopter that followed was not as underwhelming as this author expected when the ten-minute display slot was announced. Indeed, from its highly impressive take off through to its final “wingover”, this display was almost as surprising as the Antonov’s. In a head-to-head with the earlier Blackhawk, the R44 trounced its military cousin in every aspect of display flying. As the US Army was only able to commit to Saturday’s flying display, the R44 was a well-deserved stand in, in a second display slot, and visitors were not short-changed for the loss of the transport helicopter. The R44 display was energetic, compact, and built well on the type’s character, excelling in every way that the Blackhawk failed. 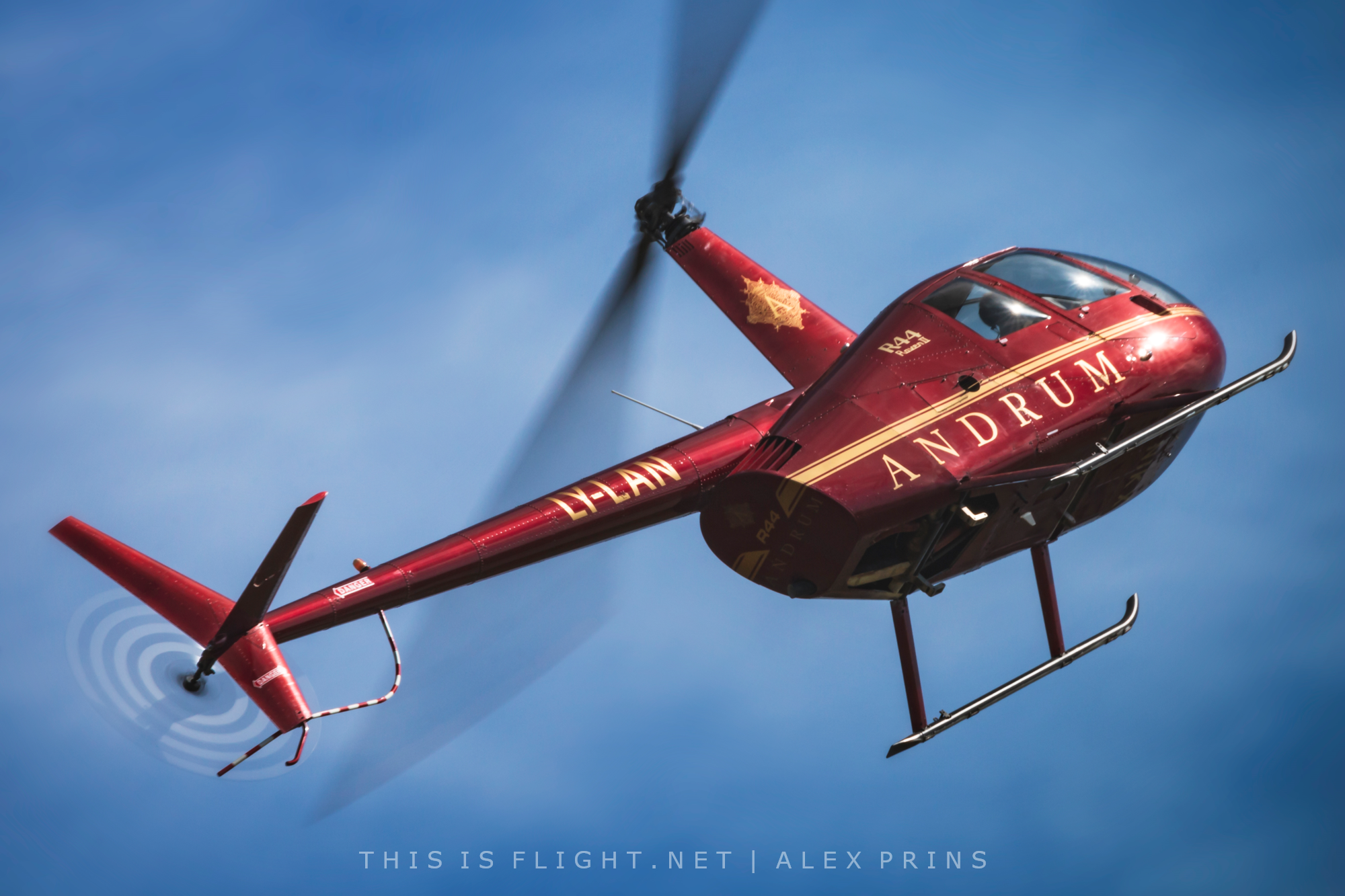 On both days, this helicopter solo was succeeded by the Polish Air Force’s F-16C Tiger Demo Team, another airshow debut for Latvia. Considering Wings over Baltic’s clash with RIAT in the UK, the fact that the Polish Block 52+ solo (and also the MiG-29 display, which was unfortunately cancelled) was allocated to Latvia speaks volumes for the status of this young airshow. The lack of flares was but the only disappointment in this rip-roaring solo routine: the best showing this author has seen by the team since it was established in 2015. The short crowdline was once again a blessing, as the finale ‘dedication pass’ brought the aircraft close-in for a prolonged topside, sweeping around the airport terminal in a tight orbit. 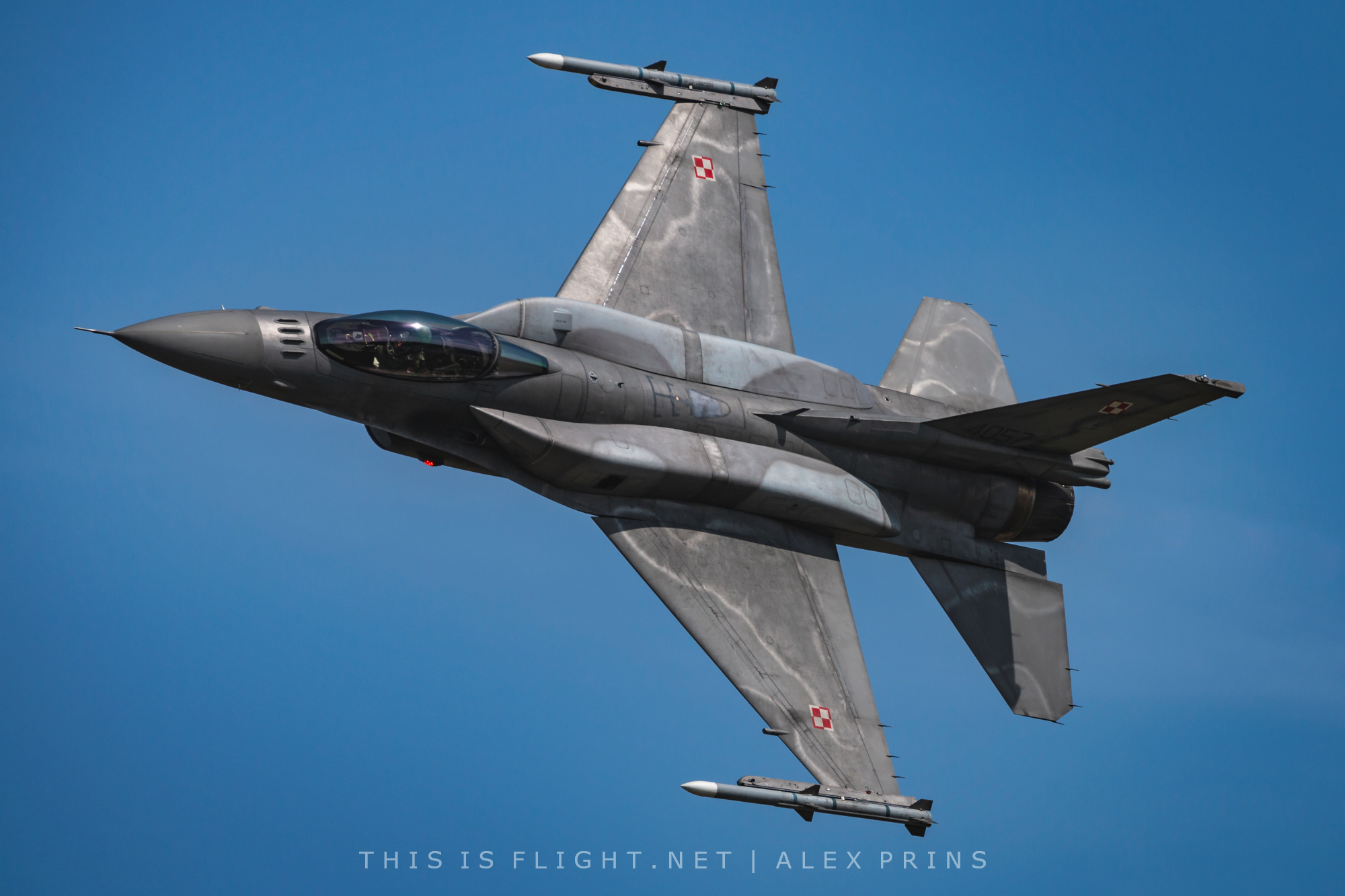 Jurgis Kairys again followed the fast jet display, perhaps unfairly acting as a warm-up display for the “home team”. As Jurgis laid down a final smoke screen across the spectator area, the resident Baltic Bees Jet Team took off in formation to bring the curtain down on their own airshow. Wings Over Baltics 2019 saw the team debut as a formation of seven aircraft, though this was unfortunately only briefly seen on Sunday, as one of the jets landed with a mechanical issue. The additional seventh aircraft makes the team the largest civilian jet team in the world (the Breitling Jet Team now mostly perform as a six-ship), and their international reputation as an engaging and tightly flown formation team continues to grow. Aside from their opening loop on Saturday, where one aircraft ended up trailing the formation by some distance, the team’s display was a resounding success, and was rightfully the most well-received of the day, with the assembled spectators. 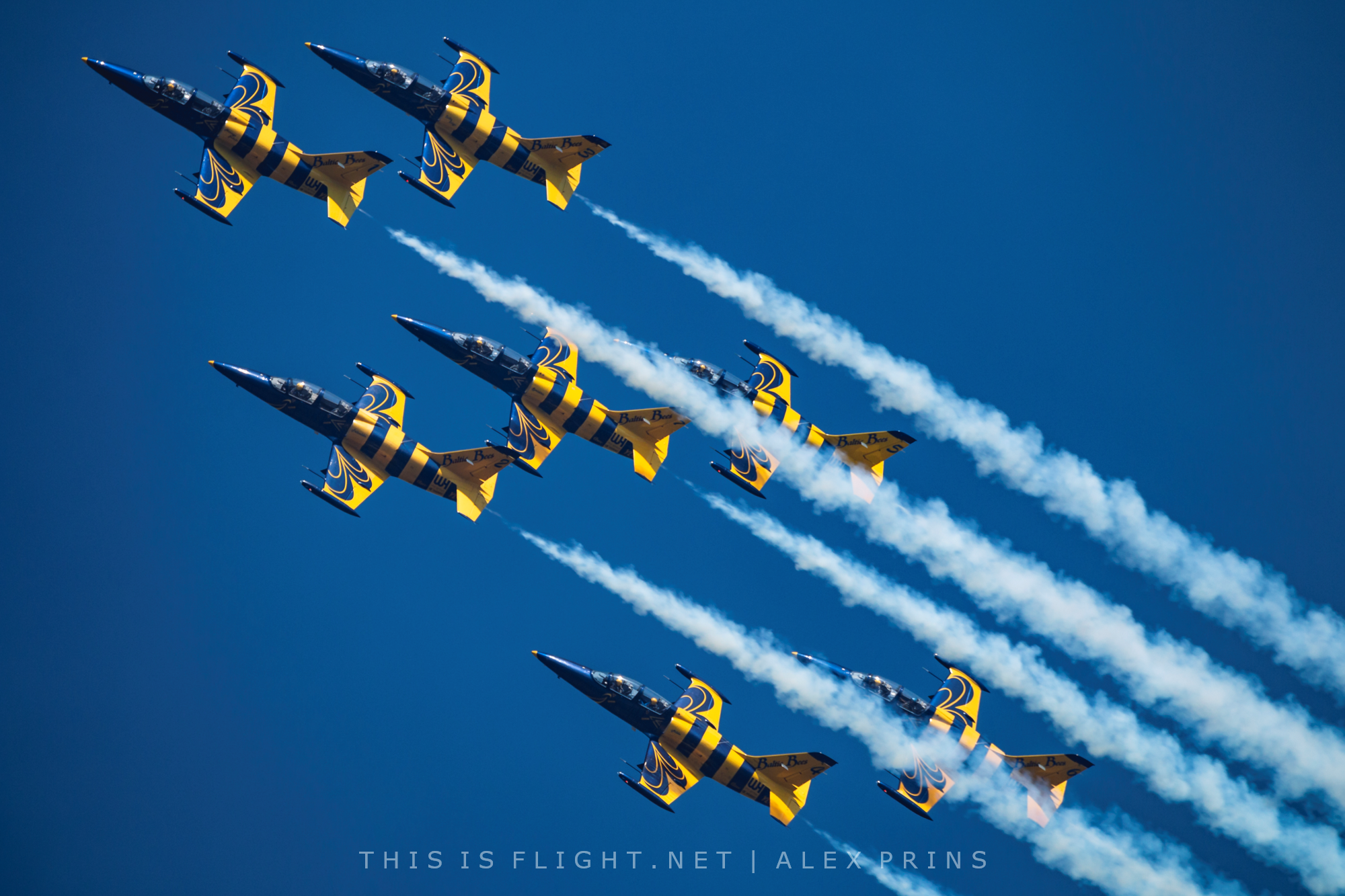 If one were to be critical, the first half of the display was a little broken up by the pauses between formation flypasts as the team repositioned, however once the formation split into smaller groups by means of a superb seven-ship break, the display was much better balanced and flowing. While the solo aspect was more restricted than earlier in the day, it was nonetheless as tightly flown and in-your-face as any solo jet seen across the weekend, and the inclusion of pairs and smaller formation aspects made for a captivating display. 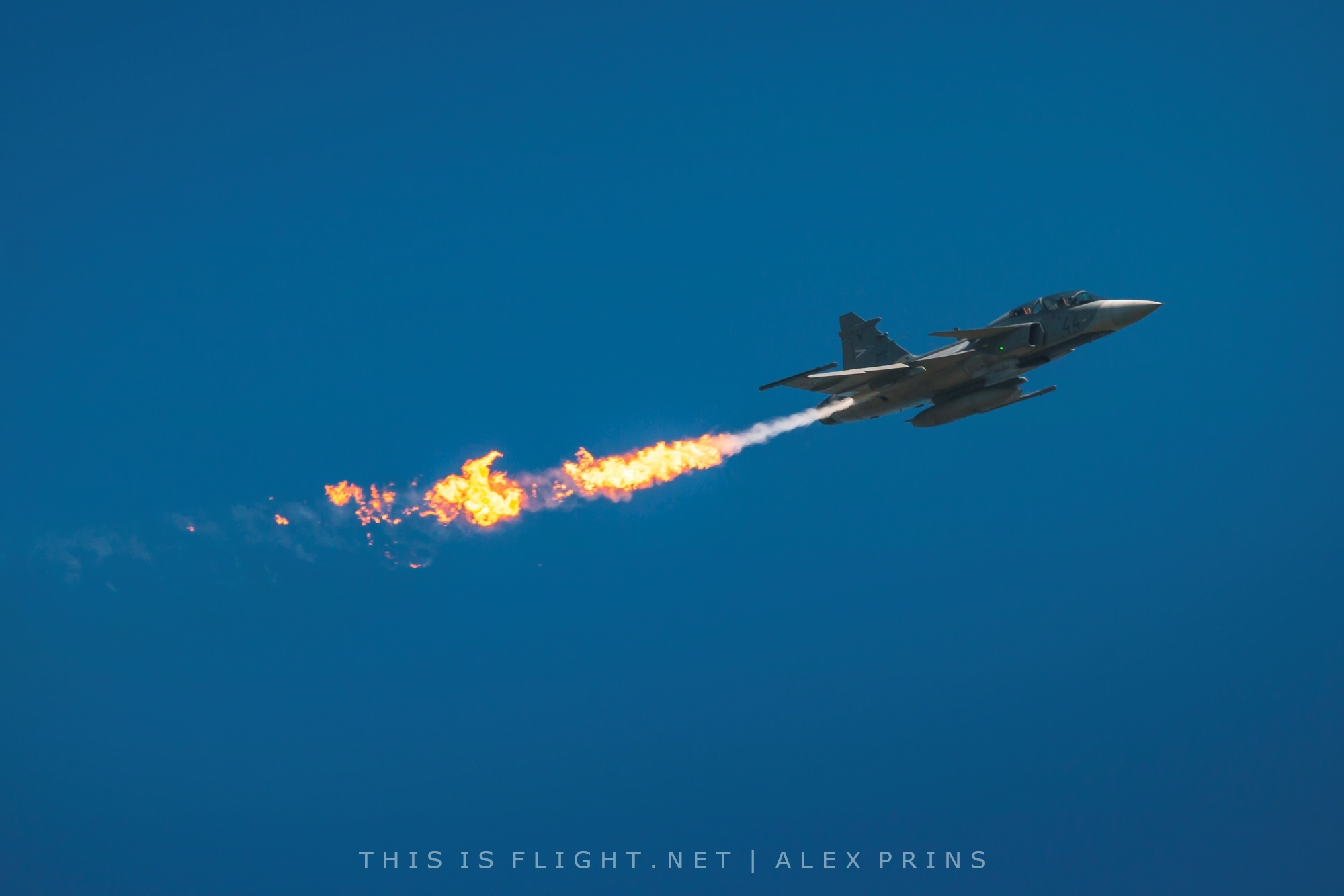 It was fitting that the Bees’ home airshow, organised by several hardworking members, was closed by their landmark formation: symbolic of the continuing growth and success of the team, and their self-run airshow. The four-and-a-half hour flying display featured military participation, civilian ultralights, and everything in between; had there been no cancellations (all of which were outside of the organisers’ control) then this airshow would perhaps have been commended as one of the best of 2019. As it was, it is difficult to find much fault with this event. 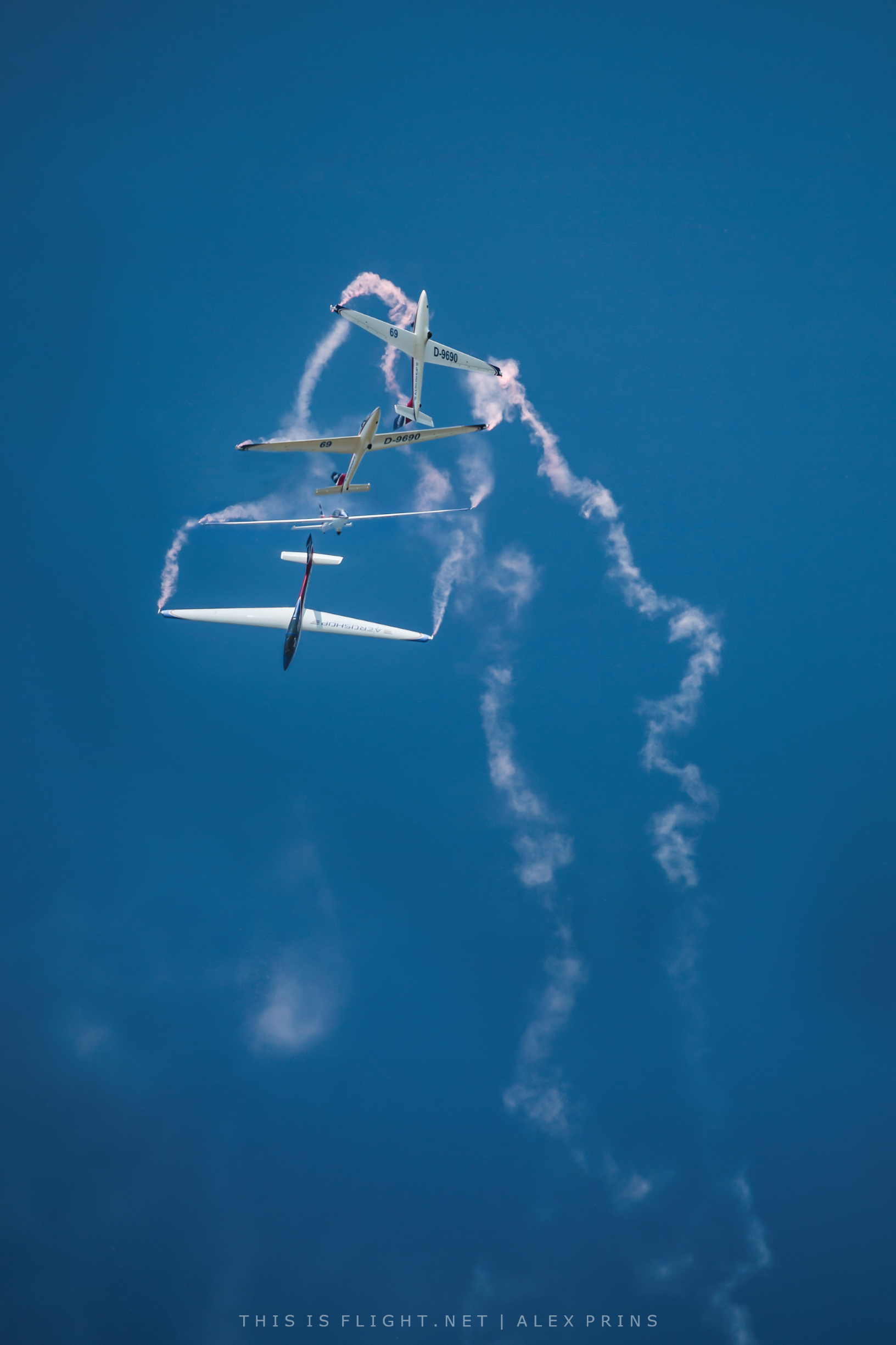 This author was onsite by 9 o’clock each morning, so did not see much of the traffic or queuing that conceivably could have materialised (it seemed that the crowd did not reach full capacity until midday) however this is more likely due to late arrivals than difficulties with traffic management and the like. Spotters were well catered for, with a dedicated (if rickety!) enclosure and raised seating, and the general entry area was peppered with trade stalls, static aircraft and festival stage after the flying display. 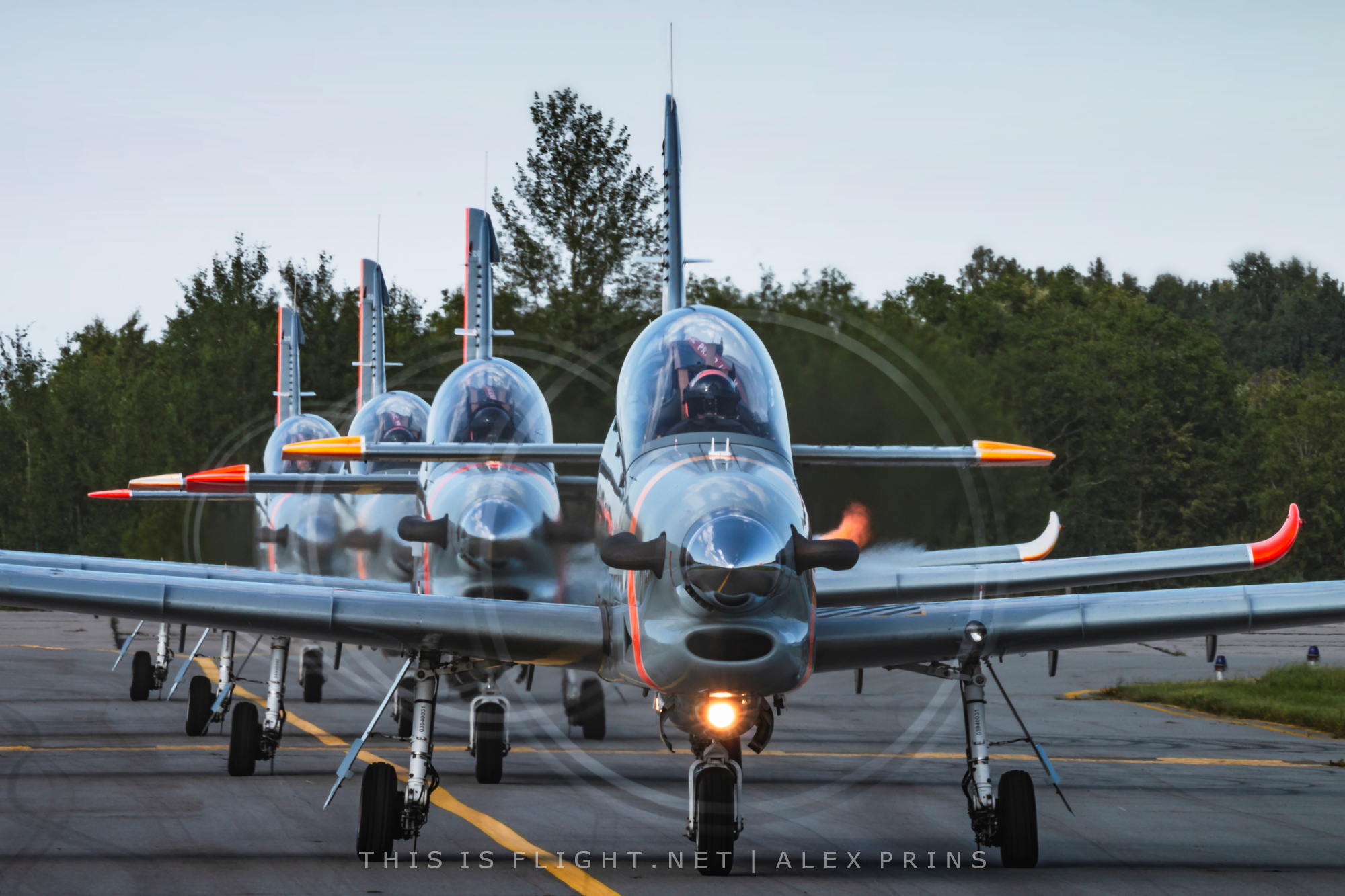 NATO’s presence on the ground and in the flying display demonstrates the political significance of this event in the Baltic region, and the support of neighbouring countries looks only set to grow. In the 2018 video report for this event, we concluded that Wings over Baltics “could morph into something very special”. Indeed, should this upwards trajectory continue, both with regards to military and top-drawer civilian displays, it would be no surprise if this becomes one of the most lauded airshows in Europe.