For the newest Canadian air show in Canada, the organisers of the Volaria Aeronautic Festival wanted to set themselves apart and made it their mission to celebrate aeronautics the Montreal way, by bringing together families, aviation enthusiasts and the many companies in this industry under the banner of fun and discovery. 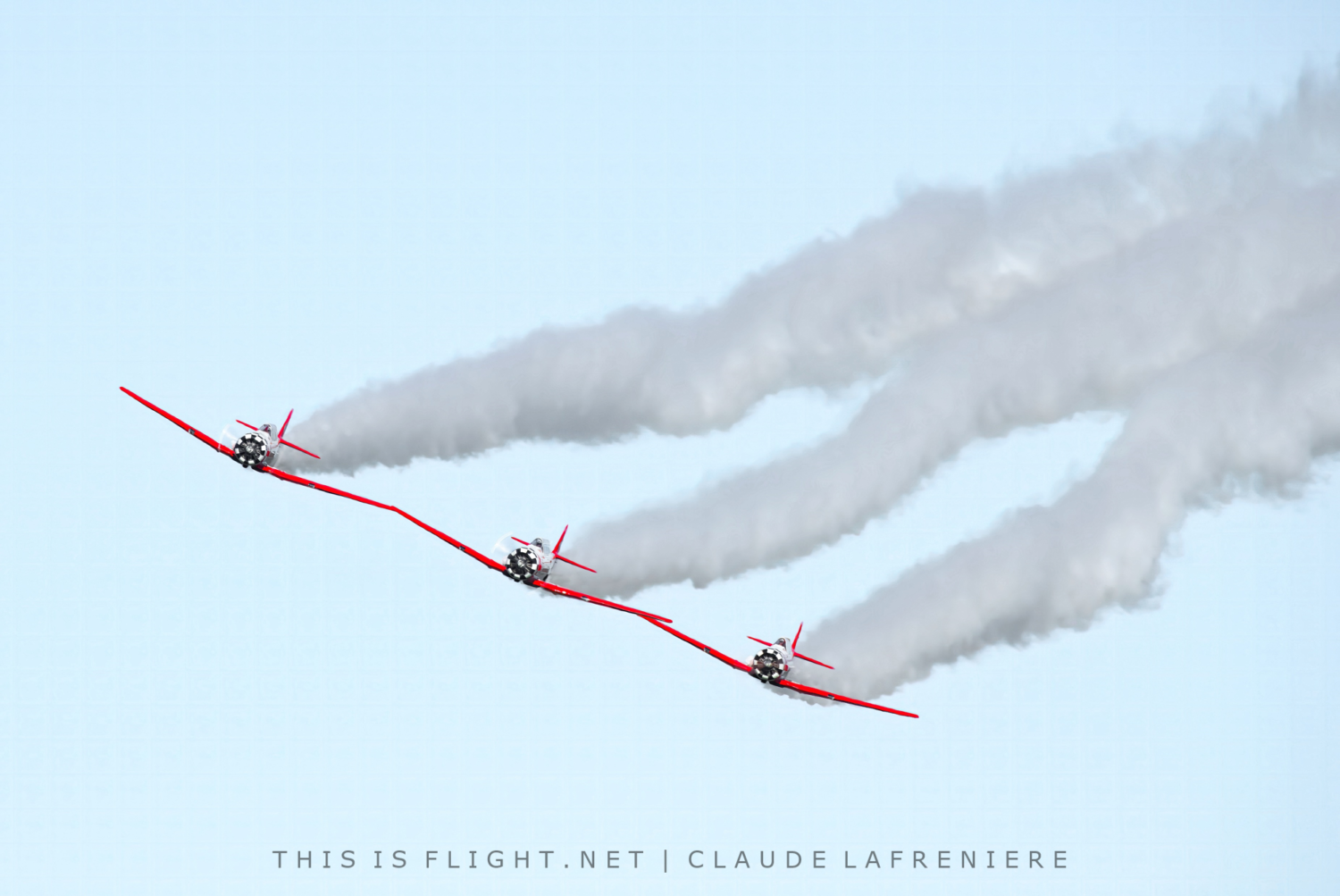 Although aircraft were the central attraction, the festival was not only for aviation enthusiasts. It included themed exhibits and family activities with a small automotive focus, as it was hosted by the International Center of Advanced Racing (ICAR), a large motorsport complex adjacent to the Mirabel Airport runways. 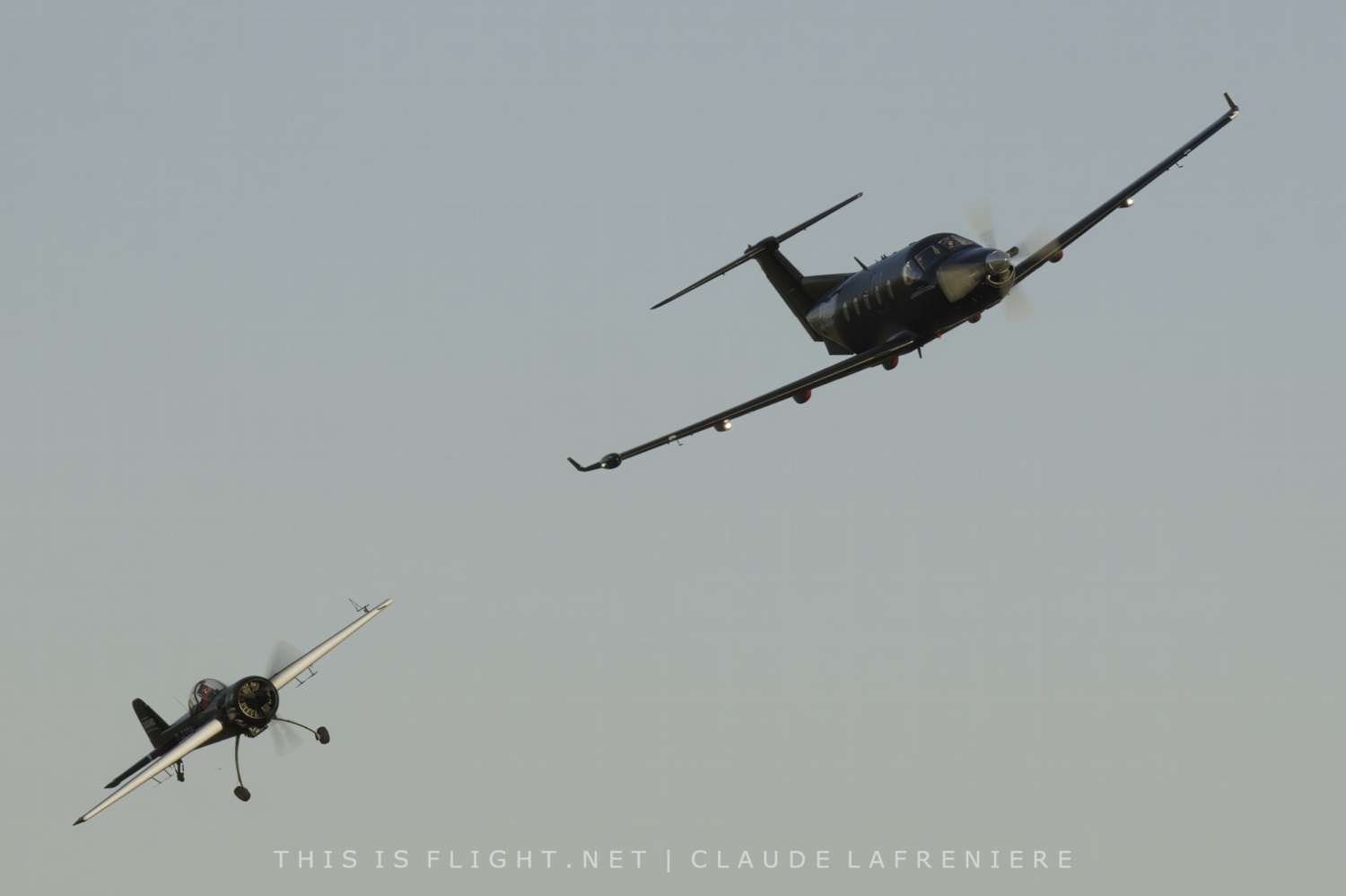 The last major airshow at Mirabel was held 25 years ago, in May 1997, to celebrate the 50th anniversary of supersonic flight. The new Volaria Aeronautics Festival, initially scheduled for 2020 but postponed twice due to the pandemic, finally changed this with their debut show on the 24th-25th September 2022.

The ICAR site, which is more than 1km from end to end, easily accommodated the many elements of the festival. Among the themed areas was an Aerospace Job and Training Fair – the largest of its kind that we have seen in Montreal – at which visitors could meet almost all of the major aerospace employers and educational institutions present in Quebec. There was also a “Neighbourhood of the Future” zone dedicated to demonstrating the aviation industry’s progress in the face of environmental concerns. 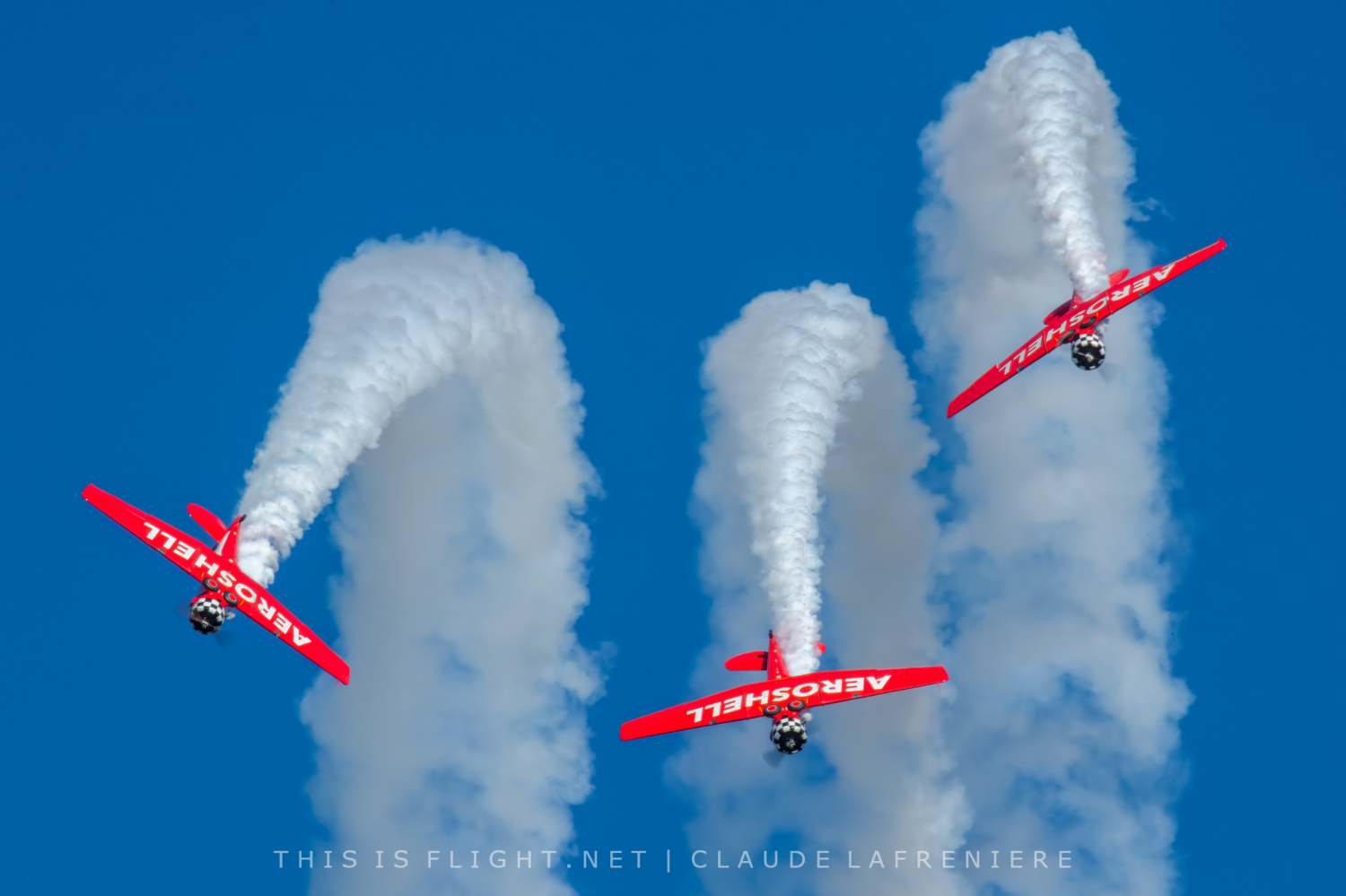 One thing not present in abundance, despite the large amount of space available, was parking space, which was severely limited as the old airport parking lots no longer exist. Therefore, the festival encouraged the use of public transport, running shuttle buses to the site, and waiving the $10 car parking fee for those car-pooling with more than four people per vehicle. General admission started at $54 per person for one day, or $88 for a weekend pass. Clearly the high prices did not deter the spectators, with 50,000 spectators turning out to enjoy the show. Sadly for enthusiasts and photographers, however, there was no “photo pit” and no area with an unobstructed view. This was a shame as general admission visitors were quite far from the action, with tall fences obstructing the view, even in the VIP and Elite Chalet areas.

With the show being organised by ICAR’s automotive specialists, air operations were conducted by the team from the Aero-Gatineau Ottawa airshow. The number of military aircraft was a bit limited, with some of the announced static display assets (such as the CP-140 Aurora) being absent. Despite this, visitors could see some 15 aircraft, including private helicopters, an L-29 Delfin, two 737-300 freighters and a USAF C-17A Globemaster II, among others. 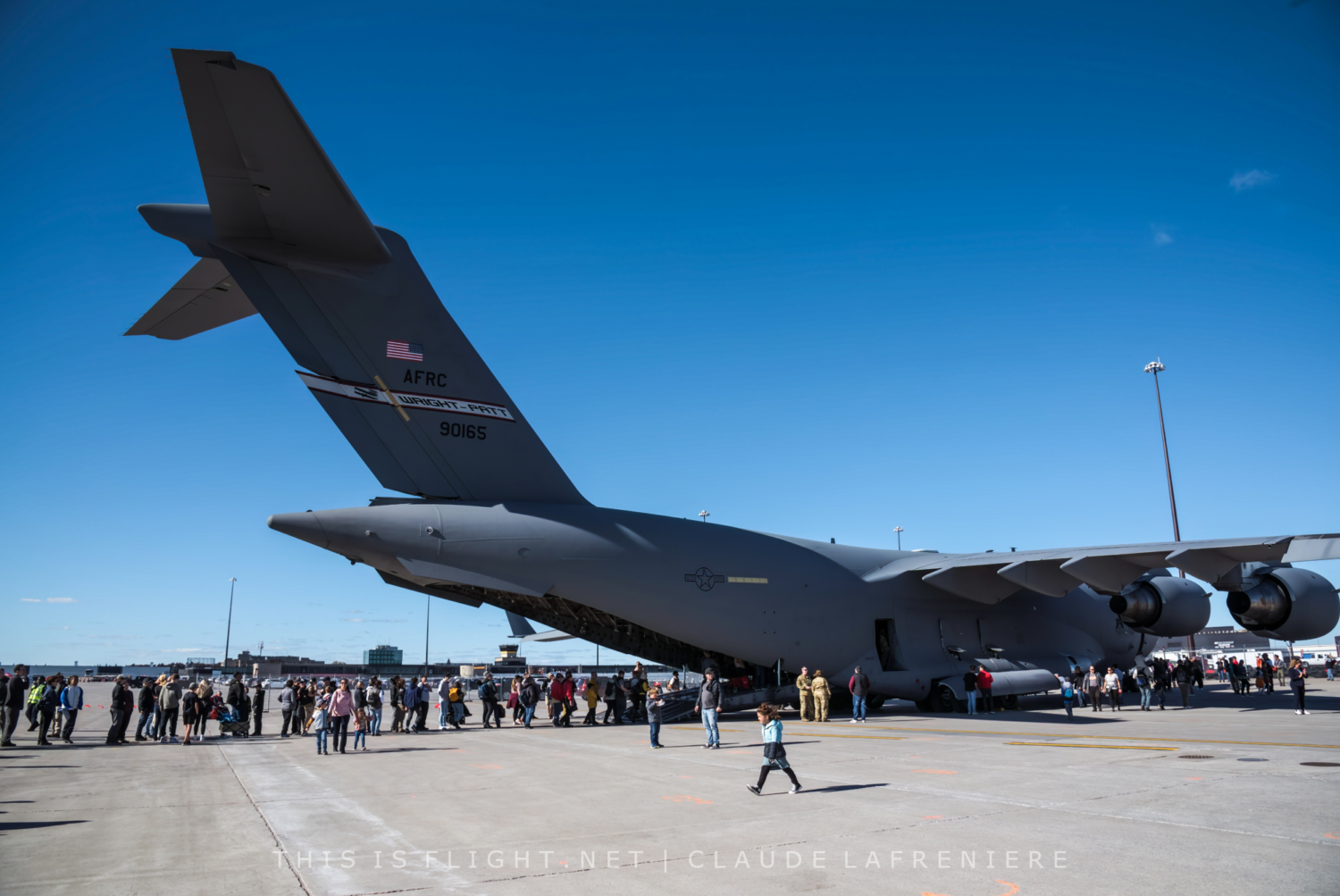 Like many Canadian airshows in 2022, the festival had to deal with the absence of one of its main attractions, the Snowbirds, who were grounded following an accident in August. Despite this, the program featured a dozen performers, including demonstrations from the RCAF CF-118A Hornet and USAF F-16C Fighting Falcon. To fill the void left by the Snowbirds, the organisers booked the Aeroshell aerobatic team, who were unfortunately only able to fly as a three-ship, with one aircraft remaining at its home base due to mechanical problems. The team members performed their aerial manoeuvres in impressively tight and precise formation during the daytime program, before returning to participate in the night show.

Other civilian performers included Pete McLeod in his Extra 300LC, who, in addition to his solo routine, competed a friendly two-lap race against Mario Hamel in his Pitts Model 12. Pete also raced against a Ferrari F458. Mario returned with the Yak Attack team, flying his Pitts alongside Dan Fortin’s Nanchang CJ-6A. Also flying in the show was Nathan Hammond of Ghostwriter Airshows in his DHC-1 Chipmunk, Manfred Radius in the H-101 Salto, Martin Hivon in the Yak-55M and a CL-145 Super Scooper, which performed a handling demonstration on the Sunday, capped off by a 6,140-litre water drop.

The presence of the RCAF CF-18 demonstration team, piloted this year by Captain Jesse Haggart-Smith, aka Modem, from 410 Squadron in Cold Lake, Alberta, was much appreciated by the audience. The aircraft is painted with a unique theme each year and this time it featured the theme “Fighter Operations at Home and Abroad” rendered in the operational grey colour palette with a geometric pattern that references the wings of the CF-18’s namesake, the Hornet. 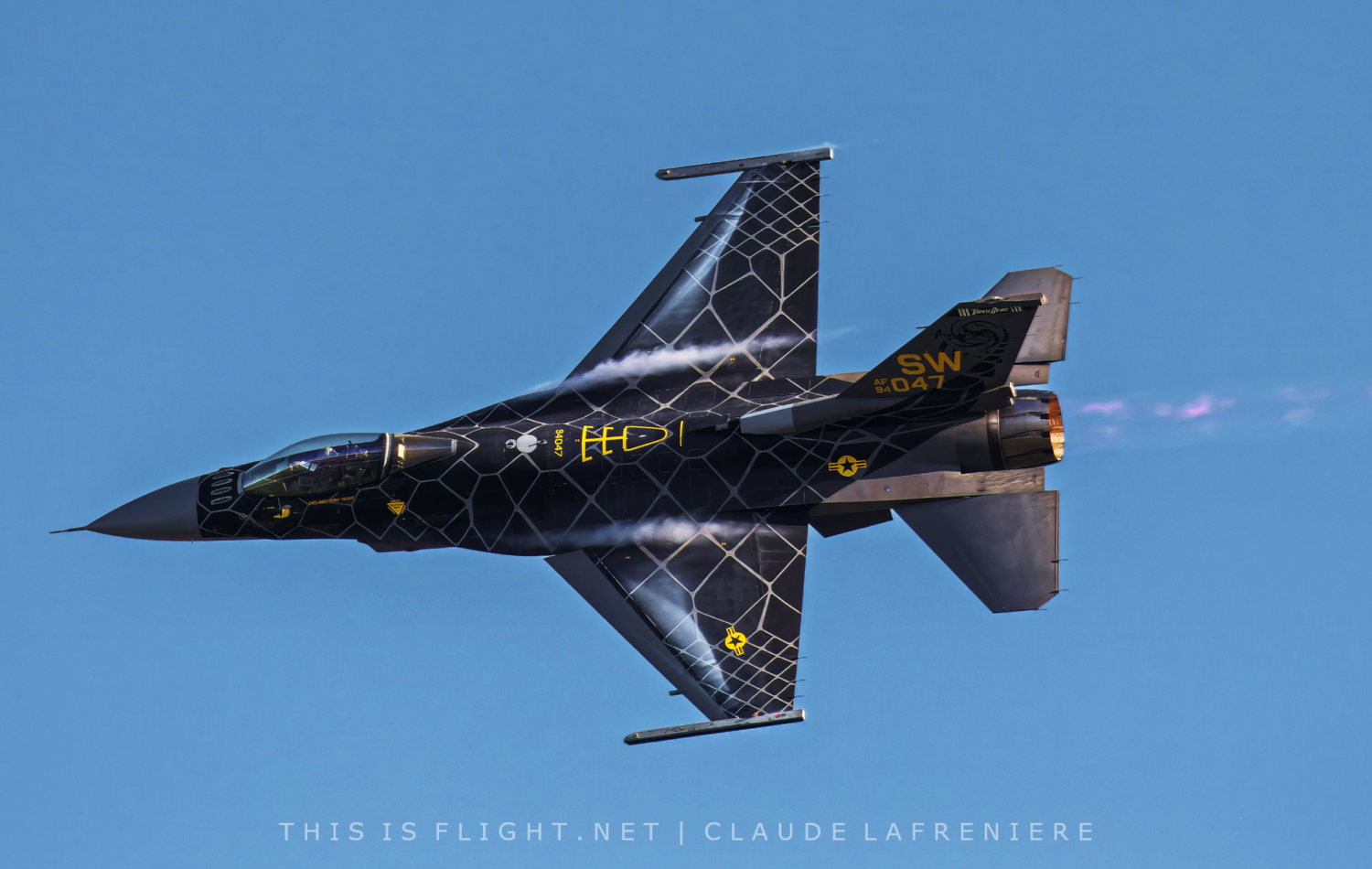 The most-anticipated attraction at the Volaria Aeronautics Festival was the USAF’s F-16 Viper Demonstration Team, from Shaw Air Force Base in Sumter, South Carolina. The display utilised the team’s special-scheme jet, Venom, which is inspired by the F-16’s informal nickname.

However, it was the night show on the Saturday night that was, without doubt, the highlight. Never seen before in eastern Canada, this unique spectacle saw Nathan Hammond, Manfred Radius and the Aeroshell aerobatic teams return for an enchanting display of colour while performing aerobatics after dark. These night time performances were accompanied by a magnificent multimedia show on the ground, with a live DJ, lasers, lights, projections and pyrotechnics all installed around a main stage. 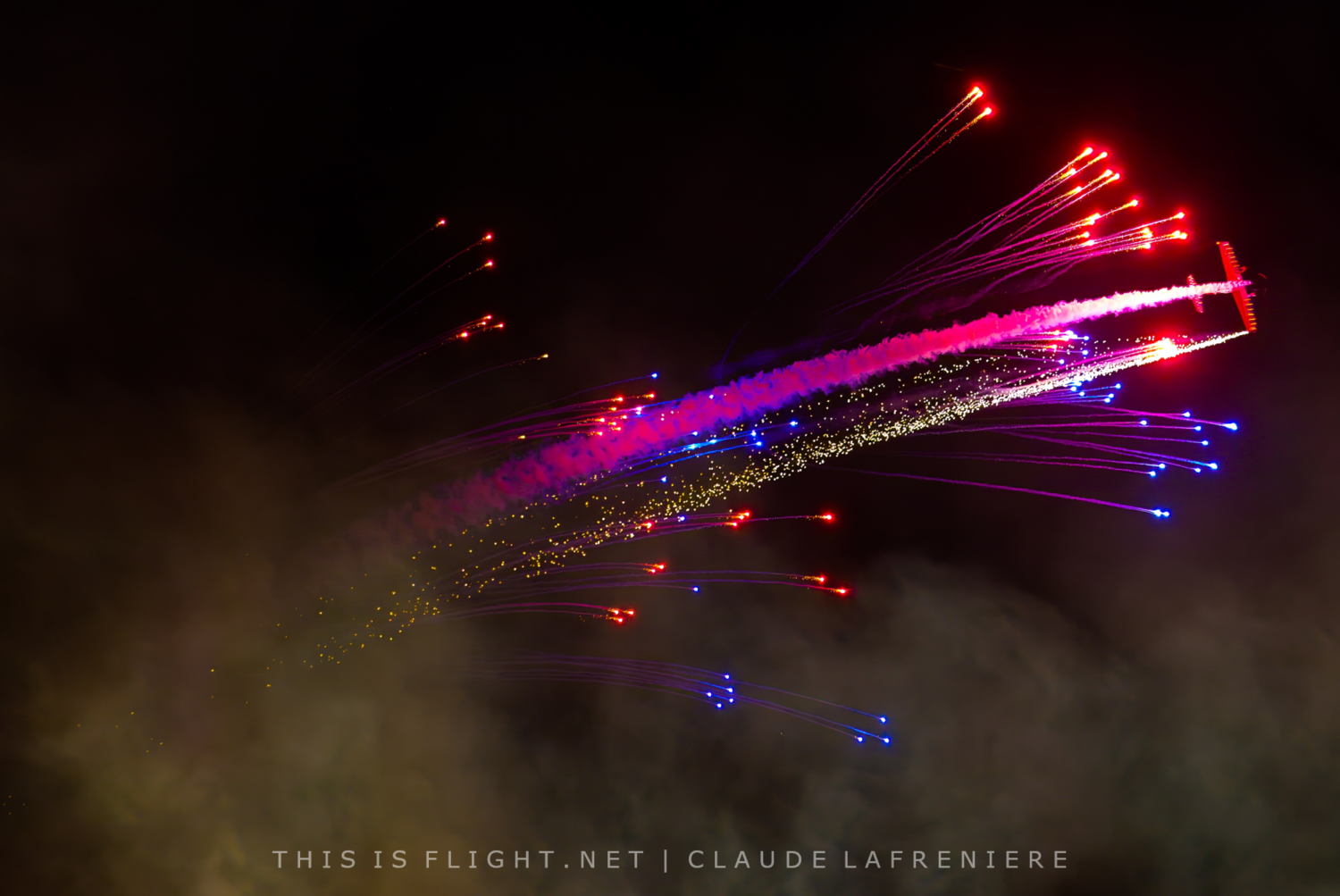 The organisers of the Volaria Aeronautics Festival wanted to go beyond what a traditional airshow offers, adding large thematic exhibitions and an impressive night show, and in doing so, they have set a new standard for this type of event in Canada. Of course, there are adjustments to be made for the second edition, which should ideally include a photo pit, the installation of a better and more extensive sound system, the relocation of the job fair to a more optimum position and the re-arranging of tall fences to allow spectators to see the action more clearly.

Ultimately, though, few airshows in Canada can attract 50,000 visitors in a single weekend – and even fewer in their first edition. This success has already seen the prestigious USAF Thunderbirds announce their participation in the event’s second edition; we look forward to returning on the 8th-10th September 2023.