With its main themes of the 75th anniversary of the USAF and the 80th anniversary of Air Education Training Command, The Great Texas Airshow at Randolph AFB took place on the 22nd-24th April 2022, for the first time in five years. 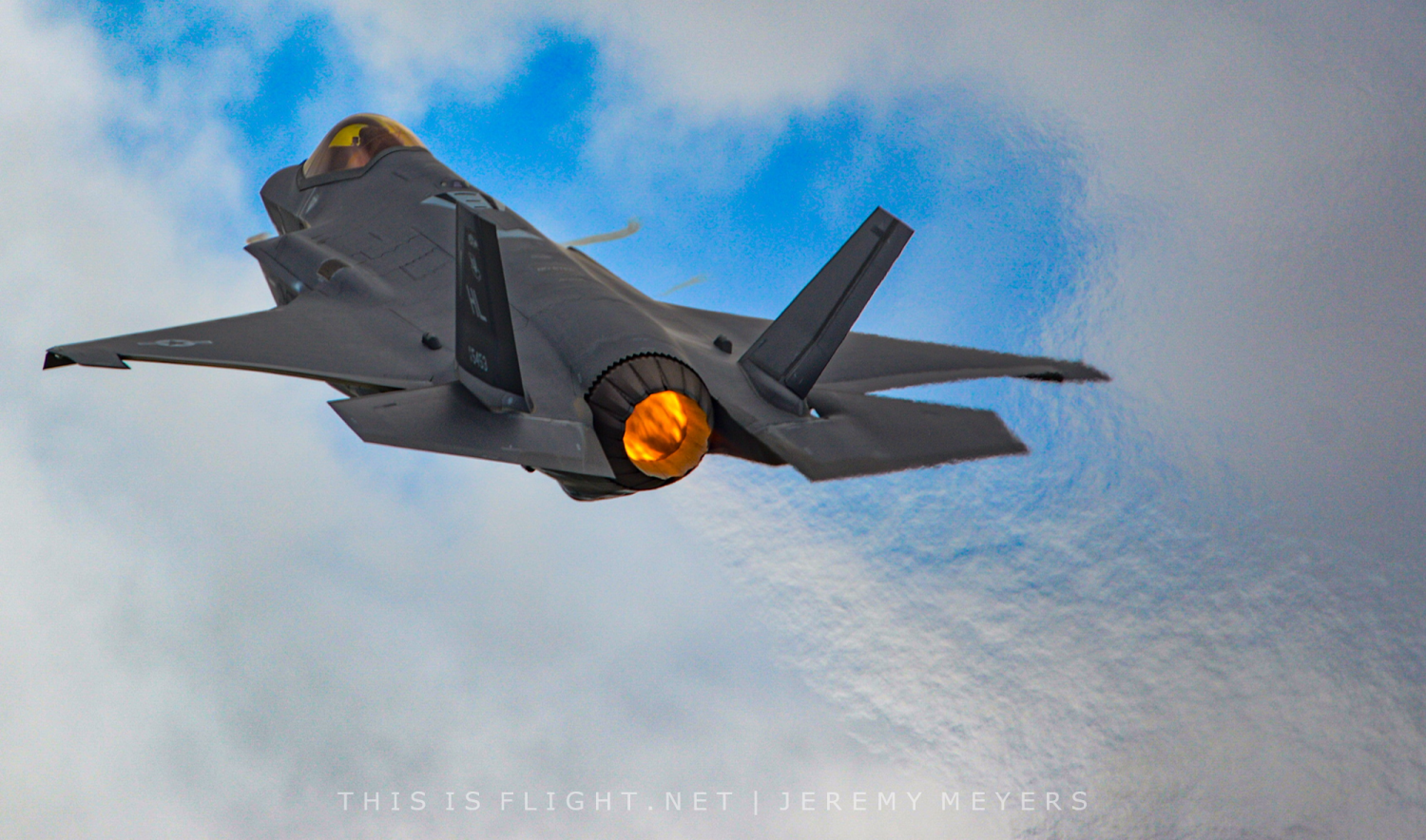 In the week leading up to the event, rain and thunderstorms were in the forecast. Luckily, the clouds burned off through Saturday morning and by mid-afternoon, the base had reached its full capacity of 200,000.

This year’s airshow featured one of the most impressive static display line ups to date. Rare aircraft like Textron Airland Scorpion jet and AT-6 Wolverine were on hand, as well as a pair of F/A-18E Super Hornets and a single E-2 Hawkeye from the US Navy, an Apache from the US Army and an MV-22 Osprey from the Marine Corps. Not to be outdone, the USAF brought no less than 25 statics, including aircraft such as the B-52, KC-135, KC-46, C-5, F-22, F-35, C-21, AC-130W and more. An impressive total of five F-15s were also presented on static display, with a pair of F-15Cs from the Oregon Air National Guard, a pair of F-15Es from Mountain Home AFB and a single F-15EX, which had less than 300 hours of operating time, having been built in 2020. A number of warbirds were also present, with one particularly rare participant being Lewis Air Legends’ A-20 Havoc, the only aircraft of its kind flying today.

Perhaps the only down side to the static display is that it was located some distance from the main show site; static aircraft were parked on the south ramp, with the air display viewing area was on the west ramp, with the crowdline running parallel to runway 33L/15R. 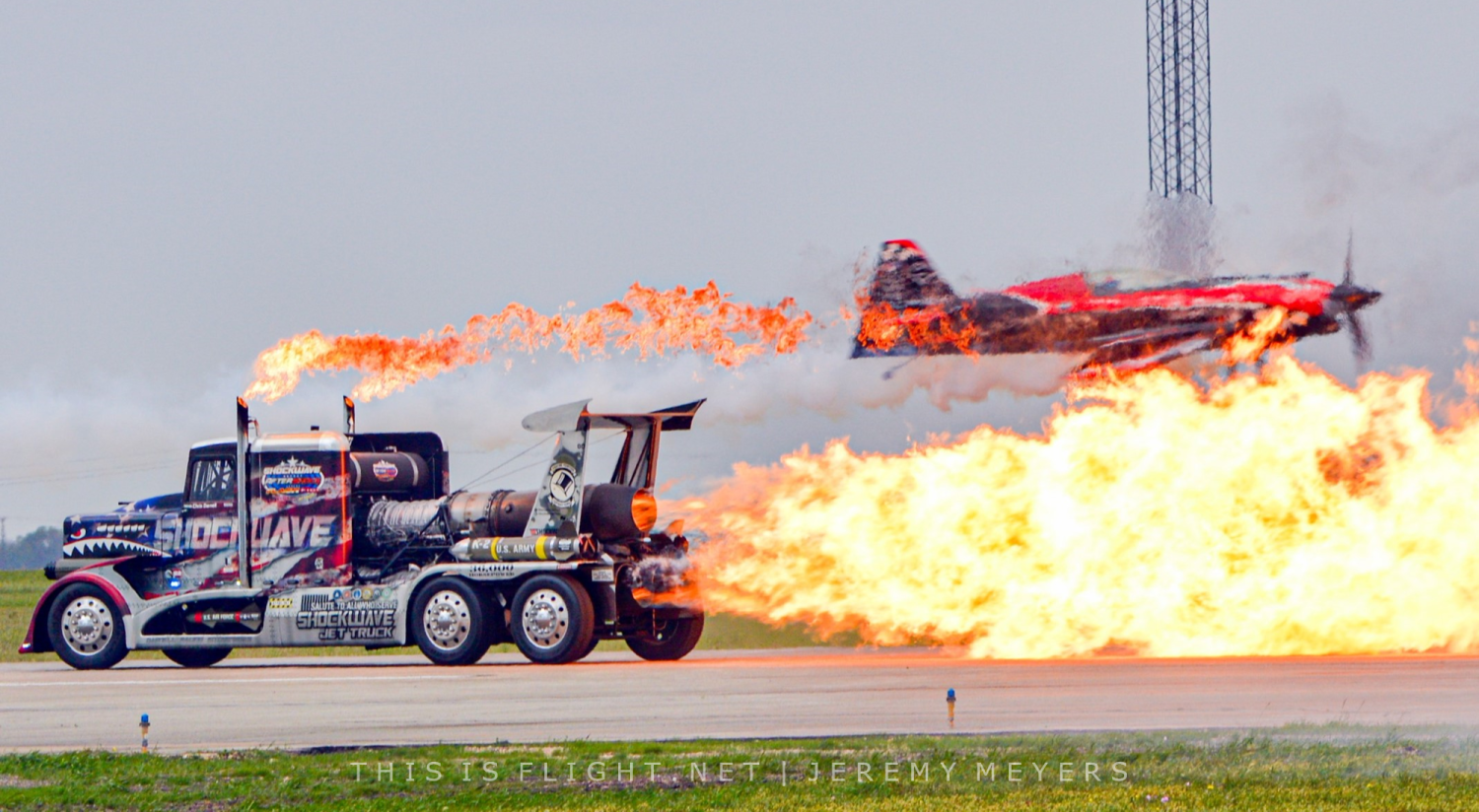 Like the static display, the air display had no shortage of interesting aircraft, which started on Saturday with Kent Pietsch in his Interstate Cadet. It was not his usual comedy routine, but instead showcased the aircraft’s aerobatic performance with a sequence of loops and rolls. Next up was Tora Tora Tora, joined by a P-40 and B-17 “Texas Raiders”.

Then came the official opening ceremonies, and a flyover of four F-16s from the 149th Fighter Wing before Bill Stein and Rob Holland entered the box and each performed an aerobatic “teaser” for their main performance later in the day. The Shockwave Jet Truck made their show even more exciting, with Rob and Bill both flying inverted as they raced Shockwave down the runway. Closing out this segment of the show was Tom Larkin in his BD-5J “Mini Jet”. 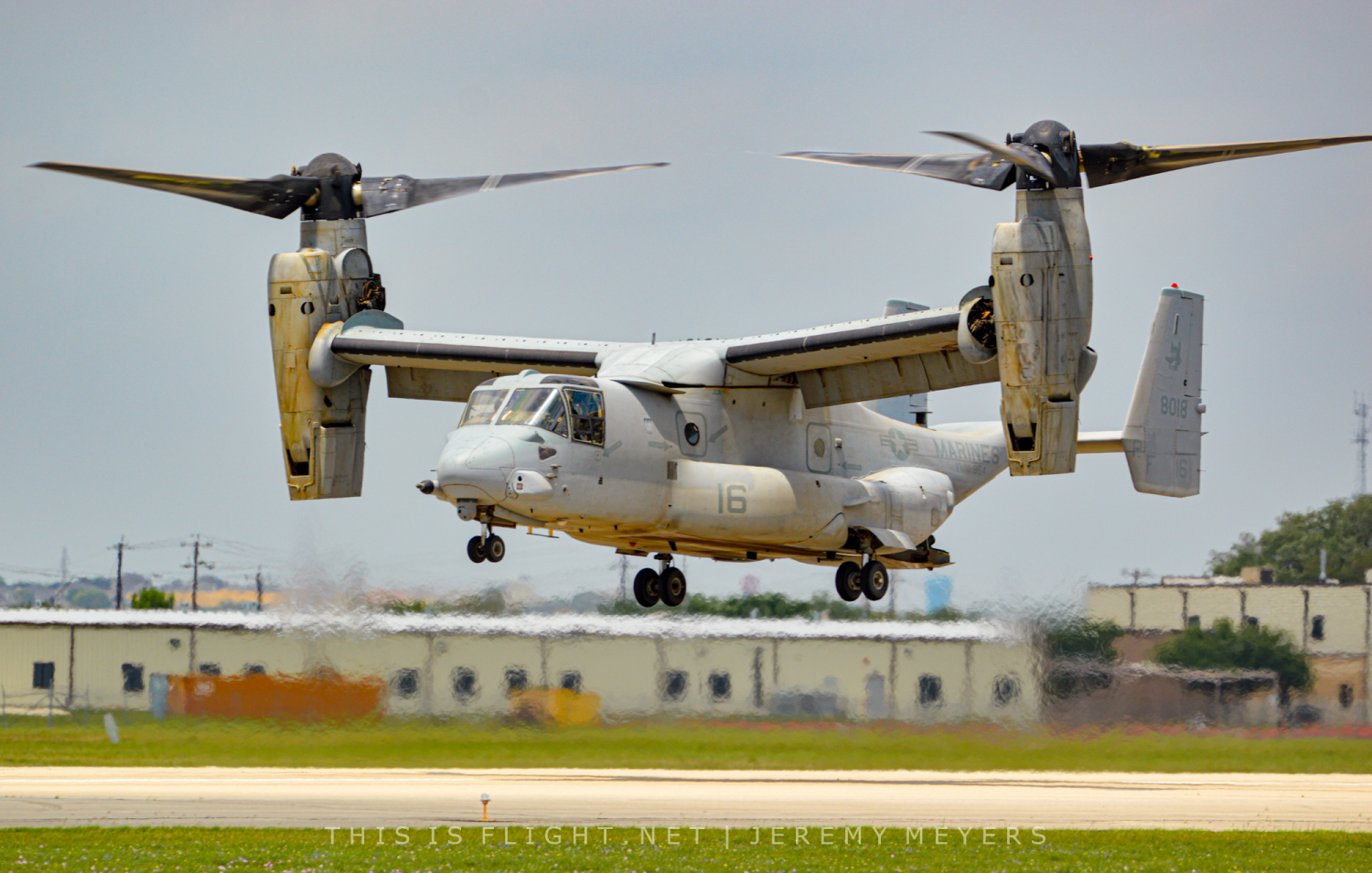 The next part of the show was more focussed on the military performers. It included the C-17 Globemaster West Coast Demonstration Team, Kent Pietsch (this time performing his usual trucktop landing), one of just three scheduled appearances by the US Marine Corps’ MV-22B Osprey demonstration, Lewis Air Legends’ CF-5D Freedom Fighter, the USAF’s F-35A Lightning II demonstration and a bomber parade, which featured B-25 “Devil Dog”, B-17 “Texas Raiders” and a B-52 from Barksdale flying past in a loose trail formation with a wall of fire underneath. 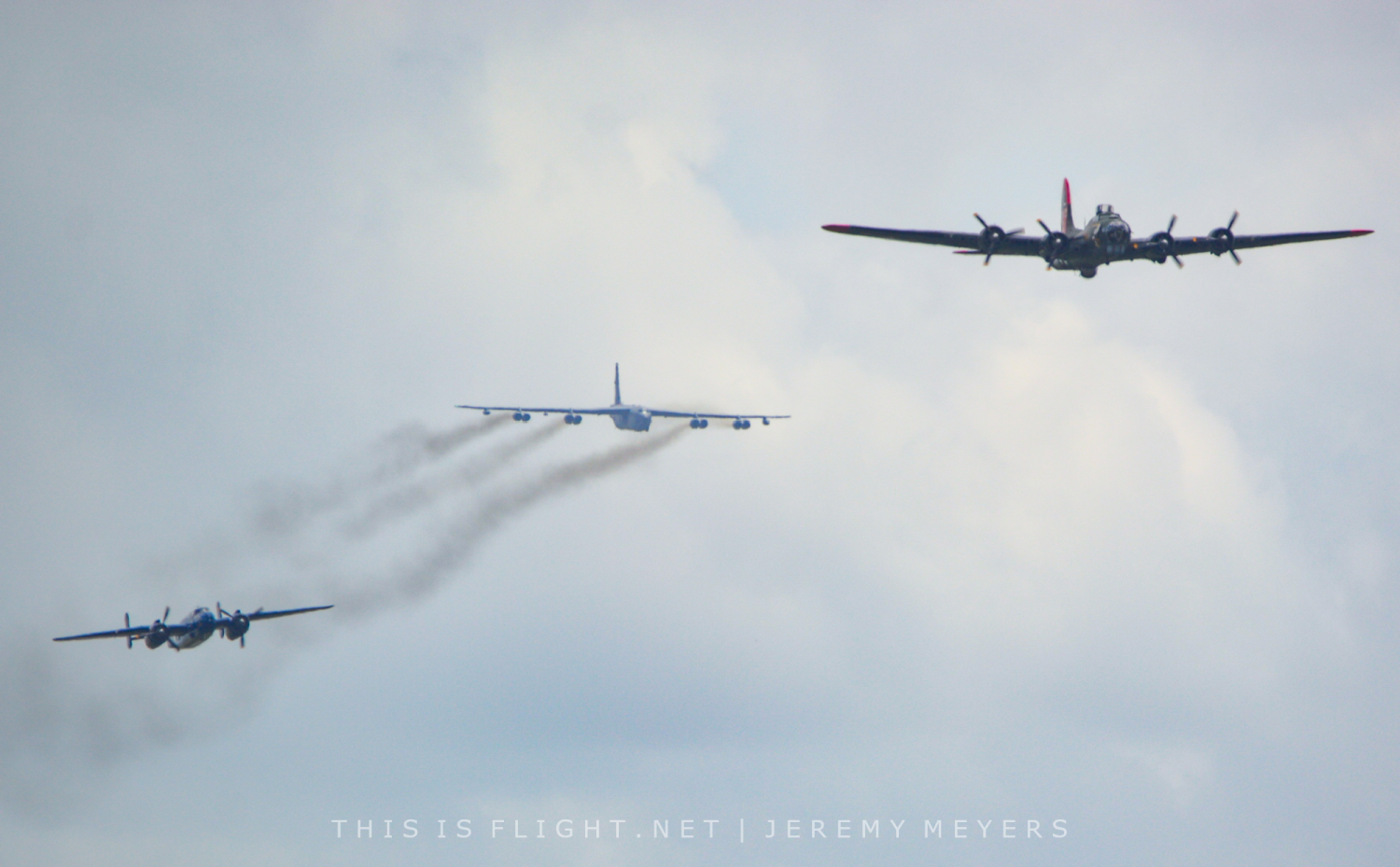 As the flying display entered its final phase, Bill Stein and Rob Holland performed their individual solo routines, as well as a second race with Shockwave, before handing the airspace over to the Thunderbirds. This was only the second time I had seen the new ground routine and it definitely felt shorter than in previous years. The biggest change is that the two soloists take off in section, much like the Blue Angels, which provides some amazing photo opportunities – although I remain on the fence on the matter. The cloud base held the team to a rolling show. 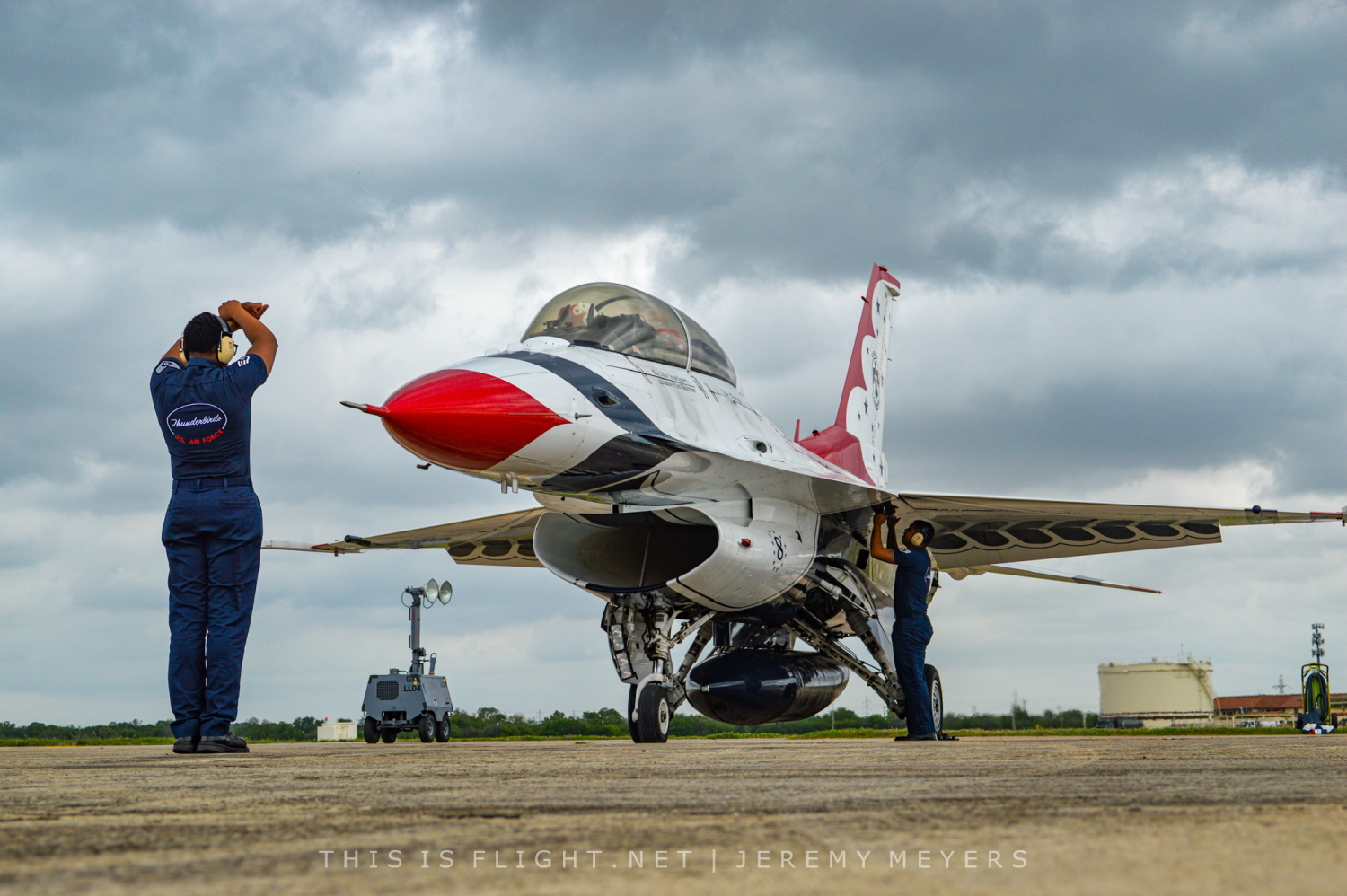 Aside from the impressive air display line up, the static display could well have taken up a day to view on its own. In many ways, it was the best airshow I have visited in some time.