Following the mass celebration of the Royal Air Force’s centenary at last year’s show, The RAF Cosford Airshow 2019 took a more familiar format, with the return of civilian aerobatic displays and considerably fewer static aircraft. From the very off-set, last year was intended to be a one-off affair, on a scale that is unlikely to be repeated anytime soon. The 2019 edition did, however, celebrate and commemorate a number of significant anniversaries and milestones in aviation, most notably the 70th anniversary of NATO, which attracted some rare and interesting participants. Although the build-up to the event was severely hampered by heavy rain, which proved burdensome for personnel constructing the showground, the weather remained dry throughout Sunday allowing for a full afternoon of aerial displays. 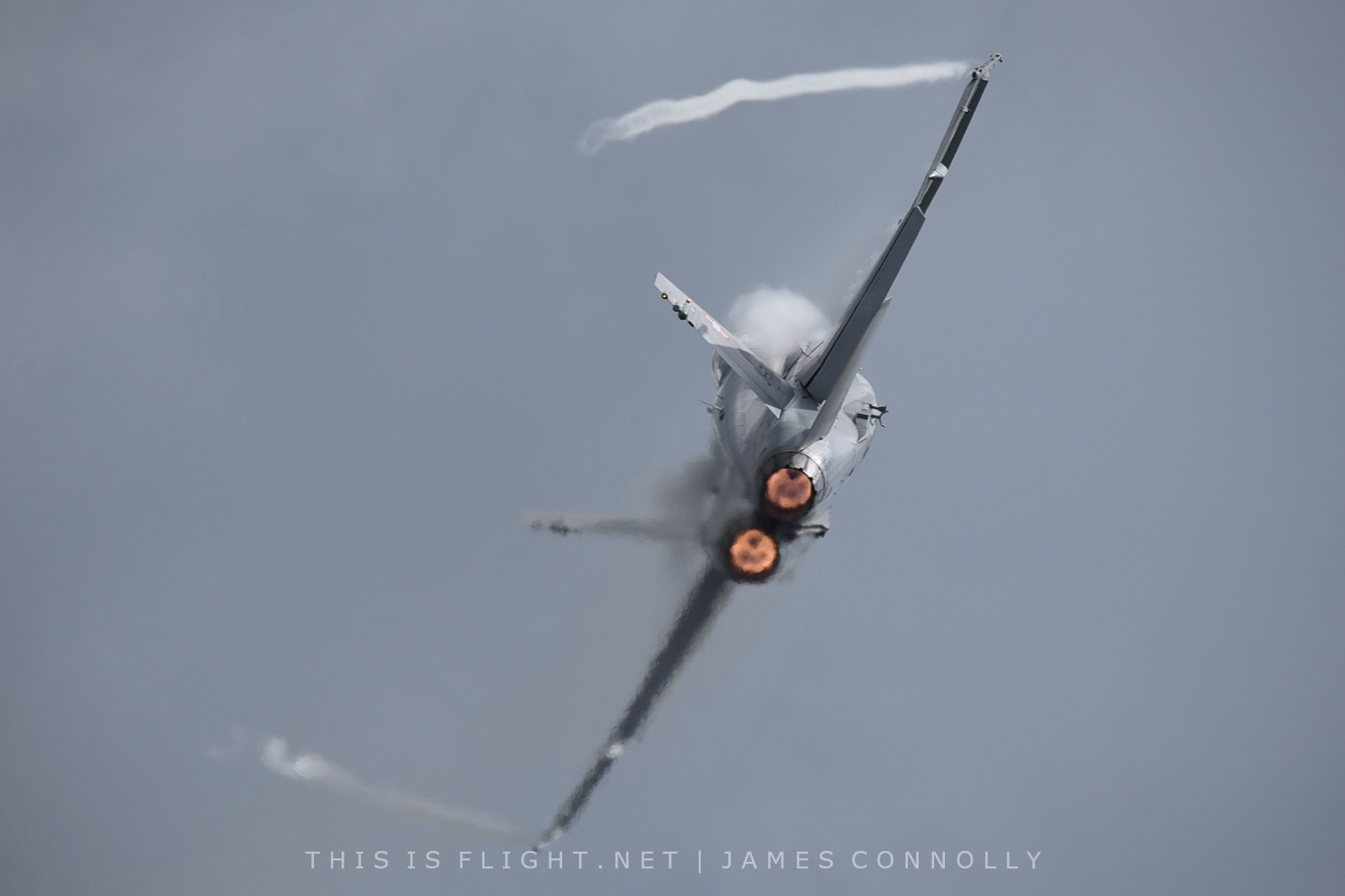 With this year’s primary theme in mind, it was no surprise that the show secured strong support from a plethora of visiting nations. The Swiss Air Force’s McDonnell Douglas F/A-18C Hornet made a thunderous return to Cosford, with Capitaine Nicolas ‘Vincent’ Rossier providing an energetic routine. The display, accompanied with an abundance of afterburner and tight turns, really showcases the aircraft’s exceptional manoeuvrability and performance. The German Navy also made an incredibly rare appearance in a UK flying display with a Lockheed P-3C Orion, stationed at Nordholz. Flown by a fully combat ready crew from Marinefliegergeschwader 3, otherwise known as ‘Crew 6’, the Maritime Patrol Aircraft demonstrated its unique reconnaissance capabilities with an impressive routine. From Denmark, the Danish Baby Blue Display Team made their Cosford Airshow debut, giving an admirable display with their five SAAB T-17 Supporter training aircraft. On the ground, international participants included a French Air Force SOCATA TBM700, an Irish Air Corps Pilatus PC-9M, and a German Navy Westland Sea Lynx Mk88. 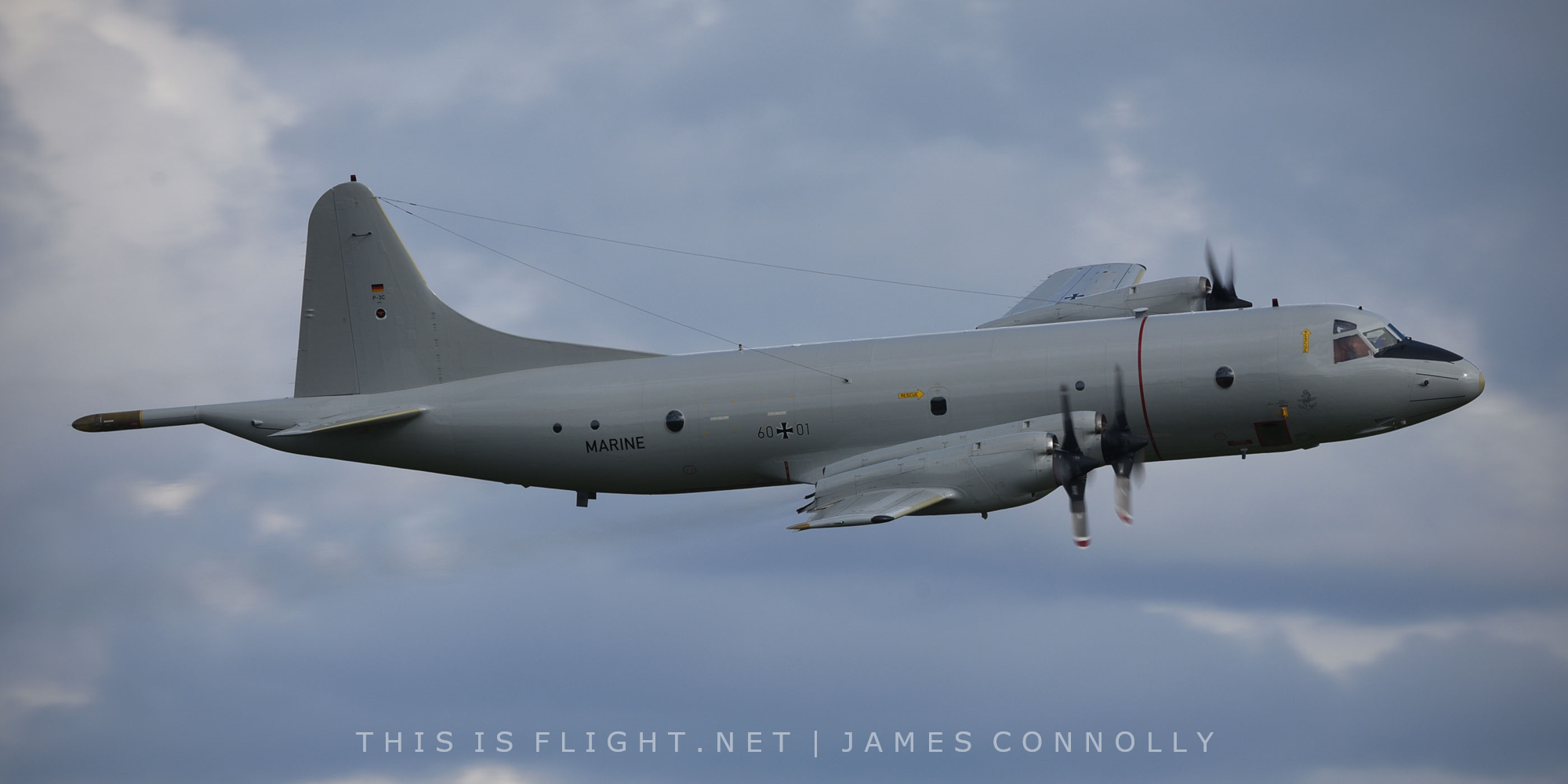 The show also explored RAF Cosford’s somewhat forgotten history, and the role it played during the Second World War. In 1940, the Shropshire airfield served as a depot for Czechoslovak personnel prior to joining Royal Air Force squadrons, and it was particularly poignant therefore, that the show received participants from both the Czech and Slovak Air Forces. Making their only scheduled appearance at a UK airshow this year, the Czech Air Force made a welcome contribution to Cosford Airshow with two displays. A pair of Aero Vodochody L-159A ALCAs joined ARCo’s Supermarine Spitfire PRXI in a unique and memorable flypast, before the two aircraft gave an explosive tactical demonstration, packed with aggressive manoeuvres and ground pyrotechnics. The Czechs closed the show with a superb demonstration by a SAAB JAS-39C Gripen from 211 Squadron, adorned in its rather patriotic tiger scheme. Meanwhile, the Slovak Air Force’s effort to support the show must also be commended, with the air arm providing a static example of a Let L410UVP Turbolet. 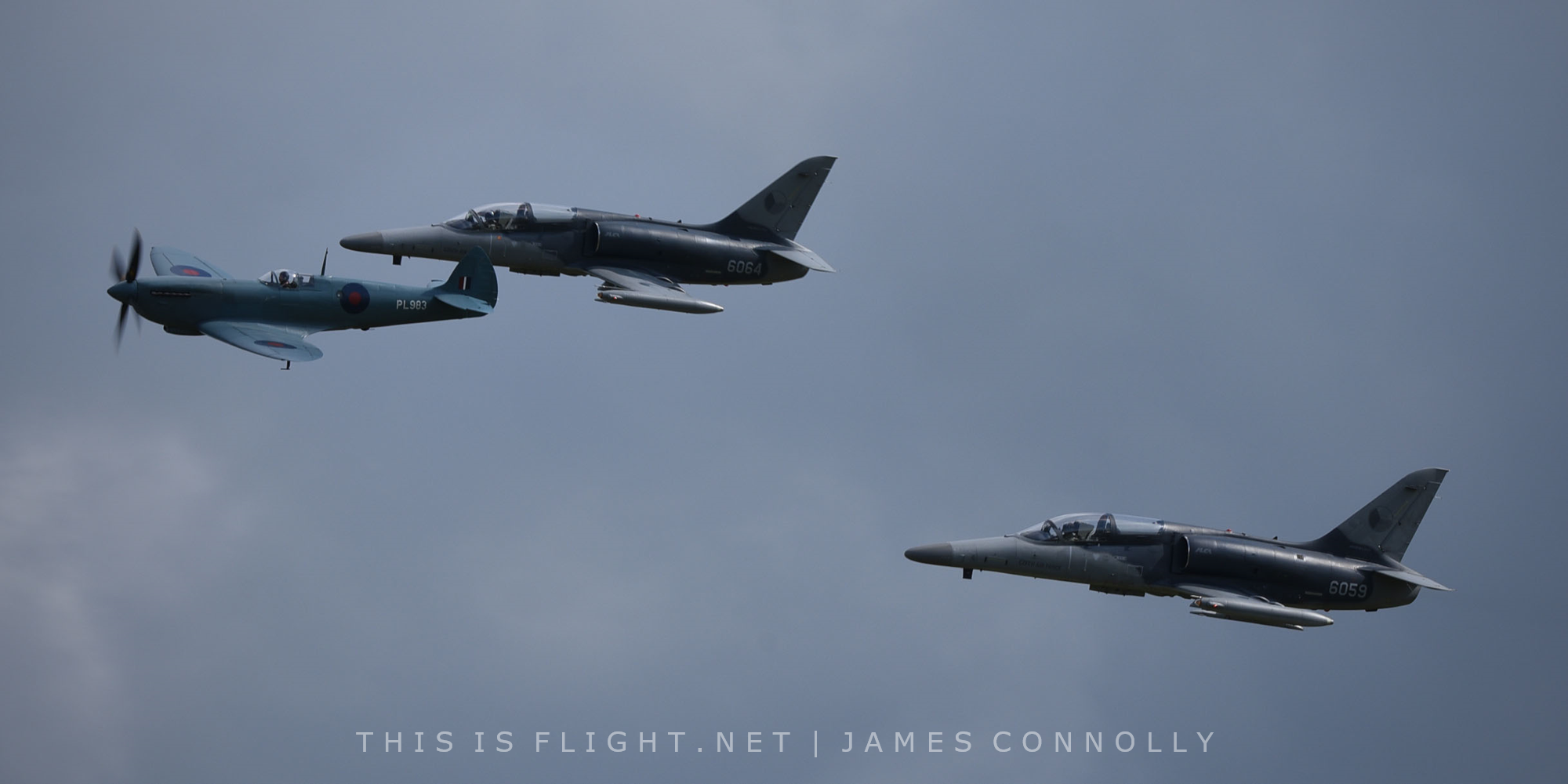 This year’s static park also paid homage to a number of iconic aircraft types, including 50 years since the Harrier entered Royal Air Force service. One example, a BAe VAAC Harrier T4, received particular attention, with the aircraft sporting special anniversary markings and the name of the late Harrier test pilot John Farley underneath its canopy. The aircraft, which played a significant role in the development of the brand-new F-35B Lightning II, is soon to depart for its new home under the ownership of Jet Art. Cosford 2019 also celebrated the 65th Anniversary of the Jet Provost family, with noteworthy examples both in the air and on the ground. The theme was represented in the flying display with a well-choreographed routine from a BAC Strikemaster Mk82a, Jet Provost T5 and Jet Provost T3; the latter variant resplendent in its Red Pelican scheme. 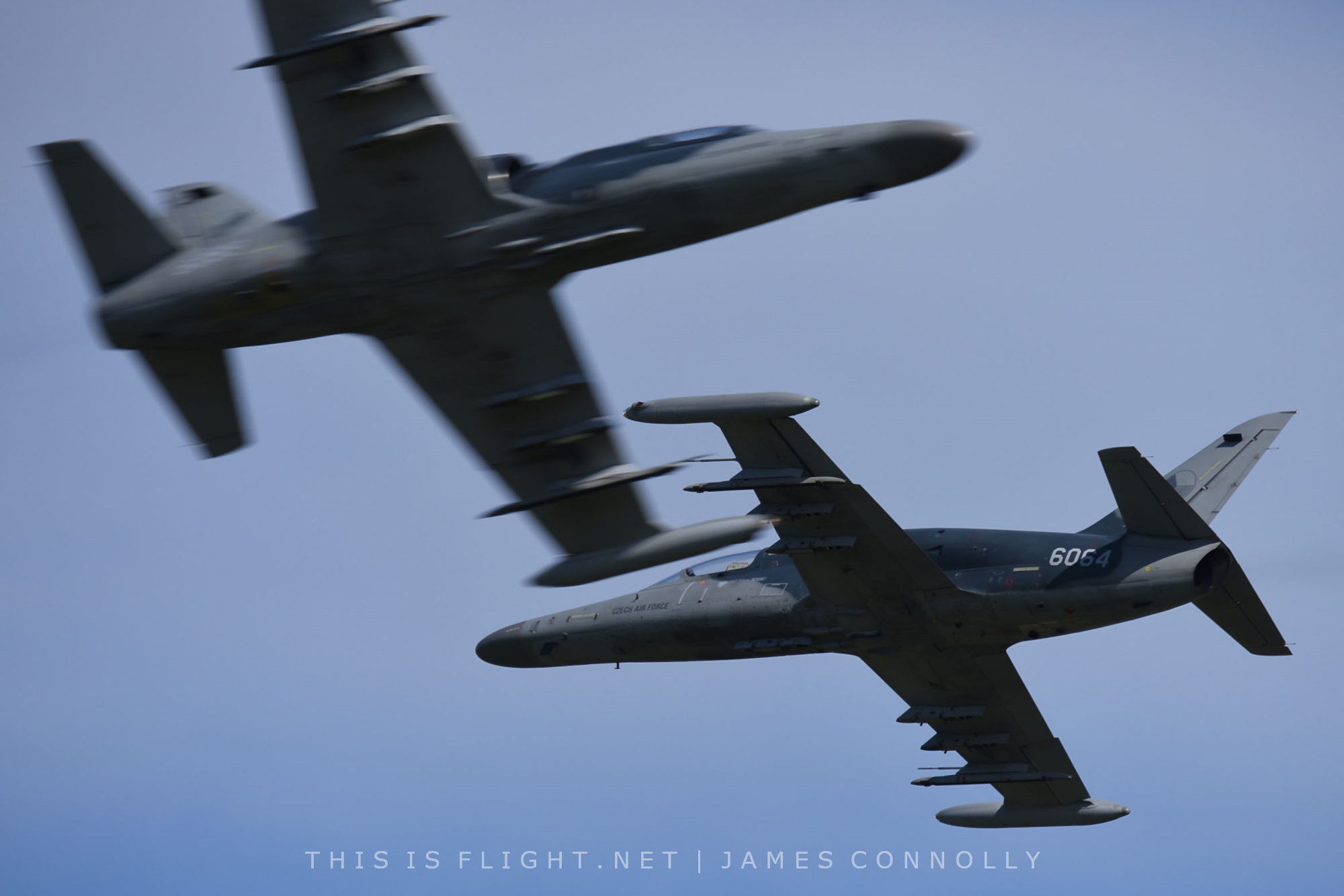 As expected, the show’s flying display featured all of the Royal Air Force’s display assets. In traditional Cosford Airshow fashion, the programme was opened by the RAF Falcons Parachute Display Team, soon followed by spirited performances from the Grob Tutor T1 and Shorts Tucano T1. This certainly contradicted the distant, and somewhat uninspiring display from the Eurofighter Typhoon FGR4, which was really overshadowed by the more dynamic international fast jet demonstrations. A break in the cloud base enabled the RAF Red Arrows to perform a full display, whilst the Battle of Britain Memorial Flight’s Avro Lancaster B1 made its first public appearance of the season, alongside a Supermarine Spitfire PRXIX and Spitfire IX.  Despite these displays, the Royal Air Force’s overall support towards their only remaining airshow appeared rather weak, with no further contributions in the flying display. The junior service has shown a rather reluctant attitude towards flying display participation in recent years, and with no flypasts from a transport aircraft, this was certainly apparent. 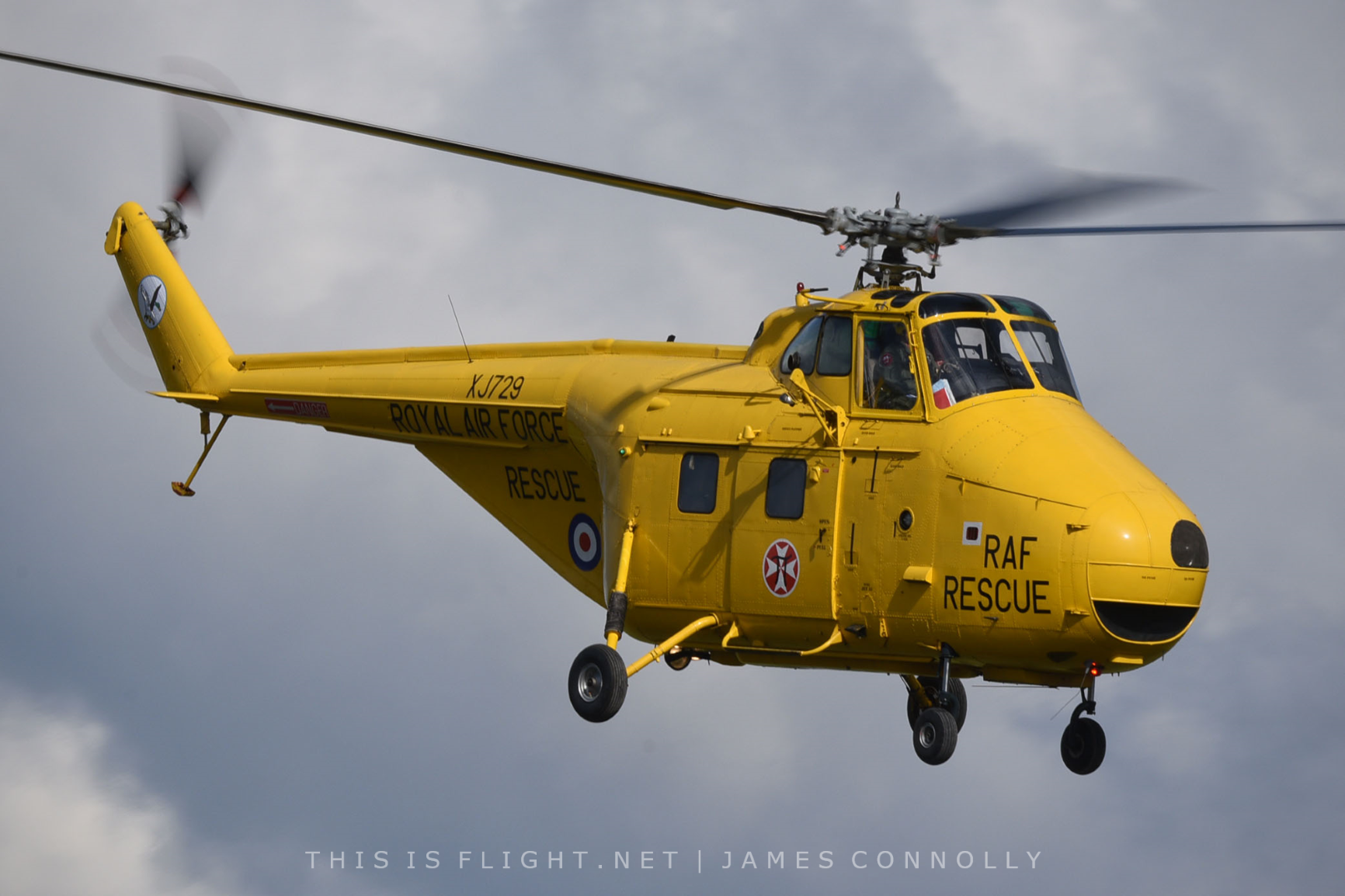 Cosford Airshow has always featured a heavy presence from rotary-wing aircraft, and 2019 was no different. Returning to the show for a second consecutive year, the Belgian Air Component continued their tremendous support towards the show with a display from their Agusta A109BAi.  Displays from both the Army Air Corps’ AgustaWestland WAH-64D Apache AH1 and the Royal Air Force’s Boeing Chinook HC6A proved to be crowd-favourites as ever, whilst a classic rotary type in the unique shape of Historic Helicopter’s Westland Whirlwind HAR10, made a pleasant and unexpected appearance in the late-afternoon. A number of civilian aerobatic performances, including a pairs display from the Global Stars, a Pitts S-1S Special and a rare Rihn DR-107 One Design, also added a change of pace to the afternoon’s programme. Meanwhile, the Vintage Pair, comprised of two de Havilland Chipmunk T10s, made one of their first public appearances on the airshow circuit, providing some elegant and well-executed formation flying. 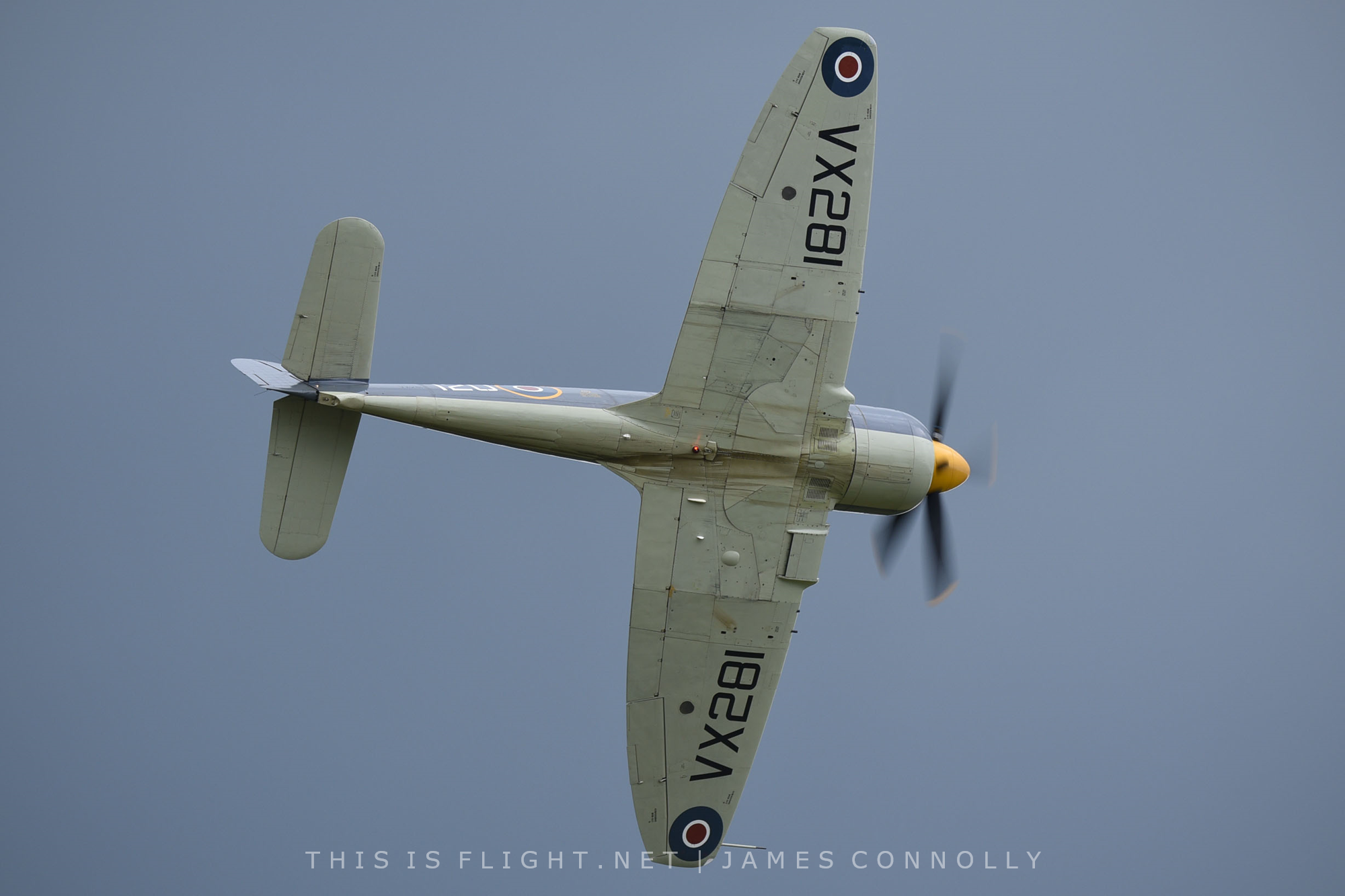 To coincide with the 80th anniversary of the establishment of the Women’s Royal Auxiliary Air Force (WRAAF), this year’s show placed a significant emphasis on commemorating women in aviation in a number of ways. In the air, Sue Girdler gave an enjoyable display in her Boeing Stearman A75-N25-4 Kaydet, whilst a de Havilland DH89a Dragon Rapide represented the role of the Air Transport Auxiliary (ATA) during the Second World War. In a surprise addition to the flying display, Bygone Aviation Ltd.’s Hawker Hurricane Mk.1 and Anglia Aircraft Restorations’ Hispano HA1112-M1L Buchon performed an impressive dogfight scenario, complete with pyrotechnics, to demonstrate the dangers faced by ATA pilots. It was hoped that a Fairchild Argus would accompany the two fighters during the set-piece, portraying an ATA ferry flight under attack from the Buchon, but alas, the aircraft was unserviceable. The graceful sight and sound of Robert Tyrell’s North American P-51D Mustang ‘Miss Helen’ and Navy Wings’ Hawker Sea Fury T20 also accompanied the afternoon’s flying display.

The significant quantity of foreign participation at this year’s event really demonstrates how the RAF Cosford Airshow has grown from strength to strength in recent years. The Royal Air Force’s only remaining airshow delivered another impressive spectacle, attracting some real rarities that are unlikely to be seen at any other UK airshow this summer. The RAF100 celebrations in 2018 have clearly played a significant part in the developing reputation of the event, and I hope that the organisers can build on this legacy in years to come.