The second Oregon International Airshow of 2022 took place over the weekend of 20-21 August. Although held at McMinnville – a considerably smaller show site than their June event in Hillsboro – the organizers were able to pack in a good mix of aircraft, although some of the military performers operated from off-site. 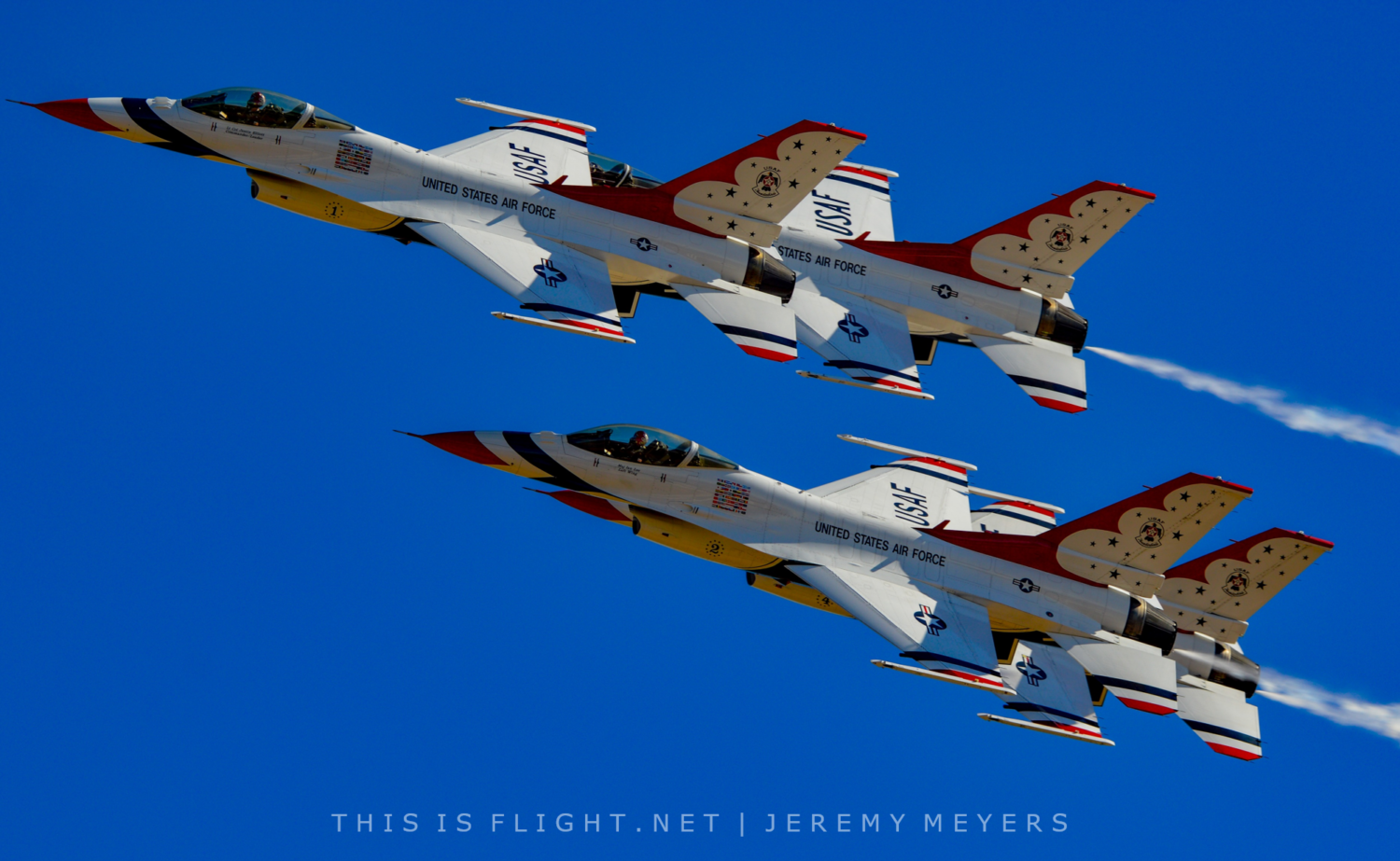 Due to the ramp size being limited, the static display was made up of just four aircraft: an Erickson Aircraft Collection B-17 “Ye Olde Pub”, PBY-5A Catalina “Princess of the Stars, a US Army CH-47F and a a Royal Canadian Air Force CT-156 Harvard II from 15 Wing at Moose Jaw made up the entire static display. Even so, the area was packed with a large verity of vendors and places to eat, simulators and booths to meet some of the pilots. 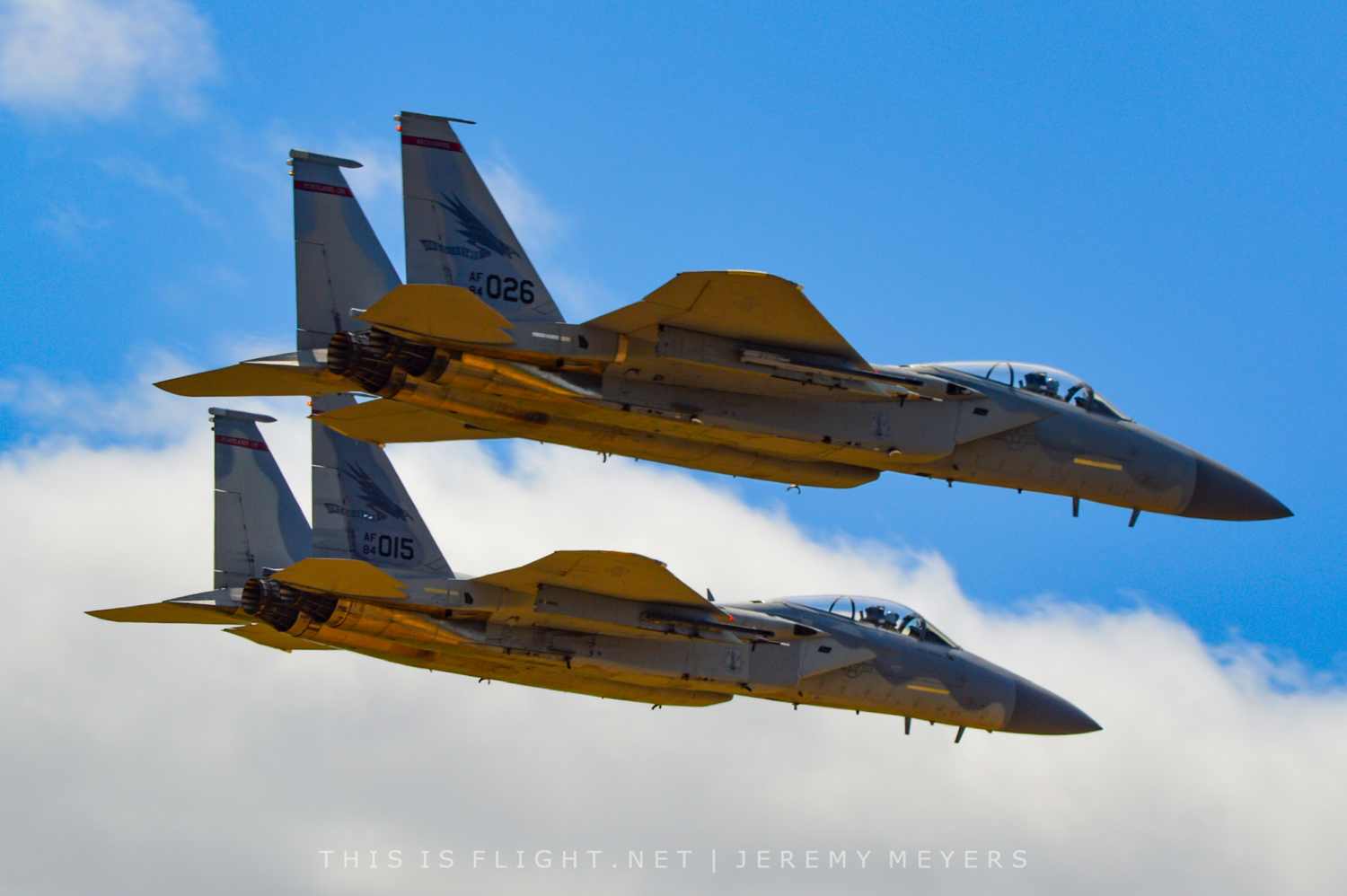 In fact, the showground was so packed that there was not a single spot on the crowdline for those who had not purchased a reserved seat or access to the photo pit. This made photographing some acts very difficult, especially the race between the L-39 and jet truck. The reserved seating wasn’t perfect either, with several complaints that reserved tables in the Beer Garden and Family Garden were not clearly marked, leading to people sitting in the wrong places. 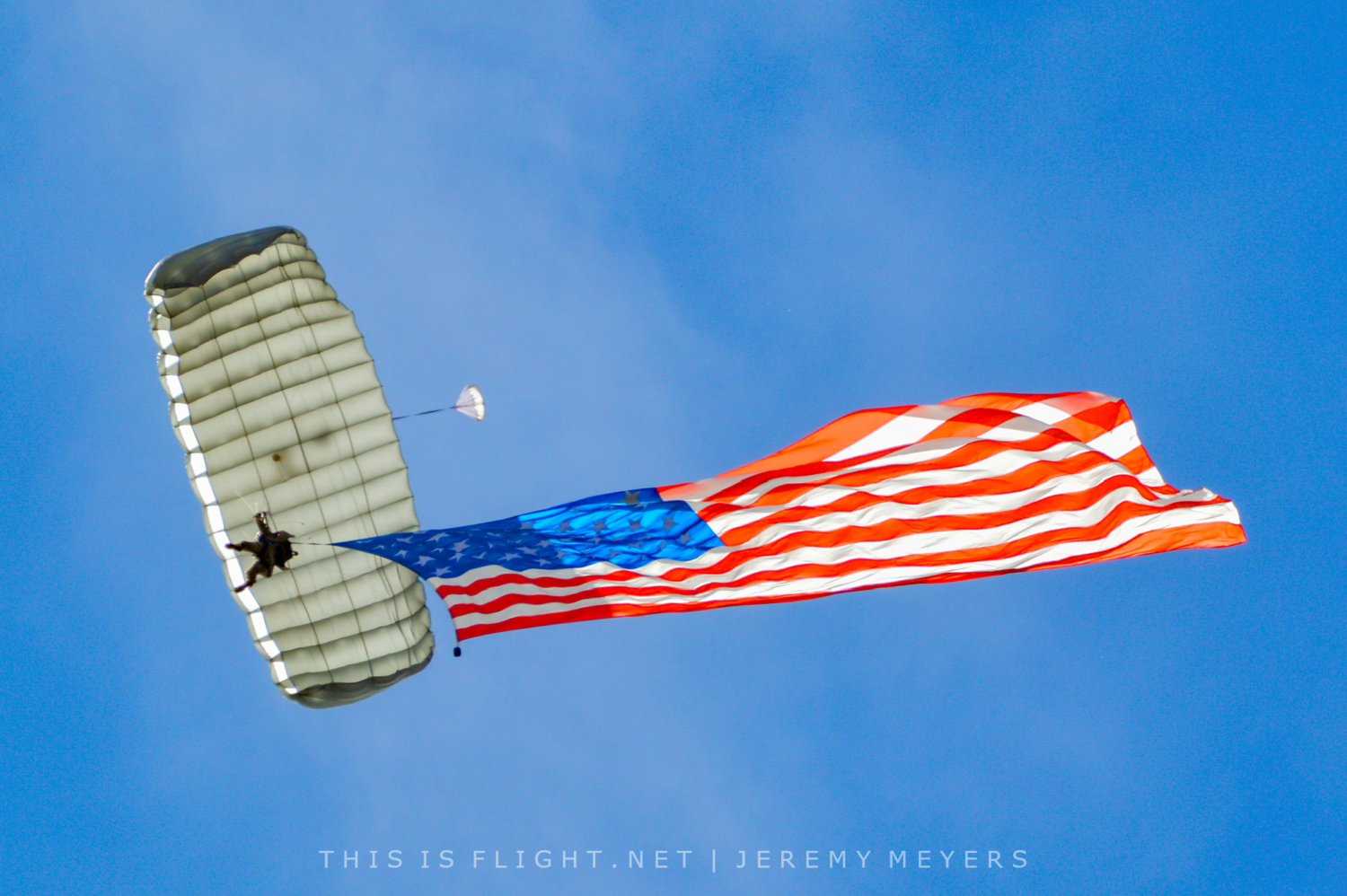 The flying display kicked off with a jump by an Oregon ANG parachute unit bringing in the flag, jumping from a Joint Base Lewis McChord CH-47F Chinook. This was followed by two F-15C Eagles from the local 142nd Fighter Wing working the pattern, with multiple high-speed passes and a couple of formation passes as well. 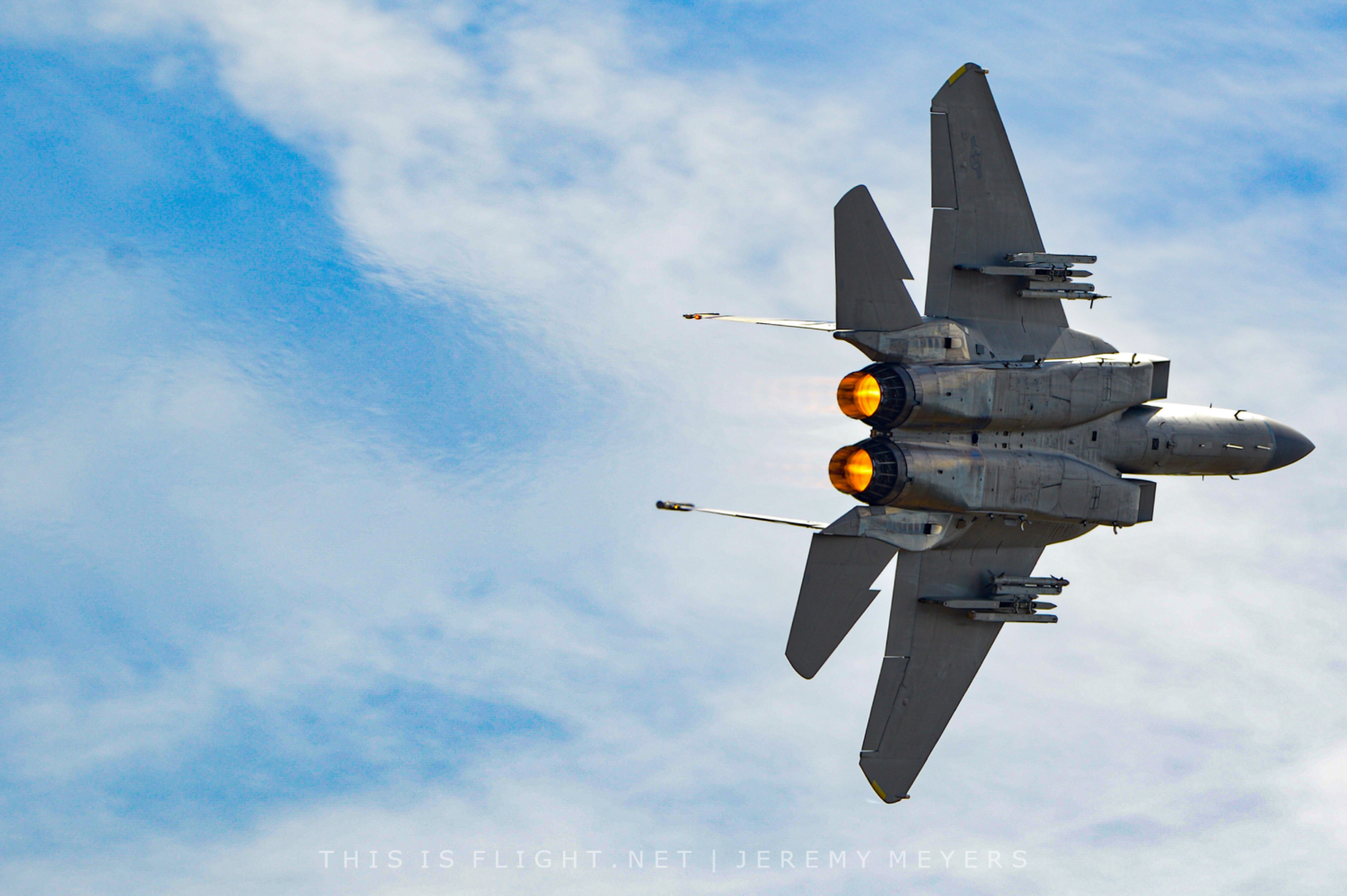 Following that, the show transitioned to a series of civilian acts, starting with Renny Price in his Su-29. His routine is perhaps not as dynamic at other solo aerobatic performances, lacking maneuvers such as snap rolls, but did showcase elements of the aircraft’s maneuverability. Without missing a beat, Kent Pietsch then entered the aerobatic box in his Interstate Cadet, having departed to the hold earlier, and flew his award-winning comedy routine. This is a well-polished routine of near misses and erratic flying, with the aircraft dropping items like a tire, toilet paper and even an aileron. 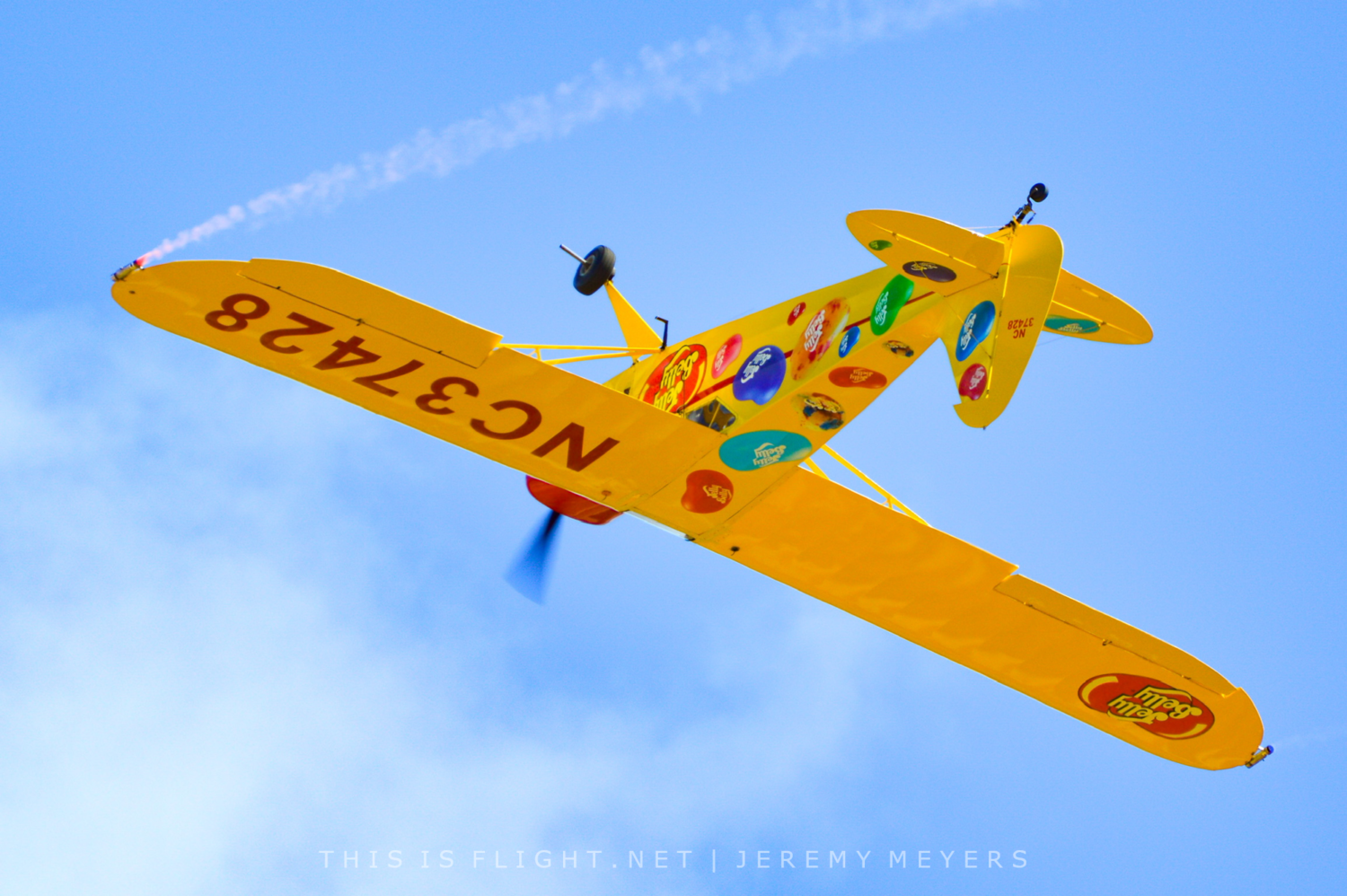 Not to be outdone, Jerry Kerby then flew in a modified L-39C Albatross as a part of the Team 11 racing. One of the most notable differences compared to the standard L-39C is that, similar to the L-39NG variant, there are no tip tanks on the wings. Before landing, he raced the next performer, Hayden Proffitt II in a 57 Chevrolet jet truck, with the truck winning on Saturday and the L-39 winning on Sunday. 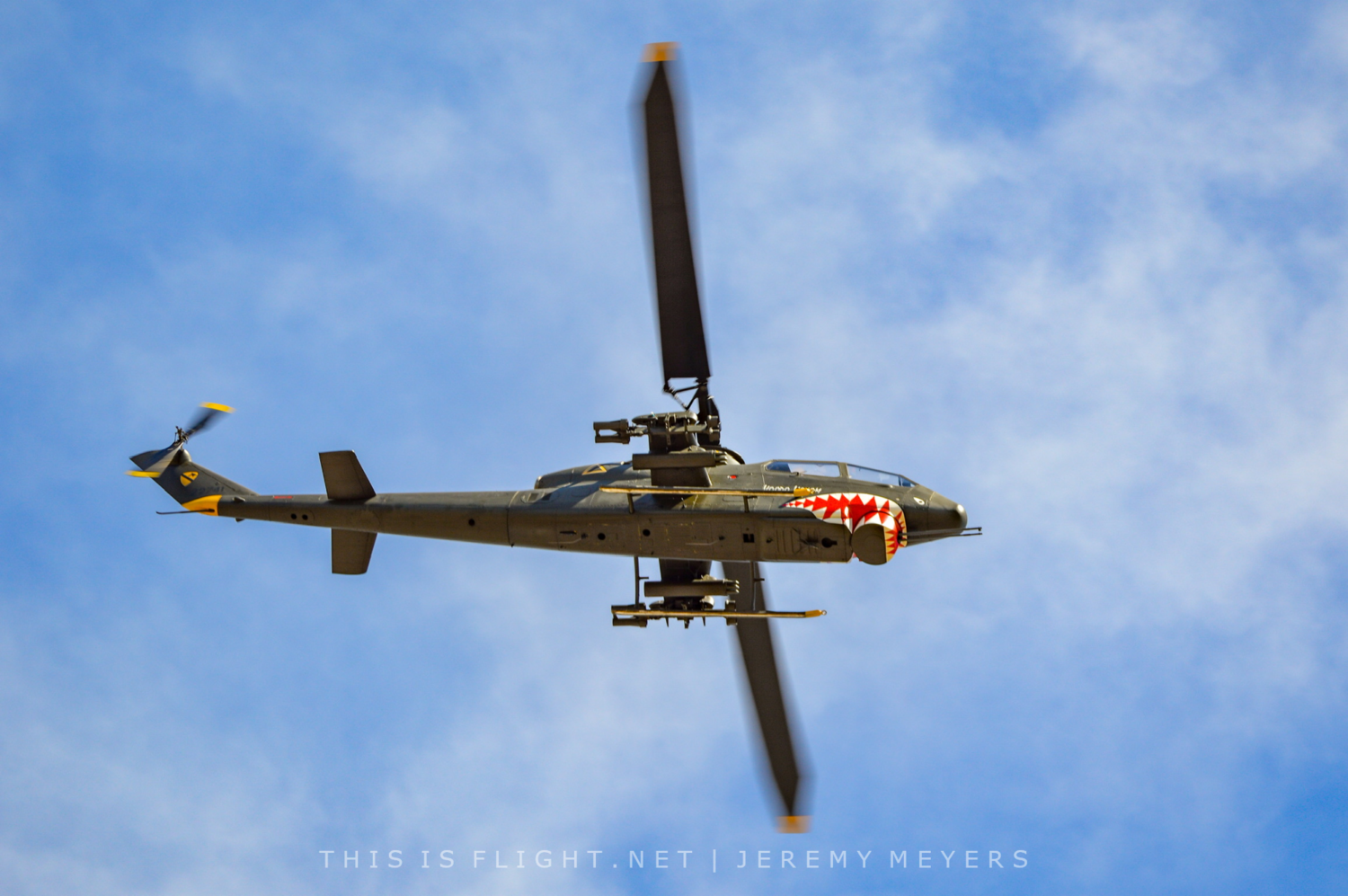 The next segment started off with the Olympic Flight Museum’s AH-1 Cobra and UH-1 Huey, which made several passes in formation as well as hover work and a demonstration of the Cobra’s agility. This was in addition to some wonderful commentary on the history of Bell company and the Vietnam-era uses for both aircraft types. Then, the Erickson Aircraft Collection launched their F8F Bearcat and AD-4H Skyraider for a sequence of low passes and photo passes. 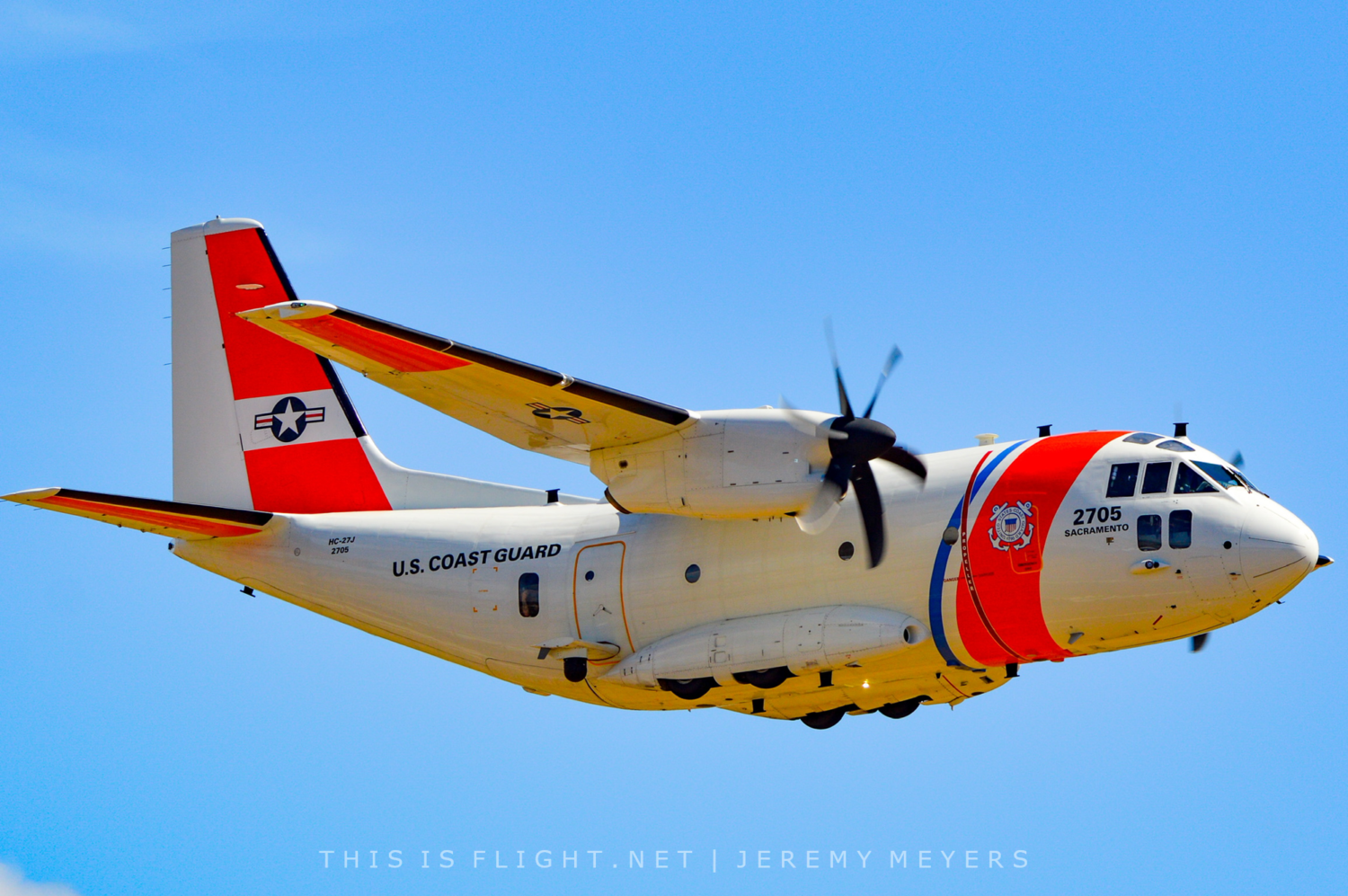 A particularly welcome sight, due to the fact there are just 14 in service, was a single HC-27J Spartan from US Coast Guard Air Station Sacramento, which made three low passes on the Saturday. Sadly, Sunday’s flypasts were cancelled due to operational commitments. Following this, Kent Pietsch returned for his trucktop landing routine before a second very rare performer entered the aerobatic box: Mark Peterson in the A-37 Dragonfly, which is the only aircraft of its kind on the North American airshow circuit. Mark has added smokewinders to the wings for ease of following the aircraft through its maneuvers, and he does a great job of keeping the jet in front of the crowd. 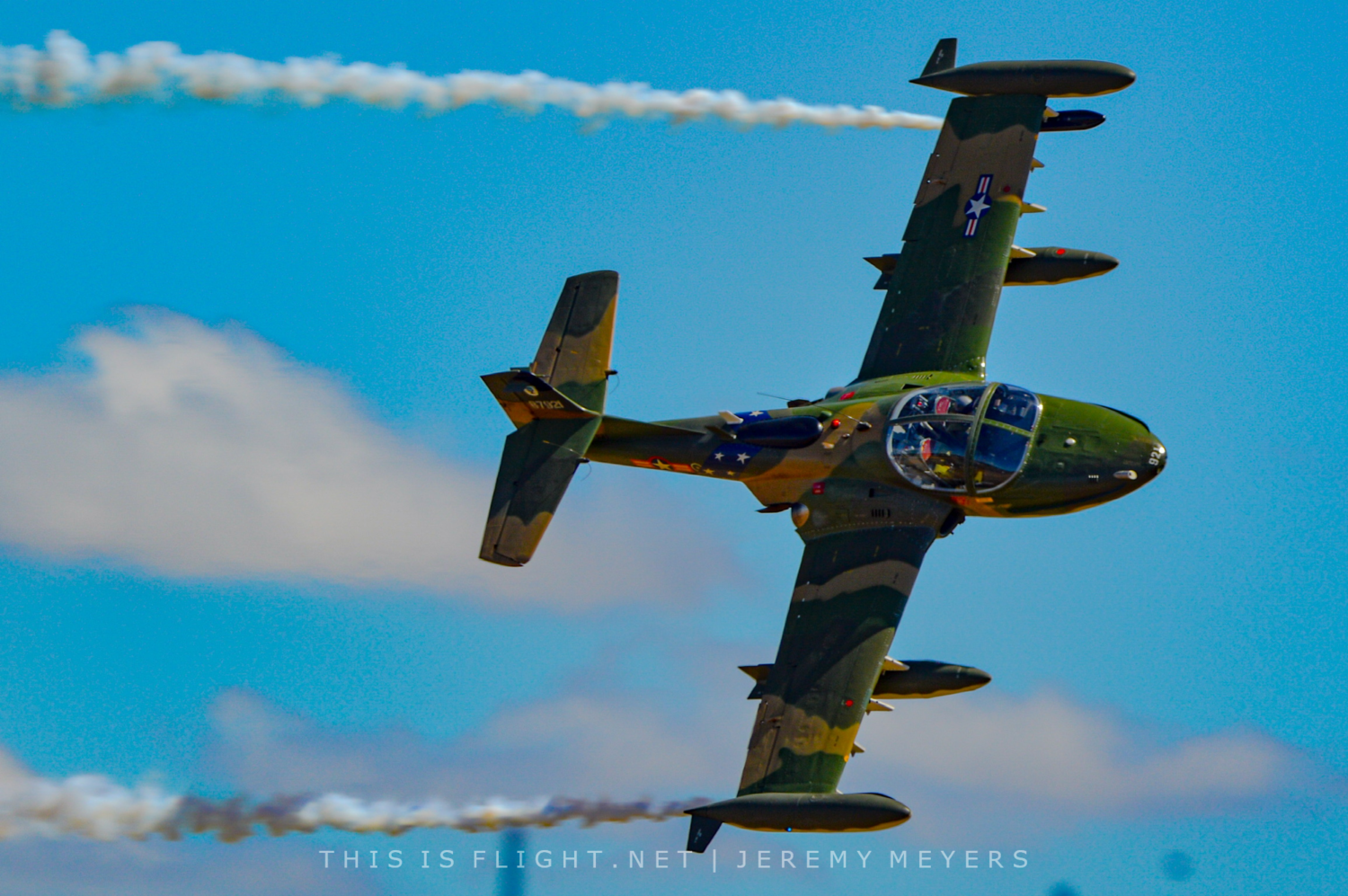 Next, enter the modern military. Greg Anders took off first in P-51D “Val Halla”, performing one photo pass and then departing to the hold. This cleared the way for the US Air Force’s F-35A demonstration to take the stage, arriving from Portland International Airport. The opening pass from the F-35 gave a hint of the amount of vapor condensation that would be present, and it was a very welcomed sight as the crowd was equally as awed by the jet, routine and the vapor during many of the passes. Having completed the solo demonstration profile, the F-35 joined up with the Mustang for the Air Force Heritage flight, followed by three bonus passes from the F-35: a high-speed pass, inverted pass and a tactical pitch. 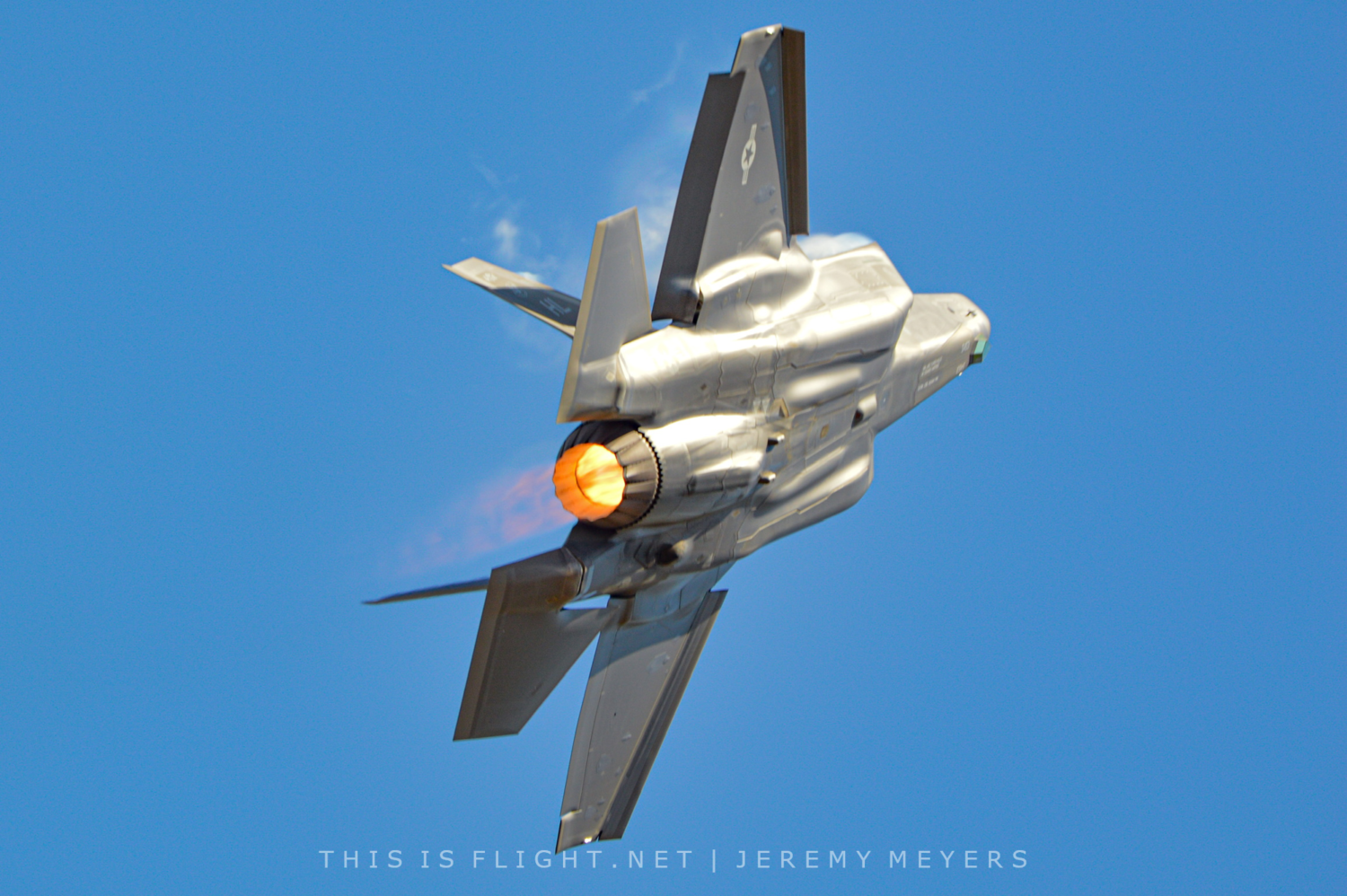 A change of pace followed as Bob Carlton flew his jet glider routine: a high energy routine with typical glider loops, rolls and stall turns, set to classical music, before lower altitude manoeuvres using the jet engine, accompanied by more modern music. Next up were two passes by an Air Force Reserve crew in a C-17A Globemaster III, and the third and final display of the day by Kent Pietsch, flying his deadstick routine and landing the aircraft with the engine off. The show announcer, Rob Reider, was able to stand out on the airfield and hold out his hand to mark the point the aircraft would stop. To close the show, the AF Thunderbirds took over the airspace and flew what seemed to be the closest performance I have seen in some time. 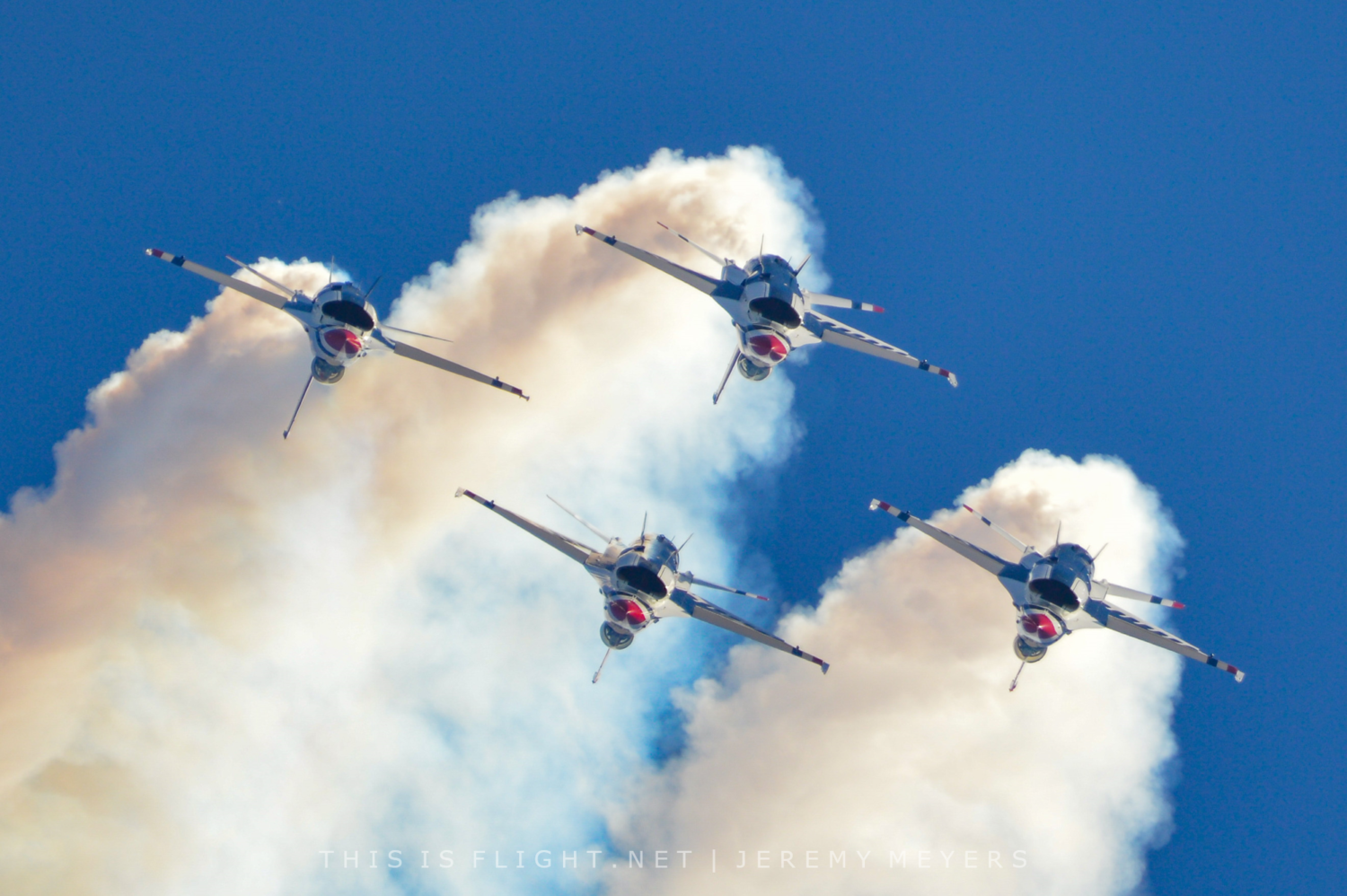 On-site parking, although expensive (between $35 and 50 per day), was well organized and carefully planned; it took less than ten minutes to get off the airfield after the show. However, this made for an expensive day, with admission starting at $35 for the main weekend show, and the cheapest crowdline seats costing an additional $45. Free off-site parking could also be reserved at Chemeketa College, with buses provided from there to the showground.

The Oregon International Airshow will return to McMinnville in October 2023 and is slated to feature the US Navy Blue Angels. Those planning to attend should also plan time to visit the Evergreen Air Museum, just outside the airfield, which is the home of the giant Howard Hughes Spruce Goose, among other air and space artifacts and displays.