Few events in history have been as decisive in determining the fate of much of the Western World, as the 6th of June 1944: D-Day. The airborne and amphibious landings in Normandy that summer marked a turning point in the war against Nazi Germany; had they failed, few dispute that the greatest conflict in history would have dragged on for a great many years, and perhaps the liberation of Occupied Europe might never have been. It was fitting, therefore, that the airborne contingent, which comprised the opening phase of D-Day, be marked on its 75th anniversary with a gathering of the greatest number of wartime Dakotas that has been seen in the post-War era. 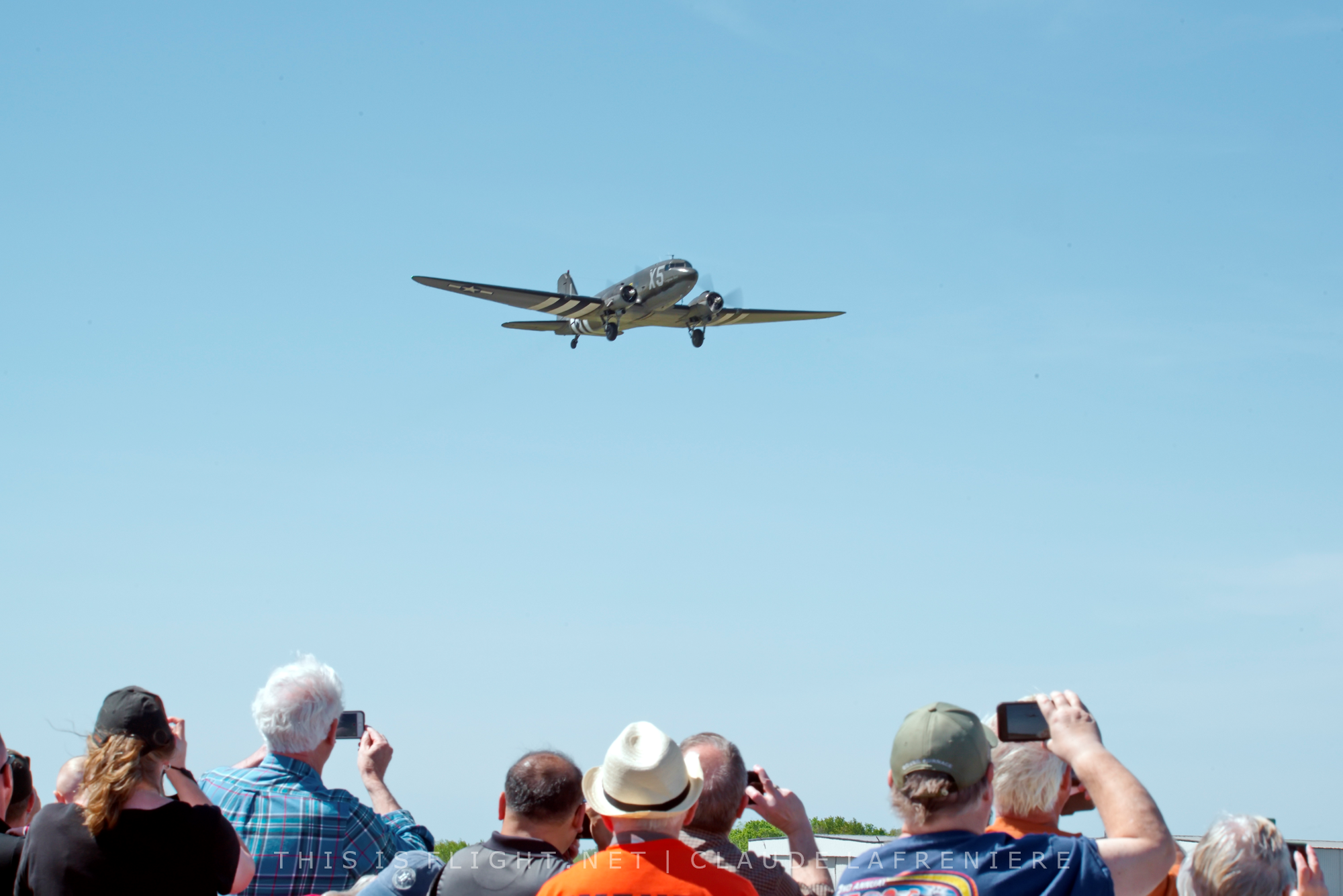 15 US-based Dakotas departed in late May, forming the independent ‘D-Day Squadron’, which followed the North Atlantic route to the UK. This took the Squadron via Oxford, Connecticut; Goose Bay, Canada; Narsarsuaq, Greenland; Reykjavik, Iceland; and Prestwick, Scotland, before finally arriving at the Imperial War Museum, on the site of former RAF Duxford. The route was developed by the Air Transport Command to provide the Allied forces in Europe with aircraft built in the US, and this monumental journey proved exceptionally well organised by the US team, marking the official start of the Daks over Normandy celebrations. 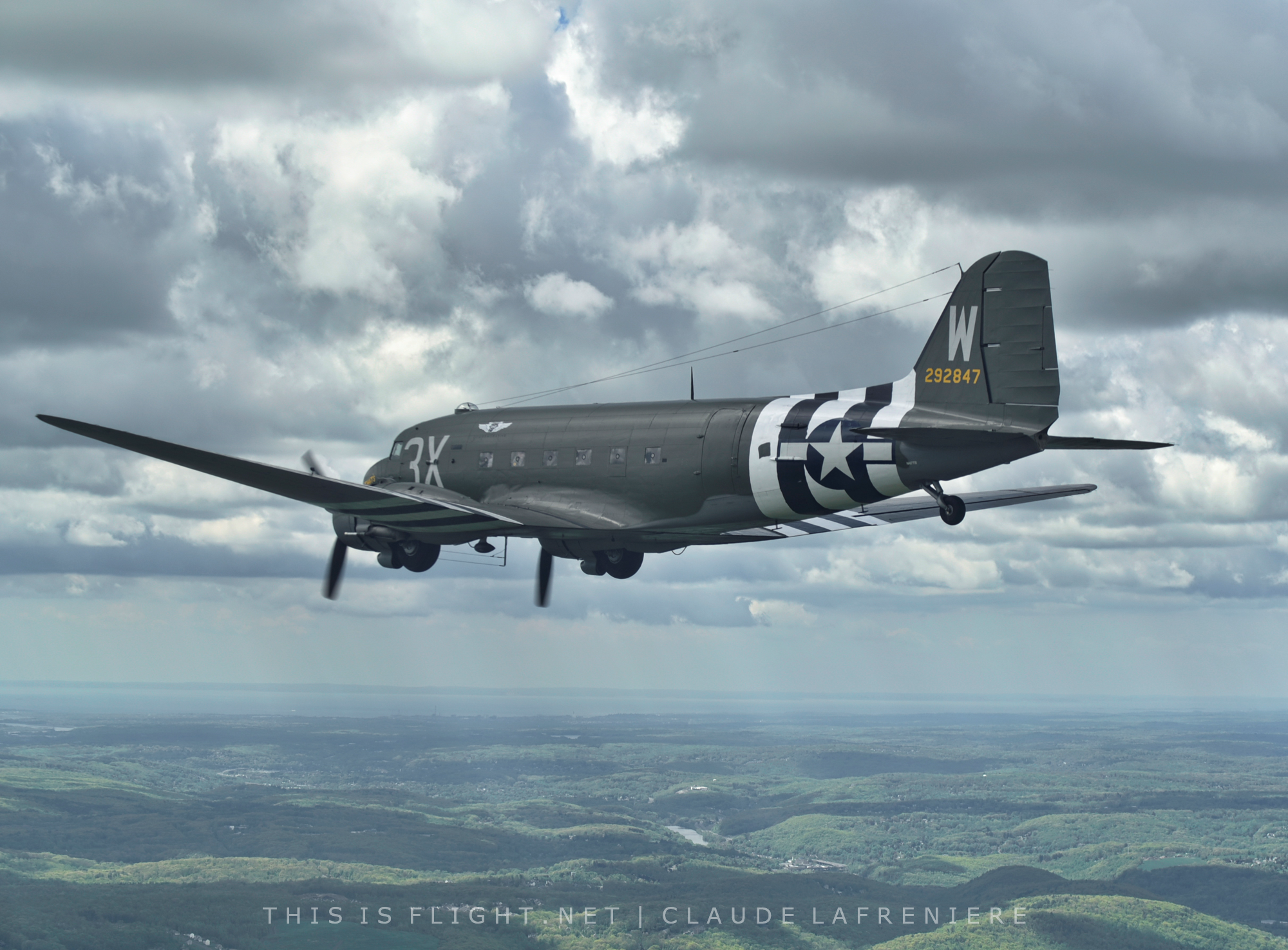 The ticketed events at Duxford were to be held between the 3rd and 5th of June, before all airworthy Dakotas would depart for France, in a mass formation of the kind seen exactly 75 years earlier. Over three days, the Daks over Duxford event saw various activities organised, however poor weather was given as the reason for formation parachute drops being cancelled in the days prior to departure. The author was present on only the final day, which would culminate in a massed departure of more than 20 aircraft.

During the event on the 5th of June, a number of pre-arranged air-to-air photo flights (consisting of Harvards and Beech 18s) departed just after my arrival, in formation with four Dakotas. Just after 11am, a formation flypast by the United States Air Force comprising of six MC-130J Hercules and six MV-22 Osprey aircraft passed overhead Duxford, in what proved to be one of the highlights of the three-day event. The unique sight and sounds will stay with me for a long time.

The following lull in proceedings saw numerous pleasure flights take place, with the Dragon Rapides of Duxford-based Classic Wings proving ever popular. The free time allowed visitors to wander the fence line, and view the assembled fleet of aircraft. 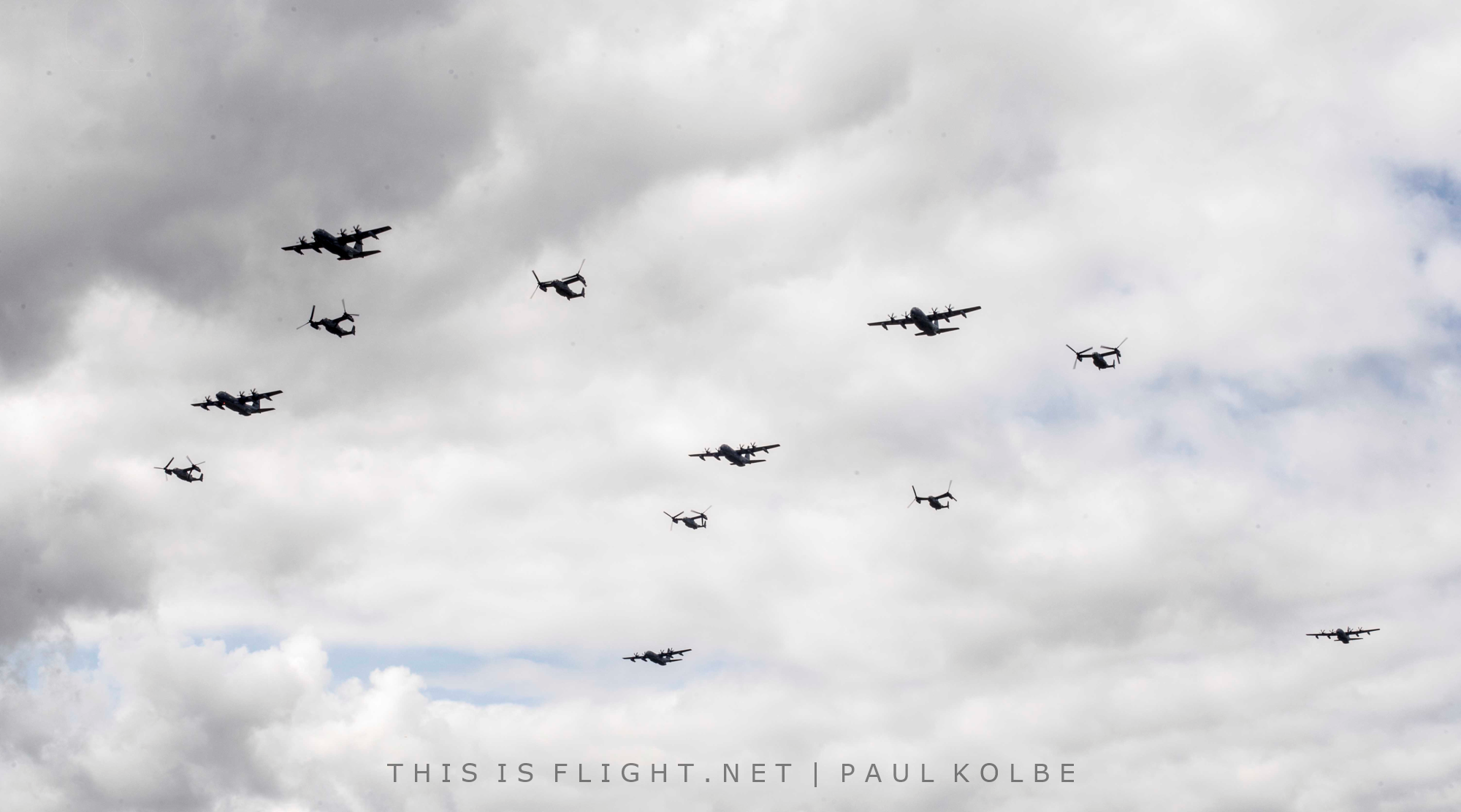 Though not marketed as an airshow as such, just after 2pm a number of UK-based warbirds were displayed; these included a P-47 Thunderbolt, Spitfire duo (single seat and two-seat), a Grumman Wildcat and a pair of Mustangs. The latter, along with two Beech 18s and three T-6s, would later escort the Dakotas on their flight to Normandy. The Spitfire pairs display was of particular note: suitably adorned with the distinctive D-Day ‘Invasion Stripes’, this was a display of formation aerobatics, executed with pinpoint precision.

The massed departure of Dakotas to Normandy, originally scheduled for 3pm, was delayed by more than 40 minutes, apparently due to a “VVIP” making the same crossing. Soon enough, however, period re-enactors were forming up to board the aircraft that would be dropping them over Normandy later in the day. 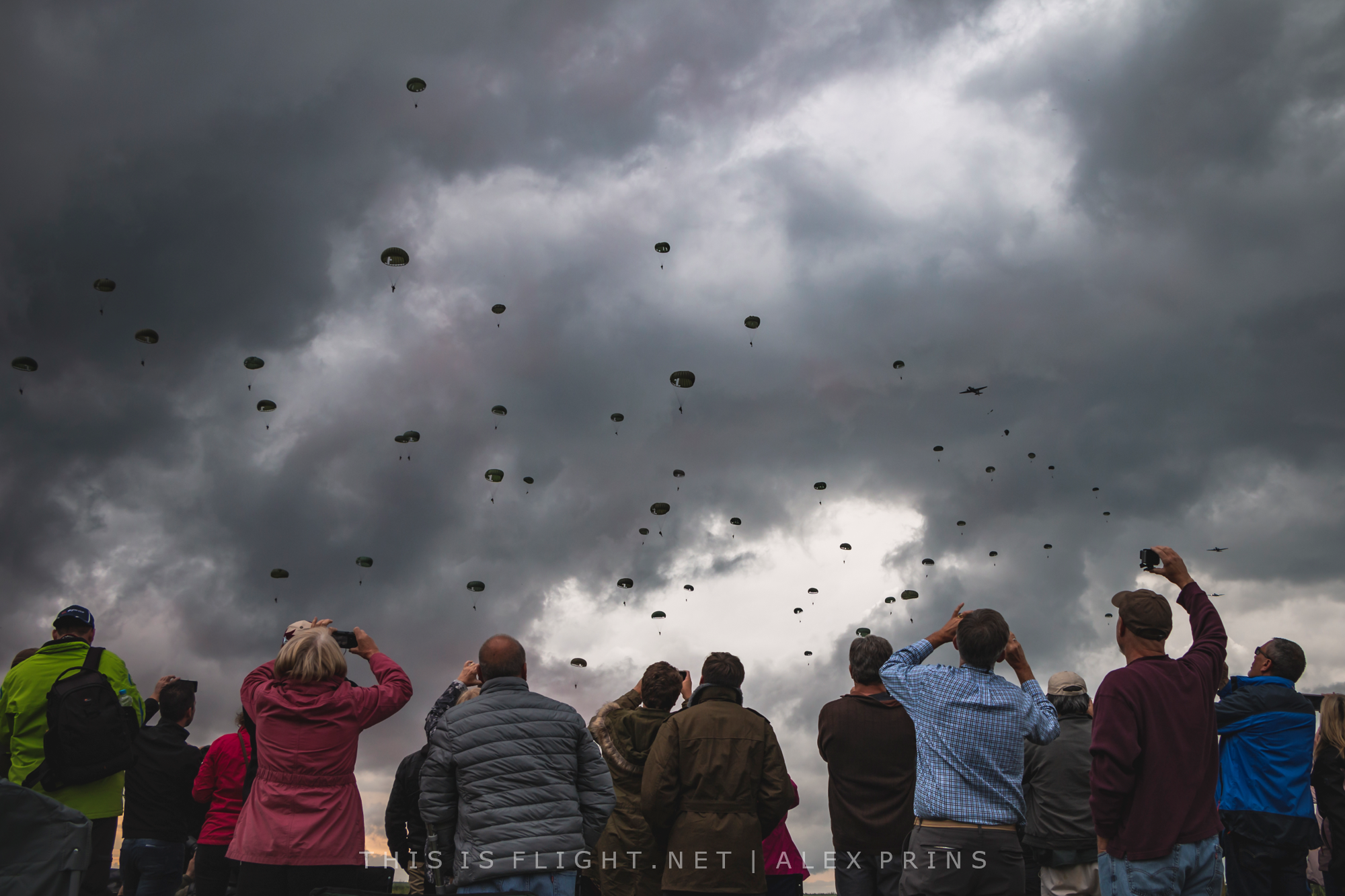 In Sannerville, Normandy, events were unfortunately far less well organised. Very little guidance was provided by the Daks over Normandy organisers, beyond a rough location on a satellite photo of ‘Drop Zone Kilo’ and its associated public viewing area. Organisation of parking and traffic management was left to the local French authorities, who proved to be woefully ill-prepared for the thousands of visitors that descended on the town. This author joined a queue of British cars in simply abandoning vehicles on pavements in a residential area, at the mercy of the authorities. Despite the aforementioned organised viewing area, no signs or associated staff were present to guide visitors to what was essentially a farmer’s field, demarcated by a single taped barrier.

Couple this with only a handful of mobile toilets and no PA system, and the public was left poorly catered for, totally clueless as to events across the Channel. On time at 2pm local, the assembled crowd was treated to an unexpected series of flypasts by a lone Spitfire. Seemingly unrestricted by separation distances, the elliptical-winged machine soared low directly overhead, and circled the spectator area at will. Yet no sooner had it arrived, than it was gone again, to be replaced soon after by the RAF BBMF’s Dakota, which made the first parachute drops into Sannerville. 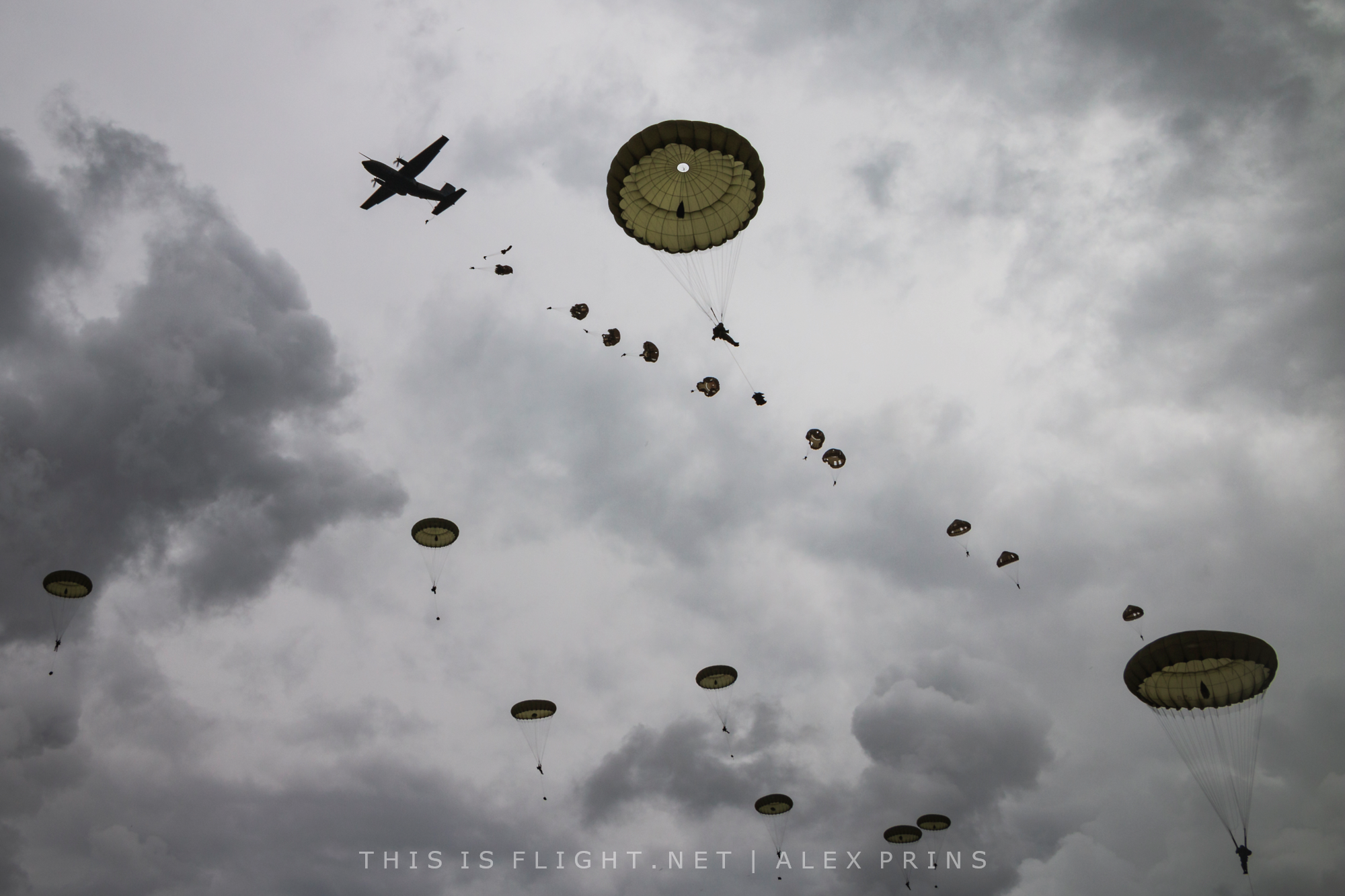 Soon afterwards, and the sky was filled with round ‘chutes, as 280 airborne troops were dropped in sticks by two RAF C-130 Hercules, an Armée de l’Air CASA CN-235 and a C-160 Transall. The event proved wildly popular and moving, despite several parachutists landing in amongst the crowd!

The extended wait preceding the massed parachute drop was not broadcast to those waiting, as members of the public took to social media to work out why no jumps had taken place at the scheduled time. With no other entertainment provided, a small marching band was called to perform encore after encore, with ‘It’s a Long Way to Tipperary’ played many times to rapturous applause.

Finally, the first aircraft arrived, in the form of a Beech 99 and Cessna Caravan: aircraft that had apparently been sourced by the Ministry of Defence with hours to spare, following availability issues with the planned jump ship(s). The British Army Red Devils were joined by their US counterparts the Golden Knights in a simultaneous “Allied” jump into Normandy, much like the joint invasion 75 years earlier. Joining the Red Devils were British veterans Harry Read, 95, and John Hutton, 94, who jumped in tandem onto the very soil they had landed on 75 years earlier, as part of the opening landings of D-Day. 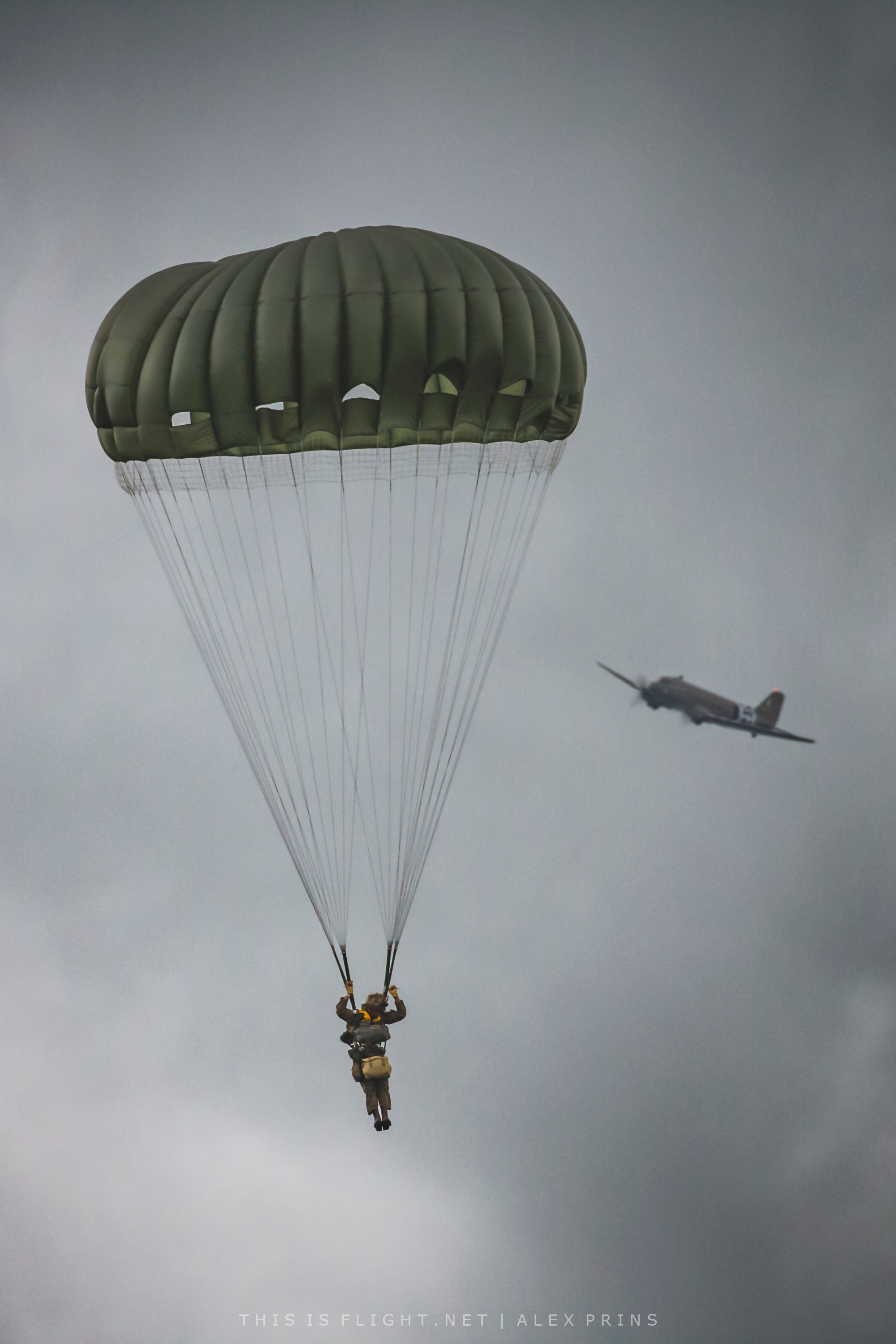 Some time later, the air hummed with the much-awaited sound of Pratt and Whitney radial engines, as the Dakota flight arrived. Despite earlier promising the entire formation of over 20 aircraft would fly over Sannerville, as with the rest of the route to France, “only” the 10 active jump Dakotas appeared overhead. The following few minutes was filled with raucous cheering and applause, and the occasional “OOH RAH” from one enthusiastic American spectator, as each aircraft dropped two ‘sticks’ of 12 men into DZ Kilo. Each landing was greeted with cheers, and the crowd of visitors from all over the world made their appreciation known.

The final landings concluded the events of the 5th of June, just minutes before a torrential downpour that could well have scuppered proceedings, had they taken place much later. The 6th of June, as the 75th anniversary itself, saw the region on a security lockdown for events, and so the Daks over Normandy event itself at Caen was held on the 7th and 8th.

This author will not waste time ranting or speculating as to what exactly went wrong at Caen-Carpiquet Airport, however over the course of the two days no displays, parachute jumps, or scheduled air-to-air flights took place. Traffic management was absolutely non-existent and led to appalling queues; shuttle buses scheduled to bring in visitors from car parks further afield either did not appear, or were many hours delayed. The entry fee of €20 was eye-watering, when visitors arrived onsite to see the assembled Dakota flightline behind two – yes two! – layers of fencing, ruining photographs and precluding any closer access to the aircraft we had paid to see. Through social media it was later announced that flying was cancelled (this was the case on both days) however this author witnessed Daks Over Normandy staff accepting entry fees from visitors for a good half an hour following the cancellation, this despite many disgruntled visitors leaving and demanding refunds. 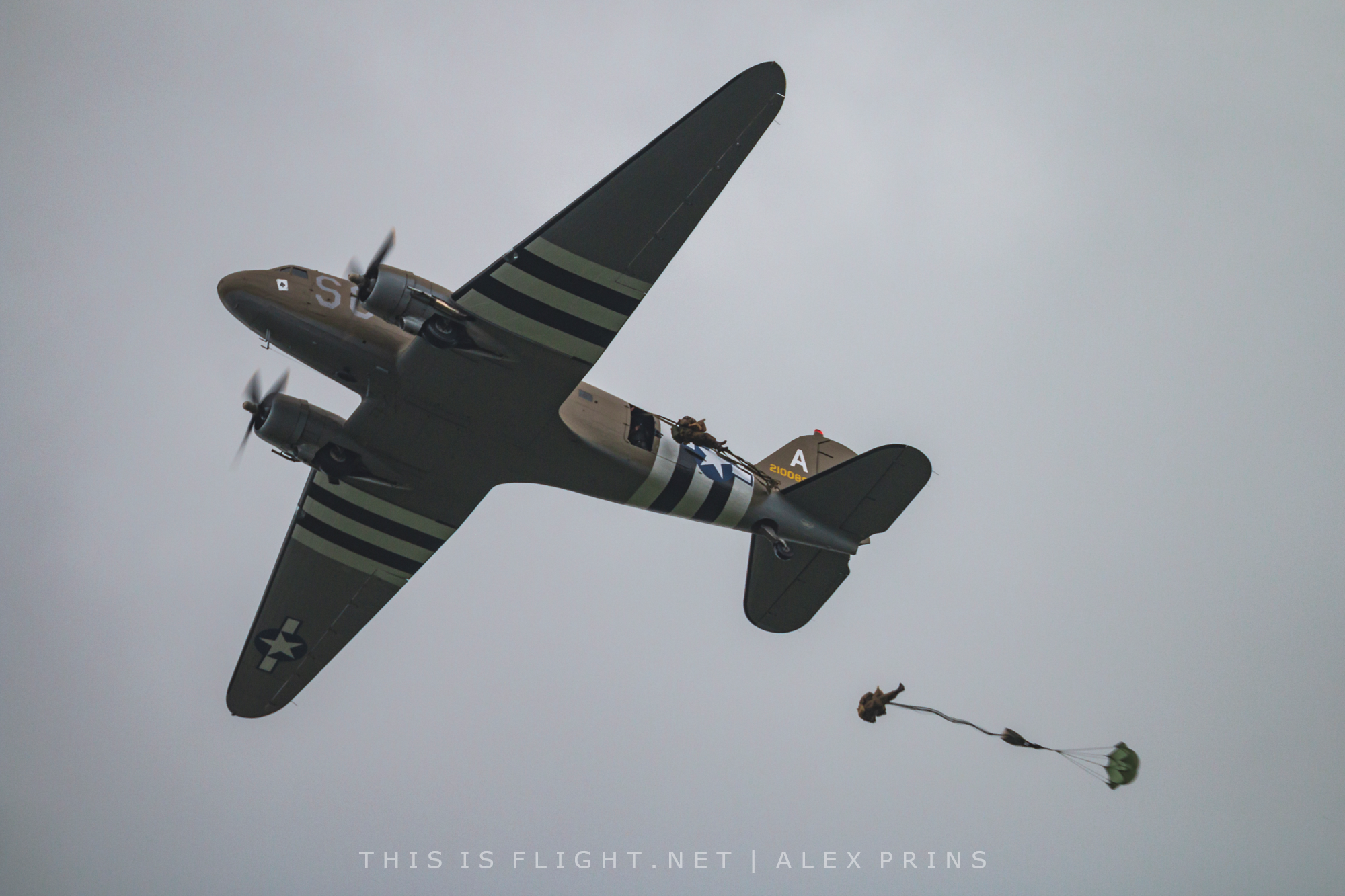 This unacceptable lack of communication and money-grabbing greed overshadowed what was a hugely significant commemorative event. The independent D-Day Squadron were quick to distance themselves from the shambles of Daks over Normandy, and the Squadron must be heartily congratulated: the entire commemorations, and subsequent events in Germany, would not have been even a shadow of the success that they were without the efforts of these overseas visitors.

The mistakes made by Daks Over Normandy are many and substantial. The number of portaloos and catering vans to meet the needs of thousands of visitors could be counted on two hands; exorbitant prices were charged for atrocious food; visitors that had paid four-figure sums to fly as passengers in Dakotas or Texans were left with no information, and no flights took place; two of the three event Directors resigned on the 5th of June, and the remaining figure allegedly was rushed to hospital around the same time; and rumours have since abounded that civilian jumpers that crossed in the Dakotas were left for days without their baggage. While the event did achieve its aim of assembling a large number of Dakota/C47 aircraft in one location, the numbers never reached the 35-40 as listed online. There was some confusion between the itinerary listed on the Daks over Normandy and the Duxford homepages, and while weather and aircraft availability are outside factors, it would have been better to advise of a fluid event rather than committing to a defined schedule.

It is perhaps for the best that this gathering was branded as being “never to be repeated”, as it is quite possible that many aircraft operators would justifiably refuse to participate, and the thousands of angry visitors would be loathe to part with yet more money for likely similarly shambolic events. 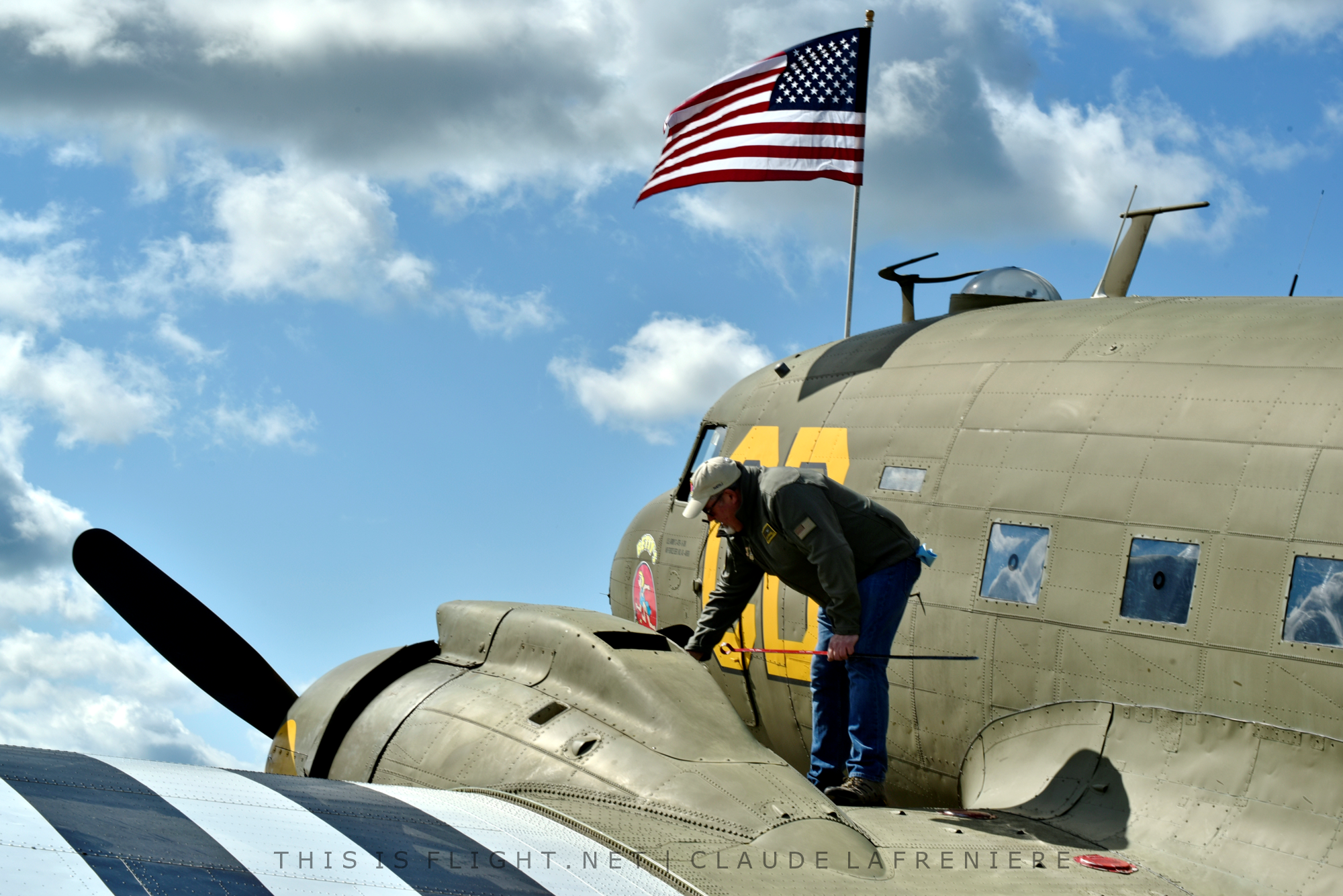 However, we must not let the actions of a few, spoil what was a once-in-a-lifetime event. The massed departure from Duxford, the sight of the huge formation passing enroute across the south of England, the sky filled with ‘chutes trailing from veteran D-Day aircraft – it is these memories that must be treasured and remain untarnished.

The history of the Dakota will always be intertwined with the history of Normandy, and the D-Day 75 saga will prove to be a mere footnote. However, that day a crowd of thousands from around the world, applauded the soldiers that were present for what they had achieved, and remembered those that had gone before them. It was easy to forget, in the tide of emotions that day, that on D-Day alone an estimated 4,400 Allied soldiers were killed, and many thousands more wounded – in the months that followed that number would increase significantly.

We can commemorate, but we must never forget:

They shall grow not old, as we that are left grow old:
Age shall not weary them, nor the years condemn.
At the going down of the sun and in the morning
We will remember them.