Aero Gatineau-Ottawa returned for its fourth edition from the 10th-12th September 2021 at the Gatineau-Ottawa Executive Airport, after having been cancelled in 2020 due to the global pandemic. The volunteer organizing team had to content with the health alert levels of the province of Quebec, whose restrictions jeopardized the holding of the show; if the maximum number of spectators allowed at the event had been lowered too far by public health officials, the organization would not have been able to break even on the costs of running the event. 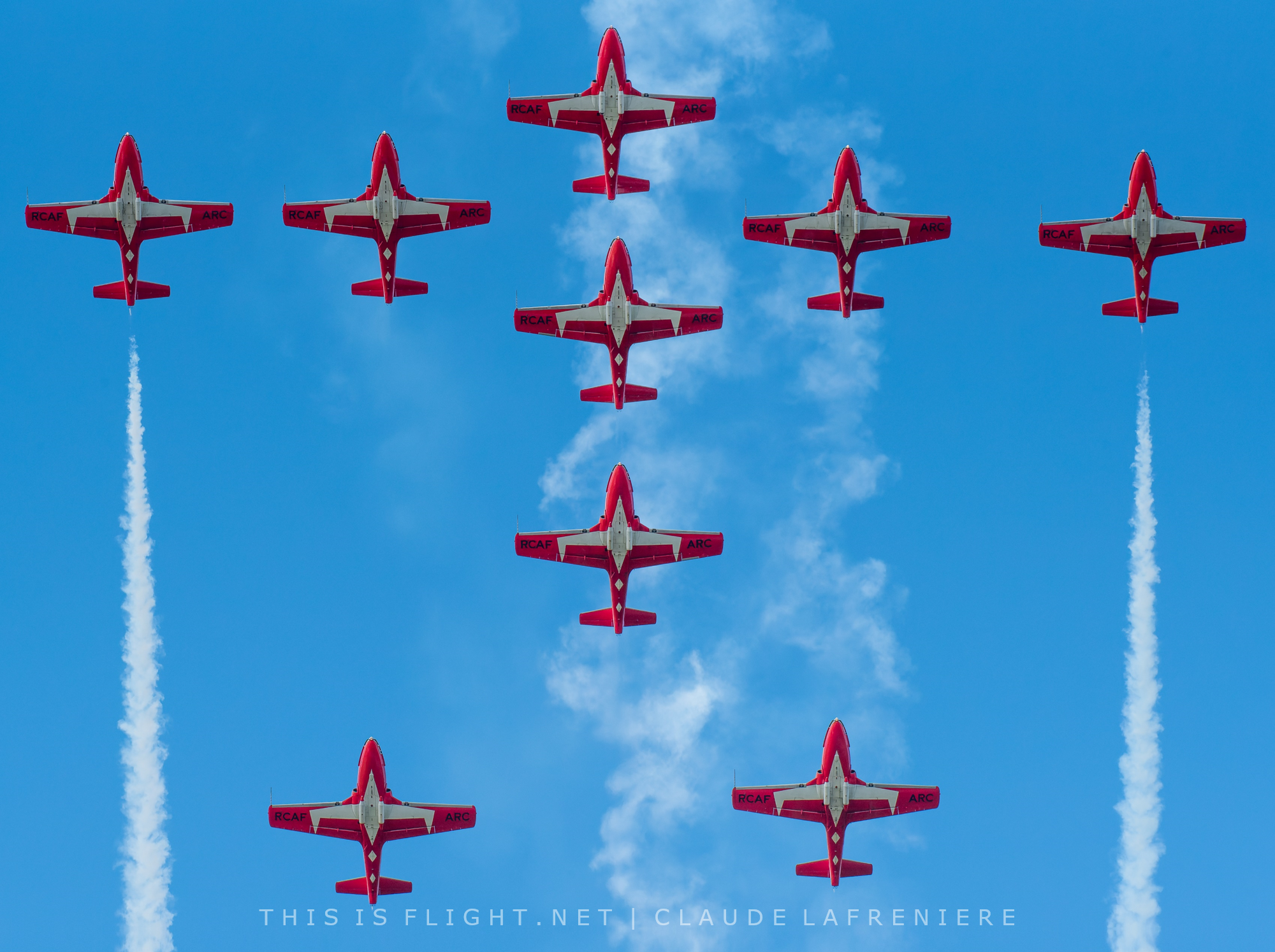 Eventually it was agreed that the show was able to take place under the “drive in” formula successfully used at the majority of North American airshows the previous year – a solution that is still very much the norm in Canada. The site was broken into separate pricing zones, each of which was divided into small lots to allow aerobatic enthusiasts to watch the show from in and around their vehicle. With attendance limited to just 550 vehicles each day, starting at $79 for a car, tickets flew away in a few weeks and the event was sold out. 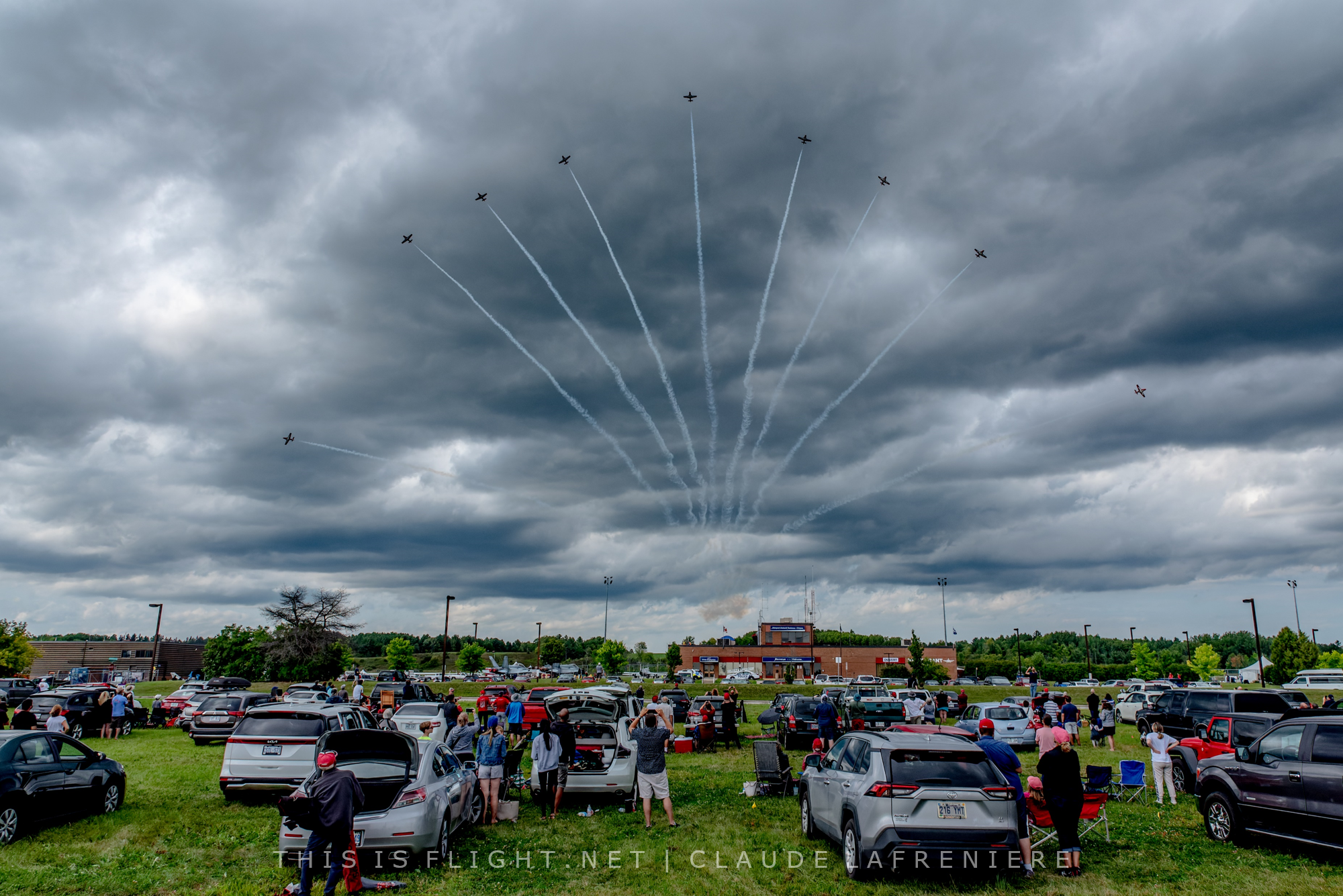 The visitor experience was very different from that of 2019, with no static display, no concessions and fewer spectators. Most military jets, aside from the CF-18, were based at Ottawa Airport, and civil and vintage aircraft staging from Gatineau operated from areas that were not accessible to the public. It is obvious that the pandemic has hurt; normally the event attracts up to 30,000 visitors, while this year only 5,050 visitors attended the event. 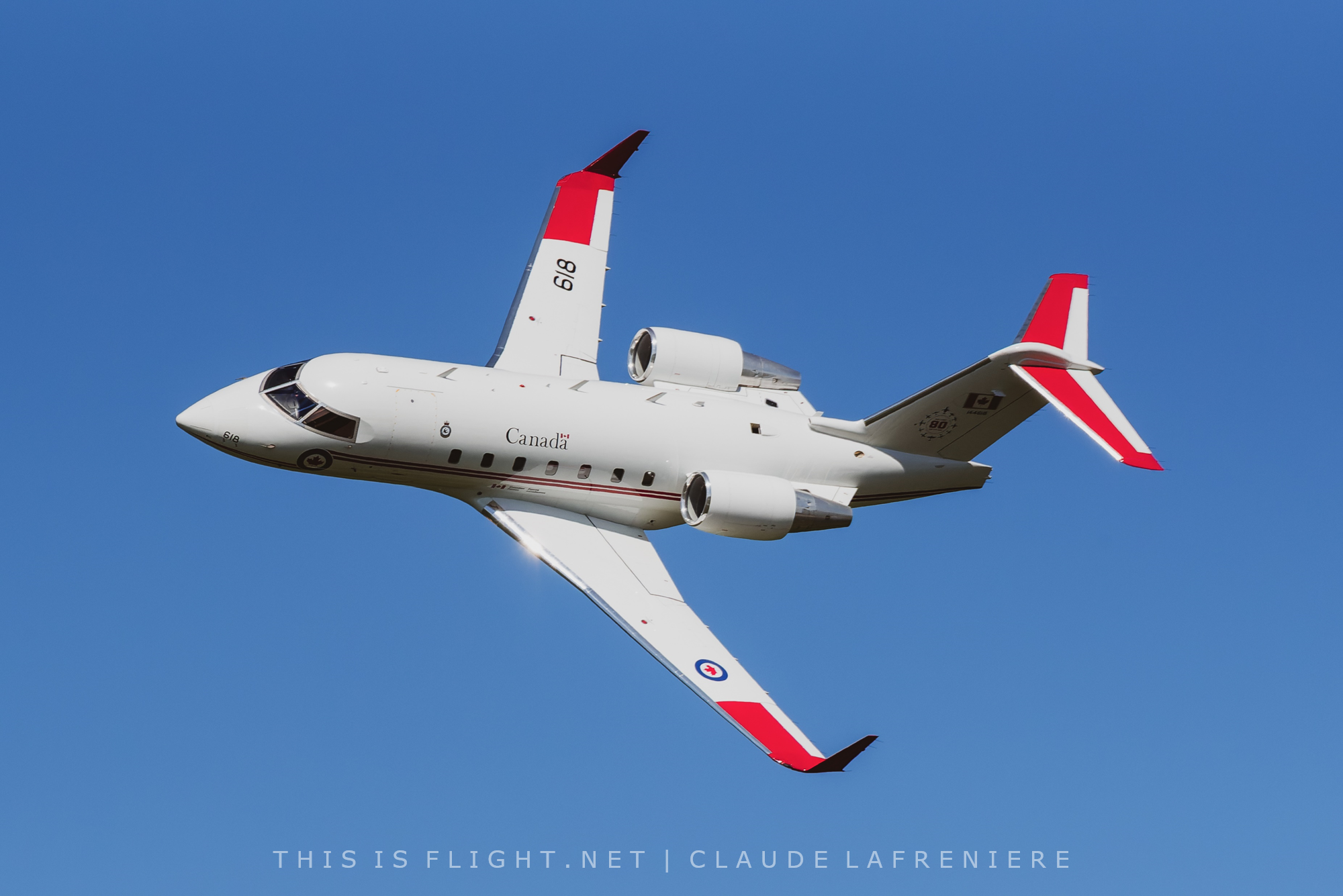 Even in the best of circumstances, organising an airshow is very complex and rarely does everything go as planned. There were several cancellations and last-minute changes in the flying program, for reasons beyond the organizers’ control, but luckily, the organizing committee had a Plan B. The planned line up was very diverse, including the two Royal Canadian Air Force demonstration teams, the Snowbirds and the CF-18, as well as many classic aircraft and warbirds, but the highlight was arguably the US Air Force’s F-16C Viper Demonstration Team, attending the event for the first time. Sadly, on the 11th August, the team’s pilot, Major Garret “Toro” Schmitz, had a serious mountain mike accident which prevented him from flying for eight weeks, and the team’s participation was cancelled.

Initially, this was a major disappointment, but the US Air Force stepped up by proposing the F-22A Raptor Demonstration Team as a replacement. This was not without its complications; on the logistical side, it would be necessary to host a team of 14, rather than a team of six, and the cost to the airshow would be significantly higher. The USAF also requires more stringent contingency plans for the F-22, including a diversion airport equipped with arrestor cables within a 75nm radius of the show site. Mirabel was just within range, and suitably equipped, but the airport was unable to deploy its arrestor cables during the required time slots; the busy cargo hub is now operating at full capacity, and deploying the cables would have meant closing its only active runway for several hours. As a result, the F-22 also had to withdraw.

Other cancellations, for a mix of reasons, included the P-40 Kittyhawk, Hawker Hurricane Mk.XII, Canadair CL-415 water bomber, the International Test Pilots School’s L-39C Albatross and the Monster Pitts 12, but despite this, organisers managed to secure a high quality line up featuring 14 performers and more than 35 aircraft. 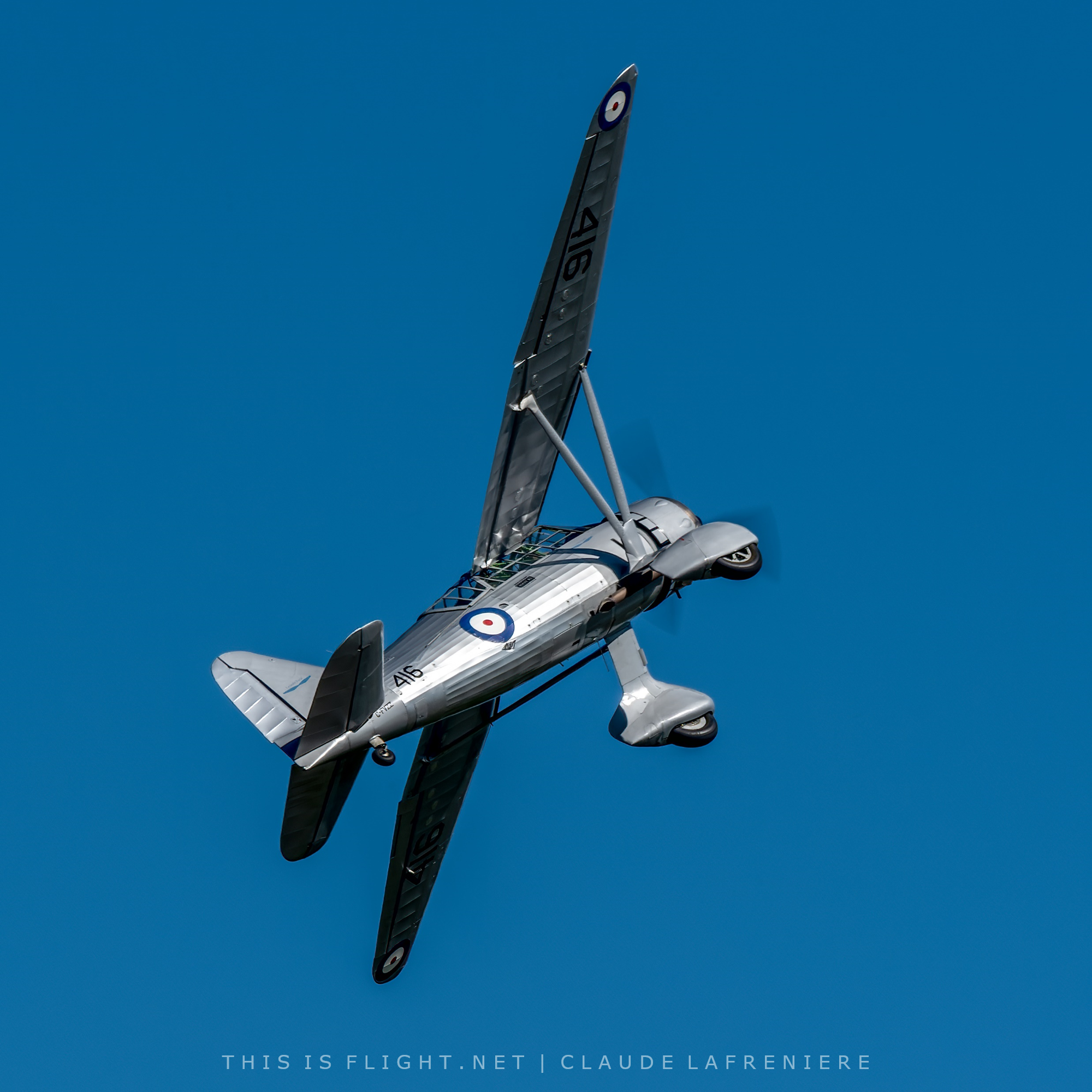 Opening the show was Westland Lysander C-FVZZ, followed by four training aircraft emblematic if RCAF pilot training, painted in the standard yellow livery of all Canadian training aircraft of that era. Coming from the Vintage Wings of Canada, the quartet included the Fleet Finch II, a pillar of the RCAF’s Elementry Flying Schools during the outbreak of WWII, the Fairchild Cornell, DHC-1 Chipmunk and T-6 Harvard Mk.IV. This was followed by two more training aircraft: a pair of L-29 Delfins from ACM Warbirds of Canada. 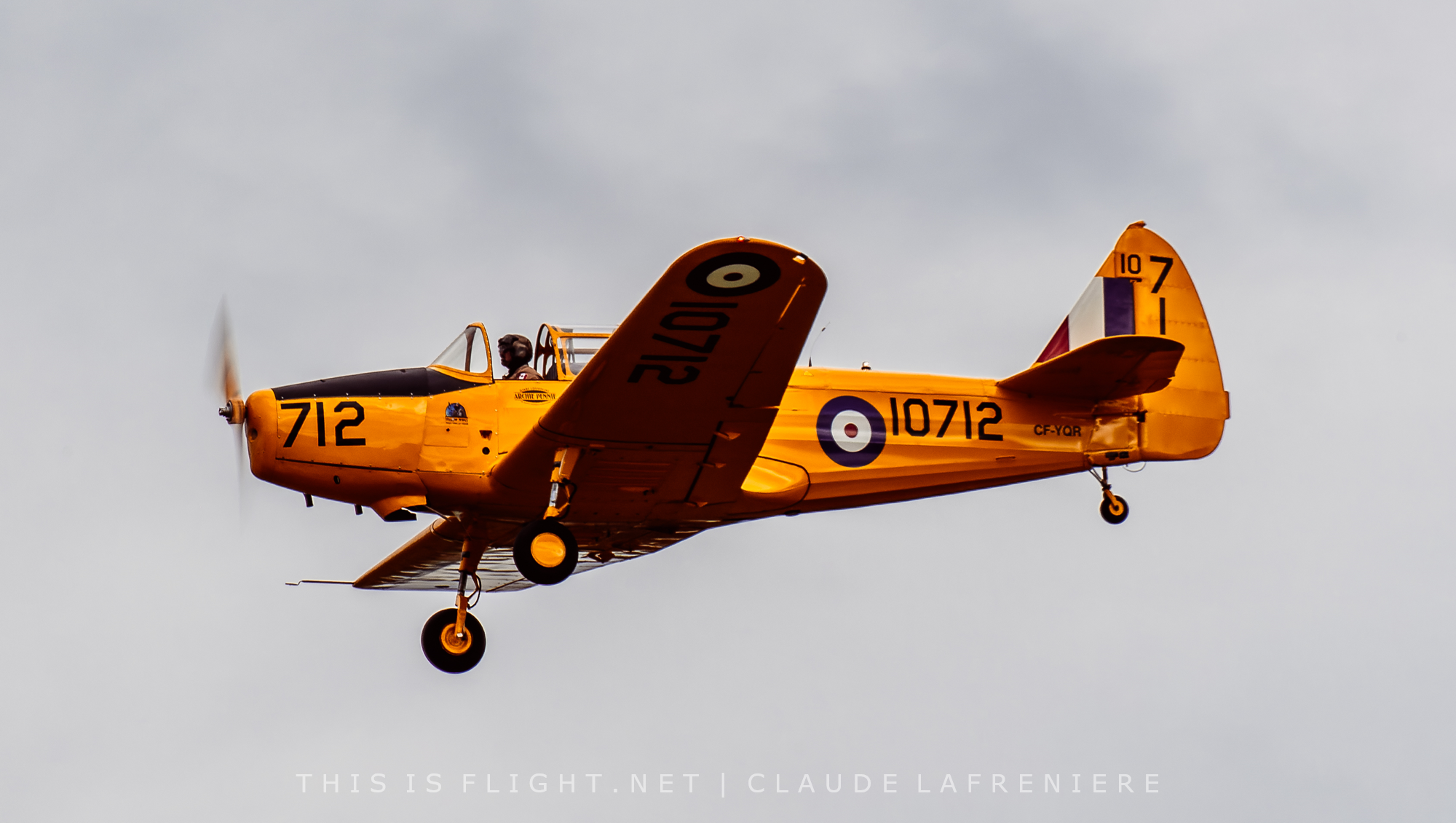 A very rare participant indeed was de Havilland DH-83C Fox Both C-FYPM. This particular Fox Moth has perhaps the best pedigree of all. Its first owner was Edward, Prince of Wales (later King Edward VIII, who abdicated in 1936). Operated by the Royal Flying Corps for around a year, it was then sold into the private market and eventually abandoned in Fiji in 1993. Its remains were brought to New Zealand for restoration in 1993. 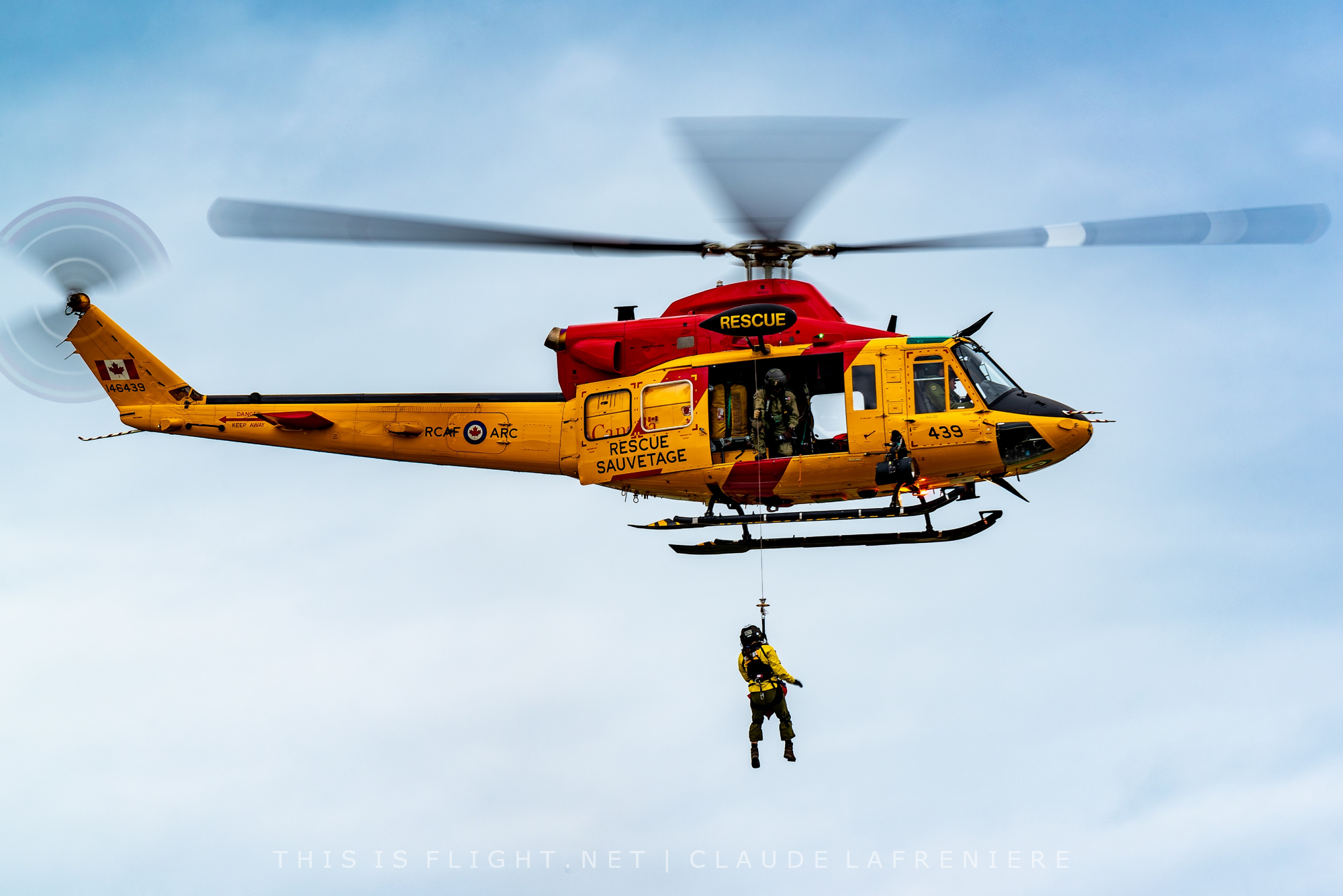 Although the Royal Canadian Air Force’s official demonstration teams headlined the show, the air force provided several other types for flypasts and solo displays. A CH-146 Griffon from 439 Combat Support Squadron at 3 Wing CFB Bagotville performed a simulated rescue of a person in distress, and an impressive “CH-148 Cyclone” helicopter from 423 Maritime Helicopter Squadron from Shearwater, N.E. demonstrated maneuverability and stability. 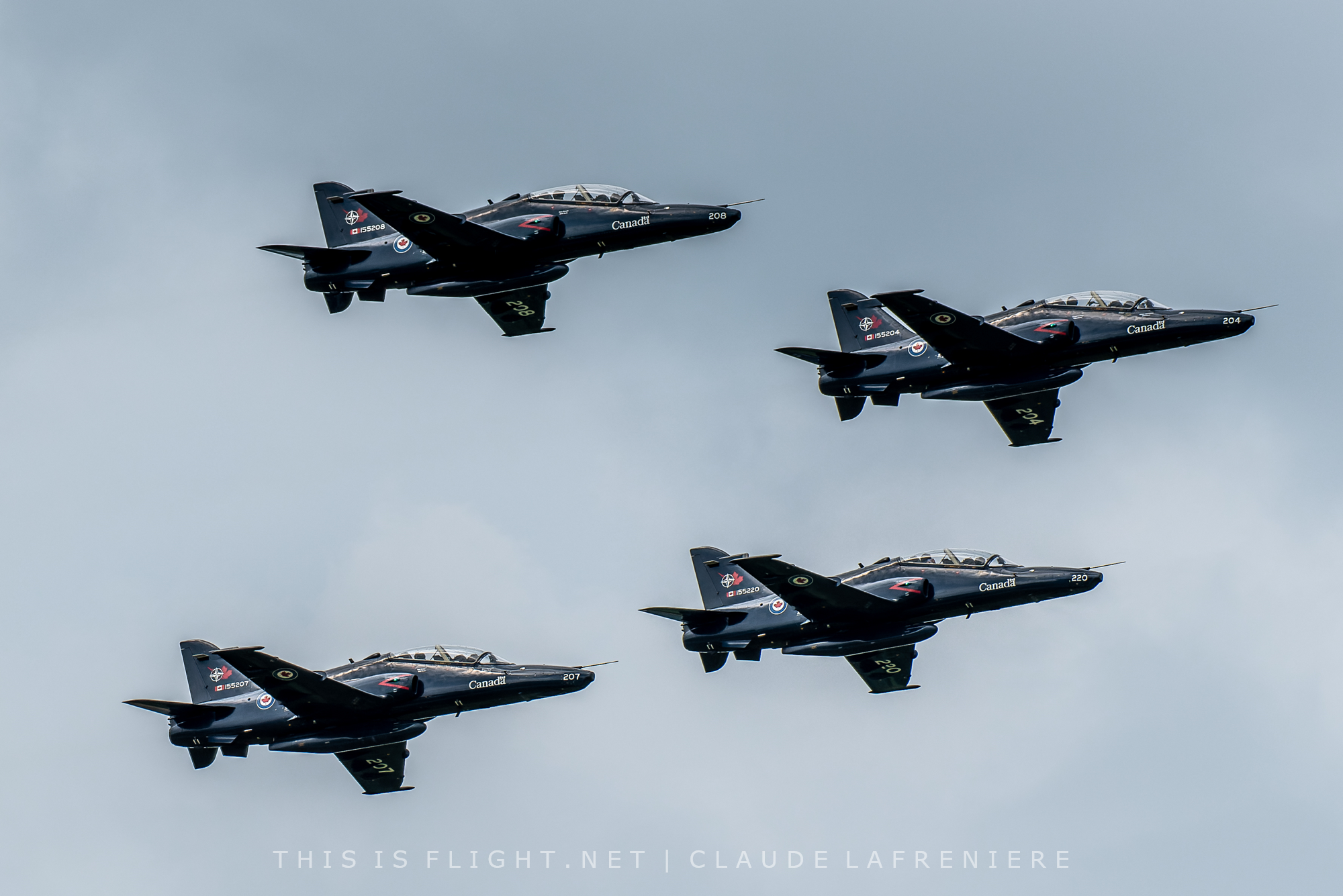 Flypasts came from a CT-156 Harvard II from Moose Jaw, a four-ship of CT-155 Hawks, and, perhaps most unusually, a CC-144C Challenger of the 412th Transport Squadron, which made several graceful non-aerobatic passes over the airport. 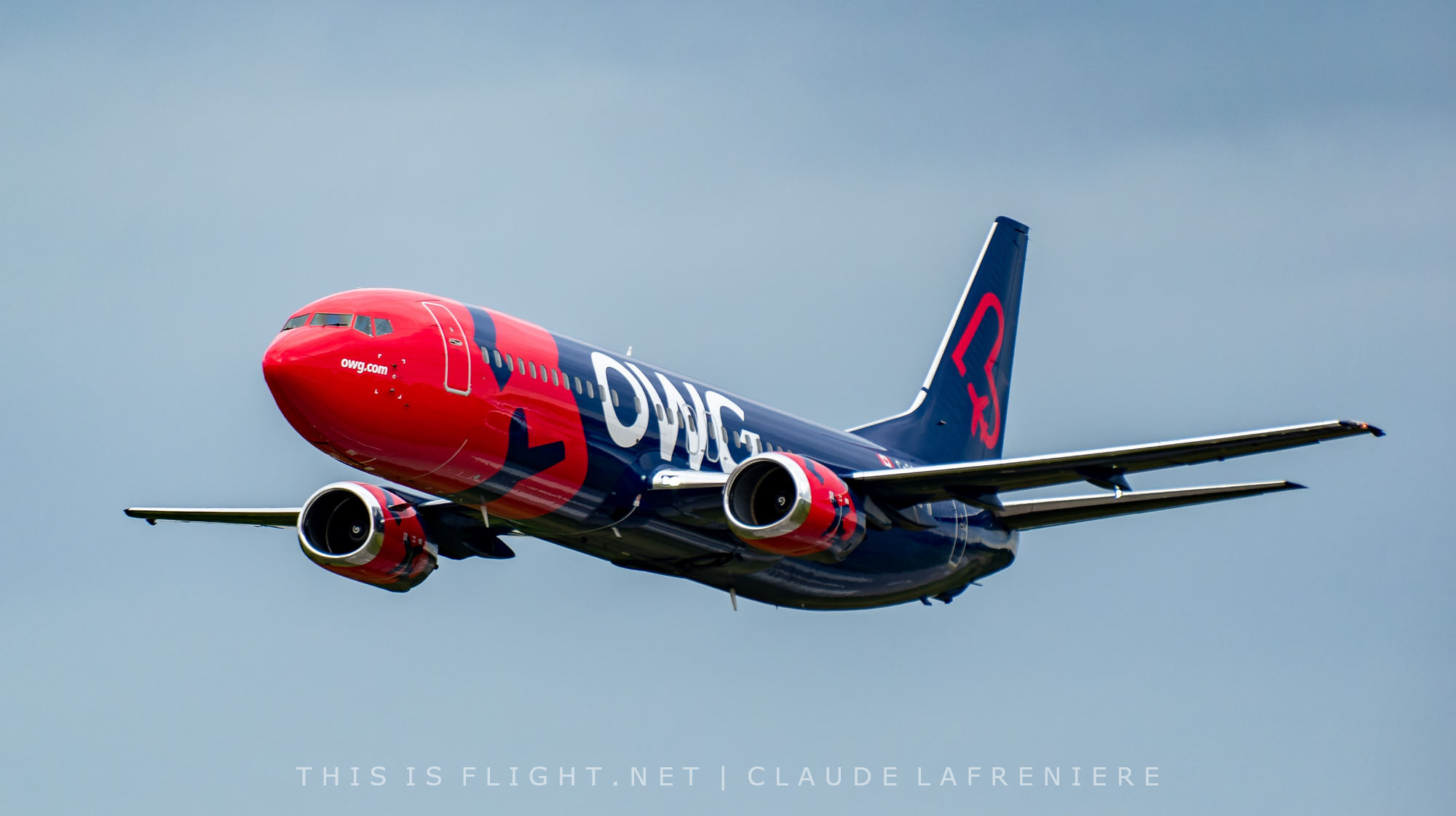 Taking advantage of a rare chance to show off to a crowd, new Quebec airline OWG (Off We Go) provided a Boeing 737-408 for a flypast. The airline was founded in 2020 as a division of Nolinor Aviation, and operates a fleet of three 737-400s, modified for an increased gross weight with re-enforced landing gear and other structural changes, which gives the aircraft a similar payload to the 737-800. 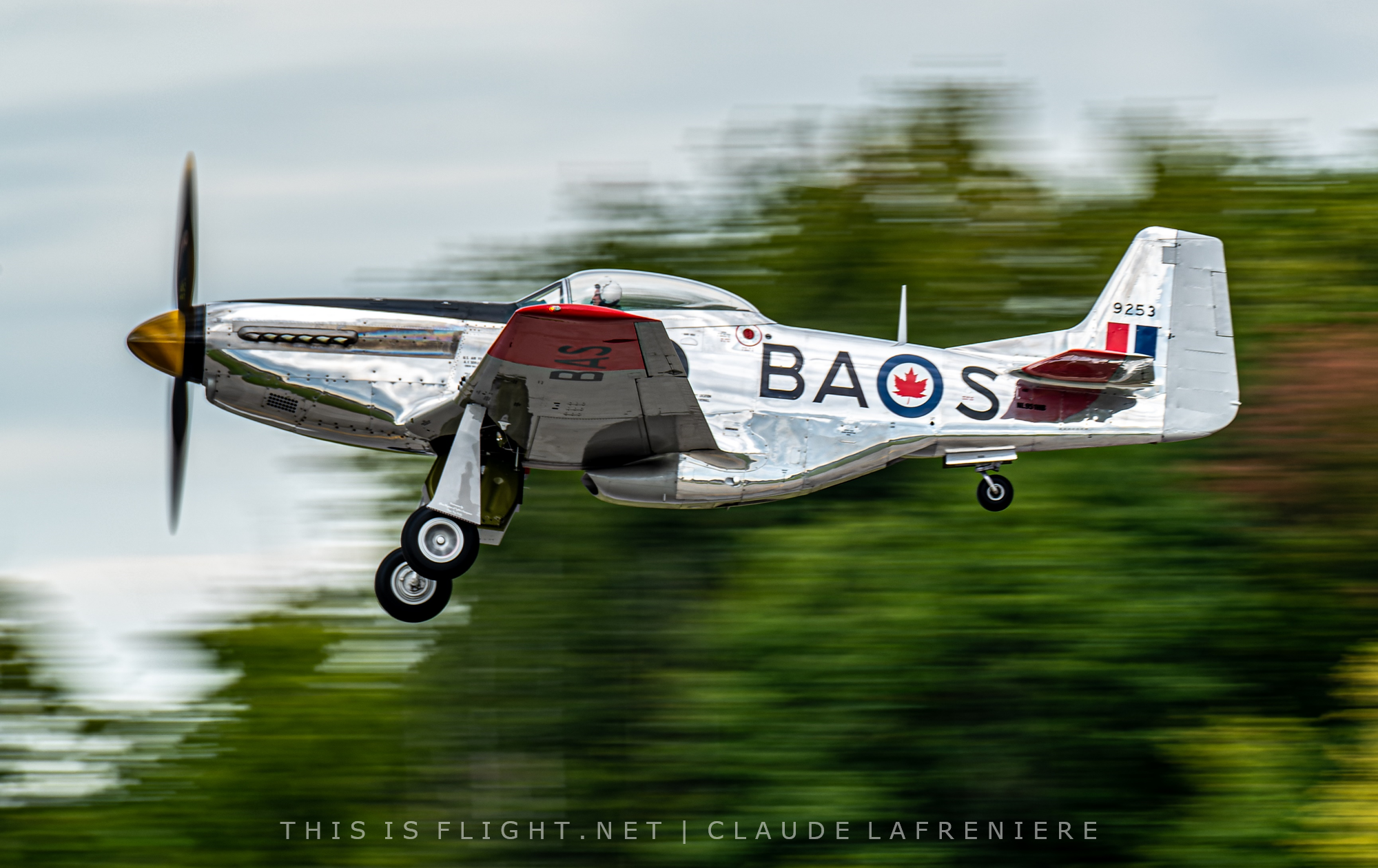 No airshow at Gatineau would be complete without the presence of classic Second World War fighters, and this year we were spoiled by three such aircraft. Vintage Wings of Canada’s Spitfire Mk.IX flew alongside Hannu Halminen’s P-51D Mustang in the colours of RCAF 9253 for a formation display, while a second Mustang (Louis Horschell in TF-51D “Mad Max”) performed an impressive solo display. 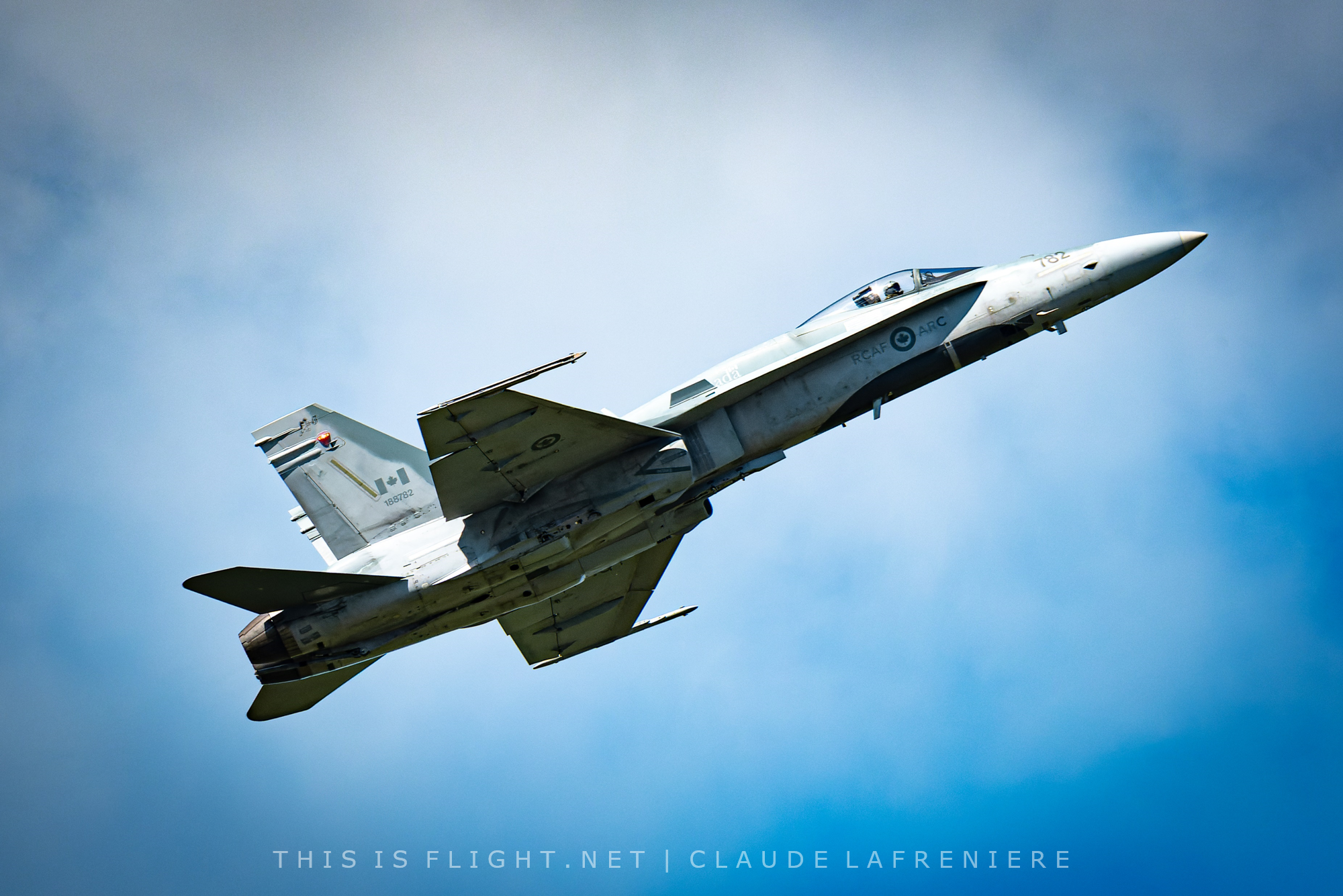 Always a crowd favourite, the CF-18 Demo Team took to the air with Captain Daniel “Delouse” Deluce at the controls. Unfortunately, as in Toronto one week earlier, the team were not able to fly their specially-painted display jet, with technical problems forcing Deluce to use a replacement aircraft all weeked.

The airshow was closed by the highly-anticipated Snowbirds of the 431st Air Demonstration Squadron. This year, the team is wearing a modified paint scheme with a gold band down the side of the fuselage and gold numerals on the tails, marking not just to the team’s 50th anniversary, but also paying tribute to one of their forerunners, the Golden Centennaires. 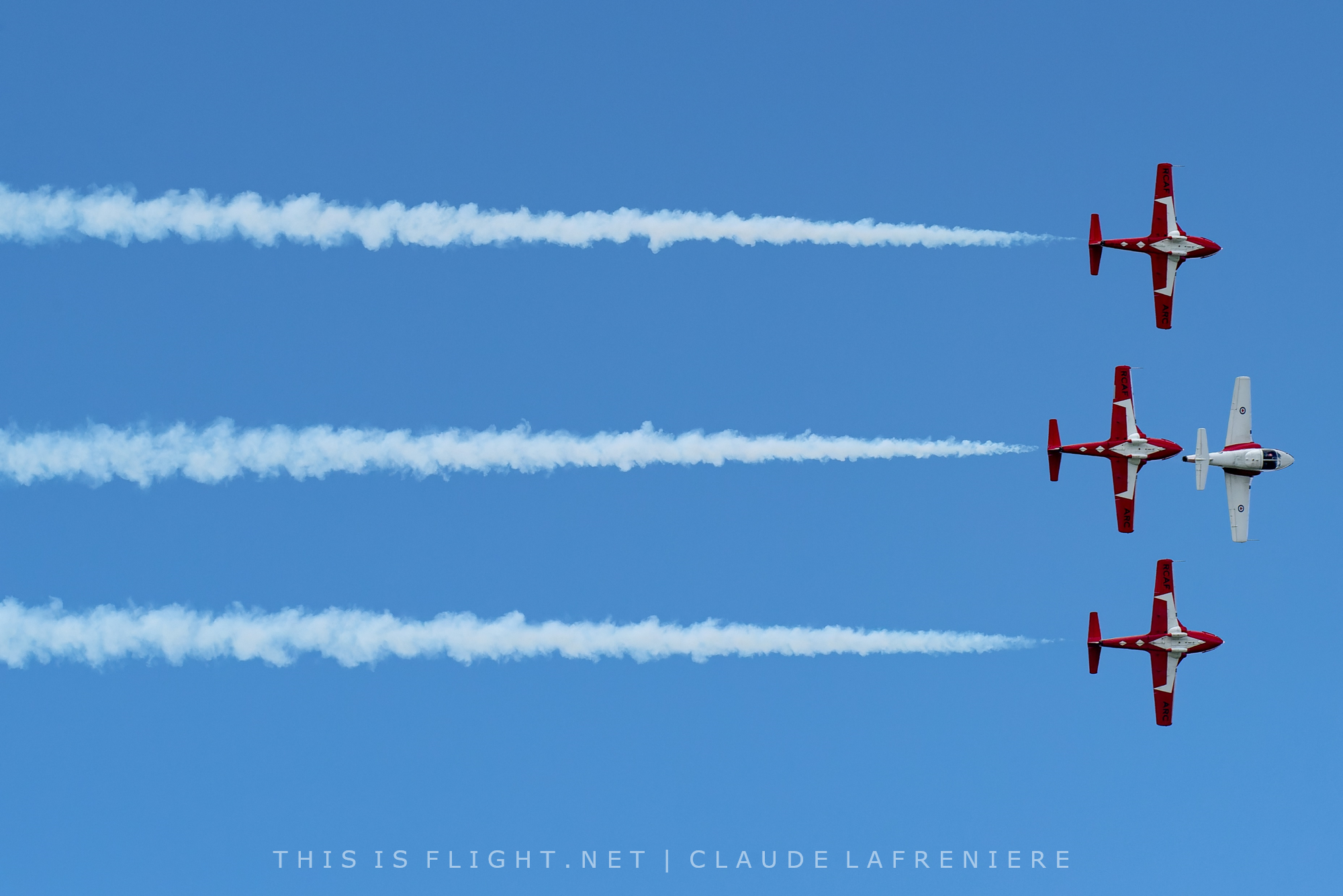 Despite all the challenges and last-minute changes, Aero Gatineau-Ottawa 2021 was a very interesting show with an impressive list of performers, which, given the circumstances, was a miracle. The next edition is scheduled for the 16th-18th September 2022, with the US Air Force’s A-10 Thunderbolt II Demonstration Team planned to attend; perhaps this time, plans for the USAF to perform at the event will finally come to fruition.