Presented for the first time in 1953, the Bagotville International Airshow (SIAB) has built a solid reputation in North America, distinguishing itself on several occasions by winning awards at the annual International Council of Air Shows convention in Las Vegas, Nevada. The airshow is presented every two years, and this year saw record attendance of 143,000 visitors – up from the previous record of 132,000 set in 2017. 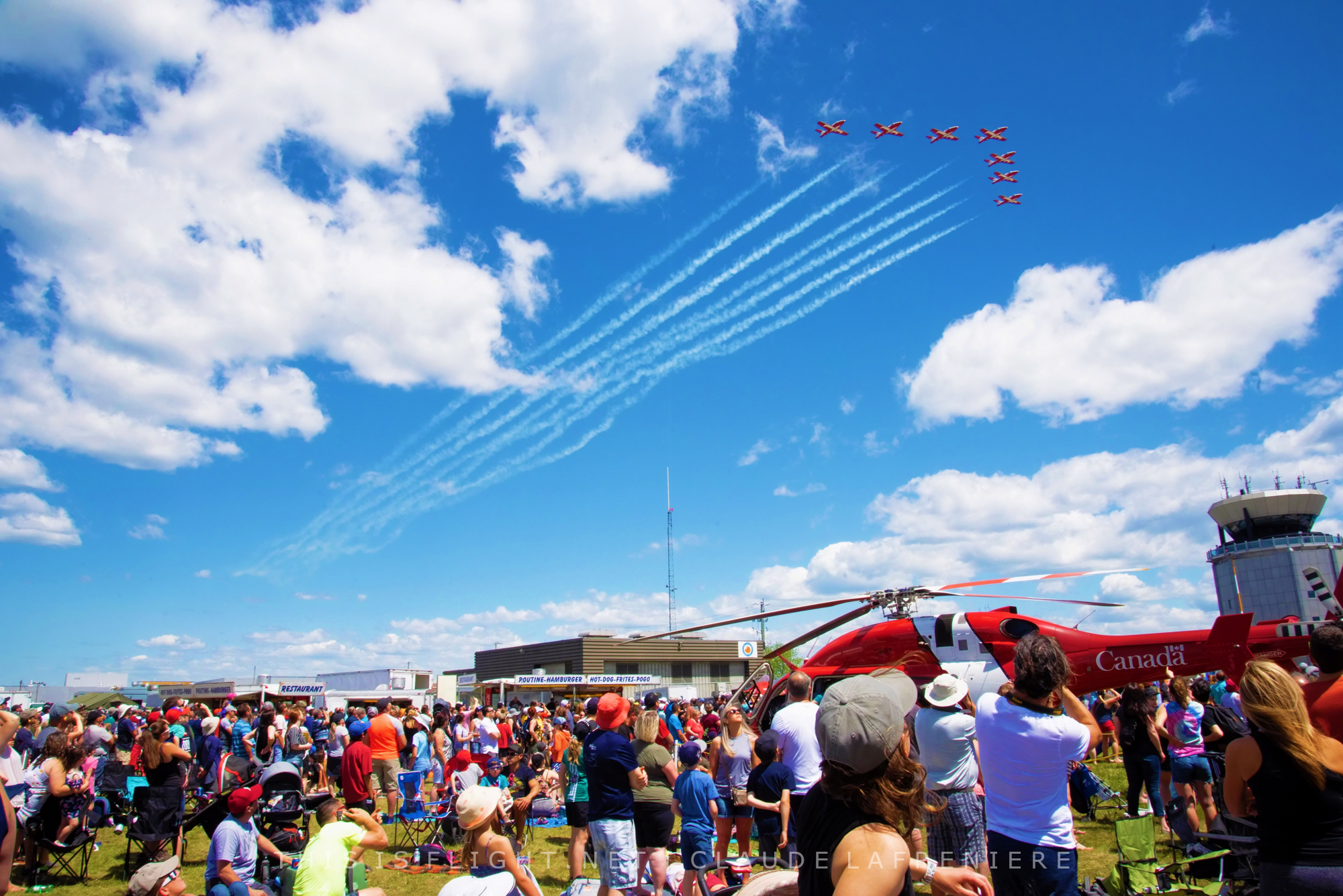 The list of guests and performers was impressive, with the three main Canadian Forces demonstration teams on site: the CF-18 Demonstration Team, the 431th Demonstration Squadron (more commonly known as the Snowbirds) and the Skyhawks parachute team – although ultimately, weather prevented the Skyhawks from jumping. The most anticipated visitor, though, was undoubtedly the USAF F-35A Lightning II Demonstration Team, performing in Canada for the first time. SAIB 2019 also saw a larger number of military and civilian aircraft on static display as the site was expanded, as well as numerous land combat vehicles used by the Canadian Forces, thanks to the participation of the CFB Valcartier Armed Forces Base.

A global pioneer of event eco-responsibility in its field, the Bagotville International Airshow was the most environmentally friendly airshow ever to have been presented in North America, and perhaps the world, by offsetting more than 900 tonnes of greenhouse gas emissions by the planting of 4,000 trees. 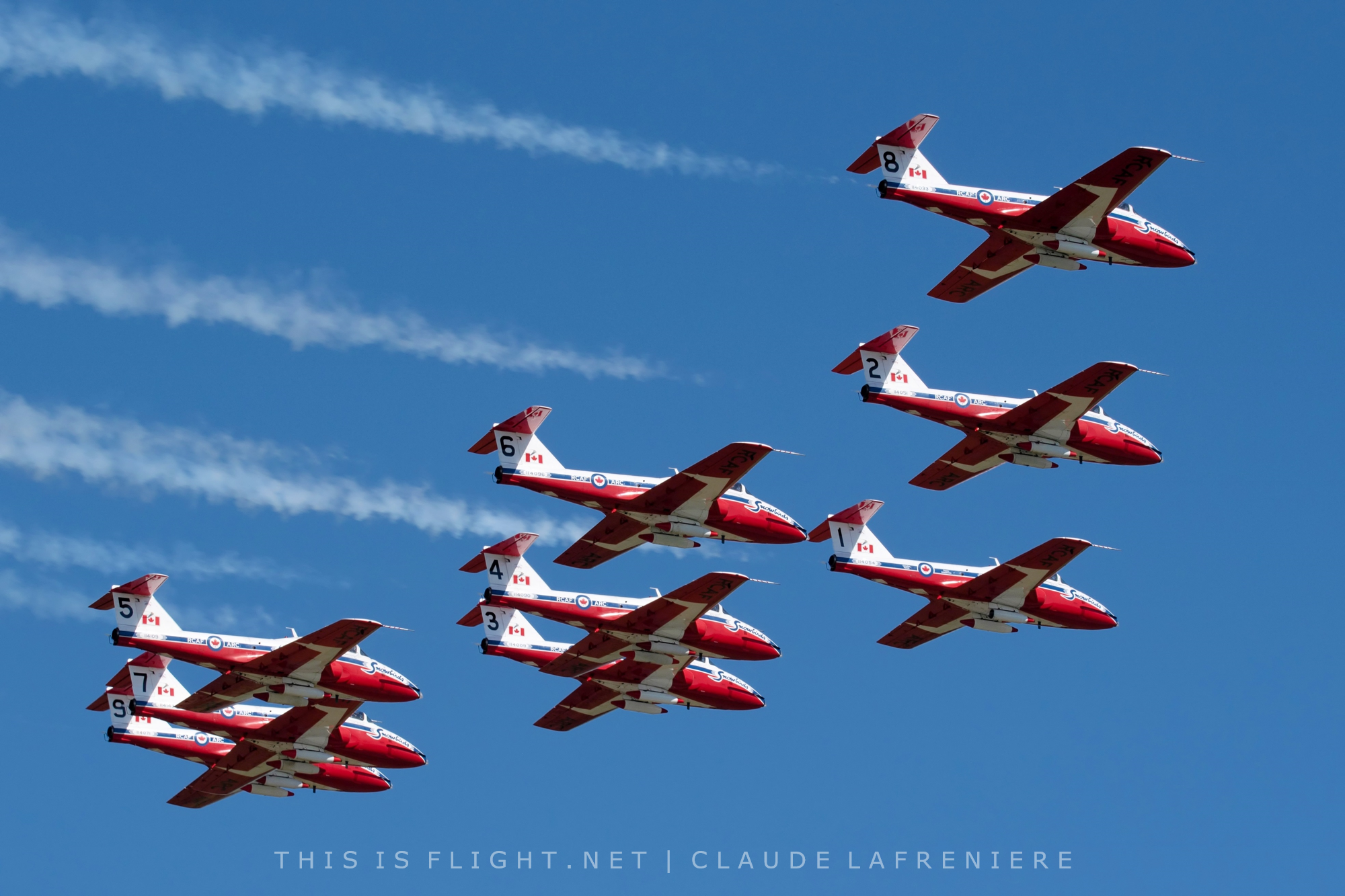 There were some unfortunate changes before the show, including the cancellation of Anna Serbineko’s performance due to weather in British Columbia and changes to the CF-118A “mass attack”, which saw the parachute jumps and ground pyrotechnic effects axed.

Despite this, the performances enjoyed by the crowd were varied and impressive. As usual, the nine pilots of the Snowbirds flying on the Canadair CT-114 Tutor under Major Leader Team Leader Major Denis Bandet, impressed the crowd with a beautifully precise aerial ballet. 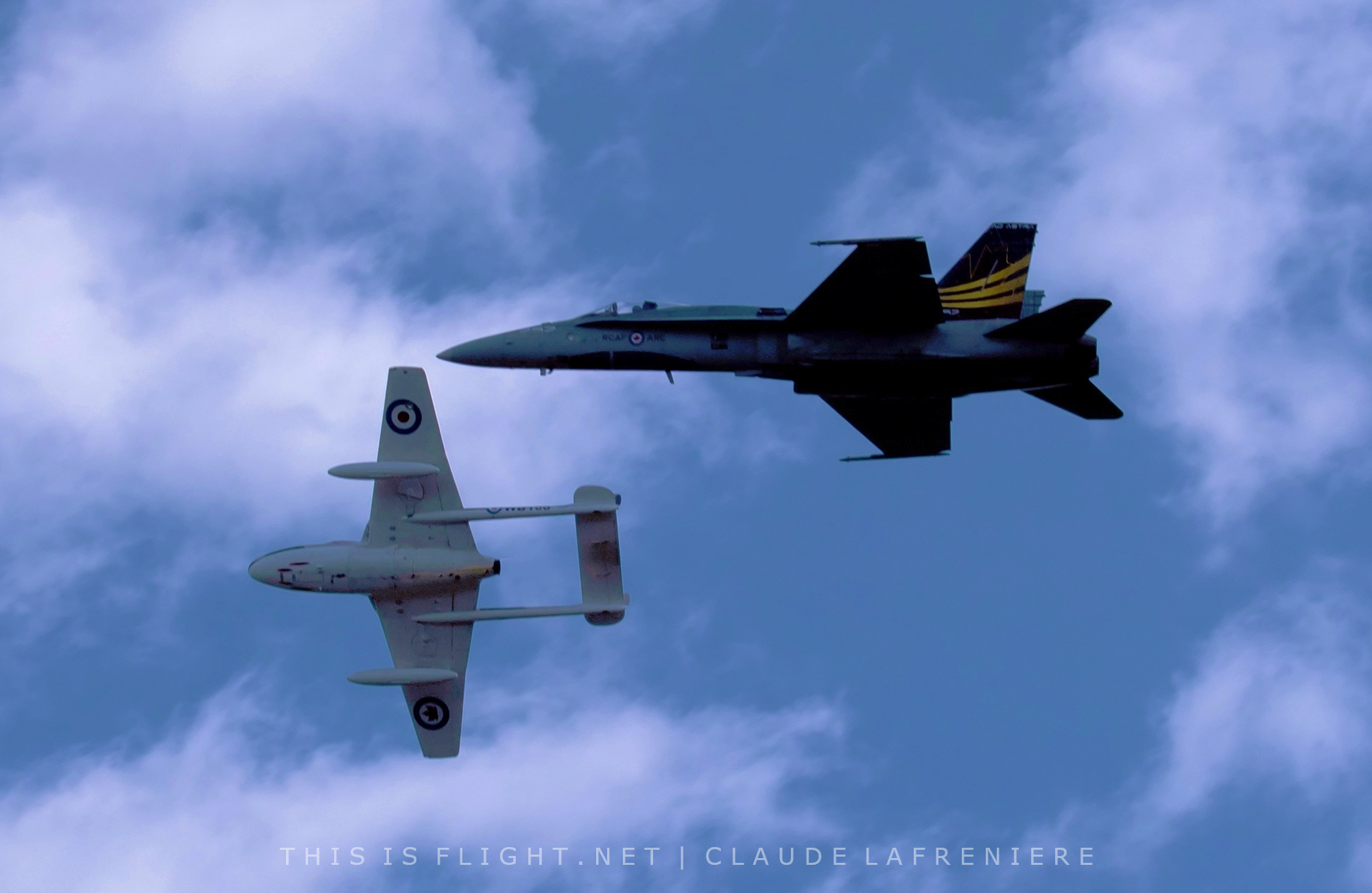 We also saw the impressive performance of the Capt. Brian “Humza” Kilroy, flying the CF-188A Hornet solo demonstration. During his practice on Friday, both the team’s aircraft experienced technical difficulties which could have compromised the weekend’s show, but the technical team worked all night to make sure to get the aircraft back in perfect working order for the weekend.

Like every year, the CF-18 Demonstration Team aircraft receives a special painting to illustrate a theme chosen to represent the history of the RCAF. The 2019 theme is “Up to the Stars”, a choice inspired by the RCAF motto “Sic Itur Ad Astra” (Latin for “Here’s the Way of the Stars”), to celebrate the journey which led to the modernization of the ARC and the main cultural and technological innovations. 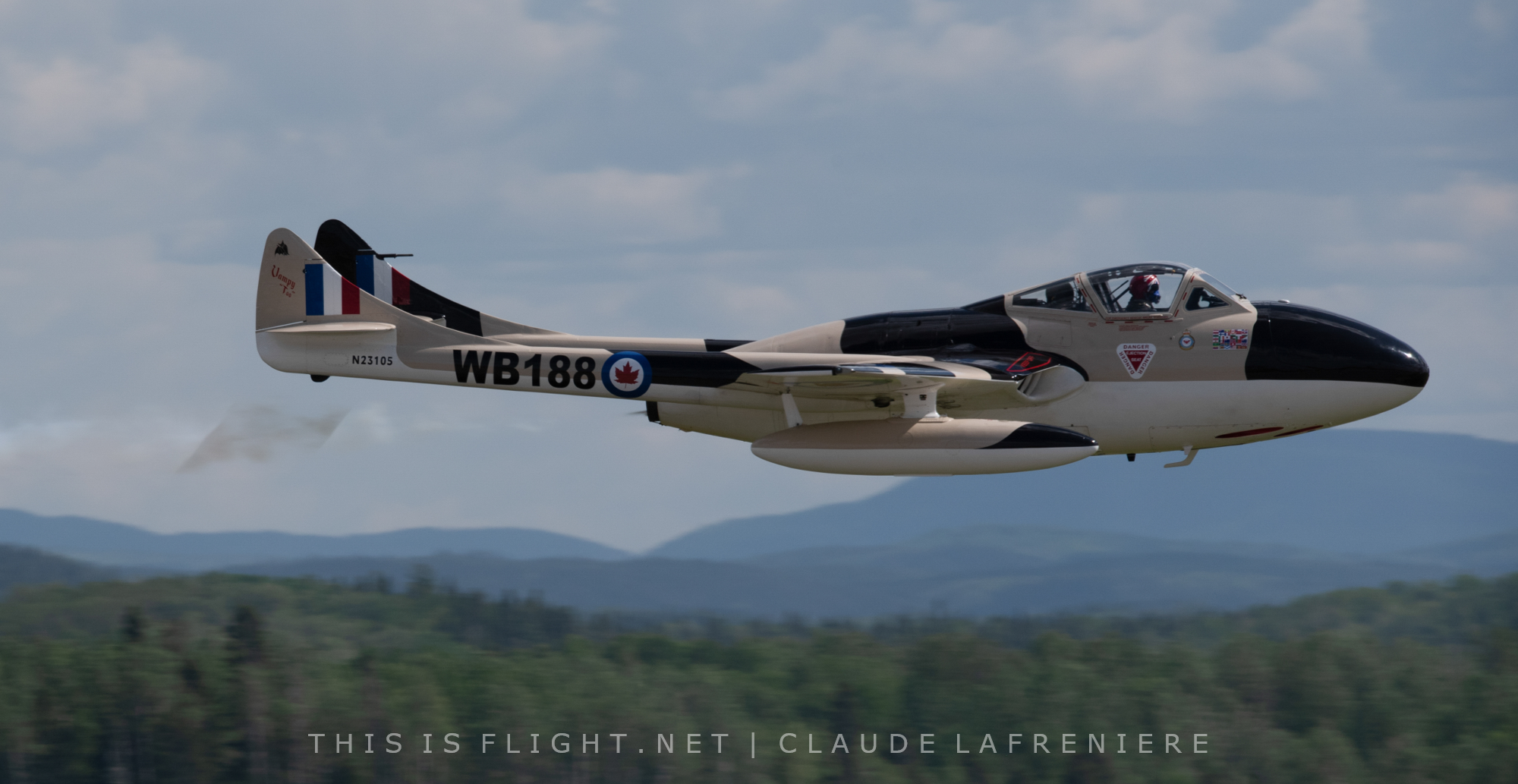 Unfortunately, the CF-18 Demonstration Team saw its schedule reduced by 40% compared to last year, in part due to significant personnel shortages in the RCAF. Some observers of the Canadian military scene find this decision questionable as it is difficult to see the logic of reducing recruitment efforts in times of staff shortages.

The CF-18 also performed a heritage flight with Jerry Conley in a de Havilland DH-115 Vampire. The Vampire, which was the first jet fighter used by the Royal  Canadian Air Force, also performed a beautiful solo display. 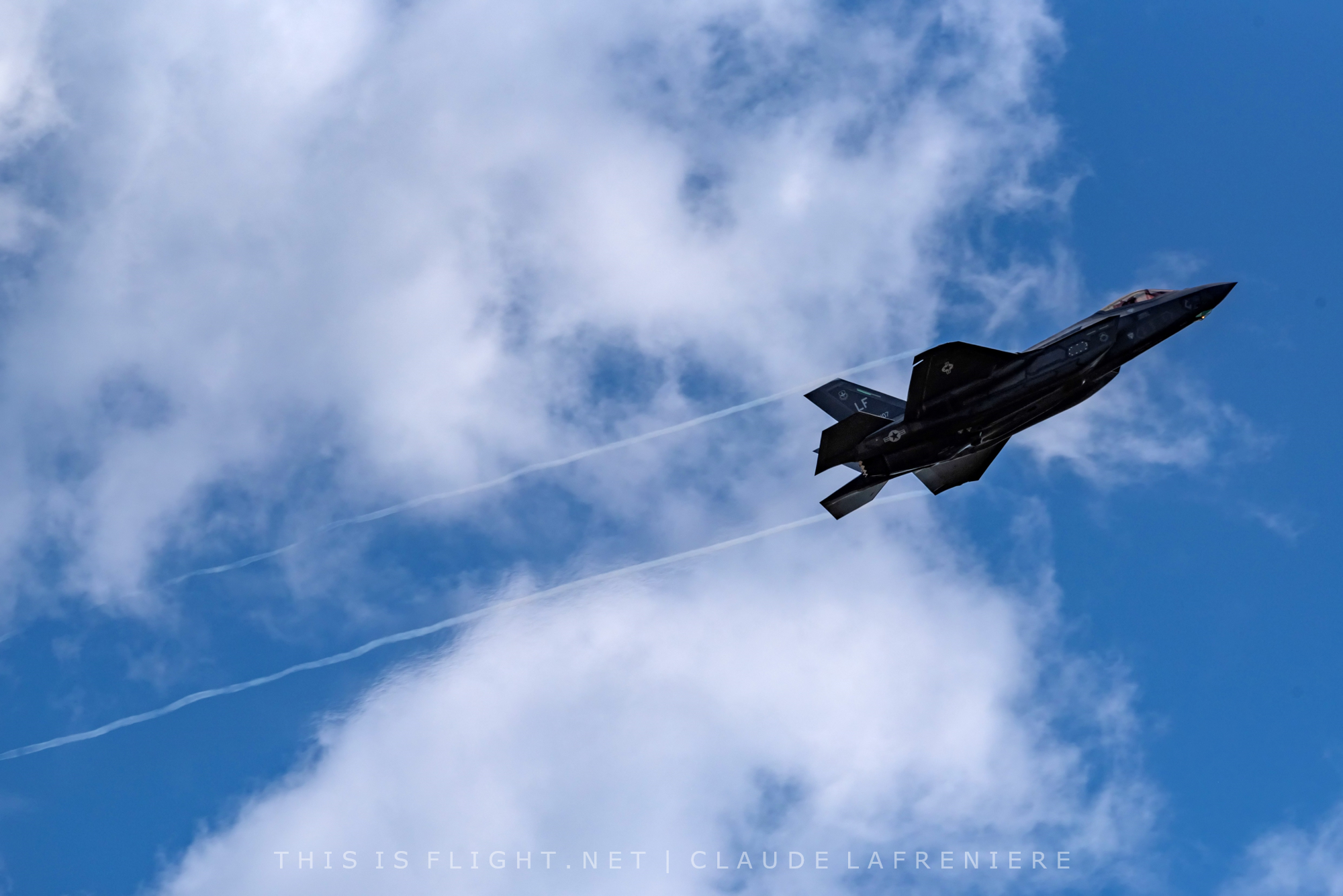 Of course, the most anticipated performance of the weekend was that of the U.S. Air Force F-35A Lightning II Demonstration Team, from Luke Air Force Base in Arizona. Captain Andrew “Dojo” Olson rocked the skies of Bagotville with the jet’s Canadian airshow debut. The display comes at a time when the F-35 is under consideration for procurement by the Canadian Forces, along with the Super Hornet, Eurofighter Typhoon and Saab Gripen. 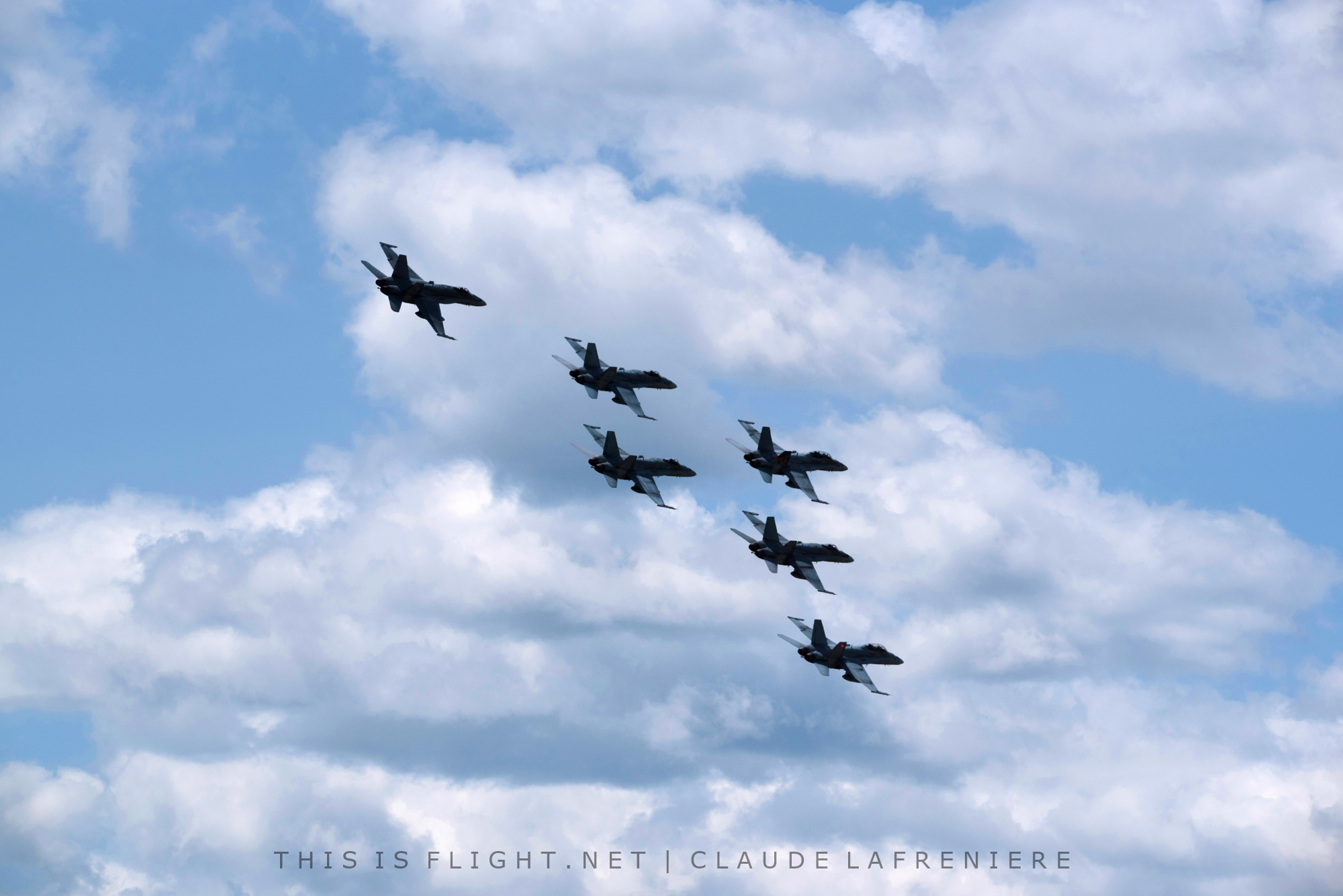 One of the highlights of the show was the CF-18 Hornet “mass attack”, a simulated attack on an enemy airfield with a squadron of six CF-18s bombarding the enemy air force and rendering the runways unusable. The demonstration was also due to feature parachute drops from a CC-130 Hercules to neutralize enemy forces on the ground, although this was canceled following the death of a Canadian paratrooper during an exercise in Bulgaria shortly before the show. All such parachuting within the Canadian Forces was suspended until the cause of the accident could be identified. Ground-based pyrotechnics were also canceled for insurance reasons. Despite these setbacks, the massive attack of six CF-18s flying around the base simulating a bombing attack, supported by the CC-130 Hercules that simulated a paratrooper’s drop, was a thrilling sight.

Colonel William “Fat Daddy” Radiff, the outgoing commander of CFB Bagotville, made the final flight of his career as a CF-18 pilot during the mass attack, leading the six CF-18s. At the end of the demonstration, instead of landing his aircraft as planned, he pushed the throttle forward and made several more circuits in front of the 50,000-strong Sunday crowd.

The final military display came from a CH-146 Griffon, which conducted a simulated search and rescue mission. 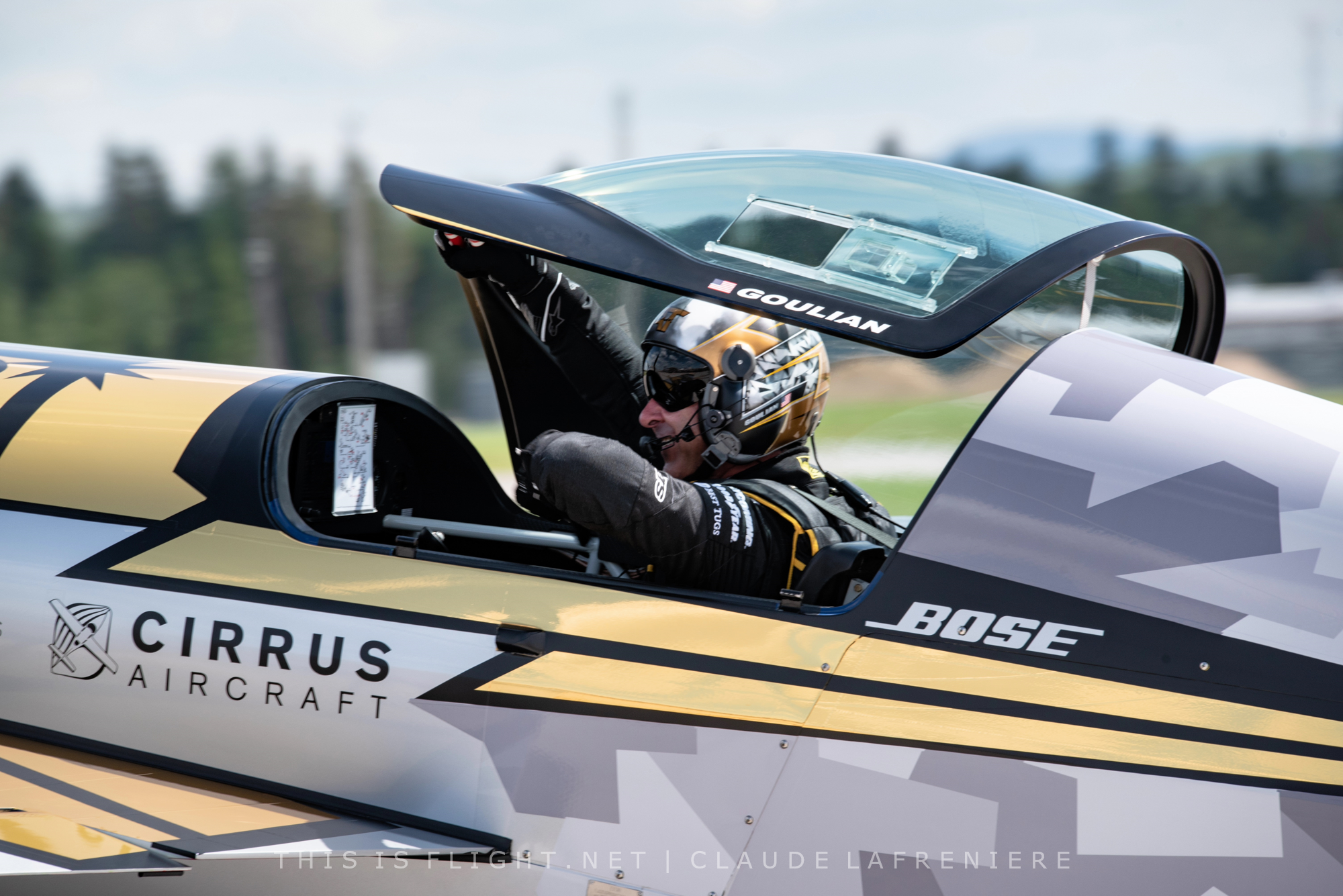 There were several civilian displays at  the show as well, including Michael Goulian flying his Extra 330SC, Canadian pilot Mike Tryggvason and the Canadian Harvard Aerobatic Team flying the T-6 Harvard Mk.II and Mk.IV. 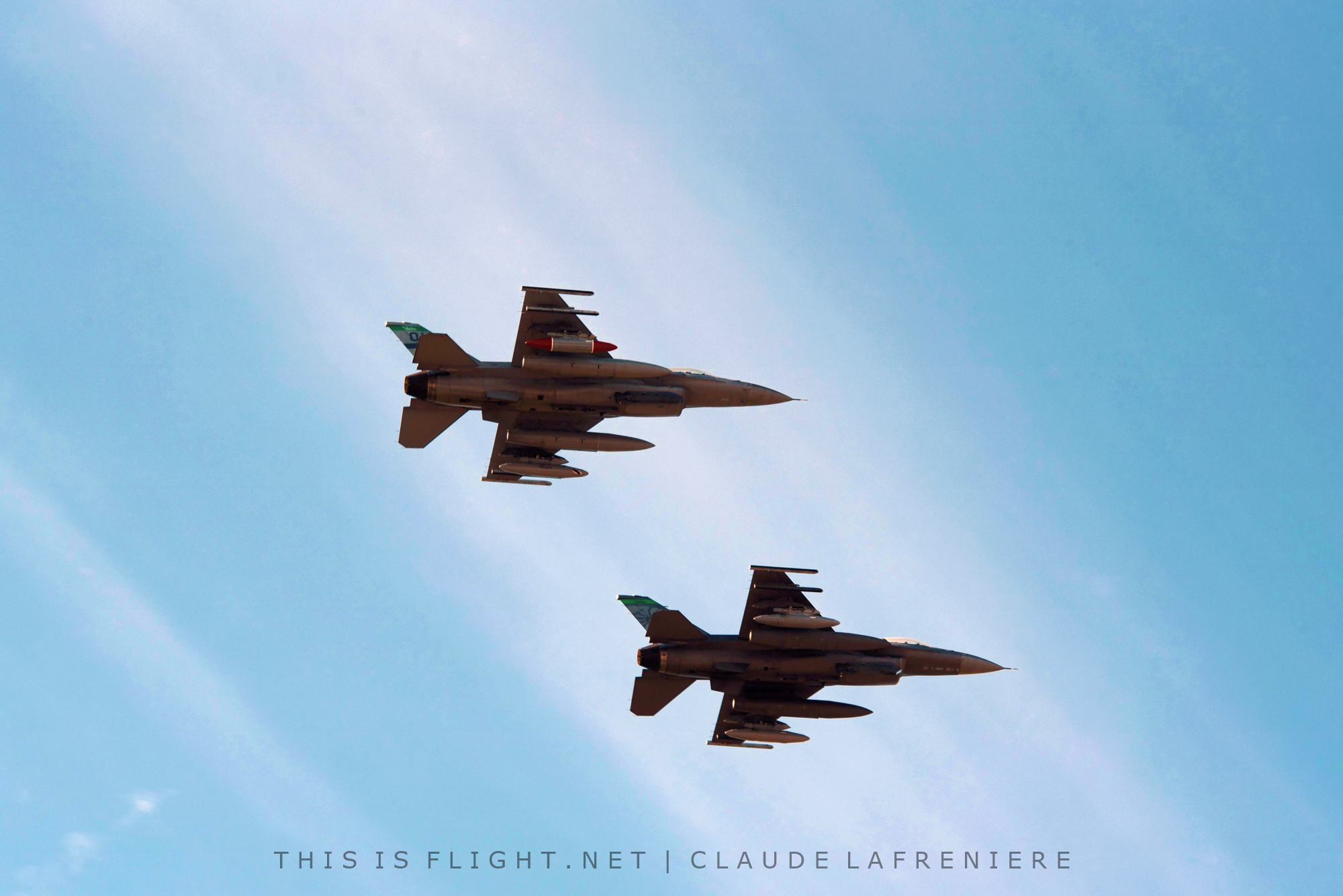 In all, SAIB 2019 was a great success, with a record crowd and a strong line up. This free event is accessed by one of the more well-organized shuttle bus service I have seen at an airshow. The good weather, polished organization and varied performer list ensured that all who attended went home satisfied.