The Singapore Airshow advertises itself as Asia’s “finest” aviation event. Our experience has been the antethisis of this: an event filled with frustrations, shortcomings and quirks. But there is no denying that the Singapore Airshow attracts some truly unique participants, whether it was the Smokey Bandits’ MiG-29s in 2012, the Black Knights in 2014, the Black Eagles in 2016, an RSAF F-15/F-16 three-ship in 2018 or August 1st and the F-35B in 2020. With this in mind, and after attending four editions of the event, these are our top tips to make your visit as bearable as possible.

Ticketing for the Singapore Airshow public days is refreshingly simple. Tickets must be purchased through Sistic (who, unfortunately, require the setting up of an account) either online or through one of their many offices in shopping malls around the city. Tickets at recent editions cost $22 SGD per adult (just under £13,  $19 USD or €14) and $9 per child. Parking is not included and is not available seperately. The only way to buy car parking is by purchasing a $166  a family ticket (two adults, two children and a car pass). 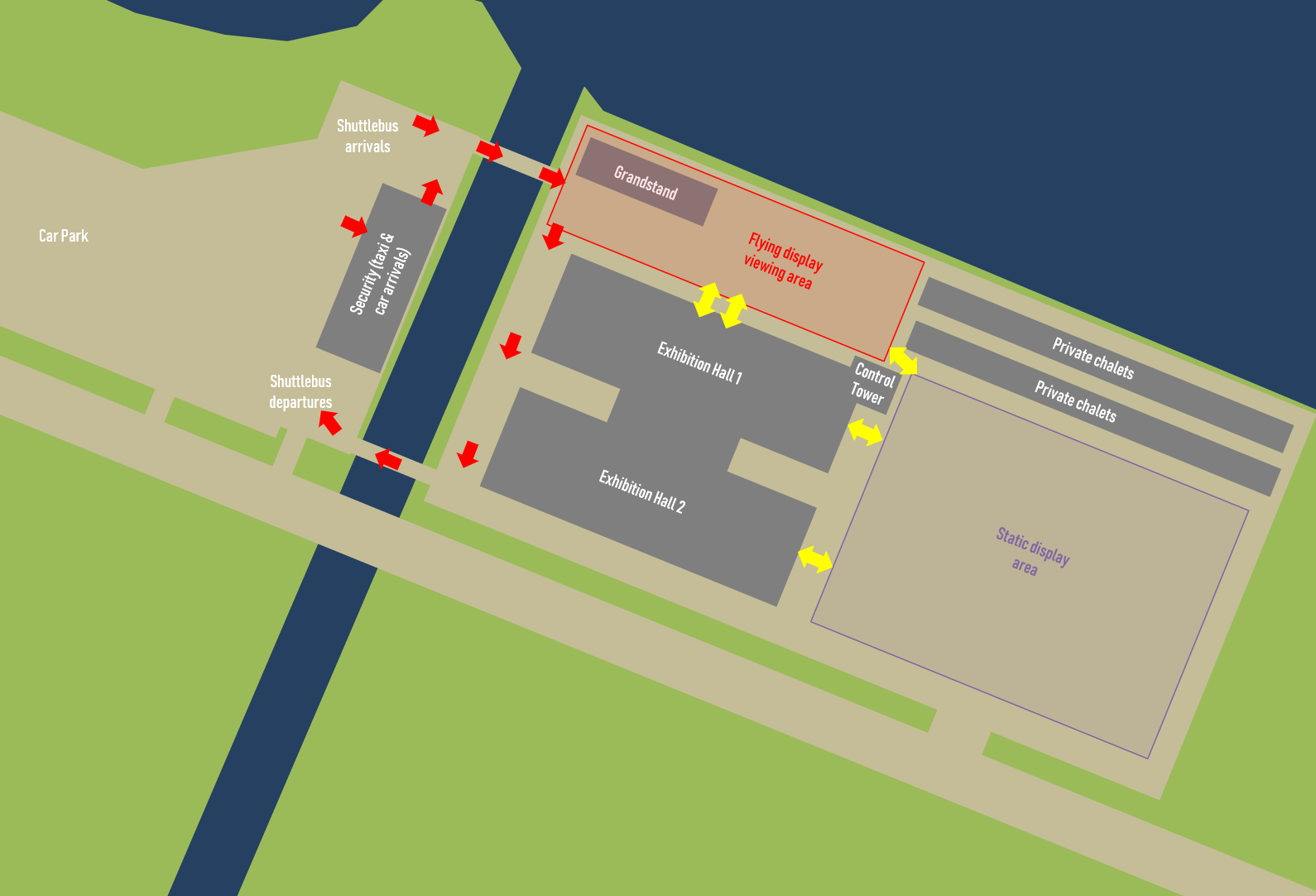 There are just a handful of possible viewing spots, thanks to the small size of the venue.

VIP BALCONY: This runs along the northern face of Exhibition Hall 1, and, as the name would suggest, it is mostly reserved for VIPs. However, on occasion, small sections of the balcony have been accessible during the public days. Look out for outside staircases either the side of the main doors of Exhibition Hall 1 and try your luck – sometimes they are cordoned off, and sometimes they are not. If the staircase is open, you will need to stake out your spot for a couple of hours before the air display starts, because this little sliver of balcony is just a few feet wide and gets very busy.

FLYING DISPLAY VIEWING PLAZA: This is where the vast majority of the crowd will watch from. The small grandstand at the left hand end is the prime spot, as it can be tricky to get a good view from ground level – many people use umbrellas to ward off the sun, while the organisers have errected a highly obstructive two metre tall fence and speaker tower along the front. Being as high as possible, or towards the back, is key.

STATIC DISPLAY AREA: Although it is further from the action, this could be the way to go. Largely devoid of people during the flying displays, this area offers a more distant, but less obstructed view of the flying and a far more pleasant atmosphere.

OFF-SITE VIEWING: The area around the Changi Exhibition Centre is tightly controlled and access either by car or on foot is nigh on impossible. The only possible viewing spot is from the far southeastern end of Changi Beach Park, near to Changi Ferry Terminal, about a mile west of the Exhibition Centre. The view from here, which looks down the A-axis, is badly backlit in the morning, and the flying is distant, but it is the closest that the public can get on the trade and practice days.

There are several small car parks for those arriving in their own vehicle, or it is possible to arrive by taxi (finding a taxi to get home again, even with ride hailing apps, can take a while, though). Alternatively, Changi Village is a 3km walk away, and is served by regular buses to Tampines MRT station.

Singapore Changi Airport is located next to the airshow site, and is home to a limited number of hire car companies and an airport hotel. It is also connected to the island’s bus and MRT rail networks.

Those with car passes can use the event’s on-site car park. Plan for limited traffic disruption, but it would be unusual to be held up for more than about 20 minutes while driving towards the show. With only one road in and out, beware that access is tightly controlled and it is not possible to get close to the show site in a private car without a car pass. There are no alternative parking options nearby.

Taxis in Singapore are relatively cheap, and various ride-hailing apps are available, with Grab being the most widely used. There is a dedicated pick-up/drop off point at the airshow. Beware that it is not possible to pre-book a taxi to leave the show; visitors must queue at the taxi rank. Queues can sometimes last several hours, and a $10 surcharge is levied on visitors departing by taxi.

It is hardly surprising, given Singapore’s low car ownership, that most people use public transport to get to the show. The airshow runs a free shuttle bus from Expo MRT station, with a journey time of 25 minutes and departures every few seconds. Beware that security screening takes place before boarding, and as such, the queue to board a bus can sometimes take several hours.

Expo can be reached using the island’s cheap and highly efficiant MRT train system. Take the East-West Line (green) to Tanah Merah, changing to a shuttle service to Changi Airport. Alight after one stop at Expo MRT. Alternatively, use the newer Downtown Line (blue): Expo is the eastern terminus.

We have found that by far the best way to get to and from the airshow is to use a clever combination of taxis, buses and trains. To arrive at the show site, use a taxi (perhaps after first taking a train to a nearby station, such as Expo, Tanah Merah or Pasir Ris, if you are cost-concious). This bypasses security queues at Expo, as car/taxi arrivals use a seperate, underutilised security checkpoint at the venue itself.

On departure, to avoid the long queues and taxi surcharge, use the airshow shuttle bus. A big queue traditionally forms immediately as the flying display ends, so we suggest watching the afternoon flying display from the left hand end of the viewing plaza, and bolting for the bus queue the moment it’s over. Time it right, and it’s possible to be speeding away on the shuttle bus within five minutes of the last manoeuvre being flown. Time it wrong and end up at the back of the queue, and you could be waiting for an hour. Alternatively, stick around for a few hours after the flying display ends on Sunday as you wait for the bus queue to shorten; the showground tear-down and the departure of static display aircraft begins before the showground closes, and this can make for an interesting sight.

Singapore is a compact but extremely populated and cosmopolitan city with hotels to suit all tastes and budgets. In most cases, prices and availability are not affected by the airshow. There are too many choices to list, but a hotel close to a train station (particularly on the eastern arm of the East West Line or Downtown Line) will be particularly convenient for airshow attendees.

Arrivals for the Singapore Airshow typically begin around one week in advance. Military arrivals generally use Changi East air base (Changi Airport Runway 02R/20L). The land around Changi East is mostly undeveloped and is used by the military so it is not generally possible to get more than a cursory glance at any arriving or departing aircraft.

Practice displays begin around five days prior to the start of the show. Because Changi Airport must close to traffic during the air displays and rehearsal sessions, timings are published several weeks in advance by the Civil Aviation Authority of Singapore. A distant view of the rehearsals can be found in the vicinity of Changi Beach Park (see Site map & viewing spots), but the spectacle is so much diminished from this distance that the rehearsal sessions are not generally worth attending.

The Singapore Airshow is not an event created with the public in mind, and is in the most part a trade exhibition. As such, the flying displays are short and often cannot fit every performer in a single day. It is also common for aircraft to arrive and participate in the first two or three days of the show, but leave before the event opens to the public. This is particularly true of Airbus and Boeing airliners both in the flying and static displays.

As such, the flying display varies a lot between days – although, luckily, the intended schedule is usually published several weeks in advance. There can be a big difference between the first and second public days, with the Saturday generally seeing more flying than the Sunday. At the 2018 show, the first public day saw a full hour of flying by a large variety of aircraft, while Sunday visitors, who paid the same ticket price, found out the week before the show that they would only be seeing four performances. If you only plan to attend on one day, hold back on purchasing your tickets to the show: there are no earlybird offers and tickets rarely sell out. Waiting for the daily schedule to be released before deciding whether to buy tickets for Saturday or Sunday might avoid a major disappointment.

Although Sunday usually has the shorter of the two weekend flying displays, one benefit to attending on Sunday and staying on late until the showground closes is that many of the static display aircraft will leave during this time, particularly airliners and business jets. The aircraft are generally moved under tow through the static display area, with spectators being asked to move aside to let them pass – a sight worth sticking around for.