The Imperial War Museum at Duxford is one of the largest and best-known aviation museums in the world, but the airfield is probably best known for its major annual airshows. Although no longer the host of Flying Legends, the museum holds three two-day weekend airshows each year, as well as around ten smaller “Flying Days”.

While it’s probably fair to say that Duxford has lost some of its charm in recent years, due to a combination of the “festivalisation” of its airshow calendar and tighter airshow regulations imposed since 2016, it is also impossible to deny that many of the world’s greatest airshow moments of the last few years have happened here – perhaps most obviously their enormous formations of Spitfires.

Duxford’s major weekend airshows typically fall in late May, mid-July and late September. One of these airshows traditionally has an “air festival” theme, featuring broad array of civilian displays, as well as several warbirds and military types. The September show is usually focussed on the Battle of Britain. The July slot was previously occupied by Flying Legends, and we are still waiting to see what Duxford’s event calendar will look like post-pandemic.

Due to the large crowds and lengthy flying displays (typically running from lunchtime until around 5pm), it is not possible to fully explore the museum on airshow days.

Of the museum’s smaller events, of most interest to aviation enthusiasts are Flying Days (formerly known as Showcase Days). These one-day mini-airshows, held several times throughout the year, focus on aircraft based at Duxford. Flying Days attract small crowds, typically up to 4,000 per day rather than the 10,000 per day expected at a fully-fledged airshow, and they are designed to allow time to explore the museum, with flying taking place over around an hour in the early afternoon. Flying Days are sometimes held in conjuction with other events, such as classic aircraft fly-ins and general aviation expositions.

The Imperial War Museum offers a membership scheme, starting at £60 per year (or £114 annually for families), which includes free unlimited access to its museum sites, including for Flying Days at Duxford; if you plan to visit IWM’s paid sites more than three times in a single year (including IWM Duxford, HMS Belfast and the Churchill War Rooms), one-year membership will leave you in pocket. Across a single year, membership will grant you access to up to ten Flying Days as well as airshow practice days, all for less than double the cost of a single standard airshow ticket! Membership will also entitle you to priority booking for Duxford Airshow tickets, with a 10% discount.

In previous years, the optional Flightline Experience (a chance to get slightly closer to the air display aircraft) cost an additional £5. This is now included at no extra cost.

Pre-pandemic, several other additions were offered:

It is likely that these options, or similar ones, will return after the pandemic has subsided.

Airshow tickets must be purchased in advance. 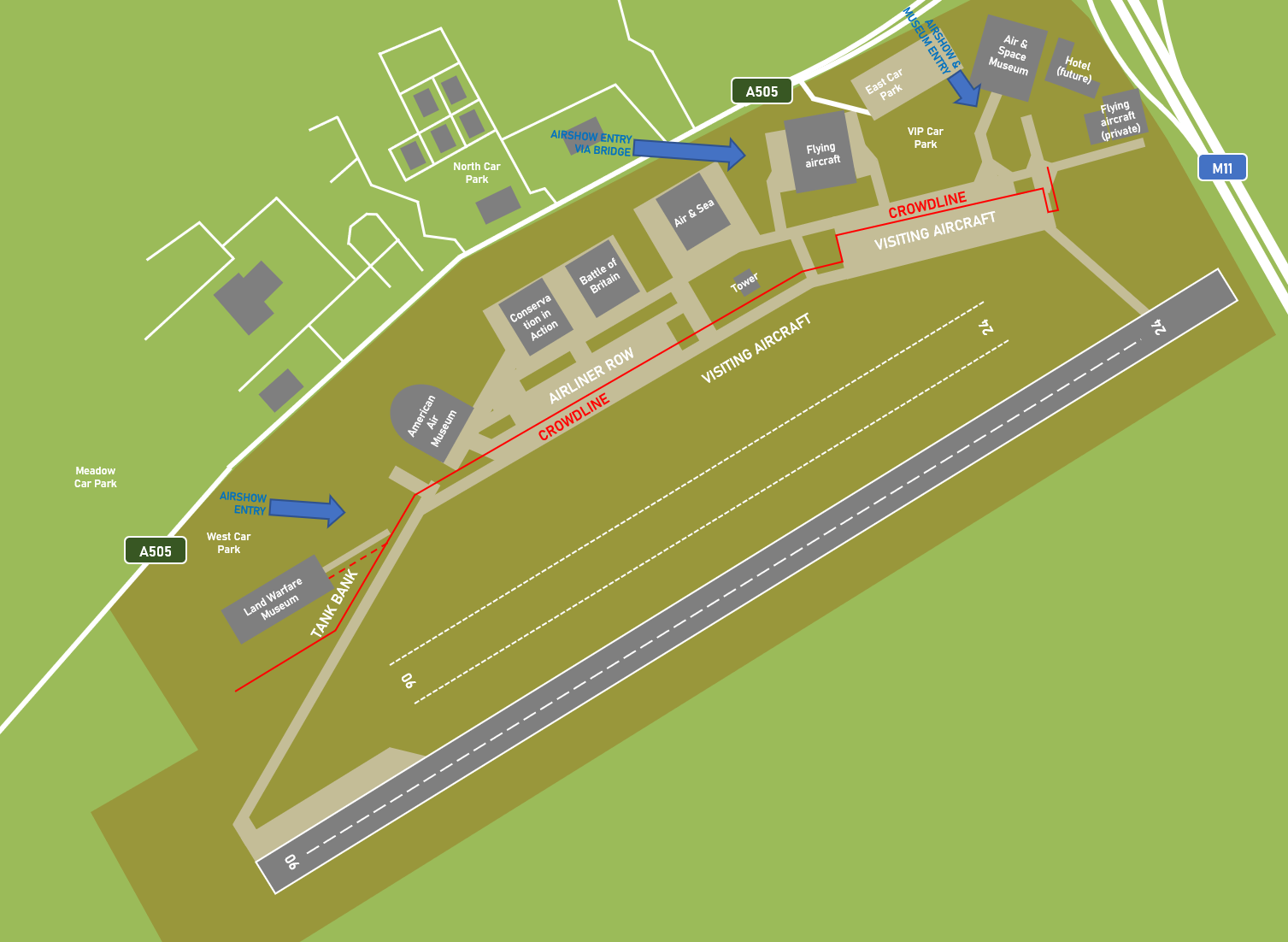 Duxford’s crowdline is reasonably long and offers several different viewing opportunities. Below, we have outlined four of our favourites.

SHOW CENTRE: The show centre datum point is usually the control tower. Being in the middle of the showground, this is the ideal place to watch the formation teams perform. Being close to the flightline, it also offers views of aircraft starting up and shutting down. However, beware that, because of the shape of the crowdline, this area is further away from the display line than the rest, and a long lens is required for photos. 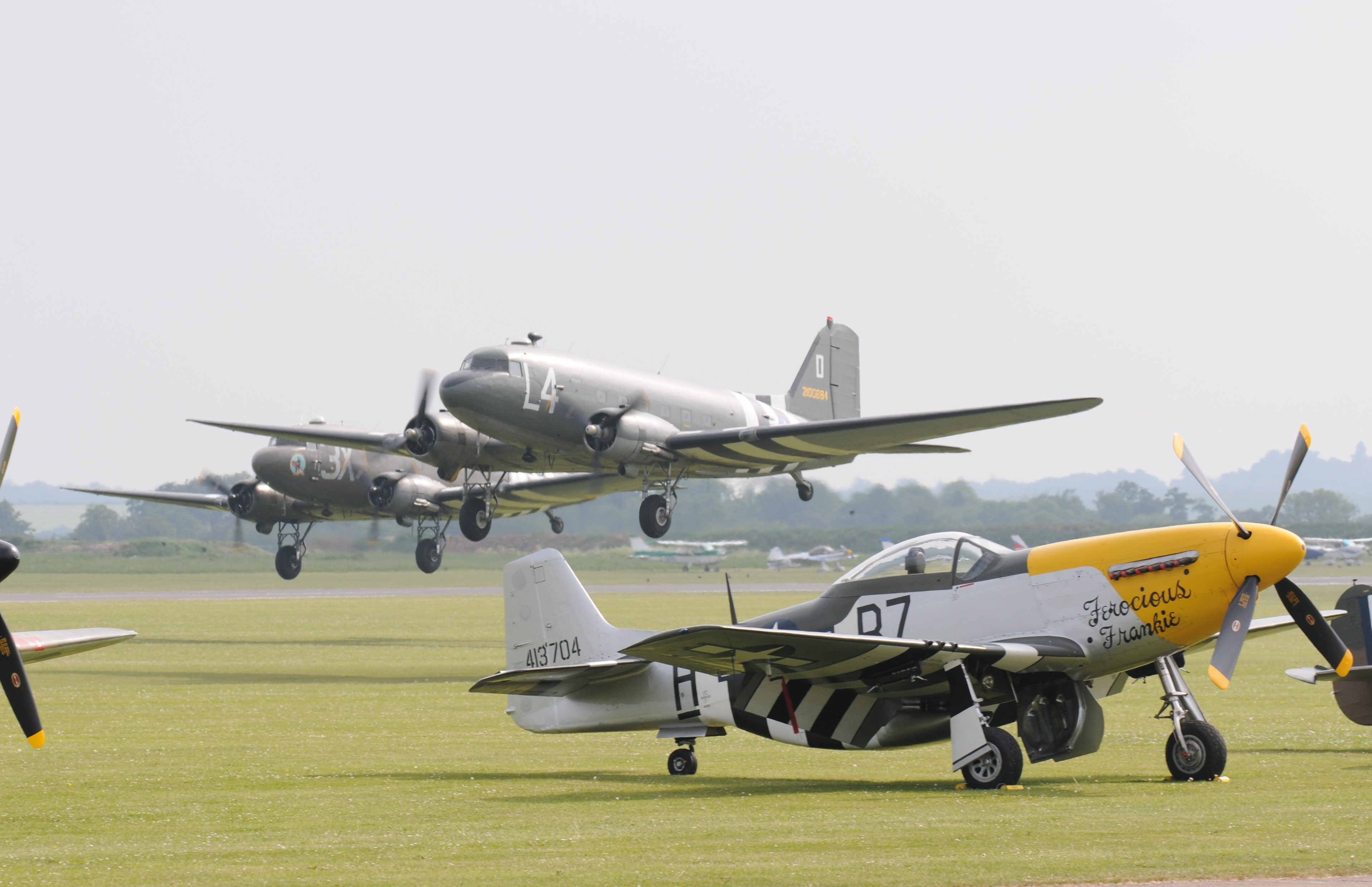 From here, the flightline is in the foreground. Photo: Jim Lucas 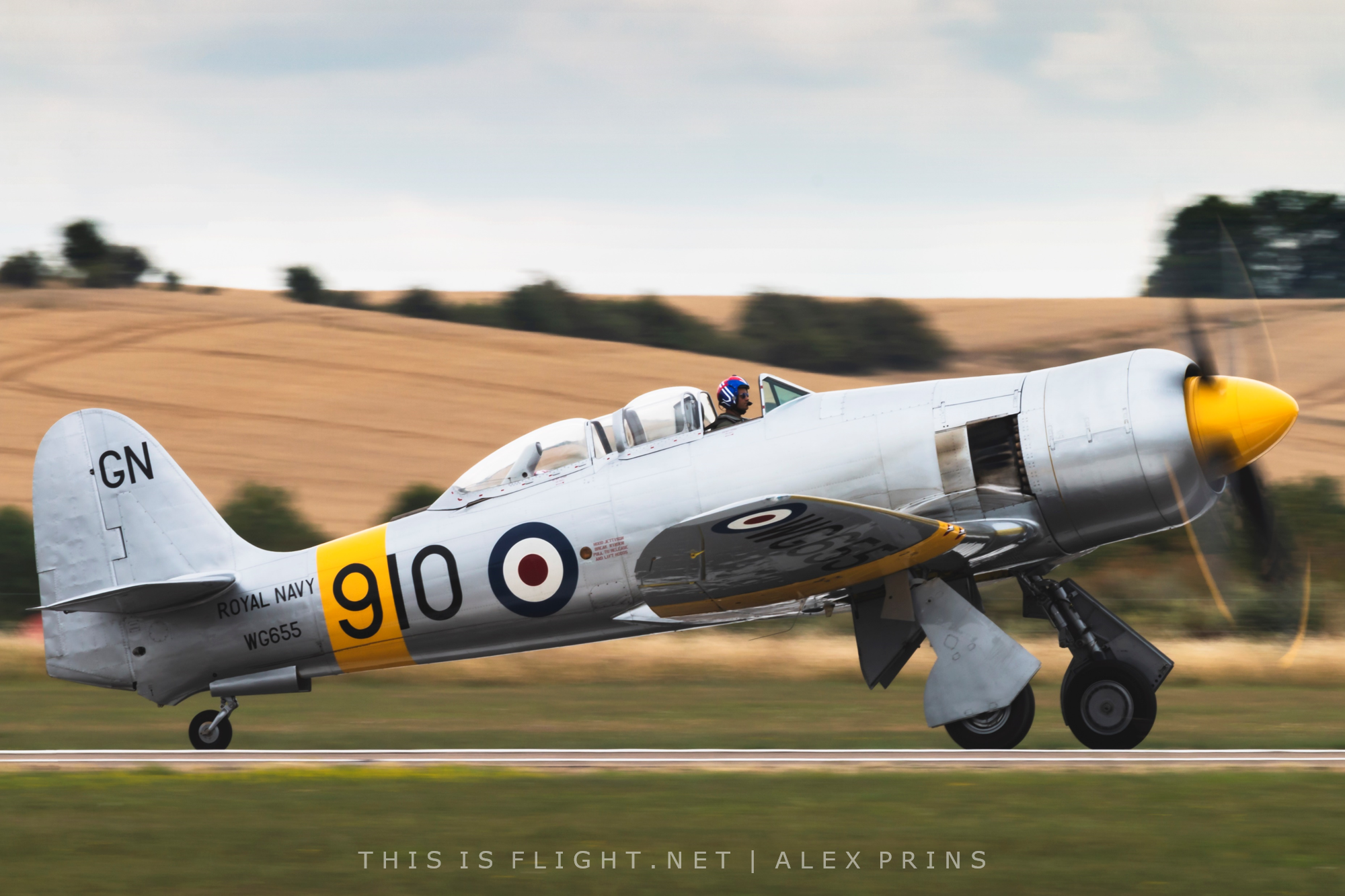 The hard runway is quite distant from show centre, but take off shots are still possible. Photo: Alex Prins

EASTERN END: Often known as the M11 End, this area is popular because it is slightly closer to the display line than the middle of the crowdline. Display aircraft often make sweeping topside passes around the end of the show line, and this is a prime space to watch them.

WESTERN END: Known as Tank Bank, the elevated area next to the Land Warfare Museum is open at most airshows. As well as being the closest it is possible to get to the display area, Tank Bank is also popular because it offers marginally more favourable lighting conditions, the chance to shoot topside passes around the end of the display line and a slightly elevated view that looks down on the main taxyway. The bank is also very close to the flight path for aircraft using the grass runway, and offers head-on views of take-offs on Runway 24. 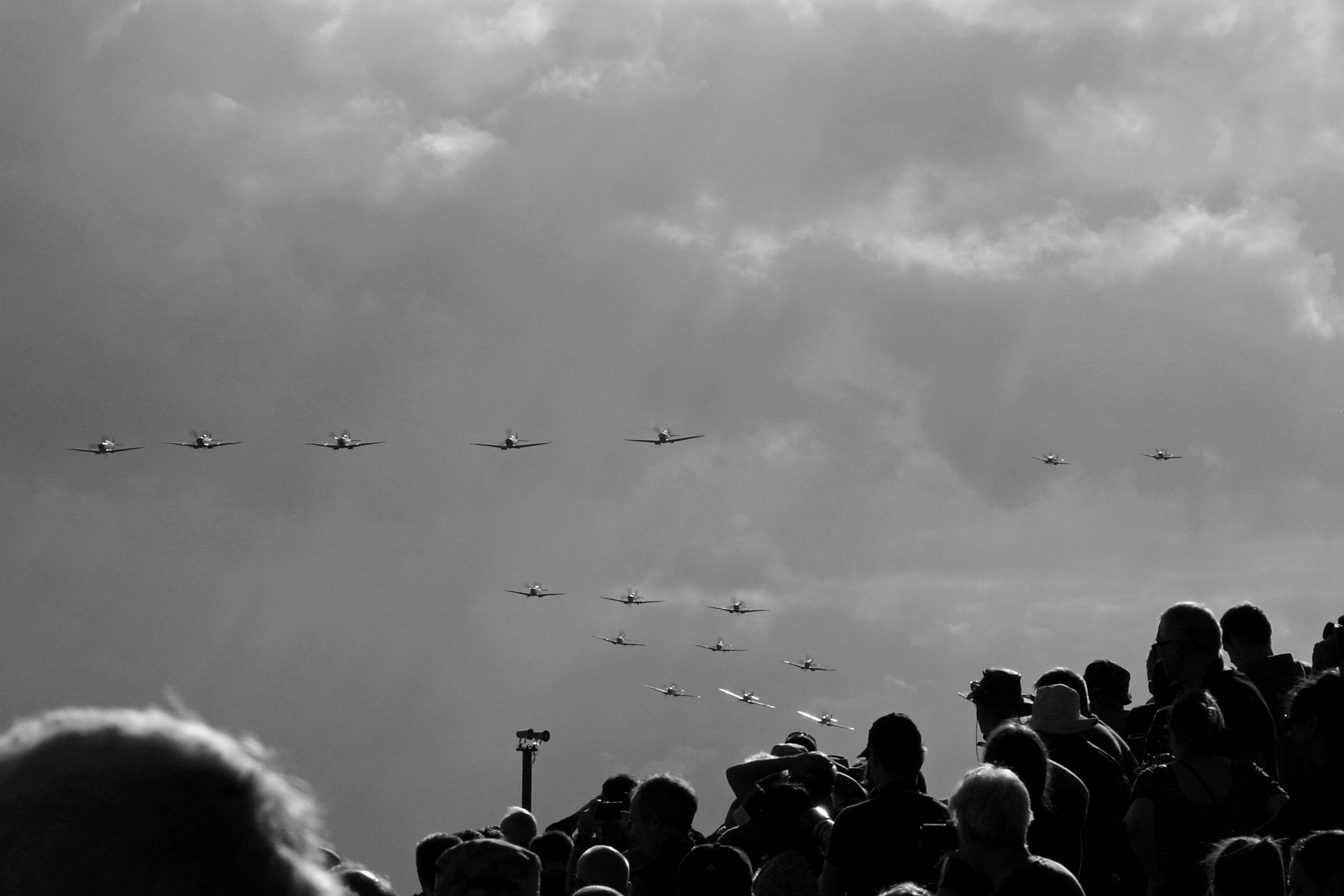 Spitfires roaring over Tank Bank – the closest that spectators can get to the action. Photo: Roy Gore

FLIGHTLINE: Open during the morning, but closed during the main flying displays, the Flightline Experience allows spectators to get “airside”, a little closer to the line of visiting and participating aircraft. 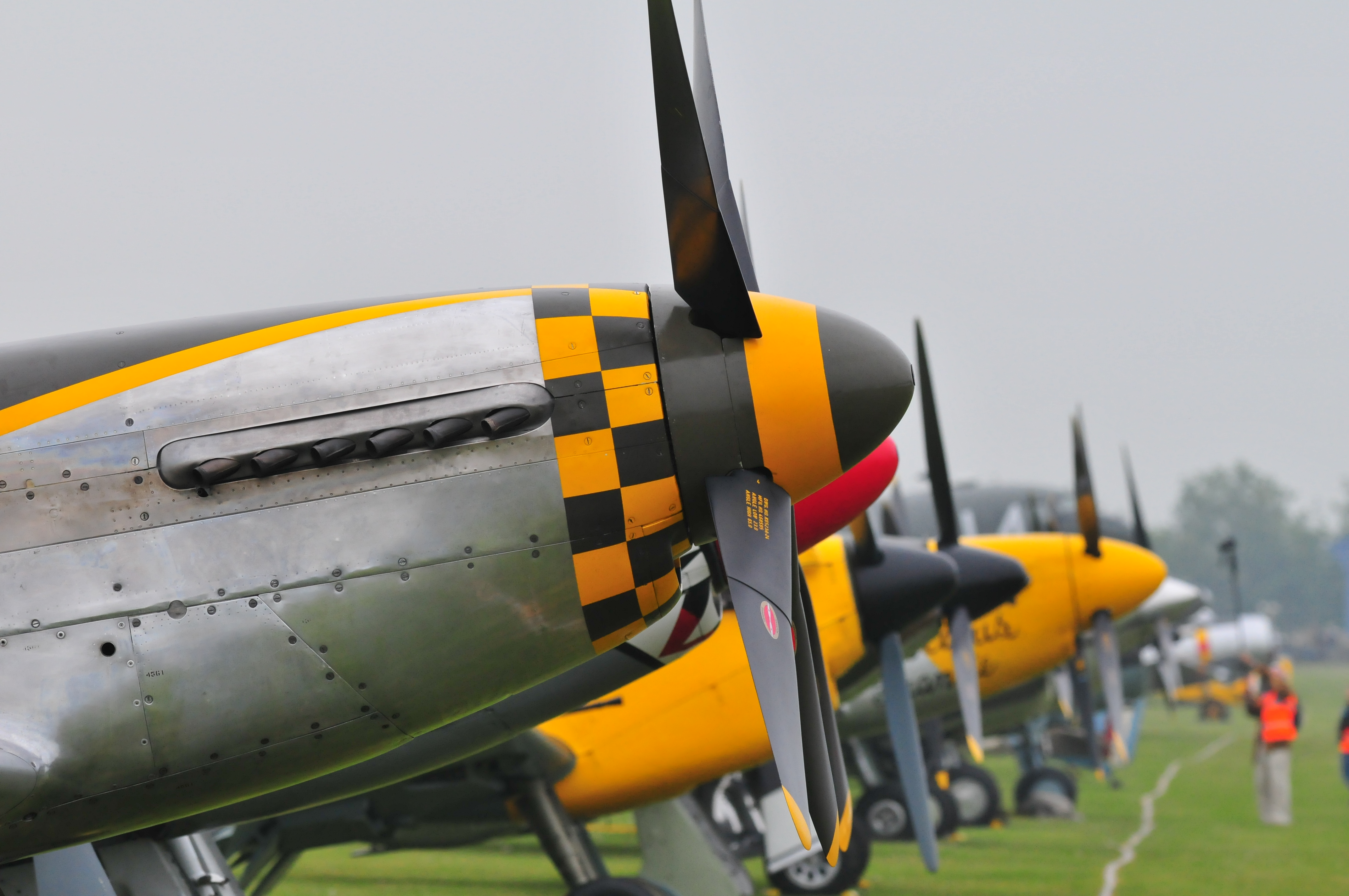 Warbirds lined up on the flightline, as seen during the Flightline Experience. Photo: Jim Lucas

OUTSIDE THE AIRFIELD: Watching the airshow from outside the airfield is strongly discouraged at Duxford and the police have been known to remove secondary spectators. There are now no suitable viewing areas outside the airfield that offer a good view of the flying while still being accessible to the public.

All of London’s commercial airports (Heathrow, Gatwick, Luton, Stansted, Southend and City) have good rail connections, airport hotels and plentiful hire car facilities. The closest airport is Stansted, which is less than a half-hour drive from Duxford. Stansted Airport is also connected to both Whittlesford Parkway and Cambridge by direct trains.

Most visitors choose to drive to IWM Duxford, which is conveniently located on the junction of the M11 and A505. The airfield is approximately a one-hour drive from north London, 45 minutes from the Luton area, and 20 minutes from Cambridge. Although congestion is to be expected on the A505, especially at the end of an airshow, the event’s proximity to the M11 means queues are rarely very lengthy. On Flying Days, there is no noticable traffic build-up.

Free parking is available in the East Car Park on Flying Days and non-event days, while on airshow days, a £5 car pass is required, which must be purchased in advance. On airshow days, VIP parking is available within the museum site, in and around the East Car Park. Other drivers will be directed into either the North Car Park, from which the museum is accessed via a short walk over a footbridge, the West Car Park across the road from the Land Warfare Museum, and the West Car Park, located on the museum site, behind the American Air Museum (see Site map & viewing spots).

Although taxis and minicabs are expensive in the UK, it is possible to use them to visit Duxford on non-event days and Flying Days. As Duxford is located several miles from the nearest town, it would be sensible to book these in advance.

The museum is accessible by public transport, with the nearest train station being Whittlesford Parkway. Whittlesford Parkway is served by half-hourly Greater Anglia services between London and Cambridge, with tickets from London Liverpool Street starting at around £15 and the journey taking just under 90 minutes. From the station, it is a half-hour, 1.5 mile walk to the East Car Park entry gate, all on segregated footpaths, although walkers must cross two M11 slip roads – the most challenging part of the journey. It is uncommon to see visitors making this journey, although our reviewers recommend it.

For those wishing not to walk, free shuttle buses are laid on from Cambridge and Royston railway stations on airshow days. Cambridge is served regularly by Thameslink and Great Northern trains from St. Pancras International and London King’s Cross respectively (although both stations are connected), as well as Greater Anglia trains from London Liverpool Street, with a journey time betweeen 60 and 90 minutes. Royston is also served by Thameslink trains from St. Pancras and Great Northern trains from King’s Cross. From 2023, all services will be operated by Great British Rail.

Airshow shuttle buses pick up passengers from Cambridge and Royston from 8:30am to 1:30pm, and return to the station between 3:30pm and 6:30pm, operating from the East Car Park. This service is both popular and highly reviewed, but we are yet to test it out.

Those wishing to avoid the walk on non-airshow days can use the area’s regular bus network. The museum is served seven days a week by the 132 bus from Cambridge, and Monday to Saturday by the 7A bus from Whittlesford Parkway. Both services run every two hours, stopping by the East Car Park. Due to the low frequency of these services, we don’t particularly suggest relying on them. You should check the timetable while planning your day if you intend to use public buses.

Duxford is close enough to London that there is an abundance of accomodation options in surrounding Home County towns and cities. Those travelling by car will find the journey perfectly doable places, such as Bedford, Stevenage, even over several successive airshow days. Similarly, those travelling on public transport can travel to Duxford easily from any town that has good transport links to Cambridge or north London.

There will, in due course, be a luxury hotel on the airfield, next to the Air Space Hangar, for those who wish to be even closer to the action – but this is likely to charge very high prices on event days.

Because of their modest size and reliance on Duxford-based aircraft, there is not usually a formal arrival/practice day, and most visiting aircraft will fly into Duxford on the morning of the show.

Duxford is a hub for historic aircraft and display pilots, so visitors to the museum are likely to see interesting movements on any summer day, weather permitting. This will include the occasional display practice. However, on the eve of a major airshow, there is a noticable uptick in activity and a smattering of display practices are to be expected. The museum will be open as normal on these occasions. 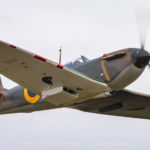 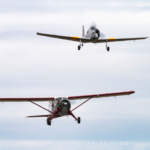 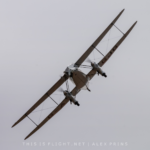 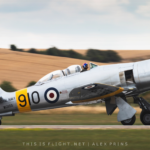 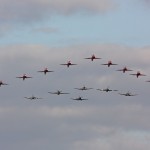 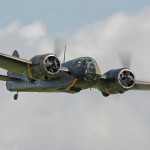 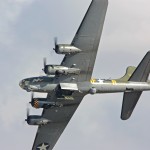 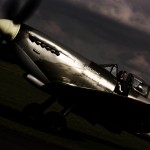 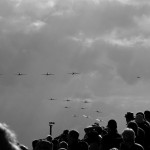 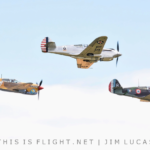 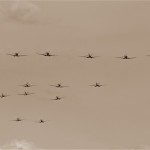 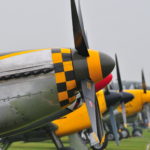 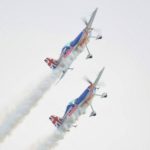 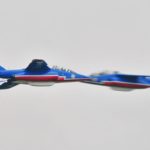