WONJU | The Republic of Korea Air Force’s Black Eagles have put the coronavirus pandemic to good use, developing a series of stunning new manoeuvres not performed by any other aerobatic team. 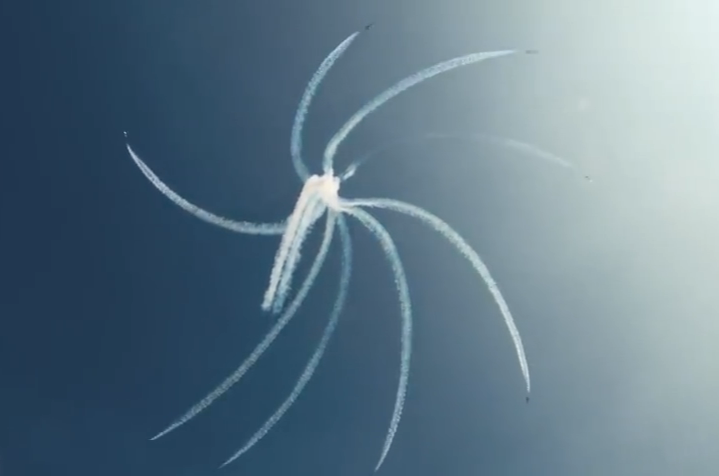 The coronavirus pandemic has given the team an extended training period, which they have used to redesign their display routine and developing four stunning new moves. The updated show was perfomed for the public for the first time in October 2020, as coronavirus restrictions in the country were eased.

The first of four new manoeuvres is the Vortex (see below), which replaces the Box Break, and sees four aircraft approaching the crowd in card formation before dramatically rolling across each others’ path to swap sides of the formation. The jets then quickly transition to trail formation and pull away from the spectators.

Later in the show, the Gourd Bottle has been replaced with the Clover Leaf Cross. The move traditionally saw six aircraft perform a loop far in front of the crowd before splitting into two elements, after which both then repositioned to fly in opposite directions down the display line. The aircraft now split while pulling up into the loop and cross dramatically as they complete the manoeuvre. Lasting around 30 seconds, the Clover Leaf Cross takes only half the time of the Gourd Bottle, and takes place closer to the crowd.

Also gone is the Cross-Break, a flypast from crowd-rear followed by two-ship opposition break. This has been replaced by a third new move: Rock and Roll, in which one jet performs slow aileron rolls down the display line and a second barrel rolls around it. After passing the crowd, the old Cross-Break ends the manoeuvre. As well as being more spectacular, the removal of any crowd overflights makes the team’s show more compliant with other countries’ airshow regulations.

Finally, the team’s traditional landing break has been improved significantly. After performing their usual downwards bomb burst directly above the airfield, the eight jets now enter incredible turning descents as they fan outwards – a concept never seen from a major jet team before. The new manoeuvre (see below) retains the name Tornado Landing.

As well as the four new manoeuvres, others have been substantially tweaked. There is now greater use of coloured smoke throughout the show, opposition passes have been modified to make them more photogenic, formation loops at the start of the show have been repositioned closer to the spectators and the Rollbacks have been changed up, with the second pair of aircraft starting their rolls while the first are still inverted, making for a dramatic photo opportunity. The Max Manoeuvre solo display at the end of the performance has also been improved: previously featuring a high-G turn and a loop, it now comprises a more sophisticated half vertical eight and spiral dive back towards the crowd.

All of the Black Eagles’ crowd-favourite manoeuvres remain in the show, such as the Dizzying Break, Rainfall, Two Ship High-Alpha and Loop, and the Taeguek, which sees a pair of jets drawing the national symbol of Korea in the sky with their smoke trails.

The Black Eagles are recognised as one of the world’s premier aerobatic display teams, and fly the locally-produced T-50B Golden Eagle. They have performed internationally in the UK, Malaysia and Singapore, but their updated routine is yet to be performed for an international audience.