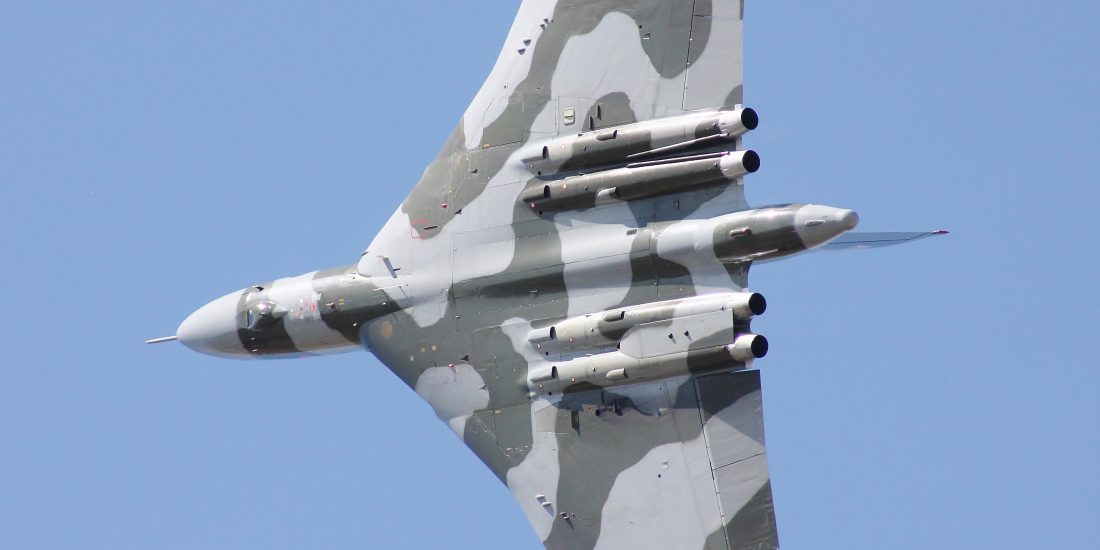 Yesterday afternoon, with one last thunderous roar of its four Rolls-Royce Olympus engines, Avro Vulcan XH558 touched down at Robin Hood Airport for the final time, where it will form the centre of a new academy to educate the “next generation” of engineers. For the last 7 airshow seasons the Vulcan has enthralled millions of people around the UK, and has certainly come to embody ‘The Spirit of Great Britain’. Since that historic first flight on the 18th of October 2007, we have been fortunate enough to have witnessed 228 flights, totalling 346 flying hours, along with 99 commentaries by Sean Maffet!

Few could have imagined in 1992 that after 8 years as the RAF’s Vulcan Display Flight aircraft, when XH558 appeared at Cranfield for its last public display, just 15 years later it would once more grace the skies of Britain. On the 23rd of March, after having been withdrawn from service, ‘558 made a short hop to Bruntingthorpe where it was taken into the care of David Walton. Fortunately, Mr Walton took the precaution of also buying all of the RAF’s spare parts, and kept it running at Bruntingthorpe’s Cold War Jets days.

In 1997 Dr Pleming approached Mr Walton with the aim of launching an investigation into the feasibility of returning it to flight. Incredibly, in September 1999 the most ambitious restoration in UK aviation history began, and following a much needed grant from the Heritage Lottery Fund in 2004, Vulcan XH558 took to the skies once again on the 18th of October 2007.

There have been many highlights over the last seven years of flight from the Vulcan; last year for example, saw a formation flight by XH558 with the only two airworthy Lancasters in the world, a sight that will never be repeated. And in this, XH558’s last airshow season, we have been treated to so many memorable moments. This year began with the ‘V Force’ Salute, which saw the Vulcan say goodbye to all of its remaining ‘companions’ from its Cold War days, and provided many with their last opportunity to see more than one ‘V force’ bomber at the same time. We have also been given a fantastic year’s airshow displays, with the “Vulcan Effect” in full force; almost every airshow that confirmed the Vulcan’s attendance sold out, with millions of people eager to see the ‘Tin Triangle’.

Many of us were also fortunate enough to have witnessed arguably the most vigorous Vulcan display pilot, Kev Rumens, fly possibly the most spirited display since XH558’s RAF days, during RIAT 2015’s Saturday show. That same weekend we were also treated to two very poignant flypasts with the Red Arrows, which was recently repeated at Southport Airshow, the final time that these two examples of British aviation will ever be seen together. Other notable formations this year have included: a flight alongside two Tornados, a ‘V-jet’ flypast with the Sea Vixen and two Vampires at Yeovilton, and a flypast with nine Spitfires and Hurricanes.

At this point it is necessary to thank those that have been pivotal in restoring and operating this extraordinary aircraft. Special mention should be given to Mr Walton for gifting the Vulcan to the VTST in 2005, and for having the foresight to buy all the spares required to keep it in the air once it got there. Then there is Dr Pleming who has taken a lot of criticism over the years for his management of the Trust, but without his initial determination we may never have seen ‘558 leave the ground. Sadly, Dr Pleming missed the Vulcan’s final flight as he is recovering in hospital following an operation on his heart – we wish him a speedy recovery!

More recently there have been the efforts of Engineering Director Andrew Edmondson and his team of engineering staff, along with Crew Chief & Chief Engineer Kevin ‘Taff’ Stone, the logistics and hangar team, the MA technicians, contractors and consultants, the volunteers that have helped man the stalls and the fundraising, and the crews that have flown this aircraft so magnificently. Finally, a huge thank you to each and every one of you that has donated to the Vulcan to the Sky Trust over the last ten years, it is your money that has kept the Vulcan where it belongs – the sky.

The plan for ‘558 now that it is no longer permitted to fly is for it to become the centrepiece in an aviation academy at former RAF Finningley – now Doncaster Robin Hood Airport, despite being composed largely of technology that is over 60 years old. It is proposed that it will also “fast taxi” once or twice a year for the public’s enjoyment; however the idea that in this day and age of intense security that occasionally the owners of a commercial airport will open its doors to the general public so that an old, outdated jet can blast down the runway a couple of times is preposterous.

The airport management has also been instrumental in enforcing a veil of secrecy over the final flights in a bid to keep away the crowds that were desperate for one last glimpse of the Delta Lady. Yet still, the Trust has decided that DRH is the best destination, despite the fact that viewing will be poorer for fast taxi runs than Bruntingthorpe or Elvington, both of which already run other Cold War Jets. Indeed “Brunty” would seen to be the ideal location to retire this incredible aircraft; it would have rejoined a host of other jets at the airfield’s fast taxi days, where the appeal already exists for the public. The location of Bruntingthorpe is also more central geographically than Robin Hood, so it would have been easier for those in the south to visit and enjoy the Vulcan once again, and the money that the Trust has left now that the has Vulcan has touched down for the last time could have been used to build some form of shelter for it. It would seem that despite being branded as an aircraft for “the people”, the Trust does not value their opinion at all, as for many years there have been complaints, and petitions to retire the Vulcan to Bruntingthorpe once again. 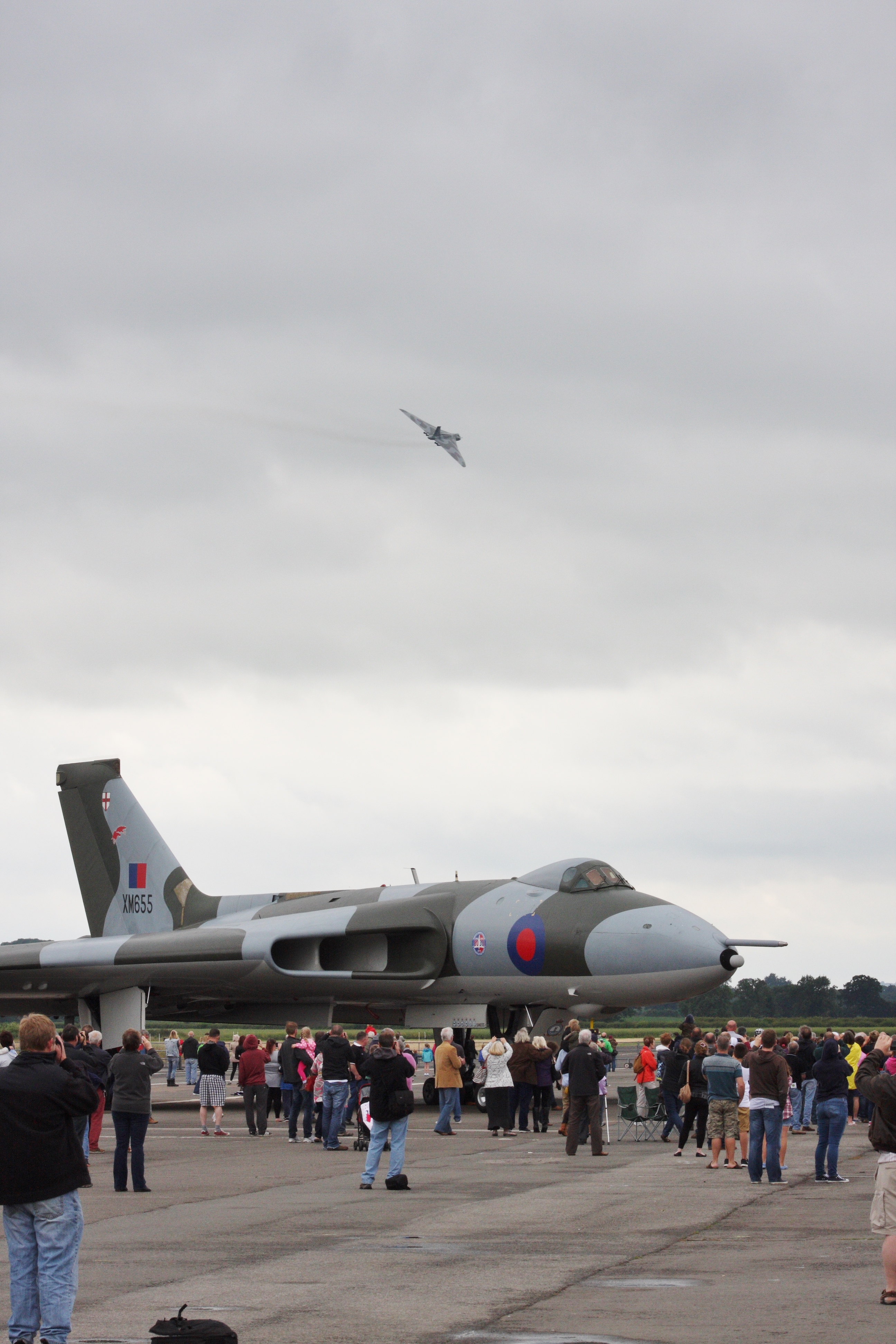 Two Vulcans together – XH558 flies over XM655 at Wellesbourne-Mountford during her farewell tour. Photo: Alex Prins

Many, including myself, feel that XH558’s retirement to DRH is a death sentence, as now that it is no longer flying ‘558 will be no more significant than any other Vulcan in the country. It will lose its support base as those that donated to see it fly will see no point in further funding, and when the owners of DRH one day come knocking to collect the hangar rental costs to find the Trust cannot pay, it would seem that this incredible piece of British engineering will be off to the scrap heap. The cost of moving XH558 to Bruntingthorpe or any other airfield by road when it becomes clear that DRH was a mistake will be prohibitively expensive and in all likelihood will reduce it to a static exhibition. I am incredibly disappointed that the Vulcan to the Sky Trust has not seen the error of its ways; my opinion, one that I share with many, is that XH558 should have been retired to Bruntingthorpe, where it was given its last lease of life. It is a shame that this decision seems not to have been made for the good of the people; those that have travelled across the country to see it or have waited with bated breath just to catch a glimpse of that unique delta-wing shape, seem to have been ignored, and regrettably I feel that the future of XH558 looks bleak.

However, whether or not you have agreed with the Trust and the way that it has operated XH558 over the last 7 airshow seasons, you cannot help but admit that the UK airshow scene will be poorer for the loss of this fantastic example of British ingenuity and engineering magnificence. There are thousands of people nationwide who will have had no previous interest in aircraft or airshows, who have been enchanted by the Vulcan’s distinctive appeal. Indeed, some of my happiest experiences at airshows so far have been watching and marvelling at the Vulcan, a living, breathing example of Cold War brute force; and whilst many amongst us worry for XH558’s future as a relic in a commercial airport, we must focus on the many happy memories that we have been left with. 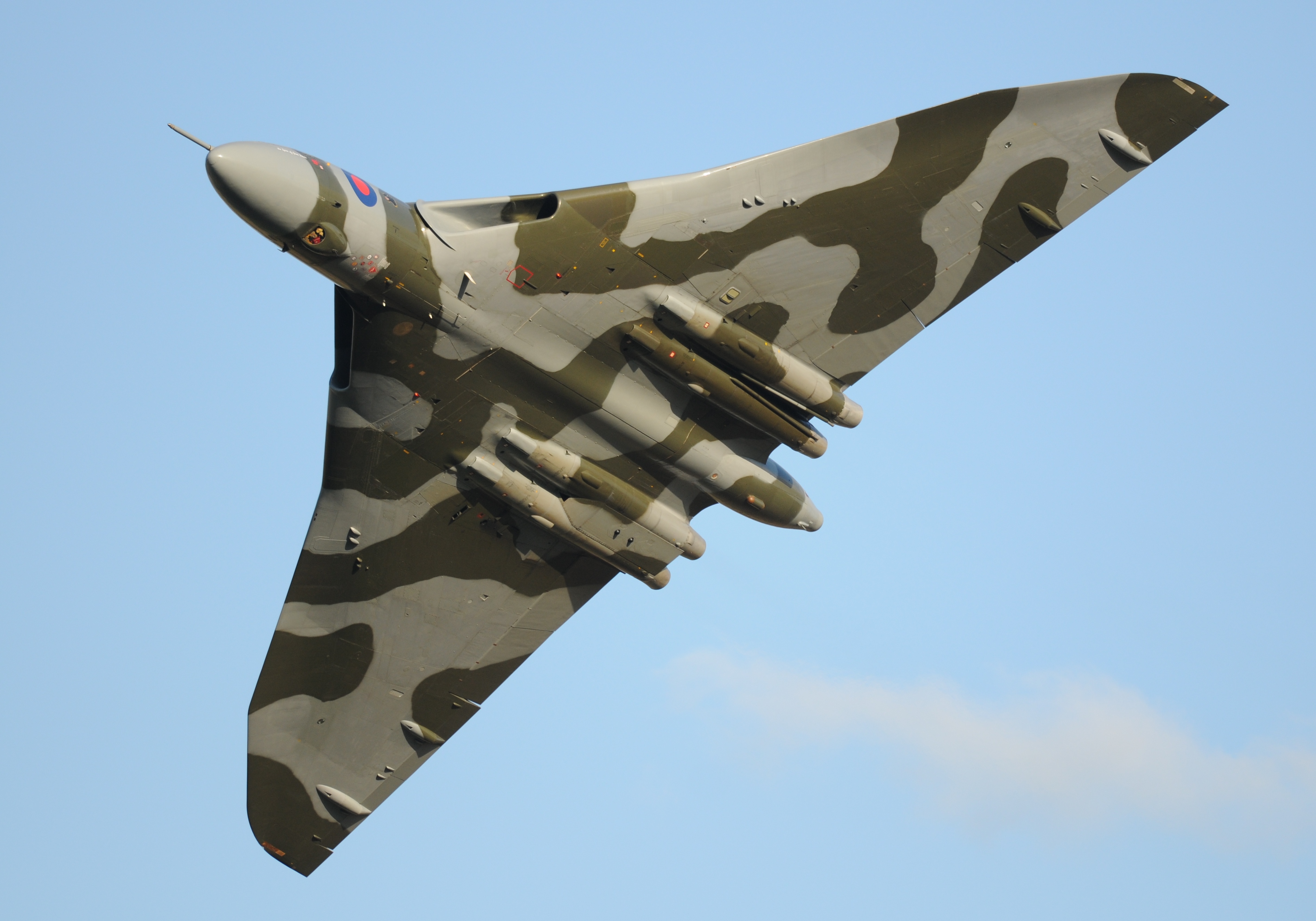 I’ll end this feature with a very apt quote by Dr Seuss that you may have heard the esteemed Sean Maffet use during his commentaries for the Vulcan display:

“Don’t cry because it’s over, smile because it happened.”

Farewell old friend, you will be sorely missed…